Rating - 0%
0   0   0
I always had a thing for the cwc frame with the upswept chain stays and have been on the hunt for one with a seller willing to ship it downunder. A month ago this one popped up at a reasonable price and I grabbed it. It was later than I would have liked but the seller came across well and the bike looked original and not messed with.

It is one of 2 similar bikes that came from the same family. The black bike went to a new owner in Puerto Rico. 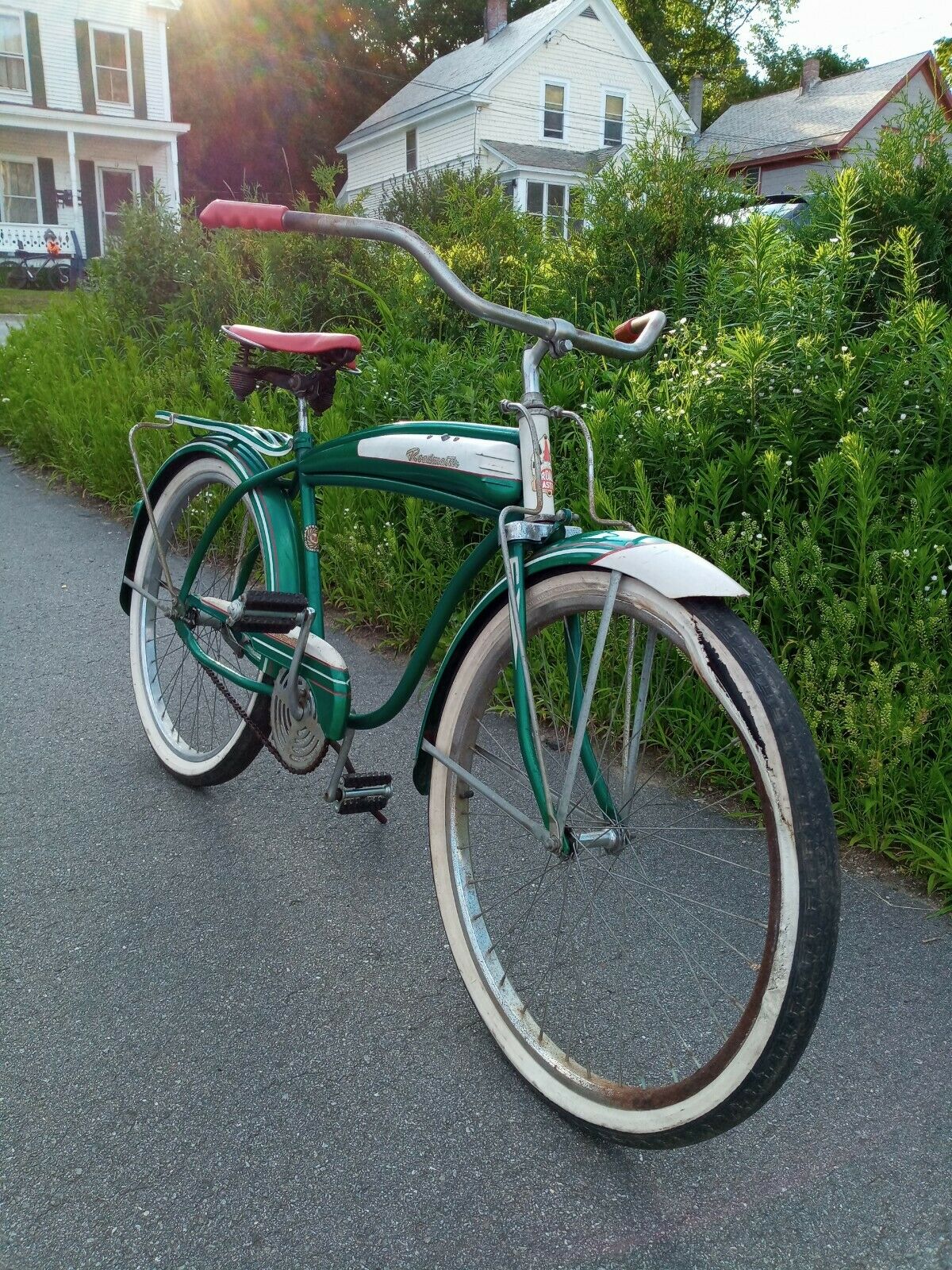 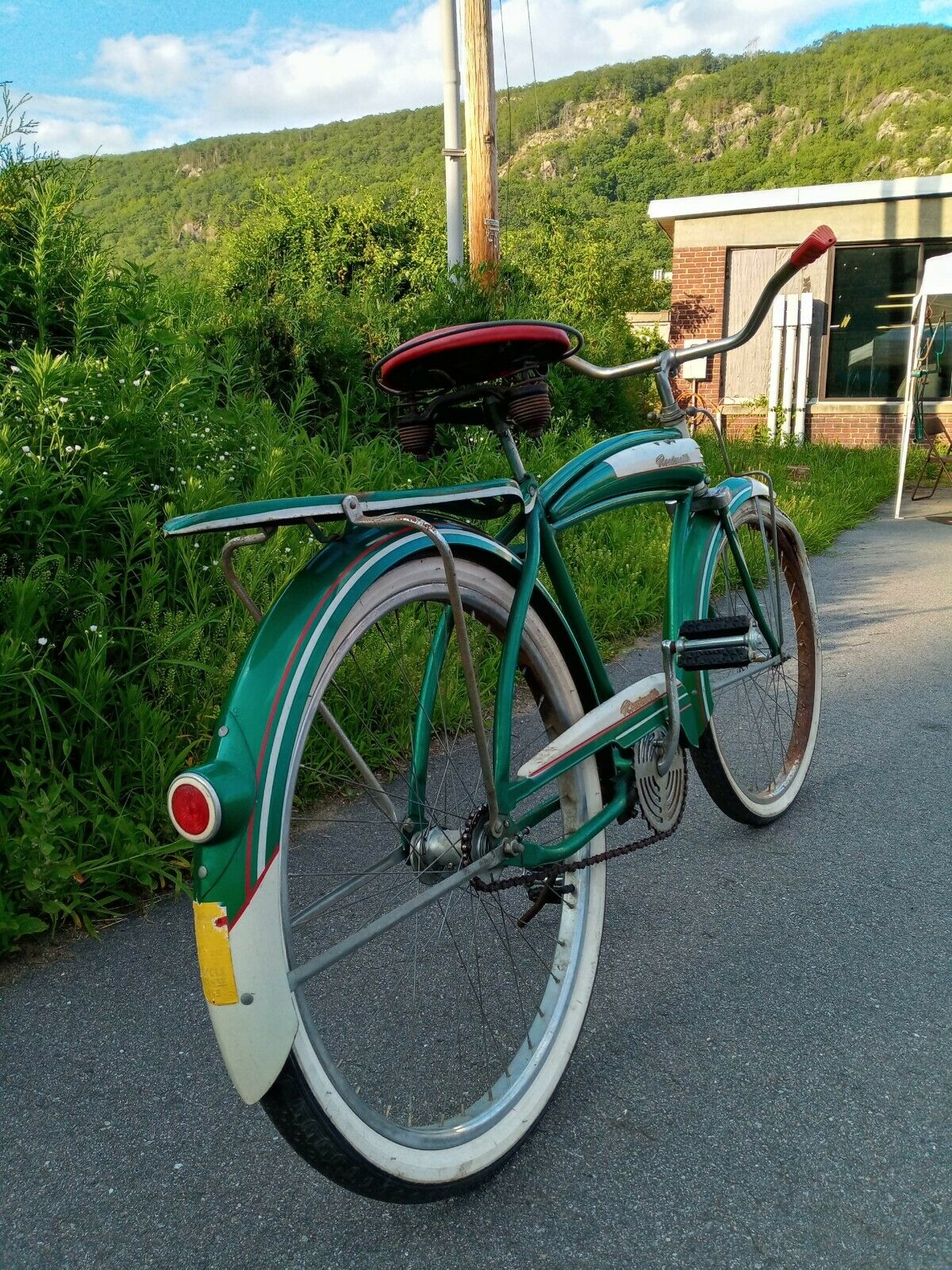 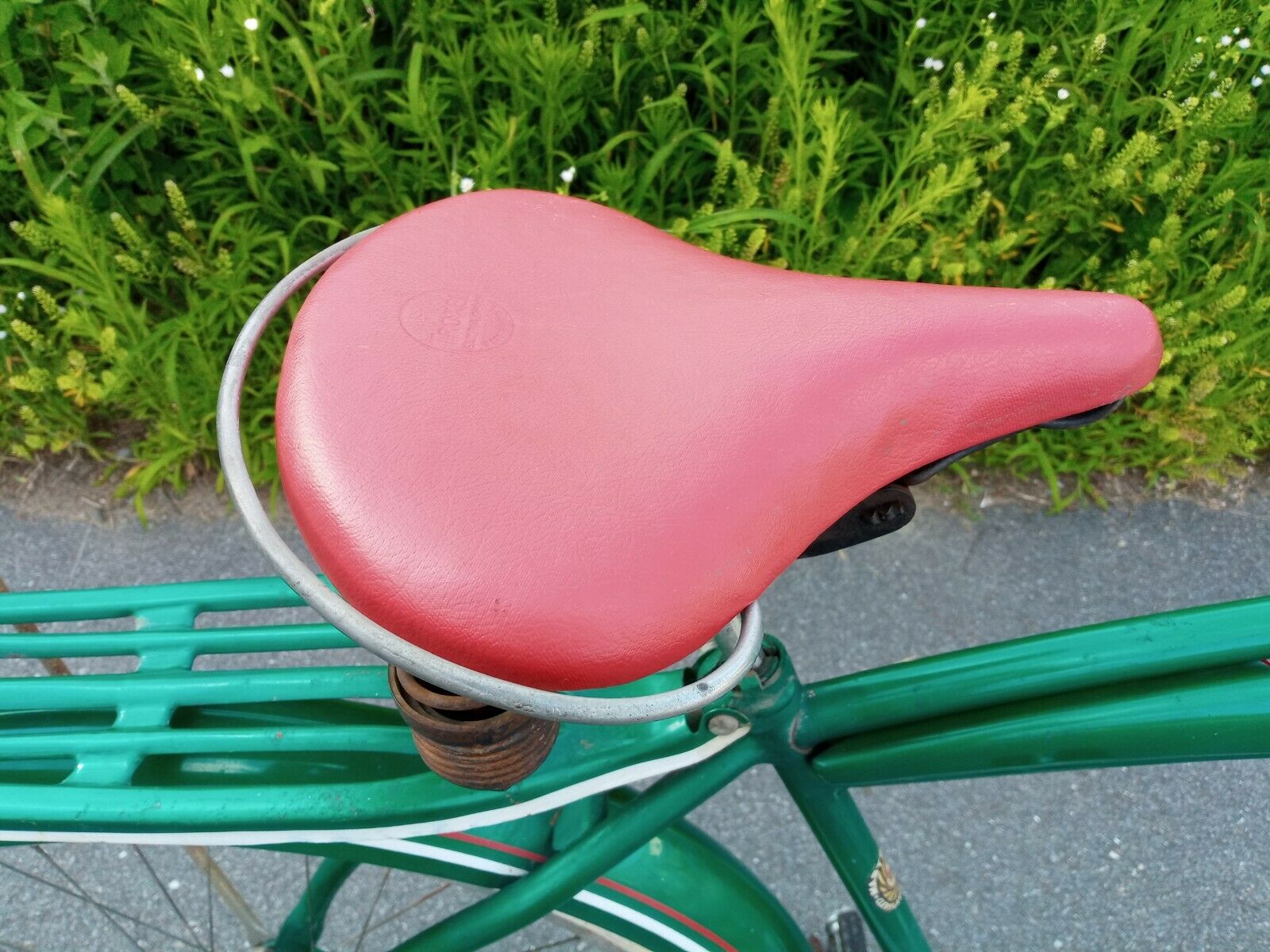 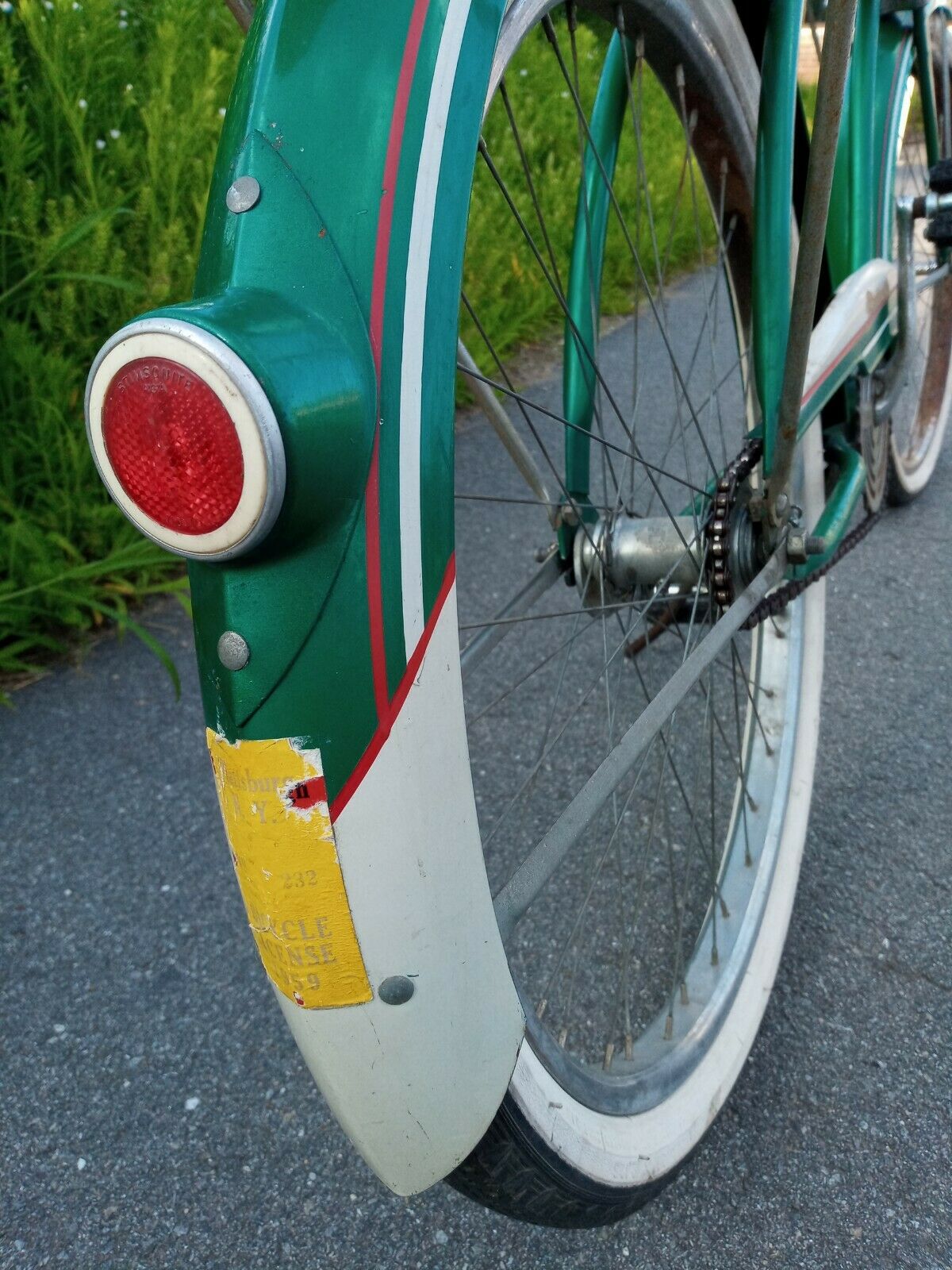 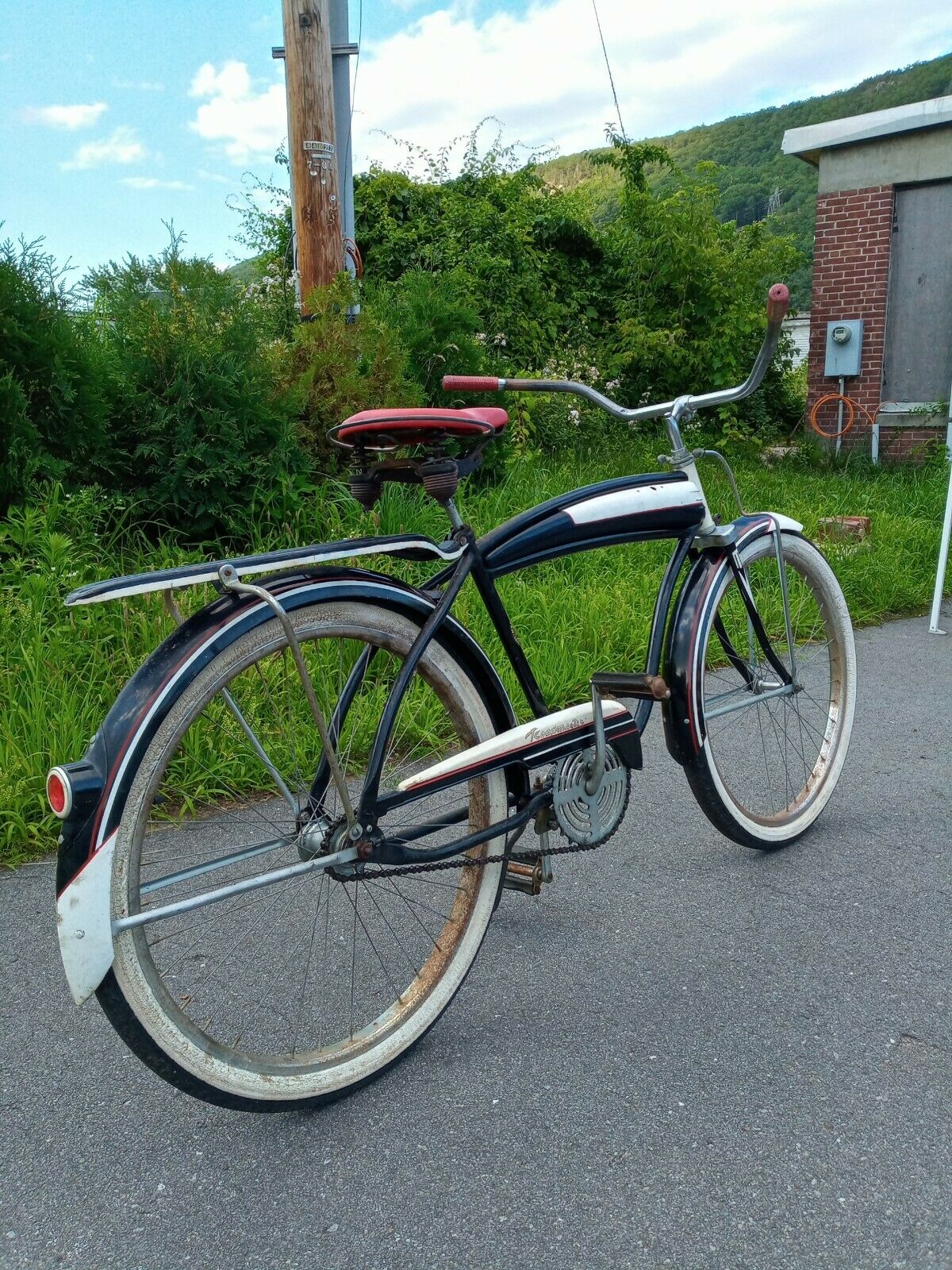 The seller arranged shipping and pulled the bike down and cleaned everything so it would clear Aussie quarantine without having to go for a high pressure steam clean. He packed it incredibly well and it arrived in perfect nick. 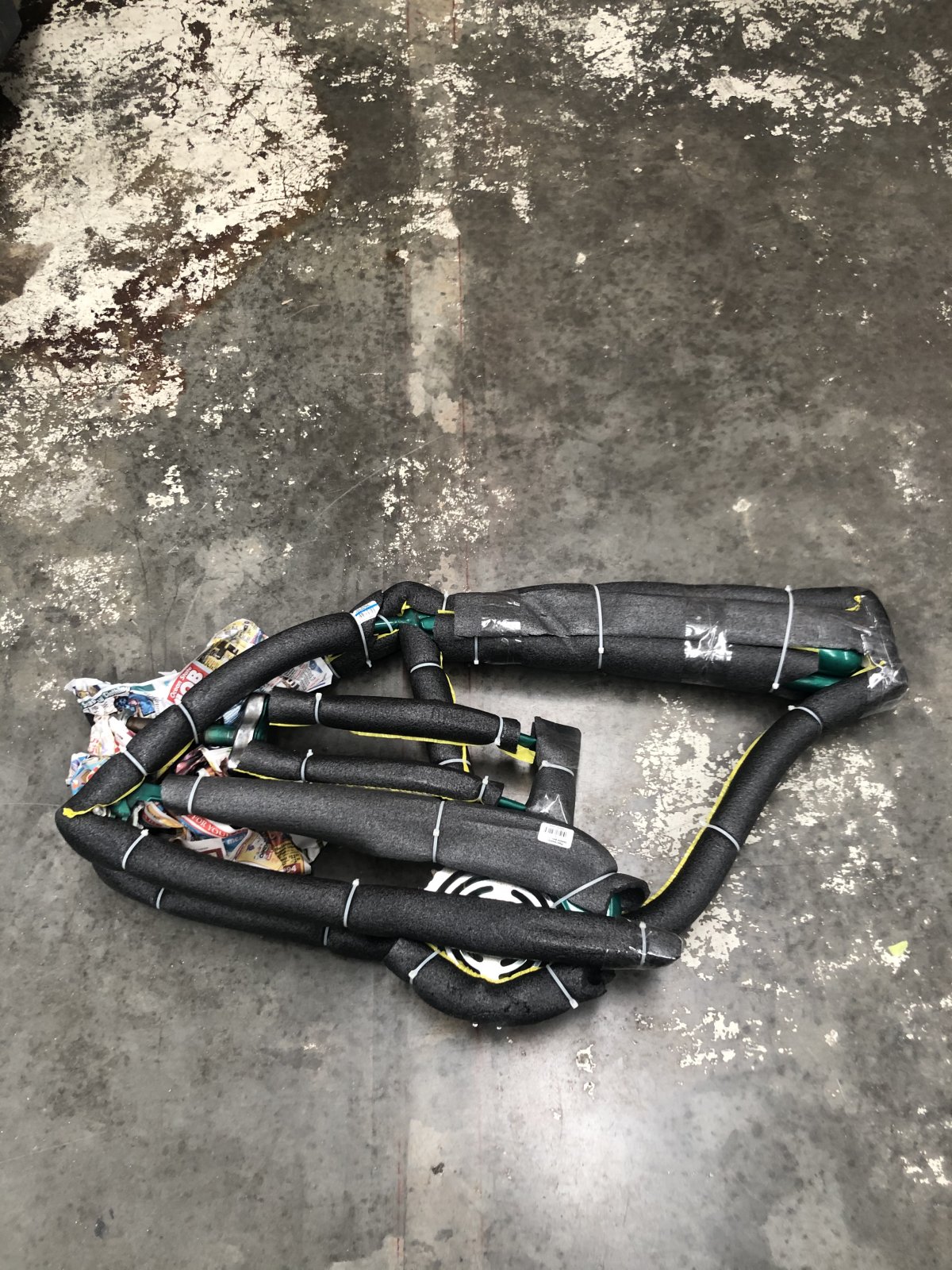 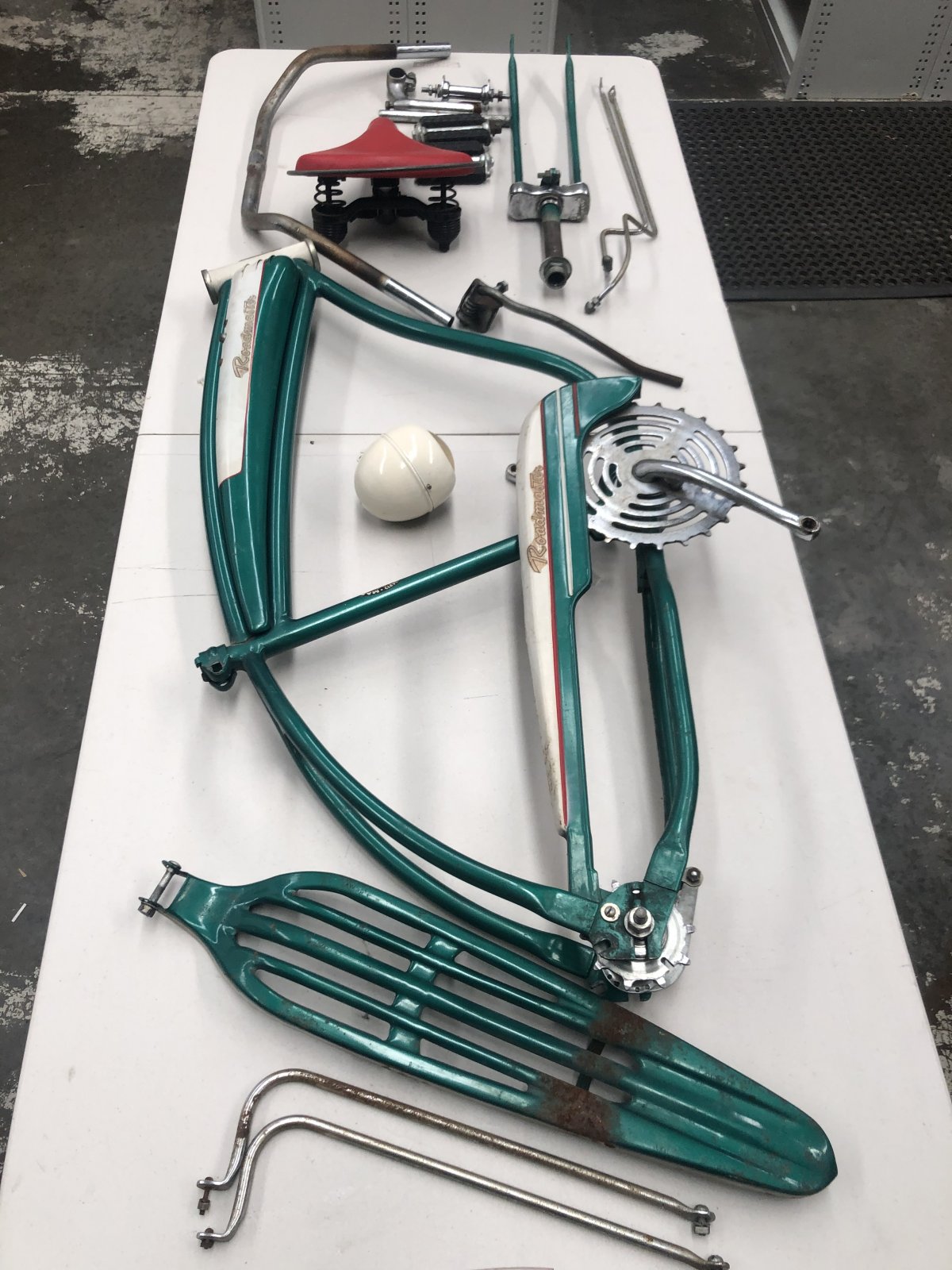 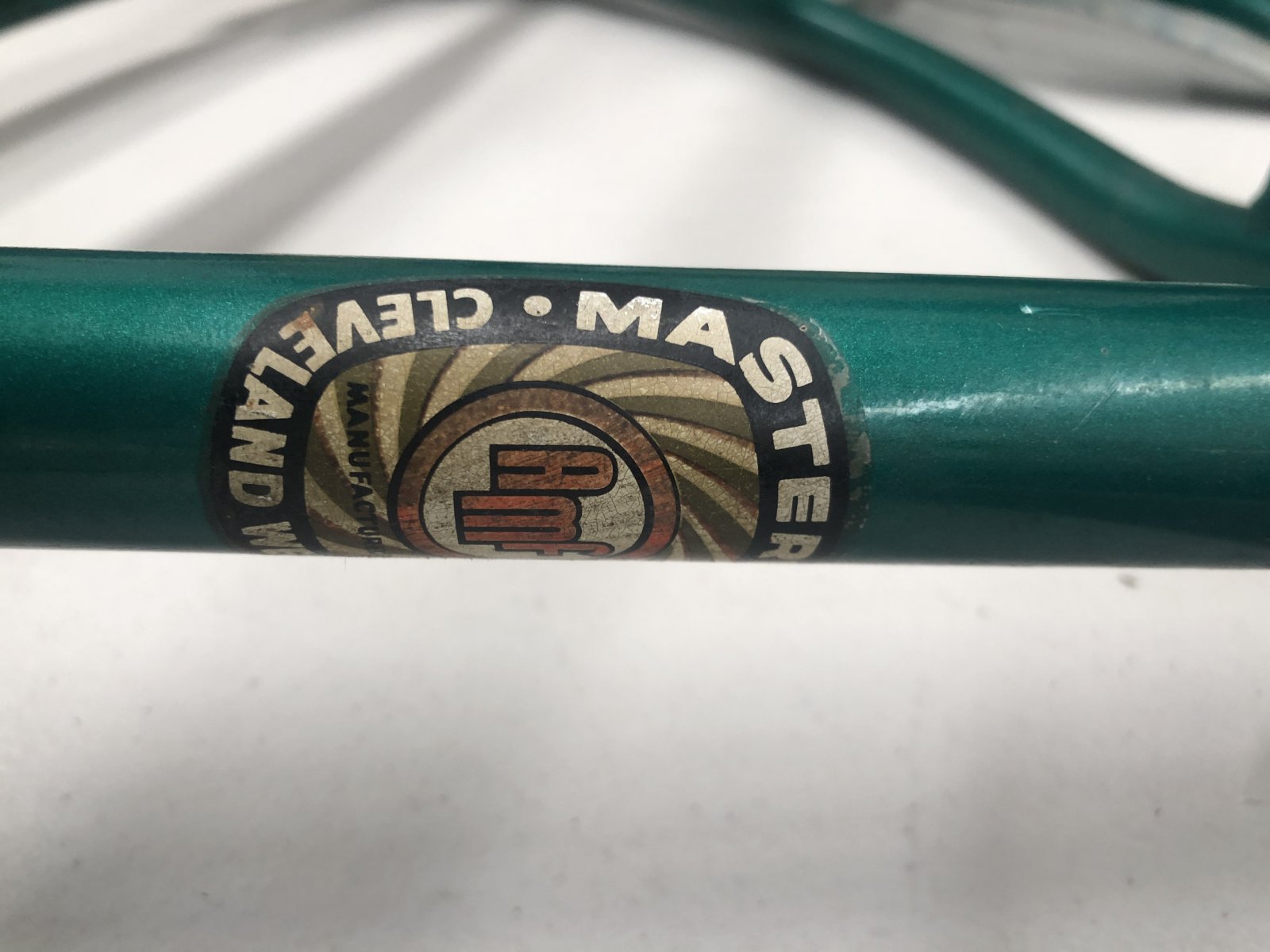 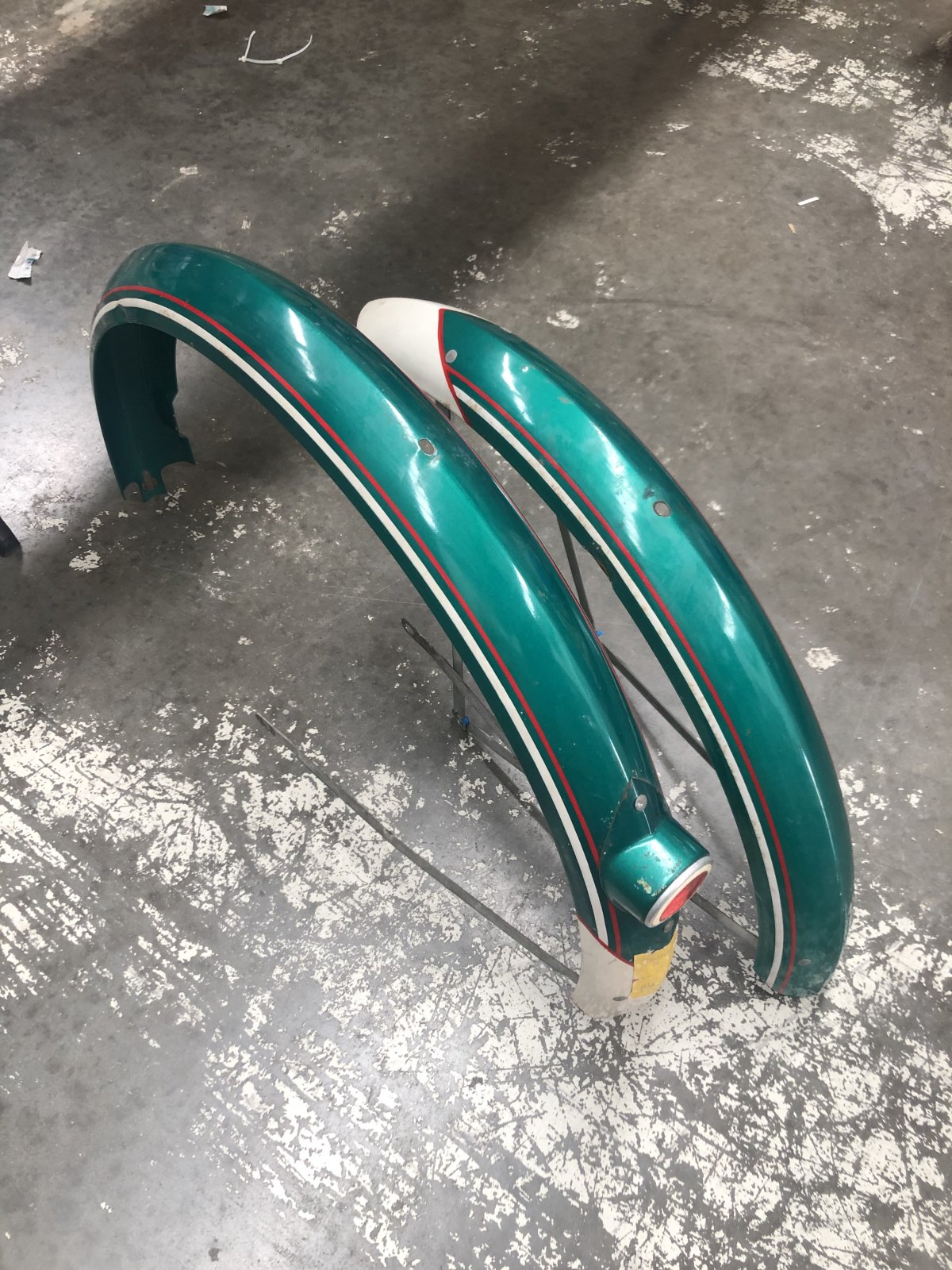 Looking at the undersides of the fenders, back of the chainguard and inside of the tank I could only assume the bike had very little use. As i started putting it together i discovered why....... 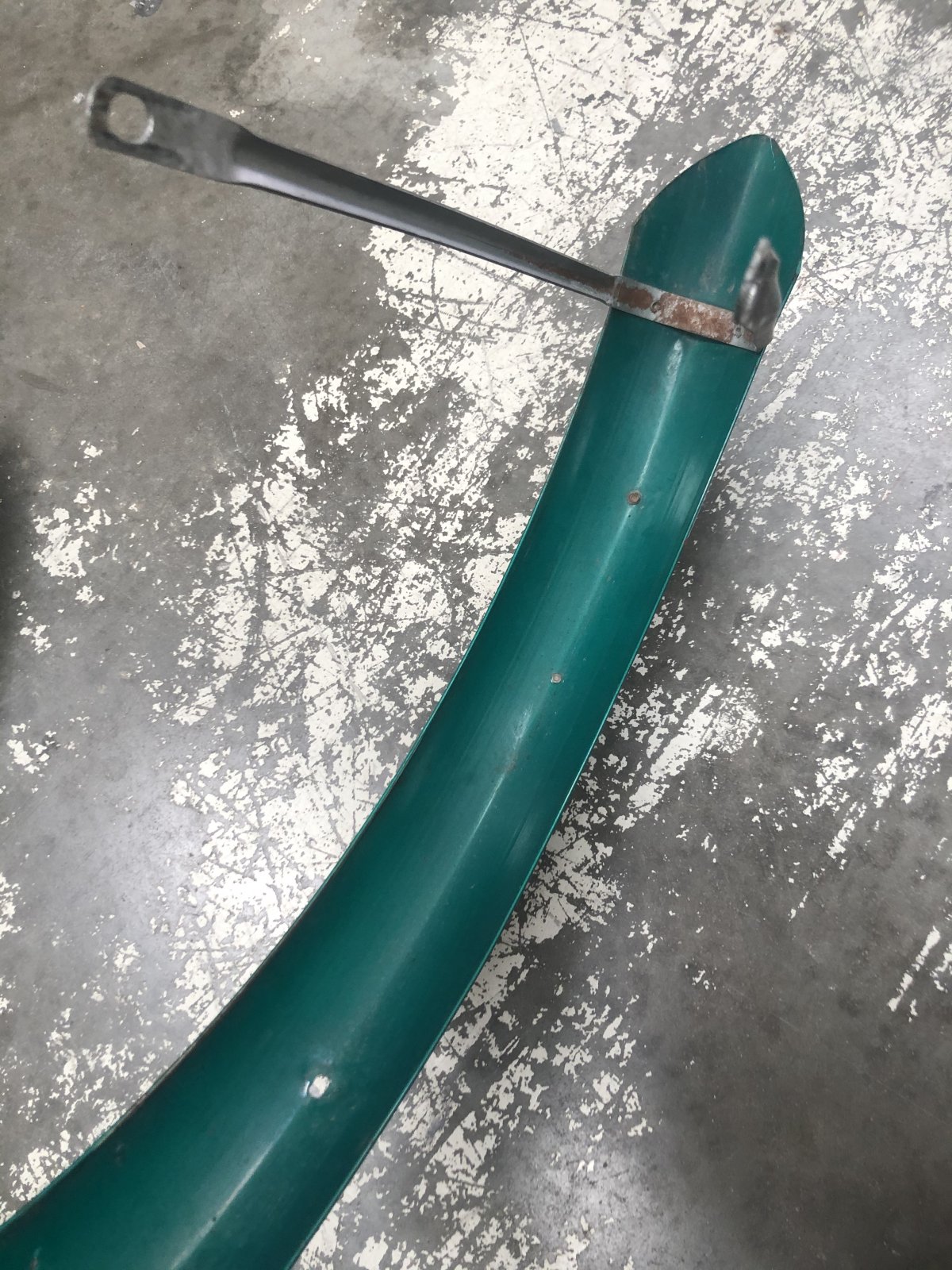 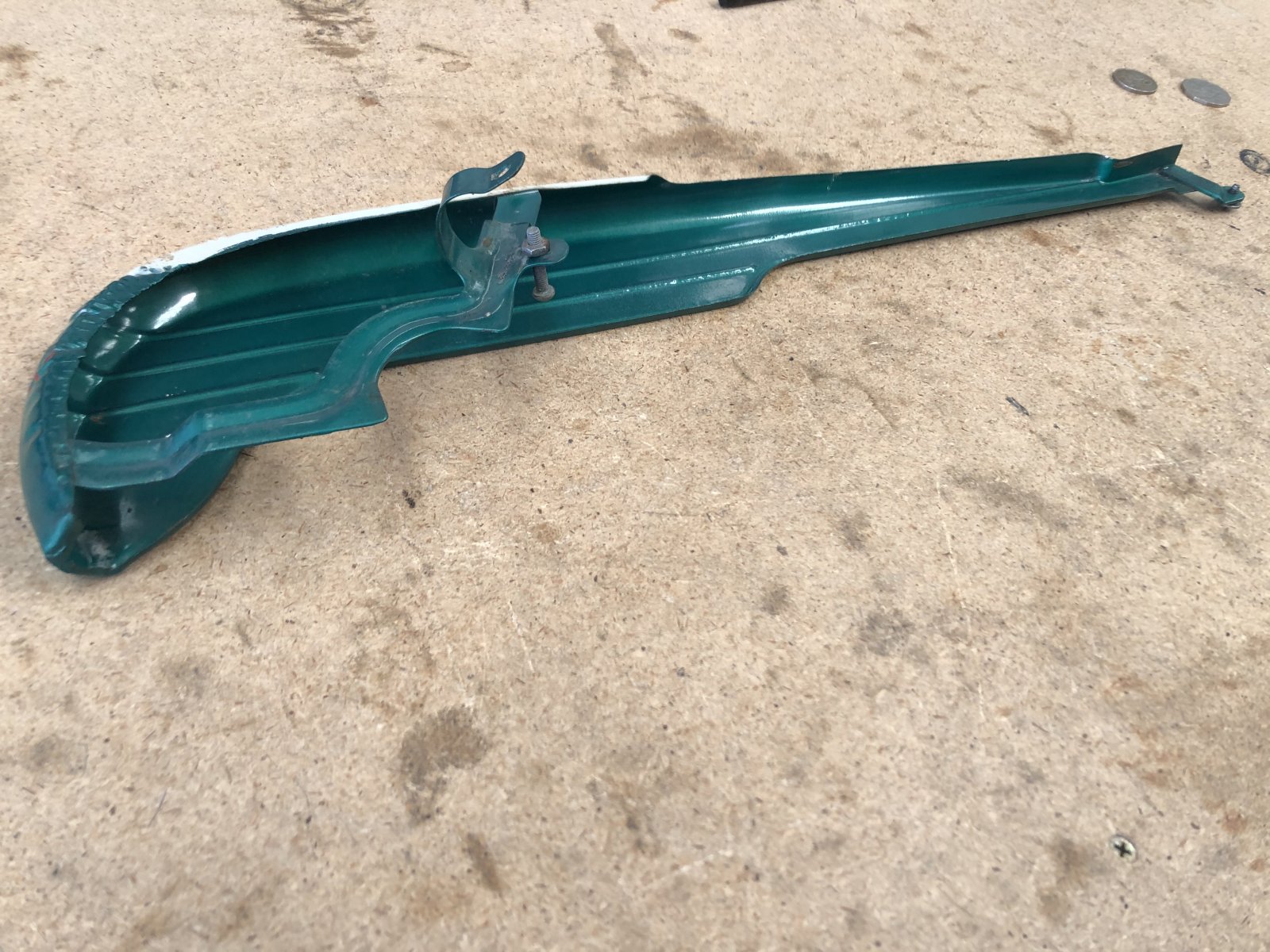 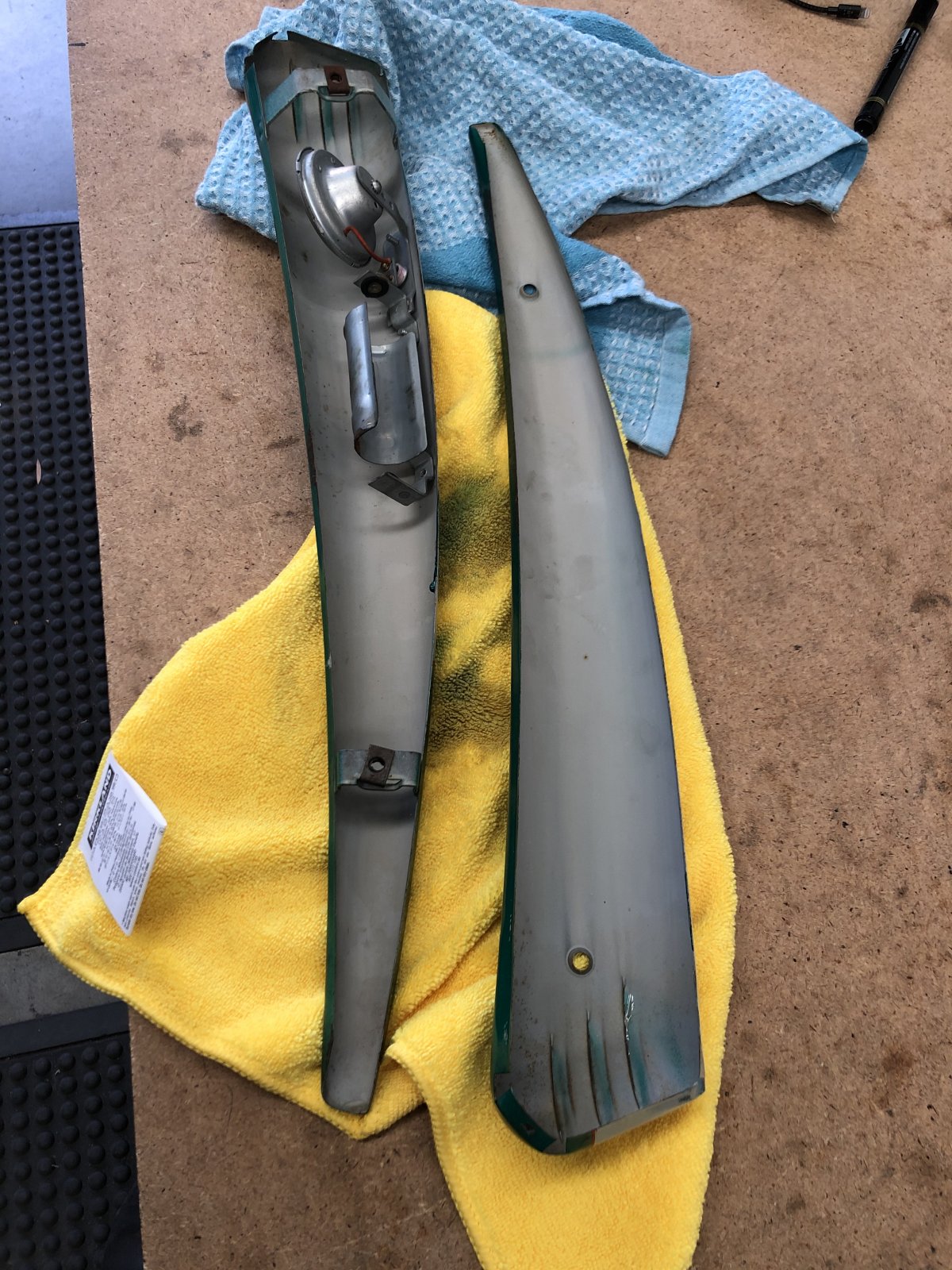 I cleaned the headset and started assembling the fork. I slid the lower bearing race on the steerer tube but couldn’t find the machined bit where it is supposed to fit. I removed the chrome fork cover and there it was. To keep the fork cover i would have had to enlarge the hole to allow for the bearing race so I left it off. I think it looks better without it too. I greased and assembled the headset which looked to be in decent condition but the fork refused to turn smoothly. I checked my work and came to the conclusion the factory headset was junk. I grabbed a used Tange headset and used the factory race as it had an unusual ID of 25.3mm. problem sorted.

Next I grabbed the stem and discovered it was smaller than the ID of the fork. The stem measured 21.8mm vs the 22.2mm ID of the fork so I pulled a repop Schwinn stem from my pile. I can only imagine how badly it rode with the loose factory stem.

Next I removed the crank and the BB cups fell on the ground. I thought that was unusual for a bike in original condition. The cups had a significant amount of wear and normally i would have tossed them but I tried to appease the purist in me and decided to reuse them. I cleaned everything, shimmed the cups with strips cut from a coke can and added a bit of bearing lock. I fitted the crank and couldn’t stop it from binding. I checked my work again and didn’t have another BB with the same thread I could try. I persevered and then noticed the left bearing cone was turning off centre. I’m not sure if it was the crank or the bearing cone but I had enough and grabbed a nice used Taiwanese dog leg crank and combined it with a new Tange BB set to get the assembly to spin perfectly.

I also used a new 52t wald sprocket and had a set wheels laced by a mate with a good used Shimano 110 coaster I had and a new SA front drum hub. I couldn’t justify spending more than $300 Aussie on a new Skiptooth chain so I converted it to regular 1/2 sprockets. I have a repop luxury liner front sprocket on the way that looks exactly like the original and will change it later. It will also allow me to refit the chainguard.

The rest of the rebuild went smoothly although I couldn’t get the short seat post to stop spinning even after more shimming with remnants of the coke can i used before. I went to the local metal recycler and found a section of 5/8 solid 316 stainless bar and cut a longer post which also needed shimming but it was a massive improvement over the factory one which looked like something off a tractor.

I stored all the original parts I didn’t use for the next owner. I left the rack
off as I think it looks better without it. The bike rides really well on its S&M speedballs, solid and way smoother than I thought it would. My guess is it was so good cosmetically because the original owner, a kid got so pissed off with the way it rode and parked it.

I read on the web that after the AMF takeover of CWC in 1951, the company had union issues and the quality of the bikes dropped. The frame looks to be well made, maybe even better than my 51 Schwinn Panther so it may just be the parts used on this bike were not checked during the assembly process.

The NY licence sticker on the rear fender is dated 1959 so I’m wondering if it was stored after that. Hopefully the weather improves this weekend and I can put some miles on it again. 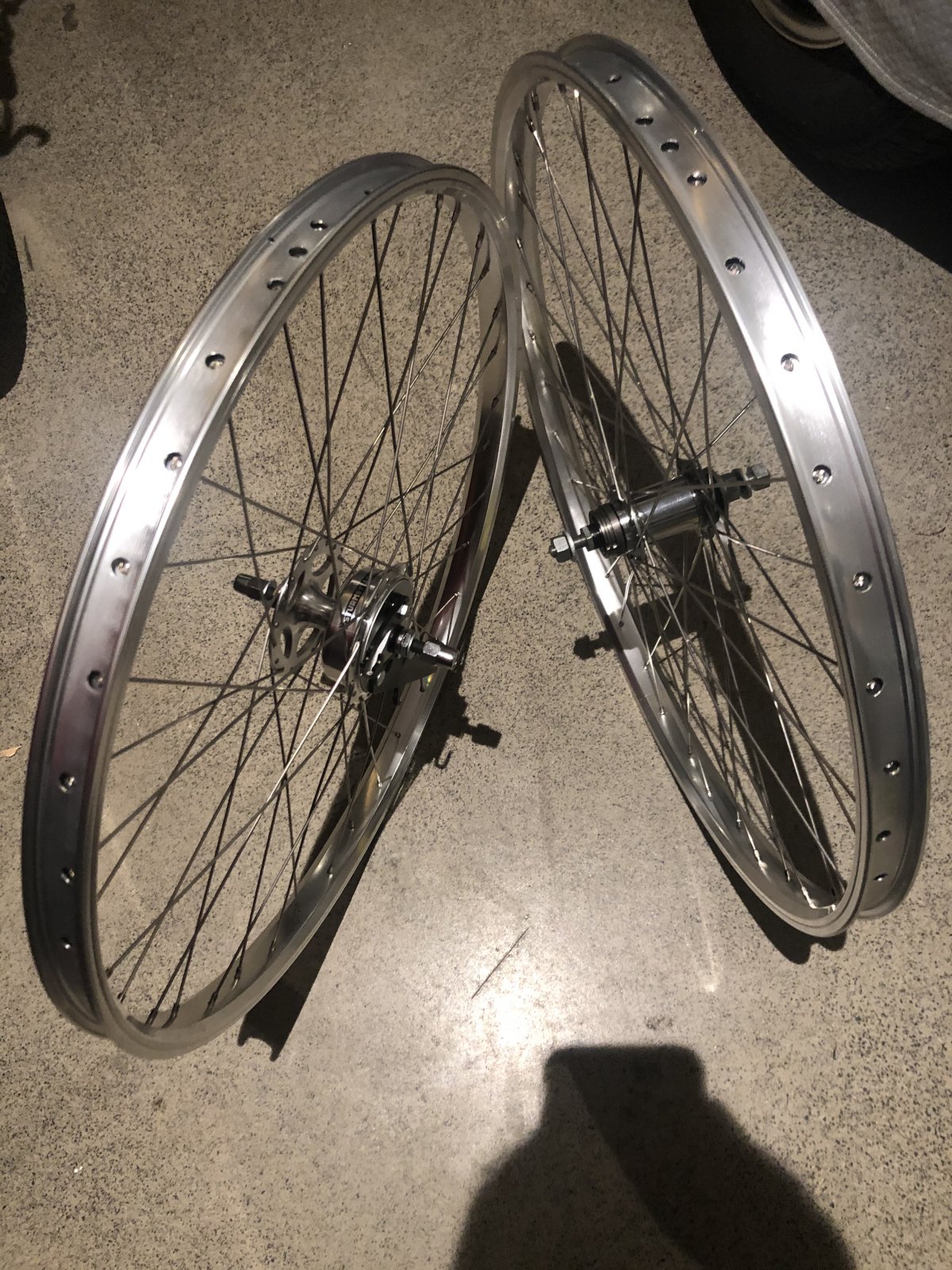 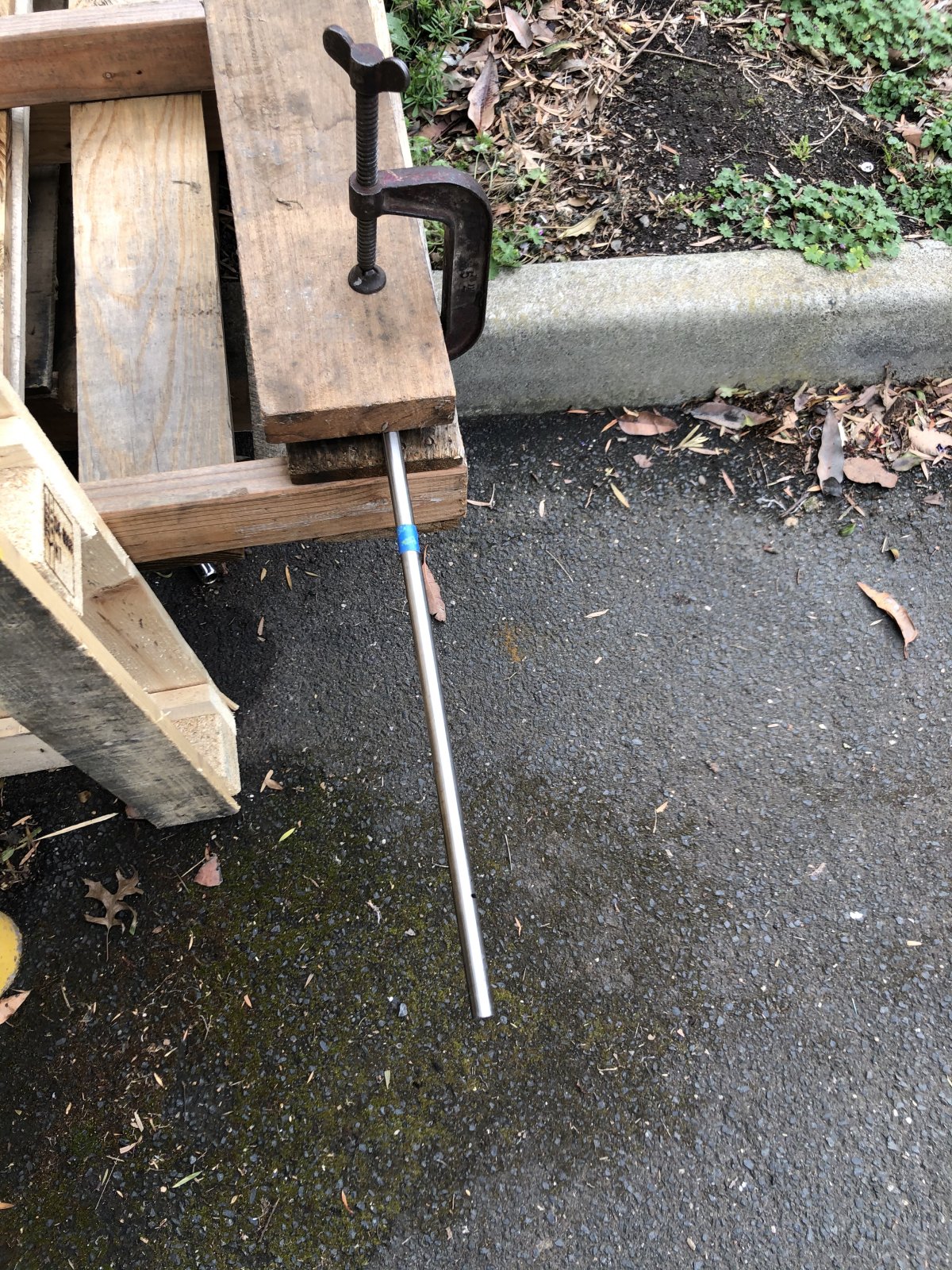 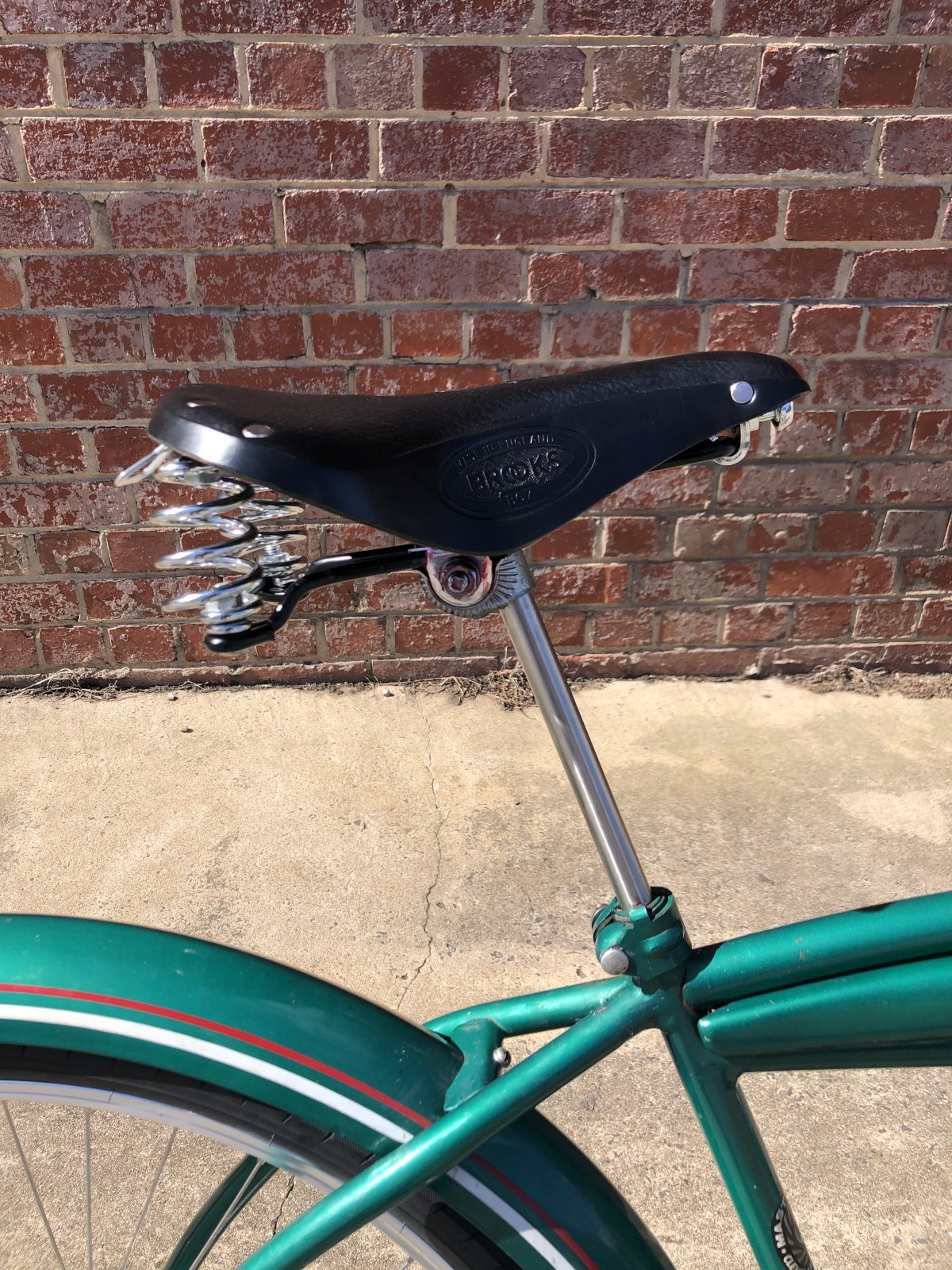 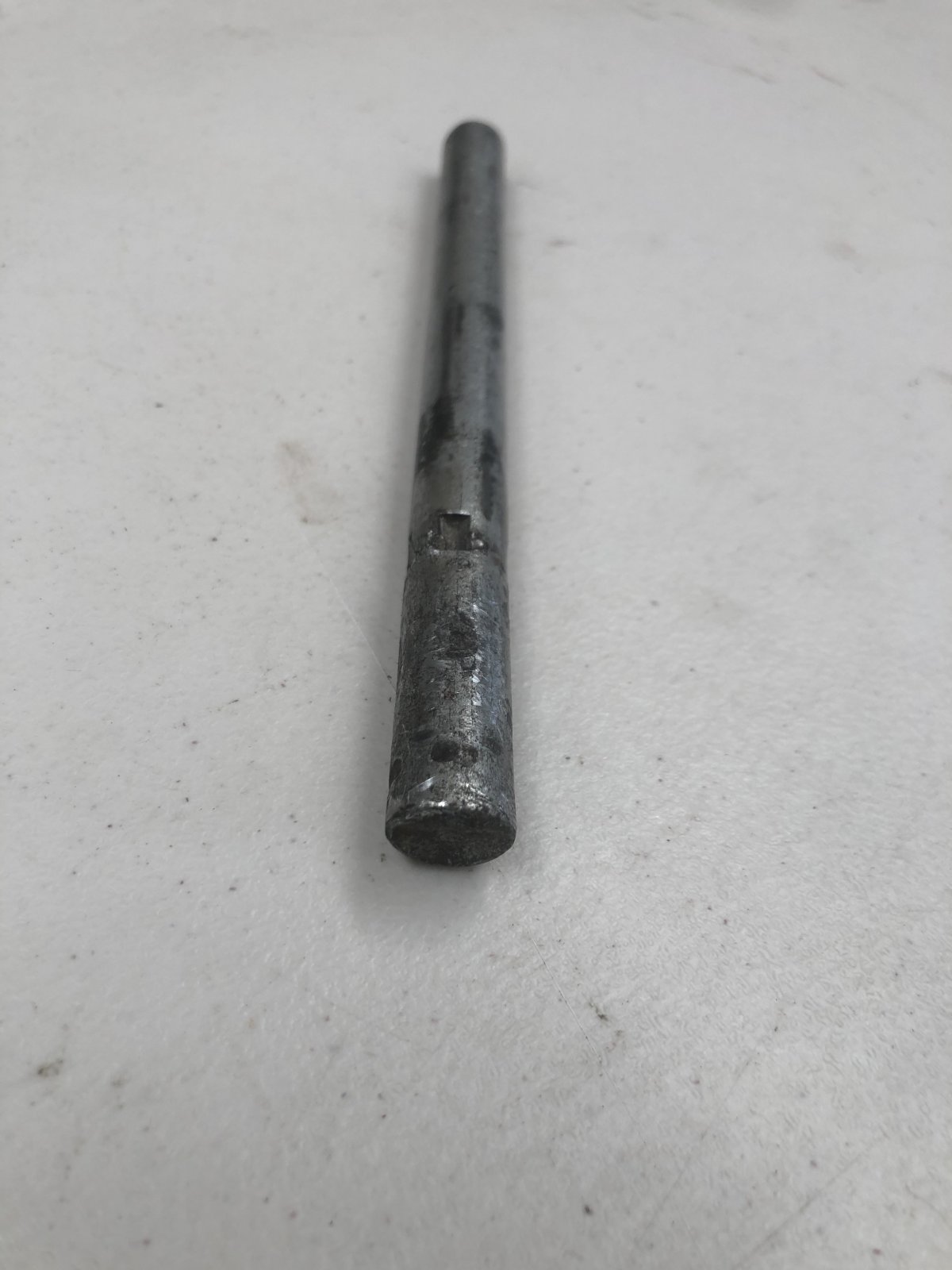 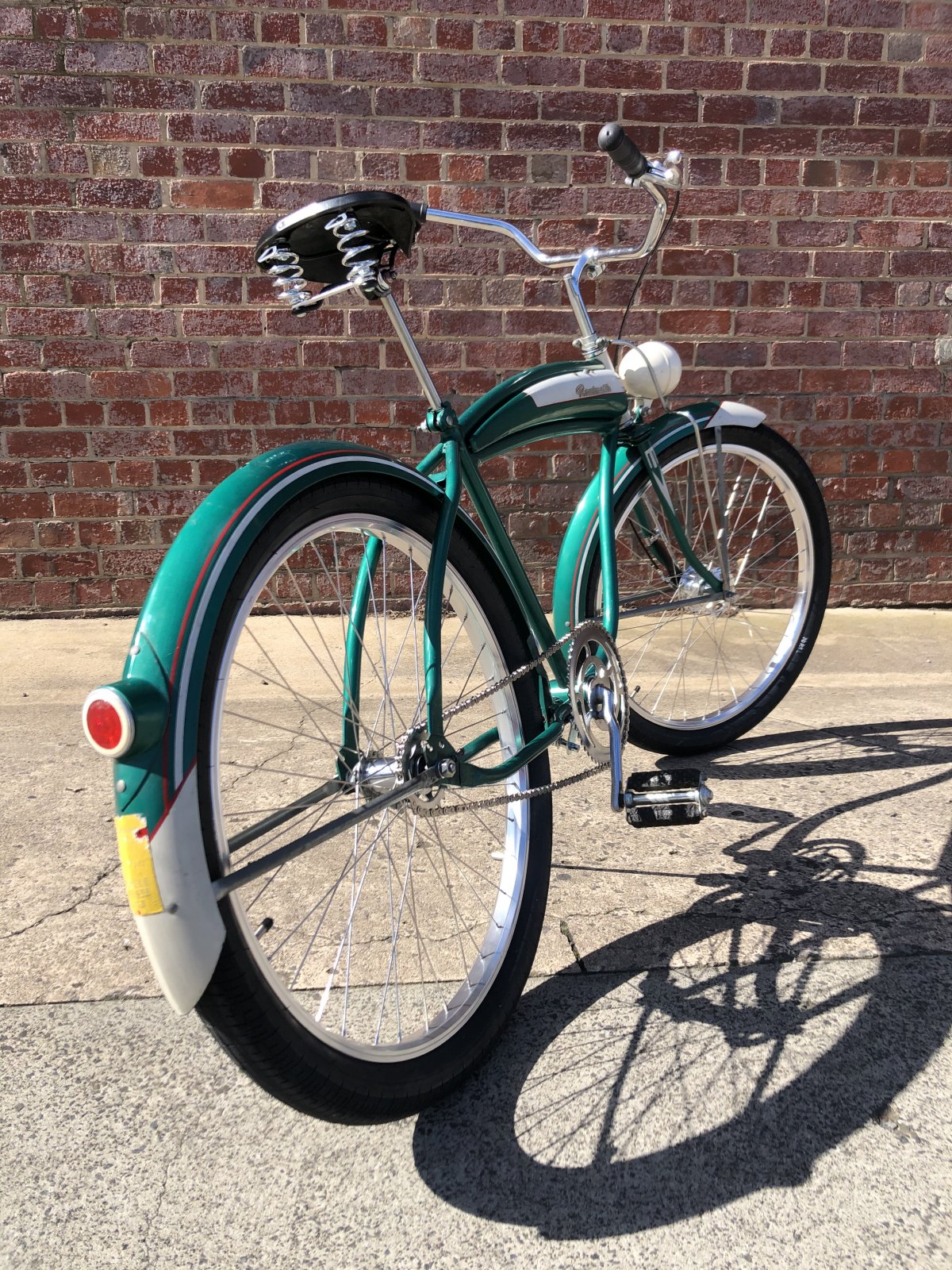 Rating - 0%
0   0   0
Thanks. The guy I bought it from picked the 2 bikes up at a bike meet in Vermont from a guy who got them from the original owners. according to the 1959 license sticker on the rear fender the bikes came from Plattsburg NY.

I have to say most of the chinese bikes i have bought for parts were assembled better, but this thing looks way cool and with the care I took to put it back together, it rides so well now and comfortable for my 6’2 build.
Last edited: Aug 27, 2021 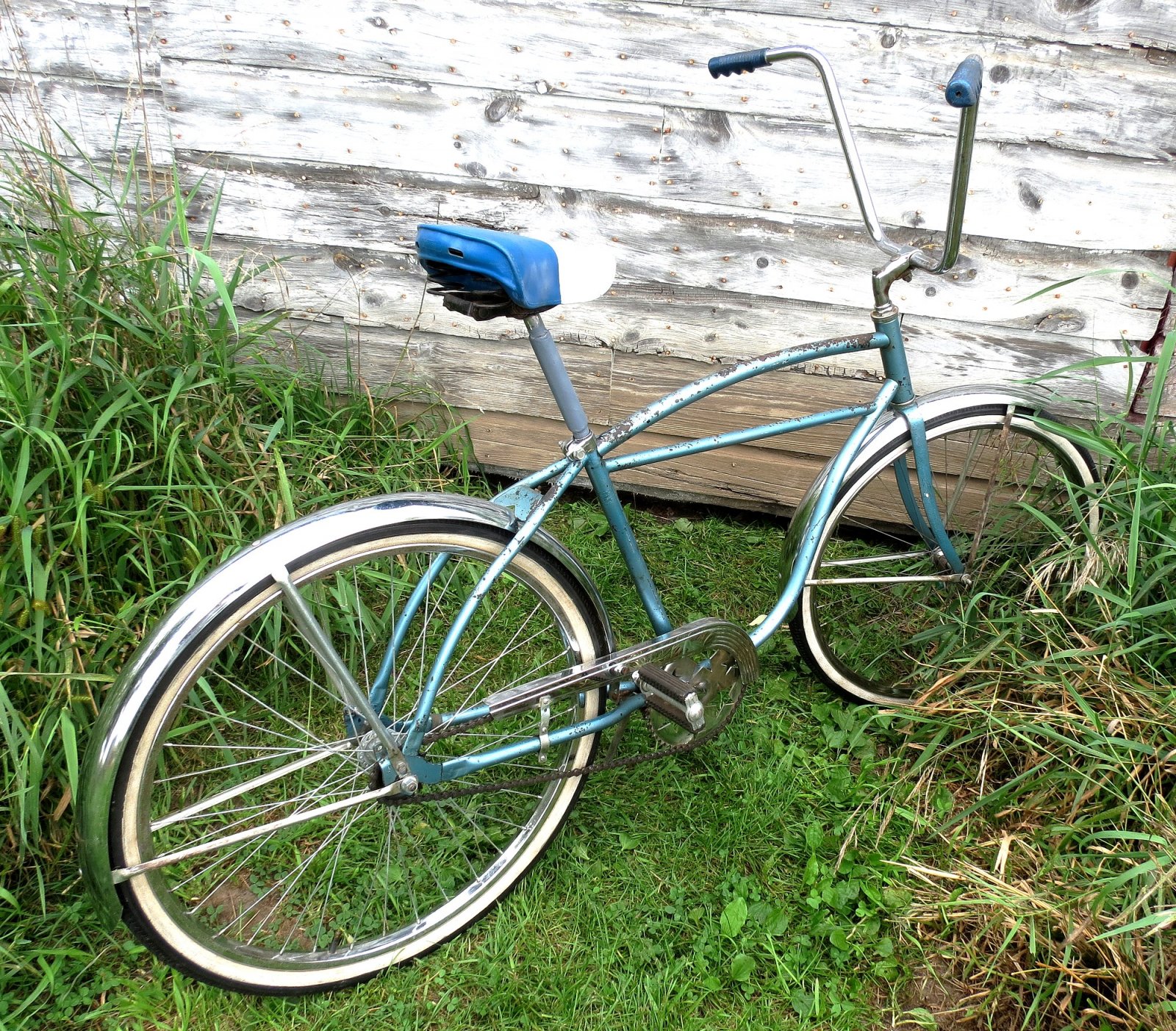 Rating - 0%
0   0   0
Thanks Matti. I rode over 10 miles on it today. I struggled a bit up a couple of steep hills with the weight of the beast and the tall gearing but it rode solid and rolls fast on the speedball tires. 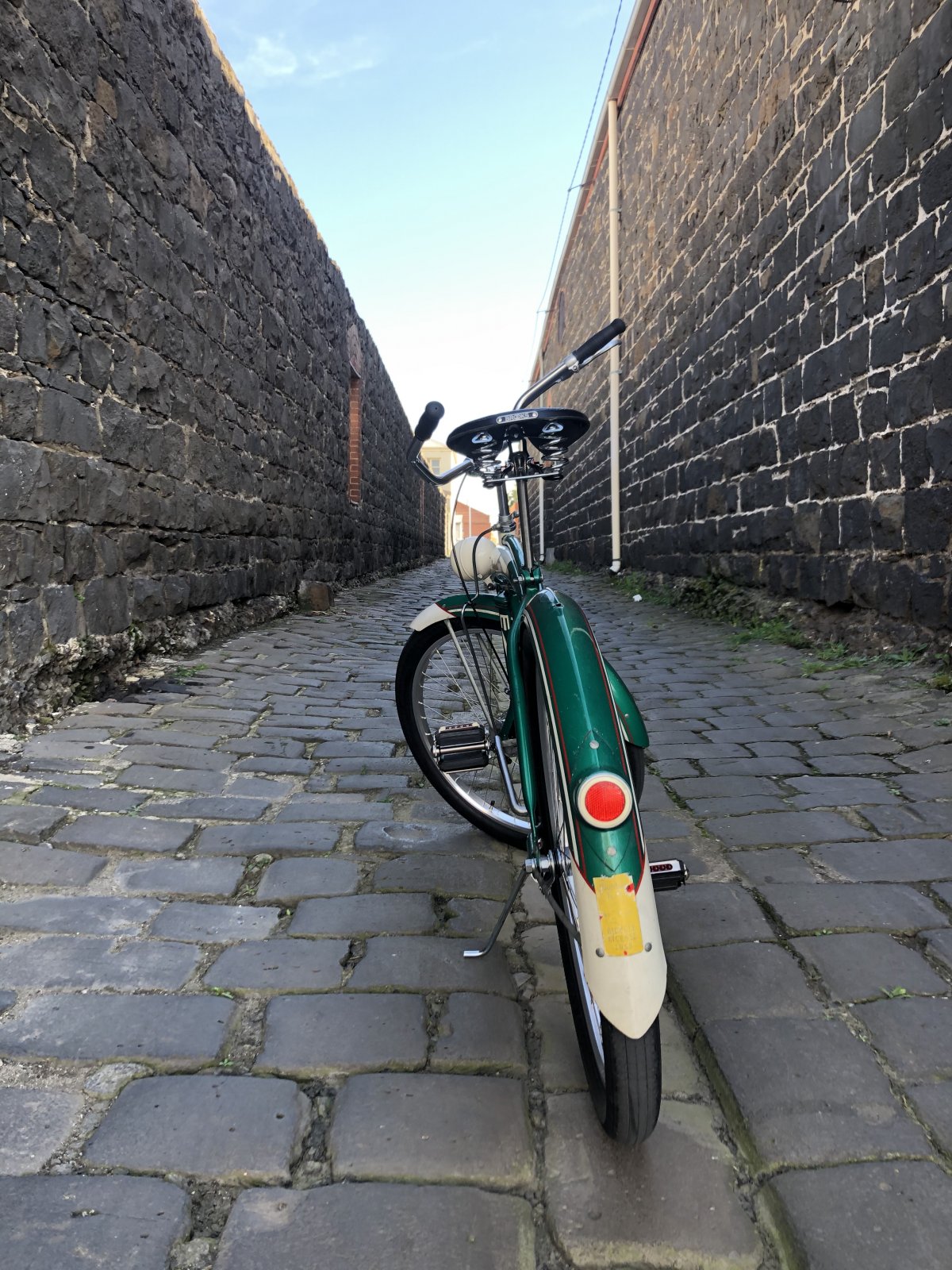 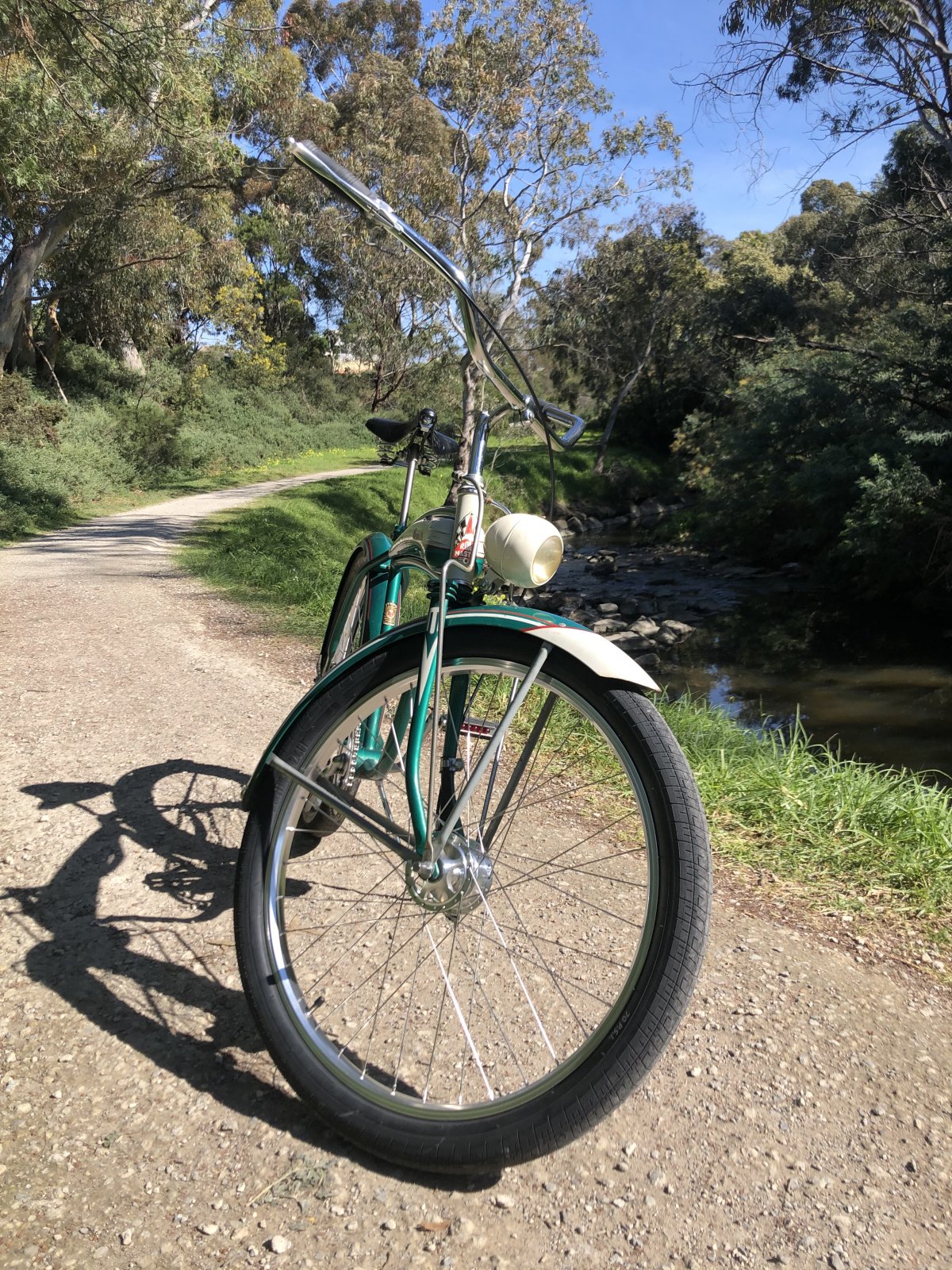 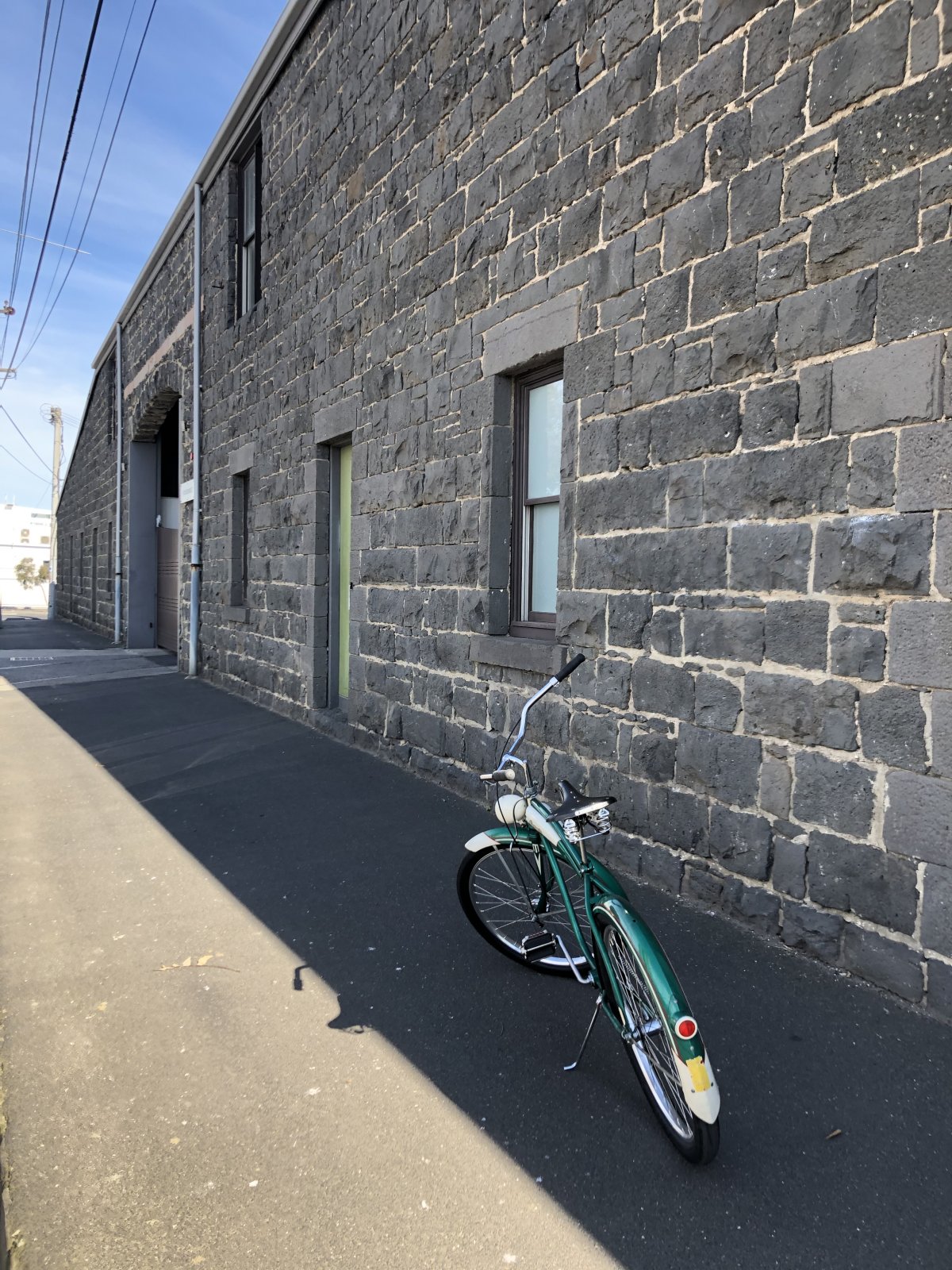 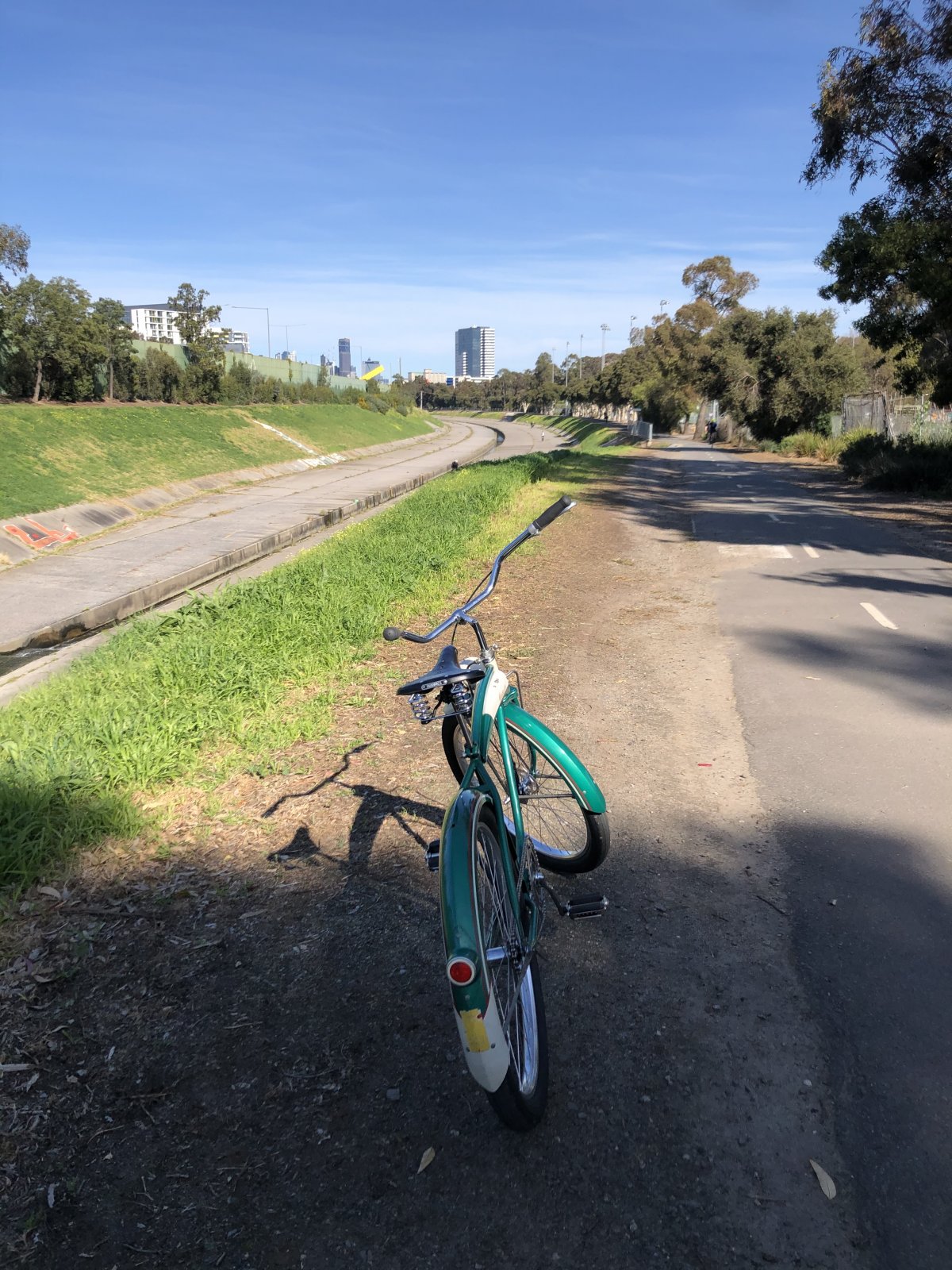 Rating - 0%
0   0   0
A while back I replaced the Wald 52t chainwheel with a 48t one from a repop luxury liner. It has the same design as the original skiptooth CW but runs a regular chain. I also pulled and fitted the crank from an Electra parts bike as it looks like the original crank. The smaller CW also allowed me to fit the chainguard.

The low bars aggravated my neck so I swapped them for these awesome nickel plated ones. The original stem went back on at the same time too. 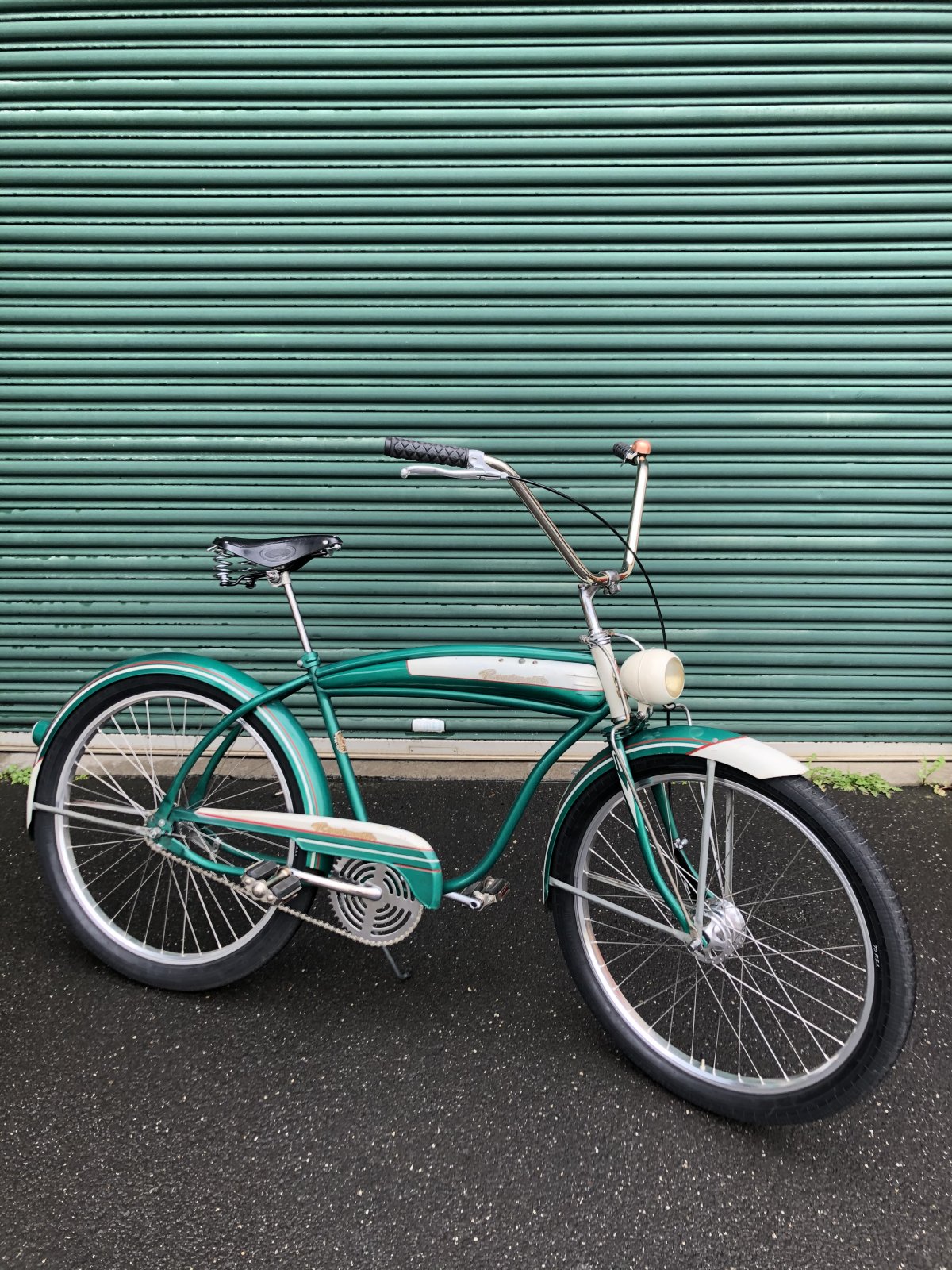 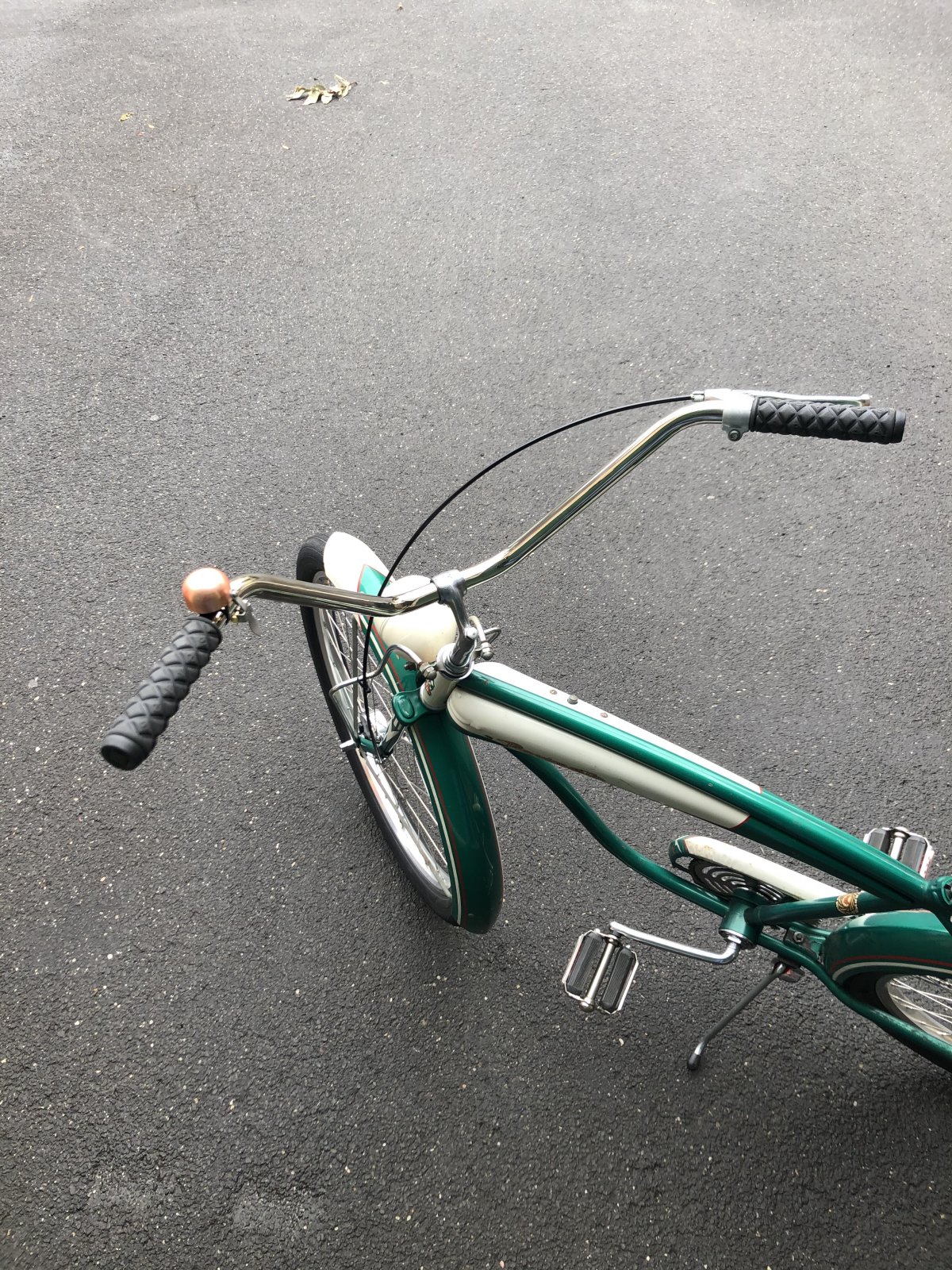 it's all about the bikes, man. http://www.ratrodbikes.com/forum/index.php?threads/deormans-gallery.104059/
I was going to update my sig line, but I'm not seein' anything worth plagiarizing right now.
J

Rating - 0%
0   0   0
Awesome job on the one. The bike looks so much better with the Chain guard and correct sprocket on it. The color is so cool looking too!
"Age is a question of mind over matter. If you dont mind,it doesnt matter."
J