Rating - 0%
0   0   0
I picked this up years ago, it likely still got its original tires, (Sidewalls say Golden Boy).
Foam grips, sprung saddle, and a near 36" stand over height.
At 6ft 3in tall, with a 36" inseam, I don't dare slip off the saddle barefoot on this one.
With my boots on, all is fine.
Its a coaster brake model, (Suntour), with black chrome Araya branded steel rims.
I finally went through all the bearings on it with some fresh grease over the winter.
To fit me better it could use a taller stem and some riser bars, but its still very comfortable to ride the way it sits.
It kind of reminds me of my old Schwinn Sidewinder that I had back in then, only lighter by about 15 lbs or so.
I actually bought this as a bar hopping bike over 25 years ago, got it from an 80 year old guy where I used to live who bought it new rarely used it.
It still had the original dealer hang tag on it when I got it. A year later I moved and it got stored till last fall.
I did change the saddle years ago, the original was a Japanese knock off of a cruiser saddle. It was comfortable but the foam rotted out and the soft cover all but fell off. The bars are beach cruiser style with a SR Swan 60mm riser stem. Its proven to be a good ride for an over hill rider like myself. Rating - 100%
1   0   0
Cool little cruiser, nishiki made high quality frames, good quality steel. I'd thrash the heck outta that thing. Can we get a closer look at the stem? Interesting looking piece
Fun has no cost, only worth.
M

From what I can find online, and from what I can remember these were around from the early 80's to around 1987 or so. They were marketed as a 'beach cruiser'.
I've seen several variations, including a 5 speed with what looks like a comfort bike stem and 3" riser MTB bars. Later versions got curved unicrown forks.
I've seen a few early models too that used one piece bull moose bars and a few with clam shell style BMX stems. The saddles are usually always either Mesinger Diamond saddles or later models with some version of the Avenir or Cycle Pro gell cruiser saddle, sort of an early version of what is now sold as the Cloud 9 or C9 by Pyramid.
I'm a big guy so I'll stick to the metal pan saddles for my bikes.
The 1986 catalog shows this bike with full length foam grips on cruiser bars, the stem is hard to tell what it is, and they don't say in the spec sheet what it was supposed to be.
I do remember they were more money than a lot of other similar bikes, enough that it kept the older buyers away who normally bought beach cruisers for the boardwalk. A buddy had a bike shop around that time and sold Nishiki, Ross, Peugeot, and Columbia. He also kept a few distributor brands in stock for the old folks, later that brand was Sun, but there was always a cheap, off brand cruiser on the floor for sale. The Peugeot was the cheapest name brand cruiser, and was very similar to the Nishiki, as was the Ross Dune Rider.

The stem is a SR Swan 60mm, they were common on BMX bikes and cruisers in the mid to late 70's.
I've seen them as late as the mid 80's on some beach cruisers too.
They were sort of a variation of the 'Girder" road bike stem. 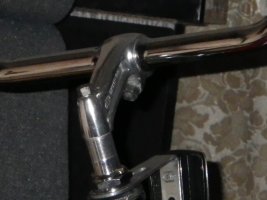 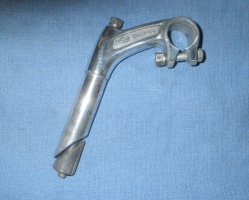 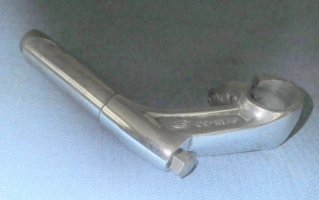 Rating - 0%
0   0   0
Nishiki was popular here, but there were a few really good dealers who pushed them as their main brand. One dealer I worked at in the 70's sold thousands of them. Mostly because they were affordable but they had a great reputation. I don't think the brand was ever spoiled by any issues or recalls like so many others then.
This one though came from out of the area, the guy that I got it from had moved here with it from the west coast, but there's no dealer sticker to point me to where it was bought. Early Nishiki was made in Japan, they went to Giant as a primary builder in the very late 70's. In many ways it was an improvement since Giant was already building a very good line of bikes, the earlier models were made by Kawamura.
The brand got bought out by Derby around 1989, the owner of Raleigh USA. Univega, and later Diamonback.
I've had a handful of them myself over the years and had no complaints but like Schwinn of that era, they were built by Giant.
I still own a 1977 Nishiki International and a 1980 Custom Sport, both road bikes, and had several others over the years.

Rating - 100%
2   0   0
Love to see old Nishiki bikes. I currently work one or two nights a week putting together bikes for a big box sporting goods store; Nishiki has been their house brand since 2010. I put together a LOT of Nishiki Pueblo mountain bikes. They're not terrible, but they are definitely NOT on par with the Nishikis I remember from the '70s and '80s.
--rick (one of the usual suspects at Retro-Ride Hagerstown)
O

Rating - 0%
0   0   0
Nishiki was a good brand back in the day, but Derby dropped the brand in the USA after 2001, then I suppose they sold the rights to it and now we have department store Nishikis. In a way its the same as what happened to Schwinn.
After 1989, Nishiki became a sister brand to Raleigh and Univega, and later Diamonback in the late 90's.
Derby went through a bankruptcy in or around 2001, they dumped Diamondback and Nishiki, and eventually sold off the Raleigh branding too. Today Nishiki is only a brand name owned by the Accell Group which owns many vintage brand names. The bikes are mid grade, made in China and really have no relationship to the original brand.
In reality, Nishiki, like many others was just a made up brand name to sell bikes under, they just happened to choose good, quality manufacturers to make their bikes.
There's a pretty good history of the company on Wikipedia right now,

Being someone who grew up around bikes and bike shops most of my life I've never been too concerned about what brand is on the bike. My Nishiki Pacific is really a Giant, which in a way is related to the later Schwinn bikes, also made by Giant. My Custom Pro road bike is also made by Giant but my 1978 International is Kawamura built. I've had various others over the years, including other International models, several Custom and Custom Pro models, and one early MTB, but those others are gone years ago.

I tend to buy or build a bike, enjoy it for a while then sell it and move on to something else.
I do really like this cruiser, but its a tad big for me. The problem is, the next size down is likely too small. I'd rather deal with a bike that's too tall than too small overall.

I would like to build it a set of extra wide wheels, some 2" wide rims and maybe a pair of 2.35 Fat Franks or similar, or wider if I I think they'll fit. I can get away with almost a full inch wider tire than the tires on it now. I was thinking I'd build up a set of heavy duty wheels, using 12ga spokes, the 2" wide rims, and a set of the Sunlite Sandy Beach 2.5" cruiser tires in black. I've been waiting to hear what they actually measure when inflated. They could be a good affordable option for a few of my prewar balloon tire bikes as well.

The bottom line is I'd have to find the tires and spokes at the right price before that would happen. I'm not paying $50 for two bike tires, especially since the tires on it still hold air.