Looks much better.
There's nothing foolproof because fools are so ingenious

Kevin B said:
Looks much better.
Click to expand...

Thank you Kevin. I am really digging the tiki avatar. Is that your own art?

Nope, a sticker I bought on Amazon for the Swamp Tiki bike.
There's nothing foolproof because fools are so ingenious

kingfish254 said:
I had a lot of catching up to do on your build. Glad you got the fat sturmey working. They are really great looking (and working) hubs. I love the tread pattern on the whitewalls. Looking good!
Click to expand...

Thank you for suggesting it Kingfish. I still need to do a little tuning on my chain tensioner and I may decide that I only want one front cog.

I’ve been trying to get a real 700 C whitewall tire for the front, but the closest I can get is a very narrow gum wall tire.

I dug through my pile of parts and I found this long-arm SIS derailleur and decided I would try to fabricate a chain tensioner from it, Rather than the Shorty. 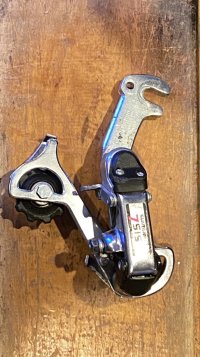 I drilled out two of the rivets so I could separate the upper and lower halves. 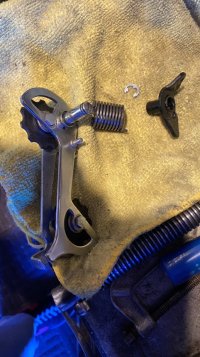 There was some difficulty accessing the circlip, and I bent the snot out of the black bracket ears. I’m going to trim that and weld it to a different piece of metal anyway. If I make a completely new bracket I have to duplicate that little tube.

But it has an ID machined to fit the pivot.

I decided that the bushing needed to be mounted in a thicker piece of steel, rather than welding something on this twisted bit.

I literally ripped it off the bushing with the vise and pliers. 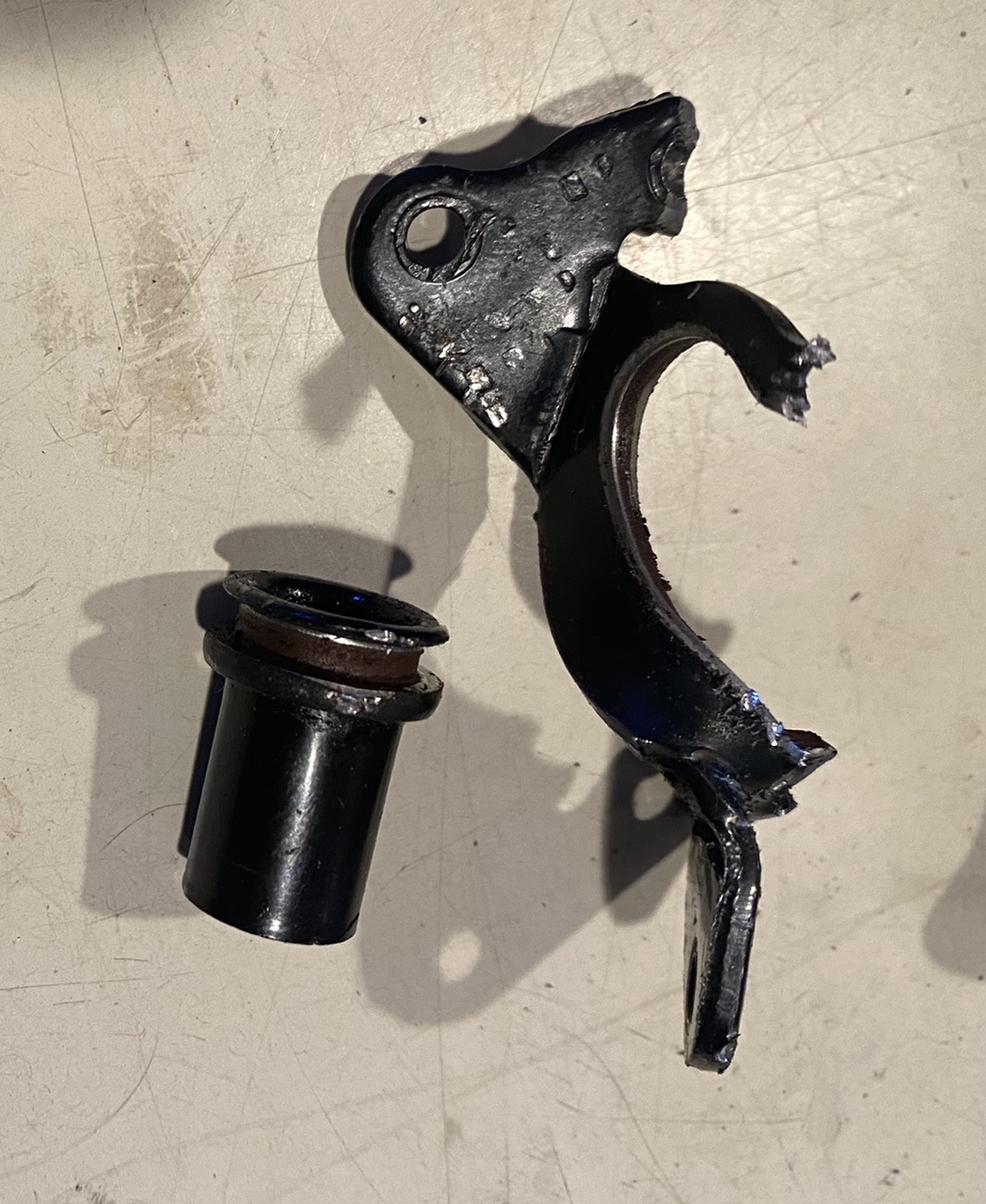 I put this in the drill press and spun it against a file to remove the outer flange. (No pix)

I reamed out the threaded hole in this little Shimano adapter bracket, and pressed the modified bushing in place. I decided not to tack weld it in, yet, because the interference fit was stupendous. This will face backwards so you don’t see the scarred up chrome. 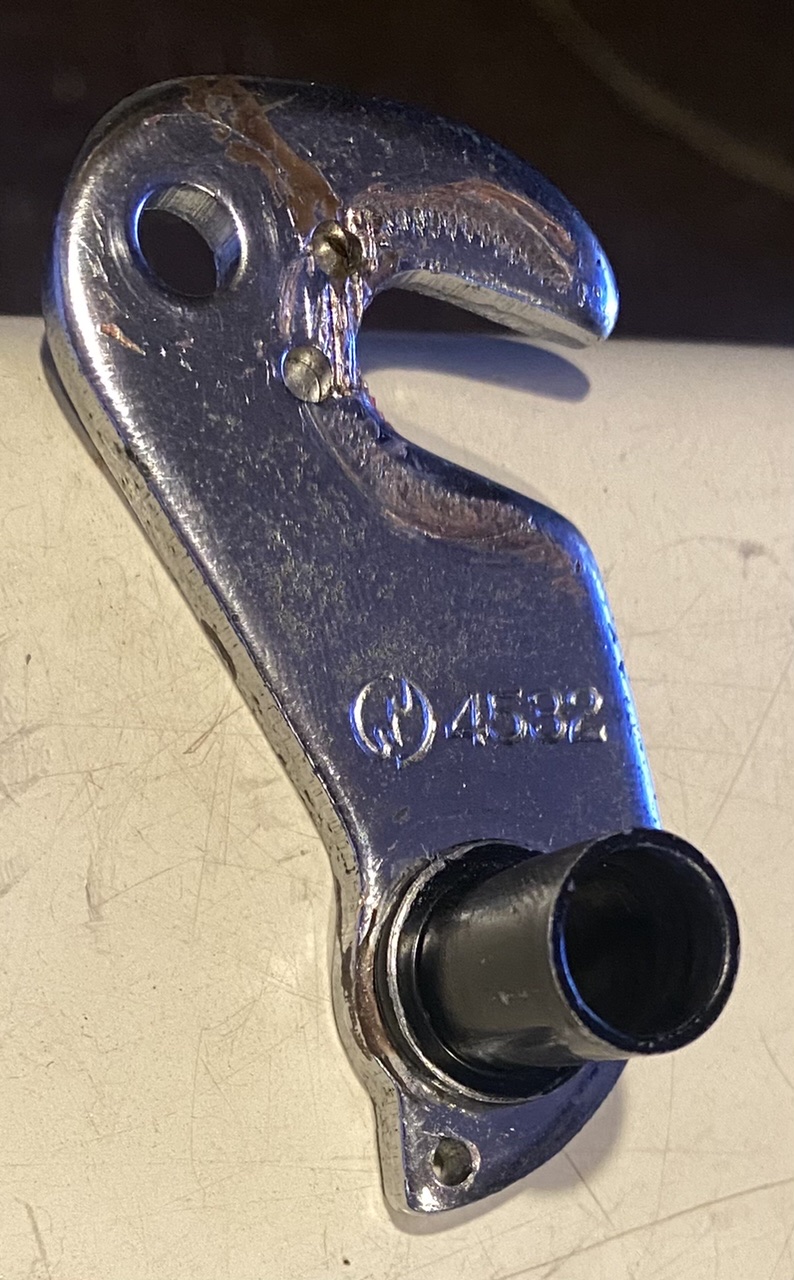 I also drilled the little hole for the end of the spring.

I had to ream the bushing a little bit afterwards. It shrunk a little as I pressed it in.

Here it is all assembled on the bench. 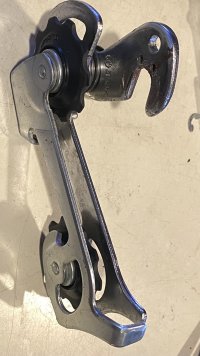 And here it is assembled on the bike. 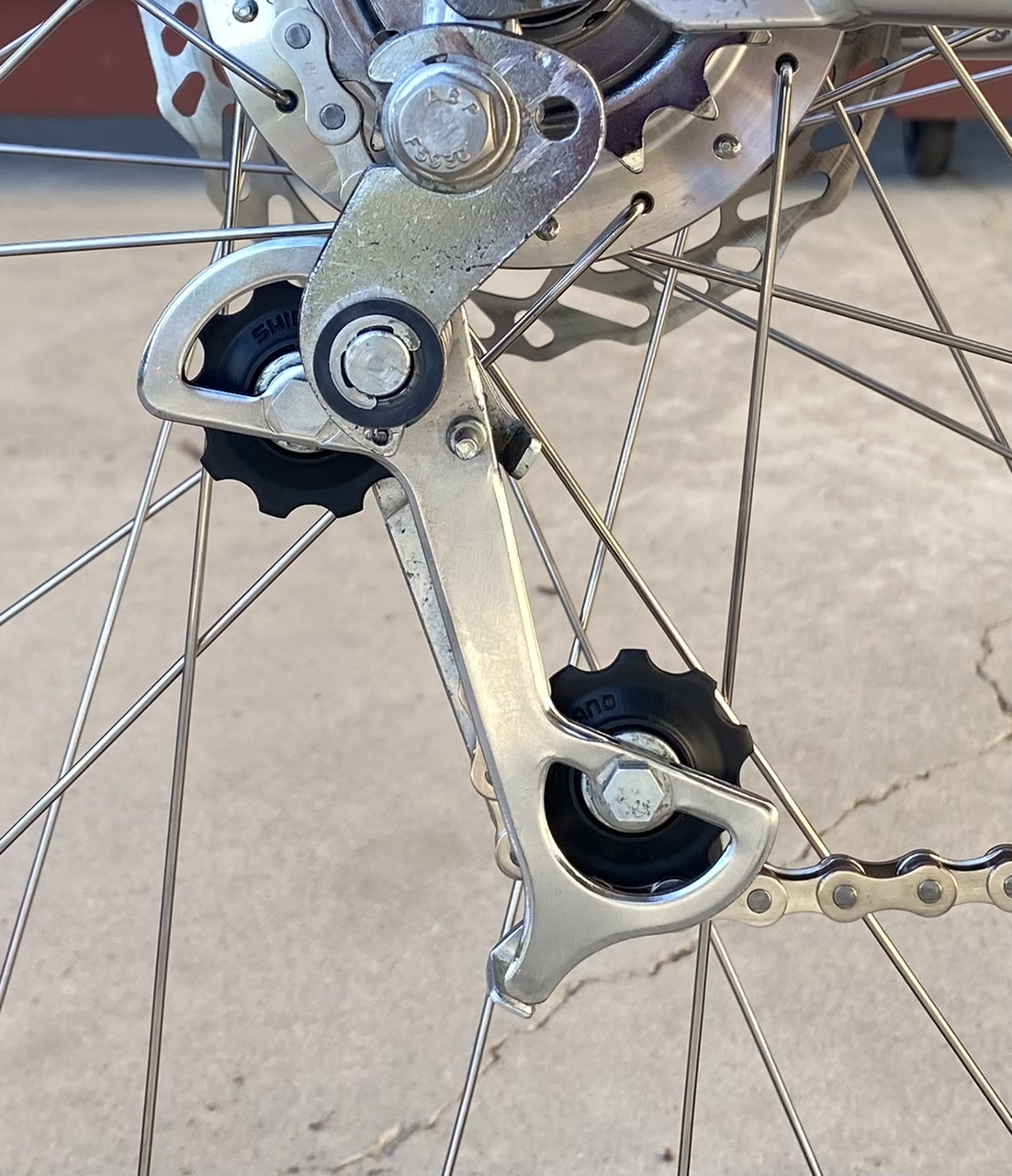 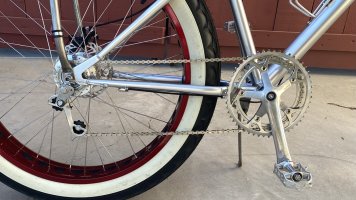 On the first ride I decided to reposition the bracket for more clearance between the sprocket & the upper idler. When I get it to tight it growls, and when I get it too loose it wants to skip teeth in low gear. 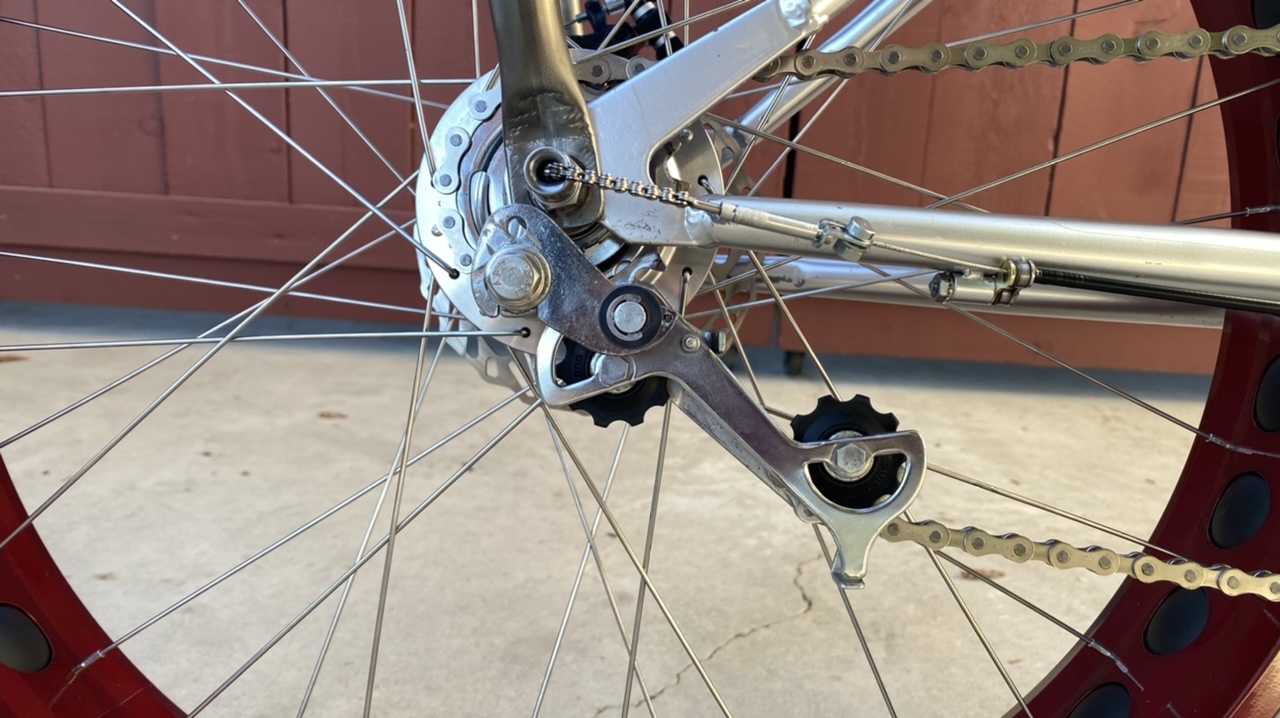 Neither way is ideal and I have decided to do a couple things here. First I think the upper idler is entirely superfluous. I’m going to take it off and probably trim the arm appropriately.

I have some newer, larger idlers, and I think I will put one on the lower position.

Anyhow if you ignore the growling the bike is completely rideable right now and it sure looks better than what was going on before. 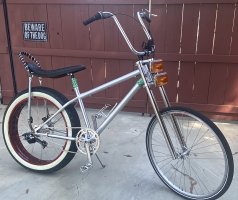 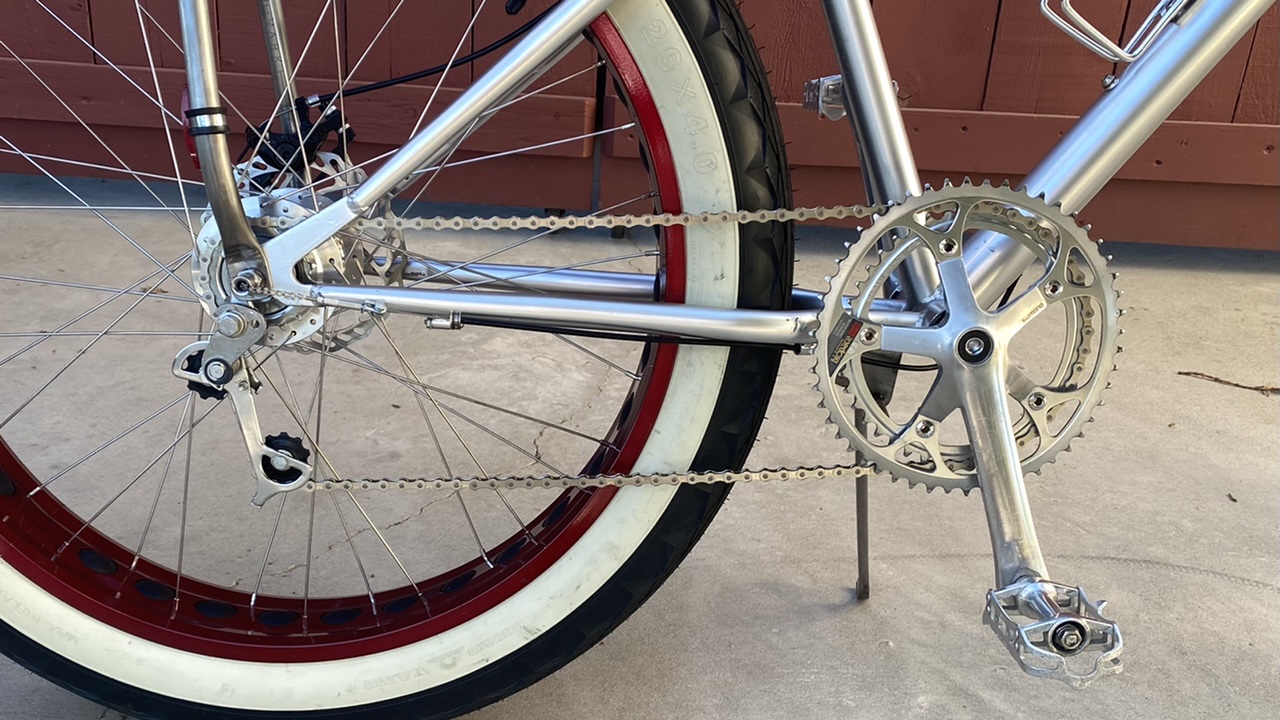 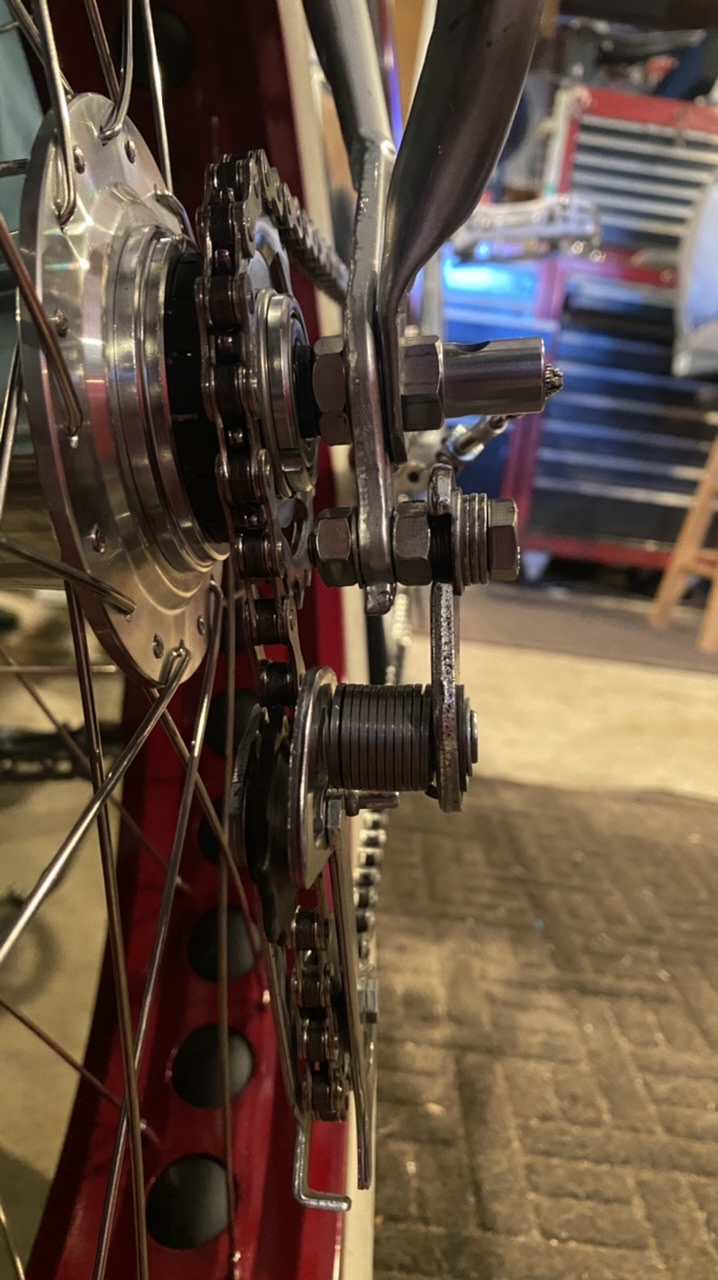 Here you see that it mounts on an ordinary cantilevered bolt. This is 5/16” stainless steel, and I just threw a bunch of washers on because I didn’t want to trim it off yet.

I put a Starwasher into the back nut so it wouldn’t turn, but this thing is plenty tight.
Last edited: Aug 7, 2022

It’s going to get some more modification, and more than what I’ve already explained, because it is still my intention to cut this frame, drop it, and build a better sissy bar.

I don’t have a design yet.

The larger plastic idlers did not fit on this.

I trimmed off my hanger bolt today so I wouldn’t need all those flat washers. 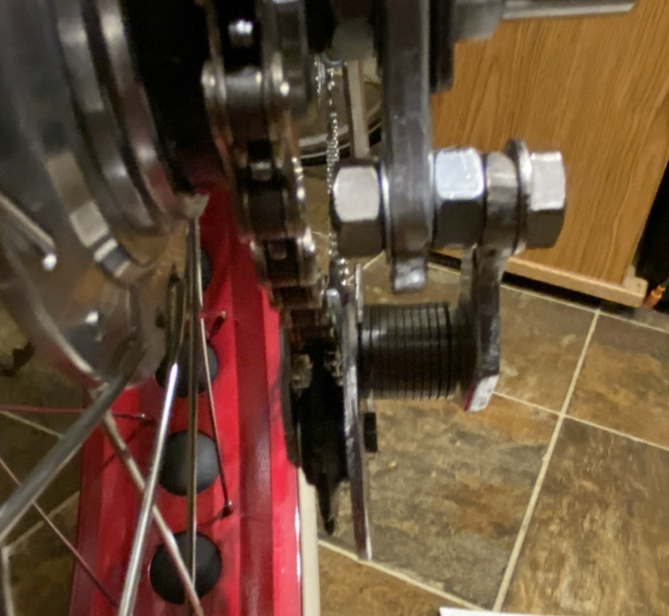 Also, I bobbed off the hook from my hanger, and drilled a 5/16 hole as far as I could from the pin. 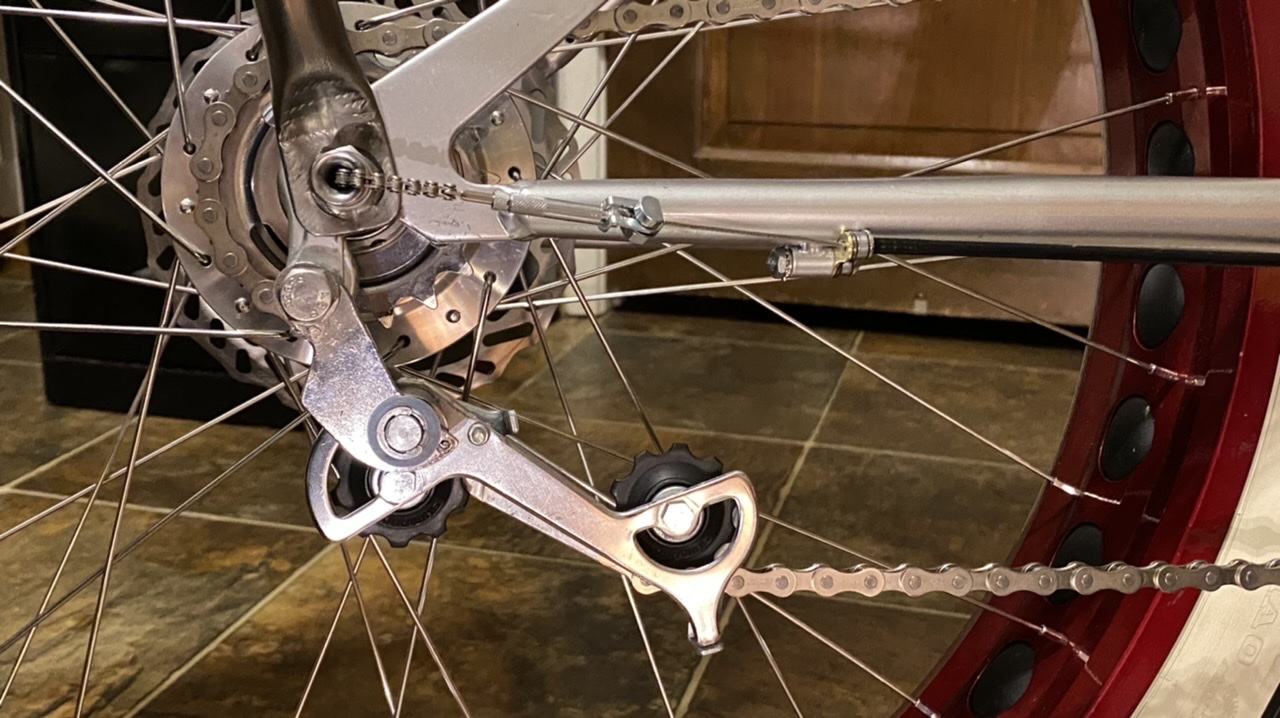 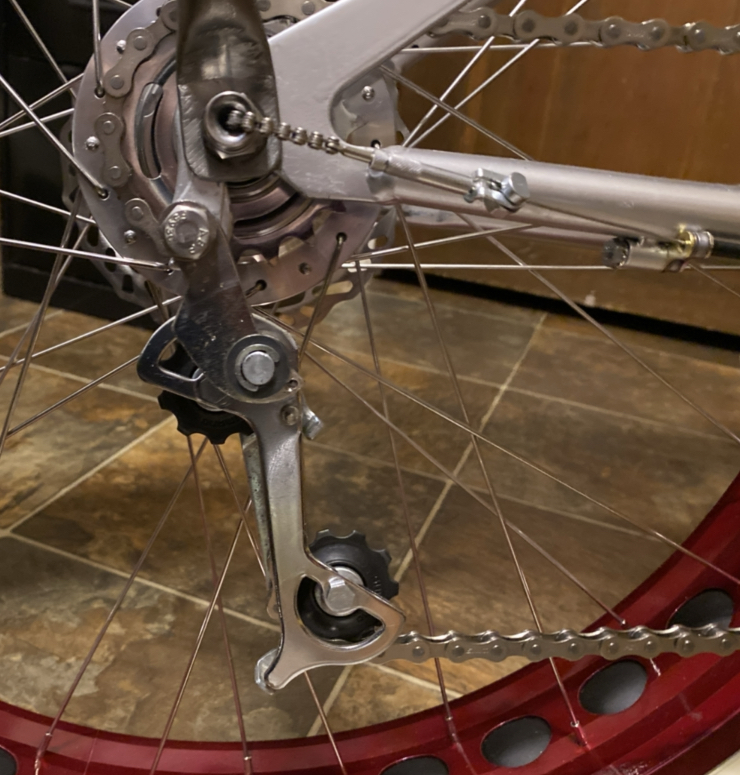 This all cleaned up the assembly a little more, and it increased the clearance between the sprocket and the idler. That’s solved my growling problem.

I still haven’t welded on the bushing and I’m afraid it’s going to wiggle loose if I ride too much before I do that, so this will probably come apart again tomorrow.

LOL yeah . . . It wiggled loose. But the bike rides great, even with it loose. It cannot come off because of the Belleville washer & circlip.

The reason it came loose was that I let it snap hard, like a mouse trap, while I was assembling it. I had not yet trimmed the bolt and it was long enough to smack into the hanger arm full force. Thank God my finger wasn’t in the way.

I will have to weld this and ream it out again. Tomorrow. 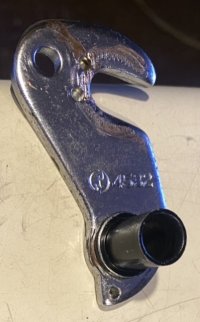 I just realized that this is a photograph before I drilled that hole out to 5/16 and cut the hook off.

I went for a good ride this morning and everything worked great in high range and it skipped in low range and I couldn’t figure out why. I went out and came back and did adjustments a couple times and I could not get it to stop.

This upset me a lot because I certainly don’t wanna add any more spring tension on to my chain. It has as much as any ordinary (well worn) derailleur right now.

But I made a rookie mistake. It was hot and I didn’t want to drag the bike out to the boat yard, And I didn’t wanna drag the bicycle stand into the garage. I put this together and took it out without ever running it up on the stand.

10 seconds after I did that I discovered this tight link. 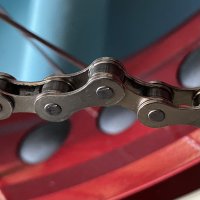 I smoothed it right out with my fingers & it just barely catches, but it’s enough that it goes over the idler crooked.

So I’m pretty sure that this is the whole problem right now. I’m gonna take this assembly apart and do that welding so it will be nice and solid and I will fix this tight link.

This bike has had several different front sprockets and two different hubs, And in the process I’ve spliced this chain about six times.

I did a crappy job on the last one.

I decided not to drag out the welder just for that one little job; but I did fix the tight link, did the final adjustment, rode the bike, and everything works great now! 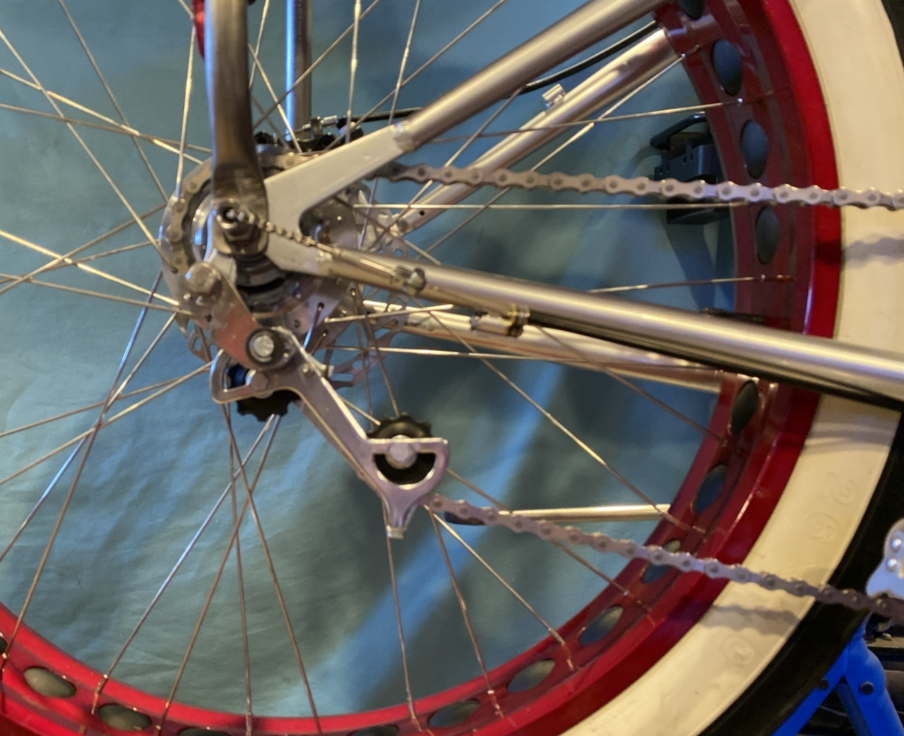 That’s in high range, and this is in low range: 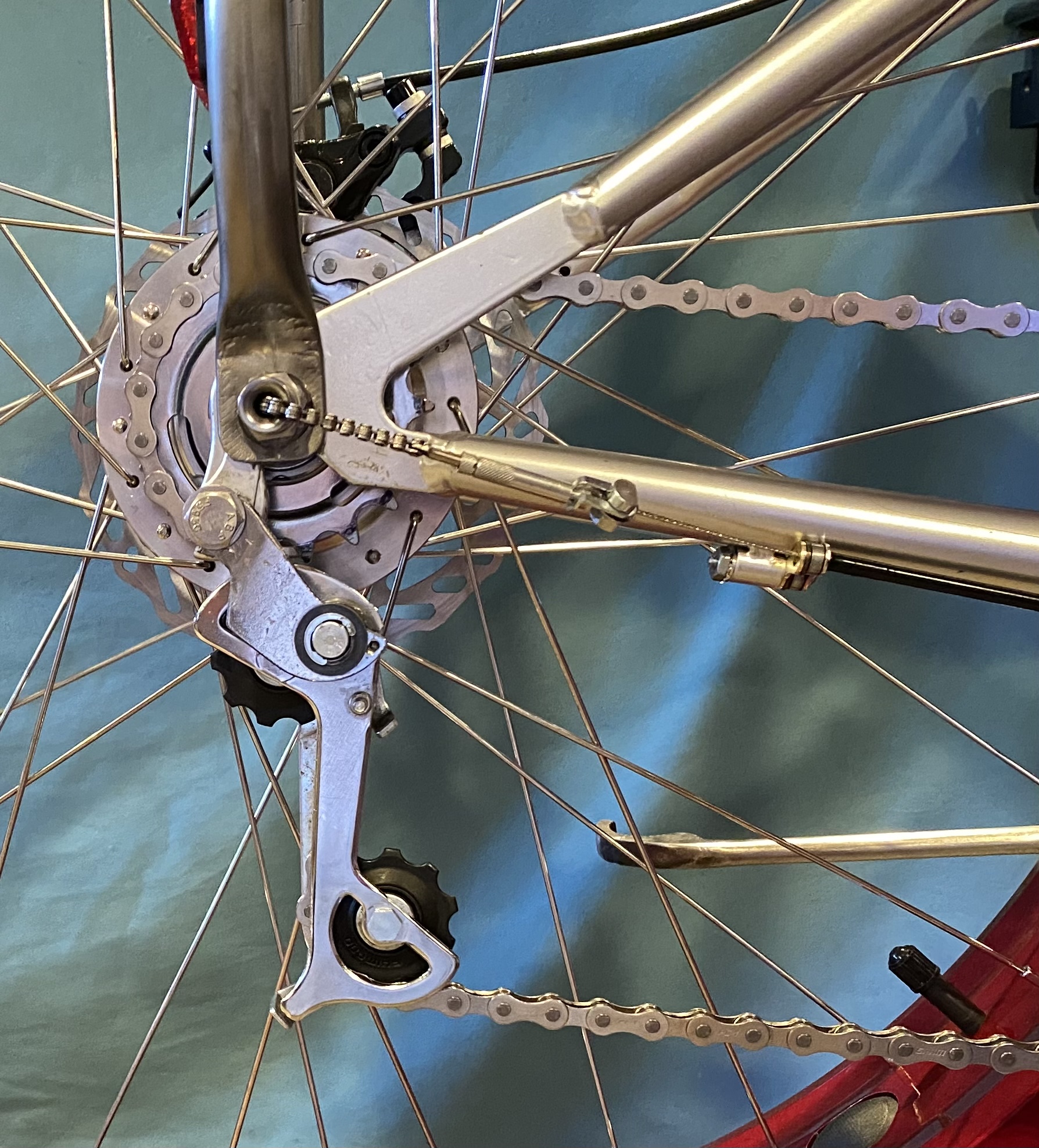 In fact it is the best ever on this bike, even though the hanger is slightly sloppy because I haven’t welded it yet.

That doesn’t seem to affect the performance; and now I’m thinking that if I stiffen it up by welding, it might actually be noisier because of differential chain alignments with two front sprockets.

That is to say, the chain doesn’t always come from the same place as it comes into the tensioner.

I also thought those lumpy bio-pace sprockets might be causing some of the slipping. This is not the case at all.

By some miracle of computer engineering, as you turn that lumpy sprocket, chain sag does not alter.

I literally ran this drive with my finger as the chain tensioner and you can barely feel a change in pressure.

I threw a photograph in here so people will read all the way to the end. 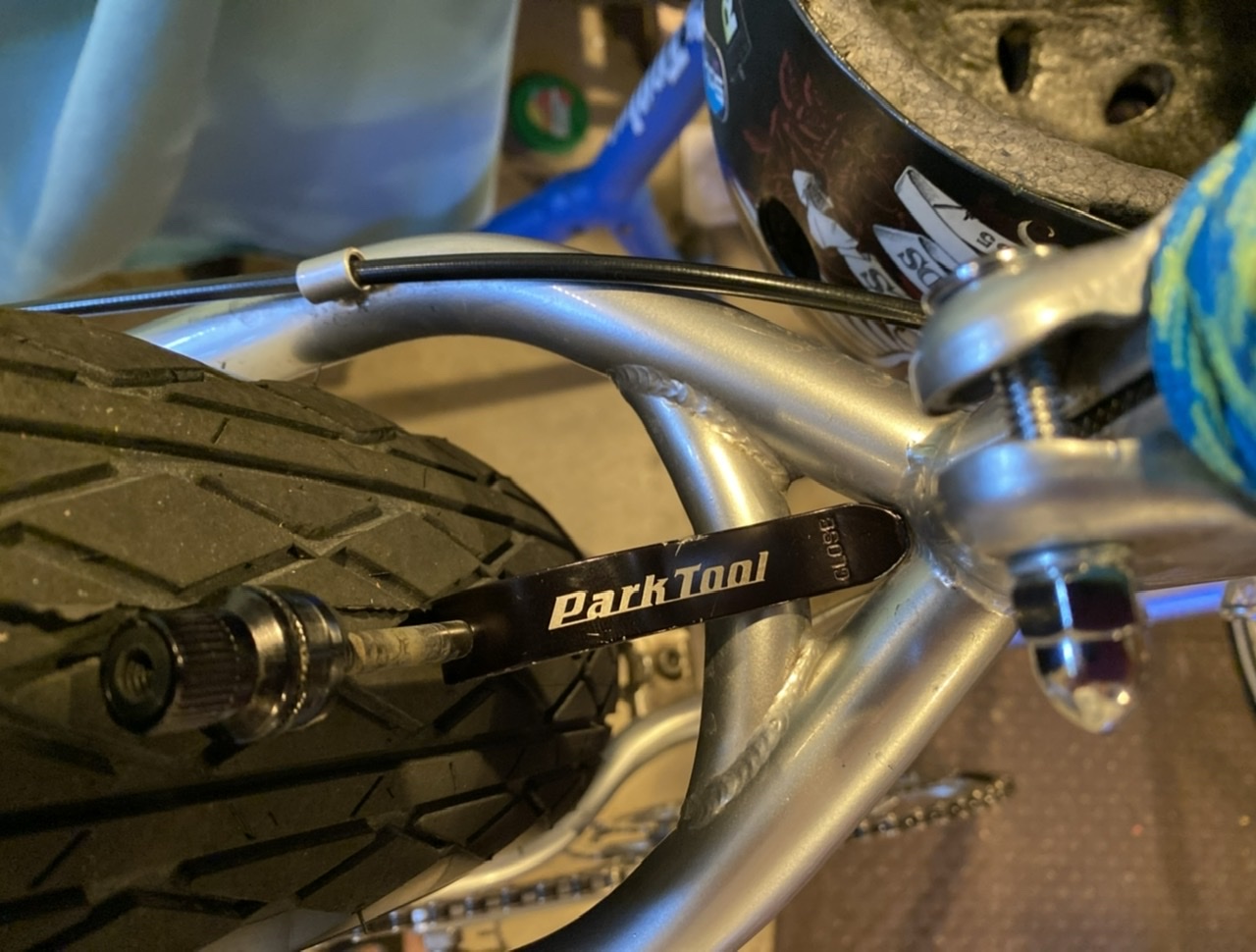 I took off my Park quick release and put a Chrome bolt on the seat because I love where it is and nobody else gets to ride this bike. (Normally I get this look of fear, so I quit asking people.)

I’m trying to figure out how to trim the frame, extend it and lower it. The tensioner hanger must clear when I am done. 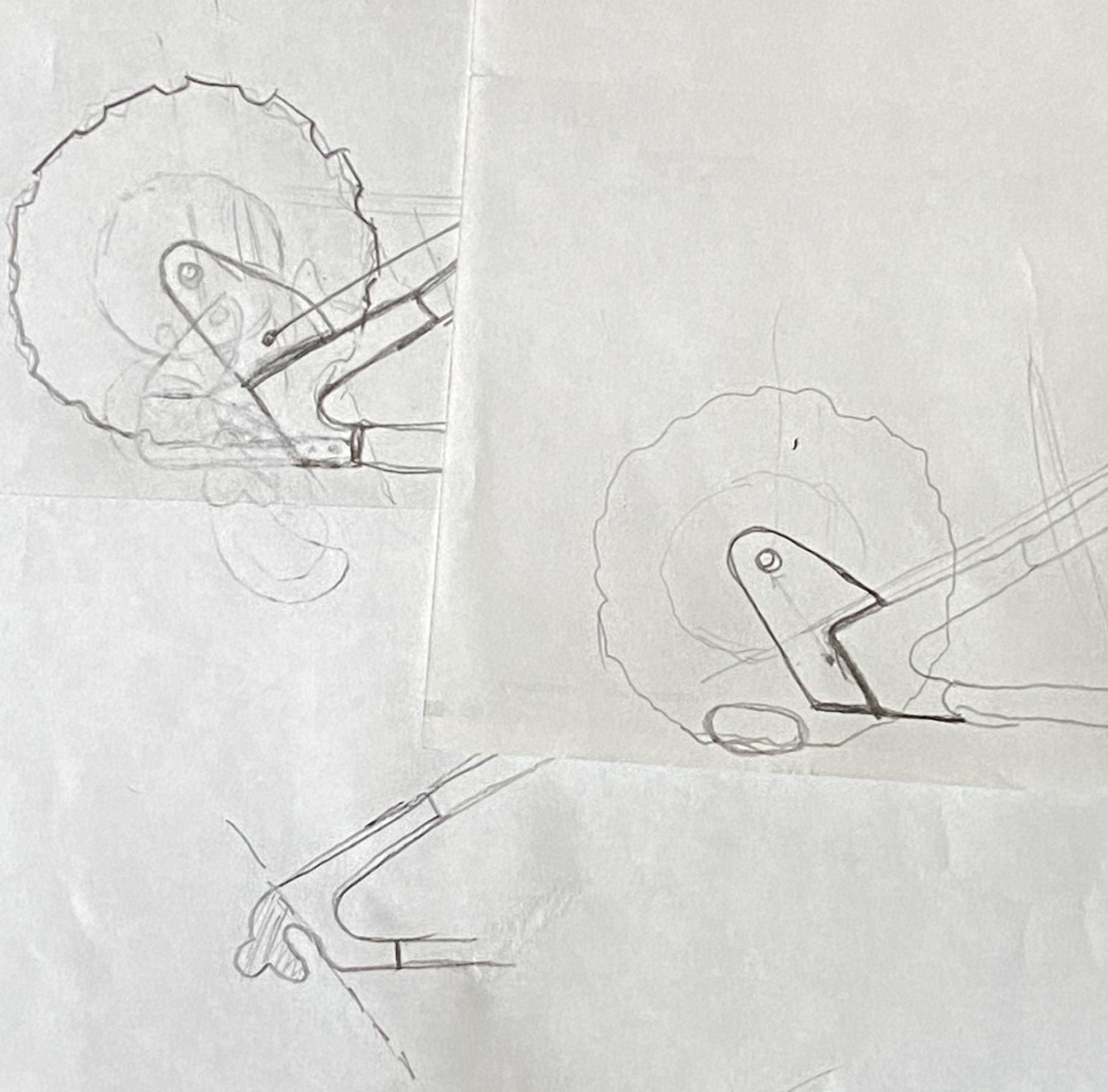 Also I would like to invert the disc brake and run it down low. Unfortunately that makes the cable go on the opposite direction, so I would be stuck with the traveling noodle arrangement.

And of course I have to mount the sissy bar, and I really don’t want to put it on the axle. That would be the most direct load path however, and so it is not an idea without merit.

I haven’t tried to sketch any of that yet.

I had to suffer the indignity of the black derailleur, but it allows me to use both front cogs.

Photographs after I shower. I’ve been out riding like a madman, and it is my second time out today.
Click to expand...

That chain tension looks about perfect for your high and low range. I think you are right about welding the hanger, I'd leave it for the ability to adjust for road conditions, and pedal input. This is a concept I've been wanting to try for a few years now. Looks like you've got it down pat. Diggin' the fat rear wheel / tire combo too!

I still like riding my 'banana seat - big boy muscle - high handlebar' bikes as well or better than any that I have in the stable.
2019 Builds in RRB Build-Offs:
" Helen Wheels" " Trans-MIG- RaT " " RaTsberry Buffet"

I have been toying with the idea that I should straighten out the backbone line on this bike, but right now the seatstays kick down 20° more than the top tube.

I just need to cut a 20° bite out right at the seat post, bend up, and then weld it approximately where it’s welded now.

It’s going to wind up making the drop out plates pretty tall.

I didn’t get too much done today except playing with possible stick shifter bits. I did lace a little 16 inch coaster brake wheel.

I spent some time today playing with the tensioner alignment and adjustments. It’s quieter now but it doesn’t look any better.

I put an extra screw in the kickstand. It didn’t stay in alignment, because it’s so long it loosens its own bolt under use. With some Loctite and the extra screw it should not move out of position.