A Simple Plan From a Complicated Man

Rating - 100%
6   0   0
We have been told time and again that simplicity is the hallmark of fine design. That's probably true. After seeing so many cool polished builds on this forum I wanted to join in. I knew my chassis would have to be a Felt Cruiselite frame. I knew I wanted 3G wide rims and cool looking tires. I knew I wanted twin chains and twin rear freewheels. I had a budget. I had a complicated plan. Things don't always work out the way that I plan for them to and in this case not a thing was wrong with that.

I had an itch. One night while working late my Spidey sense tingled which could only mean one thing: I'm Spider Man. Since I am Spider Man, I immediately went to the bikes section of Craigslist and there it was: a reasonable priced Felt Slater - all original. I called the guy, I emailed the guy, I called and emailed the guy - no response. Fudge! He'd sold it or was at a movie. I had no idea which was the case. I never did ask. The next day, a lovely Los Angeles Saturday morning, I called him. I emailed him. I called and emailed him. Finally, he called back to inform me the bike had been sold. Fudge!! Like I mentioned, I am Spider Man, and the owner of two Boy Scout canteens, so I already had the cash in my hands. He mentioned the buyer hadn't came with the money yet. He mentioned the guy wasn't returning his calls - maybe the guy was watching a movie? I don't know or care. I told him that I didn't want to jump another bike fan's claim. I would consider the bike sold. The adage of my friend Thomas' uncle is true: "If you give up some fo' sho' money for some mo' money you might end up with no money." My phone rang again.

"I guess the guy is never gonna call. Come and get it." He said.

30 minutes later I was lost in his neighborhood and then the clouds parted and I found a divine light shining down on his house. I parked near some discarded couches and a small barking dog. He came to the gate and let me in. Spider webs were all over the bike so my confirmation bias tingled and I knew the bike was for me. 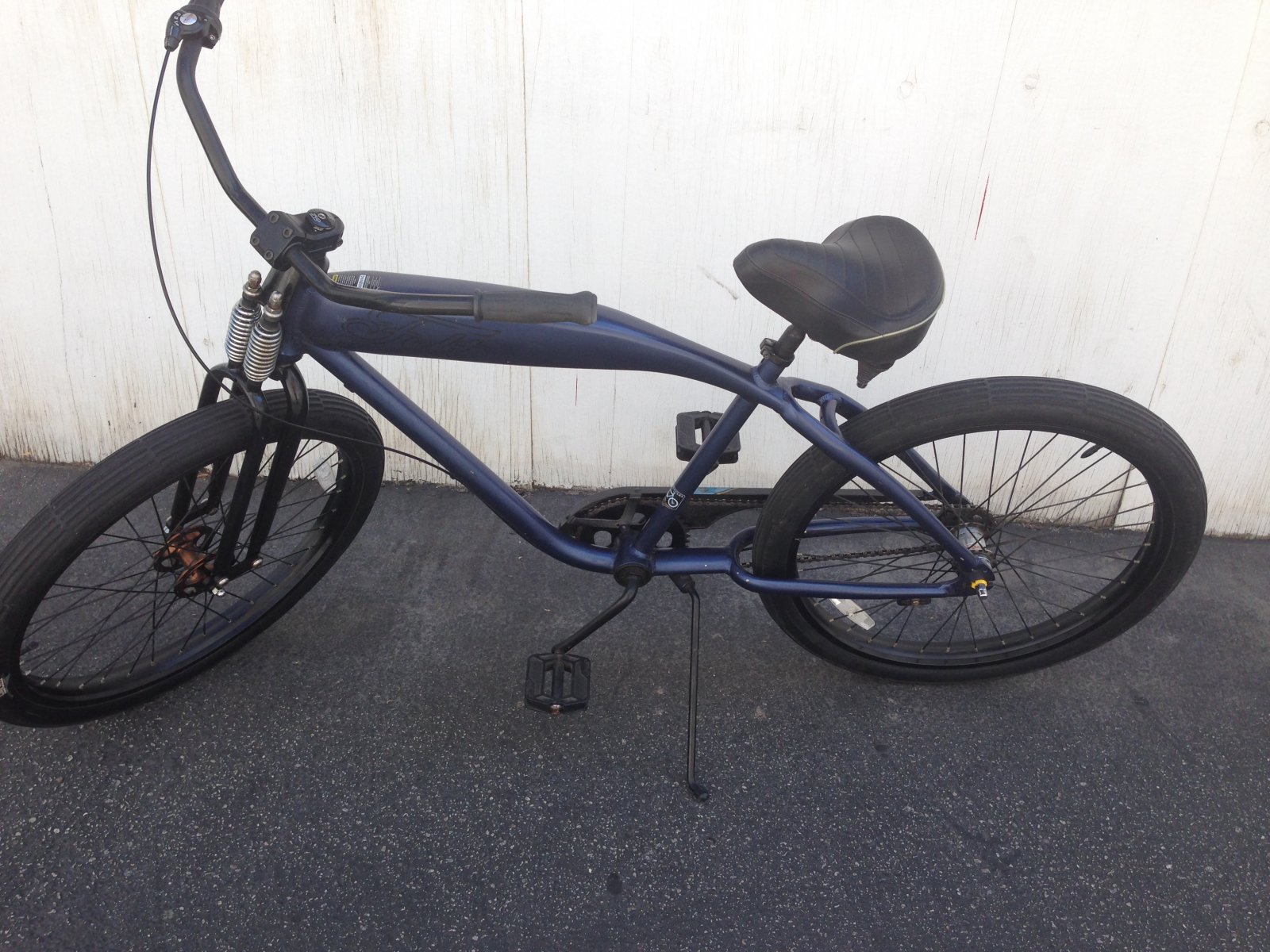 One Felt Slater in good condition. The paint had some light scratches, the decals were also past perfection and the front hub's anodizing had faded to a sweet bronze color. Without haggling, I paid full price. This was a kid putting himself through college and I had been there and done that. He was amazed that I didn't want to ride it. I had no intention of using anything other than the frame and seat clamp. I had everything else ready to go or so I thought.

I just happened to be making a trip to Powder Coating Maniacs in Torrance, CA to drop off a KHS cruiser that I was building for my ex-girlfriend. I thought, I may as well drop this puppy off too and have them shoot it in SpectraCoat's sky blue and polish another Felt later. I was missing the blue "Yale" that I sold. I noticed this bike had no weld down the center of the top tube. It was the perfect choice for either building another "Thunder Star" Felt cruiser or polishing that puppy up, adding a sH#+ load of rivets, some bomber decals and all the other stuff that would have made it a carbon copy of what others had done with a crappy job of riveting because I don't know how to rivet anything well. Other than the crappy rivets part - that was the plan. At any time I have enough parts to build three diverse bikes with the exception of the frame. I have a pair of Girvins in my kitchen. I have another pair behind my couch. I have a third pair at the polishers. That's three pair shy of too many. Yes ladies, I'm single so my apartment is also a bike customization shop. 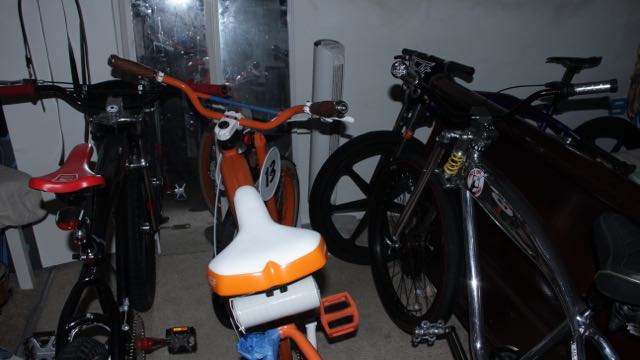 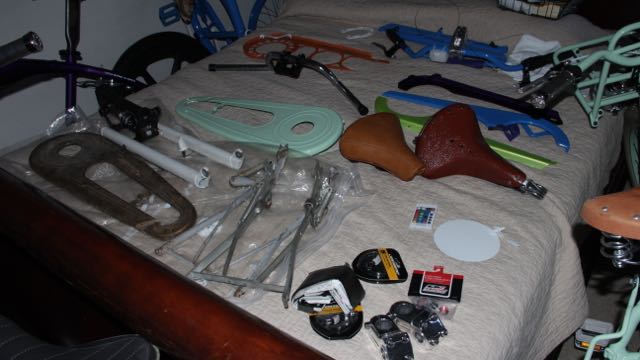 What you see above was moved out of my living room so the carpets could be cleaned. I have since moved this stuff back in the living room neatly, and into my parts closet - yes, that is a thing.

The moment I wanted to polish it I tossed out the thought of using the Abraham Linkage forks. I had a set of Girvins that I knew was aluminum and figured it would polish out well. I order two half-link chains to keep this sucker strong. I wanted dual chain wheels which would mimic the Clemtwins I had when I was a kid. I conjured up a set of Mosh Digi cranks of off eBay. I took my sweet brand new disassembled 3G wheels along with a set of flip-hubs to Studio Cycle Co. in Studio City,CA for Pete to build the wheels. This was going to be great! No. No it was not going to be great. Pete informed me the hubs I have wouldn't work as a hub for dual rear cogs. The right side would simply spin itself off. Fudge! In addition to that the spokes would be too short. Further fudge! I asked him about which hub to get he had some suggestions and I went to eBay to look.

Knowing that I wanted nearly everything on the bike to be polished I went to Astro Polishing and Plating in Van Nuys, CA and dropped essentially, an entire bicycle sans wheels off for polishing. I thought it might look nice. I had worked with Astro before on some other restoration projects and was very happy with them. I thought the price was a bit high until I unwrapped it all. 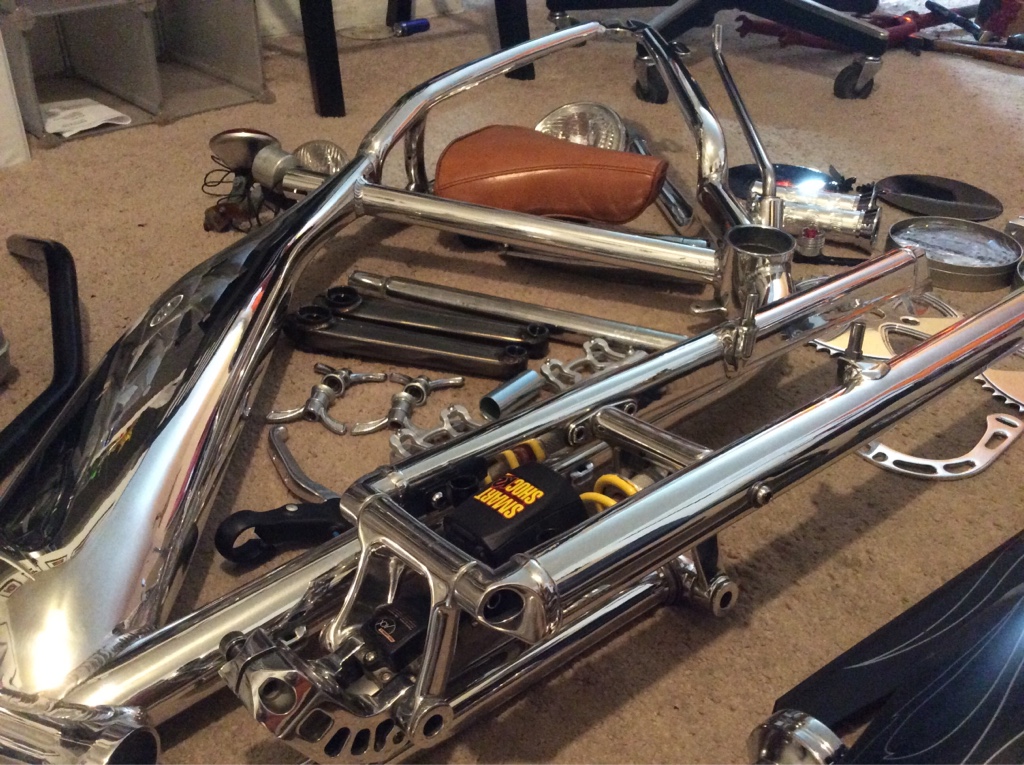 I gently placed my eyeballs back in my head. The polishing job took about a week or so to get back and was well worth the wait. By then my decals had arrived. I used a model from a Vogue cover and the bomb from "The F-bomb" Camaro. 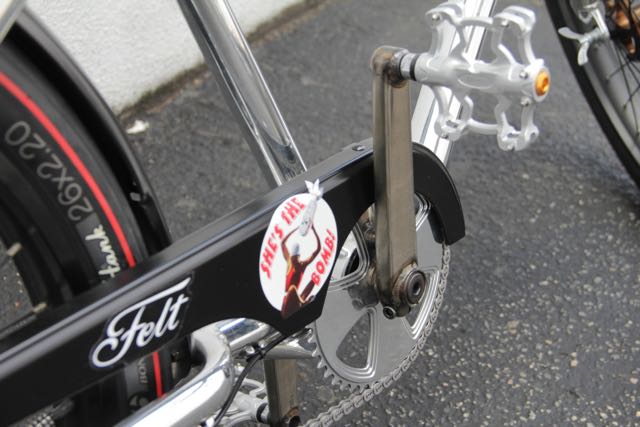 As I stared at everything on the floor reality set in. Reality may not be the prettiest companion but it's the best. My GT Rhythm hub from eBay was great but I couldn't find the proper sized cog to fit the other side. The spokes would've worked but the cracks in the plan had already begun to form. I spent a few more bucks. The "REMOVE BEFORE FLIGHT" key chain ring arrived. A new shifter arrived. The Bontrager Hank tires that were collecting dust in my closet came out. The 26" Felt rims which were for sale were now in play so I yanked them off craigslist. I removed the Felt Circuit tires and mounted the Bontragers. They looked good leaning against the living room wall but you just don't know until you see it all together. The seat post wouldn't fit the Persons seat - out, dual chain guards were out, dual chains were scrapped, dual chain wheels were out. Felt low rise cross bars would cost $70 to chrome so that idea went out too. What I was left with was a very good looking frame and fork, stock wheels, stock seat, stock seat post, stock seat clamp, stock handle bars, new cranks, new pedals, new stem and new grips. Due to circumstances beyond my wallet and time I simplified. I shot the chain guard and handle bars in flat black. Instead of using the old flawless chain guard and fenders from one of my Felt Baron 2s I went with a front fender in the rear and shot that in flat black too. No regrets. I like a clean flush look when I can get it. The stem I used gave me that. Oddly enough, I dropped off a pair of Felt Drop Ten stems for polishing and they look far better than what is on the bike now so the flush stem is funkin' out and the Felt Drop Ten in funkin' in.

I put the bike together using sealed bearings and a whole lotta care. There was also some speed involved. There was no paint or powder coat to scratch on the frame. The bike seemed to rise up from my lightly soiled carpets. Instead of disc brakes - coaster brakes. Instead of chrome cross bars - stock bars. Instead of those ...... 3G wheels - stock wheels. Instead of the antique Persons seat - the stock seat. Instead of an eBay rear light, I took some of my creativity, a shower knob, a skull from my ex-girlfriend's old grips along with a used brake light and made the light mounted beneath the seat. Instead of nuts on the front rim - wing nuts. There is one that I wanted to be in the win column. That was part of the original simple plan from a complicated man. Good for me. .... works out sometimes. I like that. 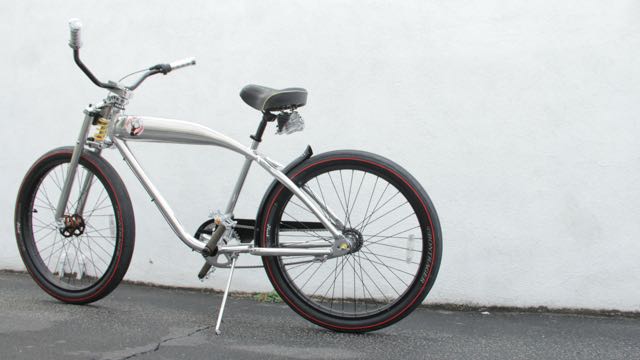 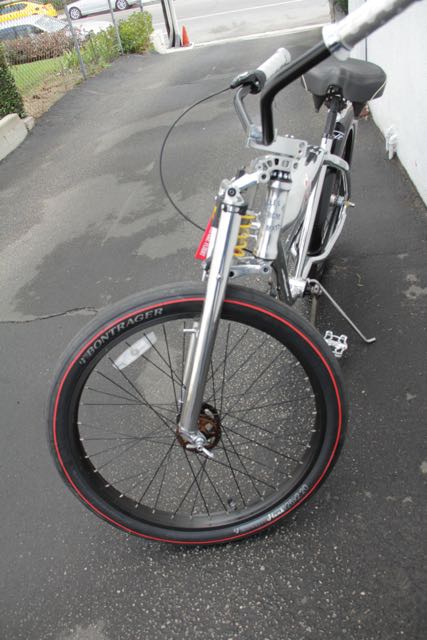 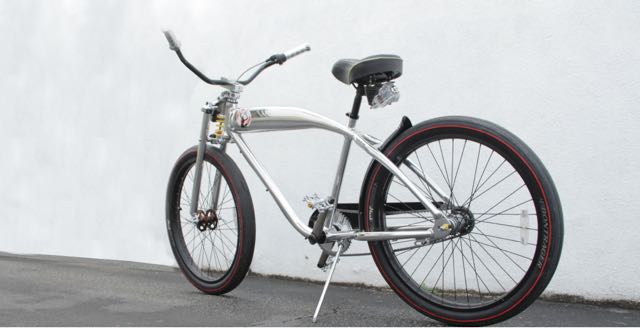 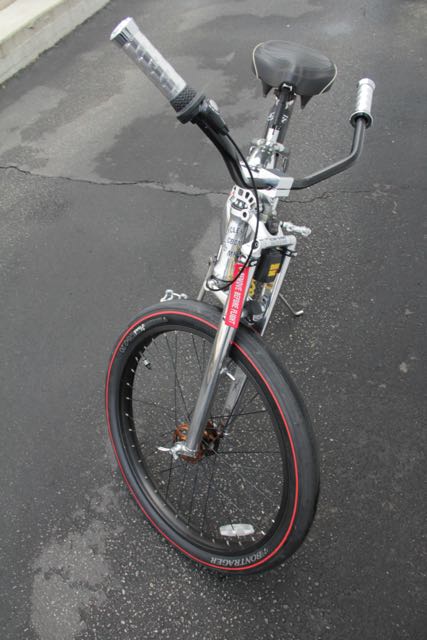 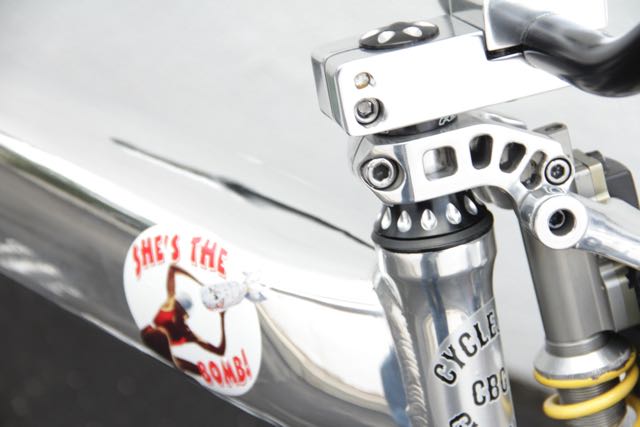 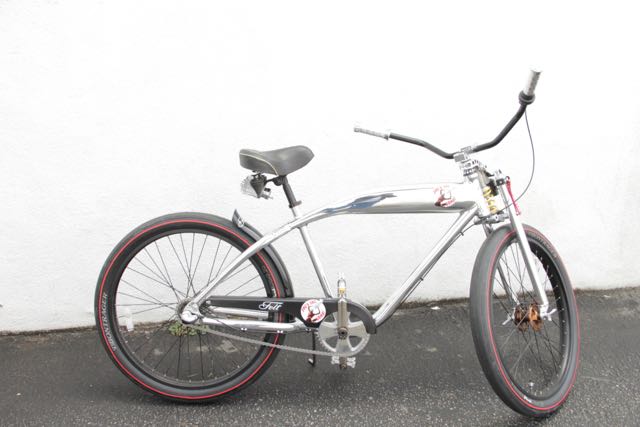 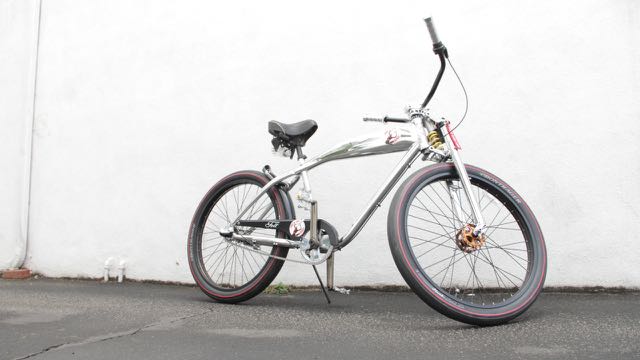 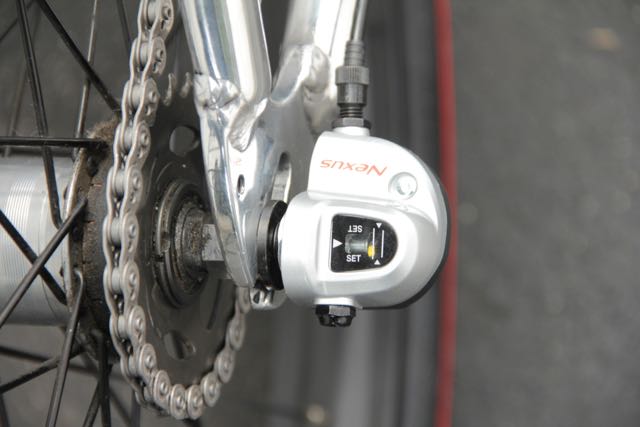 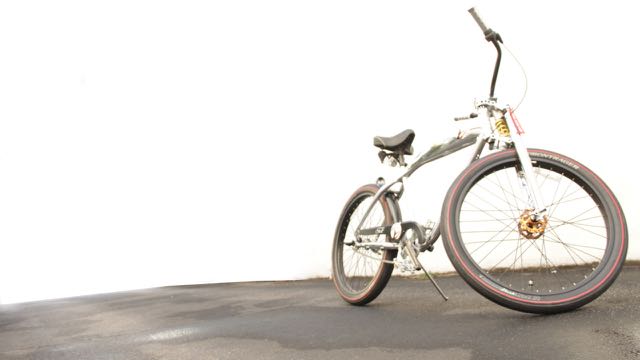 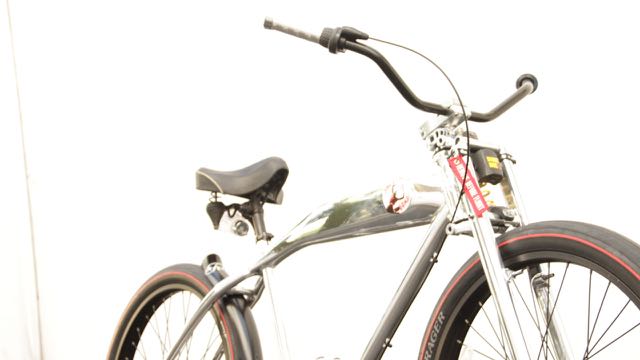 The rains came down but gave me a break. I popped in the memory card in the old 60D and stepped into the light with the bike. It glistened in the sun. Heck, this thing glistens in my living room. Pete from Studio Cycle Co. claims this to be his favorite one of my builds. I like it a lot. It was my favorite too until my Little [email protected][email protected] came back from his shop. Pete, I don't know if you'll ever read this but the time is about 130.

Thank you. It is amazingly comfortable.

Thank you for reading and commenting, I will do write ups for my other build too over the next few weeks.

Thank you for reading and commenting, Luke.