Rating - 0%
0   0   0
What a fun forum, I haven’t read anything this interesting since freakbike.org

I’m an old retired geezer who used to re-build and modify bicycles as a kid back in the 1960s. We built quite a few freakbikes with some awful welding . . . LOL

I built up normal bikes for my own children, but I’ve only built one bicycle for myself since then. A ‘70’s Schwinn Varsity I made into an urban cruiser.

Right now we only have one bicycle: a Taiwan made Nishiki which I bought my wife in 1990. It turned out to be a fine bike for the $200.

My wife broke her knee in 2018 & is just starting to ride again. I oiled up the Nishiki & welded up a little cart for her to pull to the grocery (under 1 mile away.) I don’t have a basket on it yet. 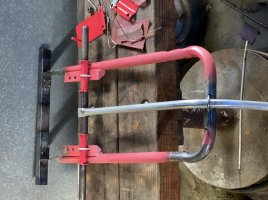 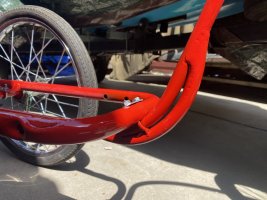 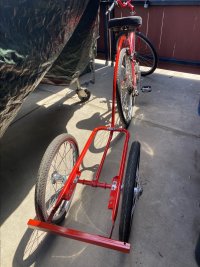 In fact I decided to widen it a couple inches so that it would be easier to find a basket that would fit on there already made.

Anyhow I am going to build a bicycle for myself to ride. From what I can see on eBay, things have changed an awful lot in the bicycle world, and I need some serious advice.

I was hoping you guys could direct me to some decent bicycle parts. More data on that soon . . .

This was a welding cylinder cart from Harbor freight salvage.

I modified it to go through skinny doors to use as an aquarium service cart. That’s why the axle is so short in the pix.

BUT…I sleeved the axle and torch welded it (because I can’t turn a new axle.)

It’s 13”+ between the hubs now, scorched, and needs repainting.

I will Post some better pictures after I repaint it, put on the basket, and polish up the old Nishiki.

Just build an old bike up for yourself, and you won't need to learn about any new-fangled stuff!

I think it has a Sturmey-archer hub, and those are no mystery. I laced one to a fat Western Flyer wheel for my Schwinn Tornado.

Anyhow that would be a start.

Rating - 100%
1   0   0
Sturmey is still the good stuff. Some will buy a bike just for the hub and parts, strip it down and add them to a frame with more style. Look around here for a bit, there is inspiration to be found for every style and ability level. In a week or so, the big Build Off contest begins, and people really showcase some amazing things... Maybe you will be so motivated, you'll put a bike in the ring...
Fun has no cost, only worth.

Rating - 0%
0   0   0
I was going to post still shots from a video of me taking my first ride on my newly refurbished bike. Turns out my camera was on selfie. This is an old photo of me in a skate helmet. I post this one if I want to look Devil May care. No I didn’t actually knock that tooth out in a bar fight. I had a crooked tooth since youth and I had the doctor fix it. But it was missing for about a month while they made the new one and I got to gross out a lot of people.

Here I am with the new tooth. Photos of me with the bike very soon guys but I need to shower after my first ride.

But you can fool him for a while, & if you’re lucky, for a good long while.

Those pictures were taken when I was almost 57, which was the last time I was in any kind of a skateboard race. Even then it was just ceremonial, because I was a sponsor. And the only person over 30.

Another hobby or two