January we headed out to Geneva IL

Xc204, Oldgreaser and myself and kids got a nice winter ride in.

Down by the river

February was way cool! Weather was good !
We met at the Burger Bar. Then headed over to Cycle Smithy's in Lincoln Park.
Mark the owner was nice enough to give us a tour of his cool vintage bike collection.


islnder102's truck ready to be unloaded

Inside CYCLE SMITHY getting a tour from owner Mark

XC204 trying to figure out if he can get a set of wheels with modern wood rims home on the train :lol:

One for you BMX guys

In front of CYCLE SMITHY

If you are ever in Chicago check this place out! http://www.cyclesmithy.com/ :mrgreen:


What it looked like when my two sons and I left the house :roll:

with high temps in the 40's and hard rain forecast for the whole day NO surprise that we where the only ones to show
After the boys and I had lunch the rain stopped and we got a GREAT ride in!

Dark sky stayed to the north

A video of Taber my 10 year old son on my Monark :shock: :shock: LOOK OUT!

April.... Just Highridah,Maggie and Oldgreaser and my kids
We met at Twisted Spoke and rode over to Humboldt park

Just a Chicago Cruiser out for a ride

They have some super clean killer bikes!

Hanging out by the Puerto Rican Flag

MAY.... WAS A BLAST!
We did are first Ride in Indiana At MarkM's house

Hanging out in front of Marks house....

Mark was not kidding FREE STUFF! for everyone! just some of my goodies :wink: :mrgreen:

oldgreaser (Rik)Trying out The Indiana Blackout.......It has been said before Uncle Stretch is a genius!!

Mark cruising the Blackout LOVE THE SMILE .....Hope things are good for you man!!!!!

oldgreaser and his son Johnny ready to ride

we rode in a lite rain no big deal still a great time!

Johnny on one of Marks cool Trikes

Me trying to ride the clown bike

If I could just get a lay back seat post :roll:

Mark cooked us up some awesome BBQ over a wood fire!

A mock up of the Trike for Islndr102

Finally after more then a year of doing these rides we got a group photo!

From the drivers seat looking back

June.....
xc204, Oldgreaser , Myself and my two boys met at the Revolution Bar and then rode back down to Humboldt park for the most eclectic car show ever!!!

My two boys hanging out at Revolution Brewery

Gary (XC204) and Garret showing of there RRB shirts

Now some bikes .....the Chicago Cruisers had all of there bikes at the show

Check out the slide show of cool cars... everything under the sun was at this show!
http://s454.photobucket.com/albums/qq26 ... =slideshow

July
Tour De Fat in Chicago Myself and my wife Lisa and the kids Plus Oldgreaser and his son johnny made the ride!


Me with a bad attempt of taking pics well riding :roll:

Took pics of these two cool Rat Rods..... Turned out to be RRB Member Moto66's bikes!! Great to meet you today!

Member Monstar was there with his cool bike missed him that day . But he did find a cool pic of me riding Bluex :wink:

I was out there too! It was a great day for beer, bikes and music. I will post pictures later today. I did find this one of you Skip on flickr that someone from timeout chicago posted. I was near the front of the parade with my ride.

My bike just before the Tour De Fat 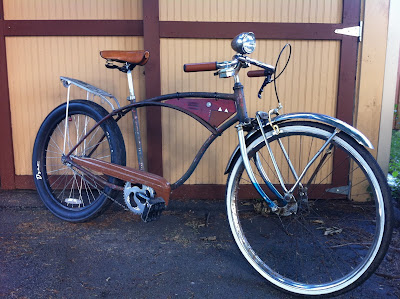 August Ride was prefect!!!! Great turn out And great weather!!
Rode down the lake front Could not have been a nicer day!

September I Chickened Out the rain all morning scared me!
Oldgreaser was the only one to show up for a lake front ride!

I was there, and a little misty rain didn't dampen my spirit,

Headed South to Lincoln park, then west to Broadway and made a stop at Cycle Smithy, Catch the crew soon for an October Ride,
Click to expand...

October event I also missed!
But there was a good RatRodBikes turn out at the FOX VALLEY BIKETOBERFEST...


XC204 said:
Had fun at the show / swap meet glad to meet some fellow ratrodders Brian /Tailwinds and wife Awesome best of show bike , Scott Brownsey and friend with 2 Bad to the bone Ratrod bikes. Chef from the Chicago Cruisers and company. Ben /Ratina and dad. Earl / Teabeats Thanks to Main St Bikes and DJ Rudy K for putting on the show.

A beauty J.C. Higgins also a winner And Scotts bike a winner also

some smucks bikes. And the green stingray thingy a winner also,

November.... We met in my neighborhood
Oldgreaser (Rik)and his wife Lisa and XC204 (Gary) and my kids got one last ride in!

Rode down to Clark and Montrose to meet Gary .. Parked at the 7-11 was Adam from Pedal To The People.
Really nice guy with a cool setup! http://pedaltothepeople.com/

Rode down to Clark and Montrose to meet Gary .. Park at the 7-11 was Adam from Pedal To The People.
Really nice guy with a cool setup! http://pedaltothepeople.com/

THANKS TO EVERYONE! WHO CAME OUT FOR A RIDE IN 2011

Location
just a wind on the road

Rating - 0%
0   0   0
i wish more rides like that happened here. we just have the two mayors rides on memorial and labor day, and then it's still mostly road and mountain bikes.

like seeing the hutch fairing bike too. i have one without the fairing. can't find it most times, and can't afford it when one pops up.
start where you are
use what you have
do what you can. arthur ashe

Rating - 100%
1   0   0
thansk for sharing all the rides and shows look like tons of fun... my aunt live to the left of the P.R. flag off of Sanfransico st right across from Humbolt park.. great year of riding indeed.

Rating - 0%
0   0   0
Cool stuff. Nice to see groups getting together like this.
Randy
On Instagram @locojoe - Our Bicycle Blog - Coasters Bicycle Club

Rating - 0%
0   0   0
Thanks for all the great pictures! Great scheduling and photography job on them.
Going to try real hard to get down there for one of them this year.

wimpy said:
Thanx for the nice pics! Looks like everybody had lots of fun. So keep up the spirit in 2012.
Btw,are these Nutcase helmets comfortable to wear? 'Cause I like the way they look. 8)
Click to expand...

I do rally like them they are comfortable to wear. and about half the price of a Nutcase helmet.


MplsCoaster said:
Thanks for all the great pictures! Great scheduling and photography job on them.
Going to try real hard to get down there for one of them this year.
Click to expand...

Rating - 100%
1   0   0
NIce job on the year in 2011 year in Reveiw Photo album, Skipton! I had forgotten how much cool stuff we did, This year should be even better.
https://www.facebook.com/pages/Chicago-Taildraggers-Bicycle-Club/167408513381060
chicagotaildraggers on Instagram

oldgreaser said:
NIce job on the year in 2011 year in Reveiw Photo album, Skipton! I had forgotten how much cool stuff we did, This year should be even better.
Click to expand...

I had also forgot all the cool rides we did. Thanks for coming out for so many!

Wednesday at 7:29 AM
Karate Chicken Industries