Ok, first off a bit of history, through my school years I rode quite a few different bikes but kept coming back to BMX bikes, I had some Redline's, GT's and a few others but my favourite of them all and the one I miss the most was my Diamondback. For some reason it seemed just that bit more special than the others.

My Diamondback was probably a basic model but I had it for quite a while as it was a longer frame than most and I have always been on the tall side, it went through many different paint jobs and component sets, I was constantly swapping out bits and pieces for better ones that I found at the dump or swapped for with my friends or bought with my pocket money, and it even became my first modified frame, I was craving a freestyle frame as they were all the rage at the time, (even though I had no trick skills, and still don't) and any I could find or afford were too small for me, so I found an old 10 speed bike with thick seat stays, cut them off and got my Dad to separate the seat stays away from the seat tube on the Diamondback and graft in the longer piece from the road bike going along level with the top tube and suddenly I had a freestyle bike I could fit!

I like to think there is someone out there now with that frame trying to work out what model it is and what it's history is!

So Diamondback BMX's will always have a soft spot with me, but of course I can no longer fit on them standard...

Here is the donor bike for my build this year, a Diamondback Joker:

This is one of the newer heavy weight trick bikes, that have come along in the last 10 years or so. I am finding these bikes pretty regularly now and getting them for good cheap prices.

The good about this style of bike:


The bad about this style of bike:

-Size: Usually far too small for an adult.
-Weight: Can be up to twice the weight of a more traditional BMX.
-Style: Boring double triangle frames.
-Gearing: Most run rather low gearing, these are slow speed trick bikes after all.


So my goal is to build a bike that addresses the bad issues and makes use of the good points too the full.

Size will be addressed with a small wheelbase extension and a large height extension.

Weight is not really an issue for me, even if I added 100lbs to this bike it still would not be anywhere near the weight of some of my other builds, and even when I am done I believe it will still weigh less than a vintage tank bike.

Style is the biggest change I will be making by adding the addition of a built in hydroformed steel tank similar to the one steel Felt bikes use, I will also being throwing in some HotRod flair.


I do not believe this build will be in the running to win the build-off, that is not my goal, I just want to build a really nice bike, pretty much bomb proof and totally reliable, so it will not be over the top crazy, no custom made wheels and hugely complicated drive gearing systems, but I do intend for it to be the nicest finished bike I have done so far, all welds filed and dressed, near perfect paint, quality but not necessarily expensive components and easily capable of being comfortably ridden longer distances.

Here is an early mock up. 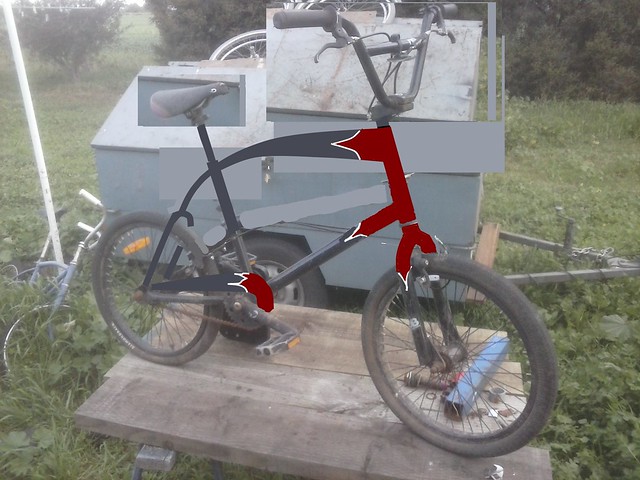 As you can see it is still very much BMX based, but with some vintage ratrodbikes.com ideas and style thrown in.

This should be a good build...
Slammed Trike, Ratted out Huffy, Puch Bobber, The MegaPixieRay and my other builds

I love the look of this thing, can't to see you ride it! If I am seeing this right the top tube at the head tube is about 40inchesish

this bike will be incredible!

WOW love your design!!!!!! this will be a cool build. If I see this right the top tube will be about 40 inches!! you really are a very tall man

jats said:
WOW love your design!!!!!! this will be a cool build. If I see this right the top tube will be about 40 inches!! you really are a very tall man

37" at the front of the top tube if my mock-up is accurate, but it does go down significantly towards the back.

Thanks for your support everyone, hoping to cut it up tomorrow and start the build, if it is not raining...
Mowed the lawn today to get that out of the way, so I don't have to worry about it for a while. Planning ahead...

Here is the hydroformed steel tank I have, it is off one of those crazy designed Kent mountain bikes: 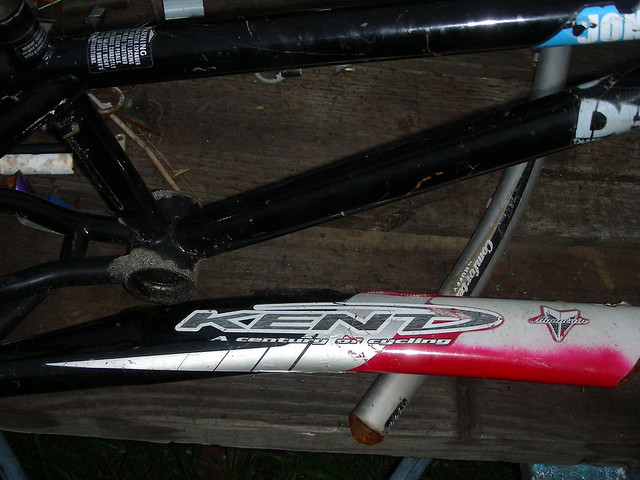 Here is roughly where it will end up on the bike: 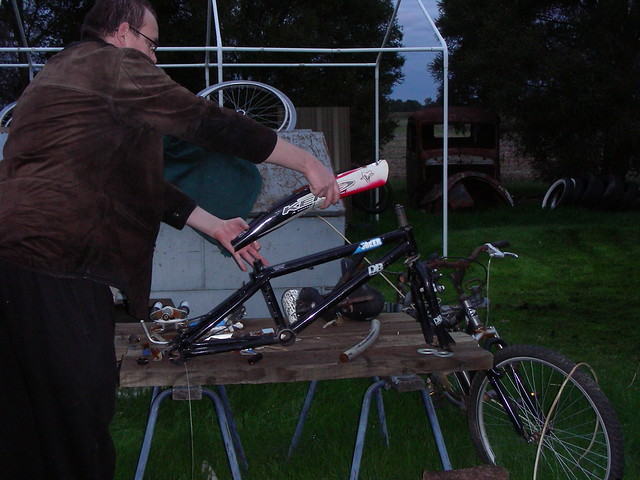 jats said:
WOW love your design!!!!!! this will be a cool build. If I see this right the top tube will be about 40 inches!! you really are a very tall man

Loving were you are going with this I have a massive soft spot for the old diamond backs as I had quite a few as a yound lad.

grasscutta said:
Loving were you are going with this I have a massive soft spot for the old diamond backs as I had quite a few as a yound lad.

Not sure why Diamondbacks seem to inspire such a hold on peoples memories, but they do!

Cause Diamond backs are STRONG!
That's why you remember, couldn't kill!
Mongoose Moose, Diamond Back Elk???
Cool build Luke.
Find a more efficient machine and I might, stop liking bicycles!

Need to talk to the moderators about a rule change... the rules state bike must be ridable...in your case must be able to do a freestyle trick on bike...

Gold Street Customs said:
Need to talk to the moderators about a rule change... the rules state bike must be ridable...in your case must be able to do a freestyle trick on bike...

I was wondering how you were going to do the top bar...

Cool build idea...
Slammed Trike, Ratted out Huffy, Puch Bobber, The MegaPixieRay and my other builds

Great story and plan!!
I gave my Great Nephew a Diamondback a couple of years ago because it had the best stuff going.
Best of Luck!

www.studiolum.com/wang/lubok
it's all about the bikes, man. http://www.ratrodbikes.com/forum/index.php?threads/deormans-gallery.104059/
I was going to update my sig line, but I'm not seein' anything worth plagiarizing right now.

This should be fun. No one can accuse you of building the same thing over and over!
Ask me about TRM Convertible Tanks!​