Okay, so when I originally built this bike, there were a bunch of finishing details I didn't get to add to Dumpster Diamond. I had to settle for a "good enough" design in order to meet the September 1st deadline for the 15th annual Rat Rod Bikes Build Off. I think it looked okay in the end, but I knew I'd want to revisit this bike again at some point. Well, I still have some cash left in my bike build fund, plus some additional "play money" from Christmas and my birthday. So, Dumpster Diamond's getting rebuilt, hopefully even better than before.

I did some more mockups on Friday last week, mostly so I'd have something to trace over in Photoshop. Here, I'm exploring my earlier ideas for a custom triple tree fork and a set of stealth cup holders disguised as a V-twin engine. I know I want the triple tree fork to happen, so that most likely will be the first new element I tackle, but I'm still not sure about the fake engine. My original plan for that engine was to add a false down bar to make the frame look more like a motorcycle's, but the more I looked at that false down bar illustration, the more it made me think of a cow's udder. It just didn't look right. I'm also still not sure how I'd build this engine and make it functional. 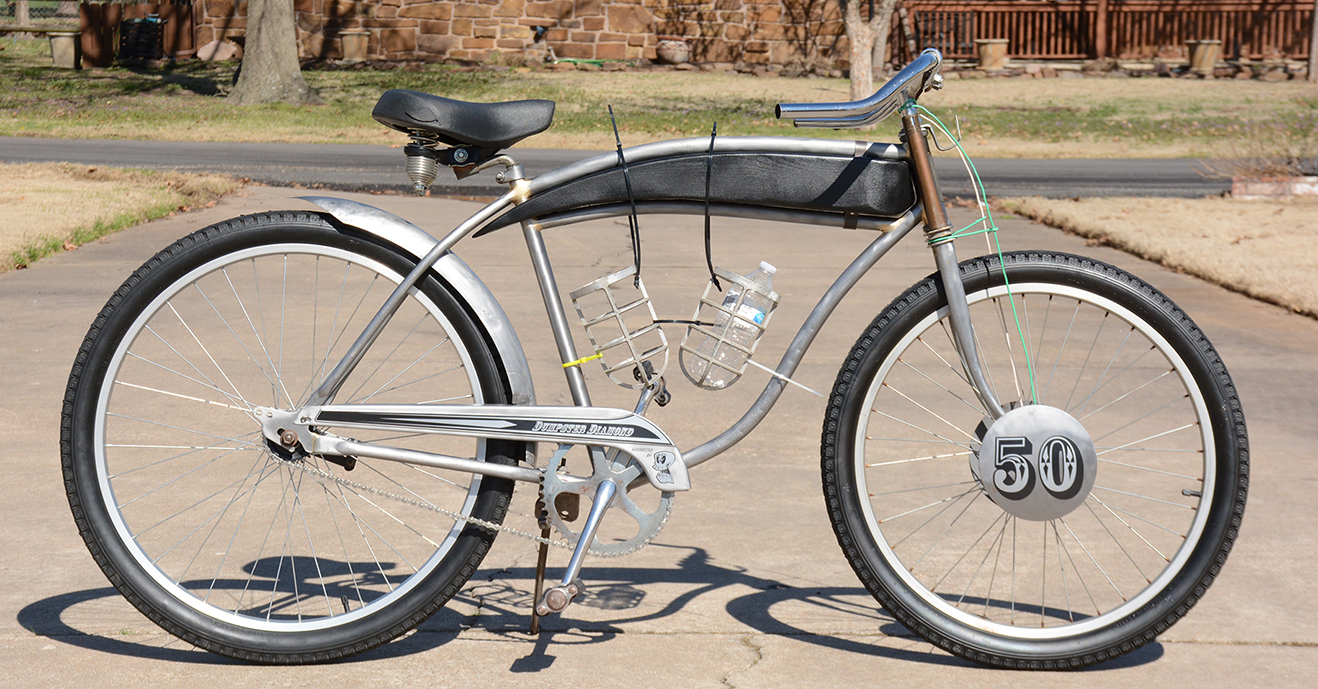 I also want to move the front-facing number plate down a few inches, as it just sat too high up for my liking. I feel that making it level with the head badge looks better. I also want to add some truss rods to mimic those old 1920s board track racer motorcycles. I'm not 100% sure how all of this will go together, but it should be a whole lot easier to figure out than the dummy engine. 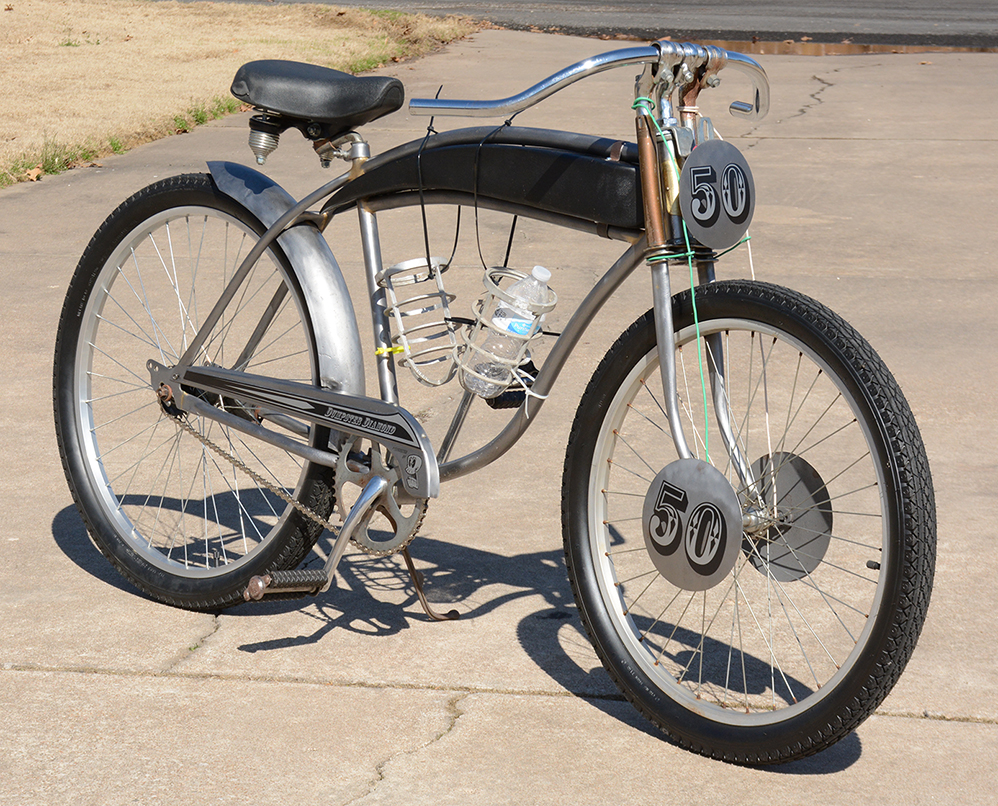 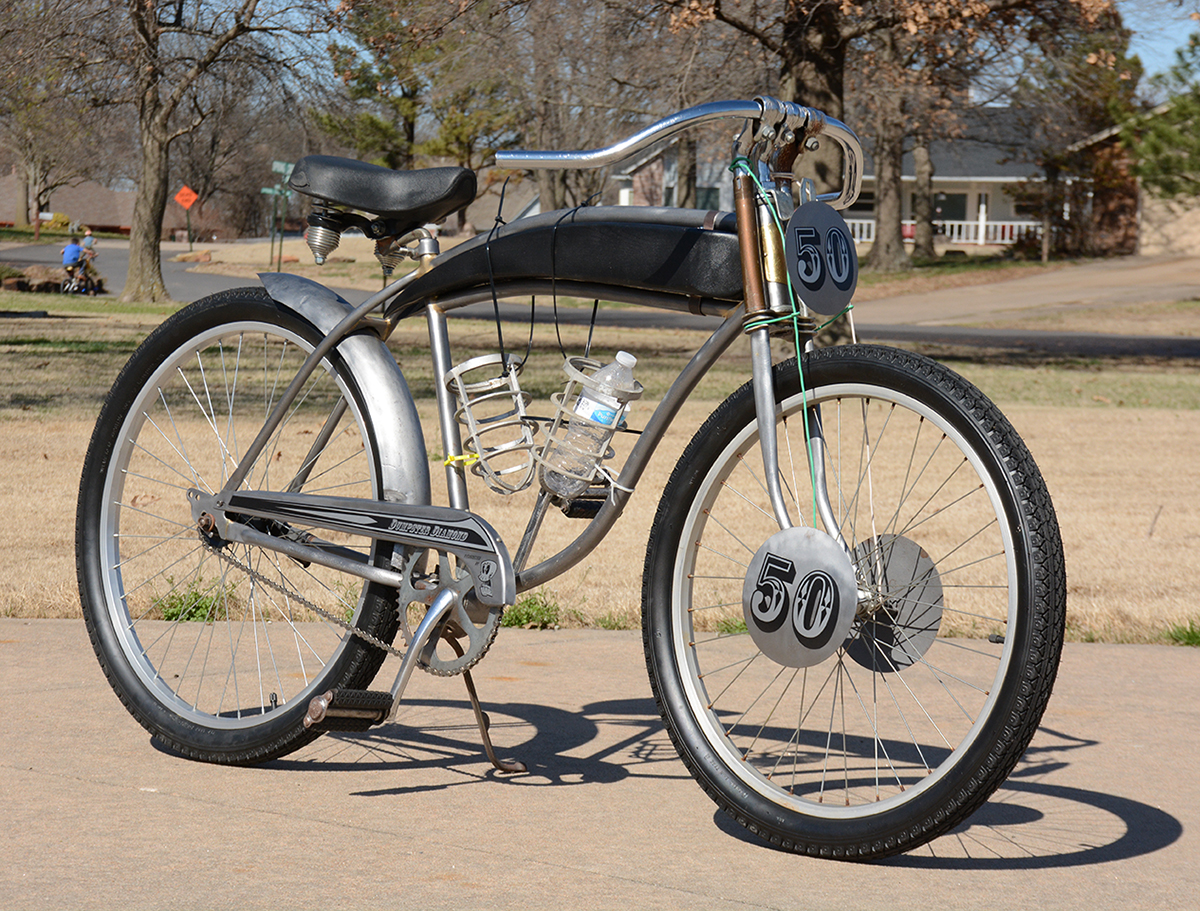 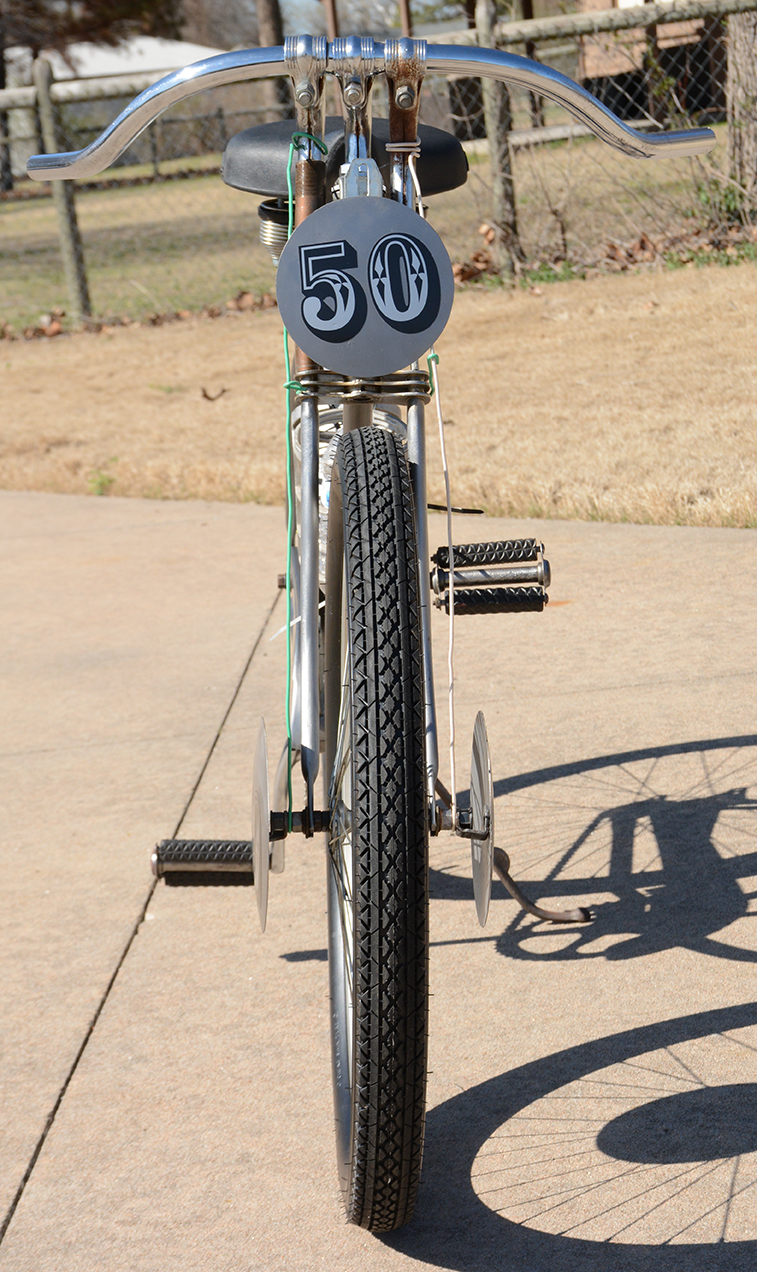 It's so much cooler to see the triple tree fork idea on a mostly-complete bike, versus when I had initially mocked this up on a bare frame. The sight of those 3 handlebar stems together like that just looks so cool to me. I'm going to need to redesign the tank so I can steer though, as the current tank has too much material up front for the forks to rotate properly.

So what's next? Well, I want to trace some of these new photos in Photoshop so I can better flesh out my ideas for the final design of this bike. In addition to the forks and engine/cup holders, I'll be coming up with a new paint scheme similar to my initial concepts, as well as new decals for the tank. I'm probably going to want to find a new set of handlebars, as the ones I have aren't exactly straight; one end dips lower than the other. If I can't save the pair of pedals I had originally planned to use, then I'll be on the hunt for some new ones.

Realistically, I probably won't start any actual modifications to this bike until I finish a few other bike projects first. This one's still technically a rider, while the rest of my project bikes are in pieces. My main goal is to get most if not all of my bike projects finished or at least close to finished by the end of the year. While that means I'll probably work on more than one bike at a time, I do have a few I want to get done by a certain date.

check out my crusty cruiser build. maybe help give it a name?
2 3