You're looking at "11" different bikes melted together to make one ..... Not to mention pieces and parts. From a 13" Hello Kitty number to bacon, "yes I did say bacon, as in pig!" It's all in there.
A lot of the fuel for my inspiration comes from music. Last year I did a Brian Setzer tribute bike called StrayCat, so this year I decided not to stray too far to pay homage to another fav. Johnny R Cash, and I call it "El Dinero" because he was elusive and everything sounds better in spanish!

I don't have much time so I'll let the pics speak for themselves and post the remainder in my thread. Take care BOTEN buds!
Favorite Cash Quote:
"You build on failure. You use it as a stepping stone. Close the door on the past. You don't try to forget the mistakes, but you don't dwell on it. You don't let it have any of your energy, or any of your time, or any of your space. ~ Cash


Oh yeah, she was built for less than 10 buck which would be the cost of the porch swing springs. 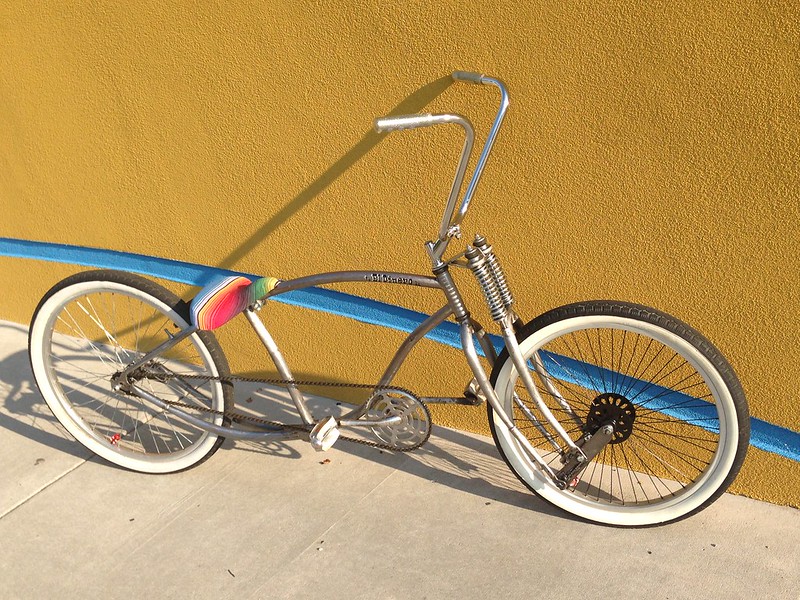 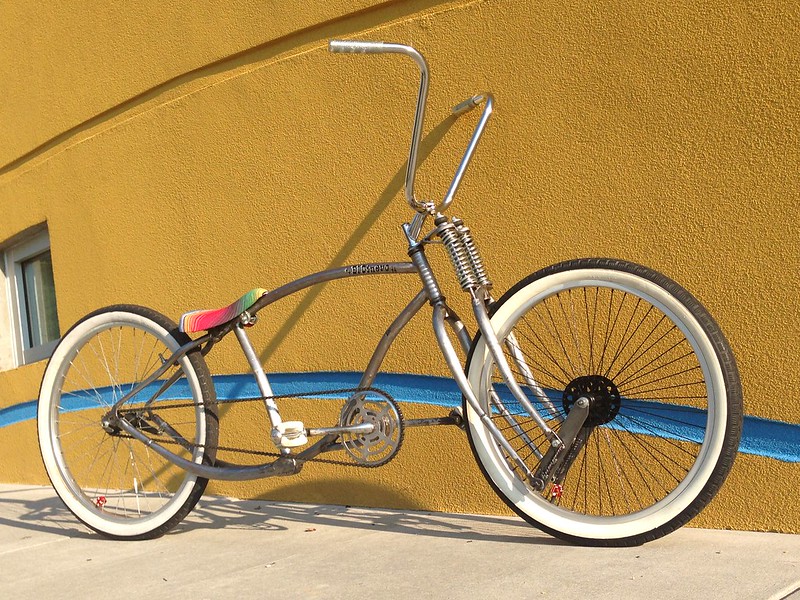 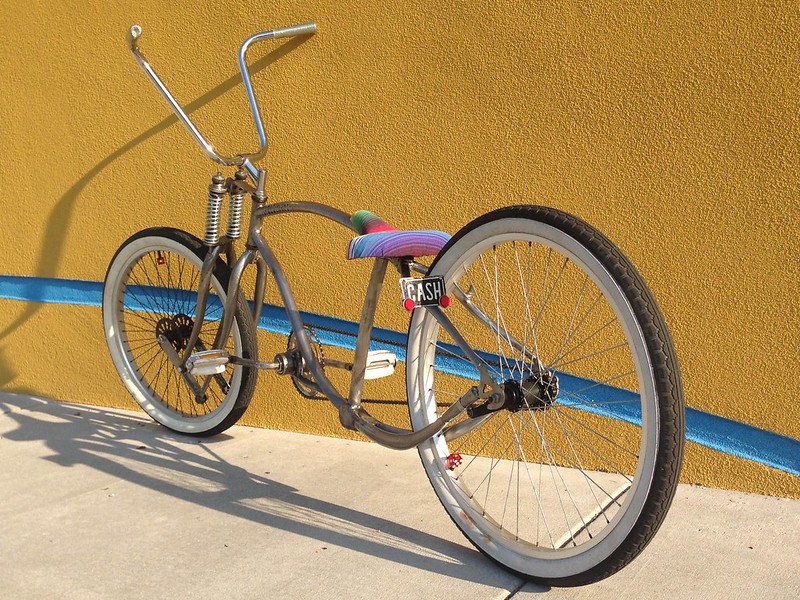 Now that the threads opened back up for editing here are a few other shots from the build thread... 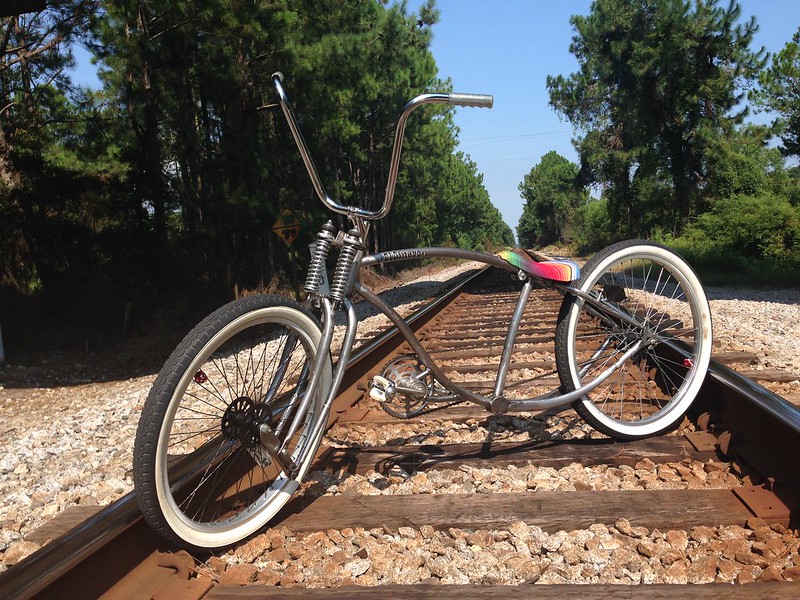 Cash, synonymous with trains, I felt it was fitting to have a few on the tracks. 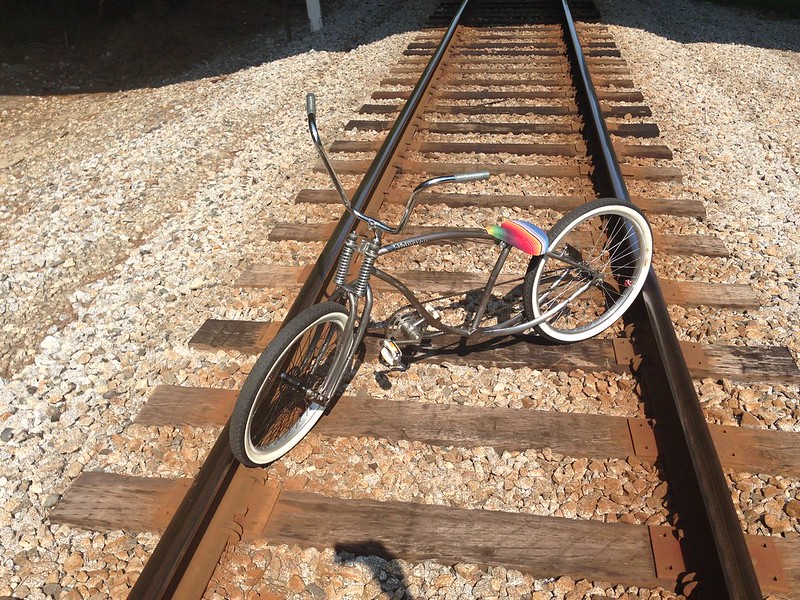 +++Fun Fact+++, I made the vanity tag out of my wife's cookie sheet cause I had the idea at midnight Saturday to do it and wanted some metal with good patina. Whats better than heat tempered sheet metal with years of bacon grease! I bet mines the only build with bacon in it! 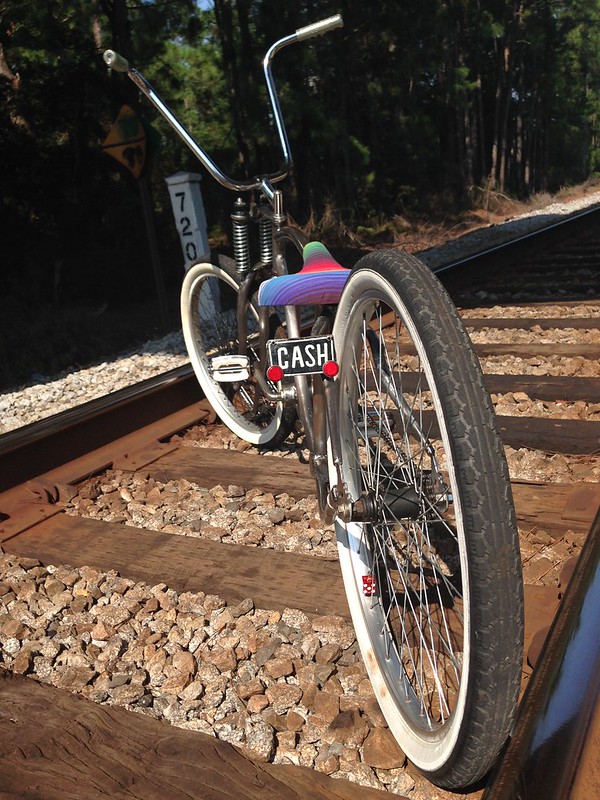 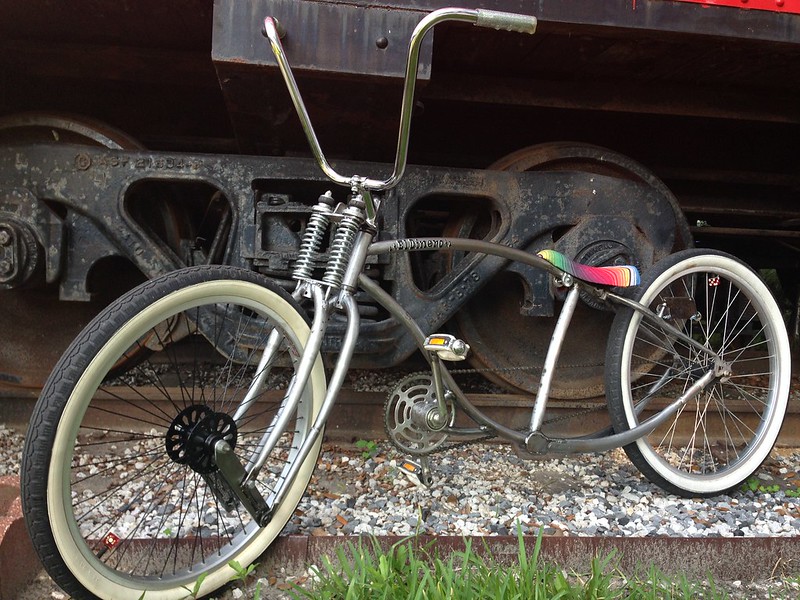 Another from the 3 of the set of pics that made it on.... 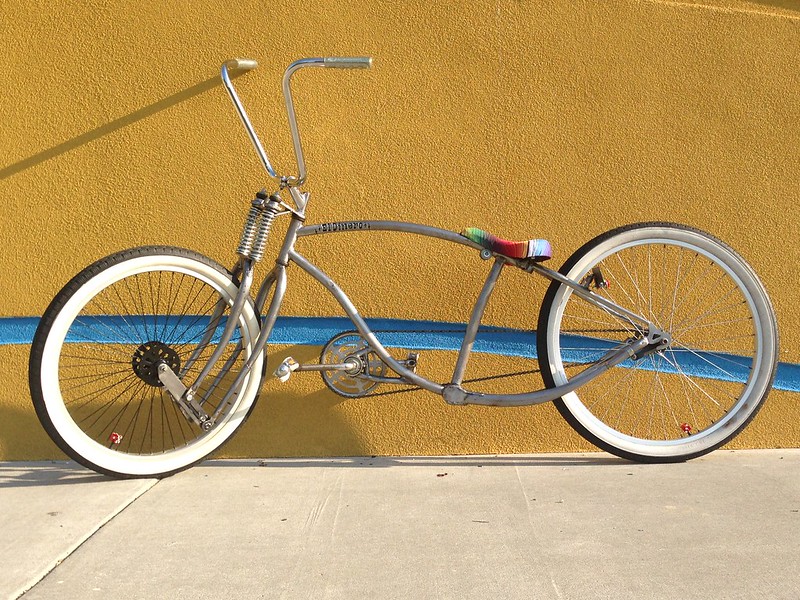 Self gratuitous first ride vid to prove it works

A few build factoids:
Parts List Summary:
I'm sure I'm forgetting some ridiculous material I added in along the way. =)

Here's a few close ups and another track shot I forgot to include: 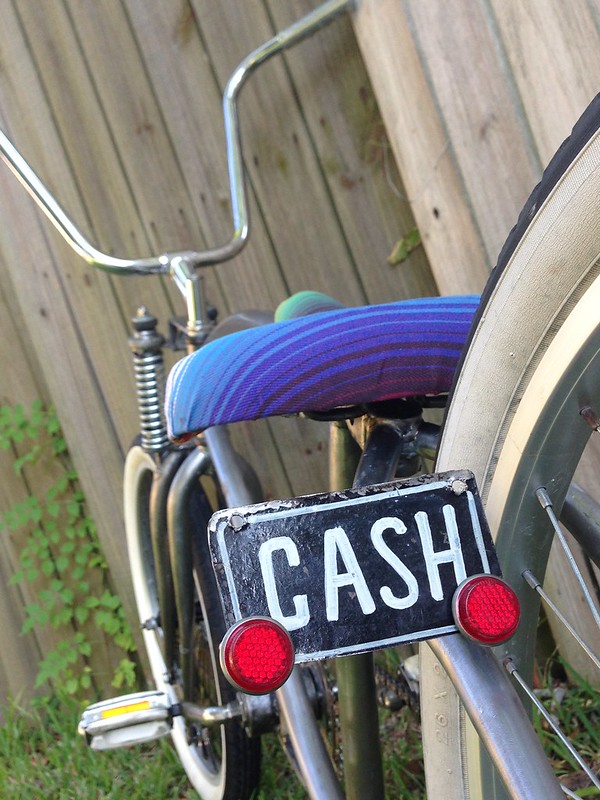 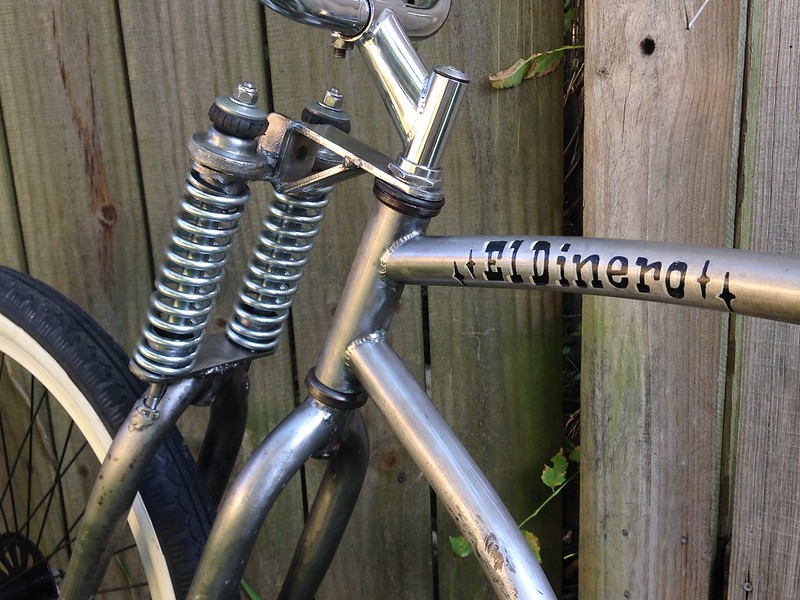 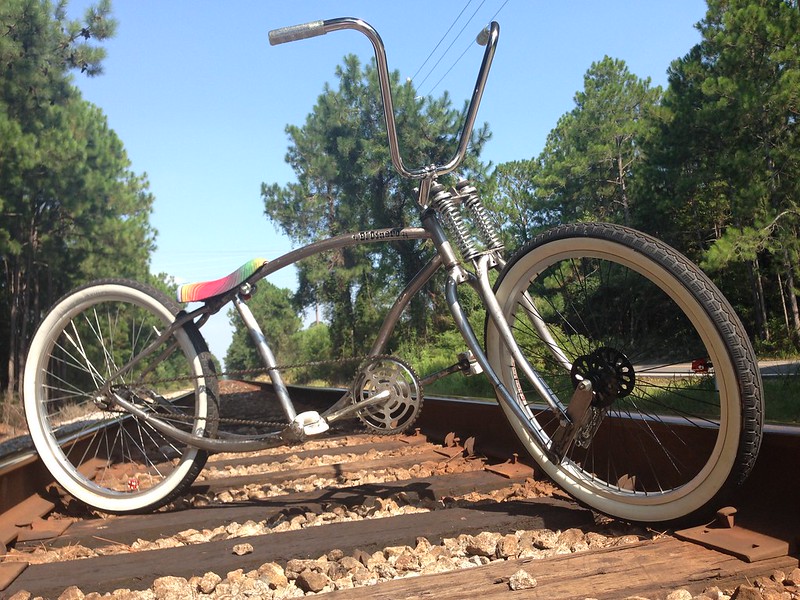 Sweet ride!
I believe you were the last builder who entered in the finished thread.
So that means you are the winner of the Tick Tock prize 'Better late than never'

Funkme said:
Sweet ride!
I believe you were the last builder who entered in the finished thread.
So that means you are the winner of the Tick Tock prize 'Better late than never'

macncheese said:
I was just behind (or in front?) of you across the finish line. Anyway, love the bike. You got one of my votes.
Click to expand...

Thanks Macncheese! Truly honored anyone likes the bike enough to cast a vote for it. I can't believe all you got done in less than a month!!! Love those vintage looking dirt bike tires!

Congrats on a great build , it screams "Cool" !
Reminds me of a bobbed Harley out bar hoppin'.
Mark
link to intro
viewtopic.php?f=9&t=776

Schwinnspastic said:
Congrats on a great build , it screams "Cool" !
Reminds me of a bobbed Harley out bar hoppin'.
Mark
Click to expand...

Right on man, you totally get what i was going for! Nothing cooler to me then the barebones bobbers made with discarded junk parts... Hoping to build just that one day but all I have collected so far is a seat...

Your welcome ! I call 'em like I see 'em

kingfish254 said:
Great work on this build!
I think that is one of the better forks of BOTEN!
CONGRATS!
Click to expand...

Woah, that really makes my day kingfish, thanks so much.

Great fork design. Sucker for the seat, as well.

I went with Guatemalan blankets in the '54 Ford. Mainly because I was there and they were cheap!

Love the bike!!
I'm not a hoarder, I'm a collector of fine junk.

Love the stance. Congrats on an awesome build.
Gerry

Wednesday at 7:28 AM
Wildcat