With the bathroom complete and the shop in respectable order, I finally got a chance to put some pieces together. I usually start with the headset or the bottom bracket. It makes sense to put those chrome cups in first. I usually have to get in there with my dremel and sand down some of the powder that worked its way inside so that the cups will fit. Between the original bike and my donor frame I was able to get nice chrome for both sets of cups. Unfortunately, when I started, I knew I'd only be getting to a certain point because I'm still waiting for the ever so elusive 20 x 1-3/8" tubes. Can't get them anywhere locally, and I had to have a shop order some in. Still waiting on those. No idea what I did with the original tubes, but part of me remembers them being folded over inside the wheels because they were the wrong size.

Front fork was smooth. The original stem was in great shape after I removed the rust and gave it a little polish. The original wide bars were just okay, but not okay enough to make the final cut. They had some serious pitting on the bends so I laid out my best options and picked and appropriate pair. Bottom bracket was also painless, so I moved on to the brakes. Again, the original set was in really rough shape so I needed a replacement. I had forgotten that this bike needed smaller calipers and I hadn't planned anything for this. Luckily I bought a lot of NOS BMX calipers on eBay that had universal sets, fronts and rears. The brand is LKS and the universals were the perfect size, as well as shiny new. Before I put the back set on, I remembered that the rear fender bolt needs to go on before the brakes otherwise it isn't accessible. The rear fender is original. It's not perfect but it makes the grade and I don't have a suitable replacement. The original front fender was toast, but luckily the donor purple ccm cheetah frame had a decent front fender. 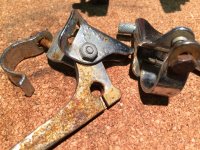 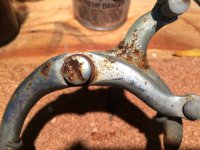 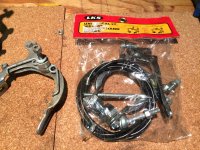 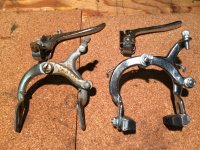 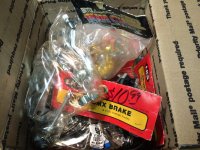 With all that fitted, I decided to open up the NOS Shimano 5 Speed Click Stick that I bought on eBay on new year's eve. It was so new in the package that it still had a clear plastic piece protecting the chrome shifter cover. Nice!! Now, this is the part where I improvised a little and decided to make some changes to the styling of the bike. If you look at an original picture of the Canadian Firebird version of this bike, pay attention to the overload tube on the top tube. It's attached with a shimano "D" style bracket that fits a 1" top tube. I have several of these brackets and was planning to use two instead of the one that the original bikes came with. But... I changed my mind when I opened up the NOS shifter package and found two "B" style brackets. I never really liked the look of the overload tube on this bike because it looked flimsy with only one bracket and the straight tube looked odd clamped next to a curved top tube. It looks like an after thought. Also, the cable between the shifter and the overload tube that came with the shifter I bought was longer than I expected. When I put it on the bike, the overload tube could be extended as far as the seat stays. So, that's where it lives instead. I just had to make sure the brackets cleared the brakes. Voila!! A much cooler looking solution in my opinion. And one more thing. It certainly pays to have extra parts laying around. The shifter in the package came with a 5/8" mounting bracket and I needed 1". I was able to switch brackets with a 3 speed shimano I had in the tool box. I got a lot done, but I'm still tubeless in Trenton.

Well. in the last week, I've been able to piece everything together and I'm here to share it with you now on my first Father's Day. Wow, I didn't realize how seriously everyone is about this day. I got more attention than I do on my birthday. Got to spend some good family time and I got to take my bike out on a photo shoot. One of my favourite parts of the restoration process is finding that perfect backdrop for the finished bike. Too often, I see amazing bikes propped up in front of garage doors and photographed from crappy angles. I like to take the time to get it just right, so you can see all of the best details in one shot!

As OddJob mentioned earlier, I might be well on my way to a show bike with all the NOS parts. I actually pulled out an NOS CCM chain guard for this bike. I'm still a relative newbie to this group, but I remember buying this guard on eBay around 15 years ago when I only had one bike and had no idea what I was doing in terms of restoration. All this time later, and I've figured out few things. I think I paid $12 for the guard back then, and now I'm paying $35 for one without the package, but they're getting harder to come by. I've started to stock pile parts and I have to say it made this restoration run quite smoothly. So many times, I was able to dig through boxes in the basement and find what I needed, instead of having to order something online and wait for days for it to show up.

The sissy bar that was on the bike when I got it was clearly not original, but I had a box of 12 bars that I bought on the CABE that really came in handy as I had a bit of a selection. I ended up trying a few different ones, but I think I found a great fit in the end.

For the most part, the rest of the assembly was pretty smooth. I had a few clearance issues with the chain and guard that took a bit of finessing. The shifter and the radio are also competing for air space, so I had to lift the stem up a little and slide the shifter back. I also leave the bike in second gear, so that the bars won't smash the shifter handle if they swing around.

I re-create my decals in Adobe Illustrator and I have a guy that I send them out to for printing. He does a great job and the chrome ones come out absolutely beautiful!

As I mentioned in an earlier chapter, I moved the position of the overload tube which I'm really happy with. When I run the cables for my brakes, I'm really fussy about the lines. I think it's one of those things that makes or breaks a bike. No point in having an awesome bike with poorly routed cables. It just won't do!!

I was initially planning to put on an old cateye set of directional lights on the back, but then I opted for this bike pals light that I picked up at the Ann Arbor show for $20. It's perfect, because I have the same light on my GTR Sidewinder.

The original seat is still not finished. I was waiting for some vinyl to be shipped, but I c

Beautiful resto on this bike! Turned out amazingly well.

Here are some of my favourite shots of the bike! Enjoy! Love that last shot! Shooting muscle bikes from the rear angle always gives that rear end a big hot rod look, and the front end a raked out look.

I'd say that's your money for sure. And I don't even know how you graphics gurus get those logos and such to transfer to a worn look wall...but it's 'cooler than dangit' to quote my pal @Falstaff .
2019 Builds in RRB Build-Offs:
" Helen Wheels" " Trans-MIG- RaT " " RaTsberry Buffet"

This sure came out nice. Top notch resto. I also like that last pic with "GTR Grabber" written on the wall.

Was fun following along and learning about another rare muscle bike.

I'd say that's your money for sure. And I don't even know how you graphics gurus get those logos and such to transfer to a worn look wall...but it's 'cooler than dangit' to quote my pal @Falstaff .
Click to expand...

I might have to change my final pic decision then eh??

It seems we had the same tings holding us up.....Bathroom reno's. Everything you touched in this thread came out to perfection, bike, bathroom, scooter.

Man that bathroom is nice.
"OLD PEOPLE NEVER MAKE MISTAKES"...We just spend the rest of our lives paying for the ones we've made when we were younger...<(((><

KOTA said:
It seems we had the same tings holding us up.....Bathroom reno's. Everything you touched in this thread came out to perfection, bike, bathroom, scooter.

Hey man, thanks for the compliment! I'll add some pics of the scooter when it's done.

Got the scooter done today! My daughter can enjoy this one when she gets a little older. Nice resto man! Very rare GTR !! I want to find a black one to go with my red GTR Sidewinder but I'm thinking GTR's are almost extinct Let's keep in touch!

Beautiful Bike!! I've managed to score a couple GTR posters since I finished this build. What did it for you? why did you get hooked on bikes and hooked on this web site?

Raleigh and Schwinn Framesets and parts