Inspiration for your MBBO/ORBO Build

For my ORBO build, I'm getting a lot of inspiration from builds I've done in the past. I gave this first bike here to my best friend of 40 years for his birthday a couple years ago. It was one of my favorite off road bikes. So fast. Rode so smooth. Hoping this year's bike will match how well this bike was in my mind. 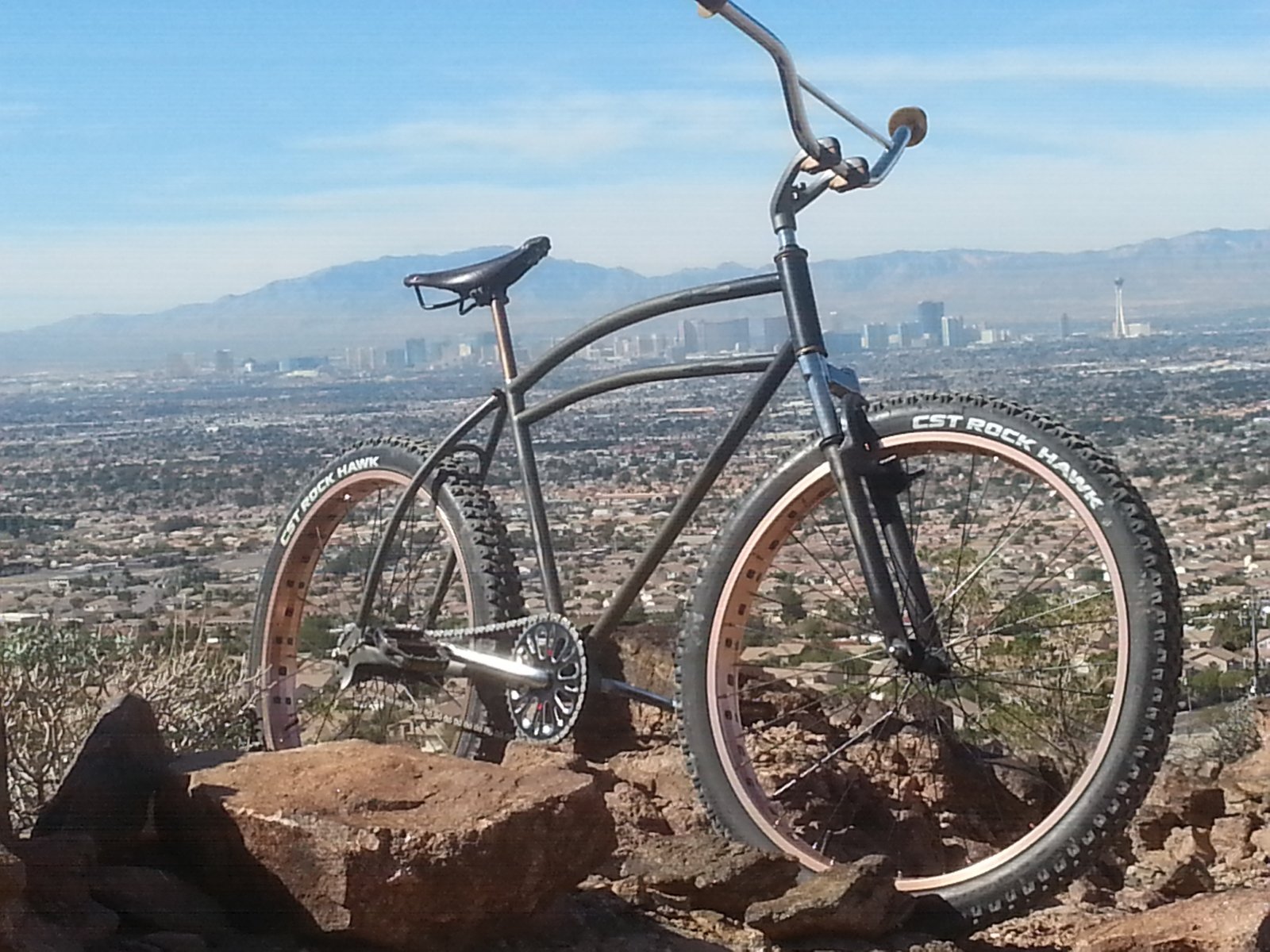 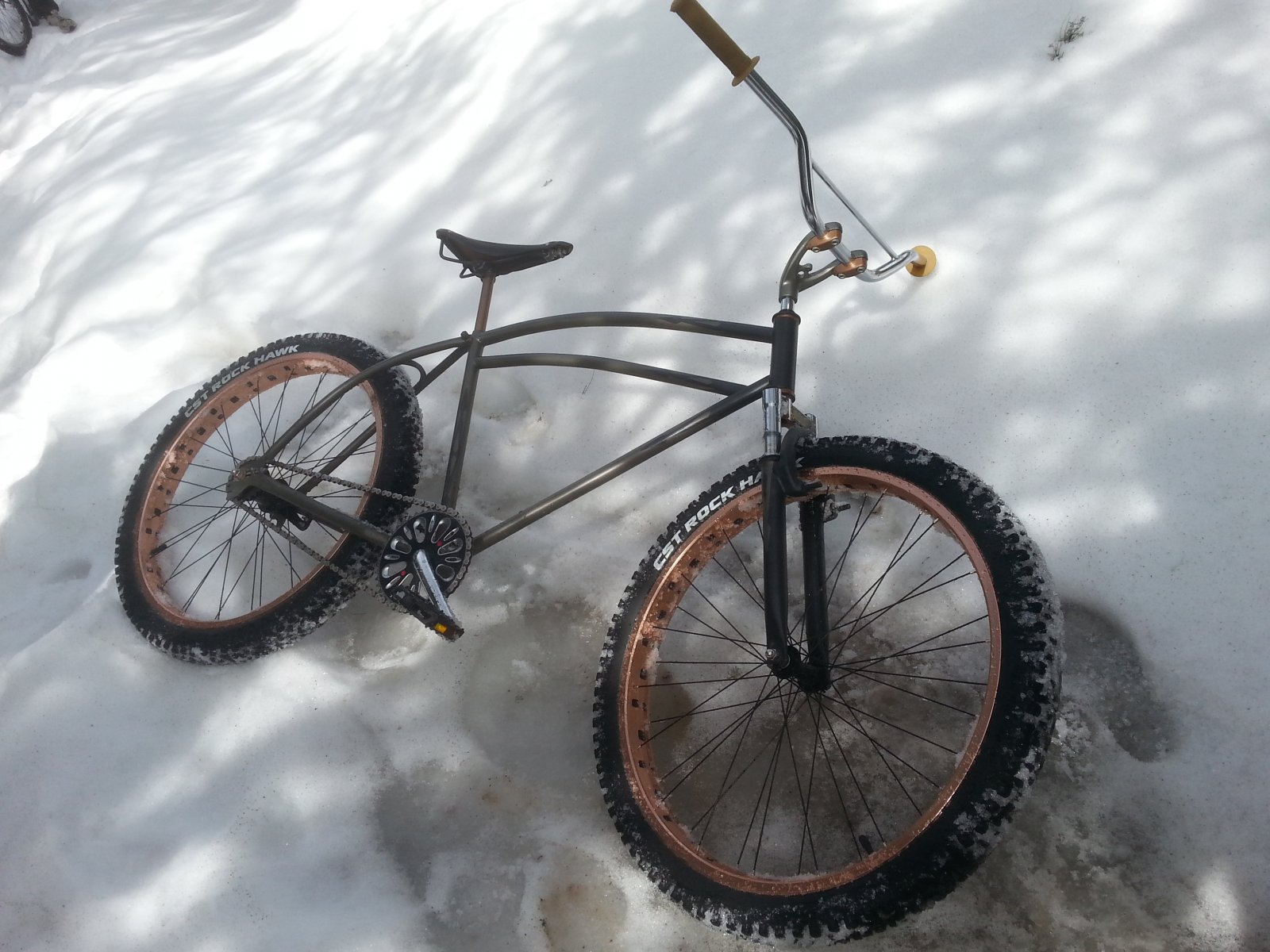 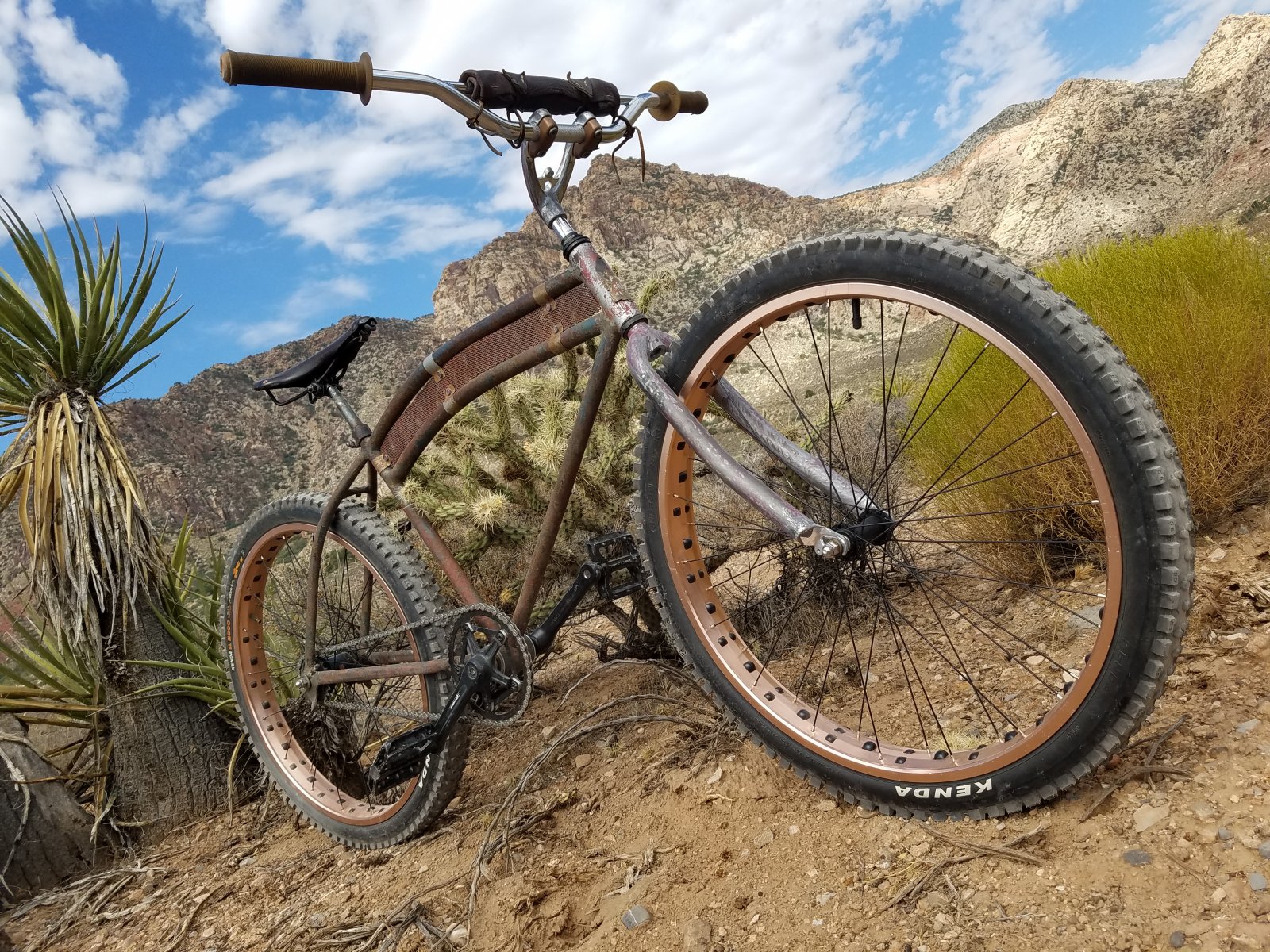 Also, have been looking thru the Klunkers thread in The Show Me Your forum

Okay...I'd like to create a Klunker gallery on our gallery page. If you don't know what a Klunker is....watch this video... http://www.klunkerz.com/trailer-1.html And visit this site... http://www.clunkers.net/ That should make it pretty clear what we're talking about here. :wink:
ratrodbikes.com


What is your Inspiration???

The bike in the third pic above, became a stretch after I broke the bott bracket out of it on the hill in 2017

Woohoo. Been moving slow today, but I have plans for a stretched double bar. Gonna cut up this old western flyer that I broke the frame on last fall. Stretch the bars, expand the dropouts, etc Building..... Riding.....
ratrodbikes.com

I never got a new bike when I was a kid. I wanted one of these SO BADDDDDD! 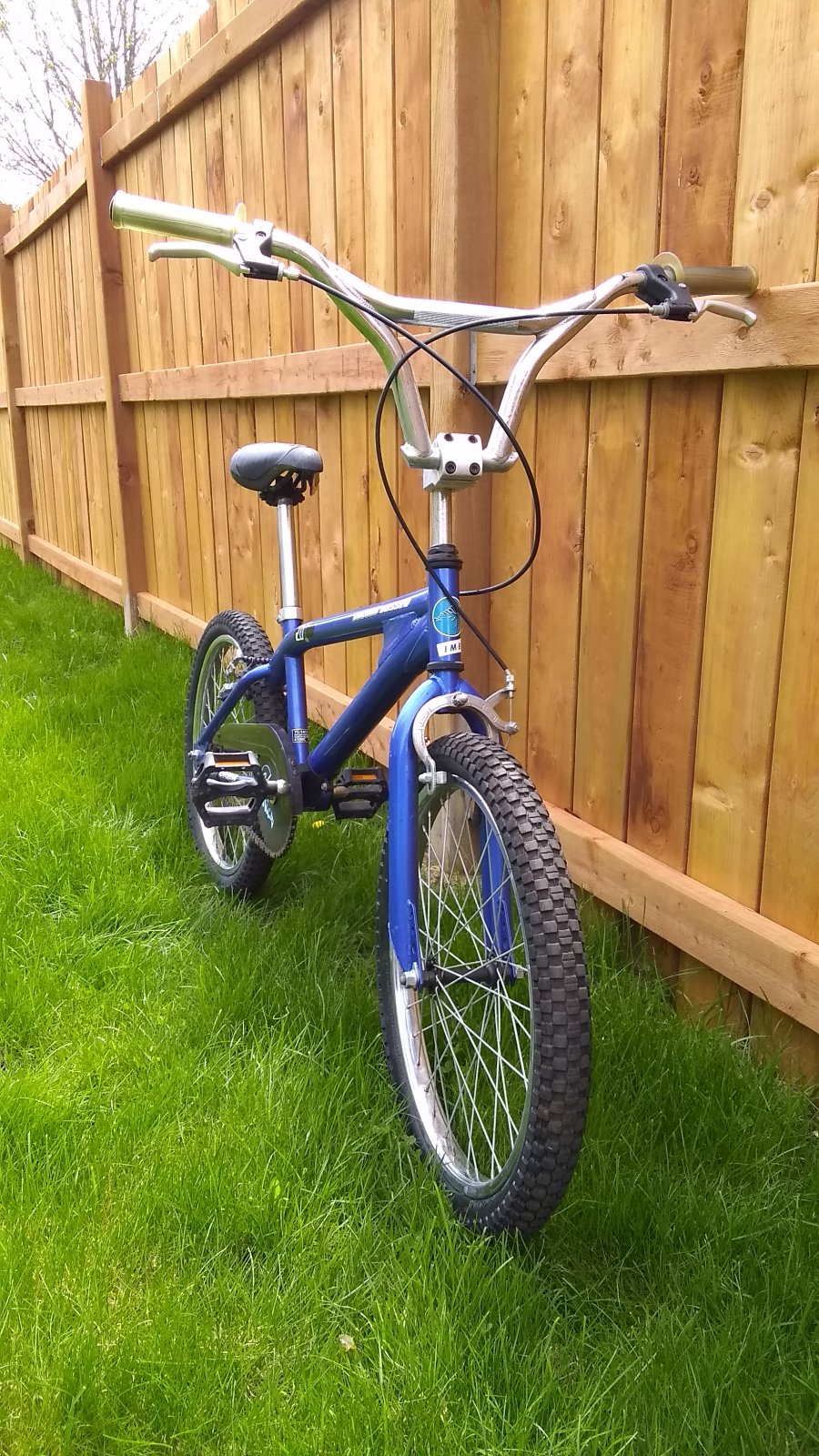 Hardware store junk, but better than the fourth hand ten speed that I got. 30 something years later, I could afford the 65 bucks for this one. Childhood dream, accomplished.
Fun has no cost, only worth.

For my MBBO entry, I'm once again pulling inspiration from the same source that most, if not all pig/muscle bikes were inspired: 1960s and 1970s choppers. I'm looking primarily at 1970s "coffin tank" choppers, where the tanks were usually custom-made, like the rest of the bikes they adorned. Even though I'm not much of a motorcycle guy, I just love the crazy and wild look of these choppers. They were more of an artistic statement than the average motorcycle, with long extended forks, tall sissy bars, high-rise handlebars, stacked rectangular headlights, and wild paint jobs. 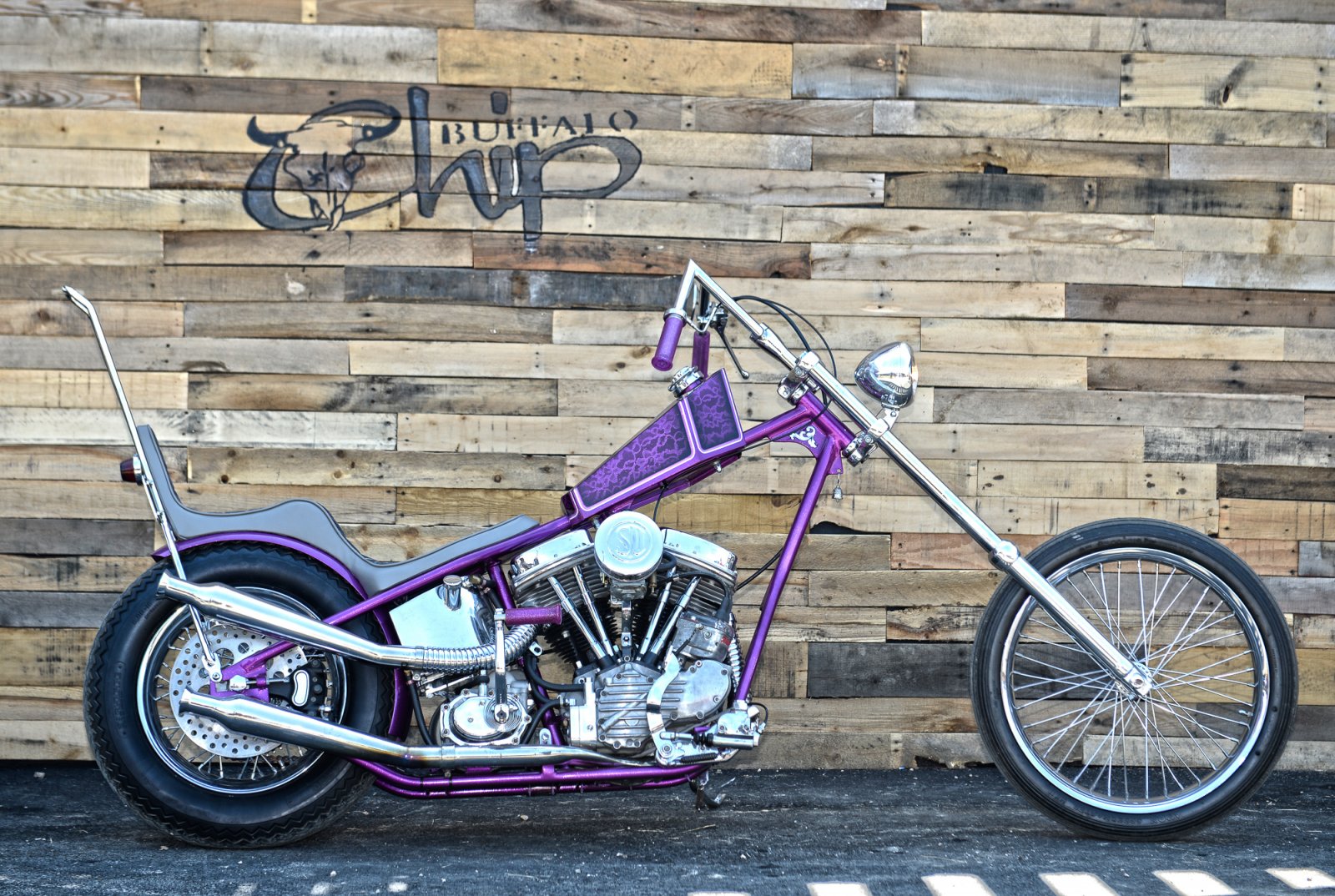 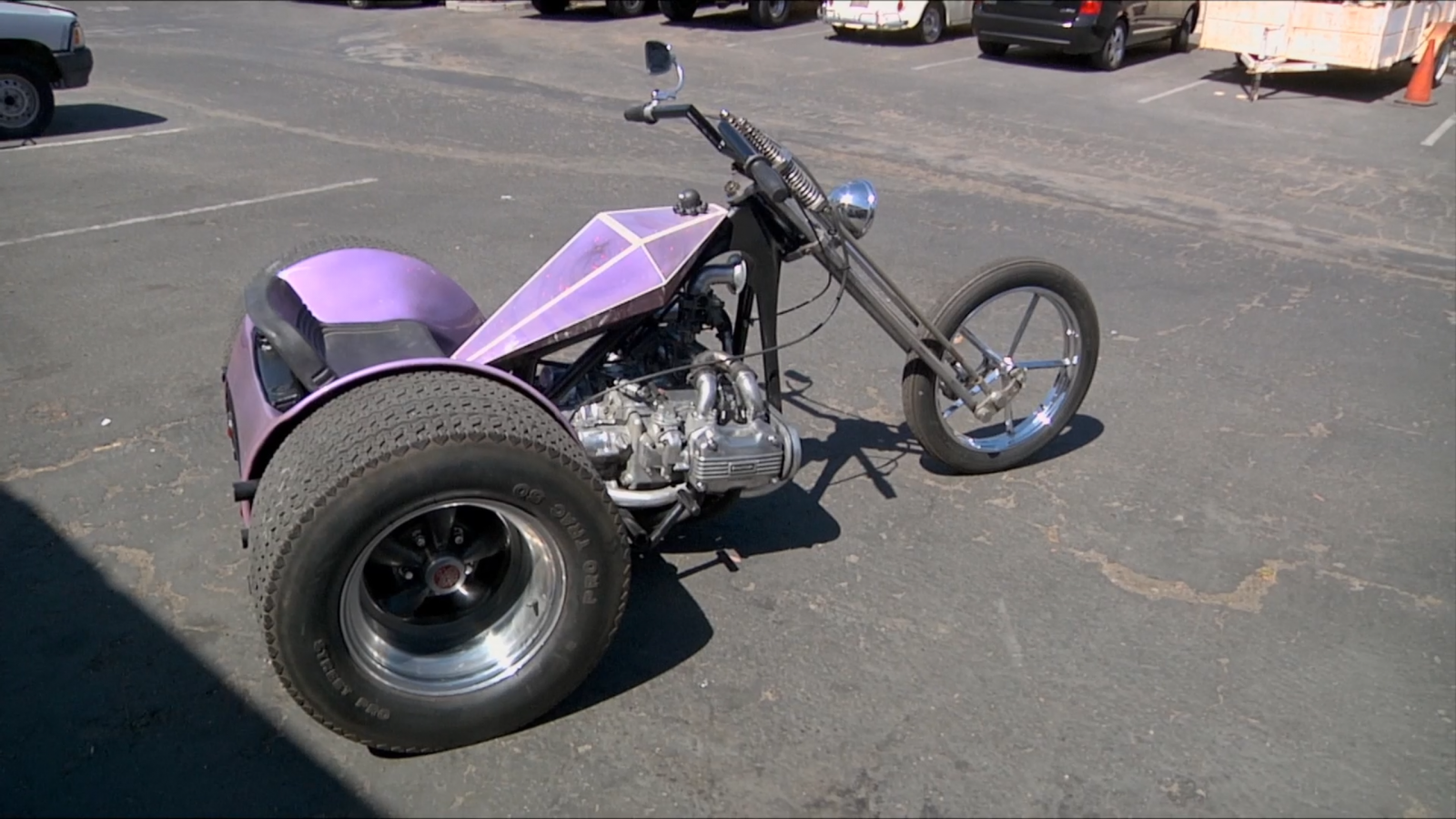 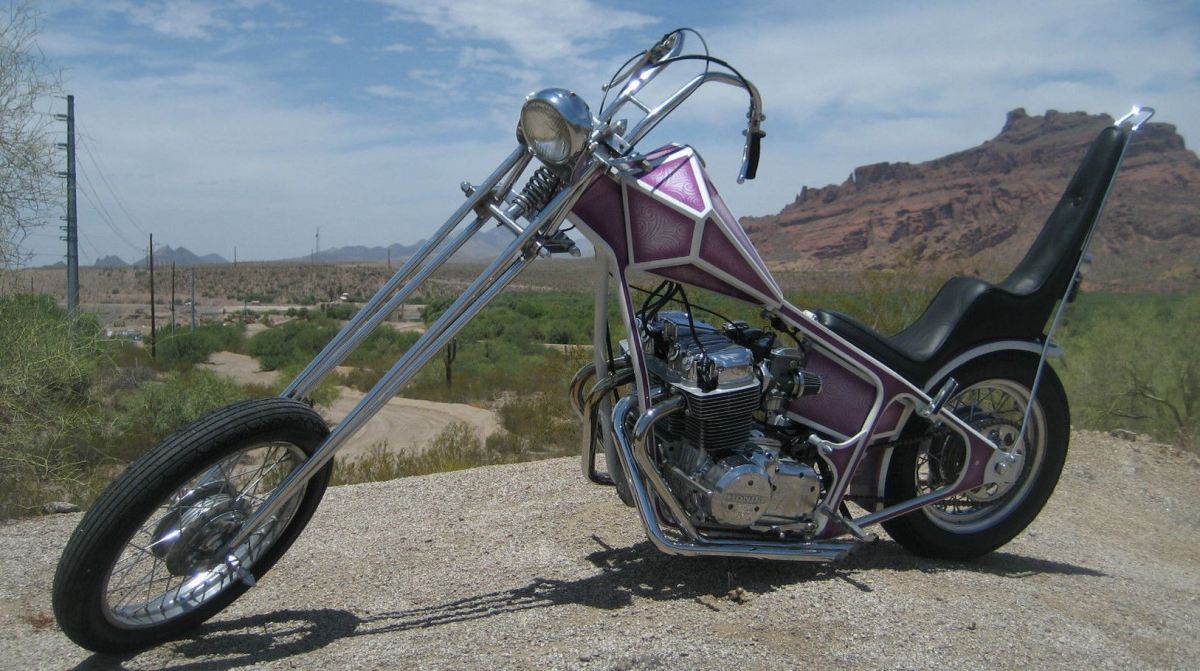 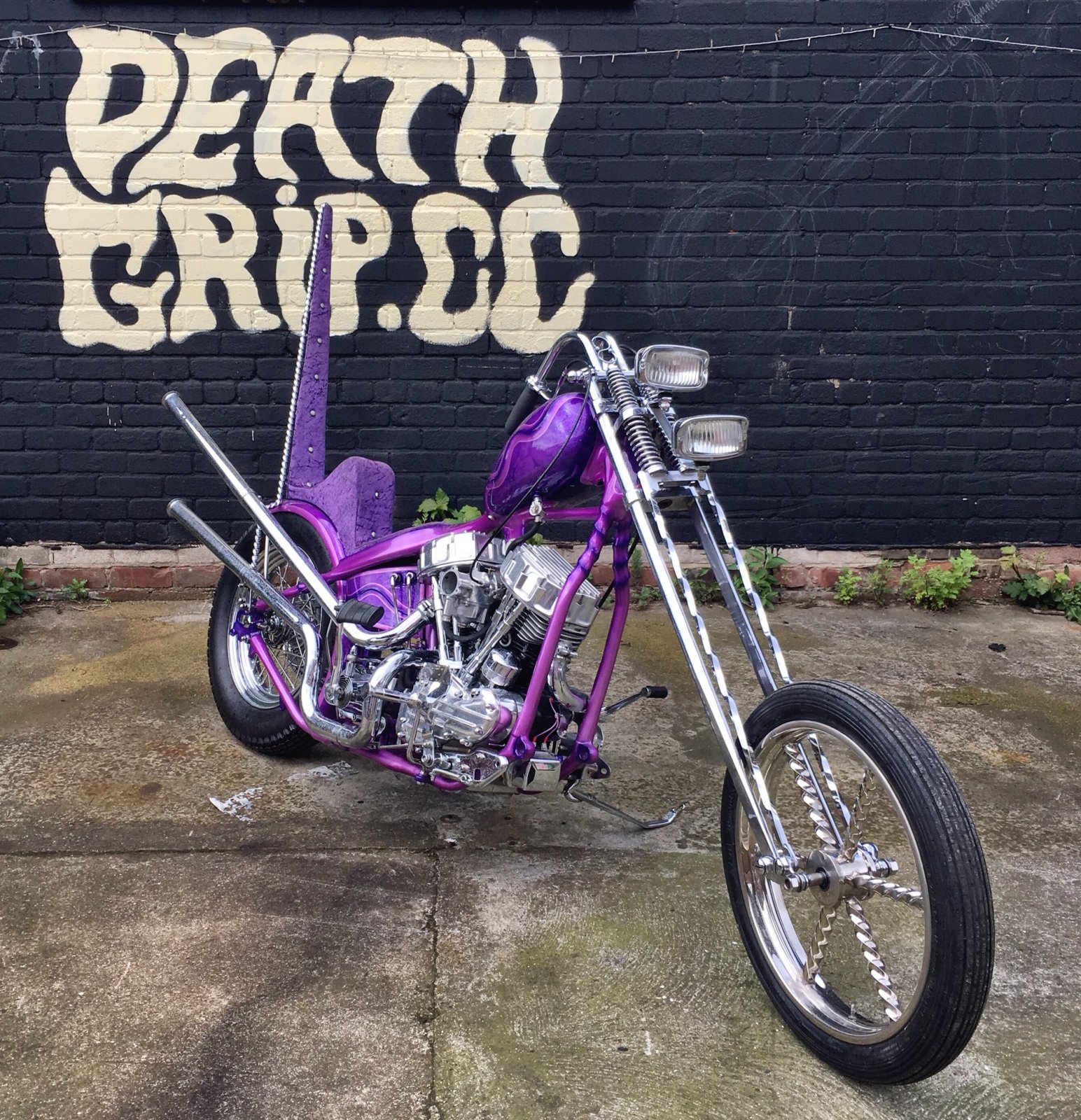 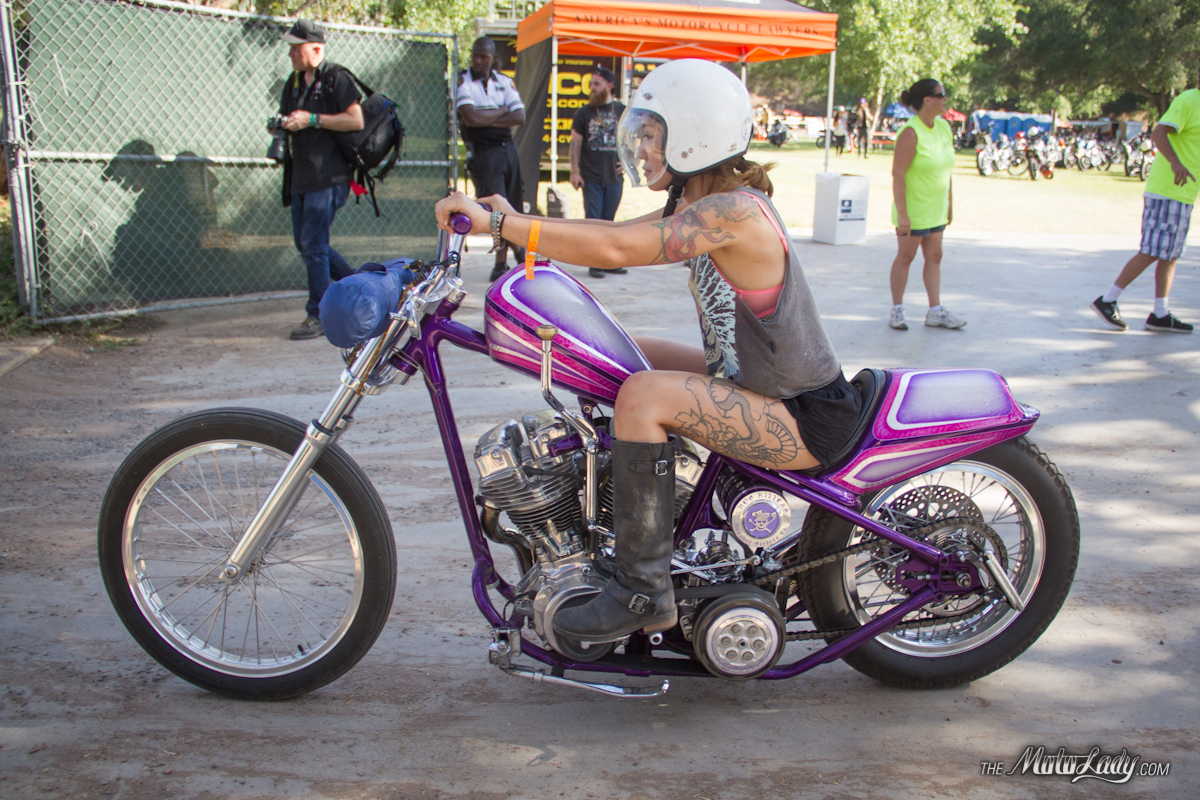 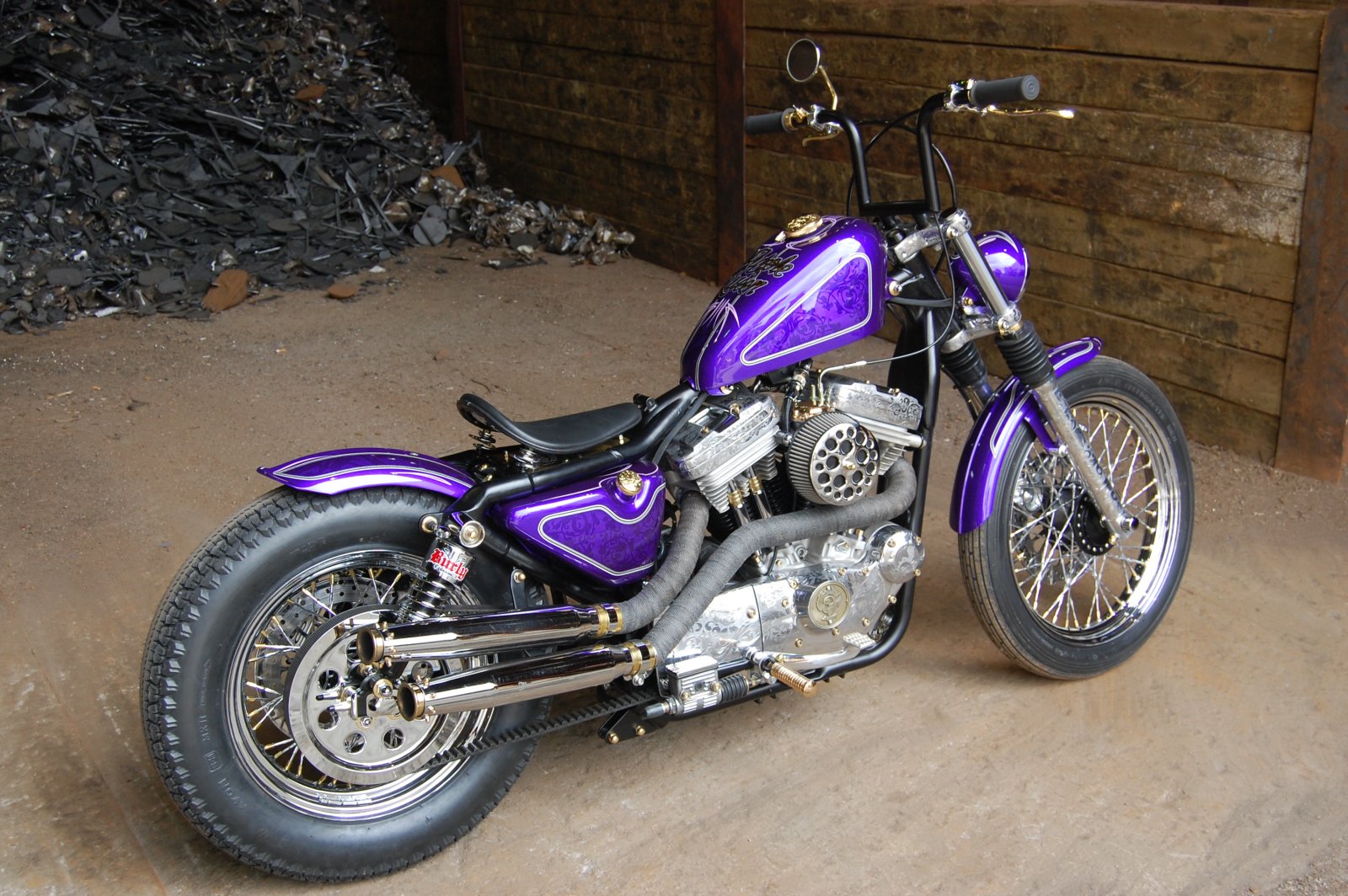 ... and every one is purple, that's crazy!
Fun has no cost, only worth. 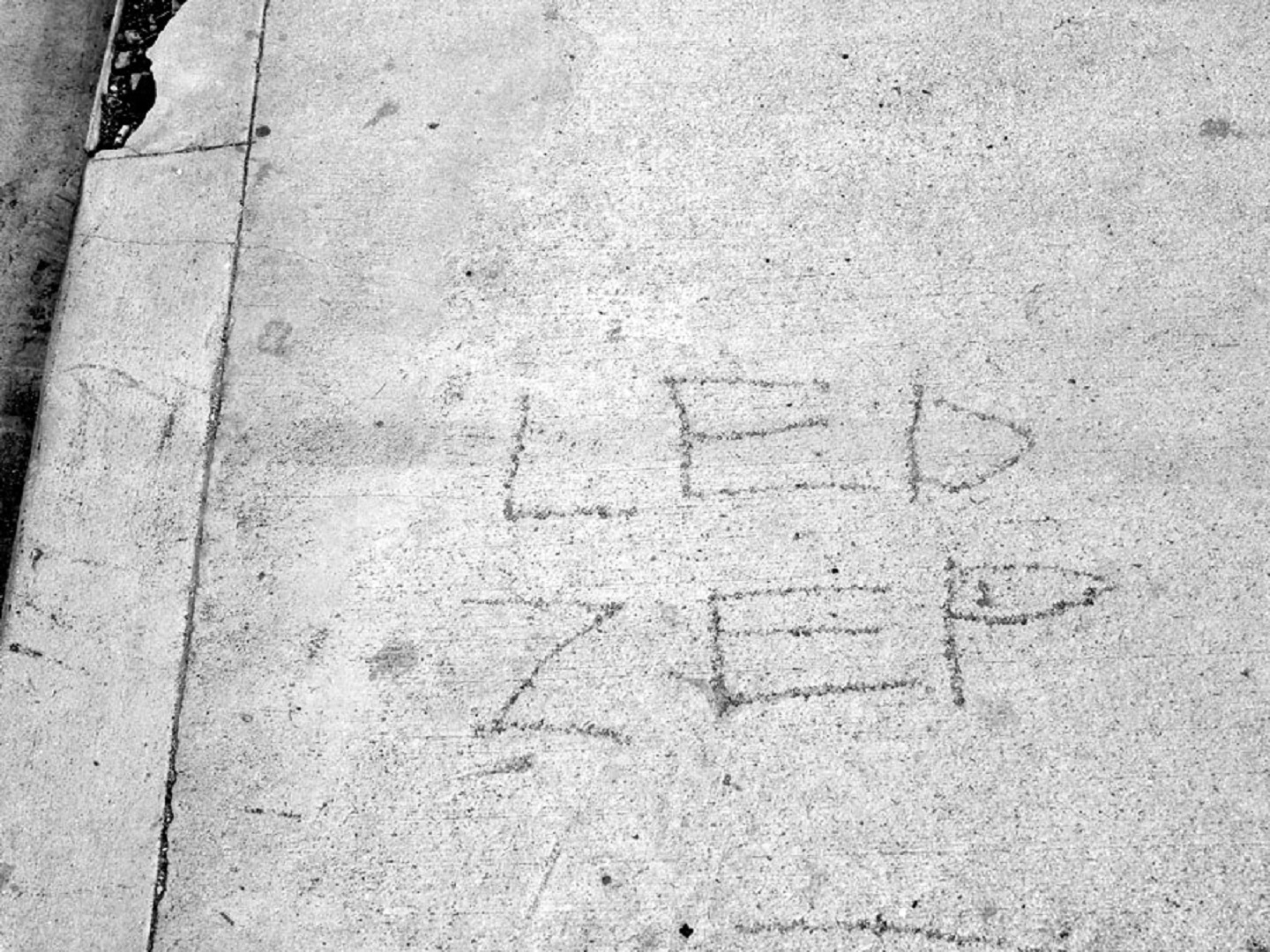 I’m in the same boat as you! Gonna stretch and chop my occ stingray. I want king queen seats with sissy bars in the back and ape hangers and dual springers in the front. I’m thinking 20in rear and 26 front. Maybe go for a moon eyes style. I’m a fan of the smaller Japanese Yamaha choppers.

MattiThundrrr said:
... and every one is purple, that's crazy!
Click to expand...

Hahaha, what more can I say except, "choppers look good in purple!"

bruised said:
I’m in the same boat as you! Gonna stretch and chop my occ stingray. I want king queen seats with sissy bars in the back and ape hangers and dual springers in the front. I’m thinking 20in rear and 26 front. Maybe go for a moon eyes style. I’m a fan of the smaller Japanese Yamaha choppers.
Click to expand...

Sounds like an awesome plan! I've always wanted one of those OCC bikes since I was a kid, but I would need to modify one so I could ride it now. 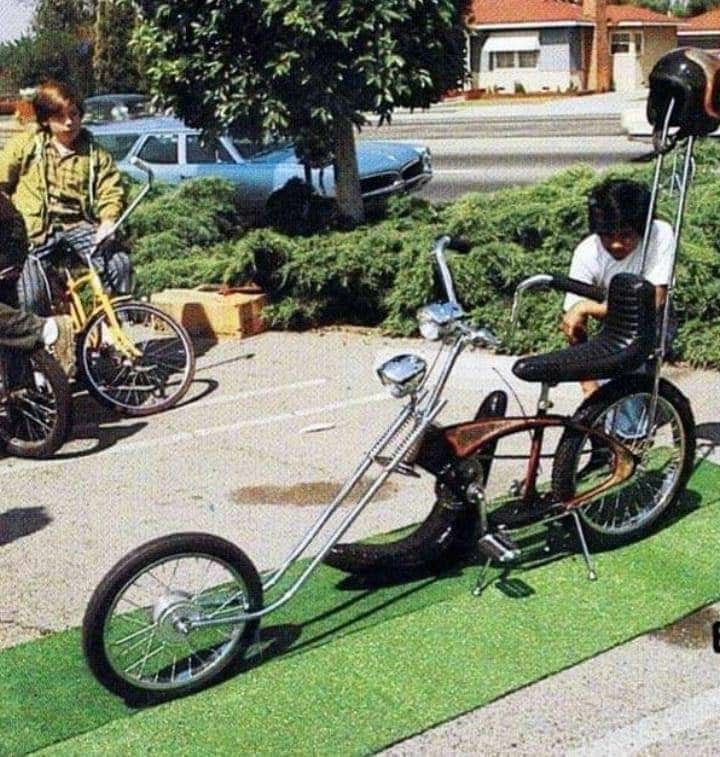 My inspiration always seems to relate somehow to my much modified 1973 Honda Cub 70. I had modified my bicycles and cars before, and ridden some mopeds, but this was the first bike I decided to buy and ride - except it was so dilapidated I had to fix it first, which was part of the reason to buy it - other than the fact I was a student on a budget. I stripped it down to its components, re-assembled the minimum quantity to get it to run and then set out to do some off-road riding to figure out what I needed to change and in what order. 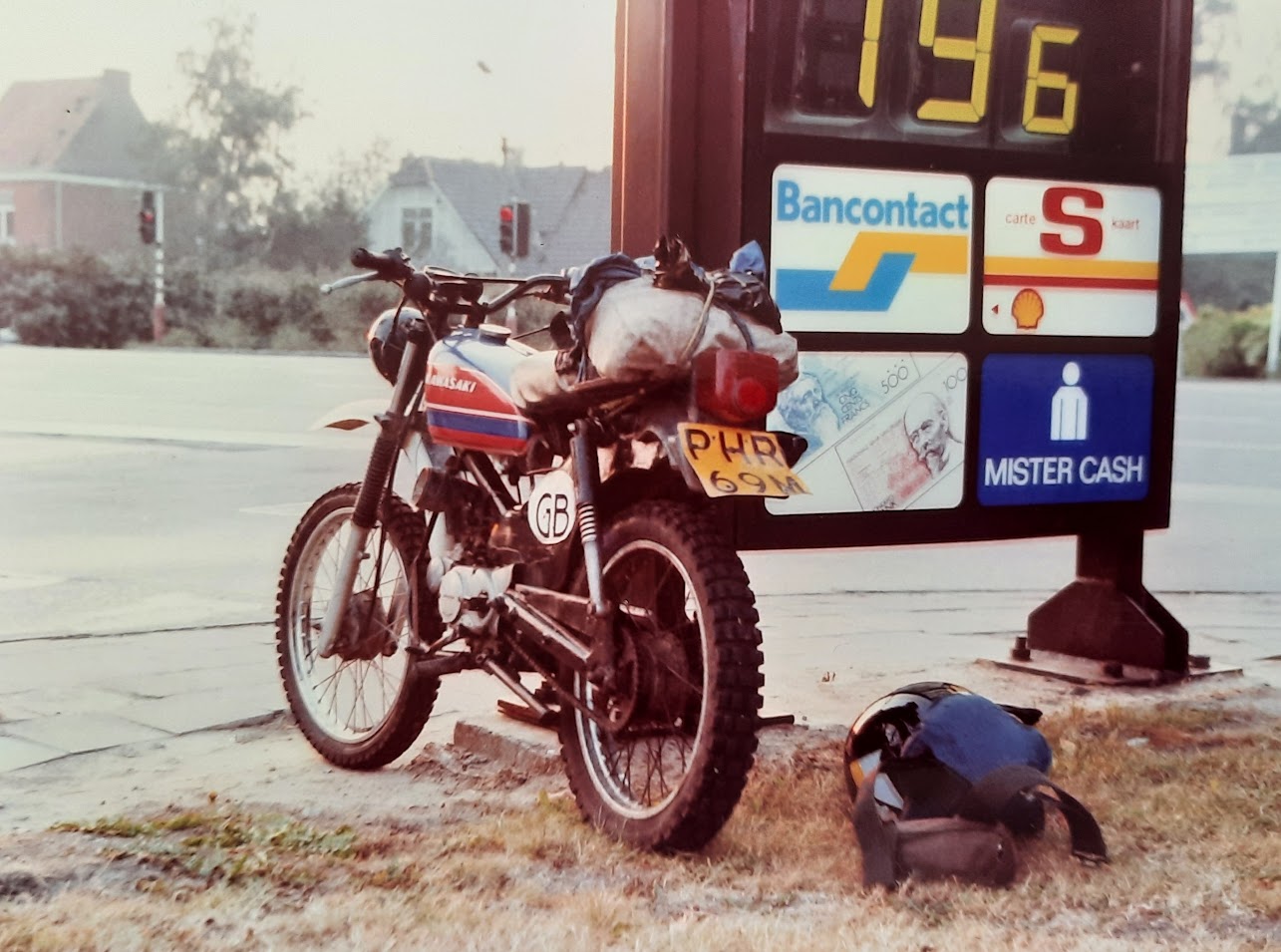 I had it for about a decade before I had to abandon it when I moved to Poland. This is a much later picture than the one on my build thread as at this point I was no longer a student but an engineer with Norton Motorcycles, travelling across the low countries to attend a motorcycle rally in West Germany.

Somewhere in there, in the angle of the forks, is a Spanish 50cc enduro bike I saw a picture of in a book.

Parts are just parts, material is just material, but this is my 1980s rat bike.

The Klunker and the muscle bike, are decidedly my two most favorite bikes of all time. And, my favorite builds out of the BACK40 have been off-road or hot rod related.

I'm not in this year. Had I known that an ORBO was pegged for this 'off season' build off, I would have gathered my parts, and sat nearly peeing my pants for two more months until November 1 to build this ...... 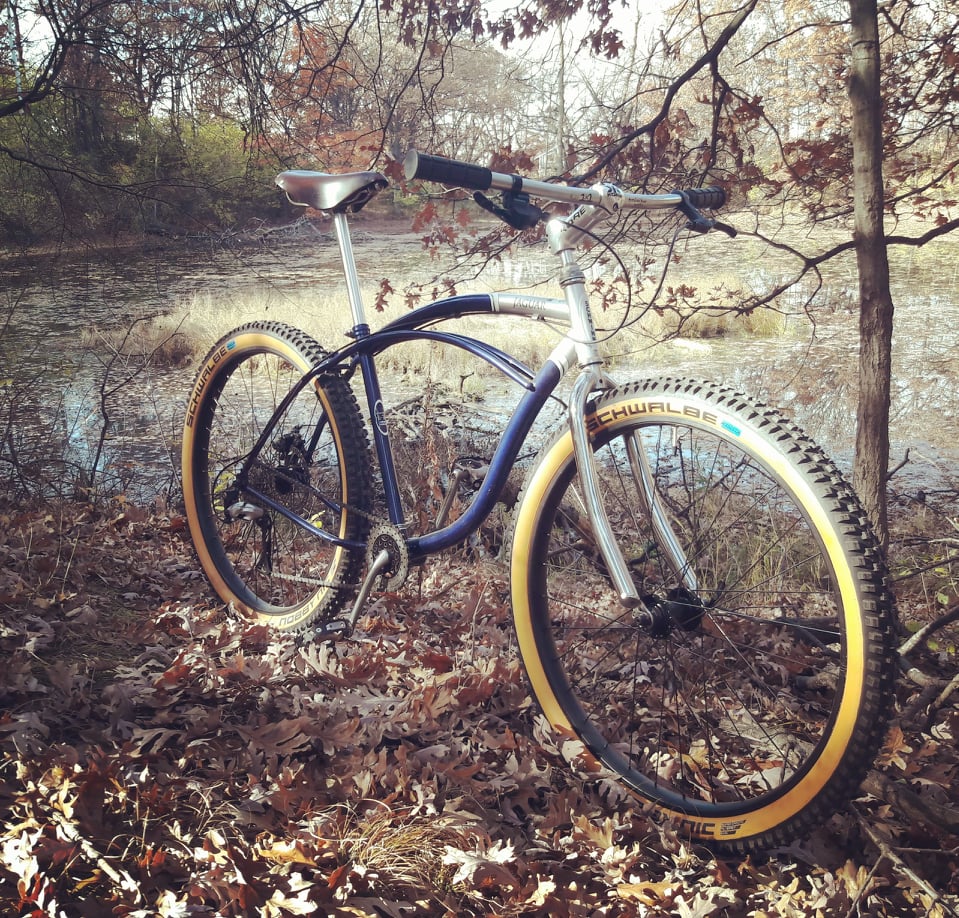 It's a Schwinn Jaguar frame from the turn of this century, with 27.5 35mm wide rims mounted with 2.35 Nobby Nics. And they fit with no frame mods in that 26" cruiser frame! Popped on a Brooks saddle, better seat post, 38t chainring, and an 8 spd drive train with a 12 - 32 cassette and Shimano rapid fire shifter. Disc brake adapter and disc brake kit for rear braking only. Brakes only slow you down, anyway. Here is the full build:

A week or so ago there was a discussion that popped up on a thread as to if 27.5 mtb wheels and tires could fit on a 26" cruiser bike. I had a Schwinn Jaguar steel cruiser that was left at the bike shop I work at seasonally, that was given to me after no one claimed it 2 years later. It didn't...

And a few of my other MBBO and ORBO entries from the past..... can you tell I miss not being involved? 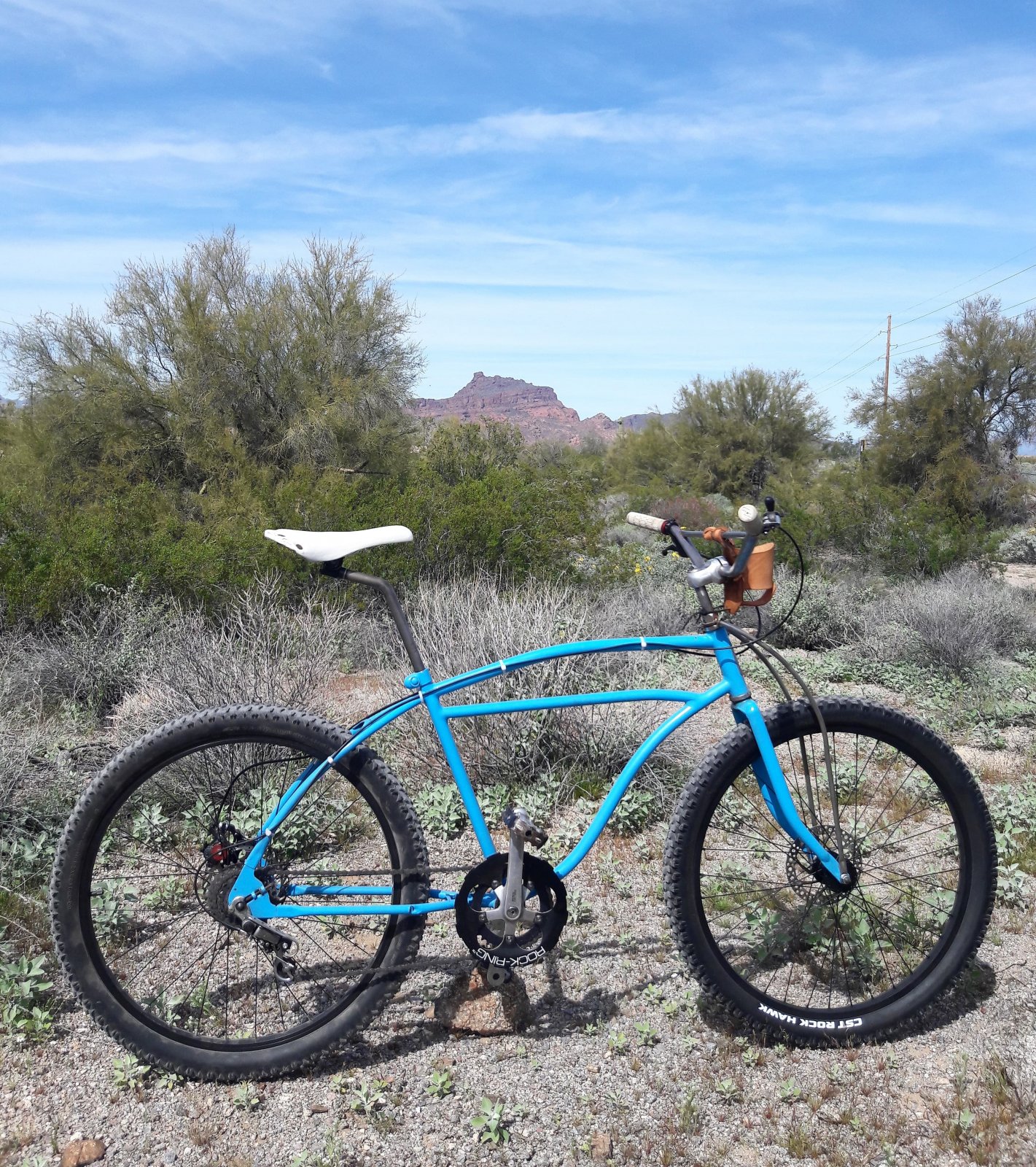 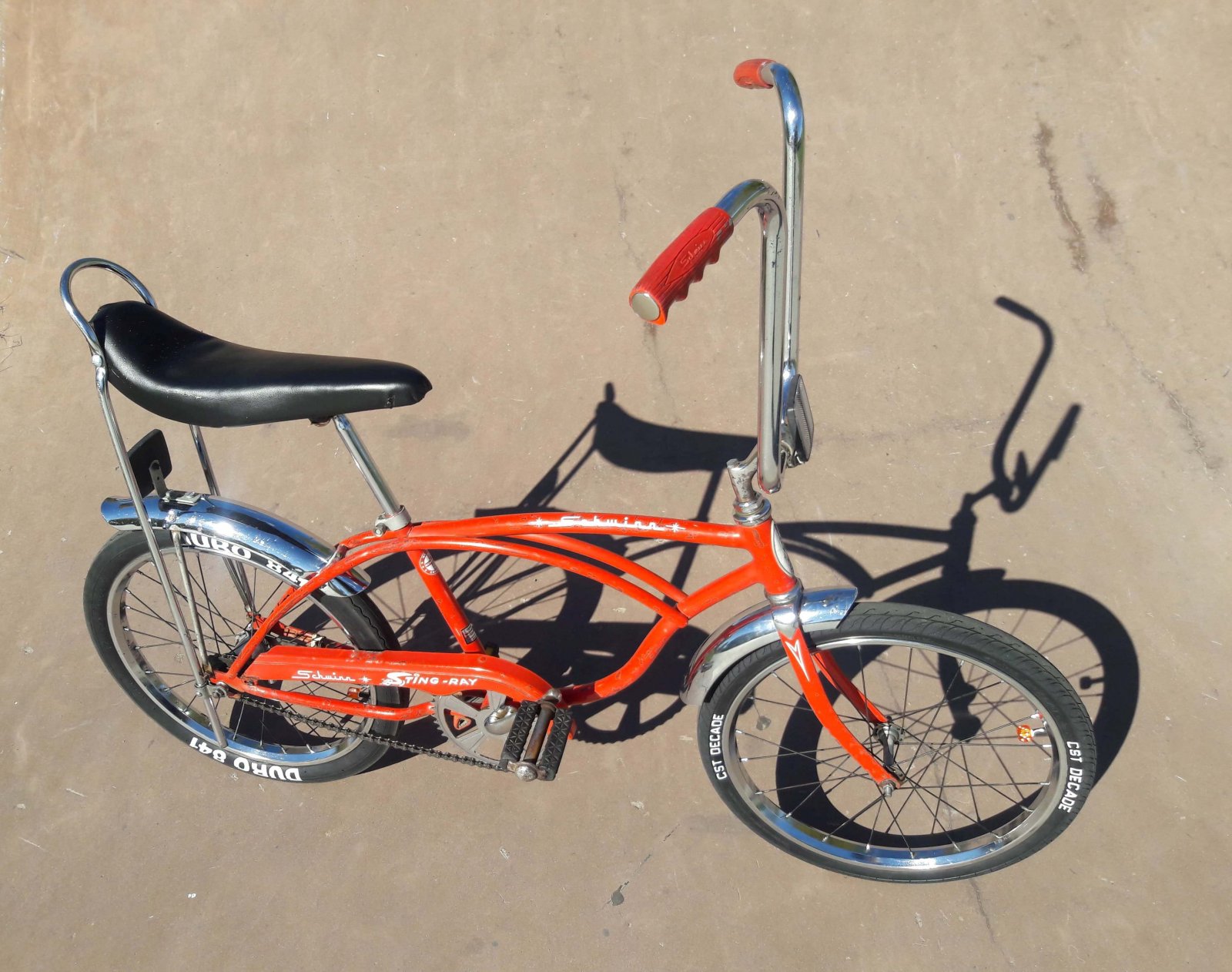 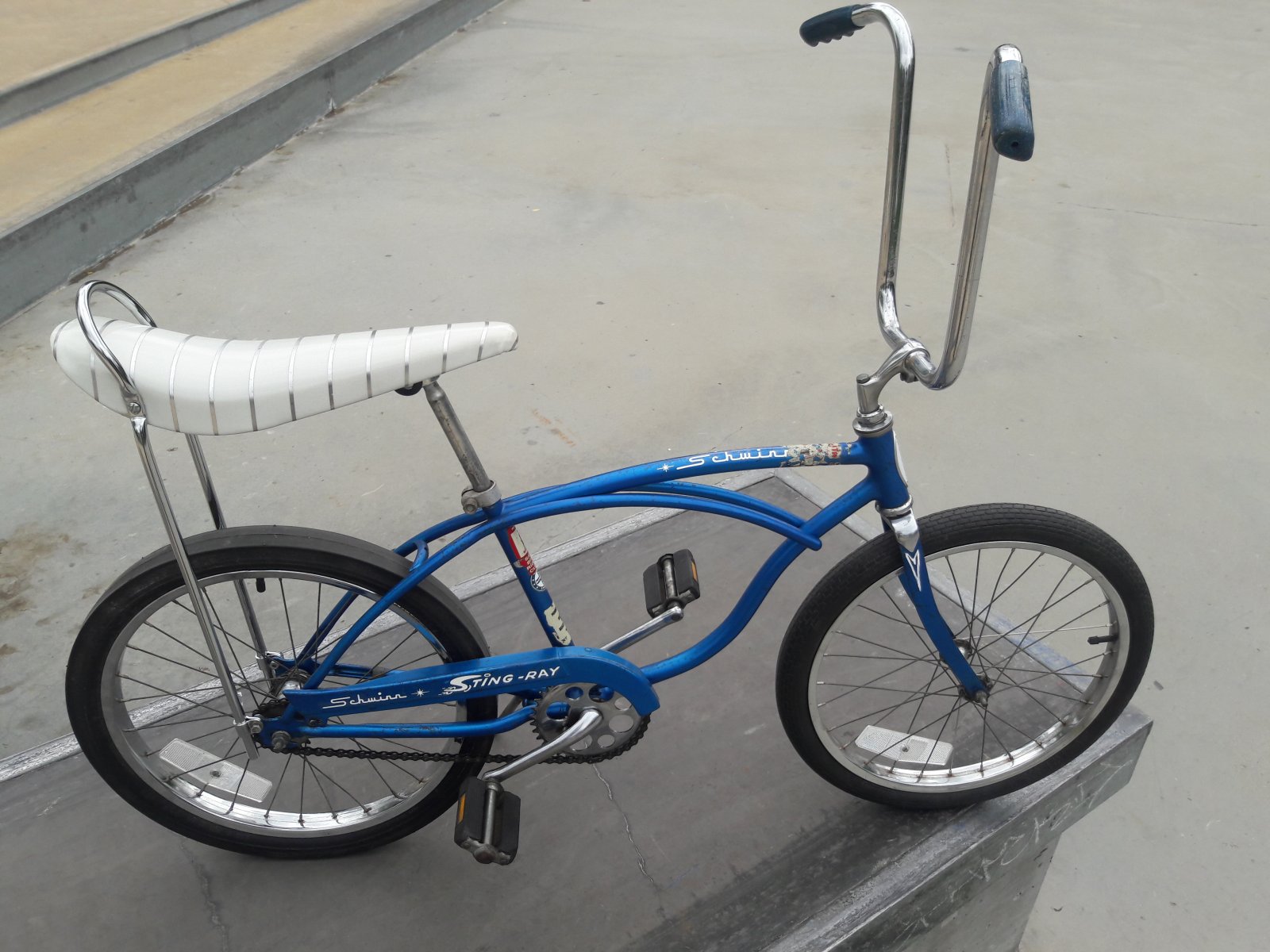 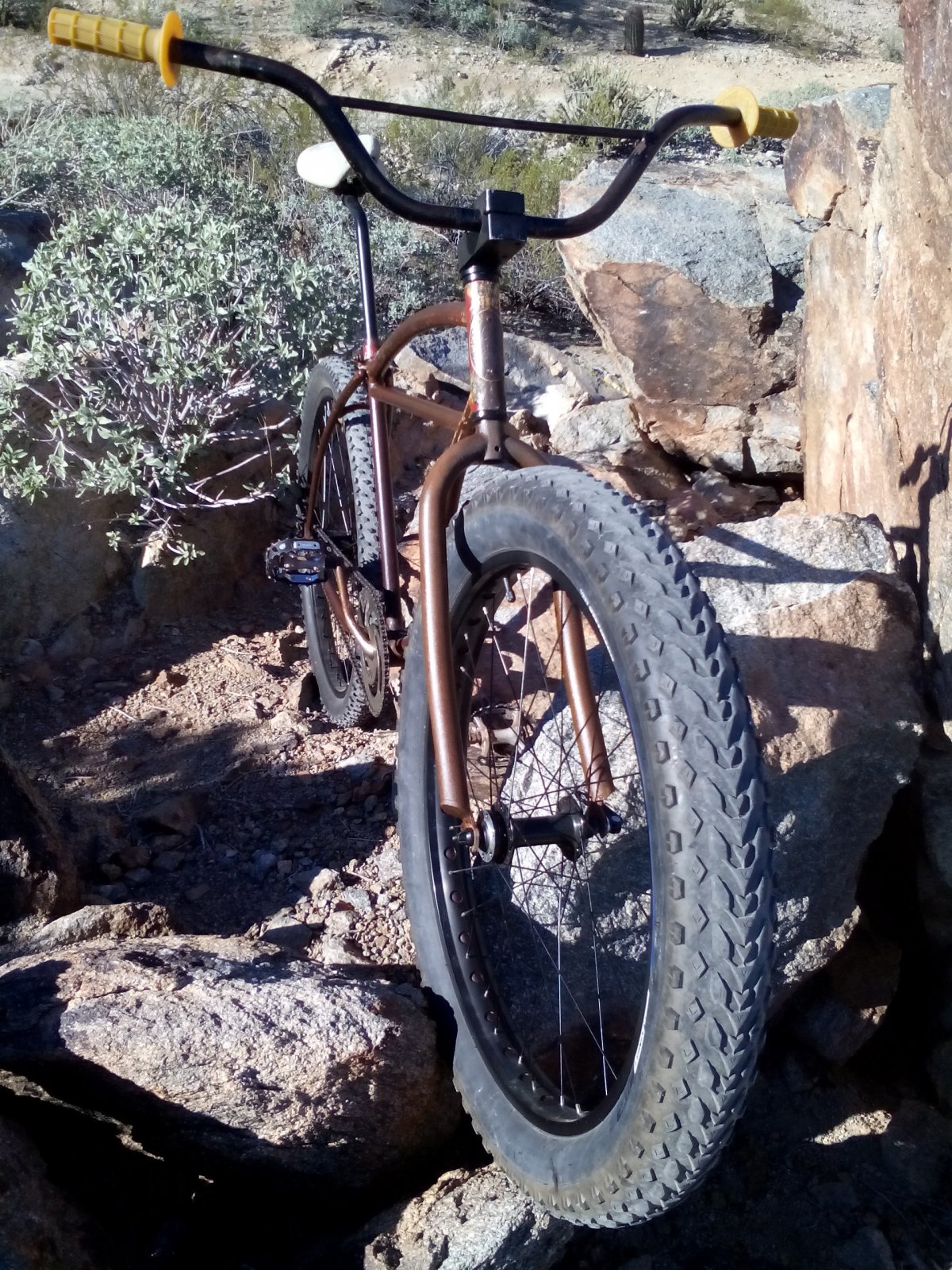 @OddJob Those gumwalls on the Jag look awesome. Lots of cool.stuff there.

I started pulling together parts for the ORBO a week before it began, didn't know it was happening. In reality, i would have been building the off roadster before Christmas anyway. Was lucky to find a themed build off that matched my goal.

I was a little surprised an disappointed that you didn't jump in, @OddJob . Your stuff is always top shelf, and believe it or not, I miss your video updates. Thanks for popping in with inspiration. That brown fattie klunk is very interesting
Fun has no cost, only worth.

MattiThundrrr said:
I was a little surprised an disappointed that you didn't jump in, @OddJob . Your stuff is always top shelf, and believe it or not, I miss your video updates. Thanks for popping in with inspiration. That brown fattie klunk is very interesting
Click to expand...

That sir, is Mesa Buggie; and yes, it's a triple entendre. I built it over the course of two winters in Mesa, AZ. I rode the Sonoran desert mesa s on it. Or I should say 'boogied' over the mesas. And Mesa Boogie is a tube amp I have always dreamed of owning.

Broke the rear triangle in half coming off a jump, yeah I was still doing that five years ago, so the parts got transferred to Desert Sky and the legend lives on.
2019 Builds in RRB Build-Offs:
" Helen Wheels" " Trans-MIG- RaT " " RaTsberry Buffet"

hamppea said:
The single image that hooked me for life. Saw it in book, 70's. Thereafter it was BMX. Was aware of Klunkerz but the only thing we seemed to have in common was weed.
View attachment 176672
Click to expand...

Now this is a chopper bicycle, love it...

Ajames said:
Now this is a chopper bicycle, love it...
Click to expand...

That image is burned into memory over 4 decades, along with the one below. On occasion I combine the two 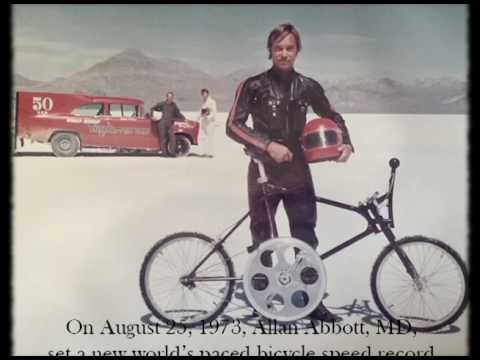 Hmmm, are salt flats off road?

The two in-progress are inspired largely by the paint these frames are rocking.
Red Rocker, Sammy Hagar for the red bike that will rock.
Theodocious Atrocious, Ted Nugent in reference to his penchant for zebra stripes.

The aforementioned Led Zep in this thread will be for a possible muscle bike build I have in mind. I may have time for it, though with the Winter remodeling projects in my house and other things cropping up have held it at bay so far.
The View From My Proverbial Window

Bike from the Dead said:
Sounds like an awesome plan! I've always wanted one of those OCC bikes since I was a kid, but I would need to modify one so I could ride it now.
Click to expand...

Everybody needs to modify one to ride it. The bikes look awesome, but the raked fork steering geometry is similar in safety to being a Kamikaze pilot in a Mitsubishi Zero during WW2.

I have one so far back on the burner that after you turn the knob, the gas would take a month to reach the burner.

It is a motorized project, but not the normal variations. I have an early 1960s opposed twin Lawson Power Products 2 stroke with a crank fired points/battery/Harley coil ignition. I may mount a vintage bicycle generator on the engine for lighting and charging purposes.

To make it safer to ride I am using the hydraulic fork off a Peace Captain America chopper. Looks great with the 24" front wheel and goes downhill like a dream.

It uses a chrome centrifugal clutch (for now at least) and a Rupp mini bike sprocket. No crank sprocket, it uses a vintage Shimano Disc Brake where the sprocket was. I am going to use a 24" MTB rear wheel to do the same up front. The disc's will screw onto the threads where the sprocket goes.

No pedals, they are now highway pegs.
A super size Persons spring seat (for the solo rider only) and the Peace chopper Z Bars are the other 2 points of rider contact.

It is going to be transferred to a Sunset Orange Metallic Schwinn tribal frame with all the decals removed.

I built Mini Fatbob tanks for it with a 160 mph VDO speedometer so I do not break a speedometer drive by going too fast.

It is only a mock up right now so I will be redoing almost everything I have done so far.

It is in storage right now and no photos. I may get it out soon though and if I do I will put up a build thread on it even though it may not get built right away. I have 2 or three musclebikes ahead of it.