EDIT 7th Feb 2019:
Flickr is starting to limit accounts with more than 1,000 photos, as I exclusively used Flickr before we could direct upload to the forum there are well over 2,000 photos in my account, most of which are linked on this forum.

I have now downloaded all of my photos from Flickr and am planning to slowly go through and replace the important photos in all my old build threads, but it will take a while.

If there is a particular thread or pic you are after, let me know and I will work on getting it back up for you as soon as I can. 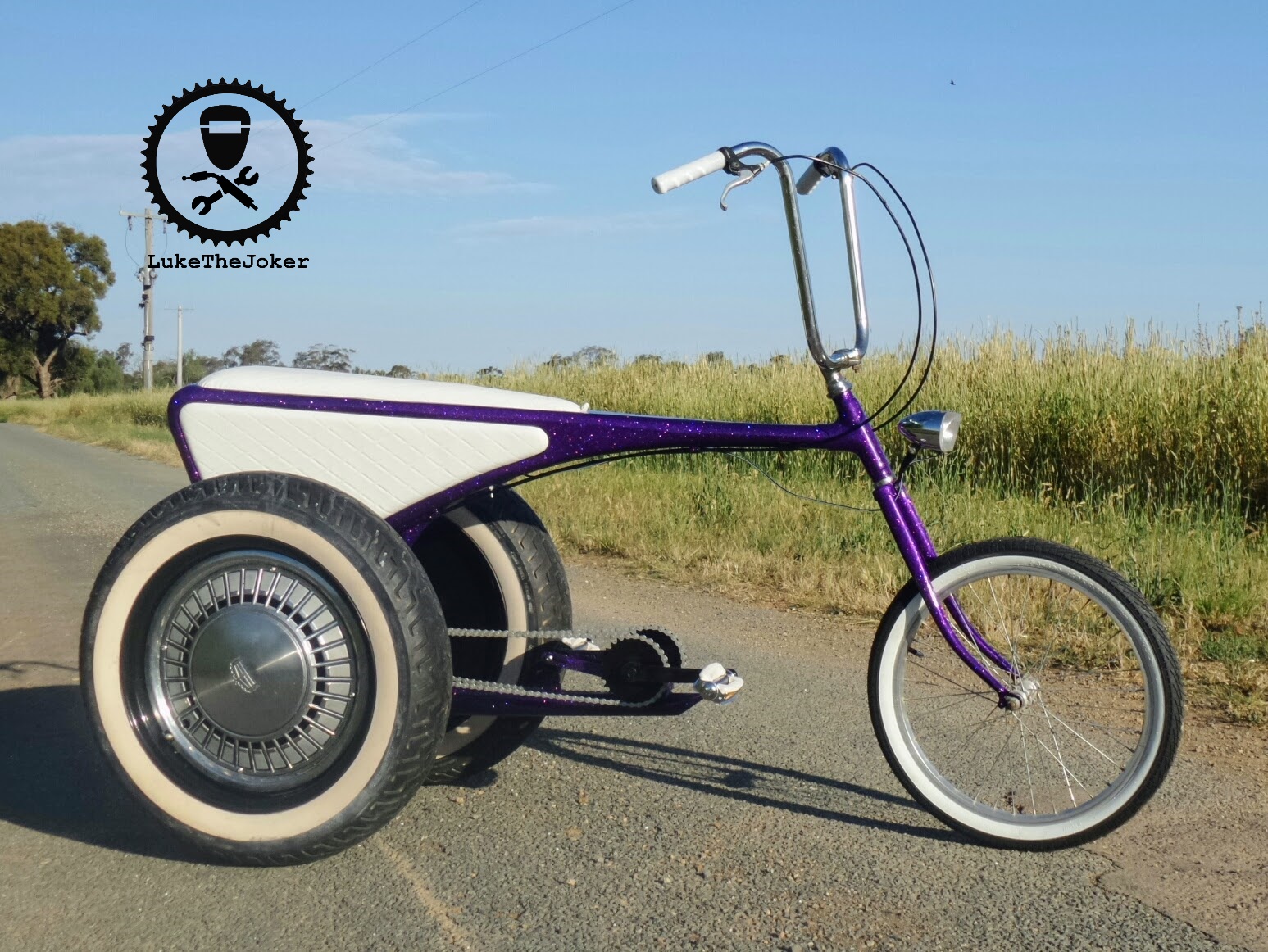 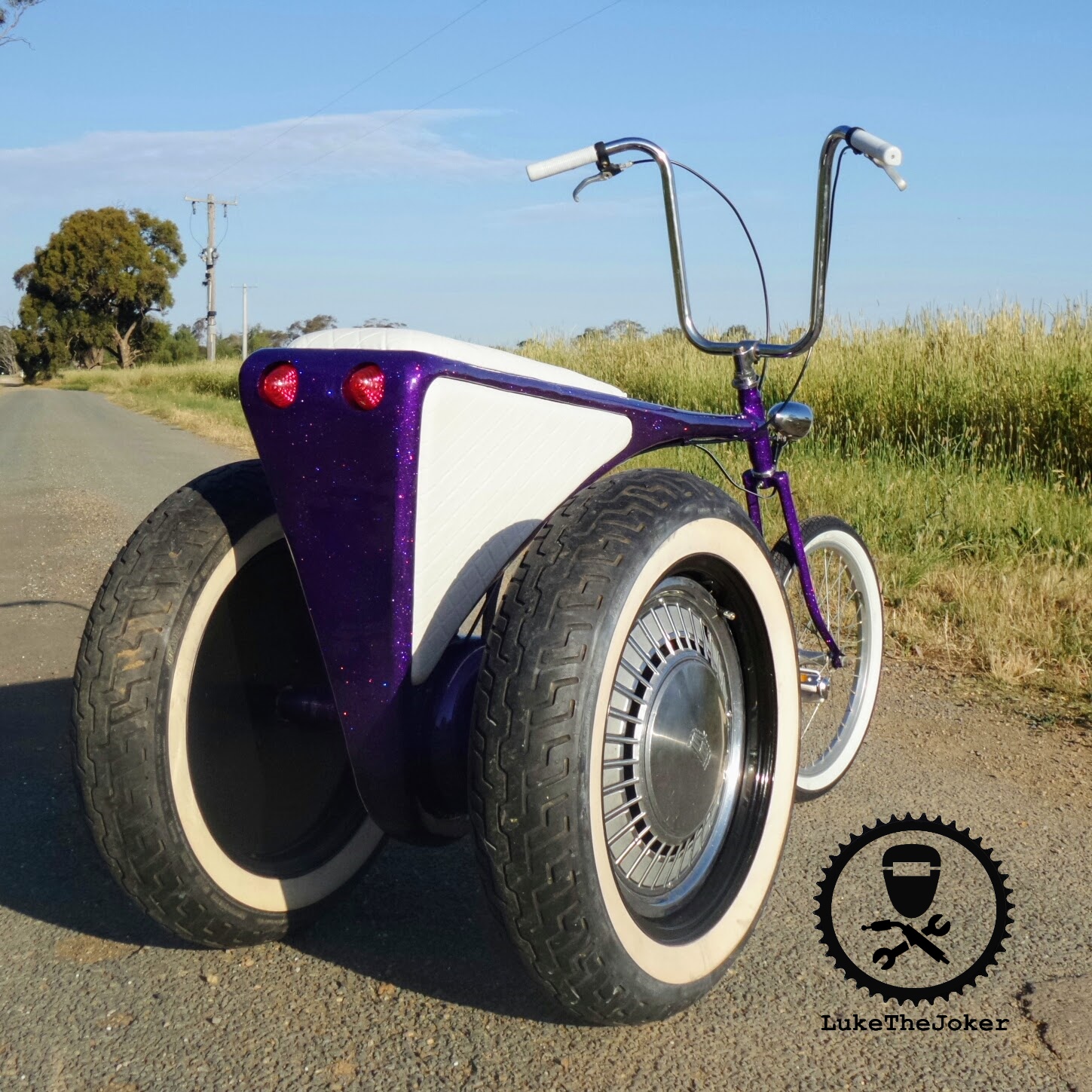 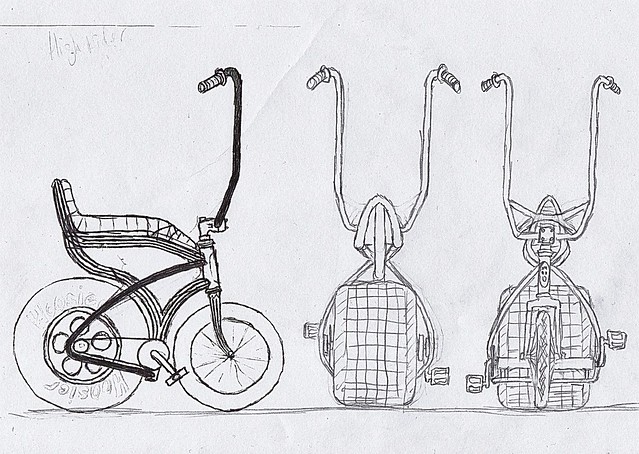 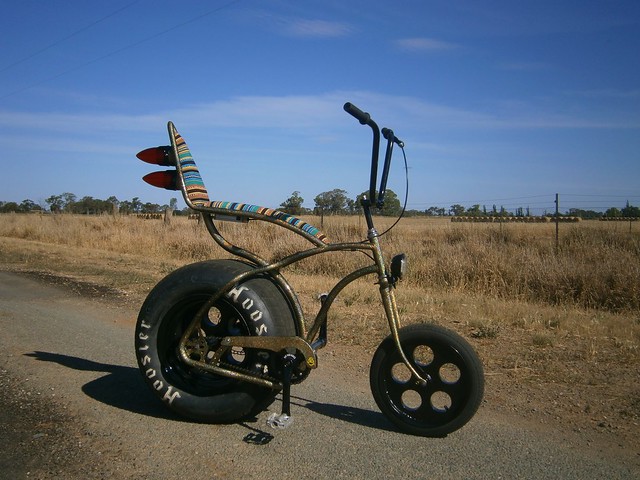 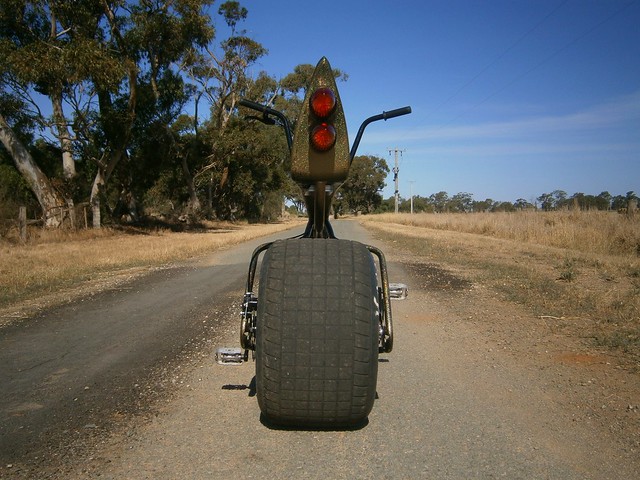 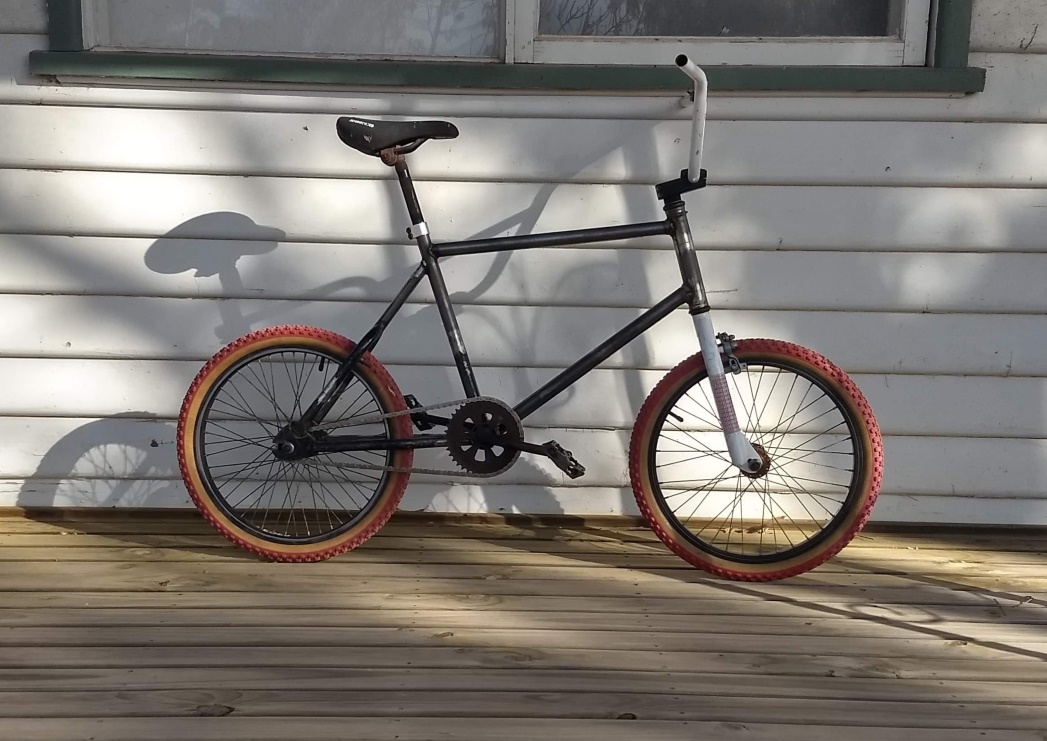 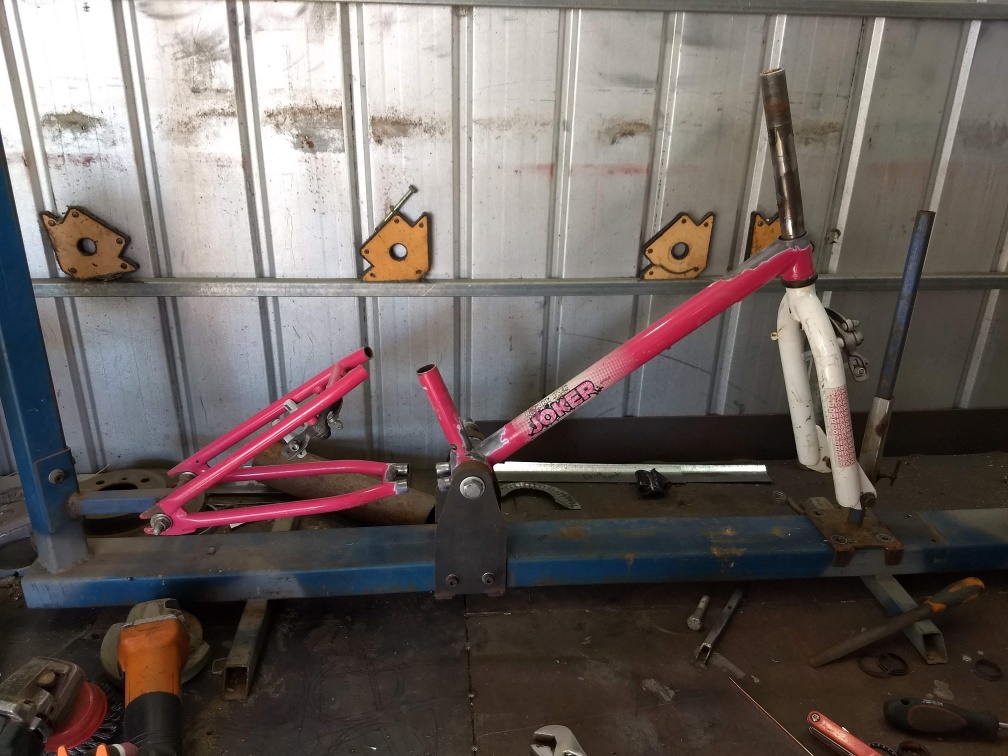 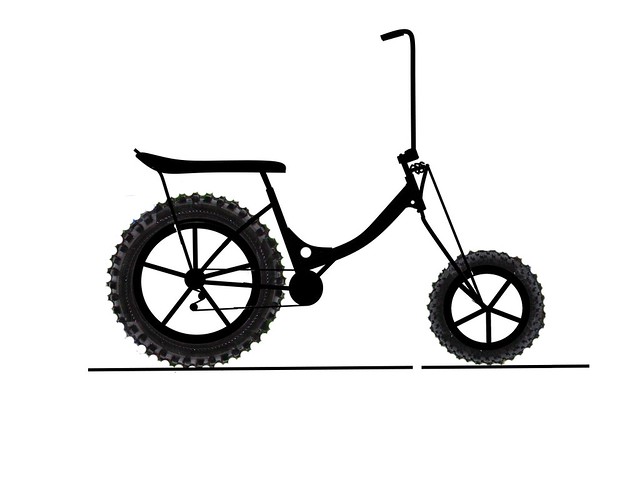 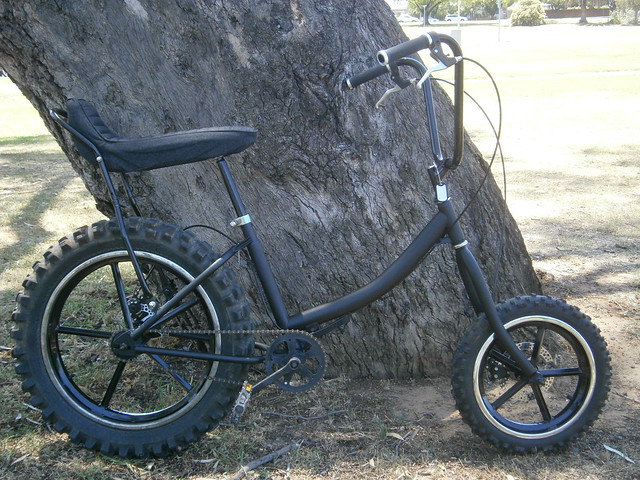 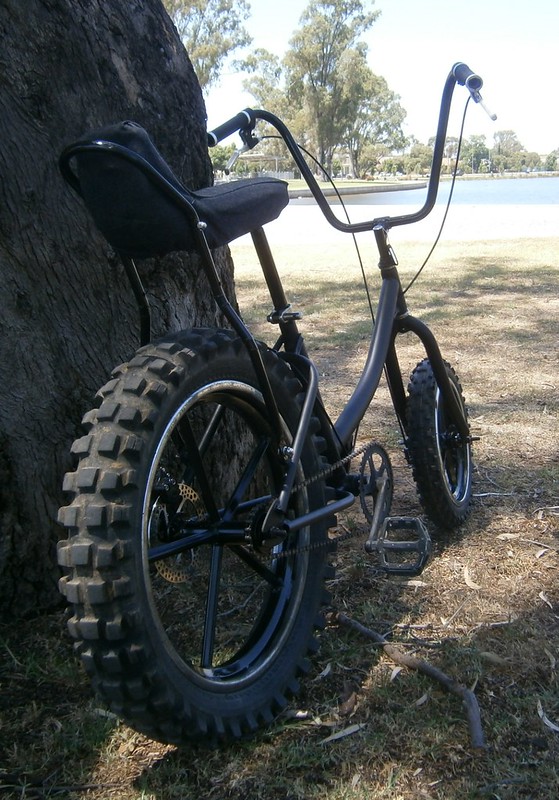 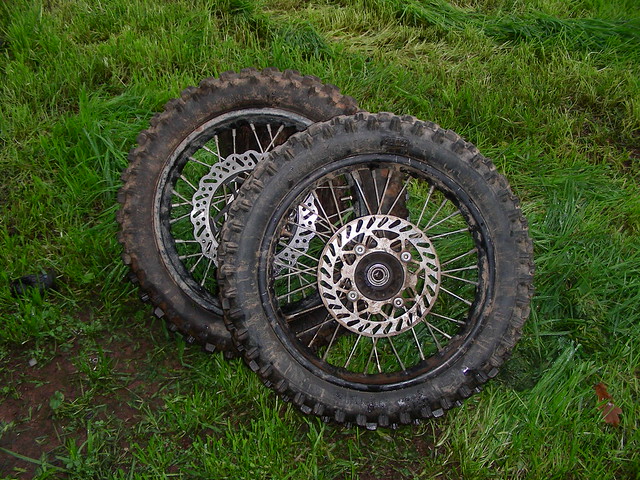 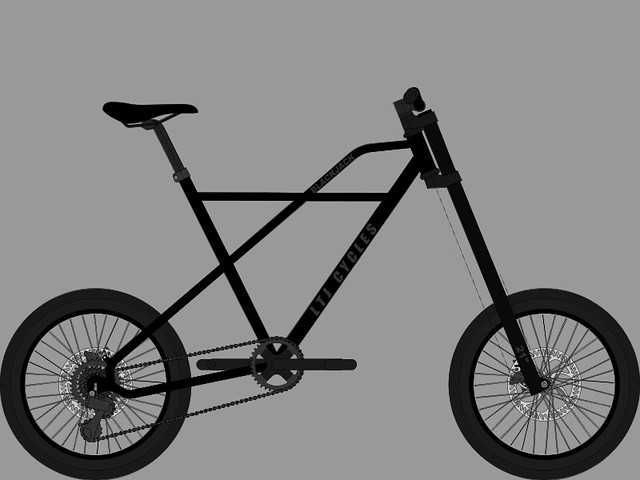 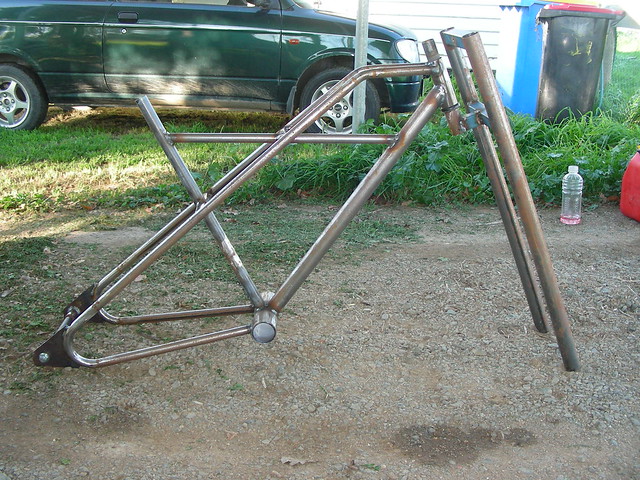 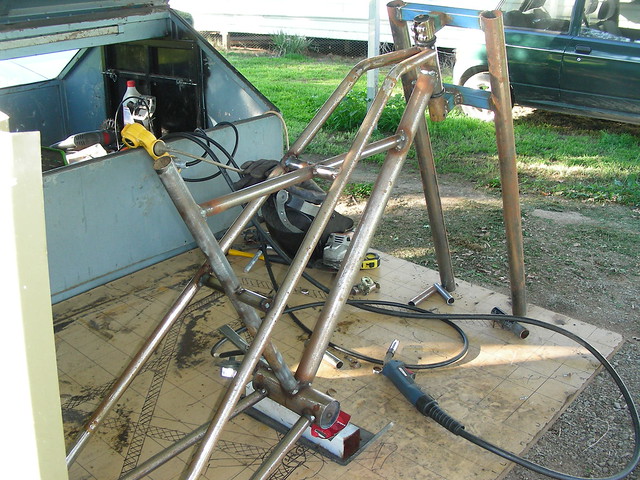 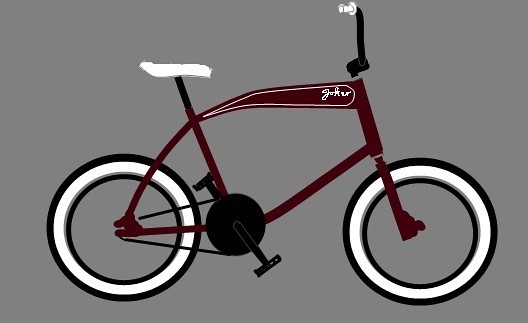 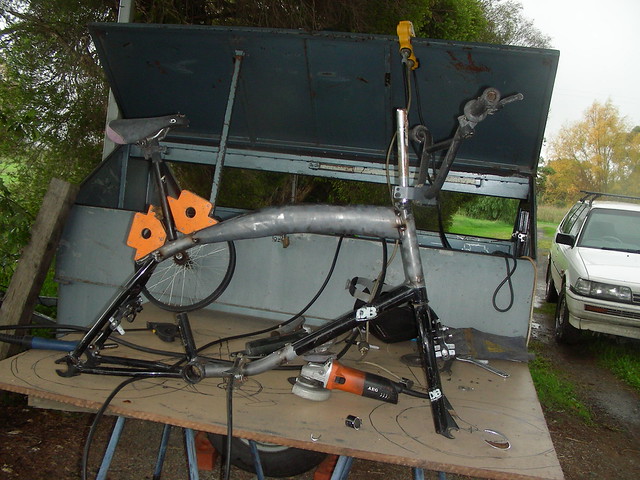 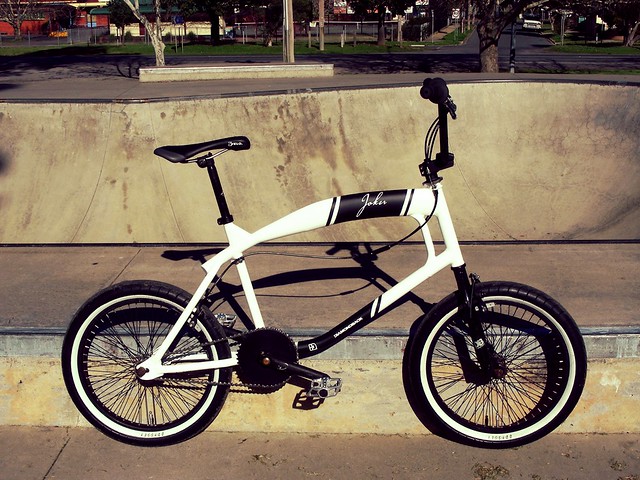 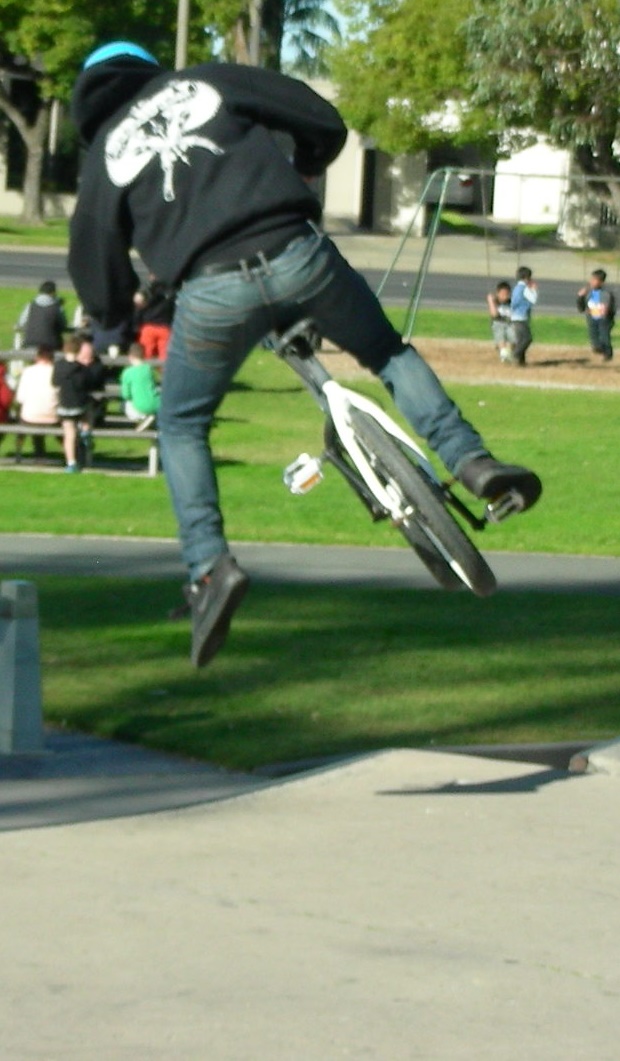 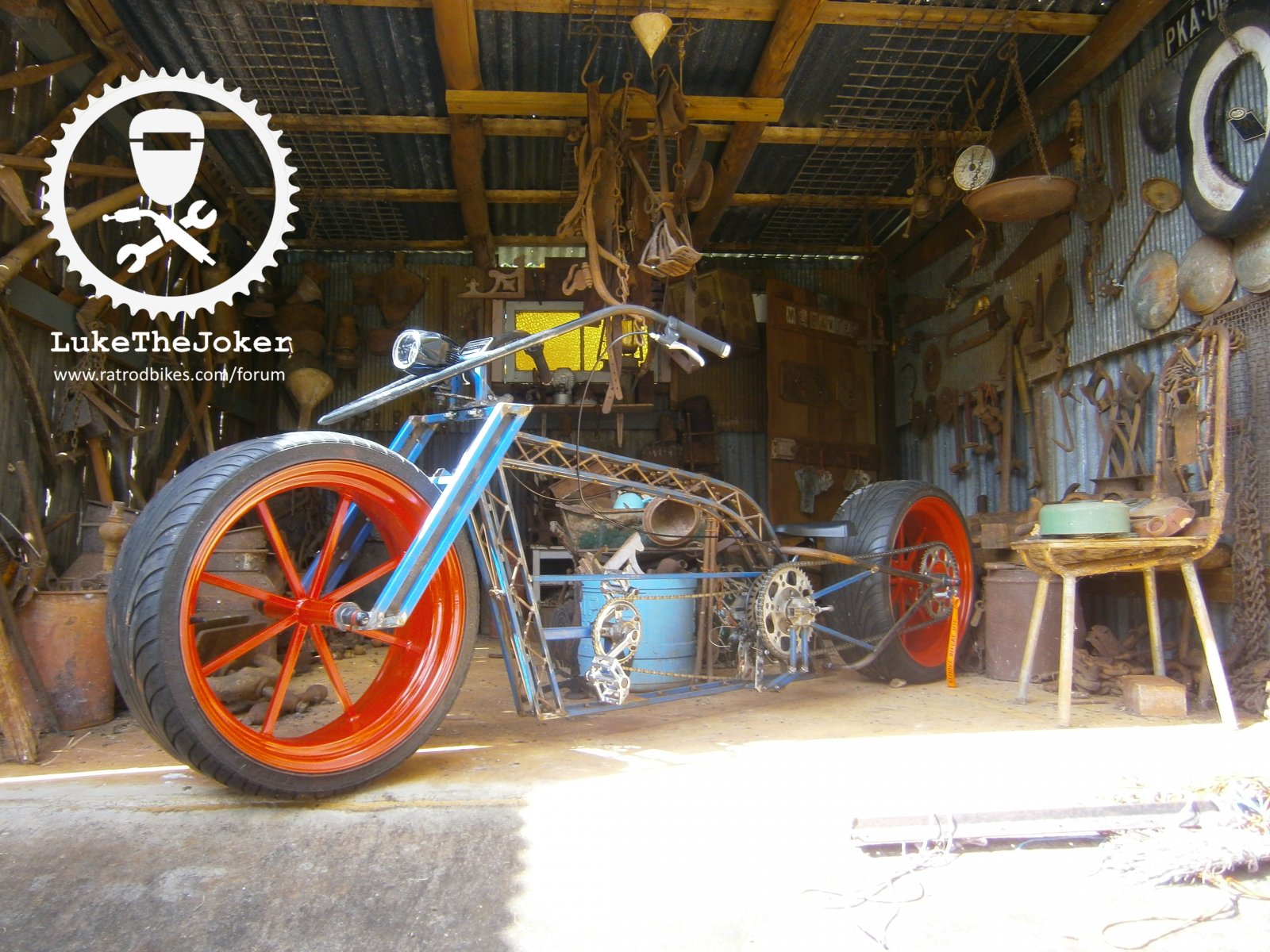 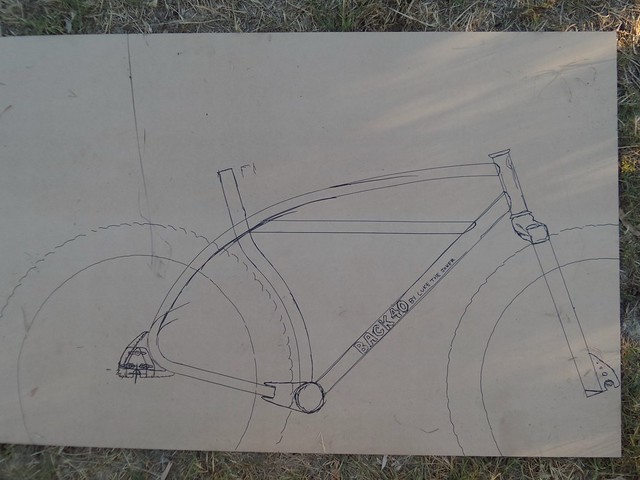 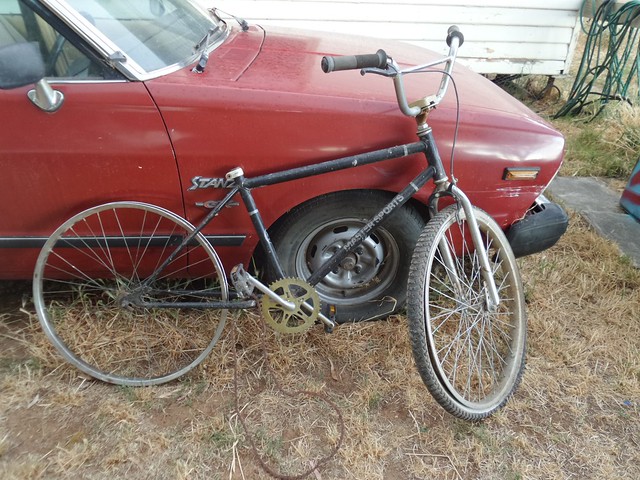 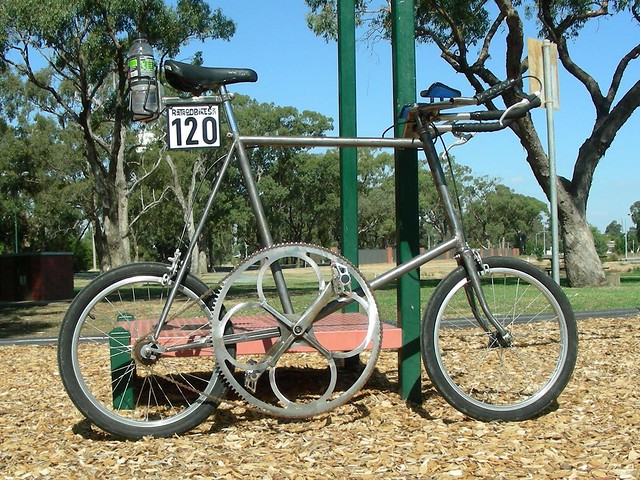 --- How To: Make a wide freewheel hub for standard or wide rims + How to join it to a car rim if you wanted to: http://www.ratrodbikes.com/forum/in...-wide-hub-join-it-to-a-car-rim-updated.68533/

--- Experiments in lacing two rims to one hub:
https://ratrodbikes.com/forum/index.php?threads/messing-around-lacing-two-rims-together.94111/ 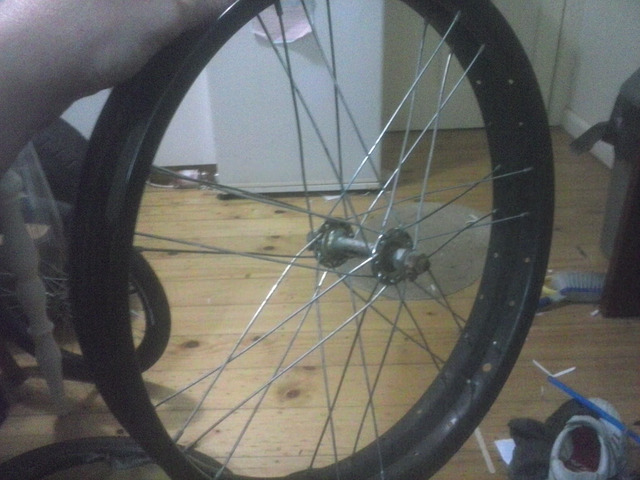 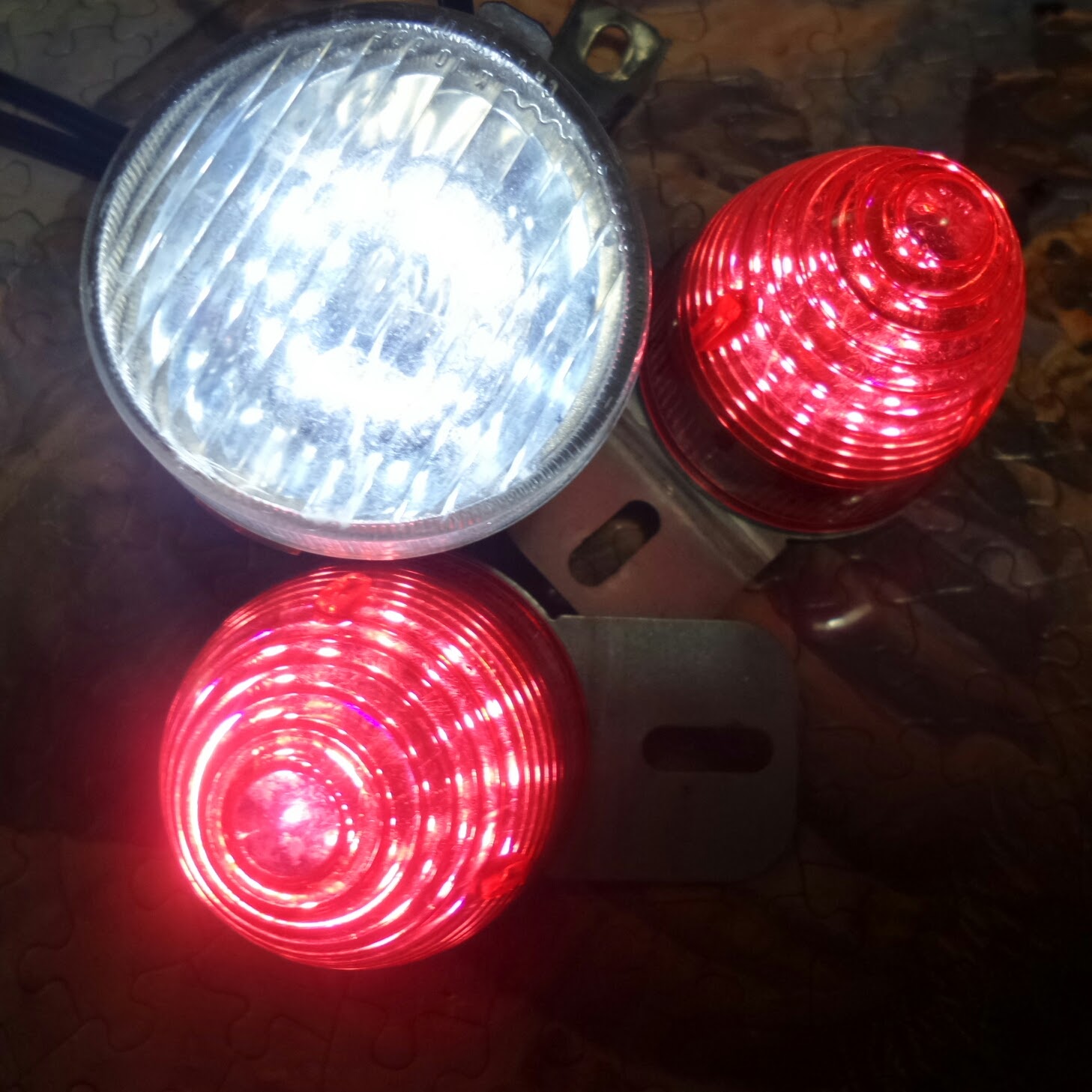 --- How To: Ream the inside of a seat tube or fork tube: http://www.ratrodbikes.com/forum/index.php?threads/how-to-sand-ream-a-seat-tube-fork-tube.85844/ 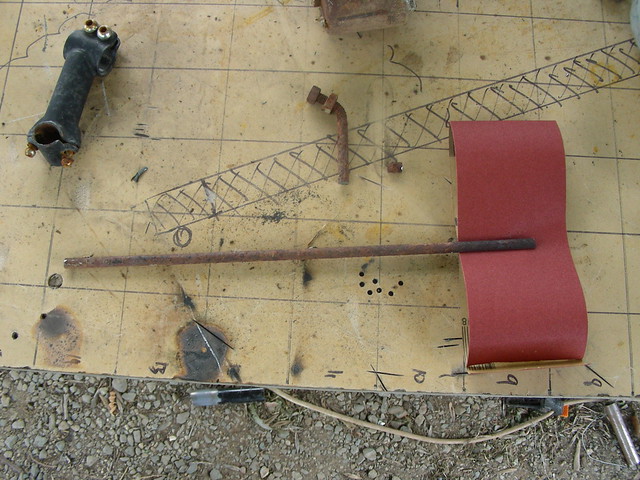 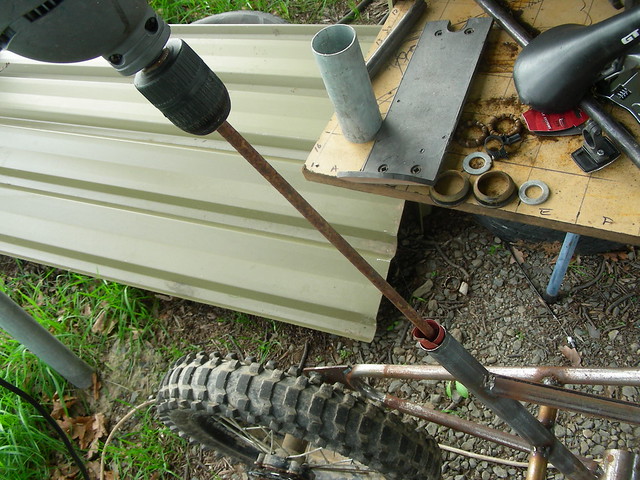 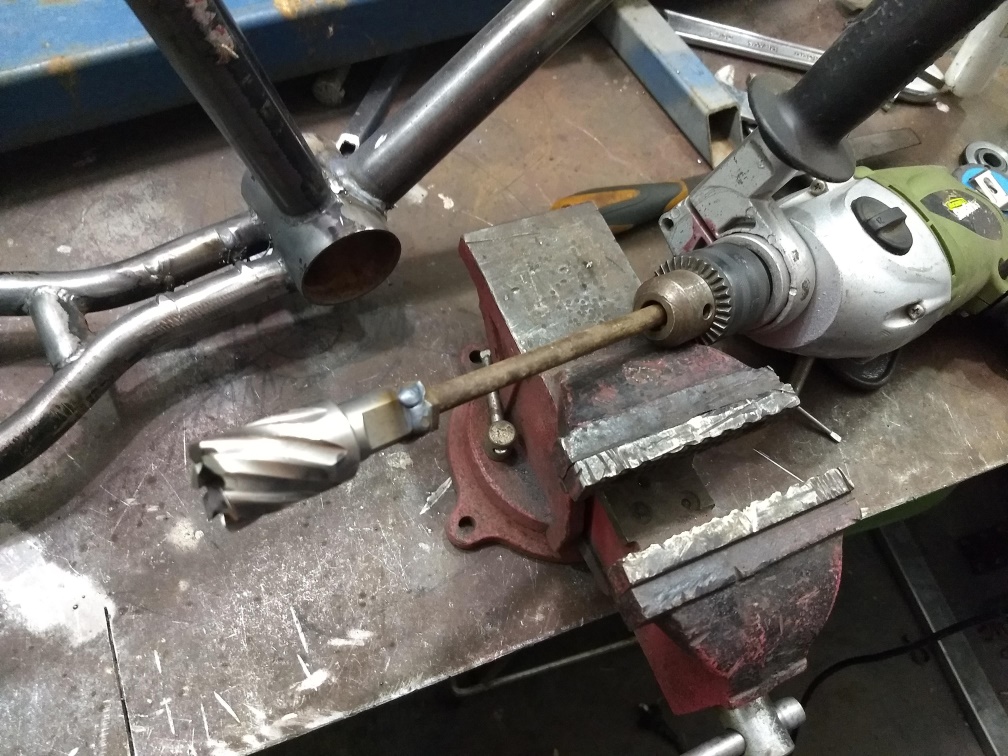 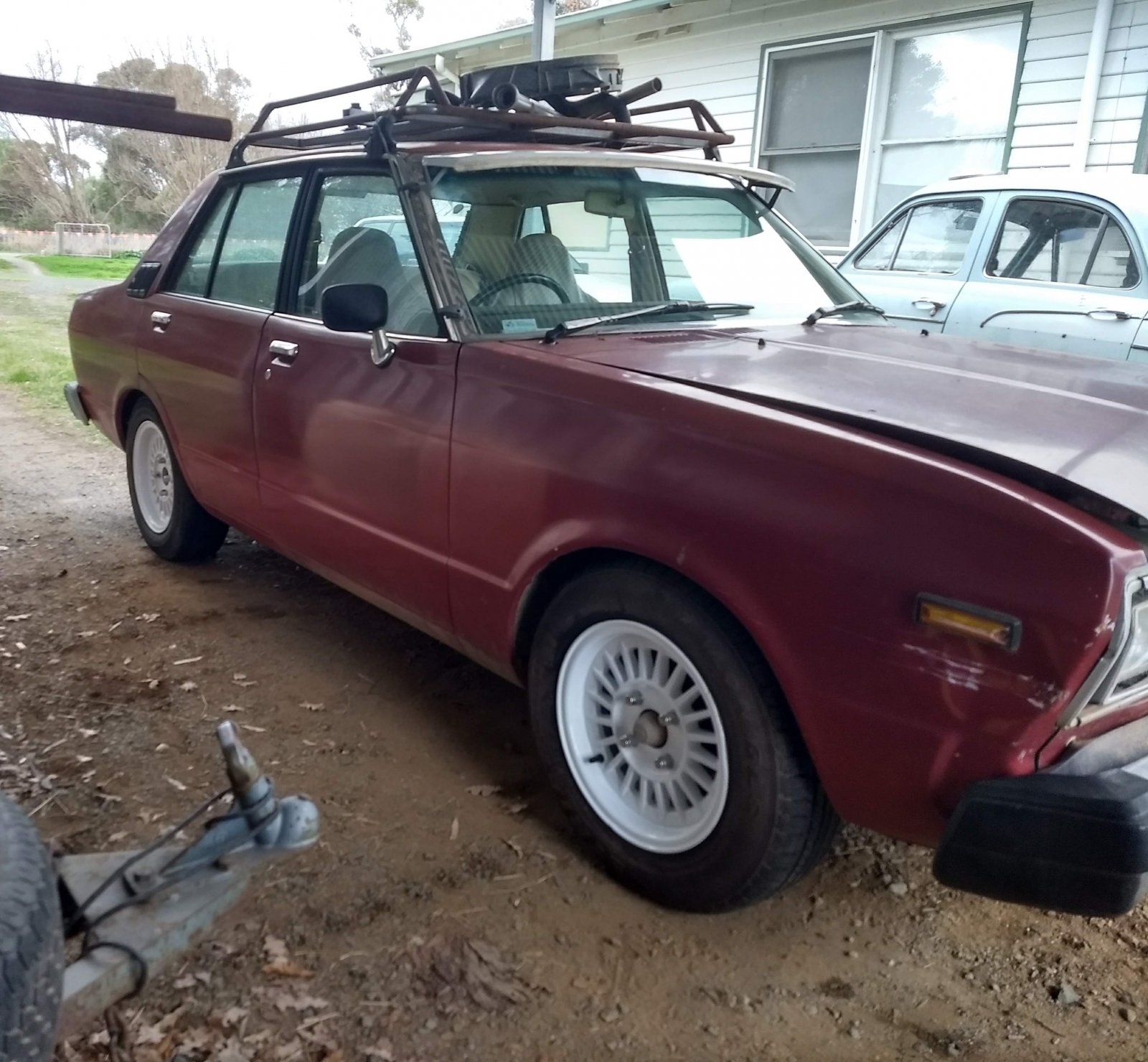 Welcome my friend good to have you.

Thanks Chris! Nice to be on board at last...
MY INTRO AND BUILD LINKS/"HOW-TO" LINKS:
https://www.ratrodbikes.com/forum/index.php?threads/lukethejokers-intro-and-links-big-moves.65513/​

Hey, now I know how to do photos properly... This is the bike I built for my brother in law.

Very cool dude I got my pictures loaded don't think I did It the right way,you have to click on it to bring them up.Look on bike ID to see them.

Found some better pictures of my 24/27 chopper build...

Was made as a surprise for my brother in law, I think he liked it!

Hello from Victoria Canada!
Doin' what I can with what I got

Have been looking through your "Timber Baron" build off bike thread, great stuff! I didnt realise, but a lot of the stuff I have been reading up on headlights and taillights came from the same build...

you do sweet work man there is no doubt!

that twin chained wide-boy rocks! I must get myself on a welding course pronto.
Tiki.............style from a different angle!


MR TIKI said:
that twin chained wide-boy rocks! I must get myself on a welding course pronto.
Click to expand...

You wont regret it! Welding is an awesome skill to have! :wink:


jayblok said:
Luke,i love your dual Sprocket set up!! My question is,is there an advantage for the dual set up or is it just for looks? thanks ۷ɑƈɑɫⅈᎾℕ ɟЯØㅆ s₳ℕⅈɫy
Click to expand...

Glad you like it!
Absolutely no advantage aside from looking cool and sounding really good on the overrun with twice as many clicks... :mrgreen:
Basically it is all for looks, there actually must be more drag from running the two chains, but it is so small as to not be noticeable.

Wow dudethat new frame is so cool nice disk and free wheel set up on one side!!!! (might steal that from ya ) The 4 spoke rims are gonna be sweet clean simple and awesome! were do you get the axle stock for the wide hubs? Oh and your muscle bike was incredible would love to hear the double free wheel clicks!!

The four spoke version ended up on the muscle bike, I just covered the spokes with those aerodiscs.

The disc and freewheel set up on one side was actually repeated on the other side, it is the same bike as the muscle bike.

The long axles are made from a couple of normal axles welded together and sleeved inside the hub for added strength, the whole process can be seen in the wide freewheel hub "How To" viewtopic.php?f=3&t=68533&p=661483#p661483

I was going to update the "how to" with a new method I had devised for these massive 20's I am currently working on, but it ended up being more complicated than the original version, so I am combining the two and will post that up when I am done, hopefully today!

thanks for the info! might think about trying some of the more radical stuff. Got my bike on the ground today and realized I need to lower the springer fork section about an inch, bummer, set me back a little! can not wait to see the big tires finished!! have you started the frame main triangle yet?