Rating - 0%
0   0   0
Hey, all, I have not been around much lately - have just gotten involved in other things - but I'm working on a project that is almost done. I'll post some pix in the next couple of days.

I bought a Dream Bike 7 speed tricycle conversion kit about a year ago and have been slowly working my way up to building a trike. The Dream Bike kit, out of Brazil, lets you bolt on a rear axle to a bike frame. It has disc brakes on both rear wheels, and a novel differential system that drives both wheels but allows the faster moving wheel to freewheel. This works by using a split axle joined by a drum that houses two freewheels. The drum is driven by a freewheel 7 speed set of sprockets. The kit comes with the hubs, discs, disc brakes, and some other parts. You provide a bike to bolt onto this assembly, brake levers and cables, shifter, and derailleur. 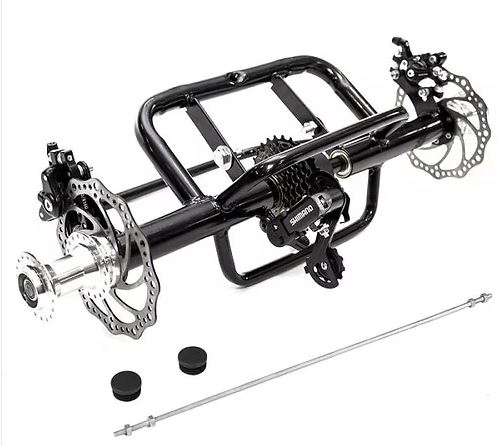 Pardon the stock photos - I will post some of my own photos soon. In the meanwhile it's easier to show the trike kit and bike frame I'm using than describe them.

I intend this to be an adult man's electric trike, so I built some 24 inch rear wheels on the hubs provided, and assembled the whole kit. I have a bunch of bikes, but my wife is limited to trikes because of balance problems. I like having a trike for riding with her. We've had a bunch of trikes as well, but most of them have had 20 inch wheels, of the Worksman type. I look kind of clownish riding one of those tiny trikes, but I have found I enjoy trikes enough to ride even when riding alone some times. So, I wanted a grown man kinda trike.

Once I got the kit assembled the rest has been trial and error, but all I had to do, I thought, was bolt on a bike, the derailleur and shifter, run some cables, install a chain, and I'd be about ready to take a test drive. My first stupefying "oops" came when I realized that, because the rear drop outs bolt on almost 2 inches higher than the axle and sprockets, the chain does not clear the chain stay.

Problem 1 with the Dream Bike tricycle kit is getting the drive chain to clear the frame.

I bought an old Iron Horse frame from somebody on CL. It just so happened this non-bike guy got some abandoned bike parts on a remodeling job he was doing, so I scored this Iron Horse full suspension frame - the beauty of which was that the chain is situated entirely below the frame. The chain stay goes above the chain, allowing easy clearance. This looked bad ..., or really ugly, as your personal taste may dictate. I did think it was kind of a novelty to ride a full suspension tricycle. The thing I had not considered? With this frame, the bike sat too tall. It was rideable for me, just at the limit of comfortable height, but the saddle could not be set any lower at all.

If you've even spent much time on a trike, you can probably guess that this led to the discomfort of exaggerated leaning on a crowned road. The bike rode nicely on flat pavement but on normally crowned pavement it leaned enough that peddling was a tad awkward. I ended up sitting off center on the saddle to compensate.

Problem 2 with this build: too tall with this frame.

So, how was I going to get the chain to clear the chain stay and a lower profile? I started thinking about using a frame with a really large rear drop out that would let me drill out a new bolt location - allowing me to bolt on the frame lower to the kit. I was thinking something like a pedal forward design frame that would let me set the saddle low, like an Electra Townie or similar... but I did not want to pay a Townie price. They seem to be going for $450 and considerably higher on local CL.

As if divine providence was at work, a couple days later there was a kind of funky looking Electra Cruiser on my local CL for $150. This looks very much like a Townie but has a curved second top tube - sorry, I forget the nomenclature. 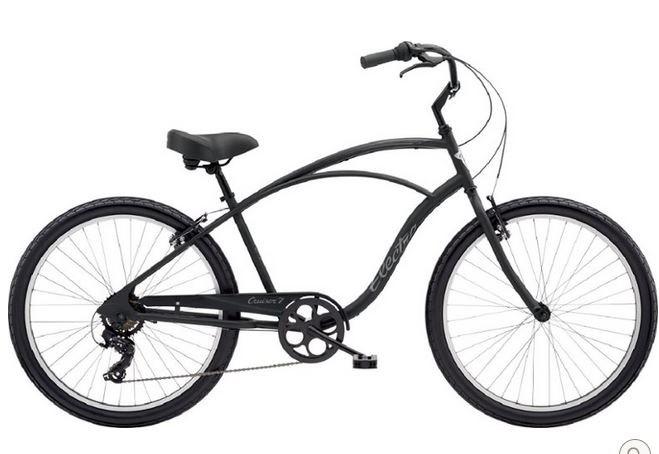 What I noticed about this bike was that the rear dropout was a large tear drop shape, with lots of flat metal besides the factory axle mounting hole and a fender mounting hole higher up and further back on the drop out.

I drilled out the fender mount hole to the size of the bolts that would normally attach the frame to the kit at the rear axle drop out slot, and bolted the frame to the kit through those holes. This had the effect of lowering the bike frame, allowing chain stay clearance, and slightly lengthening the overall tricycle. This also required me to use a longer chain, pieced together from two retail packaged chains.

I installed a basic Microshift derailleur and shifter, ran the cables, set up the mechanical disc brakes, and installed a new Electra "vintage" head tube badge. I created a rear basket by cutting down a plastic milk crate. I installed an EBikeKits geared front hub motor, battery, and cabling. When I opened the shipment from EBikeKits I discovered that they failed to ship me the LCD dashboard controller. A quick email to them, and they quickly responded saying they'd ship the missing part immediately, no questions asked. (I've used EBikeKits for about 5 e bikes and trikes now, they are great to deal with and sell great kits.)

I've got the trike rideable now, although some of the cables are just hanging loose awaiting the final part. It looks monstrous next to my wife's Worksman 20 inch trike, but it's a nice fit for me. I used a lever operated dropper seat post so I can raise and lower the seat according to terrain and use. If I'm tooling along full speed under battery power I'll want the saddle low. If I'm pedaling hard of fairly flat pavement I'll want it high.
Surly Troll with Shimano IGH, vintage Specialized Rock Hopper, various vintage Schwinns, Worksman trike electrified, Electra Cruiser converted to electric trike 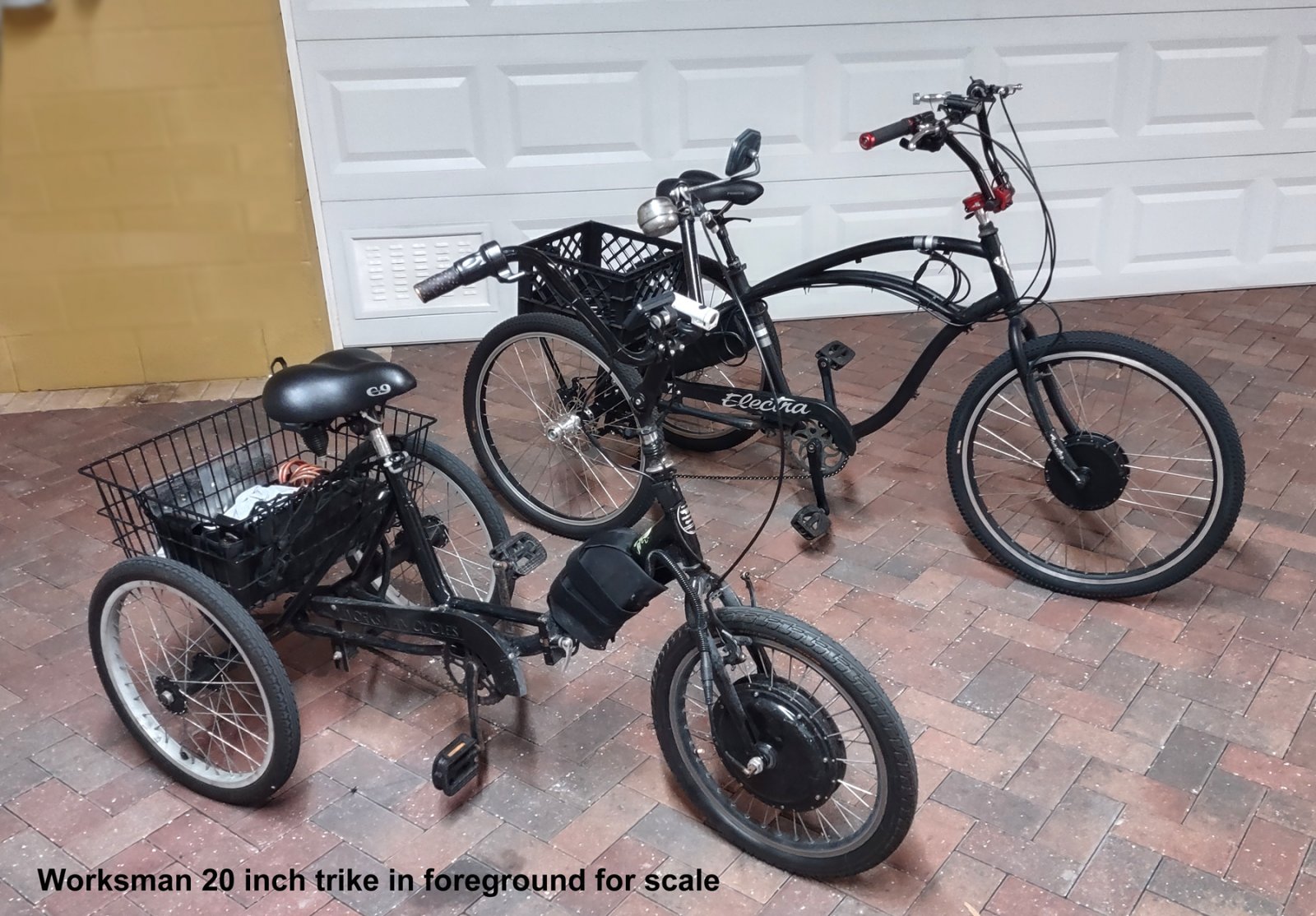 Here's my trike alongside my wife's Worksman. 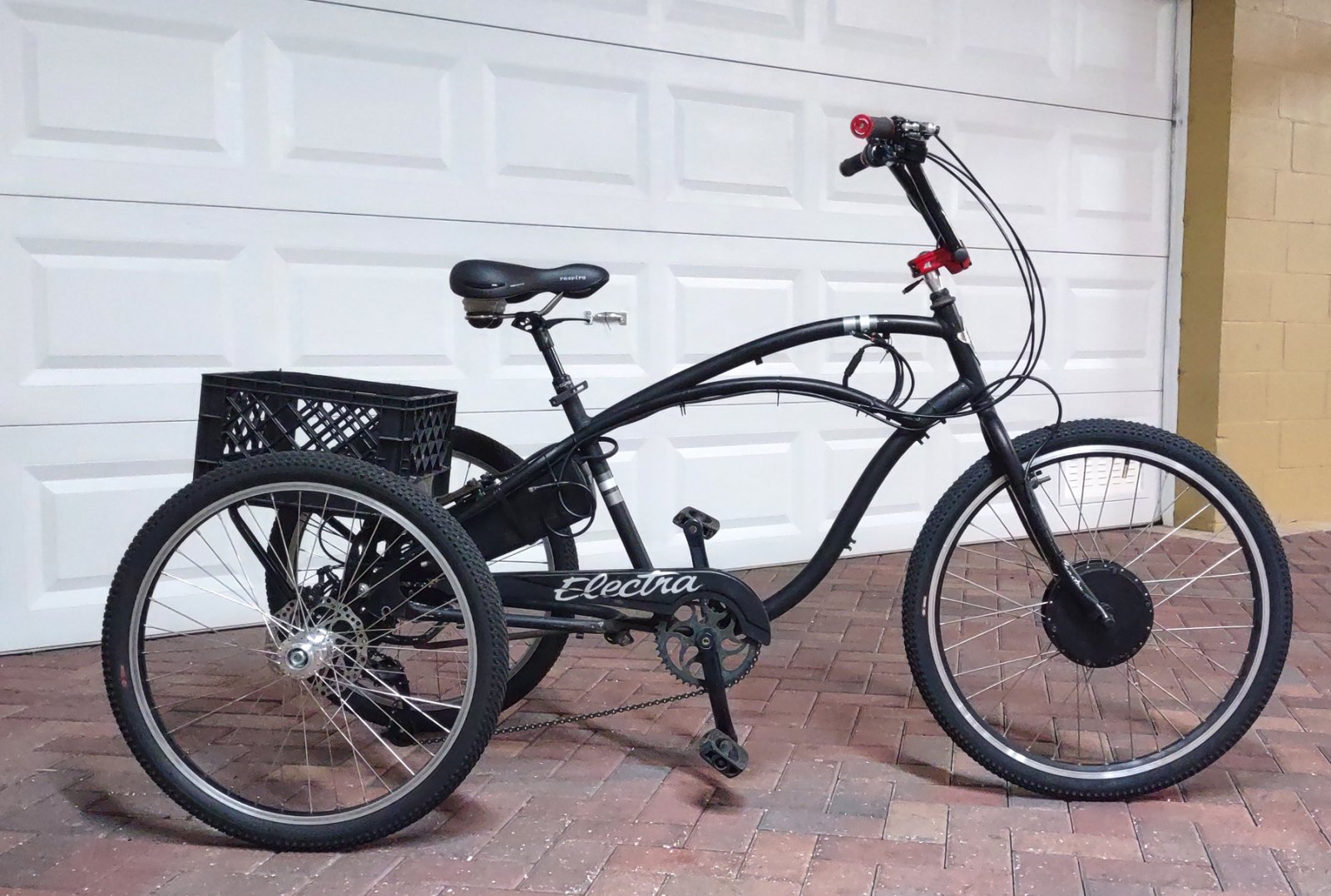 I still have some hanging cables as I wait for the last part, the LCD controller, to arrive. Once I have that, I'll finalize the cable runs and secure the loose stuff. 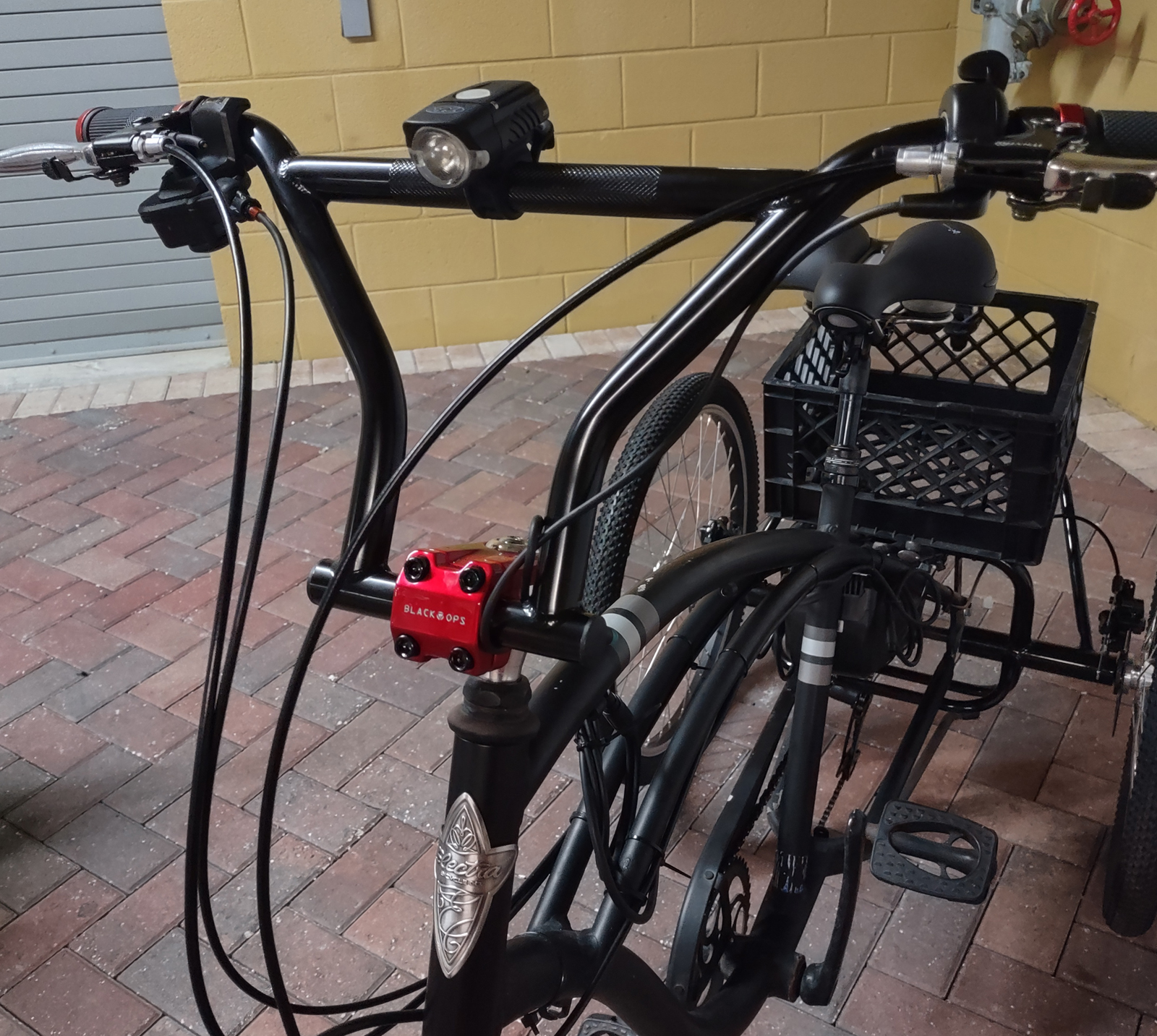 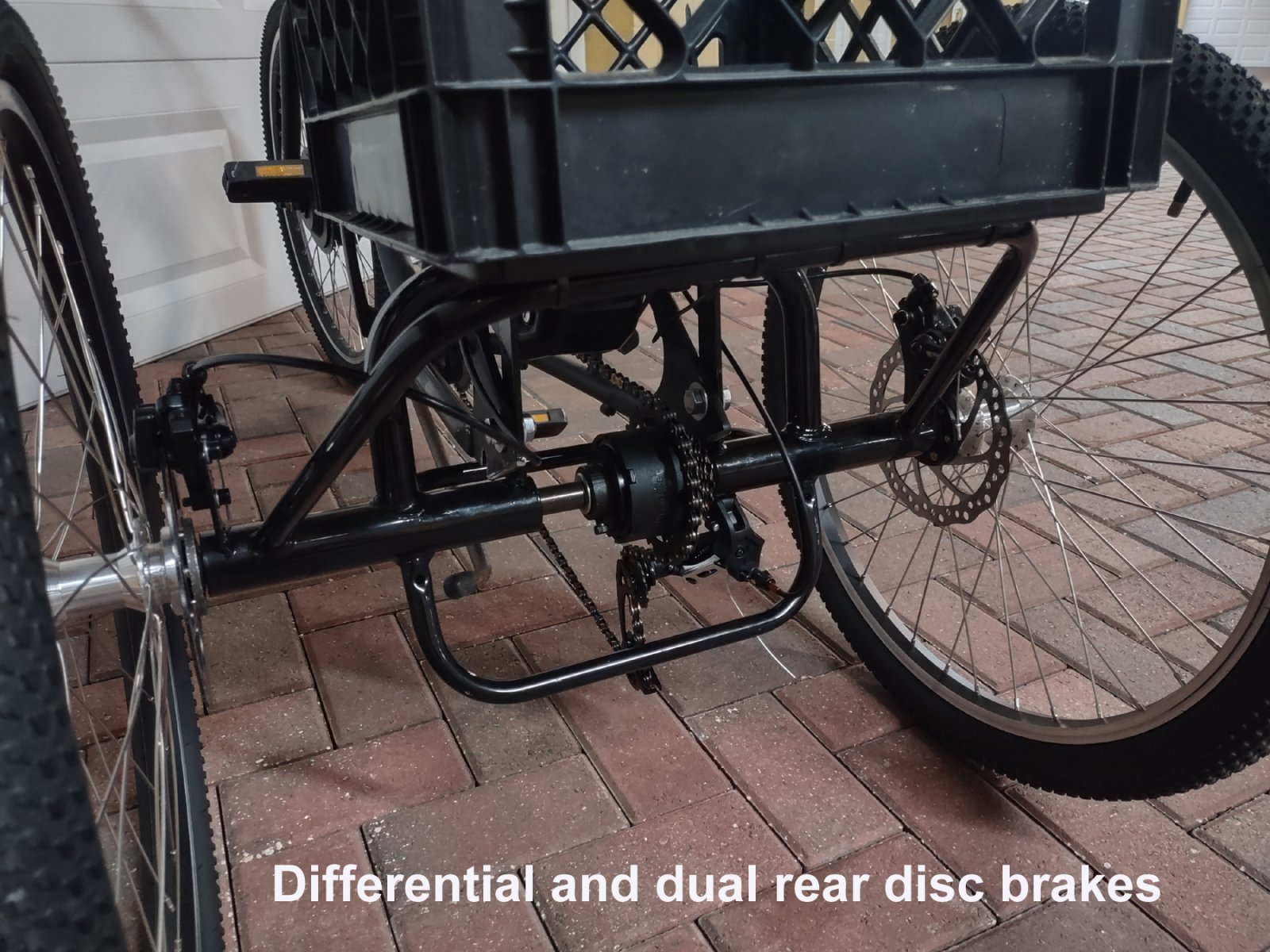 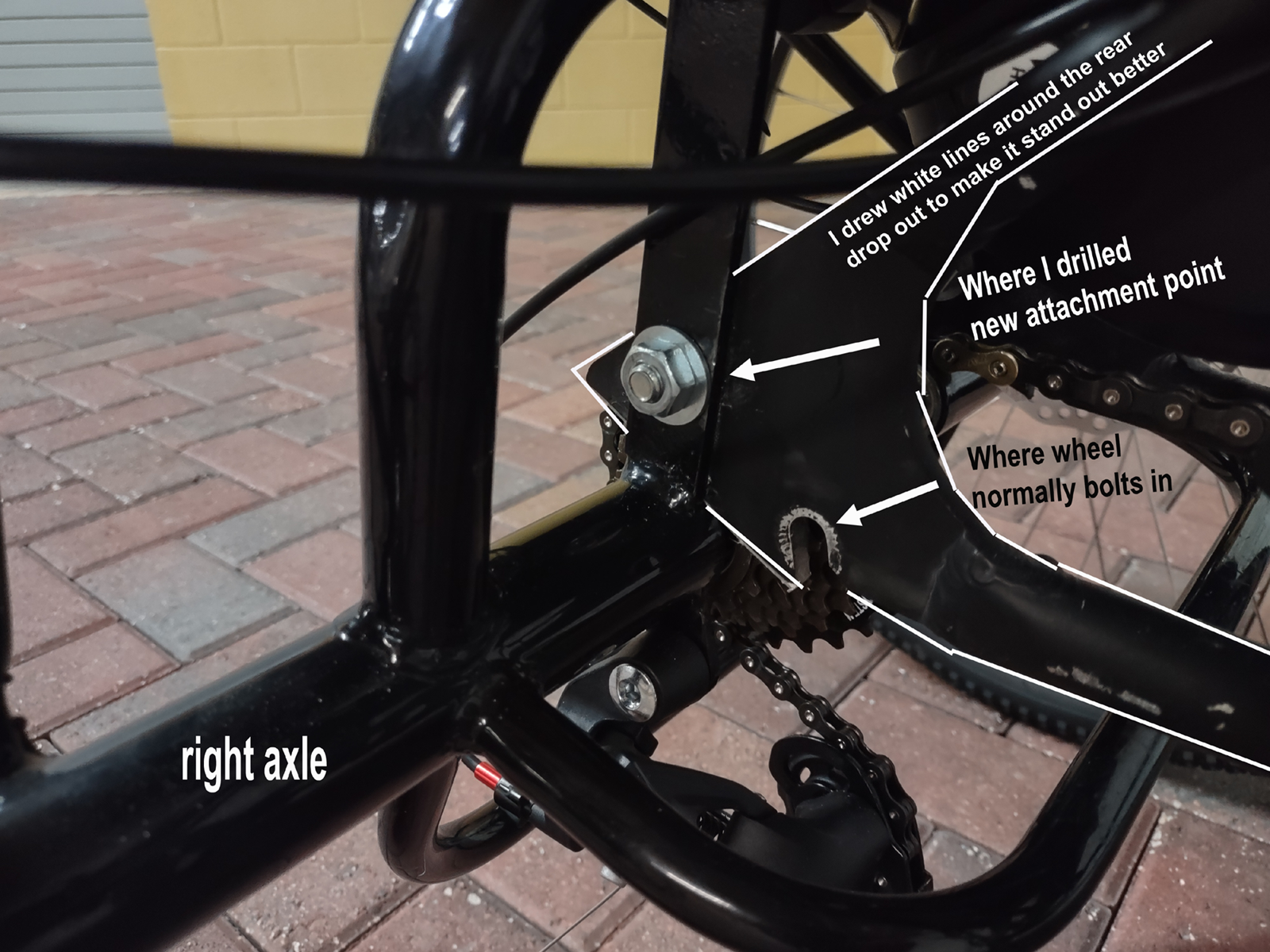 It can be hard to see black on black items, so I outlined the right rear end of the Electra frame to make it easier to discern frame from axle kit.