Rating - 0%
0   0   0
So I picked up a Murray Monterey cruiser today. It needs new tires, but is otherwise functional. It has a 6 speed on it (no markings) and front and rear brakes. From googling I'm not sure if they are original or added on later. The lady I got it from said she got it from the original owner who bought it back in the 70s. Maybe they were factory, maybe he added them on.

My plan with the bike is kind of a 2.5 step idea. first is to get it going, and then make it a muscle bike, preferably all at the same time since it needs new tires anyways. The second step is also to make it into an e bike. I've decided that a mid drive is best there, but will probably go front hub for that, since it won't interfere with the rest of the things I want to do, I can keep a wider rear wheel, and really is the simplest to install.

So first step (after new tires) is to get a stick shifter. I think they are slick, and it would definitely make the bike work better, as the current thumb shifter is just a very hard to move thumb slider, no positive clicks or anything. I'm not sure what the 6 speed is that it has now, so I'd imagine I'd end up having to get a new setup to work with whatever shifter I find. new wheel with the correct amount of gears, a new derailleur to go with the shifter, and the shifter as well.

From there I also want to get the banana seat and sissy bar. I have no idea how to do this. I hope I don't have to fabricate the bar myself though.

Then lastly as far as the bike part goes, it's the ape hangers. with the shifter now on the frame and not the handle bars, I'd imagine to keep the brakes I just need longer cables. I think this would also be a good time to install the e bike kit. They come with new brake handles that also have electronic hookups for the hub. 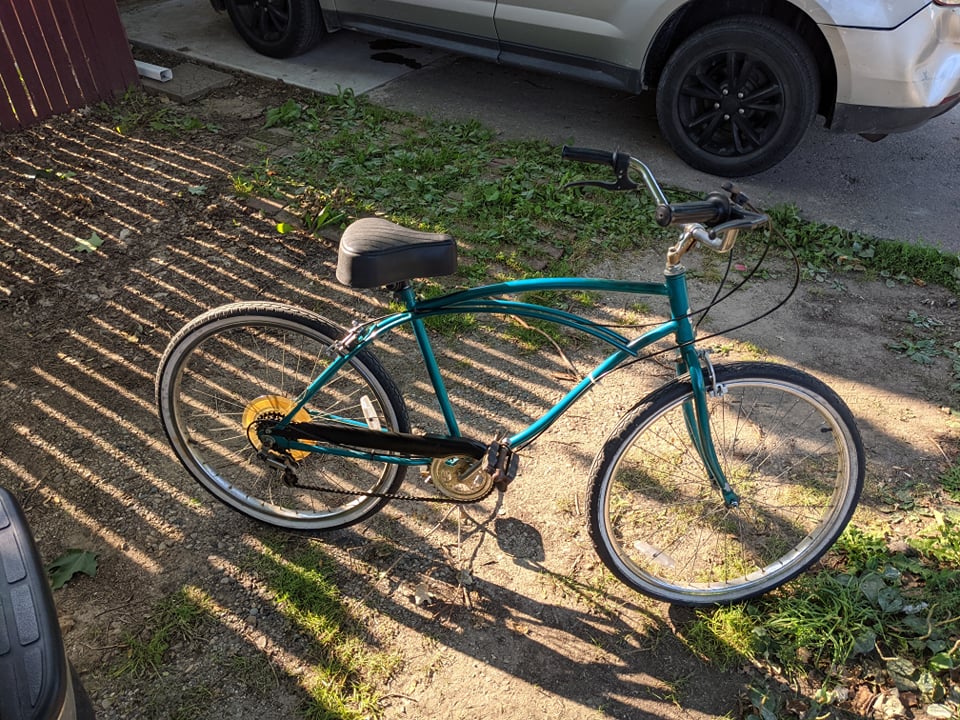 Rating - 100%
2   0   0
Sunlight still makes new sissy bars, or you might find one in the Swap meet section here at RRB. https://www.google.com/search?q=bic...PDUIQ_AUoAXoECAEQAw&biw=1254&bih=565&dpr=1.09
it's all about the bikes, man. http://www.ratrodbikes.com/forum/index.php?threads/deormans-gallery.104059/
I was going to update my sig line, but I'm not seein' anything worth plagiarizing right now.
W

deorman said:
Sunlight still makes new sissy bars, or you might find one in the Swap meet section here at RRB. https://www.google.com/search?q=bic...PDUIQ_AUoAXoECAEQAw&biw=1254&bih=565&dpr=1.09
Click to expand...

How will I know what size I need? I take it I will need the seat first?

I think my first step is to do the gears though. That I'll need help with figuring out what I'll need. I definitely want the stick shift on the frame. I'd imagine I'll need a matching derailer and a new wheel with the correct gears? Or can I just change out the gears or adjust the derailer to only work with some of them?

Rating - 100%
1   0   0
Your thumb shifter should work with 6 or 7 speeds. You will just have to adjust the limit screws on the derailleur properly.
Your first step should be to meet Sheldon.

A go-to source of information about bicycle maintenance, repair and customization
www.sheldonbrown.com
One of the most useful bike sites on the web.
Fun has no cost, only worth.
W

MattiThundrrr said:
Your thumb shifter should work with 6 or 7 speeds. You will just have to adjust the limit screws on the derailleur properly.
Your first step should be to meet Sheldon.

A go-to source of information about bicycle maintenance, repair and customization
www.sheldonbrown.com
One of the most useful bike sites on the web.
Click to expand...

I'll take a look at it

I think Im going to just go for a 3 or 5 speed and use a mid or front hub when the e bike part cones into play, as I want a stick shifter

Rating - 0%
0   0   0
There are some diy stick shifter threads in the “how to” sub- forum if you want to try that.
"My favorite childhood memory is Having Energy" - Libby Harper