Rating - 100%
3   0   0
Ah dah no, won’t finish in time. I just go my model and work space out. I first had to finish wood cutting and finishing up all the bike projects piled in this corner of our bedroom. I’ll start soon. No motors allowed in the outhouse races. You’re disqualified. Rating - 100%
3   0   0
Since I probably won’t start my bash until the build off is over I thought I’d post photos of my dumb bomb model concept. I’m going to build a WW II stick and paper Japanese kamakazi Zero and put a skeleton in the cockpit with a rising Sun headband painted on him. The “bomb” is a 25 watt light bulb with a skeleton riding it and that will be attached to the underside of the Zero. The visual pun intended here is a little obscure. The bulb bomb is only 25 watts, not very bright, in fact dim. This might be culturally insensitive in today’s idea of let’s all get along but we know that’s a joke and us old timers always say who says we can’t do or say that anymore, at least all my old timer friends say that when I attempt to correct them. 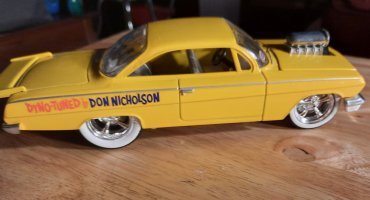