So, I noticed people putting in two bikes and I realized that I didn't have Retro Rocket finished and haven't touched it since October. If this is too finished, feel free to remove this or disqualify it or whatever, but I also thought I'd add it in so it would get more eyes on it, and there may be a few things I did that would be of interest to people. Looks done, but the shifters actually need to shift, the electrical needs to be done (headlight and dual taillight), graphics, and some other details, which I'll go back over. This is how it stands as I last left it, rideable as a single speed:

The leather saddle and grips were cleaned of their factory finish with leather prep and deglazer. It was medium brown to start, here it is with the finish removed:

Painted with turquoise leather paint. The paint scrapes right off the metal parts, so no need to bother masking it.

How it started and got to where it is:

Goofy sketch inspired by a discussion about "sex changing" bikes and my idea to make one that's as phallic as possible without being gross to have fun with it:

Then my mother died and I was left with her sad bike and I recalled the sketch and her great weird sense of humor among other great attributes and thought this was my opportunity to build this. When I was young, she used to bring me everywhere by bike, so she's really the person who got me into bikes in the first place.

Some grinding and re-bracketing to fit:

Tried a bunch of ways to make a nose cone. Then I saw someone use a lamp for the back of a headlight and I slapped my head and bought a cheap desk lamp of near perfect size.

Crazy luck, this chain link fence post capital fit perfect with just grinding down the protruding lip at the end of the cone part. It stays on really well just by compression:

Exhaust nozzle is a stainless steel cocktail shaker mounted to a piece of wood:

And a 12V trailer light mounted inside. I am adding to this because I don't think it will be bright enough to be functional as a safety device (as if anyone's going to actually ride this thing!).

That's pretty much up to date. I'll get into the shifters next, but I need to actually finish them (my original design did not make me feel safe with the wires for the switches going to be run in a manner that seemed they'd get abraded and short out to the metal pipe holding the shifters and this is with a 12V lithium Ion battery I'll be mounting under the saddle, so no thanks!).
2012 1944 8thAF tribute -- 1912 Iver Johnson Special Racer resurrection -- 2015 2000 Iver Johnson Major Taylor -- 2017 BO Retro Rocket -- 2017 BO Interrobang -- 2019 BO Cyclops

I sanded it to try to smooth it out as it's corrugated plastic drain pipe (HDPE), but after a lot of sanding, I barely changed the texture of it. Then I flame treated it, cleaned it with alcohol, hit it with some adhesion promotor, a couple coats of Krylon plastic paint in flat white as a primer, then high solids Rustoleum "2X" spray paint. I test sanded it with 400 and it seemed pretty robust, so I hit it with several more coats of paint. Finally, after all that . . . it still scratches off fairly easily.

It may be that if I had infinite patience, I could have done the coats super thin (or was smart enough to try the regular solids paint) and maybe it would have resulted in a more resilient finish. Next year or so, if this thing actually gets ridden, I might build a new body out of fiberglass instead and swap it out.
2012 1944 8thAF tribute -- 1912 Iver Johnson Special Racer resurrection -- 2015 2000 Iver Johnson Major Taylor -- 2017 BO Retro Rocket -- 2017 BO Interrobang -- 2019 BO Cyclops

Would be really cool if you could get flames and smoke
to come out of the rear end!
Link to my collection and their builds-http://www.ratrodbikes.com/forum/index.php?threads/some-of-mine.79530/#post-768922

Been following this one, be good to see it finished!
MY INTRO AND BUILD LINKS/"HOW-TO" LINKS:
https://www.ratrodbikes.com/forum/index.php?threads/lukethejokers-intro-and-links-big-moves.65513/​

A very interesting bike, this could be one of those whacky racers.
'Build it, and they will roll' - Check out my WBO-2015 thread - 1910 INDIAN BOARD TRACK
http://www.ratrodbikes.com/forum/index.php?threads/wbo2015-1910-indian-board-track-replica.89167/ -Built by a Girrrrrrrrl.

Painted the switches for the lights (They're bored a little off center because I just drilled through using the factory hole in the bottom, which is off—these are handles to coping saws—but at least they were consistently off on both of them). 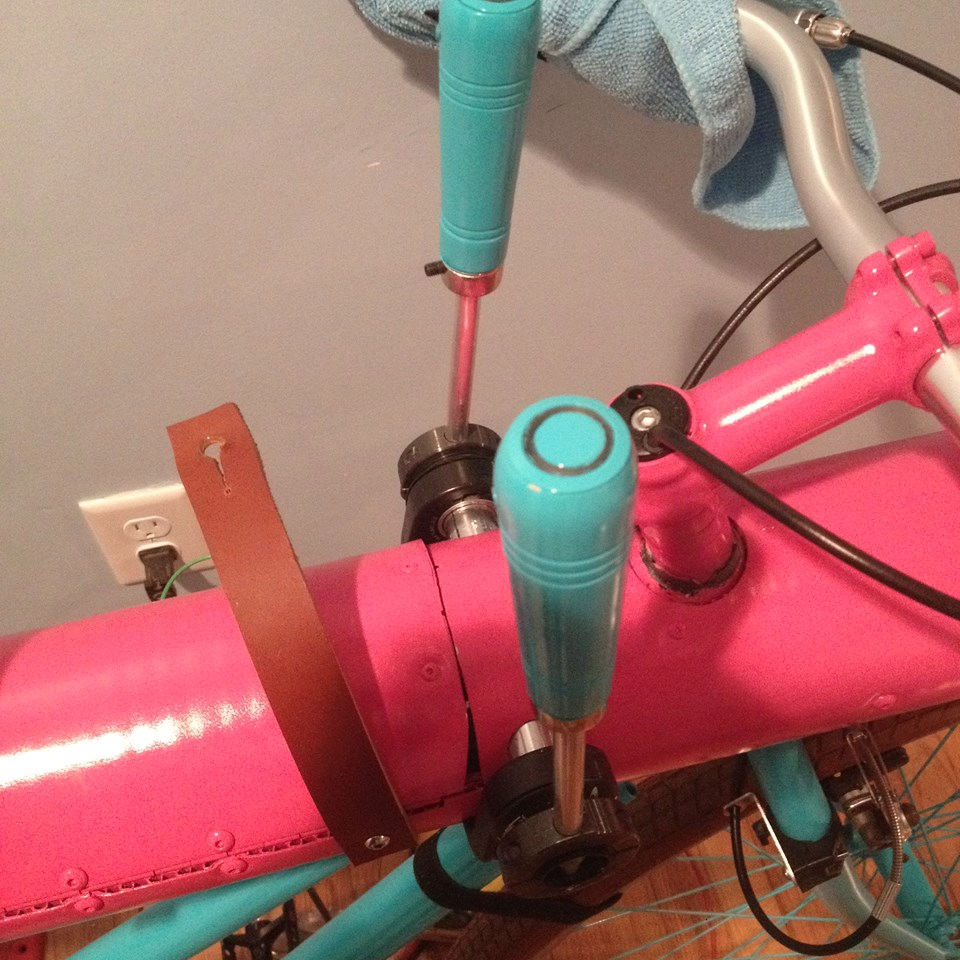 Brake cable routing. Front down the fork, rear into the rocket body. 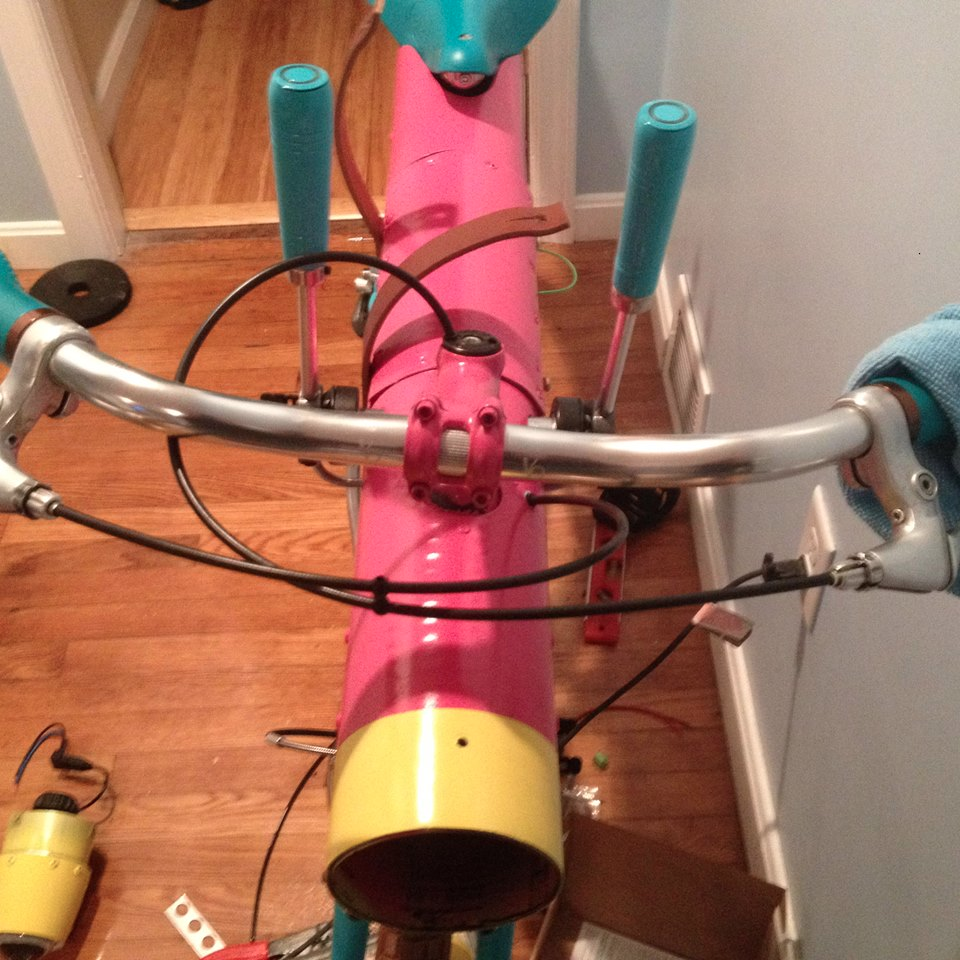 Instead of going through the piece of handlebar that holds the shifters, I ran them more safely out the bottoms of the tubes that serve as mounting rods for the shift handles, using extension springs to make the wires for the switches fit the look better. 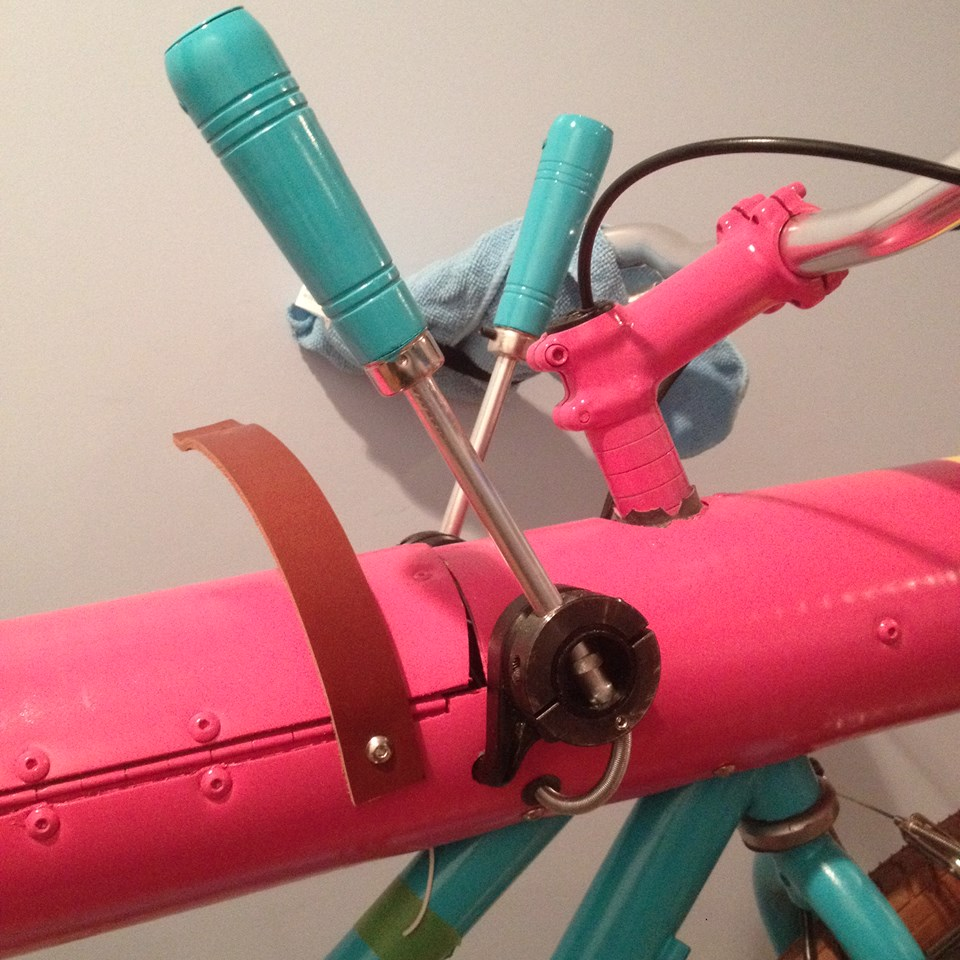 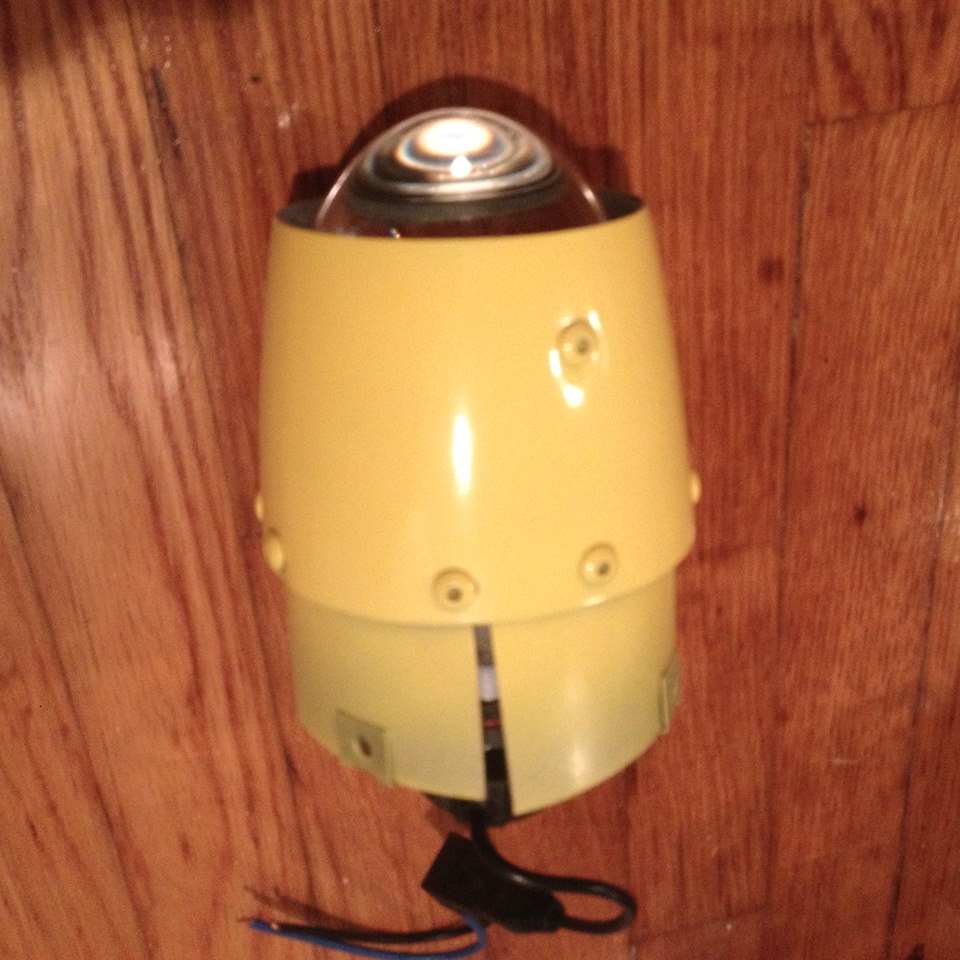 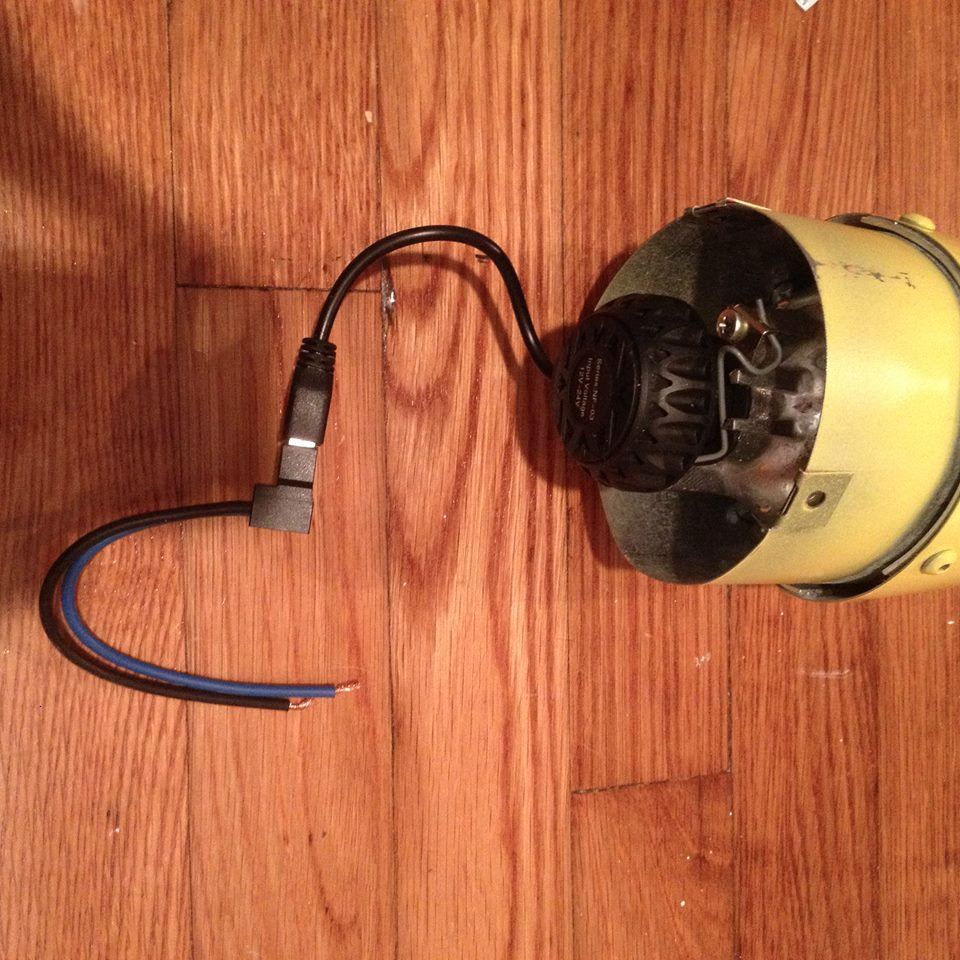 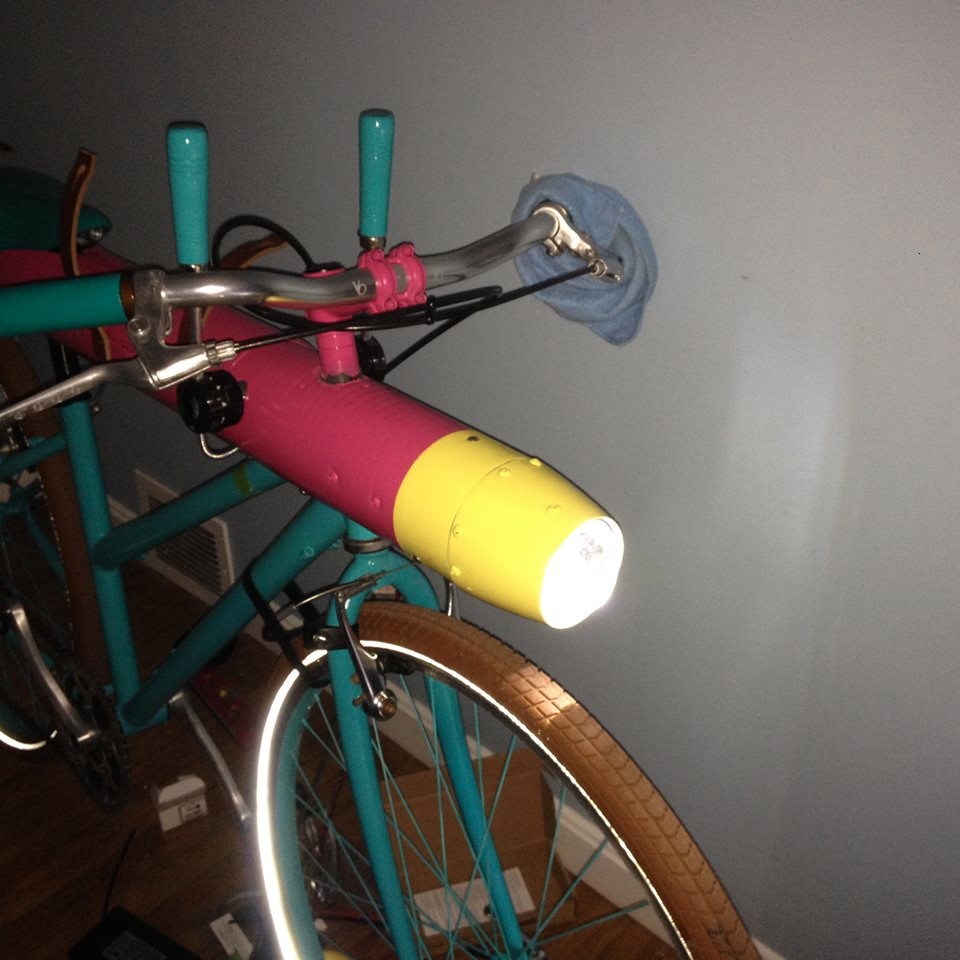 Here it is with no flash (lousy iphone camera obviously has a small sensor, so it's terrible in low light), so you can see how much light this throws even out to the sides. This is just running off the battery as a test. I'll try to get some outdoor illumination shot at some point with a better camera so you can see the distance it shines. 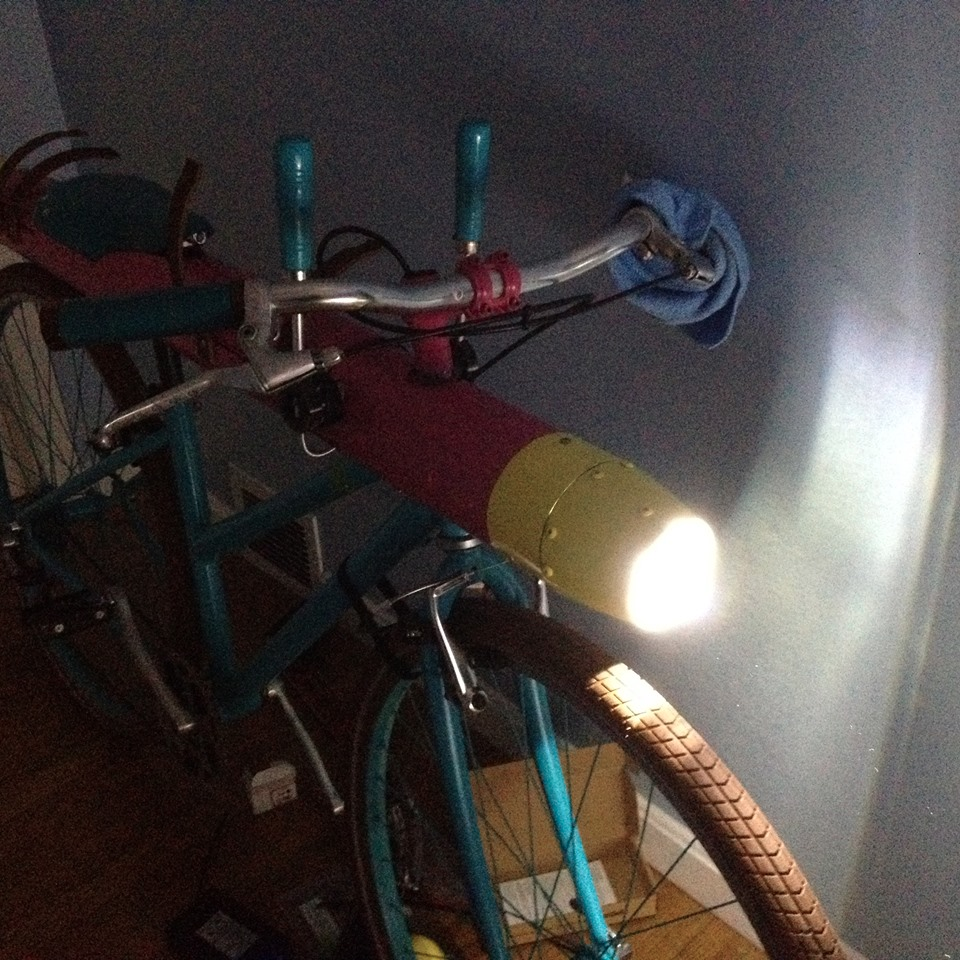 Looking good! Loving the shifter work you are doing!
MY INTRO AND BUILD LINKS/"HOW-TO" LINKS:
https://www.ratrodbikes.com/forum/index.php?threads/lukethejokers-intro-and-links-big-moves.65513/​

Some really creative rat rod stuff going on here! Thanks for joining in!
Click to expand...

A very interesting bike, this could be one of those whacky racers.
Click to expand...

I think technically its a "Giant Crotch Rocket"

Finally got the tail lights settled and I'm pretty pleased with how it came out. 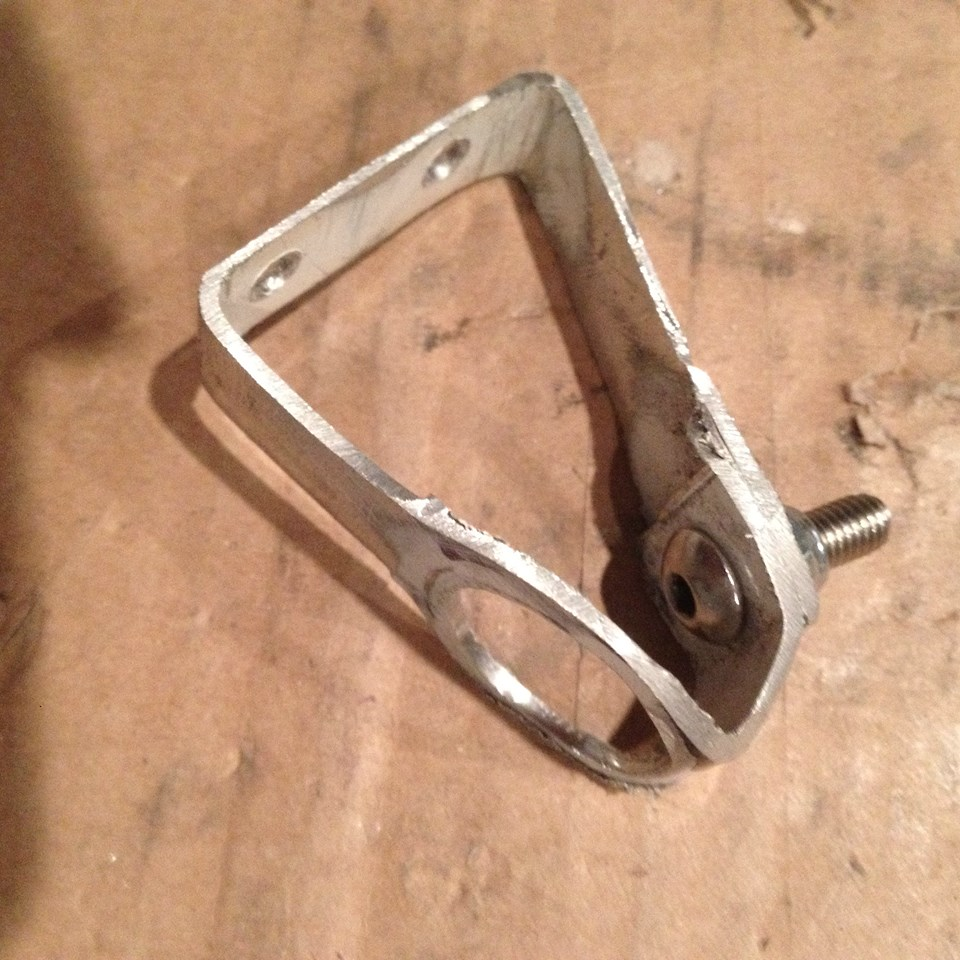 cocktail measure with LED light inside. I ended up using thicker wire, but forgot to get a picture. It's wire, you've all seen it (actually the center conductor from some coax cable): 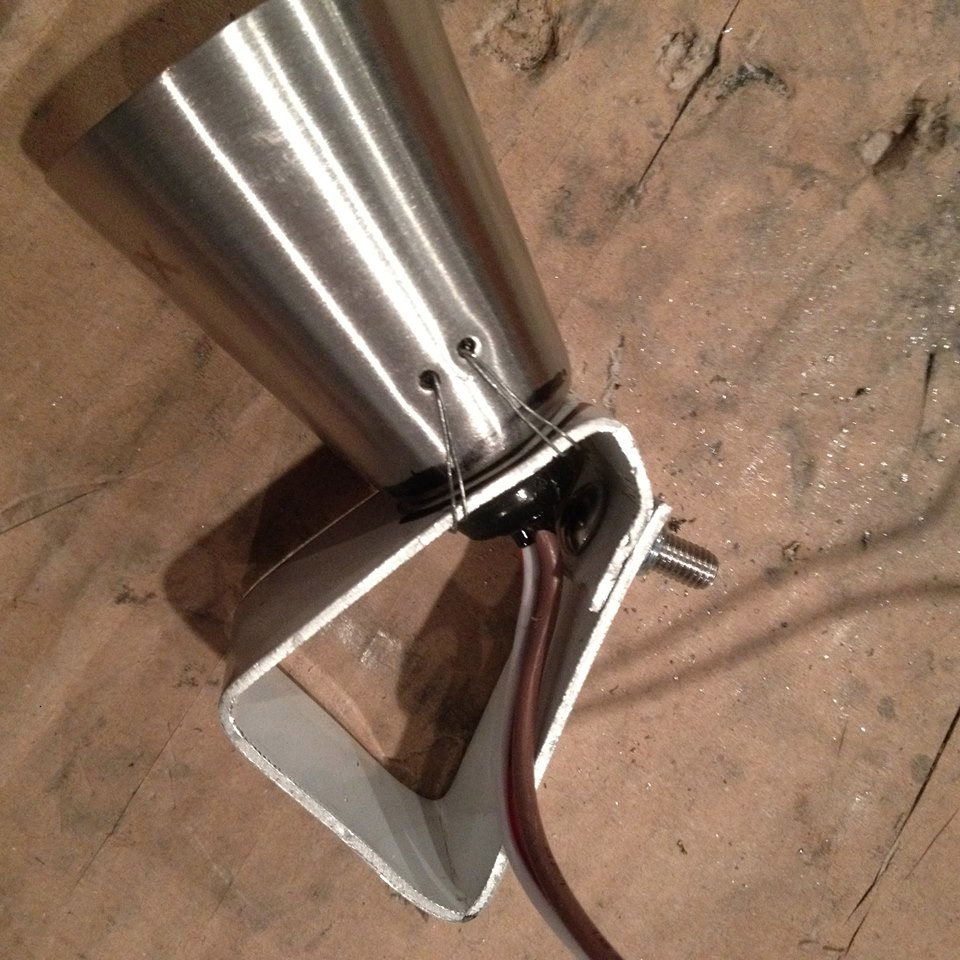 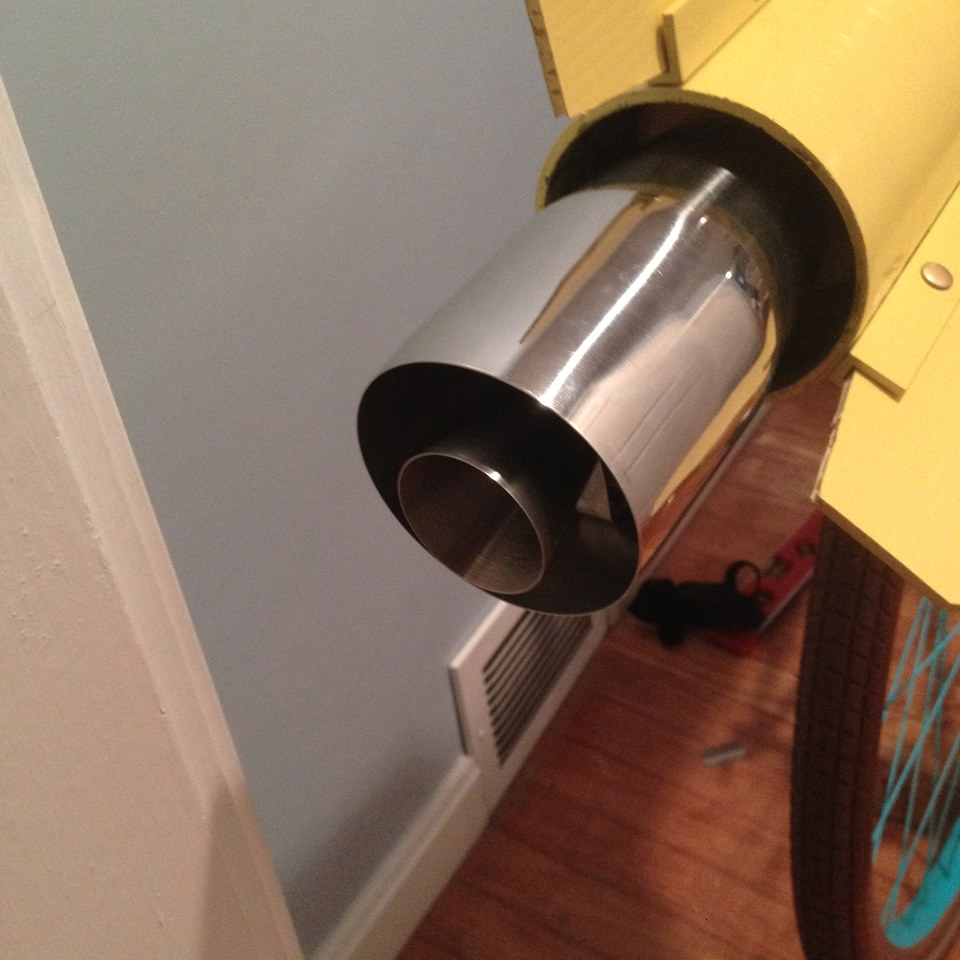 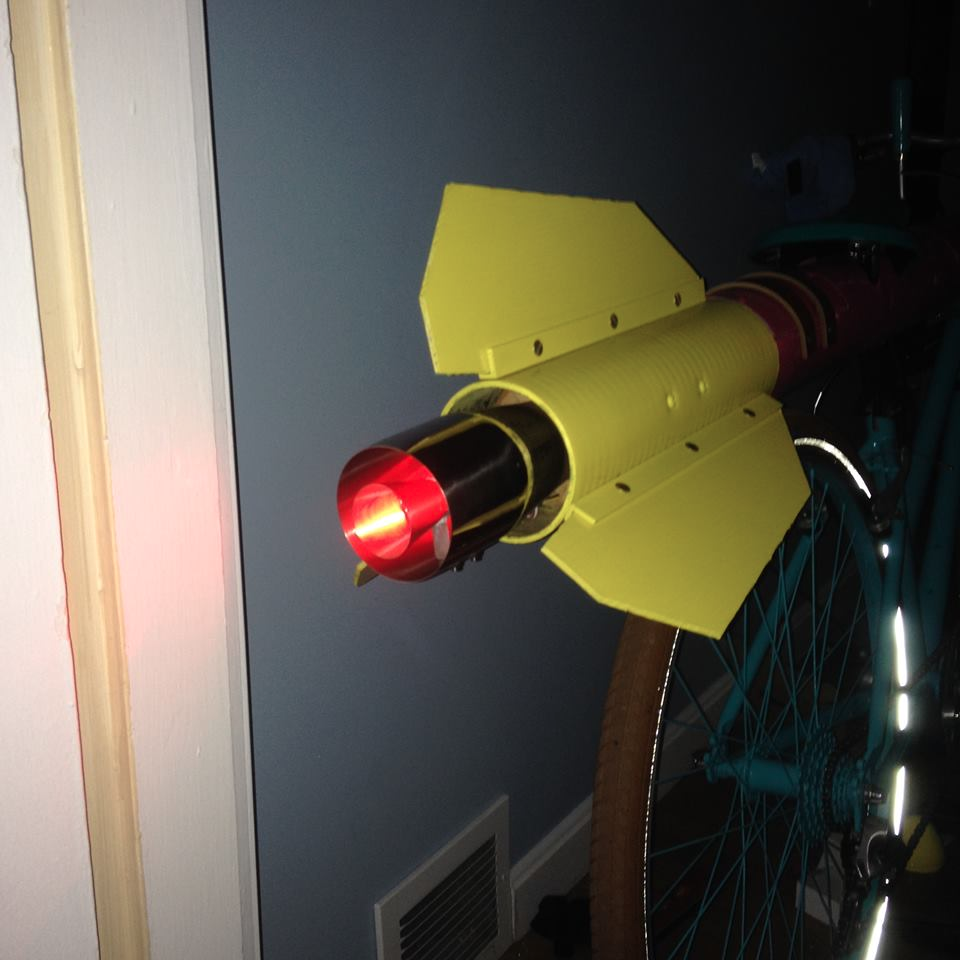 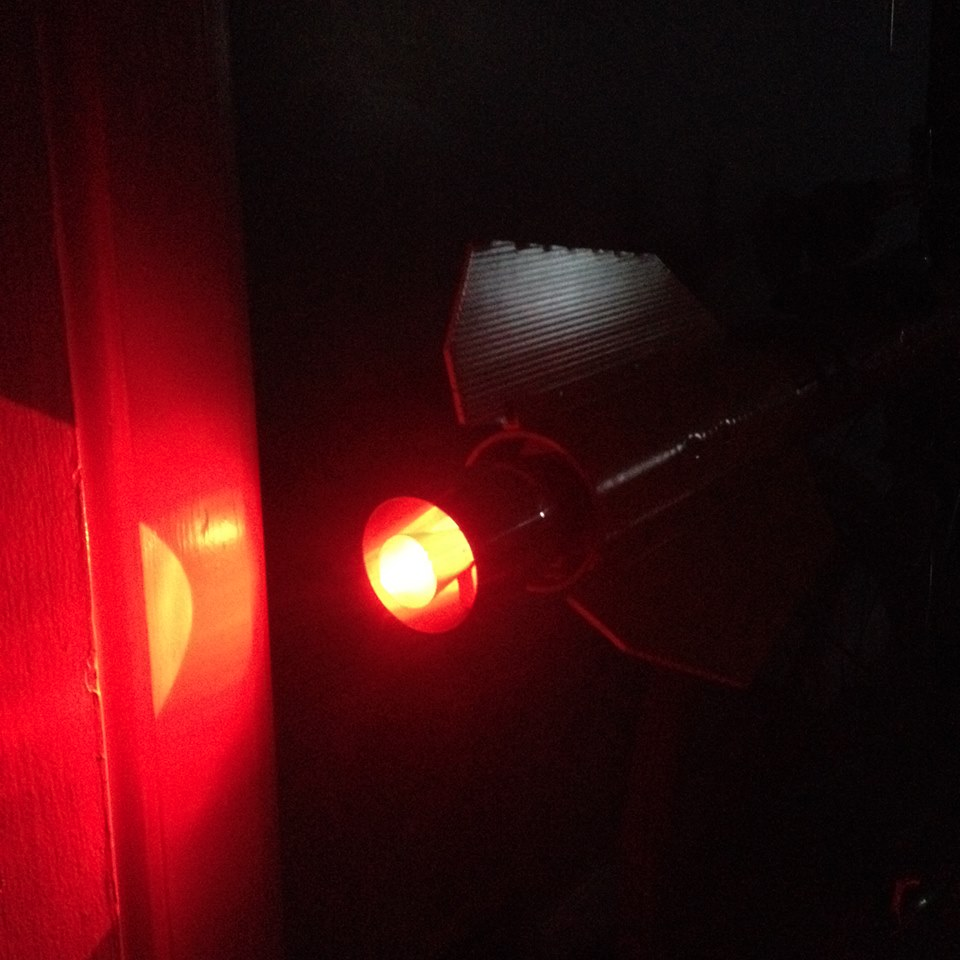 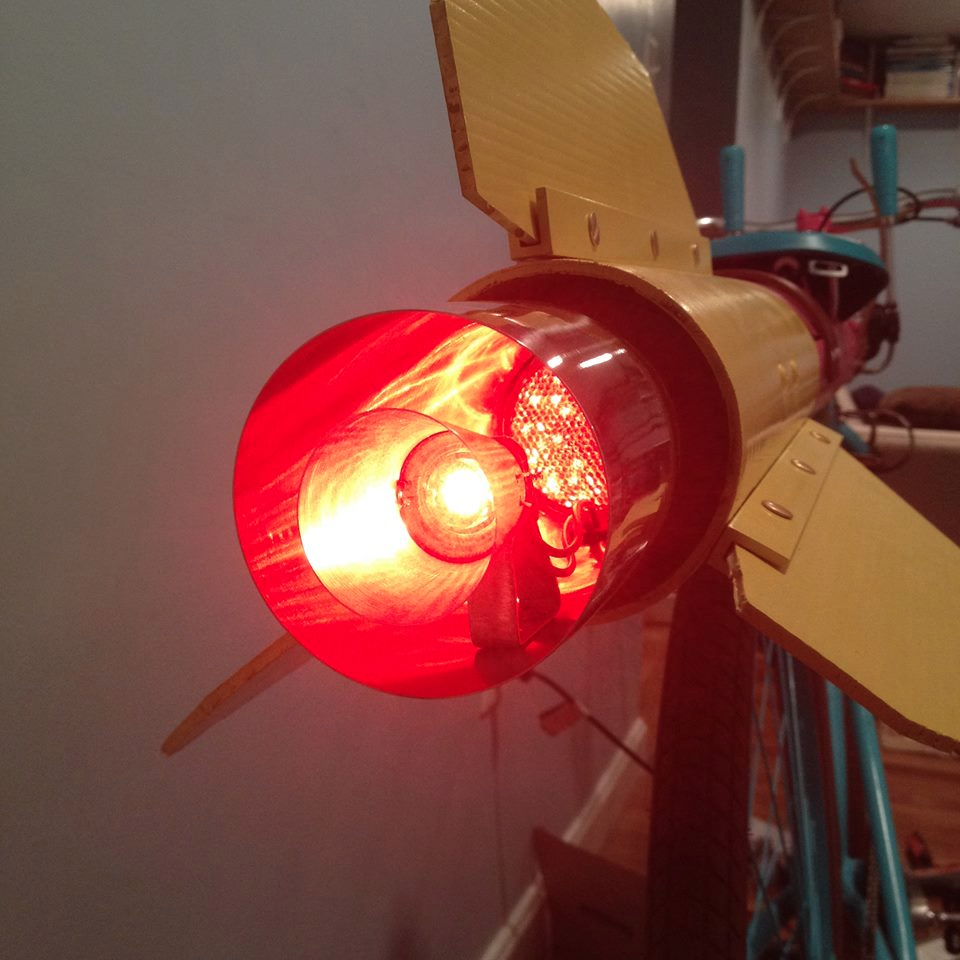 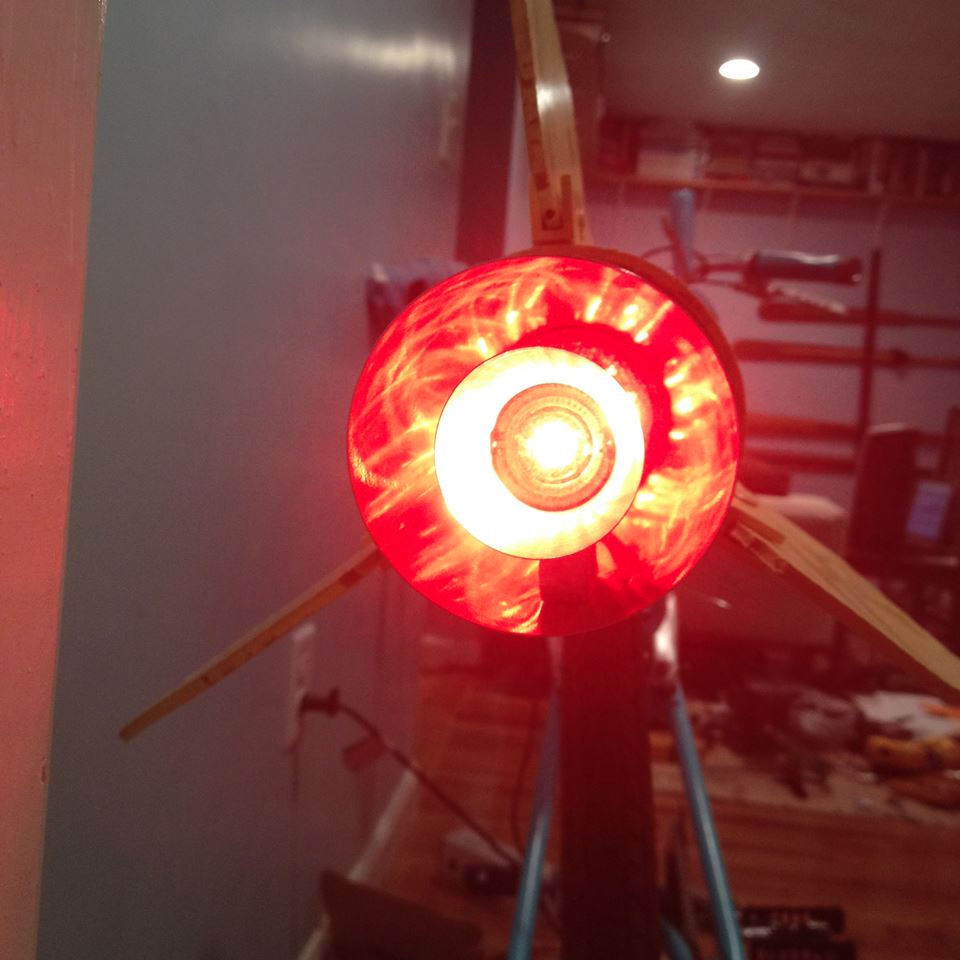 Did a burn-in on the lights and the 30W headlight ran for almost exactly 3.5 hours, which exceeds the math by almost an hour and I'm not even sure it was fully charged as the charger light didn't turn green! Tail light still going on a much smaller battery pack (I forget the mAh rating now). I will finish the burn-in on that after work tomorrow. The wiring is all tidied up inside, but I still have to solder in the wires to replace the switches in the packs with my own (which is why I'm draining them down).
2012 1944 8thAF tribute -- 1912 Iver Johnson Special Racer resurrection -- 2015 2000 Iver Johnson Major Taylor -- 2017 BO Retro Rocket -- 2017 BO Interrobang -- 2019 BO Cyclops

That light is sweet! Nice work on the electrical. Even though this might be 'wire, you've all seen it', maybe those of us less 'en-lightened' would be interested in seeing how you set up your system. I'm especially interested in how you wired and what parts were used for your charging capabilities.

Fair enough. The headlight pic is posted above—it's a Mazda3 headlight mounted in the same orientation it would be in the car (so the light cutoff is at the top of the spread so as not to blind oncoming vehicles). It uses a H7 bulb, so I got one of those in LED so it wouldn't eat battery and possibly melt things, catch fire, etc (if it caught fire at the back, that would be fitting and I could quote Pee Wee, "I meant to do that", but it doesn't work with the front catching fire). With the LED, I ran it 3.5 hours yesterday and everything was cool to the touch! I then got an H7 connector, which you can see in one of the photos of the headlight assembly (it's just two wires) and butt-spliced them to some 14 gauge wire to bring them to the battery I mounted under the seat. Below, you can see the harness conduit I used to keep everything in place. It's just some plastic harness my work was tossing out. You can also see the small wires entering into the harness that will be used to switch the lights on, which are illuminated lights mounted into the tops of the shifters (I haven't done that part yet as I have to take the packs apart and solder them in place of the switches the packs use). The wires travel through the shifters and an extension spring I use as flexible raceway and into the rocket body. You can see the spring under the left shifter. I still haven't made the shifters operable yet, either, so this is a good time to take these photos as it will only get more cluttered.

The wires I used for the lights are butt-spliced into DC coax connectors that then fit into the 3-way coax that comes with the battery packs. With these, you can plug in the battery charger and leave the lights connected if, for whatever reason, you want to use them to light up the house while it charges.

The big pack is for the headlight alone, which I wanted separate to keep the current draw at a minimum with the low-priced Chinese-made li-ion pack directly under the saddle. The little pack is for the tail lights and it also has a handy USB connector for charging a phone or whatever. If necessary, I could easily swap the connectors so either pack would work whichever light was most important in event of one of the batteries dying.

You can see the tail lights lit in a post above. It's a two-piece set up with a trailer light mounted in the cocktail shaker main nozzle and a small 3/4" red LED lamp in the mixer mounted inside. The trailer light has three wires: black (-), red (+tail), blue (+brake) and I have it so that it illuminates in "brake light" brightness, leaving the red wire unused. The small LED only has two wires. They are wired in parallel with the (-) wires from each light butt-spliced to the battery (-) and the (+) wires from each light butt-spliced to the battery (+). They then all run in the same conduit to the batteries under the saddle.

The small tail light LED had short leads, so I had to extend them to get them into the body of the rocket where they could meet up with the trailer light's wires. Since the trailer light takes up the entire base of the cocktail shaker, I had to pass the small LED's wires through the outside of the cocktail shaker and through the wood "firewall" to get them into the rocket body. You can see the grommet I used to pass the wires through the shaker and the butt splices for the small LED's wires. This is all very well hidden unless you were looking for it.