Rating - 0%
0   0   0
Anybody have any insight into these two bikes? I want a cruiser style fixed speed bike with a BMX flair, I still love small jumps and going off road. I live in Florida so not a lot of trail biking. Just miss my BMX days. I guess I'm steering towards a klunker idea, not sure I want a BMX cruiser as they are smaller frames.

1. Retrospec Sully Klunker - Freewheel, which I think I would want since that is BMX style, 26" wheels. $399 Rating - 0%
0   0   0
I have three 20" BMX bikes, way too small, a 24" cruiser, two 26" cruisers, and recently got a 27" road bike with a a fixed gear in the front and 6 in the back, really cool bike. But its a large frame and I want to be able to bunny hop curbs and do some smaller jumps, etc. This would be my going into town bike to replace a cruiser, and get a little more fun out of the trip. Should I focus on a coaster or freewheel or does that not really matter. I think I need I least 22" in top tube measurement. None of these bikes will give you the measurements.

However, this is RatRodBikes, so I'd say you should build up your own! Buy an old frame and make the BMX ripper of your dreams!
Fun has no cost, only worth.
G

Last question, you two have me thinking about a BMX cruiser instead. I love the WTP Avenger, but 27.5" and 24.5" top tube that is large, and seems expensive as a starter (would rather build one). How about the Framed Twenty6er, 26" and 23.5" top tube as an entry into the space. Remember I'm in FLorida roads/grass riding, so don't need top of the line parts.

Rating - 100%
1   0   0
That Framed Twenty6er is interesting, definitely got the MX vibe you are after, and I think the geo is going to be more familiar to you than the Retrospec or State, they're more MTB. The disk brake is a nice (but not exactly necessary) touch
Fun has no cost, only worth.
J

MattiThundrrr said:
However, this is RatRodBikes, so I'd say you should build up your own! Buy an old frame and make the BMX ripper of your dreams!
Click to expand...

This
The View From My Proverbial Window

Rating - 100%
21   0   0
Normally I would suggest something with higher quality components, but used. Framed, State, Retrospec, Sun RevMX, etc all have low level components...I love my Framed 29er frame, but just about everything attached to it disintegrated, bent or broke in a short amount of time.

However, that being said...the secondary market is absolutely nuts. I casually mentioned to a guy I ran into a couple weeks back that I had a new in box SE bike we were discussing...he offered me $2500 for it immediately, before I even finished the sentence. I said no, but asked him why...he said he could easily flip it for at least $3000, perhaps $3500 or more. I paid ~$700 new just before covid .

That being said, the bikes you are looking at are a bargain in comparison...just be prepared to upgrade as parts fail. I don't see many bad reviews on the State Klunker...and some are absolutely glowing. Finding bad reviews on the Framed, Retrospec or Sun isn't that hard. Which is strange, as I suspect the Retrospec, Sun, and State may all be variations on the same frame from the same manufacturer.

I have been getting State Bicycles Spam for the last week... mostly pushing the National Park line of bikes (two versions for the Klunker, Yellowstone and Grand Canyon...I believe). Sale prices in the $330-$350s have been tempting...but, the implementation doesn't really feel like they represent the parks.

GTM said:
Should I focus on a coaster or freewheel or does that not really matter.
Click to expand...

Freewheel rules. Easier to get on. Easier to get off. Brakes work better. Position your feet where you want. I agree with Oak Tree except I believe that a freewheeler is superior for cruising.

If you want a nimble, compact 26” bike, the first model we the people avenger is a great bike. Taiwanese made, decent frame, quality components, freewheel and a cromo fork. I bought one new but I’m 6’2 and it feels a little small for me. This is mine before I stripped it of its parts. The last photo is of a stock bike. Rating - 0%
0   0   0
I like it. Love those rims/hubs. I think I'm down to the Sully and now leaning towards a 27.5" Framed. After being on this site I want to convert an old Trek mountain bike frame into a single speed cruiser type. great ideas on here. 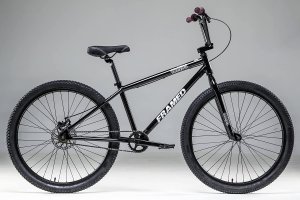 With $12,000 e-MTBs on the market, we asked ourselves, "what is the minimum you need in a bike to have fun?"... This is a wild ride, presented by Cjell Moné's writing and Joshua Weinberg's vision. Enjoy! Swipe, BMX video, swipe, oh, nice curved top tube, super-sharp photo of a gorgeous frame...

Re-newed from Nor Cal

Can I put a Crust Clydesdale fork on my Murray Klunker.