This will be my first bike build off entry and the second bike I've ever built from parts. I will be building a stretch lowrider bike from pieces and parts of old mountain bikes I saved from the dump. Since I have a real distain four mountain bikes destroying a few of them or this purpose will be real fun! Once I'm done with it I'll be donating it to my church, they are doing a fundraiser for a school to be built in the Republic of Congo. This is the reason I'm calling it the "Congo Jammer."
I will upload pics tomorrow after I've taken a few of all the parts. Best of luck to everyone!

Wohoo!! If it's anything like your first 'chopper' bike, the Congo Jammer will be very cool.
I'm not a hoarder, I'm a collector of fine junk.

Bike Bum said:
Wohoo!! If it's anything like your first 'chopper' bike, the Congo Jammer will be very cool.
Click to expand...

Thanks Mr. Bum! a real compliment coming from you!

If it can rust let it

I drug everything out into the daylight and here's how it breaks down:
One ladies Next mountain bike frame. I stripped it clean cause it looked as though it'd been left in a mud hole the day after it's maiden voyage. I picked it from a few being thrown away. 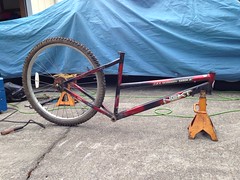 Next, another mountain tripe, this one a gents version and I also picked from a destiny with the dump. If you look close at the shot you'll notice the previous owner apparently rode this bike it's entire life never having a clue the forks were backwards. The form of the down tubes I could almost understand the average person not noticing but the lettering on the shocks was even backwards and illegible...man, people are oblivious! 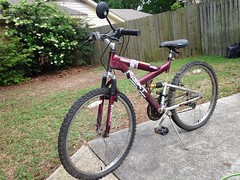 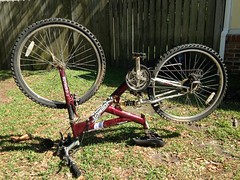 I like this shot, kinda Zombie like...disembodied and emerging from the tree. Or, perhaps it's hiding from me and my hacksaw. 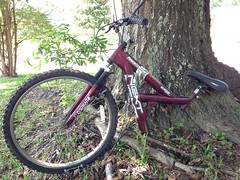 Yep, probably hiding cause it knew this was coming. So here's the parts I'm working with and I was pretty psyched for the next step of mocking up and measuring. 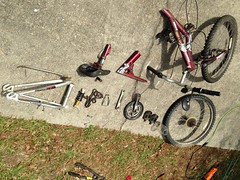 So here was the first go-round of mock-up and measuring... 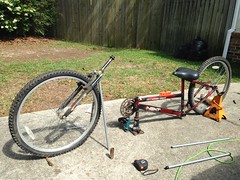 and here's the second with the front off the 2nd donor bike. I still need to figure some symmetry out so all my lines aren't at different degrees and messing with the flow of the others but it's starting to make sense in my head and I'm getting a vision already of what I want it to look like. 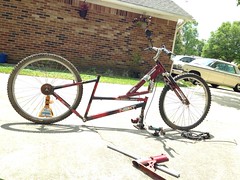 That is one crazy looking build... can't wait to see where it goes...
Slammed Trike, Ratted out Huffy, Puch Bobber, The MegaPixieRay and my other builds

You sure don't muck around! Very cool build and anything that gets some cheap and nasty mountain bikes off the road has my vote already!

Thanks Luke and Draco. And right on Luke.... I figure anything I do to an Wally World mountain tripe is an improvement.

Snuck in a few hours for more mocking around fun... 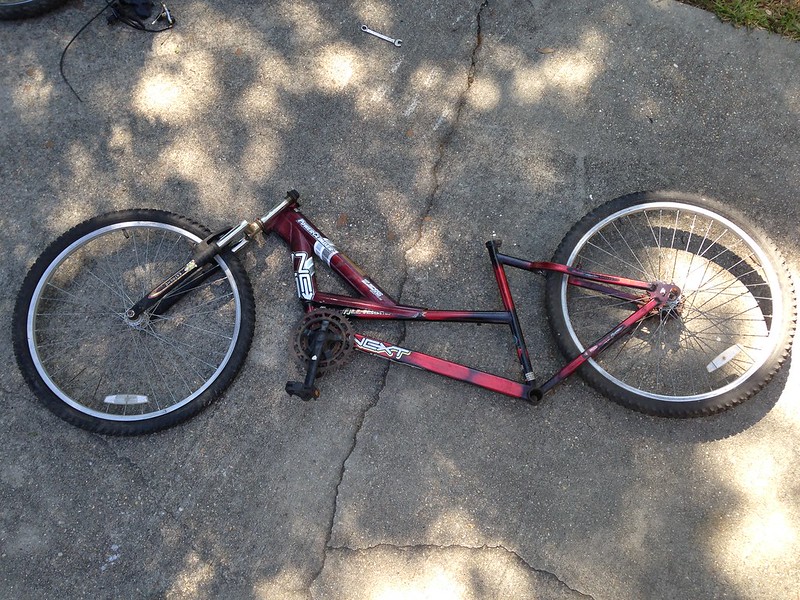 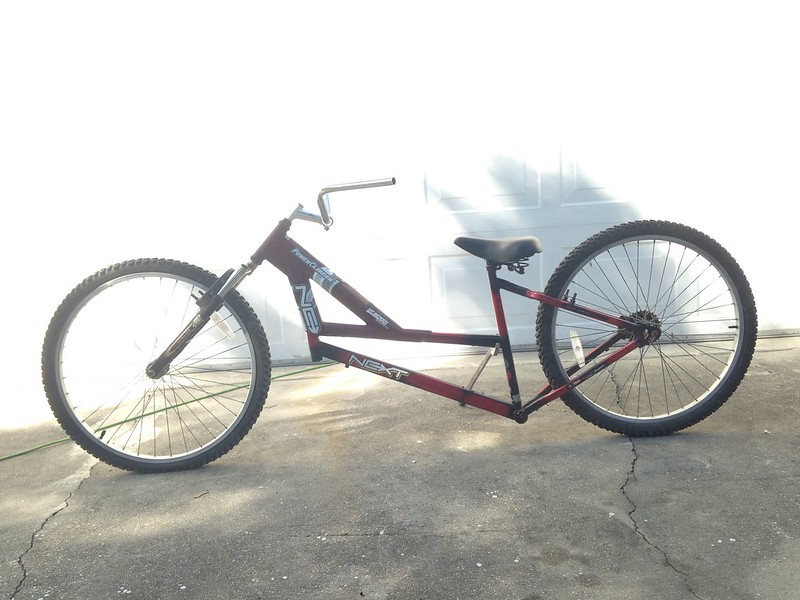 Tacked, stacked and upright...calling it a night. 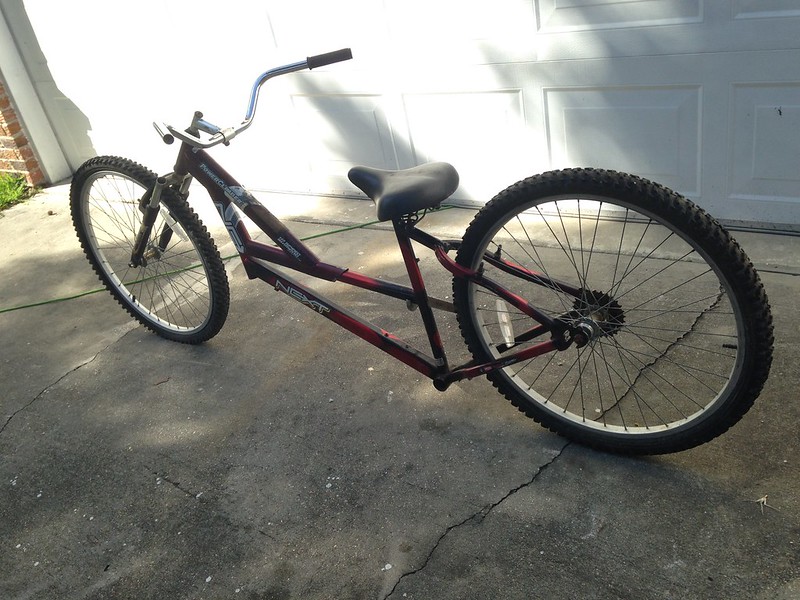 Man, that's pretty crazy. Where at the pedals going to be?
I'm not a hoarder, I'm a collector of fine junk.

Bike Bum said:
Man, that's pretty crazy. Where at the pedals going to be?
Click to expand...

Certainly cannot be confused with a mountain bike now! Putting the crank where the frame joins in the front.

That sure aint no cheapy mountain bike now!

Build a bike for a kid the smile they give you is priceless.

Ladies and gentlemen... we officially have a burrito in the build off!!
Alchemist Custom Bicycles: http://www.facebook.com/AlchemyCustomBicycles
@alchemistcustombicycles on Instagram and YouTube

deven_science said:
Ladies and gentlemen... we officially have a burrito in the build off!!
Click to expand...

Ok, it's late...but I had to throw some pics of another mock-up I've been playing with... 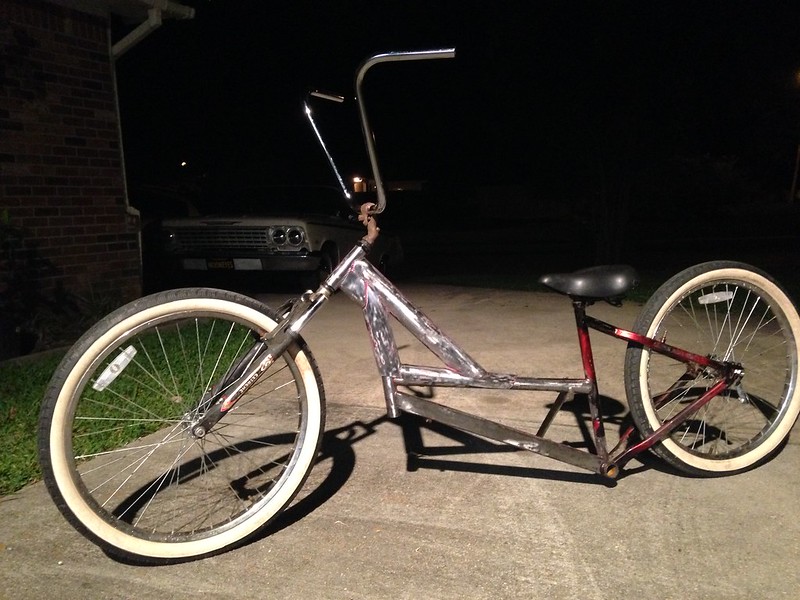 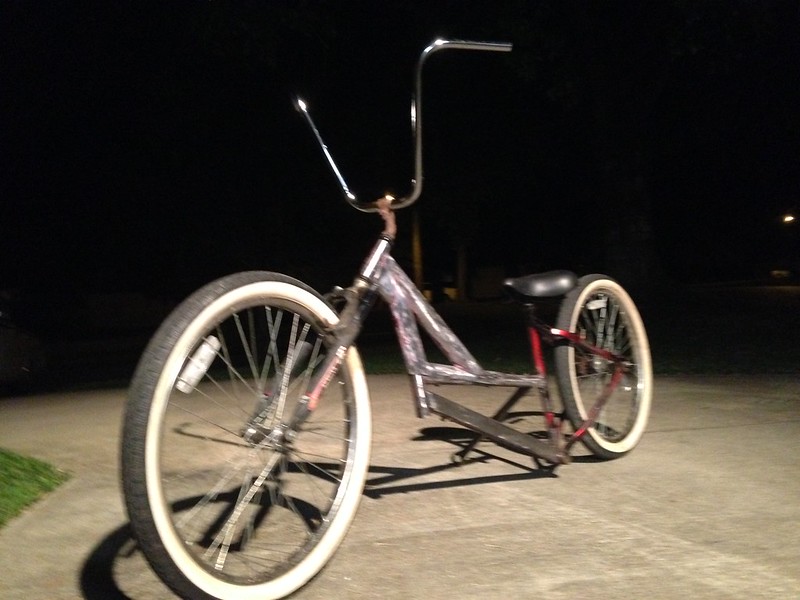 deven_science said:
Ladies and gentlemen... we officially have a burrito in the build off!!
Click to expand...

ha ha deven...I've been known to make a slammed burrito 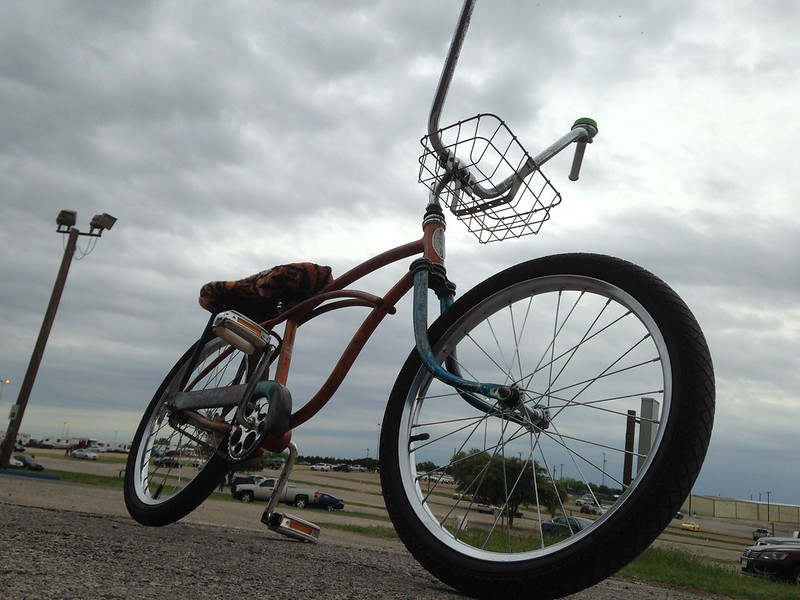 ..but this ones getting raffled off for a cause when I'm done so I think I better tame it down. I'm putting the cranks up front with plenty of clearance and comfort. Thinking about a double chain drive though, down to the original position then back to the hub.
Share:
Facebook Twitter Reddit Pinterest Tumblr WhatsApp Email Share Link