Here's a brief explanation of my ebike shenanigans:

My first ebike kit was salvaged from a yard sale. Took me a week to figure out that someone had the black wire as live and red as neutral (Canadian???) and repair the controller. Put all the components on a 1950 Schwinn DX style frame (called her the Nifty '50). It was a 350w front wheel setup at 36v running three 12v 12ah SLA's in series. After a year I finally got courage and started buying more ebike stuff. Picked up two Golden Motor Magic Pie Version 1 hubs. Built up a 1960's Raleigh Sports frame around the rear hub. Eventually put everything on a slightly older Sports frame. Power was 500w run at 36v nominal using my first li-ion pack from em3ev (36v 20ah). That bike taught me a bunch about electronics. Ran a SA dynohub for the front lights! Put about 2500 miles on that guy, but now I want more, way more! Friend of mine gave me a late 30's Snyder Fastback frame badged as an Overland! Bugged the heck out of him for months before he finally sold it to me. He told me that the deal I got was contingent on me turning this thing into a cool electric bicycle. The plan kept morphing and eating at my brain. I was determined from the very beginning to make a nimble ebike that is reliable and confuses the crud out of people who think it isn't an ebike. MP(V1): Removed the original internal controller out and will run statorade and hubsinks to compensate for the higher power demands (about 2000w of continuous power)

Battery: 52v 23ah from EM3ev with continuous current rating at about 37 amps.

Brakes: 90mm Sturmey archer up front with 180mm disc in the rear. I will also be running regen so torque arms will be a huge must! Both brake levers will run cut-offs to activate those.

Frame mods: I will being adding a disc brake mount to the rear dropout area, but I really hate modifying older frames. Wanted to run something less invasive, but safe comes first!

General electronic mods: Going to run 10 awg (teflon wire maybe??) wire from directly outside the hub to the controller for the phases. I am working to make sure the phase wires don't have to travel far as to limit the thermal stresses on transmitting current. Will locate the controller either under a rear rack or between the rear fender and the seat post tube area.

That's pretty much it for now. Hope you guys like it. I will be posting more pictures as the style and the system evolve as time goes on. Hope to see more ratty builds with hub motors in the future!

PeteMcP said:
Your e-Snyder is so cool. A real wolf in sheep's clothing. Fork and chainguard add even more coolness!
Click to expand...

Thanks PeteMcP! The fork is actually half original Monark (girls fork) and half Sears Spaceliner. I have been trying different configurations so it has good travel and will work with a drum brake.


I think the chain guard is why I decided to build this frame specifically. Can't wait to put a chain ring with it.

Rating - 0%
0   0   0
So I have been mostly playing around with a bunch of parts my buddy gave me. Come to think of it, most of the parts on this bike either came directly from this friend of mine or I wouldn't have bought without this buddy in one way or another. Anywho, those Columbia fenders really look great in person. They have nice red highlights between the white pinstripes and the blue. It ties back into the frame color well!

The seat is a Persons Majestic Co saddle It's from my home town of Worcester Massachusetts! Oh, and it's one of the few parts I got myself, haha! Might actually invest in having it upholstered. Who knows yet!

The tank is actually a girl's Schwinn Hornet tank. After a bit of pounding away at these they sorta look like they belong on this frame....okay maybe not that good. Girl's bike parts deserve more love, though, right??? The springer legs of the fork are also girl's (Monark). In the next couple of days I should have a rear fender light shroud made up. If that goes well I'll actually share my process of how I made it. Also, the more I play with this bike the more I am inspired by Steve McQueen's 1927 Indian Big Chief a tad bit. I don't want people to come up to me when I ride and ask me if it is supposed to be and Indian, but it totally does inspire some of my thinking here Needless to say, I might actually be changing headlight to get more of a pre-war motorcycle look. P.S.: I am totally kicking myself for not using this as a build-off bike. Didn't remember that they started at this time of year and I probably won't have it done by that deadline anyway anyhow!

Rating - 0%
0   0   0
Nice additions.
Seat upholstery? Nah. Leave it ratty.
Said before I love that chain guard, but it would blend in with the rest of the bike's patina if you daubed some matching paint on it. Headlight too for that matter.
Are you planning on adding a leaf spring to the forks, ala Indian?
Carry on.

PeteMcP said:
Nice additions.
Seat upholstery? Nah. Leave it ratty.
Said before I love that chain guard, but it would blend in with the rest of the bike's patina if you daubed some matching paint on it. Headlight too for that matter.
Are you planning on adding a leaf spring to the forks, ala Indian?
Carry on.
Click to expand...

Yeah PeteMcP, I think I might mess around with putting a fake leaf spring on. That way I can use the spaceliner spring mouting bits I have left. That will be tried out a bit later though. If I do that, I will have to figure out how I will mount the fender and the "leaf spring" so that the front springer arm doesn't mess anything up.

I think I will keep the seat the way it is because it is cool and because restoring it would be a pain. The chain guard will eventually get patina matched to the frame. If anybody has specific suggestions or paint combos for the chain guard feel free to shout them out!

As for the headlight, I may stick to the first setup but I am starting to like this one too. Another puzzle I need figure out is mounting the brake arm to the fork so that it doesn't impede the proper movement of the fork.

Rating - 0%
0   0   0
Vintage bikes with modern electric motor kits are so cool.
- here is how I mounted the brake arm on my rat trap fork. (You have to zoom in). I strapped the brake arm to the front part of the fork. 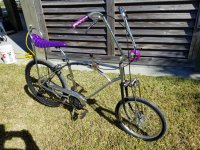 "My favorite childhood memory is Having Energy" - Libby Harper

wheelbender6 said:
Vintage bikes with modern electric motor kits are so cool.
- here is how I mounted the brake arm on my rat trap fork. (You have to zoom in). I strapped the brake arm to the front part of the fork.
View attachment 120279
Click to expand...

I kept looking at this as I continued to over-think the pivot dynamics on my setup. After a while I pretty much copied what you did, except mine is strapped to the rear section of my fork (which is also part of a rat trap springer, coincidentally)

Rating - 0%
0   0   0
So it's been a while and a bunch has happened as far as this build goes. The original controller I intended for this build had some issues, but I will try to salvage that. In the meantime, I have been running a voilamart 48v 1000w controller. I'm assuming I am producing about 1200w at 52v nominal. For now that is more than enough for the brakes I have. I also completed my headlight conversion of an old 6v sealed beam light to LED which I'm running off my front dynohub

As for ascetics go, I made up another mount for the larger headlight and cut up an old chrome fender I had to make a visor. I also decided on using a Evans Colson Sonic Scout tank I have, but I swear it isn't going to stay on this bike. It will go back on its original home once I make or find a better tank for this build. Additionally I found an old Worcester license plate, Persons Majestic siren and reupholstered the Persons saddle (I bet you can see a theme here, right?). Oh! And I have the siren operated by a third brake lever.

So the whole bike rides far better than it looks. I did a couple of bigger rides already including a ride down to Worcester, Mass. That was a 38 mile ride that took me 3.5 hours from where I am living currently in northern Massachusetts.

I actually took it mostly all apart today to rub in some boiled linseed oil, but those pictures will come soon I promise! For now here is me with my bike in all its ratty glory. Rating - 0%
0   0   0
This is a good looking rat rod no doubt. Are you carrying your battery in a backpack or is it mounted somewhere on the bike. Got to thinking about your tank situation. Maybe a tank that houses your batteries if you are not already doing that. This bike in its current state rather defines rat rod. Good job.