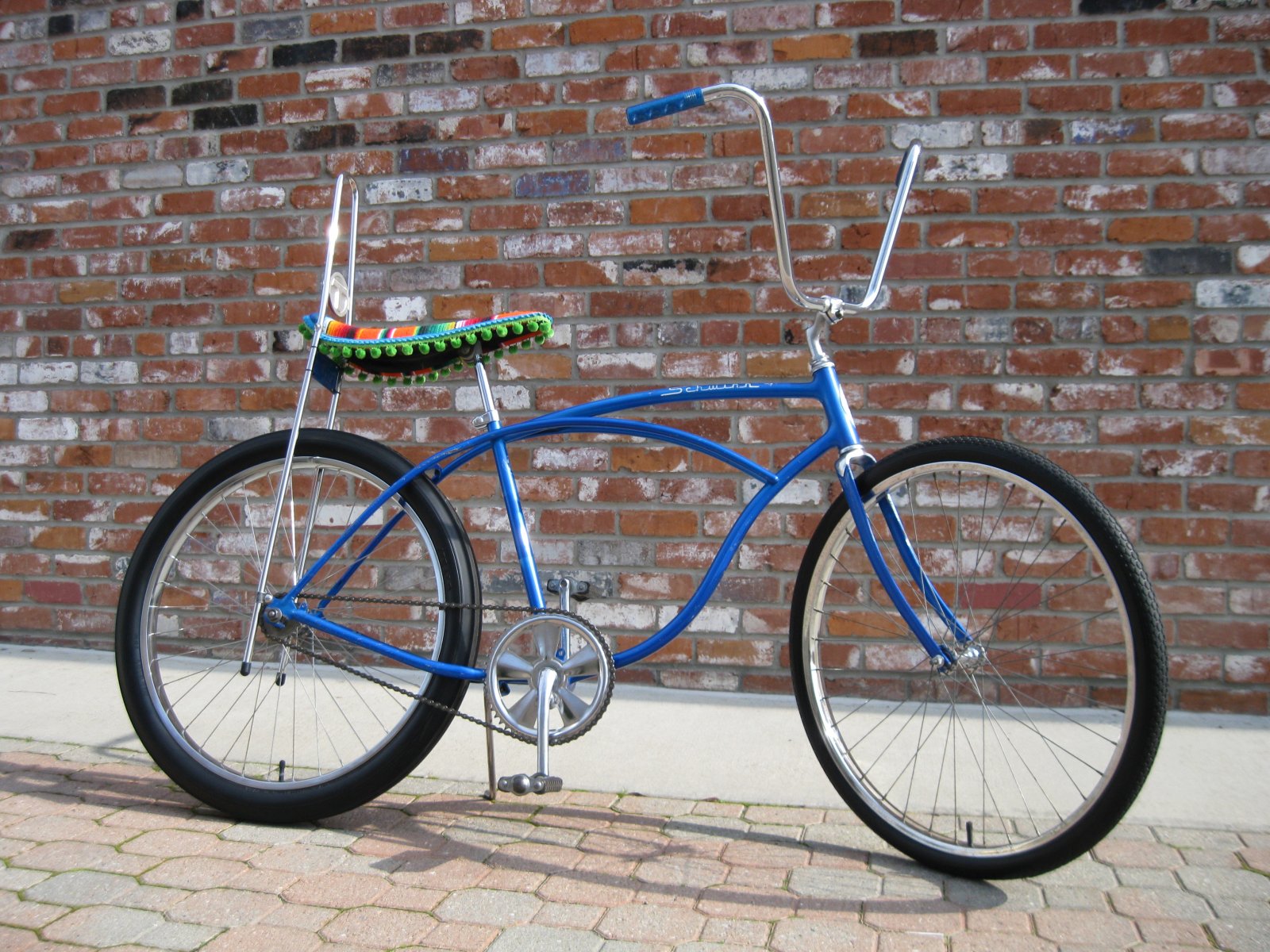 The story you are about to read is true*. The names have been changed to protect the innocent.......

The year was 1964.......LBJ was in the White House, The Beatles were tearing up the charts and Ford's new Mustang was the hottest thing on four wheels. None of that meant jack squat to little Timmy Patterson. His eight year old mind could only focus on one thing.......obtaining one of those swell, new Schwinn Sting-rays from Mr. Hobart's bicycle shop. Each day after school Timmy would rush down Main St. and peer through the big bay window hoping that the Sting-ray he loved most would still be there. Day after day the routine had been the same but this day was different. Timmy took a different route home and arrived just in time to sit down on the porch and see his big brother Darrell coming around the corner. Like most little brothers, Timmy looked up to Darrell who was a freshman at the local high school, the star Jr. Varsity first baseman and had a paper route in the mornings.................Darrell was a busy guy. Darrell's bicycle that he used on his paper route had been borrowed and the owner was moving soon.........besides, it was a girls model. Darrell had taken quite a ribbing from some of the fellas about riding a girls bike around town and he was finally in a position to do something about it. He had been saving his paper route money as well as any other cash he could scrape together by doing odd jobs around town. Today was the day he had been planning for weeks...............he was going to Mr. Hobart's bicycle shop after school to buy a new Schwinn and he promised Timmy he could tag along. It had never occurred to Timmy to ask what color, or model for that matter, Schwinn Darrell had planned to buy...........Timmy had his favorite and assumed Darrell's favorite would be the same. You know what they say about assumptions............needless to say, Timmy was heartbroken when he saw the model Darrell had chosen. Darrell was a practical young man, the polar opposite of young Timmy who would blow each and every cent he could muster up on candy, soda pop and comic books. Timmy was so disheartened by his brothers choice that he quietly slipped out of Mr Hobart's bicycle shop and walked home all alone. That evening while Darrell proudly displayed his brand new blue Schwinn American, little Timmy sulked in his bedroom gnashing his teeth in disgust that Darrell would foolishly waste his hard earned cash on a bicycle clearly built strictly for squares. Years went by...............Darrell graduated from high school and had long since left his paper route behind for a job at Chico's Burger Hut........complete with a lily-white uniform, black bow-tie and paper hat. By this time Timmy was twelve and mortified at the goofball square his brother had become, all the cool kids around town had way-out bikes like Sting-rays, Wildcats, Screamers and Rails. Timmy now had a job of his own.........shoveling cow flop at Old-Man Roberts farm.........all the while dreaming of candy painted Hot Rods and motorcycles. Timmy's new job didn't pay much but at least he didn't have to wear a paper hat to do it. By now the war in Vietnam was in full swing and Darrell had been drafted........the whole family was on edge and even Timmy was worried about his big brother though their relationship had never been the same since that day at Mr. Hobart's bicycle shop.

Nearly three years had passed and Darrell was now discharged and home from Vietnam. Darrell wasn't the same person after the war as he was before it. He drifted aimlessly for nearly a year and then, early in the Spring of 1970 seventeen year old Timmy arrived home from school one day to find a note from Darrell on his bed. Gone to Mexico.......don't know when I'll be back. The Schwinn is yours, just don't cut it up. Timmy was furious.........what an insult, not only did Darrell stick him with the one thing most responsible for ruining their relationship but he also forbade him from customizing it.

Darrell ended up South of the border performing sometimes legal and nearly always unscrupulous acts just to survive. Then one night while drunk as a monkey he passed out in a back alley. The next morning he was awoken by the owner of the building, offered a bowl of menudo and a shot of tequila. After sobering up he staggered into the dimly lit shop and was offered a job sweeping up with the promise he would be taught a trade. Darrell took to this new venture like a duck to water and Pepe Horchata's Upholstery & Chrome flourished.

Forty long years had passed and Darrell, not a young man anymore decided it was time to finally head North once again to visit the old homestead. Years before he had taken over the upholstery business when his friend and boss Pepe Horchata had passed away at the ripe old age of 96.

One day there was a knock on Timmy's (err.....at this point it was Tim) door. After forty years without so much as a phone call, postcard or smoke signal there, standing on Timmy's (it's Tim!) doorstep was his big brother Darrell. All the emotions of the past forty years came flooding back to Timmy (Tim, you moron). His Father dying of a heart attack just a couple years after Darrell had left, his Mother fifteen years later of a broken heart........never knowing what happened to her first born son, and him having to go through it all alone. Forty years hadn't done much to quell Timmy's (it's Tim A-hole!) anger and after giving Darrell the stink eye for a couple of seconds he punched his big brother square in the nose. When Darrell came to Timmy (it's Tim! T.I.M.) was standing over him with Darrell's old Schwinn at his side. Not long after Darrell had left Timmy (really?!?! TIM!!!) had stripped it of all the unnecessary parts, added some medium rise handlebars and a banana seat and as the ultimate thumb in the eye of his brother had it covered with a Mexican blanket. Darrell was less than pleased at what had become of his prized Schwinn.......he stepped off the porch and walked away never to be seen again.

Not long afterwards the Schwinn was stolen and then Tim disappeared...........rumors ran wild in town that Darrell had swiped it and returned to Mexico to live out his remaining days restoring his beloved bicycle. I've attempted to recreate the bike the best I could using just a faded old photograph and hazy memories of a few local senior citizens...............hopefully Timmy would be proud. 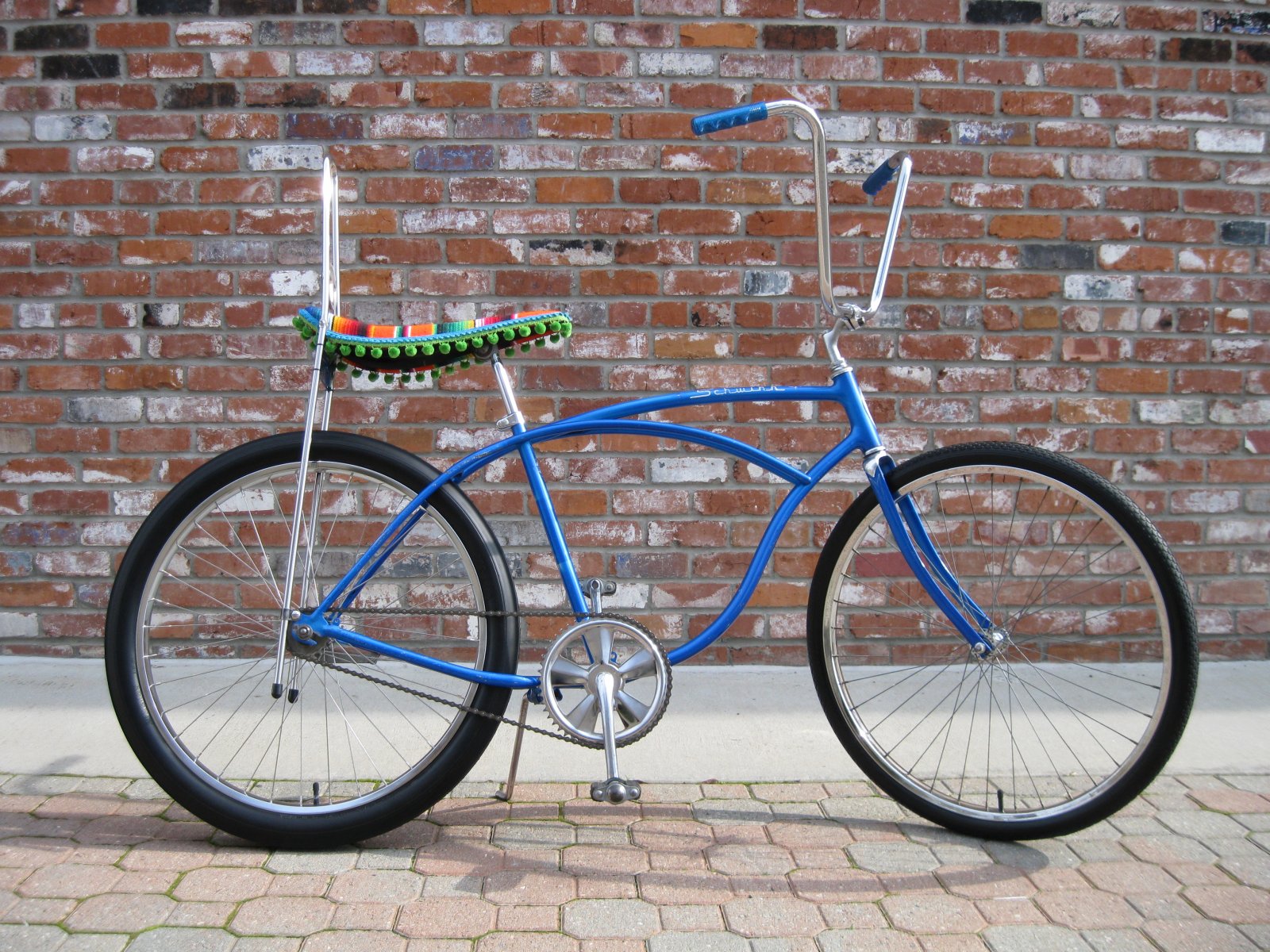 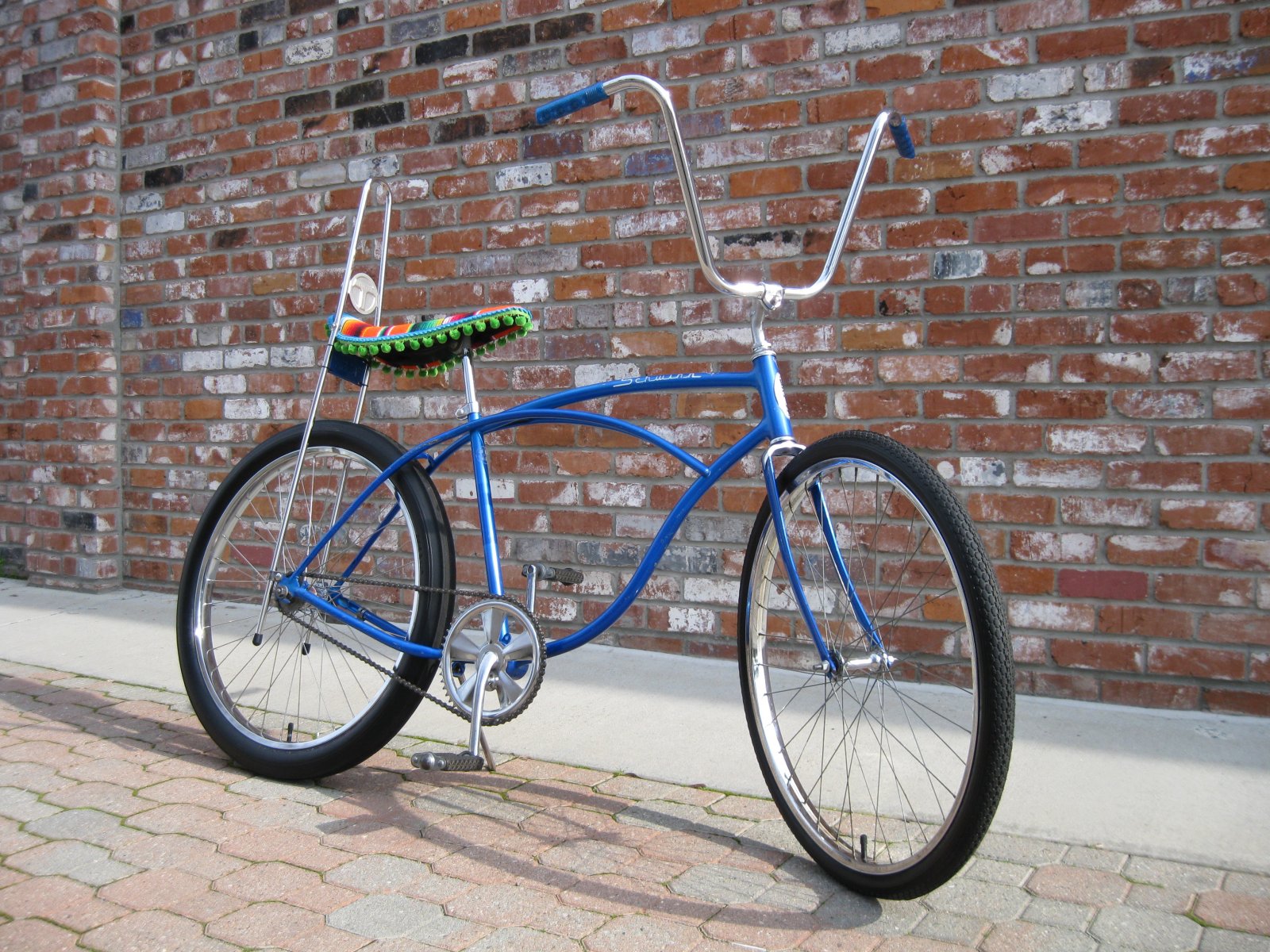 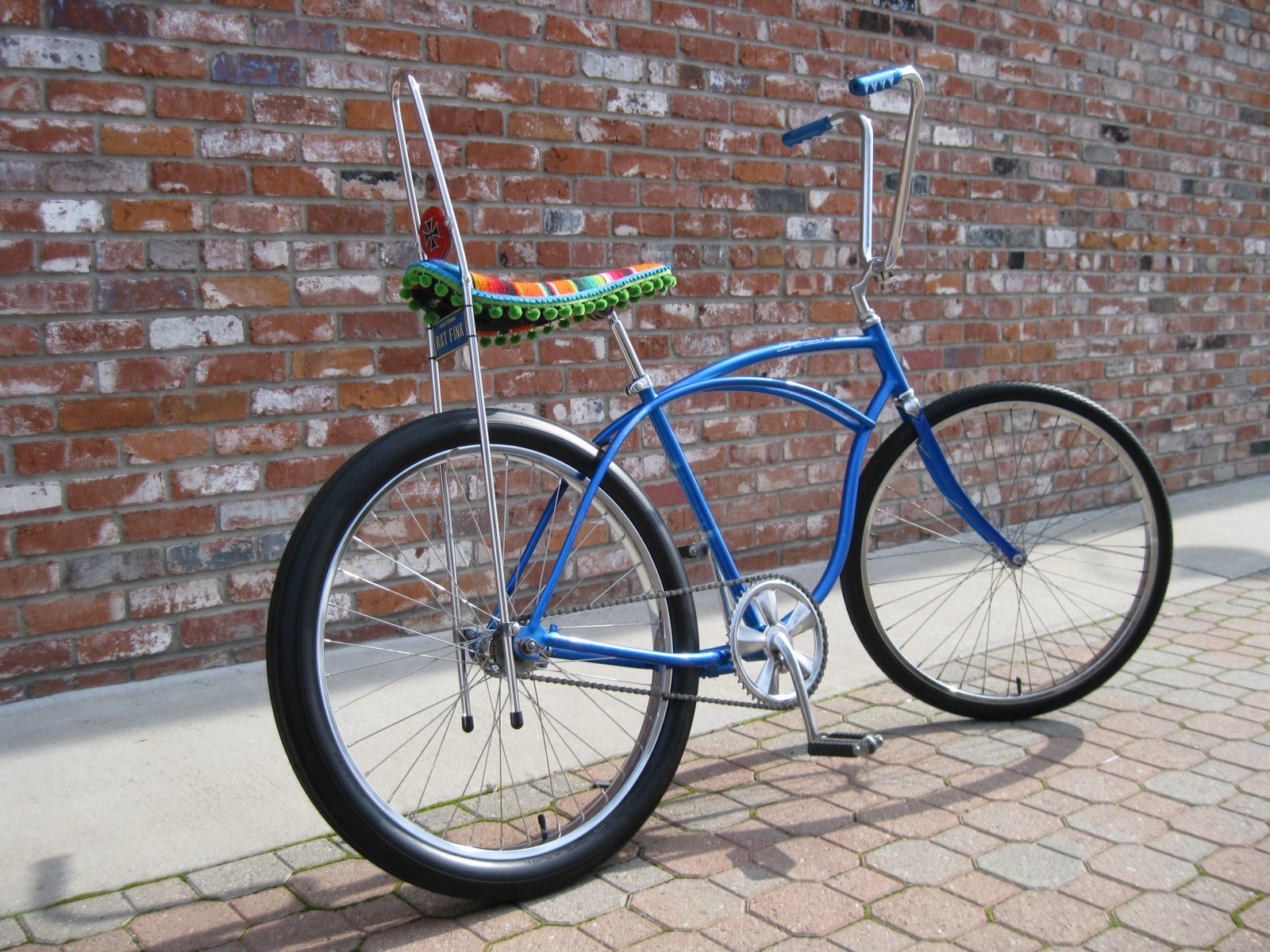 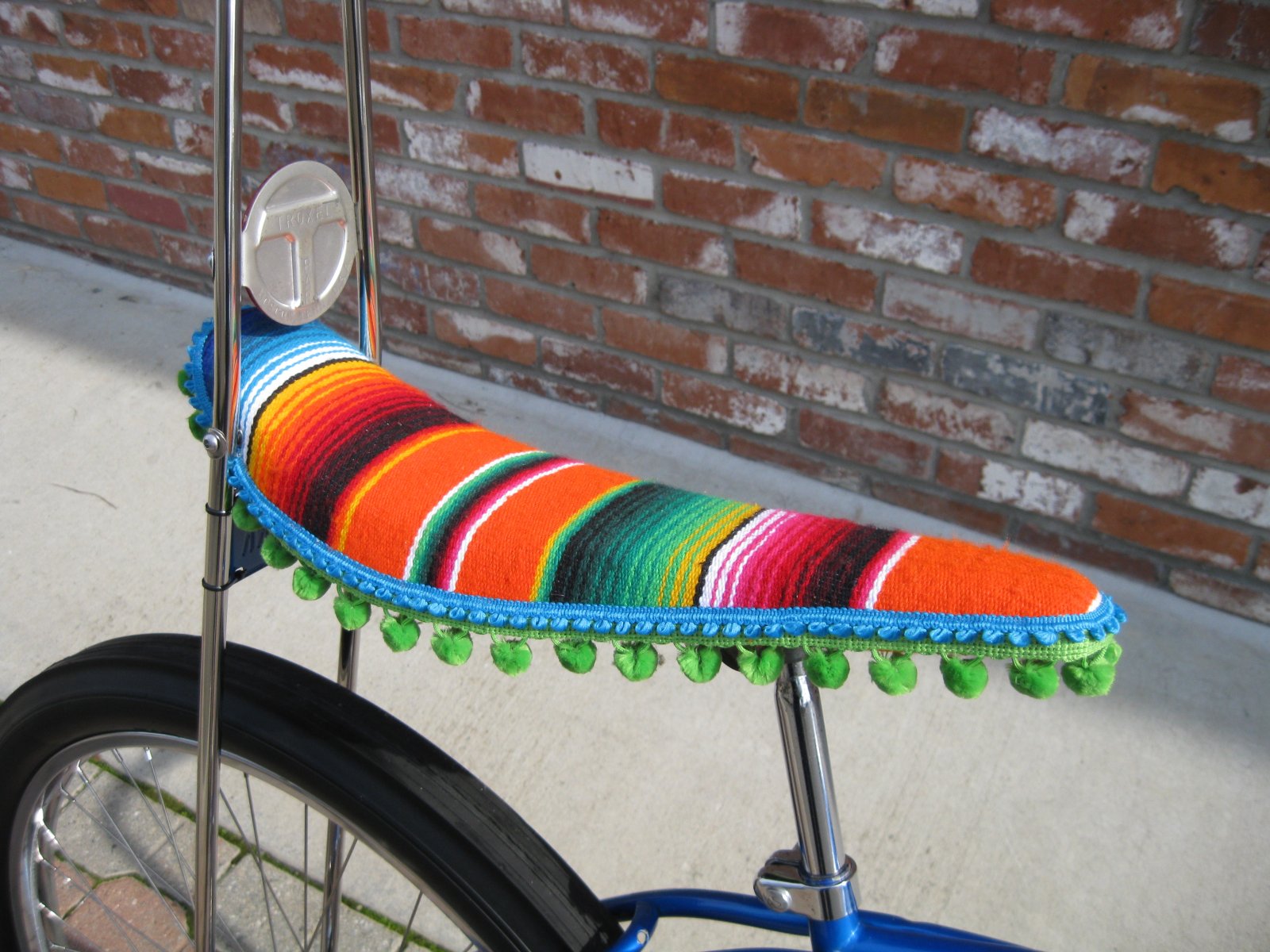 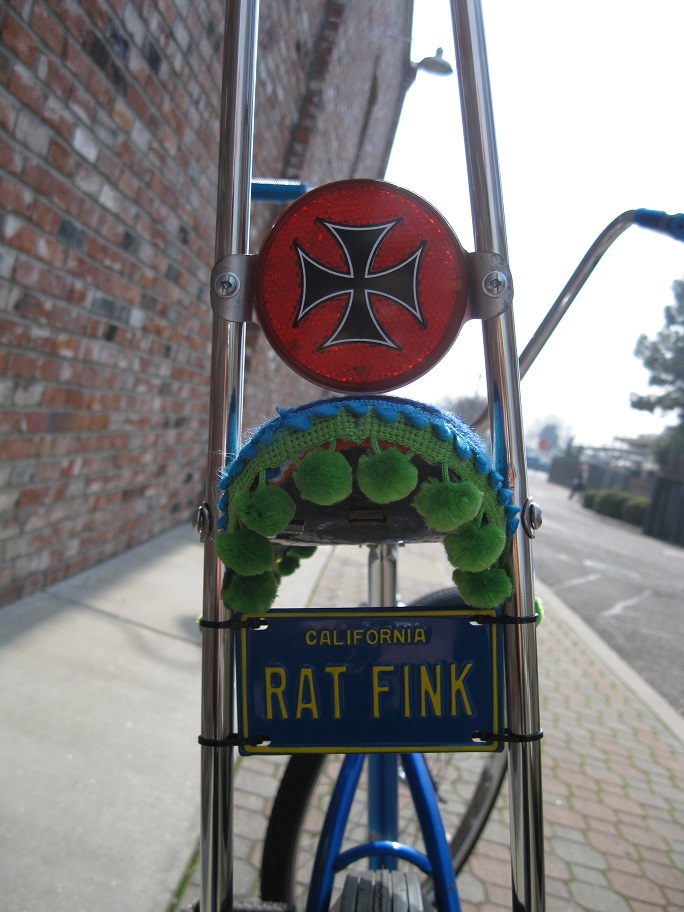 Great story! That seat is KILLER!
--rick (one of the usual suspects at Retro-Ride Hagerstown)

Excellent!
See at at Bikes at the Ballfield. Details in events section.

Great bike, the story needs a comic book drawn around it!
MY INTRO AND BUILD LINKS/"HOW-TO" LINKS:
https://www.ratrodbikes.com/forum/index.php?threads/lukethejokers-intro-and-links-big-moves.65513/​

Blue Schwinn’s rock, and yours is no exception. Seat is awesome. Bet this bike rides nice.

furyus
Yet when I surveyed all that my hands had done, and what I had toiled to achieve, everything was meaningless, a chasing after the wind; nothing was gained under the sun. Ecclesiastes 2:11