Actually, I am not sure what it is. Back in communist times there was a company called Romet that made most of the bikes seen on the roads, and you could tell what a bike was because they would write 'Romet' and the name of the model on the bike - except for the export models as they were branded 'Universal'. All their folders were made in a factory in Kowalero.

Then there was Zenit.

The frame is a slight modification of the Romet Jubilat, but it was equipped with items from their mid-range bikes. It is badged 'Zenit', but instead of a model name it just says 'Kowalewo', the name of the factory. It was built at a time when Romet, along with the socialist system as we knew it, was sliding slowly into oblivion. Zenits today are relatively rare. 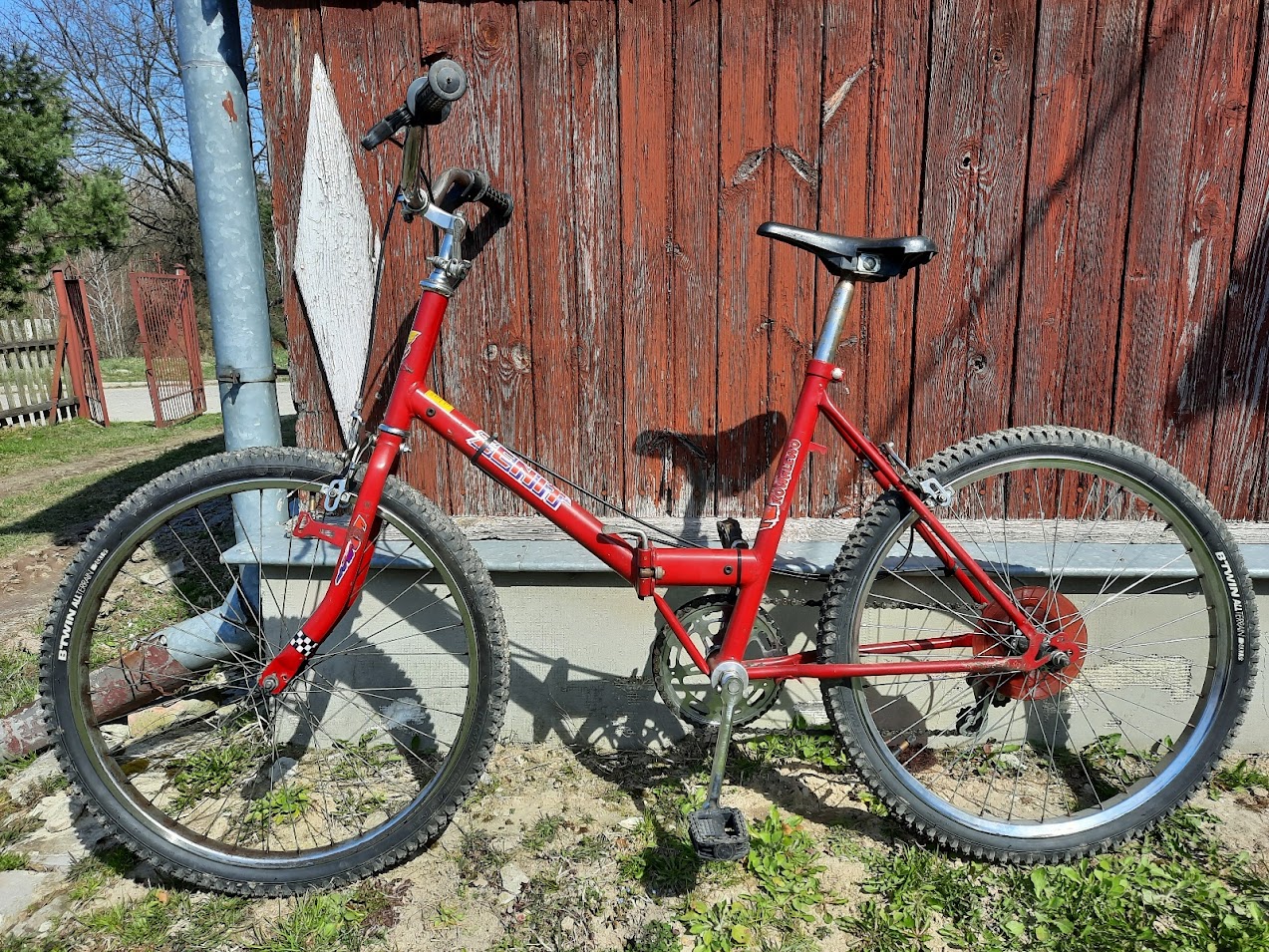 The picture above is how it looked after I had replaced the mid-rise handlebars with standard Jubilat ones, fitted a cheap saddle and some offroad tires, removed the rear rack and fenders, and put the rather nice chromed steel brake levers into my reserve stock. Below is a Romet Jubilat of roughly the same era. Note the different handlebar stem, the fact it has a rear brake, 3-piece crank instead of a 2-piece and 3-speed deraileur instead of a coaster brake. In terms of Jubilats, this was royalty. 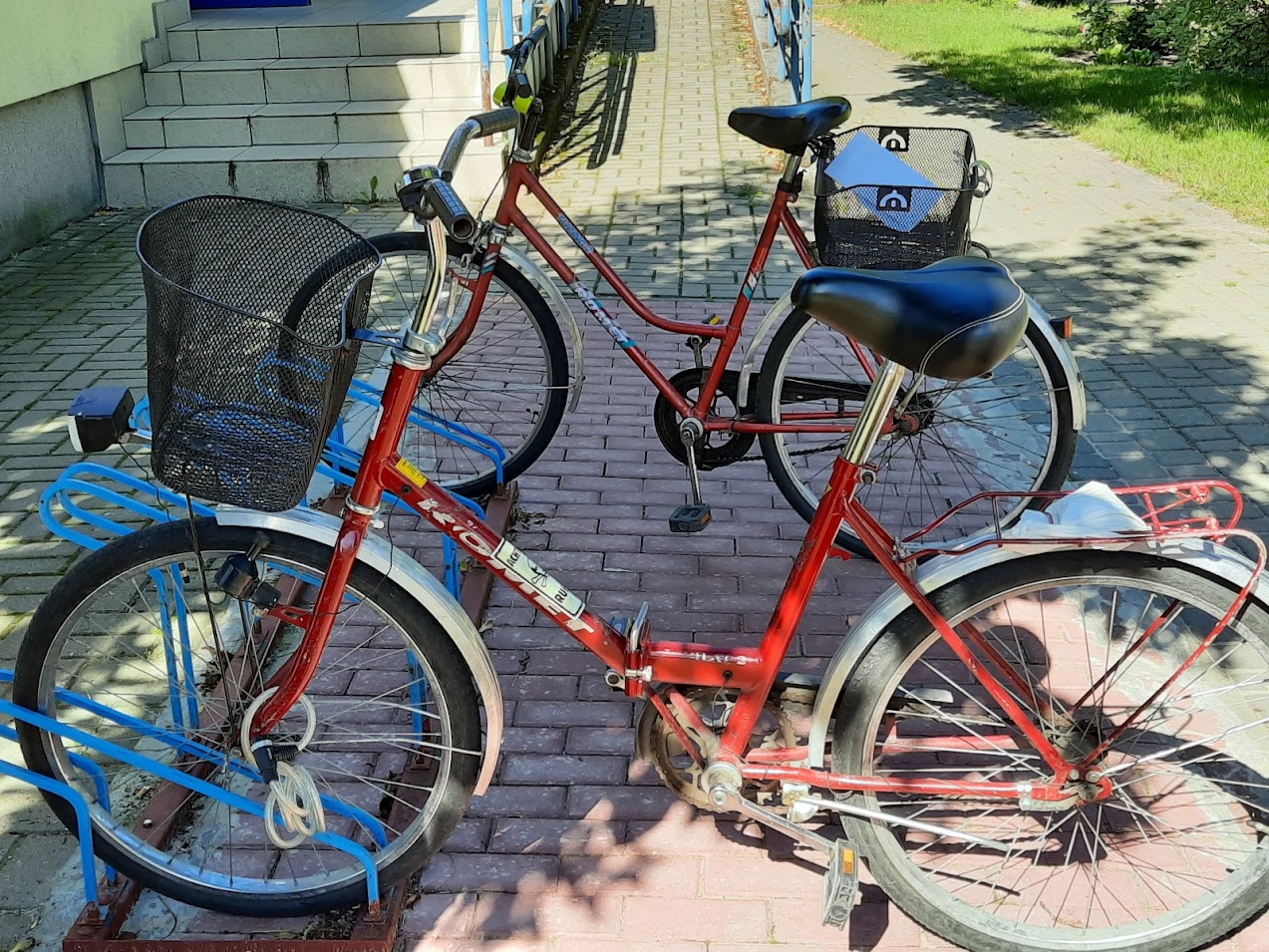 I bought it in the winter of this year, and rode it often throughout the summer as my farm bike. It was quite good, but it was clear that the frame was bent enough at the back that the tire rubbed the frame. There is quite a lot of clay where I live, the kind of stuff which is guaranteed to jam side-pull calliper brakes. I considered exchanging the 3 speed hub with a six-speed one, but the hanger did not really have the reach and then it would start to compete with my Kross offroad bike, which was not what I wanted.

I want a clean, simple bike.

The first step was to buy a cheap bike with a SRAM 3-speed coaster brake hub, eliminating the need for that rear brake and its cable. 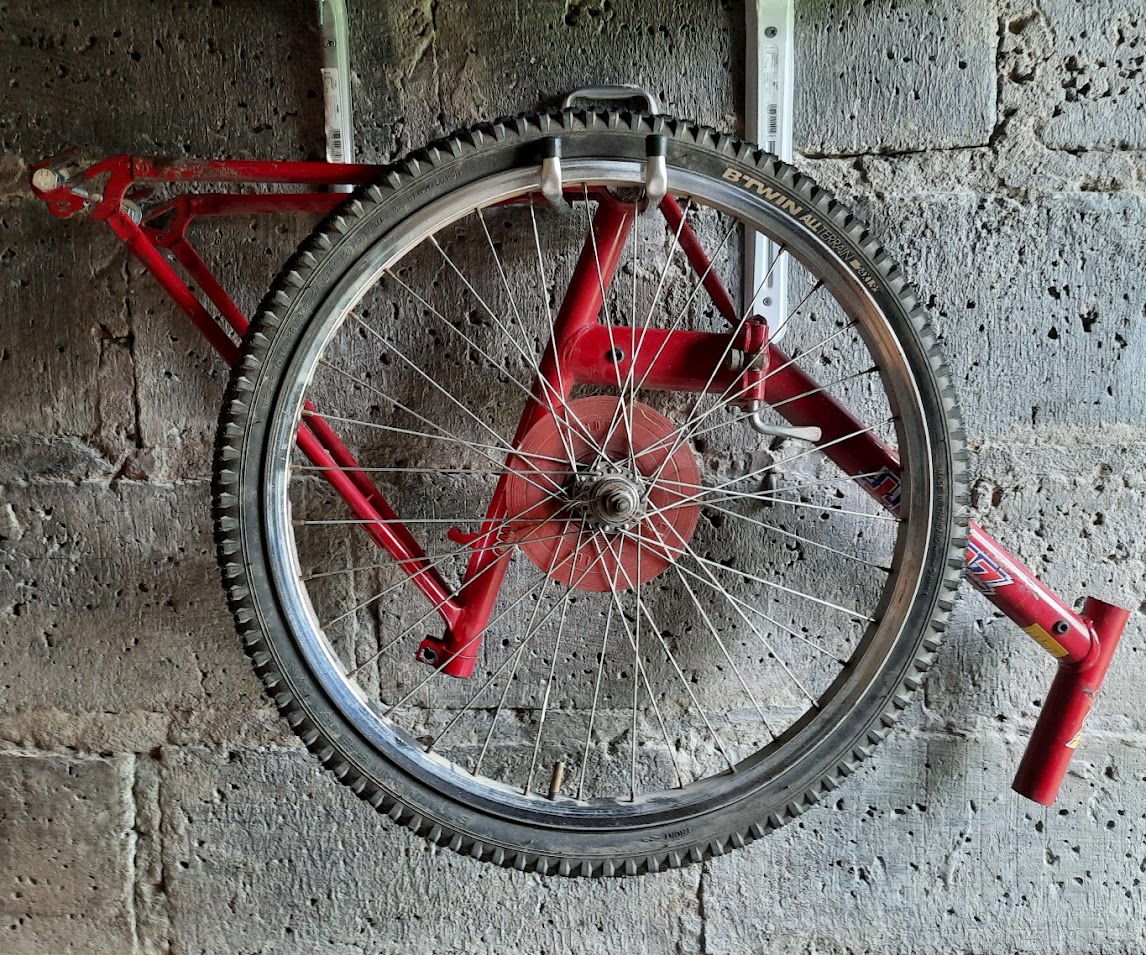 I have stripped the bike down and put all its parts in my parts stock. I forgot that I also exchanged the rear wheel rim for a deeper steel one I had lying around. This will be staying, but the front rim will be rplaced by an aluminium one I also have in stock - to save a tiny bit of weight but mostly to improve braking in the wet.

Rating - 0%
0   0   0
Oki, I would like to report that I have stripped down the rear wheel, and that the frame and two rims are now hanging on a wall hook in my garage instead of my coalshed workshop.

I also fixed the said wall hook on the wall. I wanted one to reduce the amount of stuff leaning against the wall when the car is in there as well, but then I thought no, this could be the last winter I work in the garage. Then I kicked and bought the wall hook, because anything I can screw on the wall here can be unscrewed and taken with me.

Rating - 0%
0   0   0
One more thing - I retrieved the mid-rise handlebars from one of the other Jubilats I have, and which was originally fitted to Zenit. 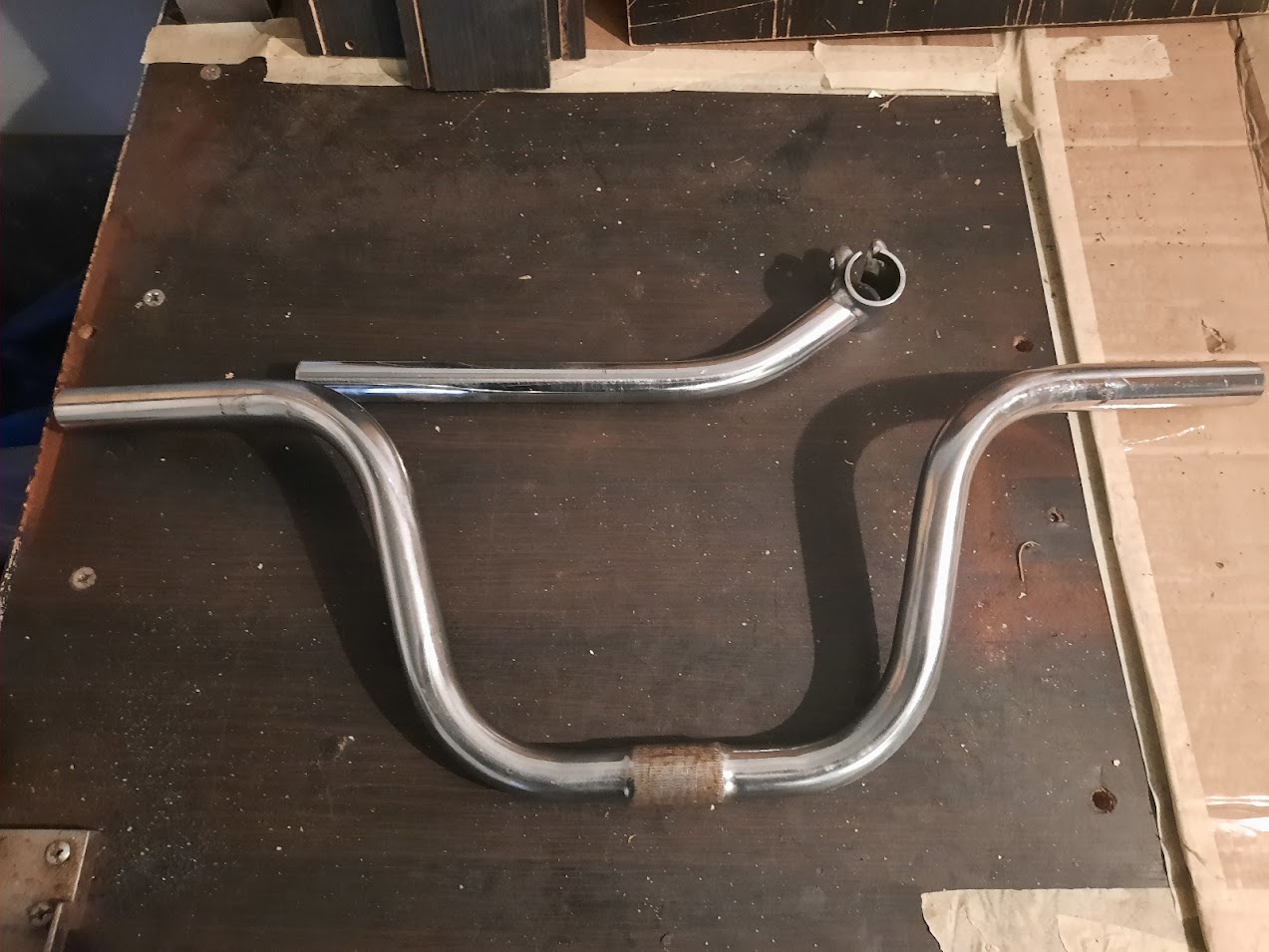 The stem came from yet another Jubilat, and I knew there was something different the first time I rode it, as it really wanted to dive into corners. Jubilats usually only have about half that bend in the stem and are quite neutral steerers. But what if... 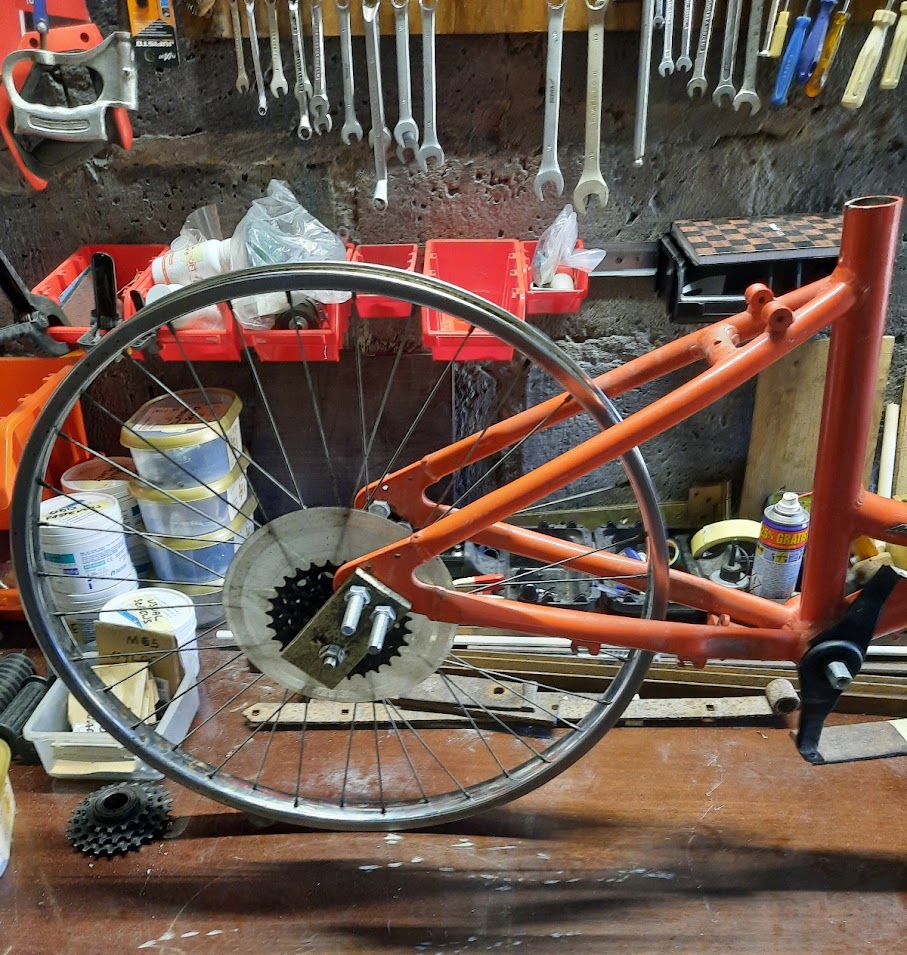 Those rear dropout extensions are temporarily bolted to my Zasada kid's bike. The extensions are for a current build-off bike, but the frame was in my garage in the city while I was making the extensions on the farm, so I needed a frame to test them. The Zasada is quite well made, in Poland, but was designed for 20" wheels. That wheel in there is a 24".

What if for a build off next year I fitted a 24" wheel, added some longer forks with the original 20" wheel, and also fitted my mid-rise bars? I would have my first ever muscle bike.