This is how I pulled it out of the barn after almost 40 years of sitting. 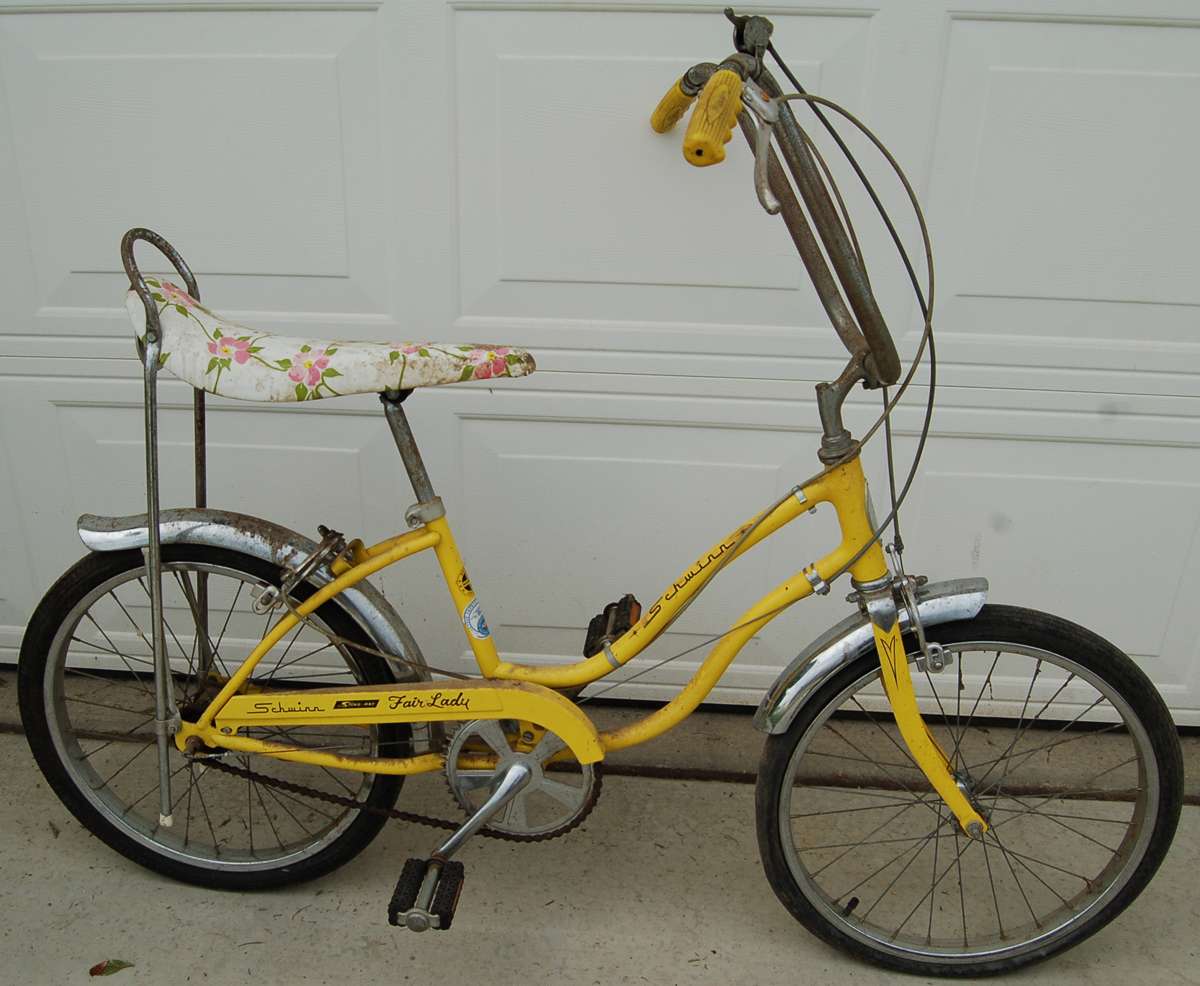 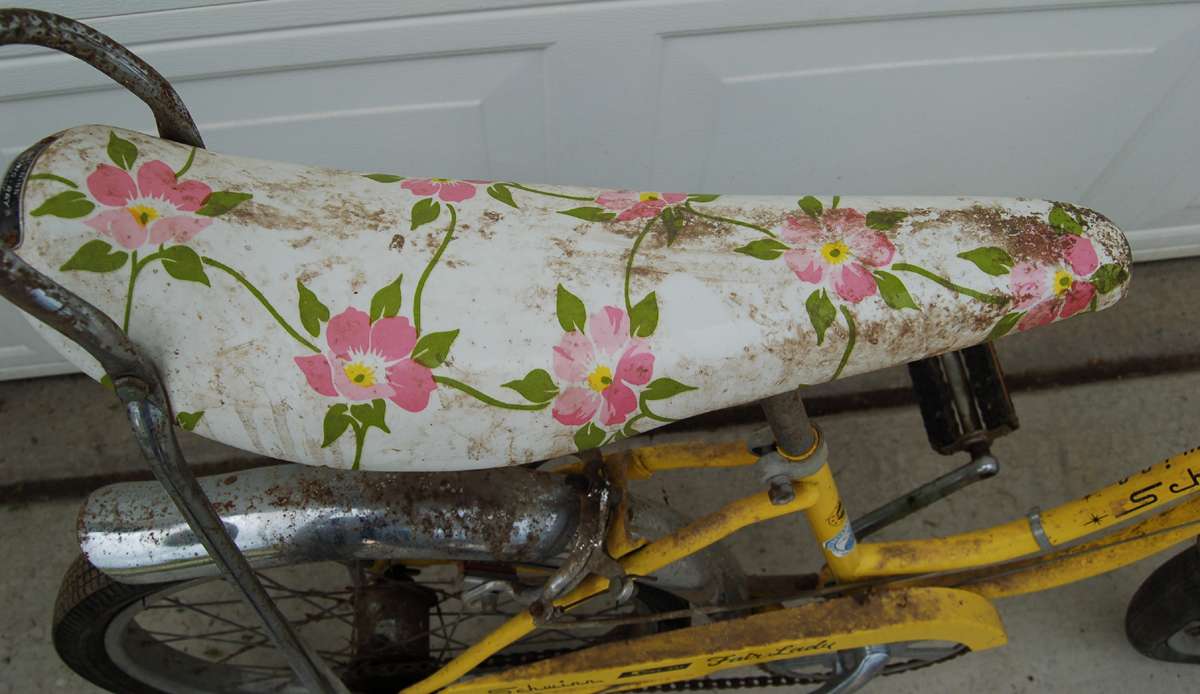 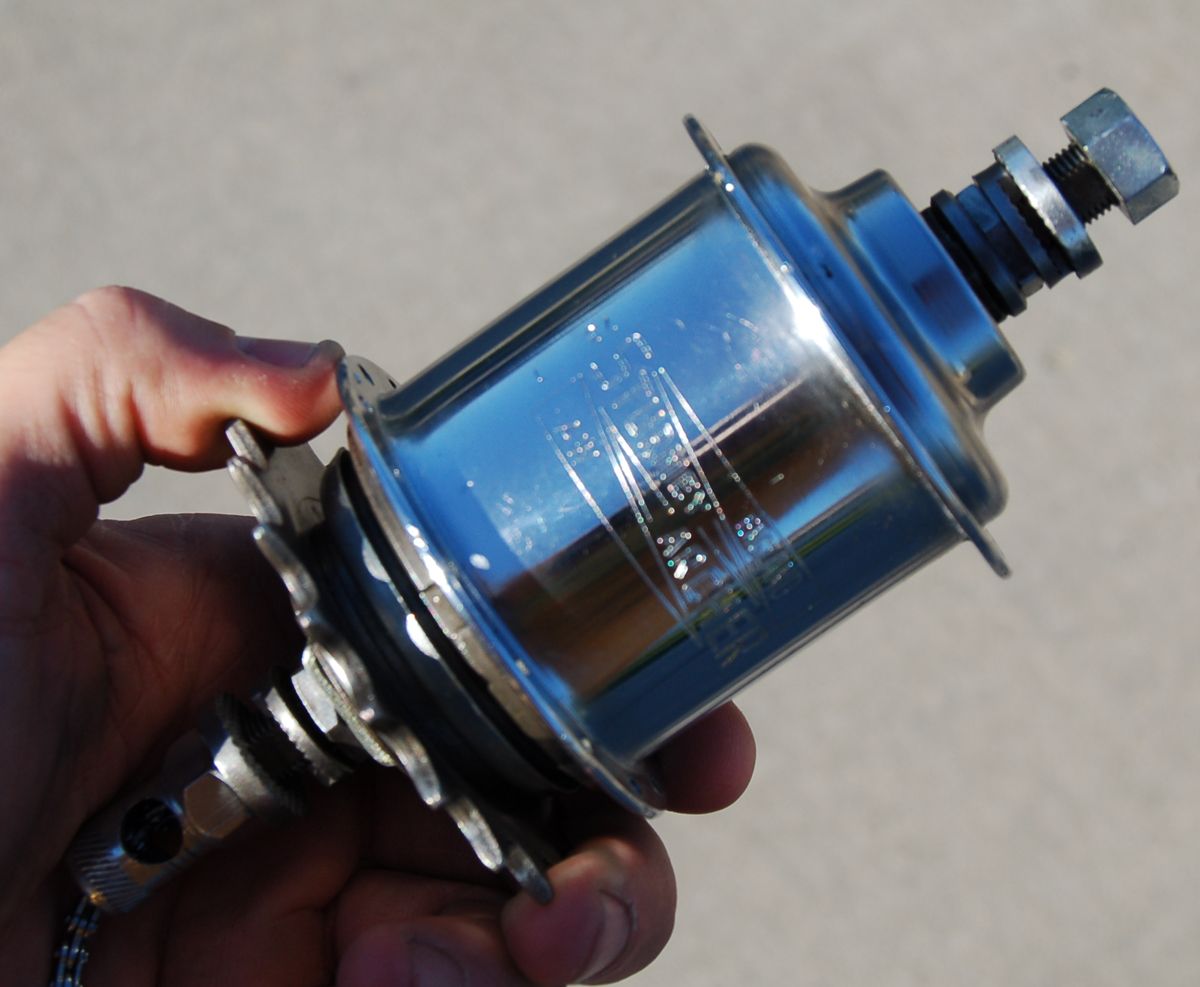 And I overhauled the front hub as well, and cleaned up the rims in preparation for priming the inside then re-lacing with new spokes. I'll tell you, nothing comes back from the dead like old Schwinn chrome. 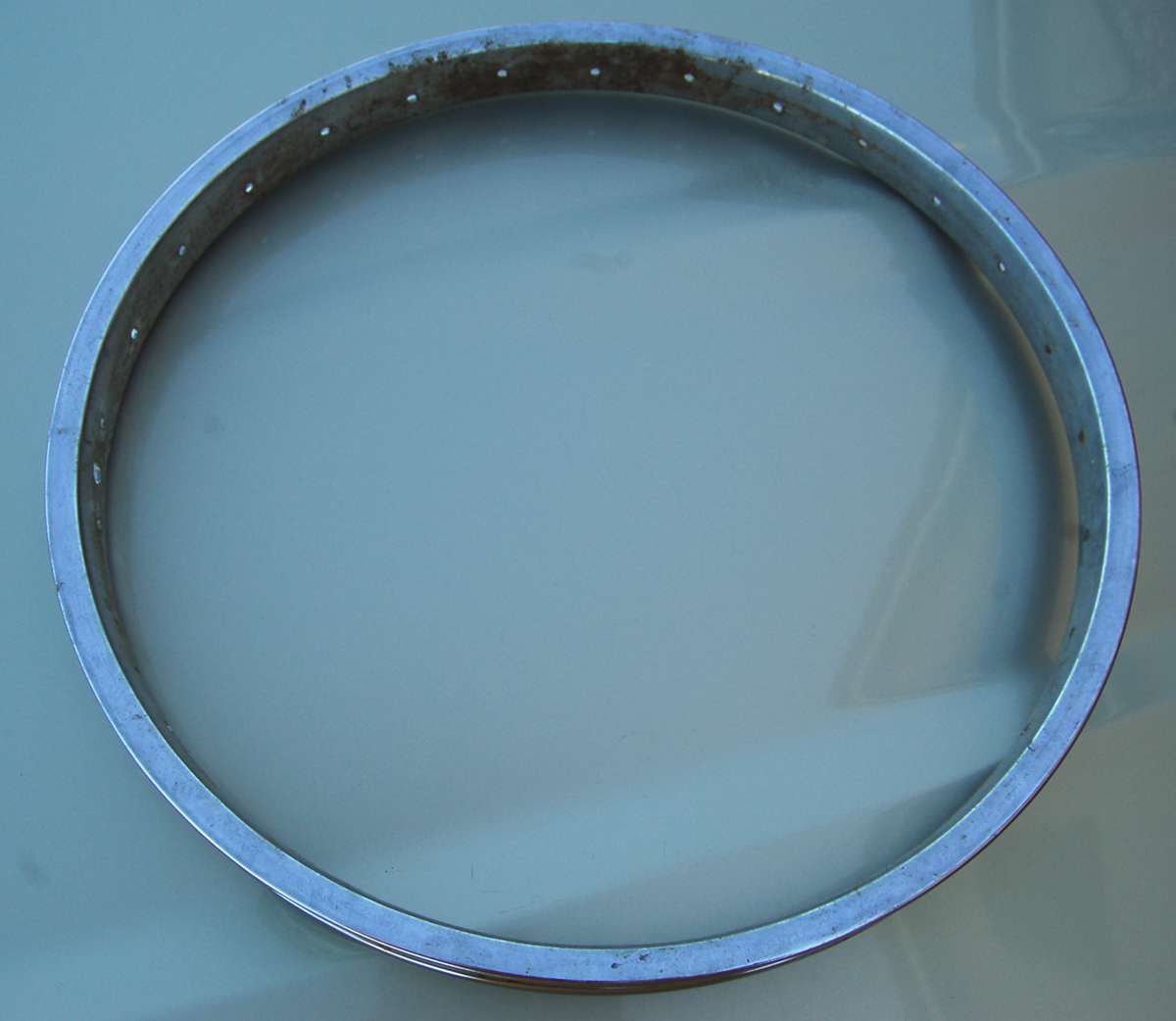 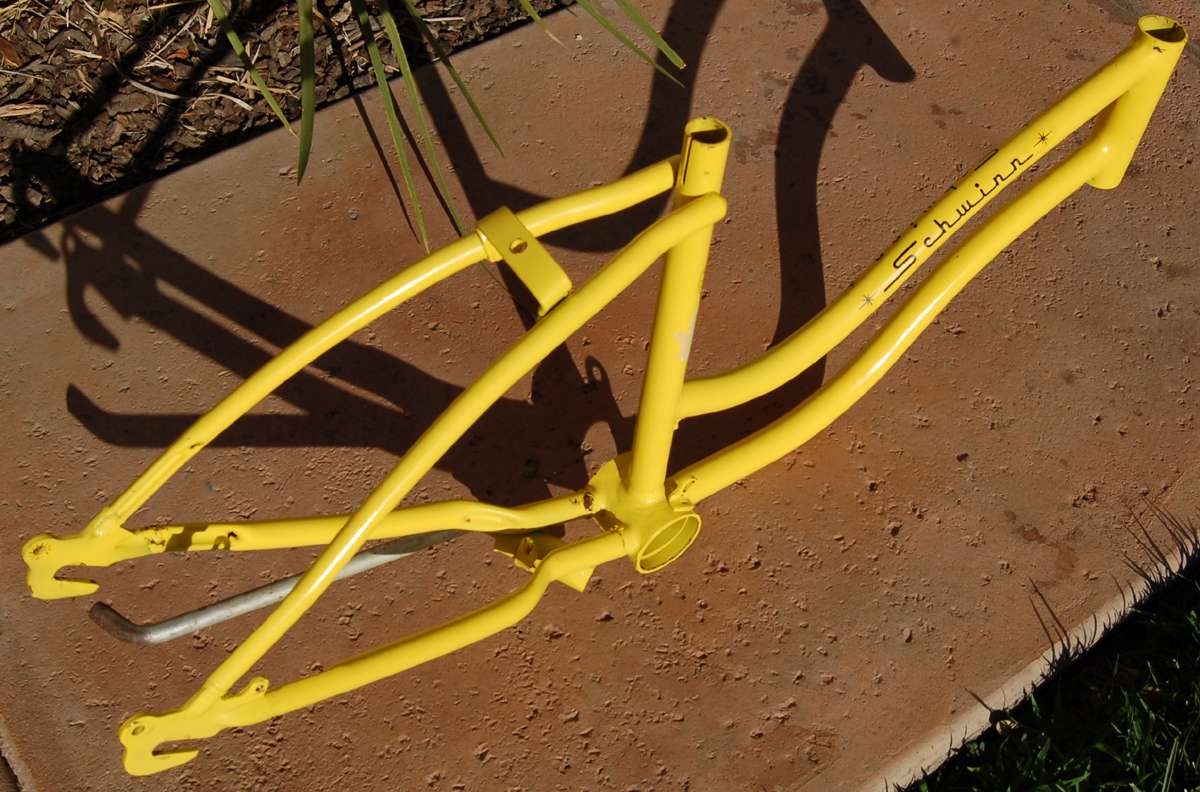 And here's the worst of the paint chips. They didn't smooth this weld at all, so the paint just chipped off it. I think I'm going to file smooth the worst of it, soak the rest in Evaporust-soaked papertowls covered with a plastic bag, then hit the spots with some Kool Lemon touch up. 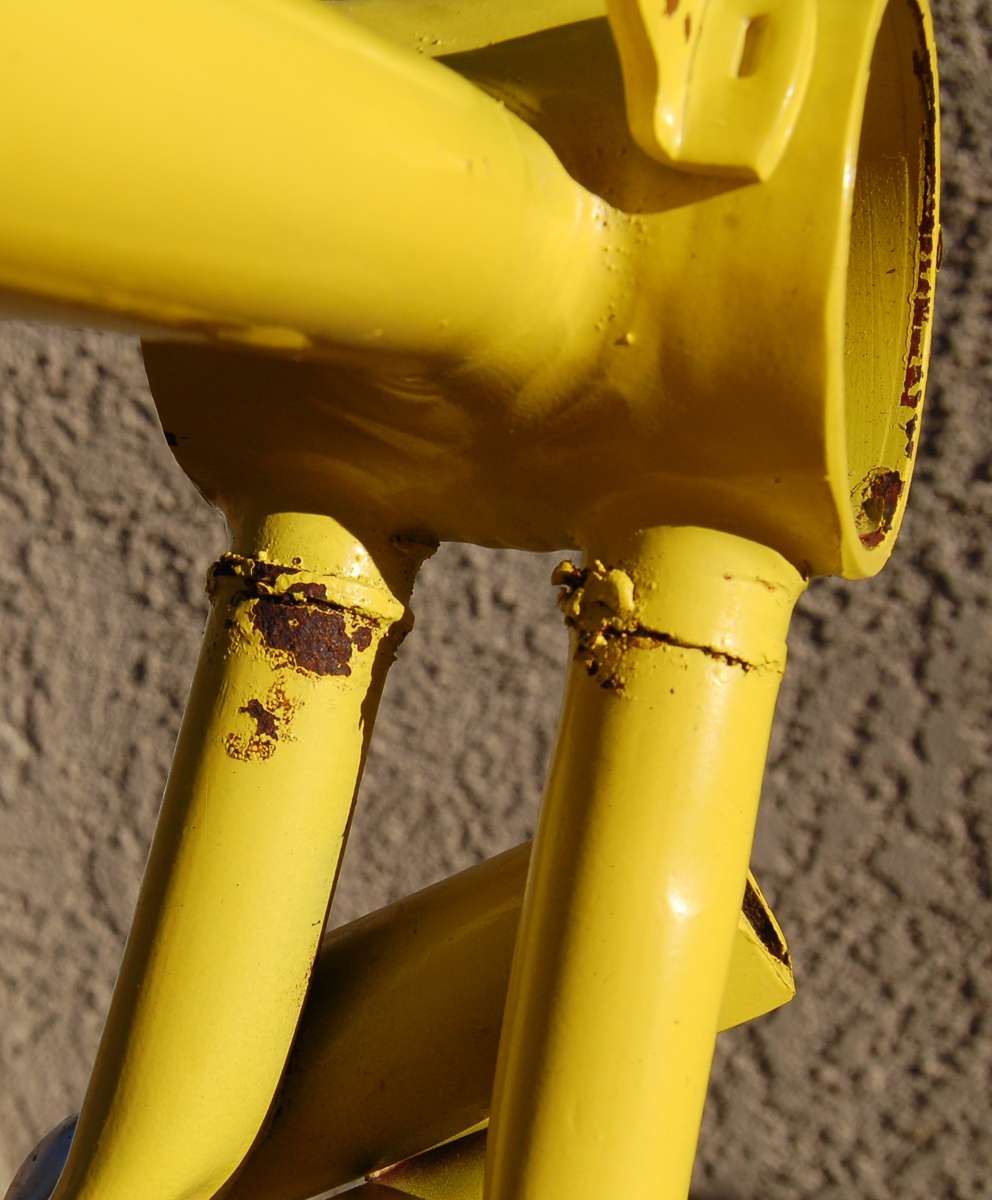 Rating - 100%
63   0   0
Haven't touched this in a while due to other projects, but tonight I made a big step in progress towards putting the owner on this bike.

I taught my daughter to ride on two wheels. This is a quick vid of her first solo trip without me running next to her.

Misty eyed, I was.

Update on my deadline: This bike is going to be for her 7th birthday in June. I've been working a lot of other bike projects for the MBBO and WBO, so this one is going slow.

What scares me the most is, if I die my wife will sell my bikes for what I told her I paid for them.

Rating - 100%
63   0   0
wow, great work. You are the master when it comes to this level of restoration.
"It’s kind’a tough to grow old when your feet are sitting on a pedal!" -ZigoteLittle (RIP)
search eBay user ijt64 for Made in USA Thompson Classic ball end grips and coke bottle grips

Rating - 100%
63   0   0
I've had this bike set to the side for far too long. I wanted to make a mad dash to finish by my daughter's birthday, but a couple hic-ups kept that from happening, so I just want to get it done for her so she can have it. I had lost the kick stand pin, but just got a replacement in tonight, so I'm back to work. Here's a couple catch up photos.

The frame had a number of small nicks that showed the red primer and some rust. Before I touched them up with some Kool Lemon I purchased from Pete at Hyperformance I wanted to try to take care of some of the corrosion. So, I wrapped the areas with shop towels and soaked them for 24 hours with Evaporust.

This method worked ok, but I think I would have been fine without it. I touched up the paint in a couple thin layers and kept it as smooth as I could. After I let that dry for a couple days I used some cleaner wax to cut in to the old paint. Then I put two layers of Turtle Wax on it. Nice, smooth and shiny!

Now I'm polishing the parts I should have polished over time, but I'm rushing to get them done. Brakes, bolts, etc. I had to take a couple things to the chrome shop to have them refinished because they were too far gone, but the rest should polish out nice.
Visit my build gallery: Crash's Build Page

Rating - 100%
2   0   0
Nice job, you've inspired me to finish my grand daughters bike I picked up a few months ago, her 10th is in a few weeks so I'm on the clock. Putting my Firestone Rail aside till I finish hers.
Check out my builds, MBBO4 Wheel'n in the years http://www.ratrodbikes.com/forum/index.php?threads/mbbo-4-class-1-wheeln-in-the-years.94264/ MBBO5 Altered Ego http://www.ratrodbikes.com/forum/index.php?threads/mbbo-5-class-1-huffy-altered-ego.100155/
If it ain't broke . . . tear it apart and fix it anyway!

Rating - 100%
63   0   0
Update from tonight. I'm waiting for a couple small parts before I take the next step, which is putting the shifting together. I also found a problem with the front tire. I inflated it, and it's got a bulge. It's a NOS tire, but at some point the rubber stretched out. :banghead: Rating - 100%
63   0   0
I've run into a BIG problem!! I bought a NOS Schwinn SA 3-speed cable for a Sting Ray assuming that would also fit a Fair Lady. Tonight I tried to set it up and it installed incredibly short. There is no slack at all. I don't understand what the length numbers indicate on the card. What length should I be looking for, and does anyone have a correct one?? (This birthday bike is falling farther and farther behind her birthday!)

Rating - 100%
6   0   0
The larger number is the cable length. Smaller number is the housing length. You might be able to get it to work on the top tube. I think that's how it would be on a Stingray. That's one sweet Fairlady..

Rating - 100%
16   0   0
Yup, they are different lengths. The packages are marked though, so measure out about the length you need on the bike, and look on the package for the one you need. The first number is the inner cable length, the second the outer cable length.

So on the picture you posted, it is 54 inches on the inner cable, 25 on the larger outer cable.
Always looking for cool vintage muscle bike accessories...

Rating - 100%
63   0   0
Found a guy who believes he has the correct Fair Lady cable. More to come on that. Also working on getting a corrected speedometer length. A bell is on the way too.

This is what happens when you don't prep or test stuff until you try to install it.