Halfway through removing the 2nd anchor my Dremel 3000 crapped out. I dug out my old Dremel 395, which only runs about half speed nowadays, because the main switch is defective. 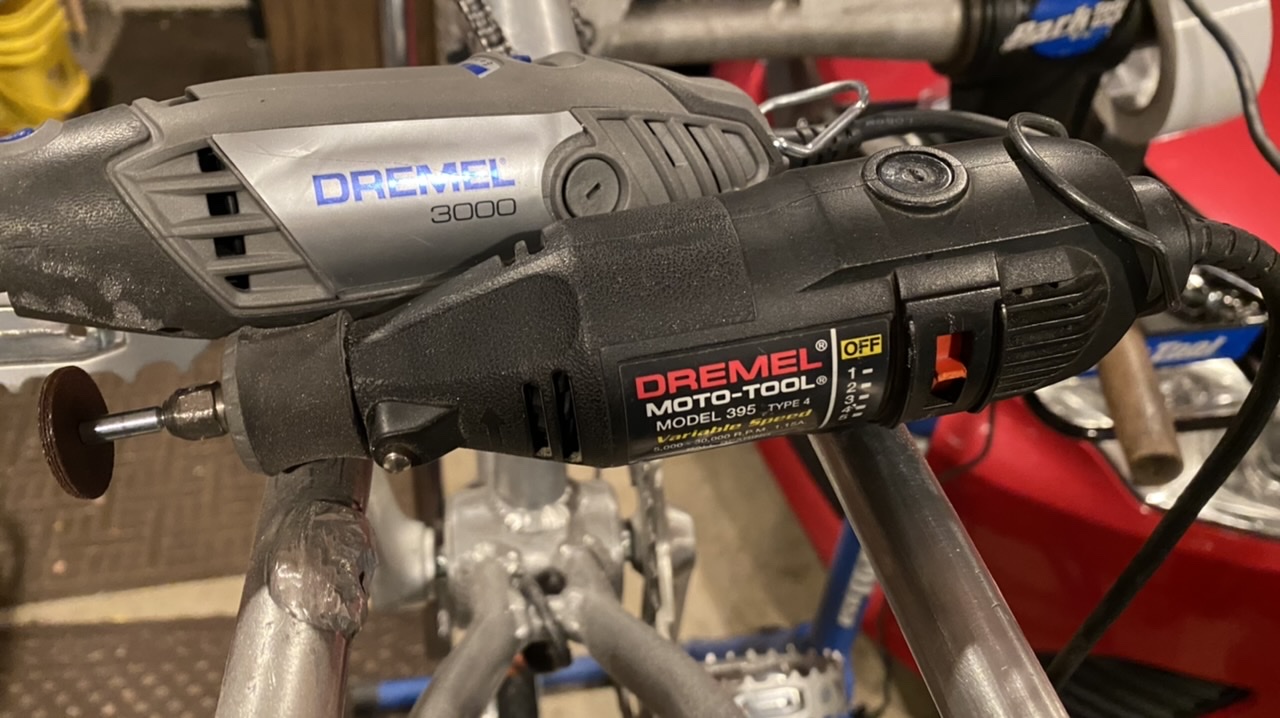 It’s looking a lot nicer without those gunky anchors! 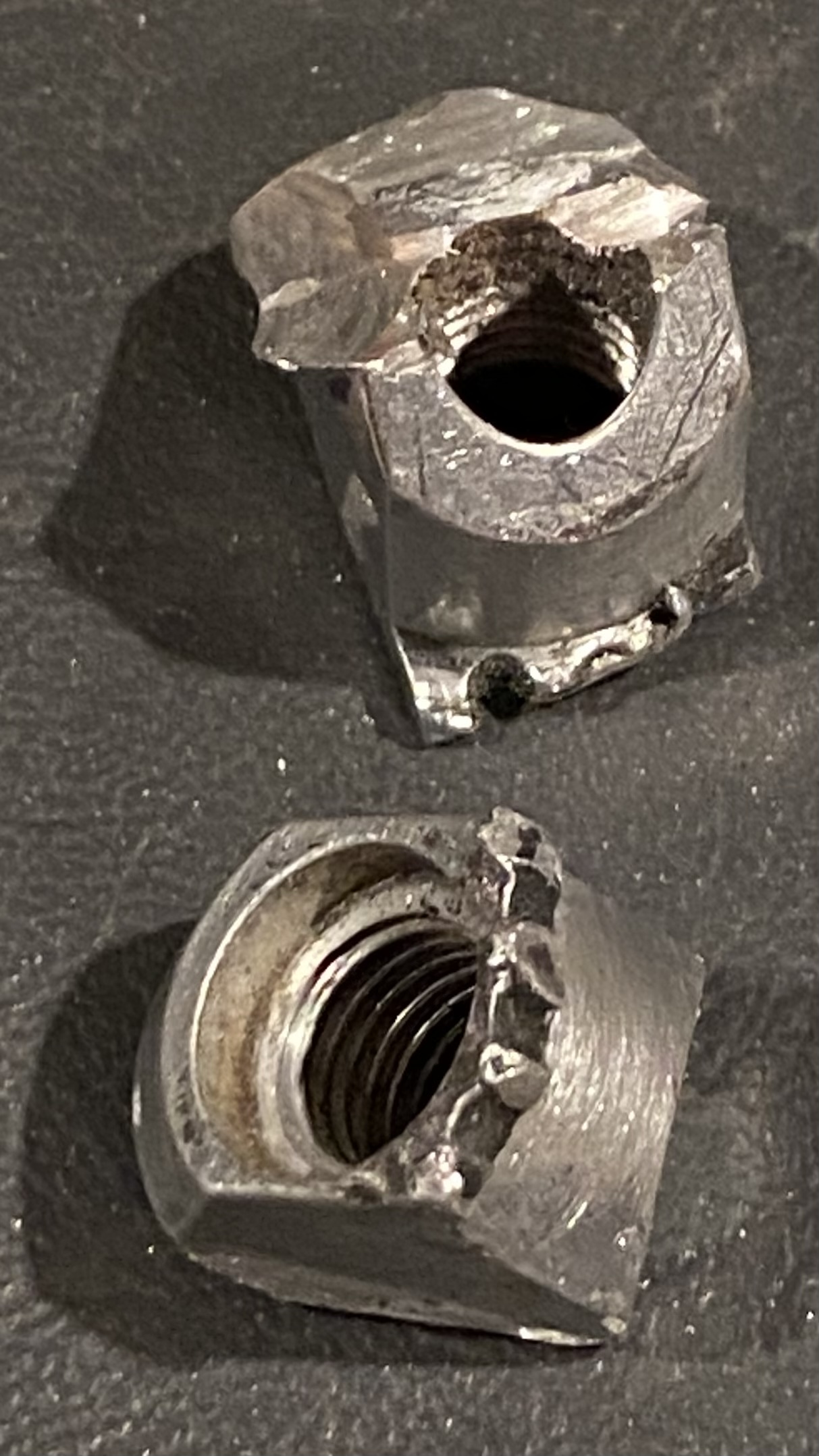 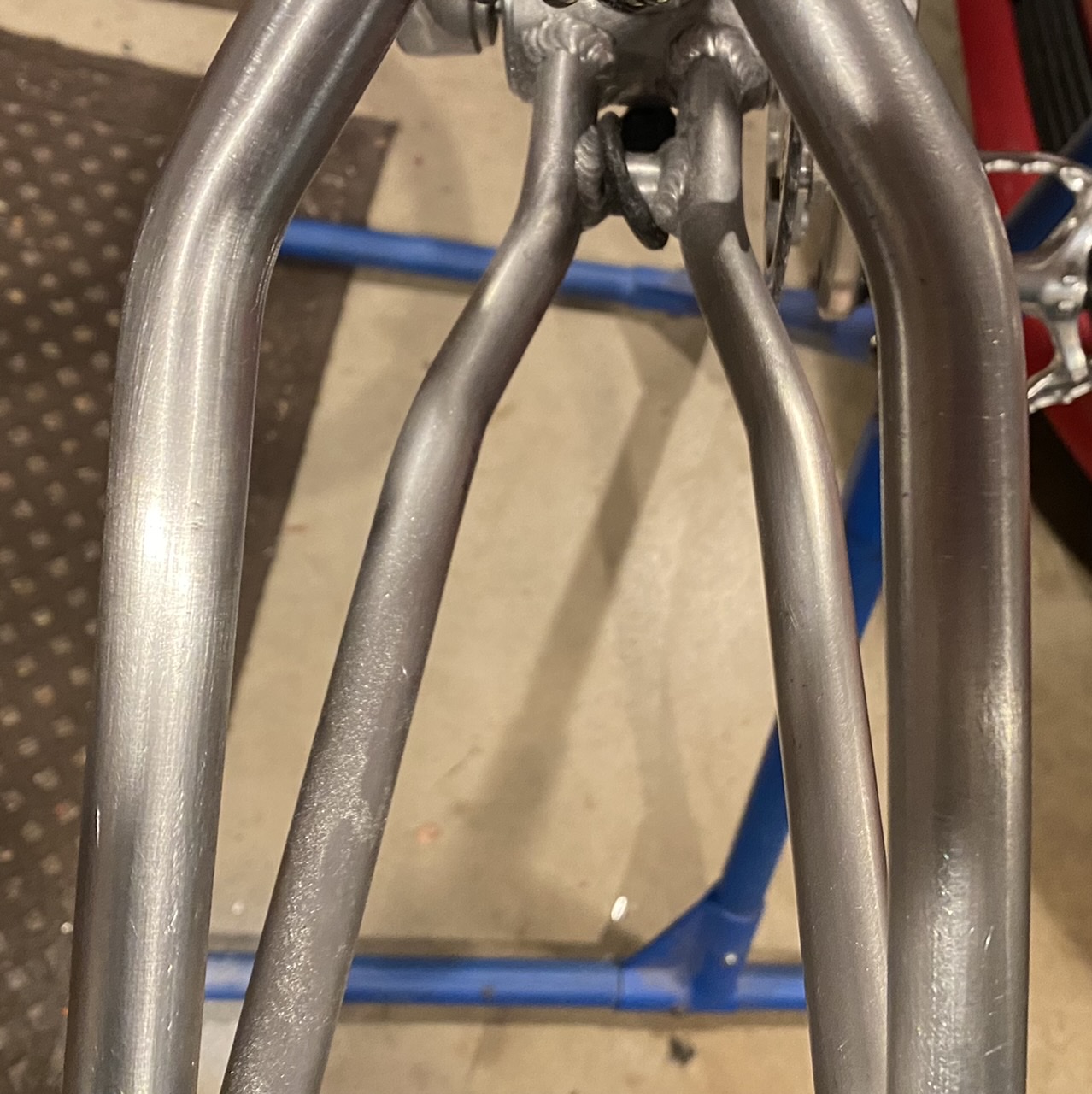 I have a pneumatic die grinder, and I probably should’ve used that instead of burning up the Dremel. But I didn’t want to get out of control and take a chunk out of my frame with it. Also it’s heavier and more cumbersome to control than the Dremel.

Also, the new Dremel was a POS compared to the old, one which I’ve had for 20 years. It just never felt like a solid tool because it had too much flexibility to the swoopy plastic frame.

Anyhow, it’s time to go buy a new one.

I am still trying to work out this system and drop plate arrangement but I think I have a better idea of what I want to do now. The most important thing is I have improved the chain clearance by orders of magnitude and still managed to lower the frame 6 inches. I have a chain clearance on both stays which is greater than the width of the chain, so I think that is OK. 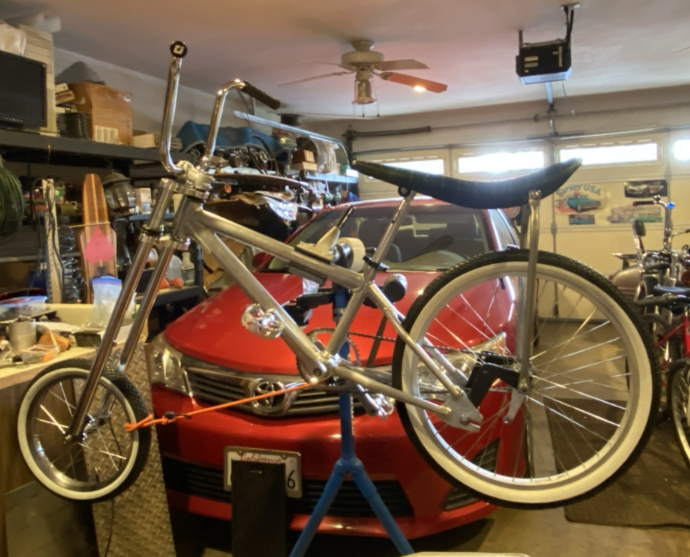 Of course those chopper forks jack the front end up 6 inches at least, so it’s a net gain.

Creating the pattern for the rear dropout bracket. 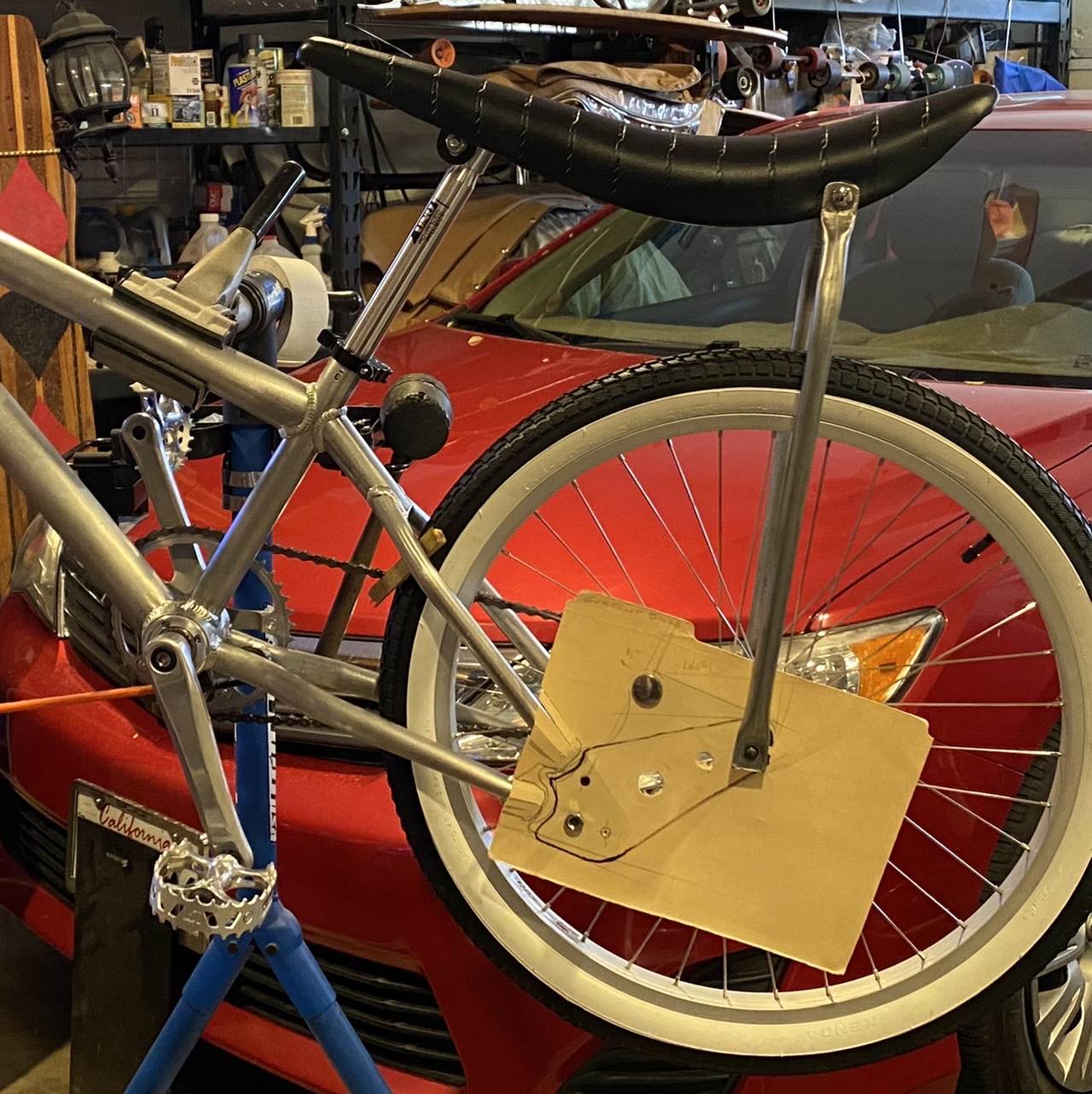 I’m going to do this in stainless steel.

Here’s the pattern, more or less. 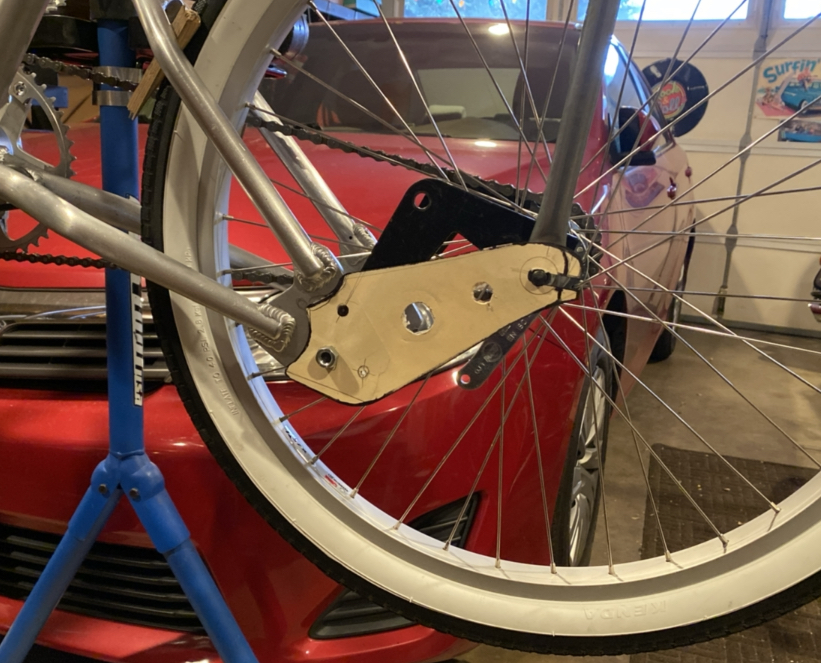 Hogging the first one out of tempered stainless steel. 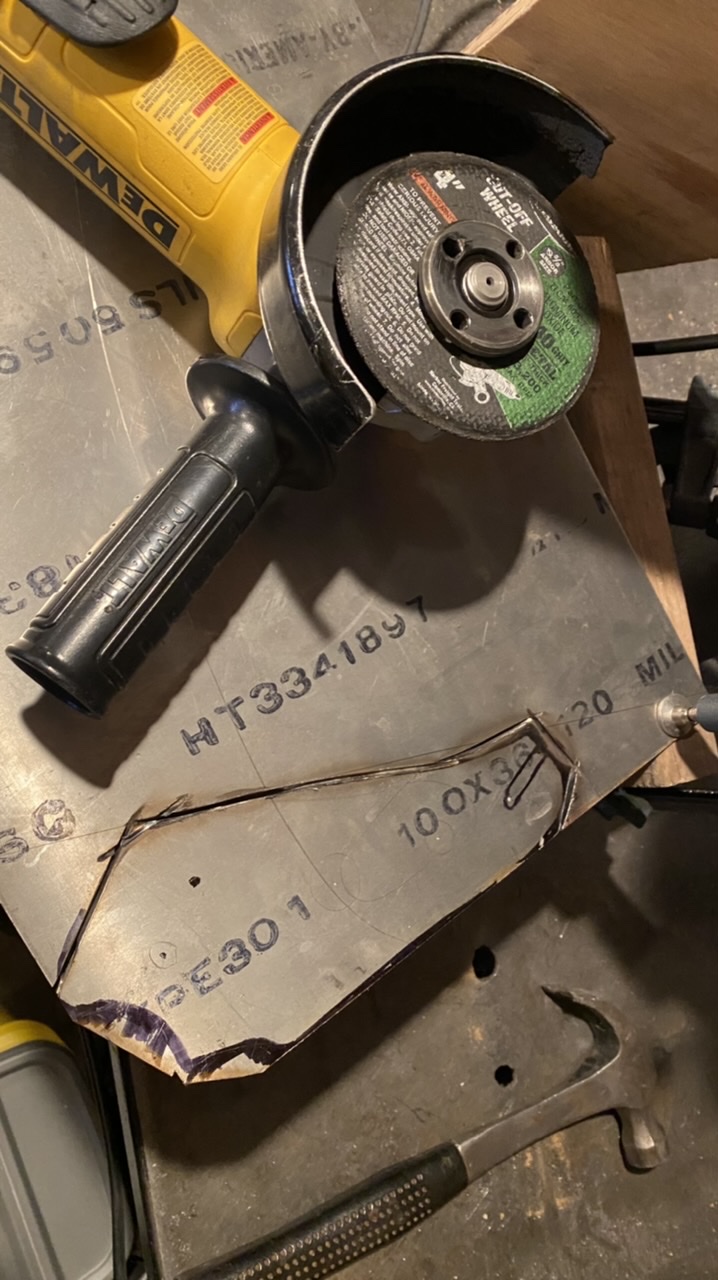 Hogging the first one out of tempered stainless steel.
View attachment 219033
Click to expand...

Nice drop plate you have happening there. Good design and high quality stainless.
I think I can fix it.

Thank you Howie.
You should see what that stuff did to my saber saw blades. It doesn’t like to be drilled either.

I remember making some mudflaps for my car out of tempered aircraft aluminum, and that stuff was also impossible to work with.
Anyhow still more grinding to do.

Of course I have to make the two plates at the same time so I match-drill them both them together before the final shaping. 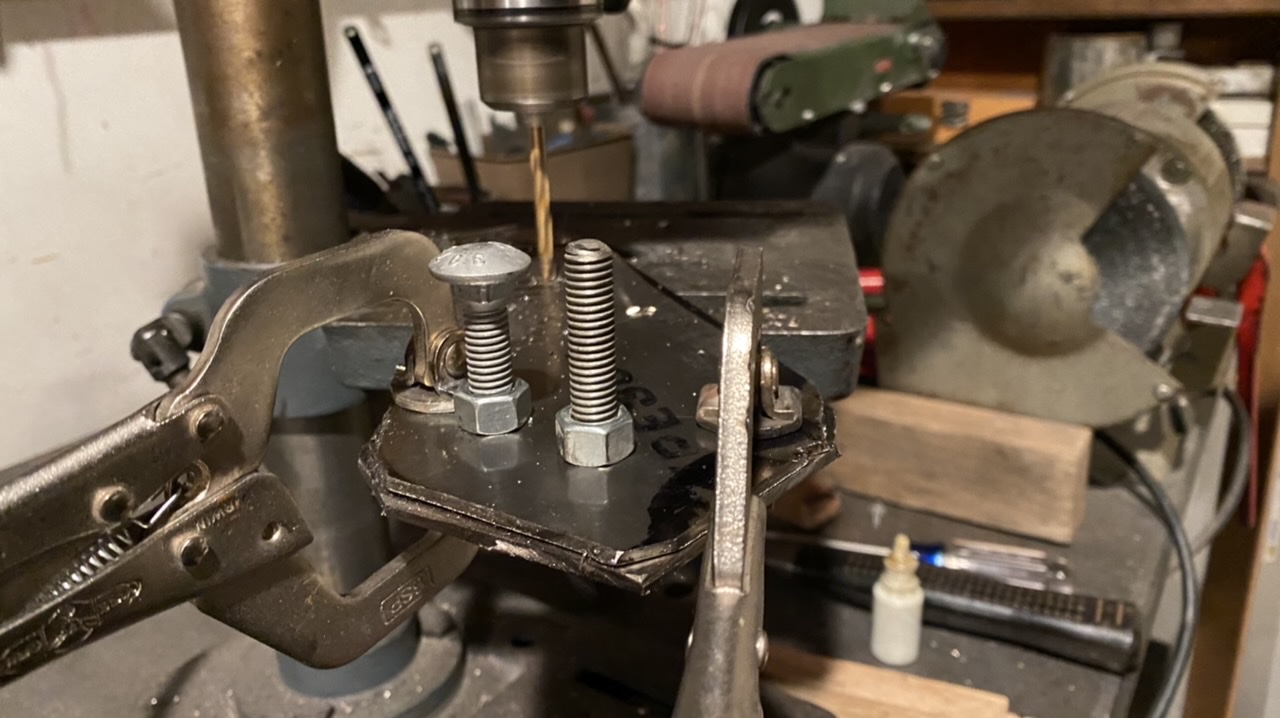 These plates will get five holes and a slot. Of course the slot starts with hole so really six…

Here I am cutting the rough slot with a grinder. 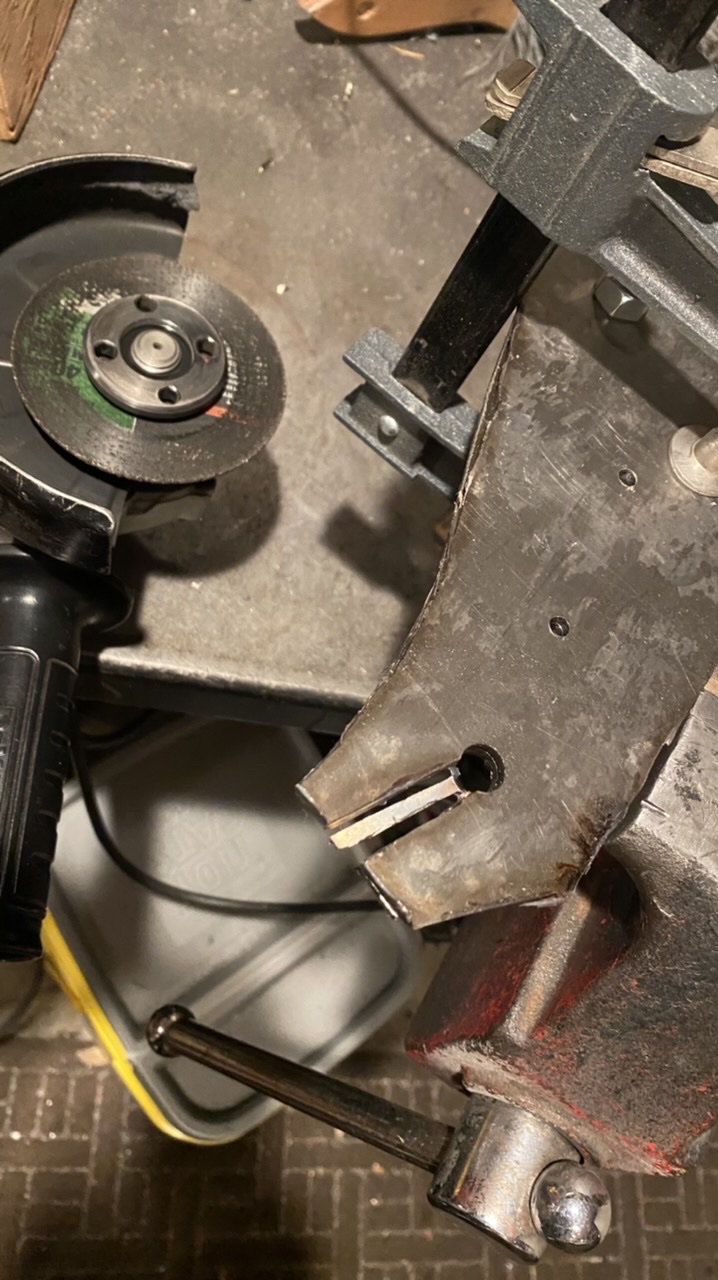 This slot will get finished with the a hand file. Everything else will be shaped with a grinder until the plates match and then file to get a nice edge before I sand them.

Originally I thought about polishing these, but I think I’ll end up just doing a directional wire brush finish.

Location
Over the hill

Love the play by play commentary on how you made the plates!

Well I’m still making them….
It’s a tedious process with lots of filing and grinding on tempered metal. 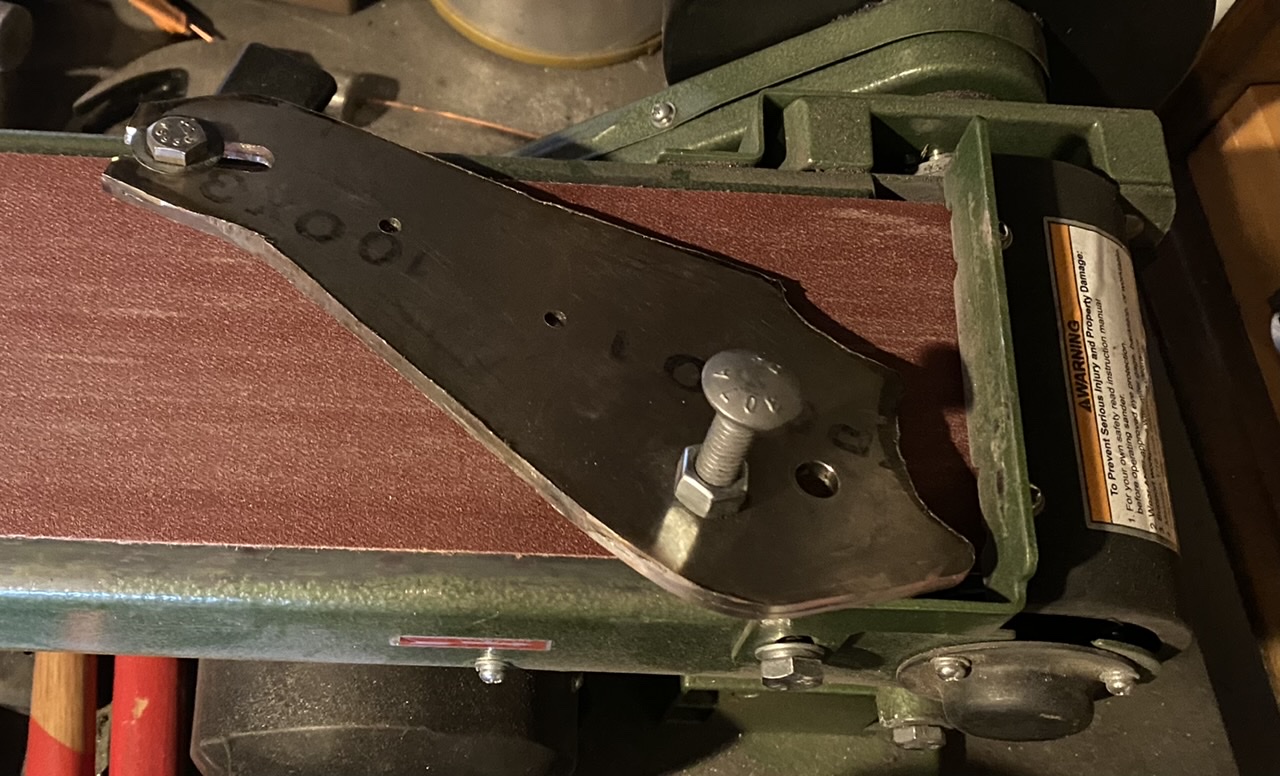 The rough grinding is done and I am starting to put a nice edge on them with the belt sander.

First fitup. No polish yet but I did sand all the edges and de-burr everything neatly.

I haven’t drilled all the holes yet, because I wanted to see if this is going to work at all first, and it appears that it will. 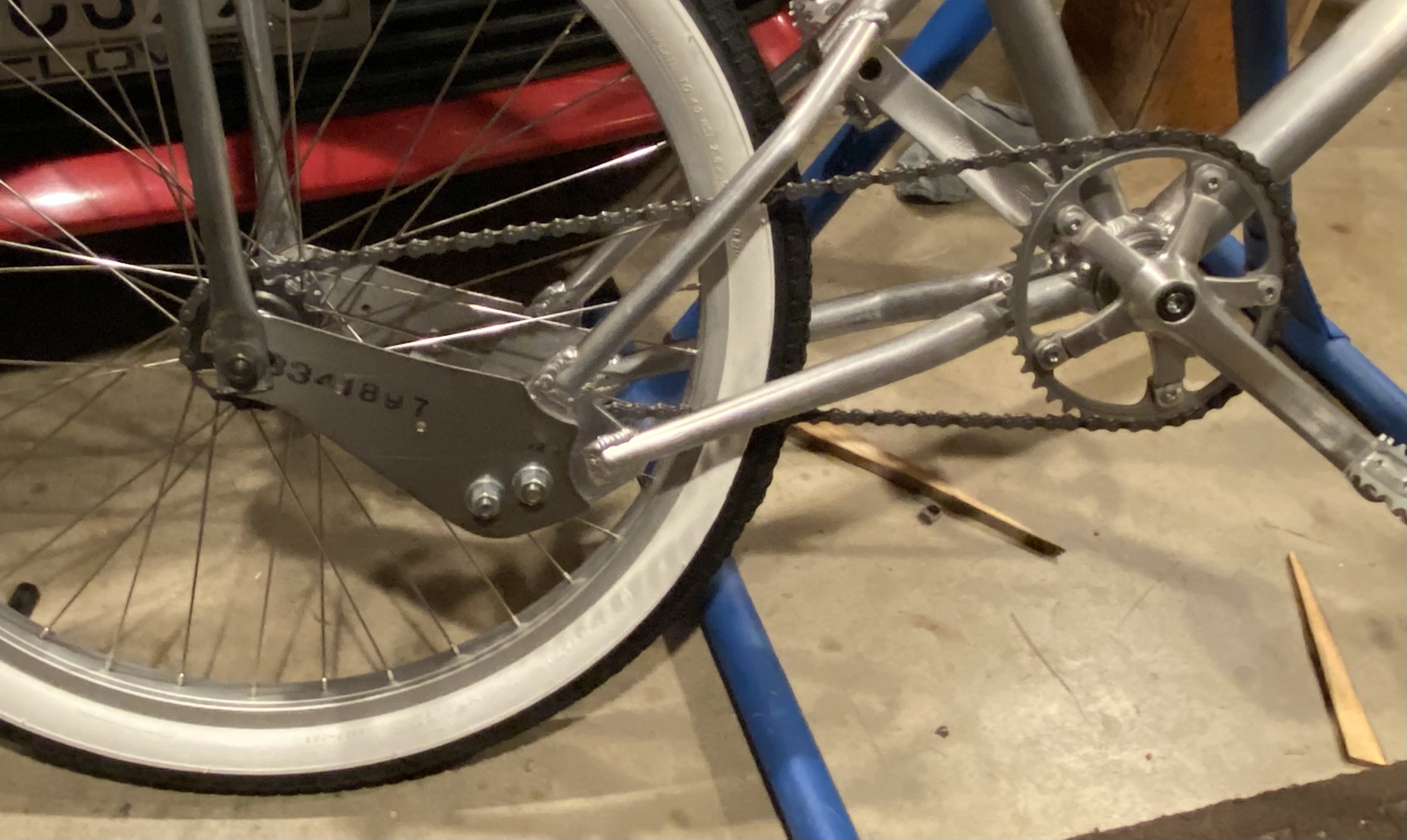 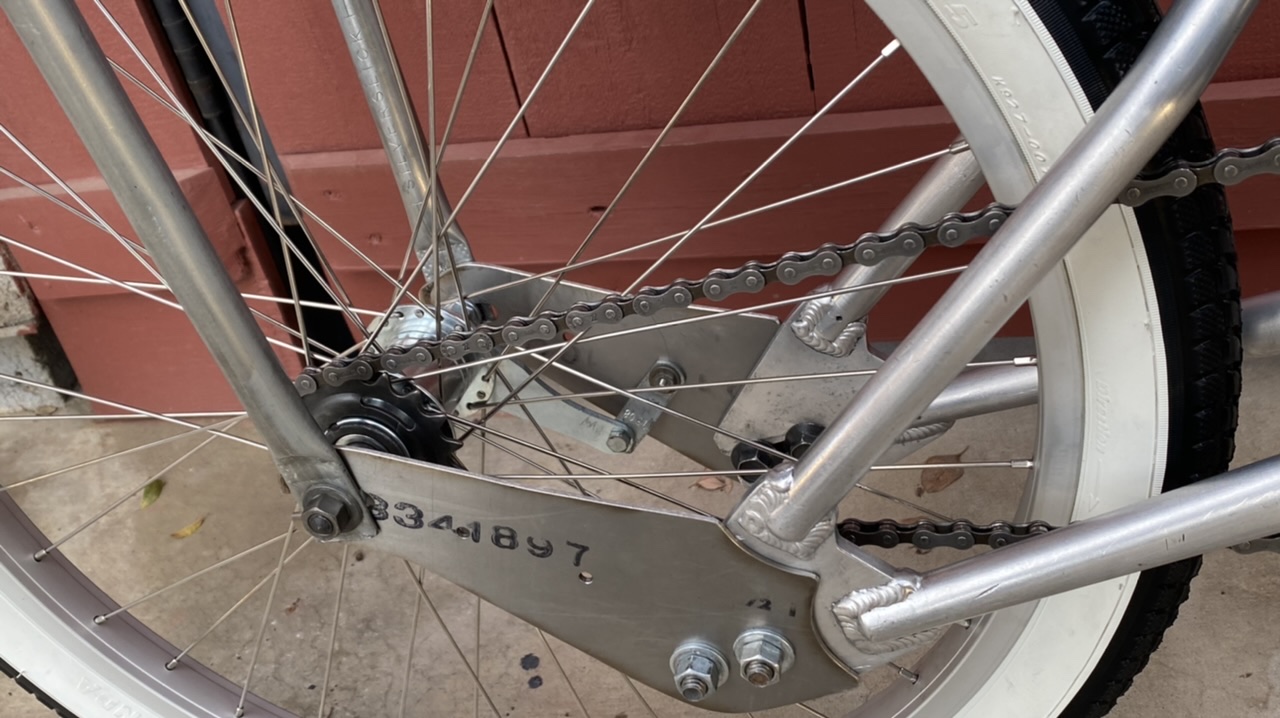 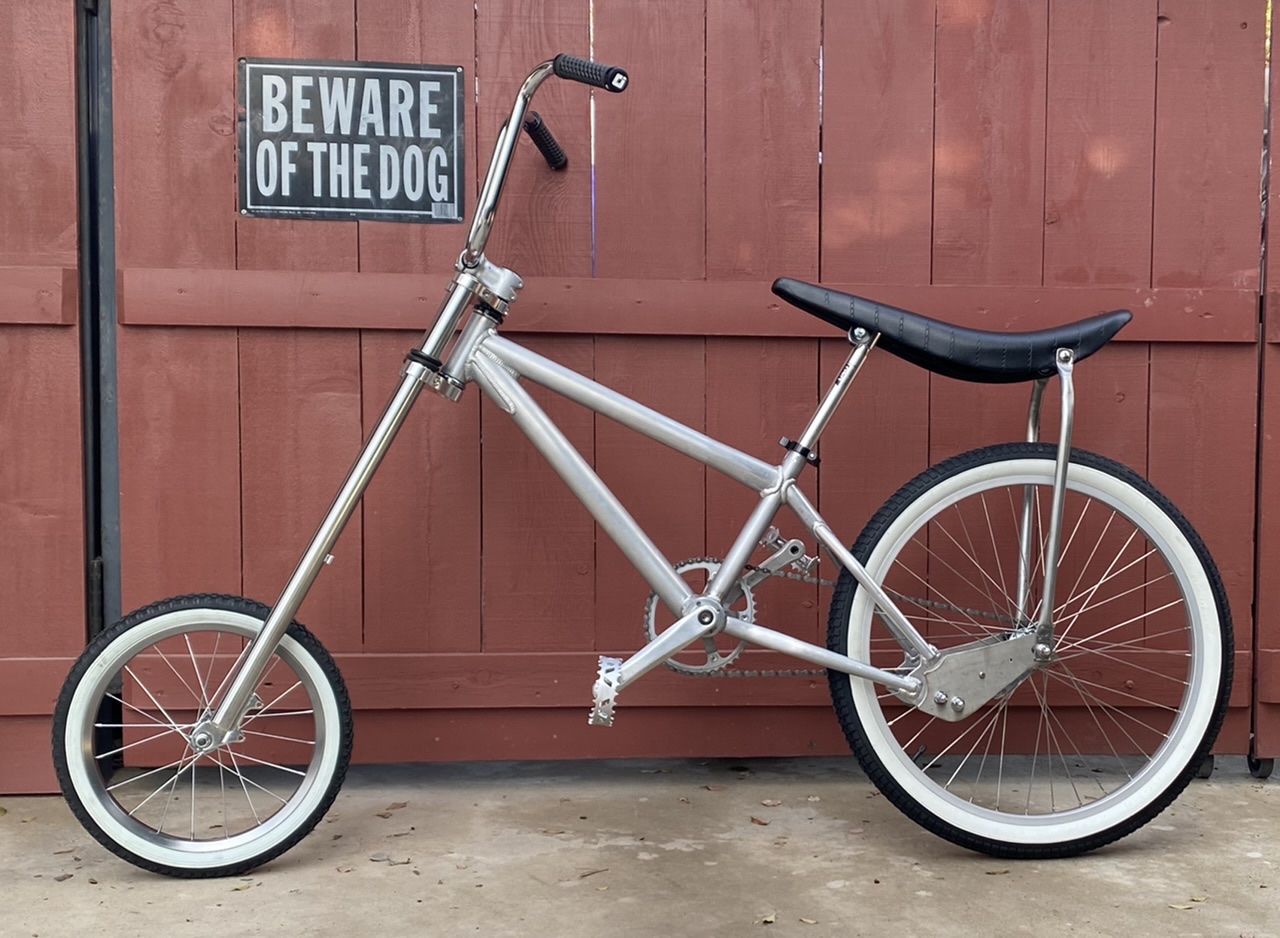 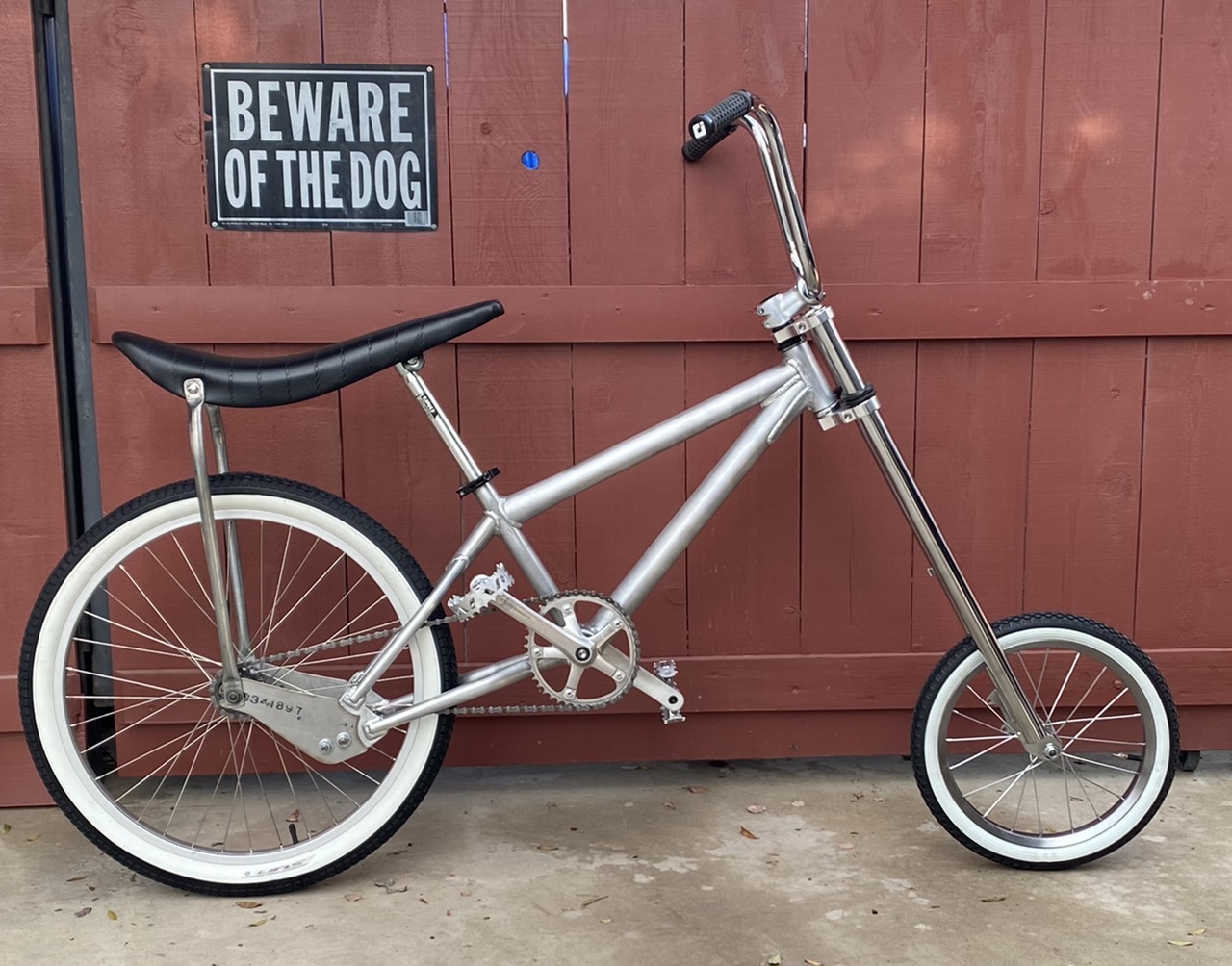 I can actually ride it,
And it’s light and it really goes!
It’s actually even kind of fun!

OK it’s a little bit short for me between the seat and the pedals. But that’s OK because the kids will be able to ride it.

I was doing circles and figure-8s the cul-de-sac with no problem. Those pedals are so nice I am going to have to get some for The Lengthy Insanity.

The seat is super flimsy. Just having struts with no connecting bar does not help. I could feel the Chinese steel squirming under my massive 175 pounds. It felt like one wheelie could make me split it apart.

I have to fix this because I’m not likely not the heaviest member of my family now.

Anyhow the proof-ride has been done (!) The bicycle works well, and from here it’s all just polish and Christmas decorations.

Well, instead of taking beauty shots I went to the hardware store and when I got back the sun was gone.

Anyhow, I took it all apart and drilled the rest of the holes except for the brake anchor, and now I am buffing them out with scotchbrite. 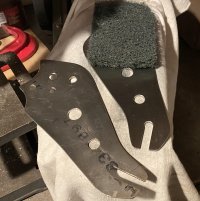 I reduced the size of the lightening holes, because these things don’t need lightening. (What they need might be stiffening if I drilled the holes too big.)

Wonder of wonders, I found out that the axle of the hi-stop is threaded 3/8-24 (!) So chrome acorn nuts are easily available. 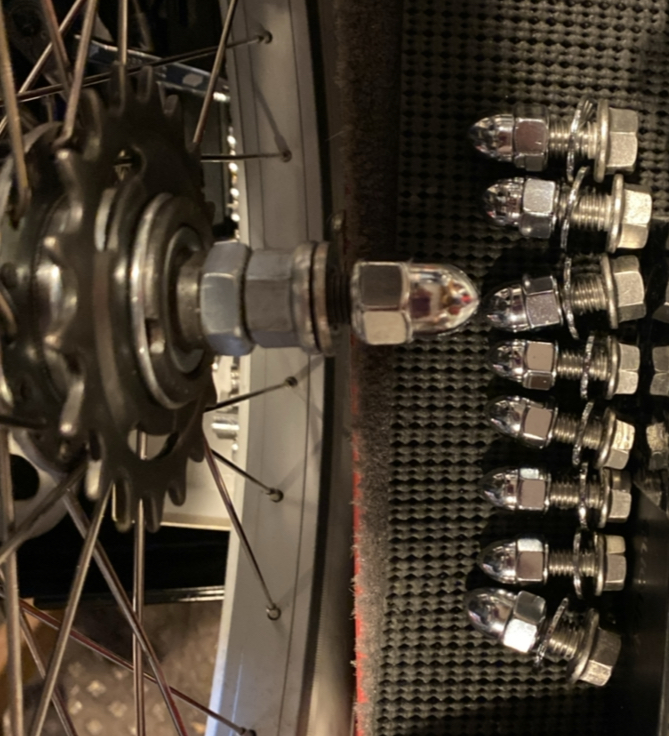 I actually bought a bunch of chrome and stainless to put this together instead of using junk from my collection of leftovers.
Last edited: Dec 7, 2022

I gave these a nice finish with green scotchbrite. It didn’t take out every flaw but then that panel had been drug around quite a bit in the past 45 years. 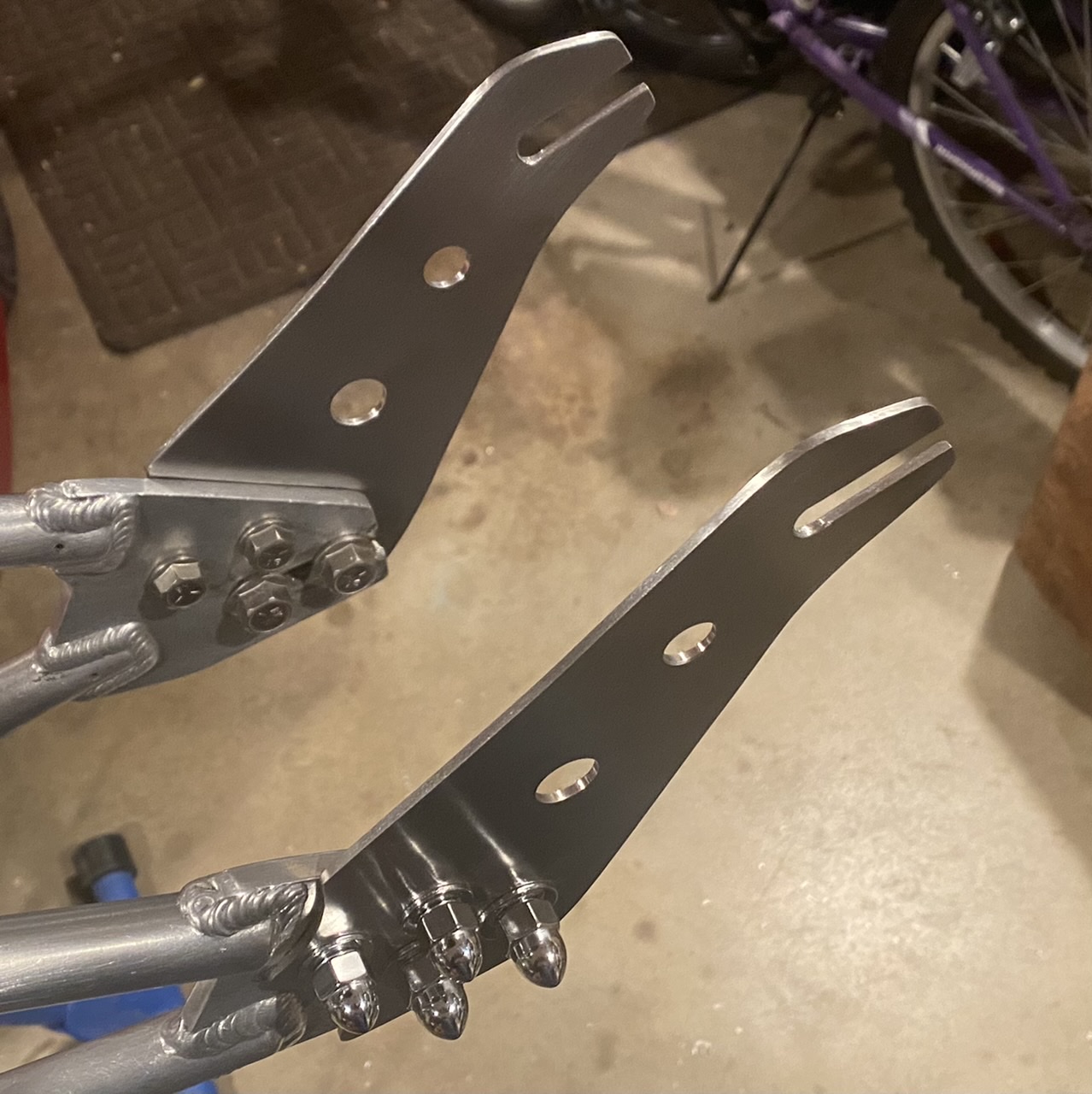 You can see that I added two more 5/16 bolts to each side in addition to the two 3/8 bolts which go through the drop outs.

With tax there’s $60 worth of chrome and stainless steel hardware for these connections, Including the axle nuts.

But I was lucky to be able to get it with an easy driving distance, and it will be around when I am long gone.

Now I have to make a sissy bar that matters.

Ah, so many beautiful parts, and I am quite jealous of all your equipment. Well, I would be, if I didn't live way out east like I do, where even buying metal is a challenge for my very poor language skills

GeePig said:
Ah, so many beautiful parts, and I am quite jealous of all your equipment. Well, I would be, if I didn't live way out east like I do, where even buying metal is a challenge for my very poor language skills
Click to expand...

I don’t know where I could get another piece of high-quality US made tempered aircraft stainless, unless I ordered it on the Internet. I got that when we lived on a nuclear bomber base in Utah.

It was strange, as a kid, I had access with my bicycle, to military places that would be much better secured nowadays.

We used to get abandoned stuff from military junkyards to build treehouses and fake machine guns. I remember riding my Schwinn up to see the trailer mounted mobile ICBMs in a parking lot.

My father was in the strategic air command. I was there when they brought in the atomic bombs, and made Hill Field a B-52 bomber base. That’s the closest I’ve ever been to plutonium before or since.

As for the equipment, most of the electric stuff you see is Chinese made, although it has held up well for me as a hobbiest. The electric bench grinder belonged to my father and it is at least 50 years old. I sharpened his lawnmower blades on that grinder 100 times.

Really, the most important thing is the steel workbench, which is Genuine World War II US navy surplus. Nobody builds things that thick anymore. It was a gift from another mechanic.

I also have an industrial air compressor with a 30 gallon tank. It is only 4 CFM but 100% duty cycle. You can buy a 4 CFM compressor nowadays that weighs less than the flywheel on this one. I paid $300 for it NOS in 1984, but you couldn’t buy something like this new, nowadays. The iron is way too thick. Designed in the 40s.

I want to brag on and on, but I must tell you that I am very jealous of the fact that you have rural property. I live in the suburbs on 1/3 acre, and although it’s very nice, there’s a limit to how much noise, smoke, fire, and blacksmithing I can expect my neighbors to put up with.

There’s no way that I could run a real forge here or have a power hammer, my wife will never move back to the country, and there’s no way I could afford a second property.

Making the struts. These are just half inch galvanized EMT. I will buff these up later.

Because I will have four struts, two of them will have to be slotted. Otherwise I could not adjust the chain without binding everything 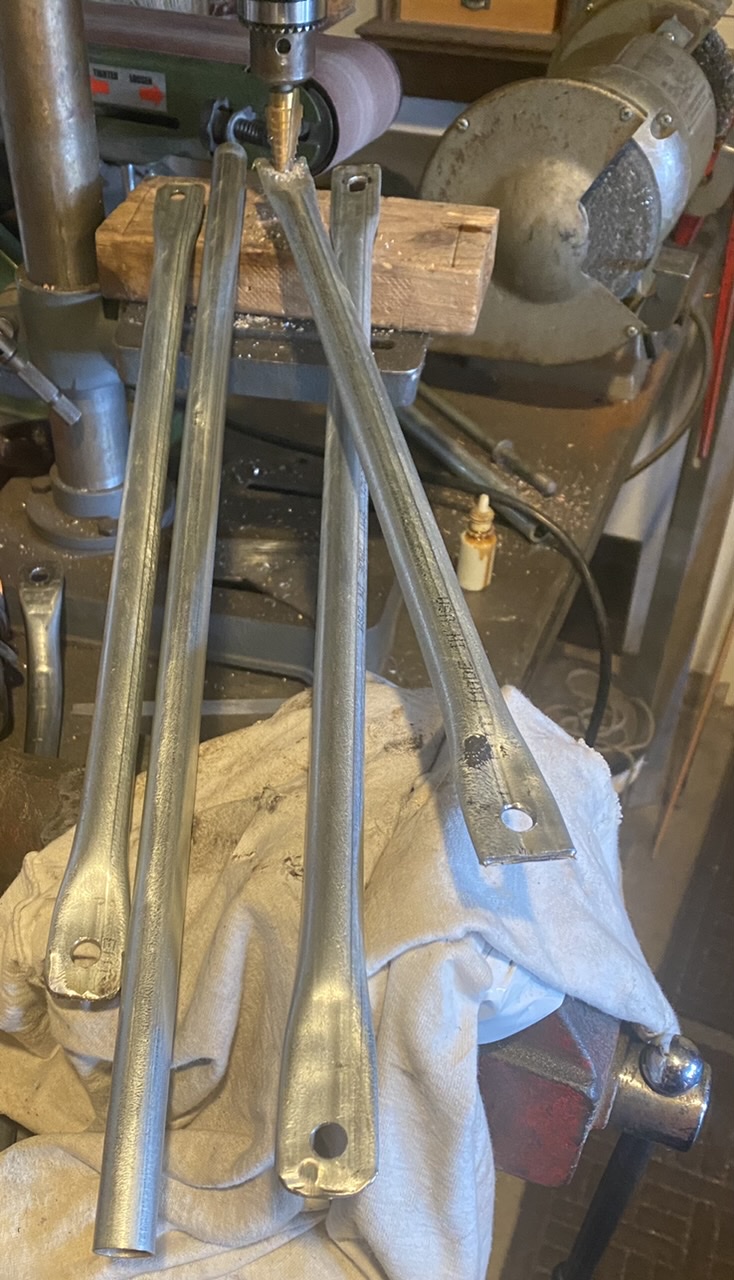 That should be big enough but I will find out when I go to adjust the chain. 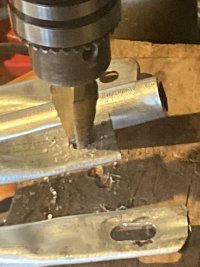 Yes, living in a village at the end of a road, on the other side of a small forest, where most of my neighbours are farmers, does have some advantages. Sadly they plan on extending the road through the forest to meet a new railway they are building through Poland, so I suspect that things will become a little busier in the future. They have already marked out where they are going to build a path on the other side of the road, which passes right over where there is a well, not that anyone needs such a path at the moment.

Still not done. Too much to do getting ready for Christmas. 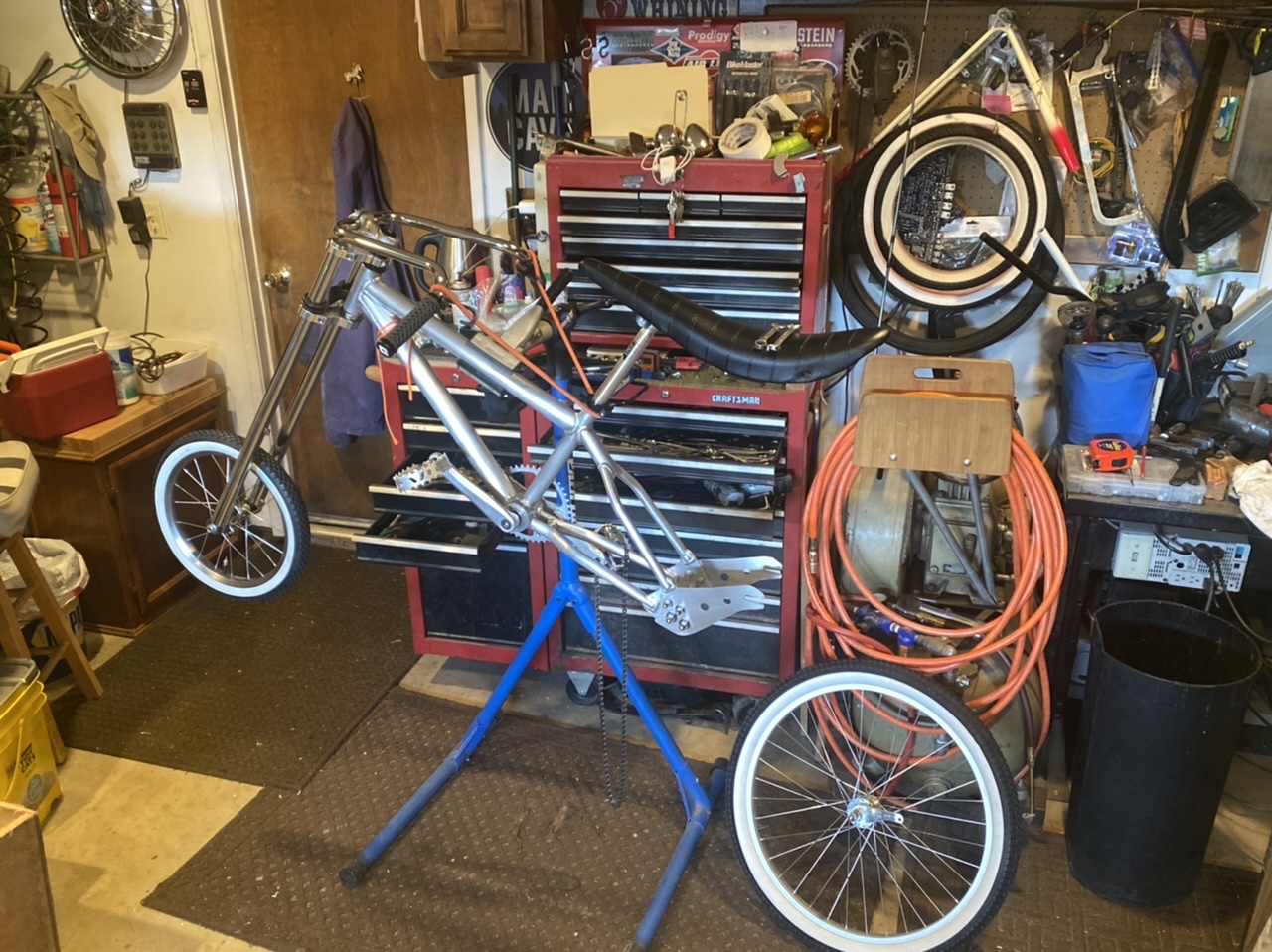