Rating - 100%
5   0   0
I keep trying to downsize and finish the projects I have, but as Mike Wolfe would say "the best time to buy an antique is when you see it". This popped up on CL about 45 minutes from home: 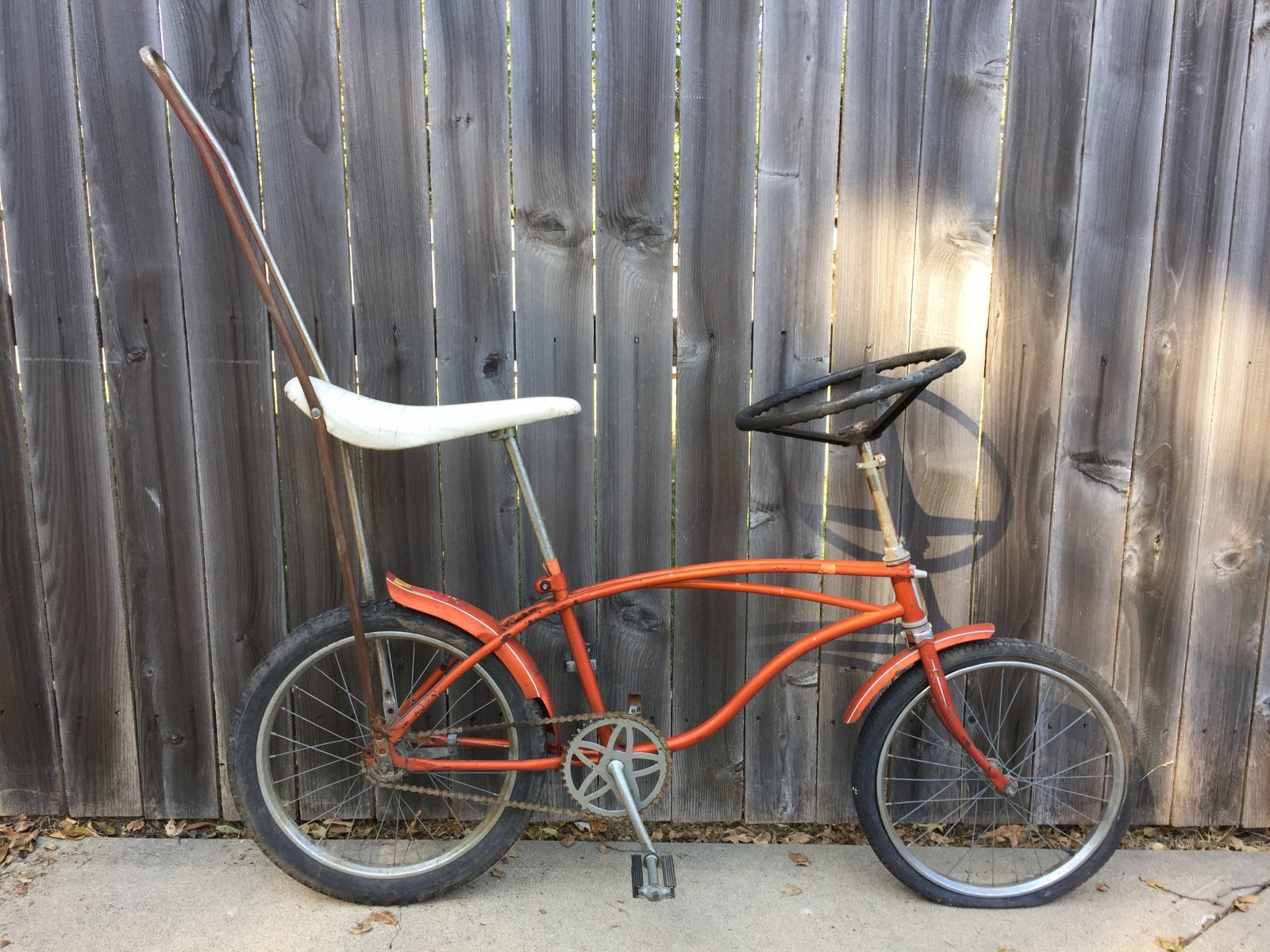 Bought it from the original owner's brother. It's missing a spoke in the front wheel, the kickstand, chainguard, and center cap for the steering wheel, but all in all very complete and in nice original condition. It looks like a Huffy Rail frame, and I know Coast to Coast was a store brand. Can anyone tell me which chainguard this one would have had and if it's possible to find a cap for the steering wheel? Thanks!

That is a base model Huffy Wheel. Badged Coast to Coast. The base model had the black steering wheel and painted fenders. The guard on that would be the hockey stick style, not the Flaming Stack style. This was a 1969 only bike I think, they only made the base model one year I believe.

Very cool find man! I have a cap and guard for you! PM me when you can.
Always looking for cool vintage muscle bike accessories... According to Wikipedia, they made the Wheel bikes until 1971, when all the good stuff was outlawed. Your serial Number should give the year, H8 or 8H at the beginning would be 1968, H9 1969 etc. From wiki:
"In 1966, Huffy introduced a new long-wheelbase bicycle frame called the Rail. The new frame was approximately 4" to 5" longer than previous models. The new frame became Huffy's base model until 1968. In 1968, in an effort to market a children's bicycle with an automotive theme, Huffy designers added a car-type steering wheel in place of handlebars to the Rail frame, which became the Huffy Wheel. Tall "stick-shift" derailleur gear shift levers mounted on the frame top-tube imitated the gearshift levers of popular muscle cars of the day, while many banana-seat cycles were fitted with tall chromed sissy bar passenger backrests at the rear of the seat. In mid-1968, Huffy released the Flaming Stack chain guard, which was designed to look like the distinctive side exhaust pipe covers on the Corvette sports car. Later that same year, Huffy released a new Slingshot model with 16" front dragster wheel, and 20" rear. The new 1969 models where the last year for the three-bar Rail frame style. In 1970 Huffy deleted their three-bar frame and went to a two-bar Rail frame, eventually adding additional two-tone fade paint jobs along with Persons striped seats. These designs continued in production until 1971 when new safety and manufacturing restrictions from the BMA (Bicycle Manufacturers Association), the Consumer Product Safety Commission (CPSC) and other U.S. federal agencies forced the discontinuance of the Wheel, the top-tube mounted "stick-shift", the "sissy bar", and many other stylized features of children's bicycle designs."
Last edited: Oct 25, 2016
A bike is freedom. Your direction, destination, time, speed, but it's not a freebie, you have to pedal for it.

Rating - 100%
2   0   0
Great find, can't wait to see it brought back the way you want.
I'm not sure about the Coast to Coast Wheel bikes if they only had the one version or not but Huffy offered two versions of The Wheel bike per their 1969 catalog, the painted fender version had the hockey stick chain guard which is what it looks like you have but they also had the drag brake version with chrome fenders that also had the chrome flaming stack chain guard. Here's a pic of the one I restored for the MBBO4 last year.

Rating - 100%
63   0   0
I have that black Troxel seat with the bronze stripe. I just need to find something to use it on.
Visit my build gallery: Crash's Build Page
L

Where do I locate the serial #?

I know I am wayyyyy late to this conversation, but I have been digging around for more info on the bike and came across this thread.
Thanks all.
Laurie

LATown said:
Where do I locate the serial #?
Click to expand...

Should be stamped on the left (non-drive side) rear dropout.

I saw people put steering wheels on bicycles way back when, but I never understood it except as a ratrod thing.

But a manufacturer actually sold factory made bicycles with steering wheels on them!!

Also I never knew that there was a law about sissy bars?