I bought this years ago, before my daughter could even ride. Strike while the iron is hot, right? Well, it's still slightly too big for her, but I'm too excited about this project not to tackle it. I'm not going to give up too much, but I will say that what I'm about to do has never been done... at least I've never seen it. It was never done, but maybe it should have been, because it's going crazy awesome. 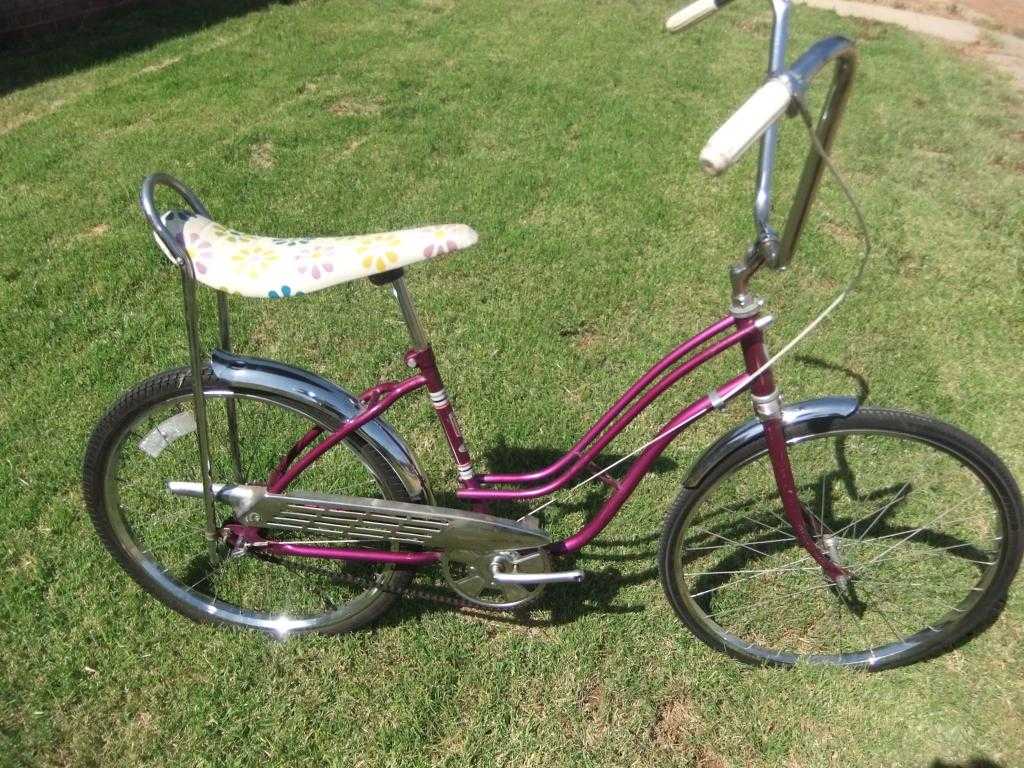 It's 105 degrees outside right now, and probably 115 in my garage, so I'll be working here and there, quitting when I get too sweaty. I'm working nights (5am to 5pm), so working early in the morning is coolest. I got started right away!

I broke the bike out and poked around with some parts getting some ideas. This should clue you in on a direction. 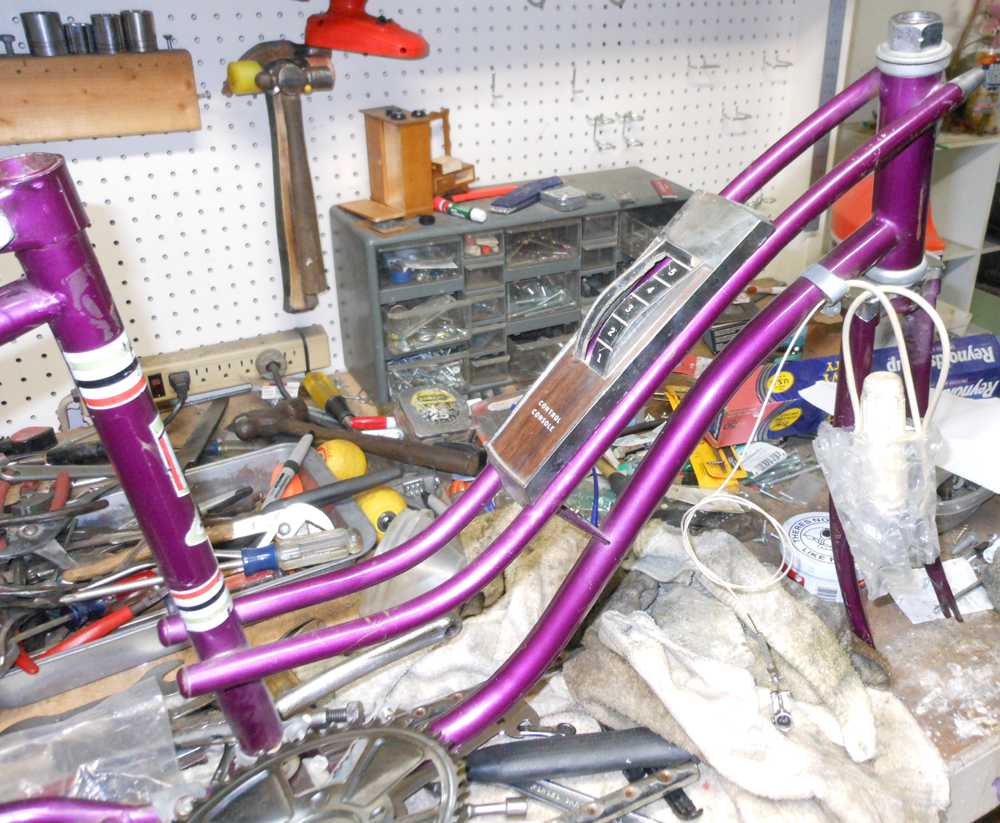 I know that I don't want to use the original rear hub, so after breaking the frame down, I went ahead and spread it.

Needs opened up a bit. 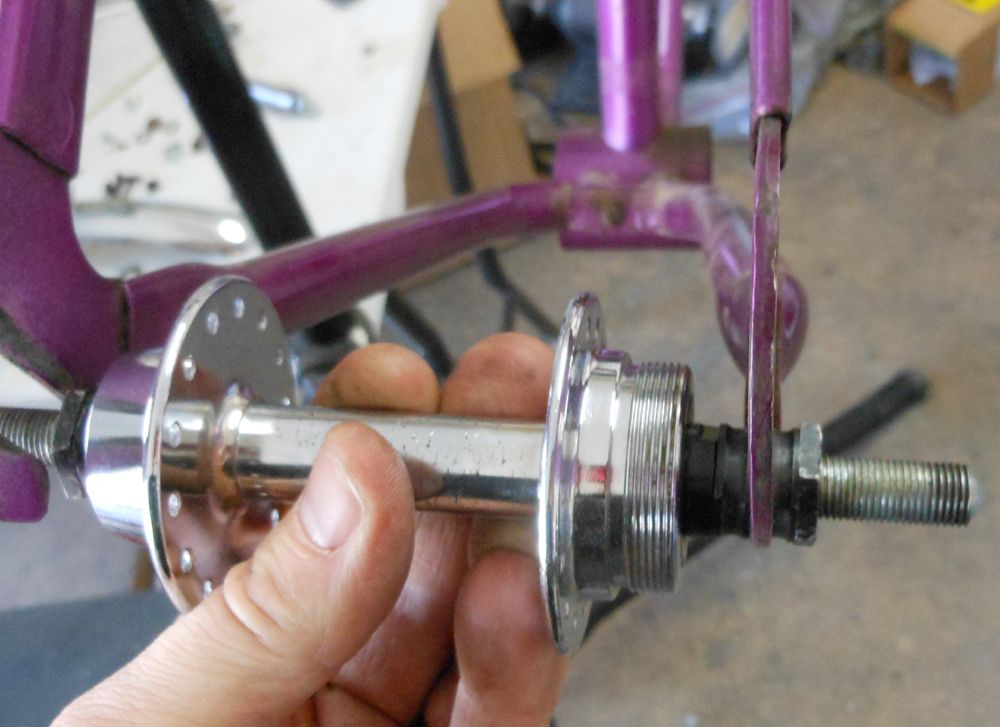 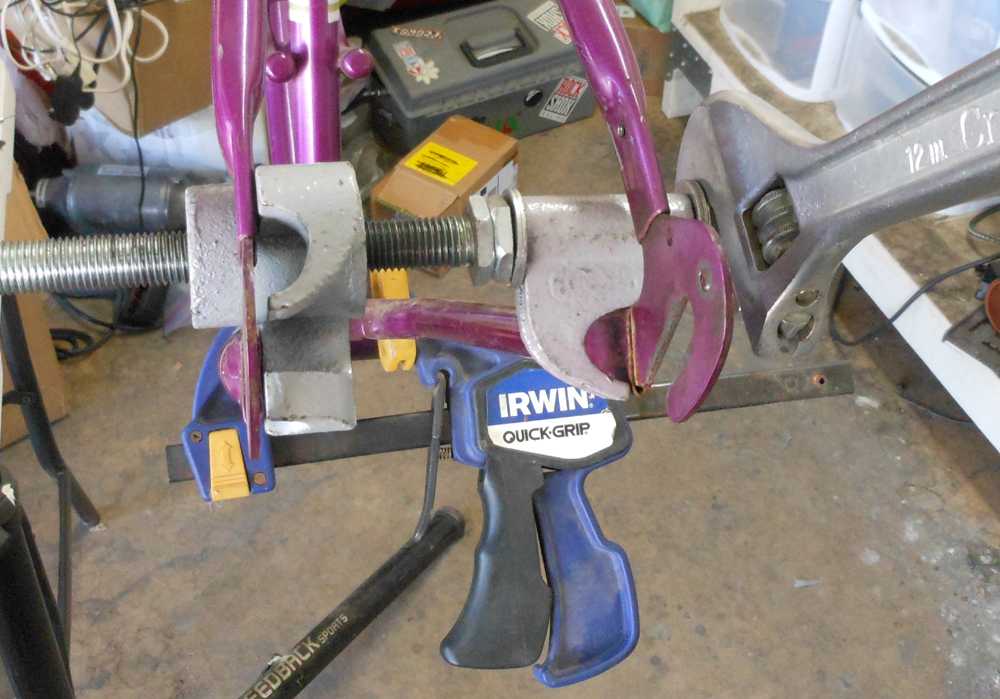 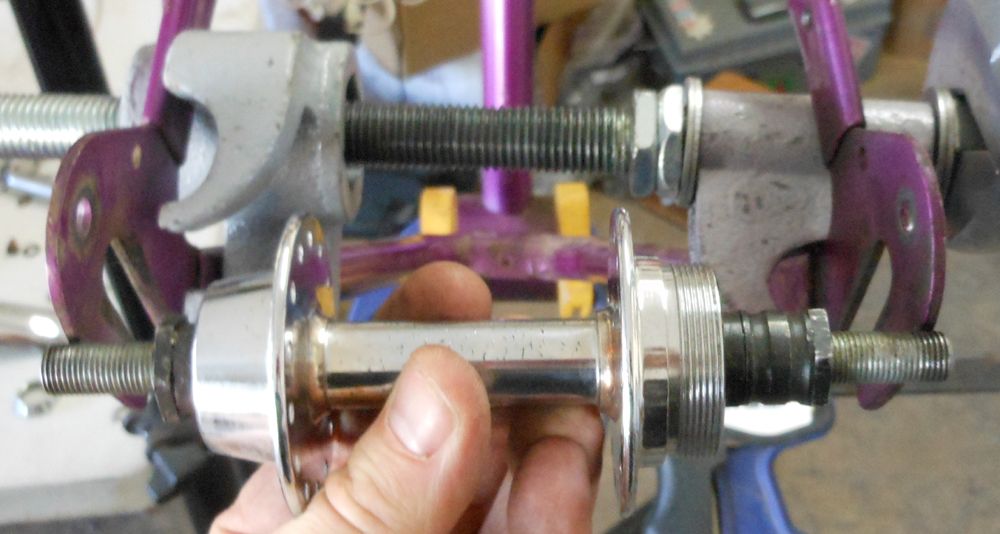 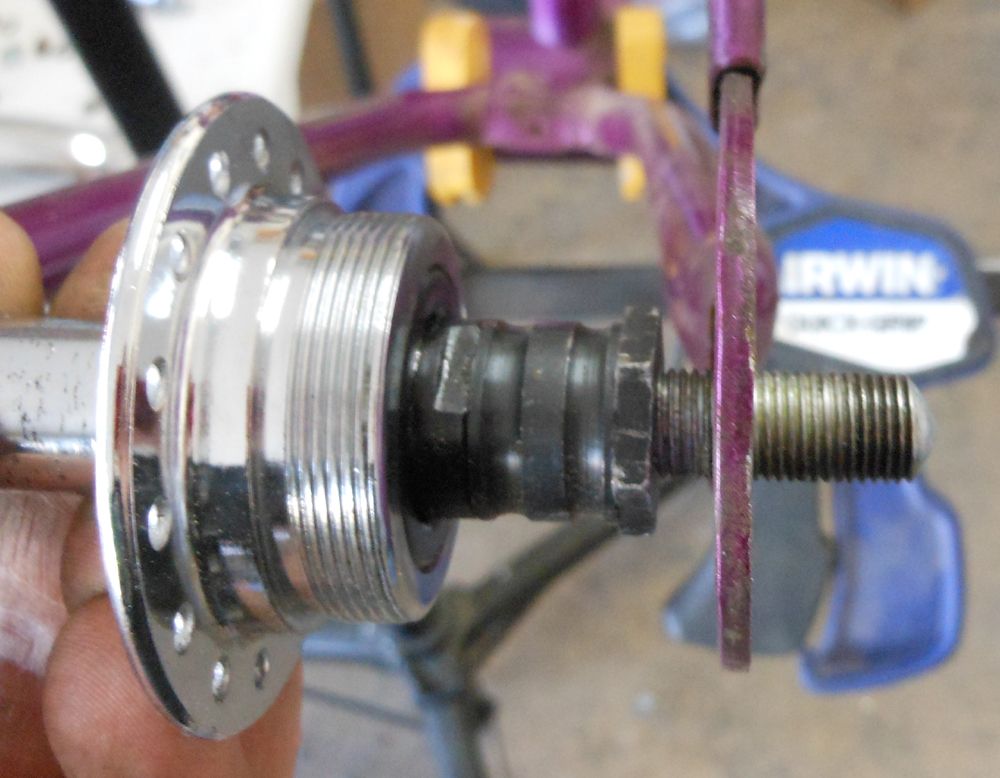 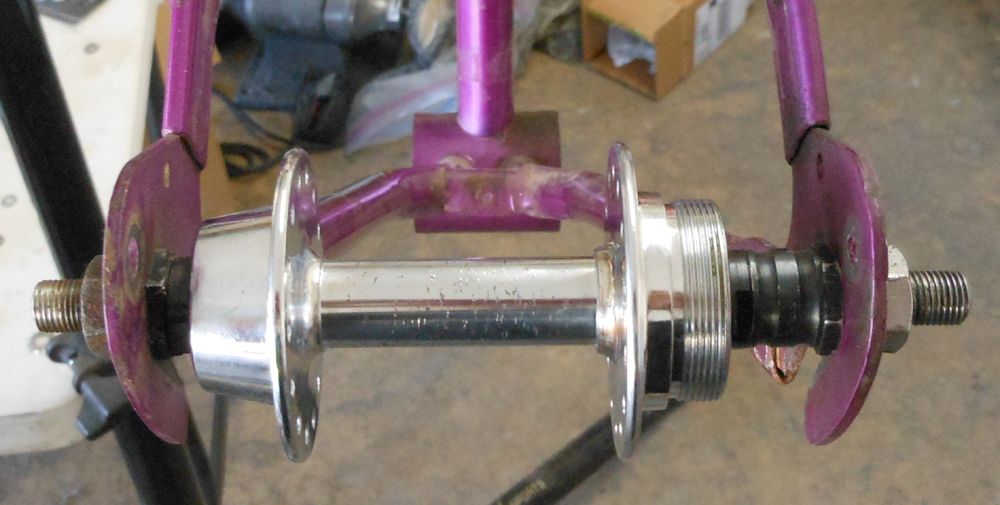 If you've seen my builds from the past, you may notice that I'm a sucker for a 5 speed. So, you may have figured out already that I didn't want my daughter to just have a 3 speed, but a 5 speed. Now, a few manufactures produced a 5 speed for girls. But they usually used either a stem mounted lever shifter, or a twist grip shifter. No one used a frame mounted console shifter. Why? My guess: Not enough interest to justify a smaller production order. These shifters would have to be specifically made to fit a girls frame. So, they didn't do, but I will.

I showed you a Huffy single stick console on the frame. I was originally going to modify that console to have it curve with the frame since it sits on top. However, single stick consoles are becoming increasingly hard to find. So, modifying one to fit the curve would mean it would be unusable. So I decided against it.

So here's how my brain works: I didn't want to modify a single stick because the curve would be difficult to get right in the plastic. I just so happen to have a Twin Stick that I have been collecting parts for now for a couple of years. If you know anything about Huffy, you will know that a Twin Stick console is rare, and incredibly expensive if you were lucky enough to have the opportunity to buy one. I once learned of a nice one for sale for $500. I saw a really crusty/rusty one on Ebay for $200. It sold in 15 minutes. So, I was lucky to trade for some broke down guts.

Here's the guts as I got them. 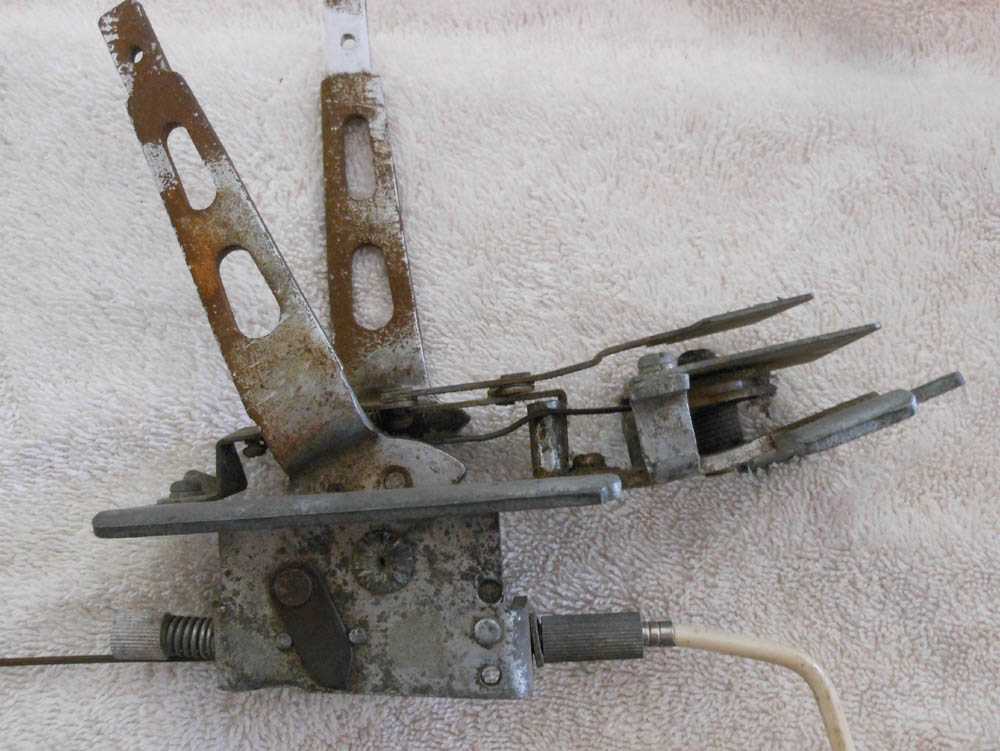 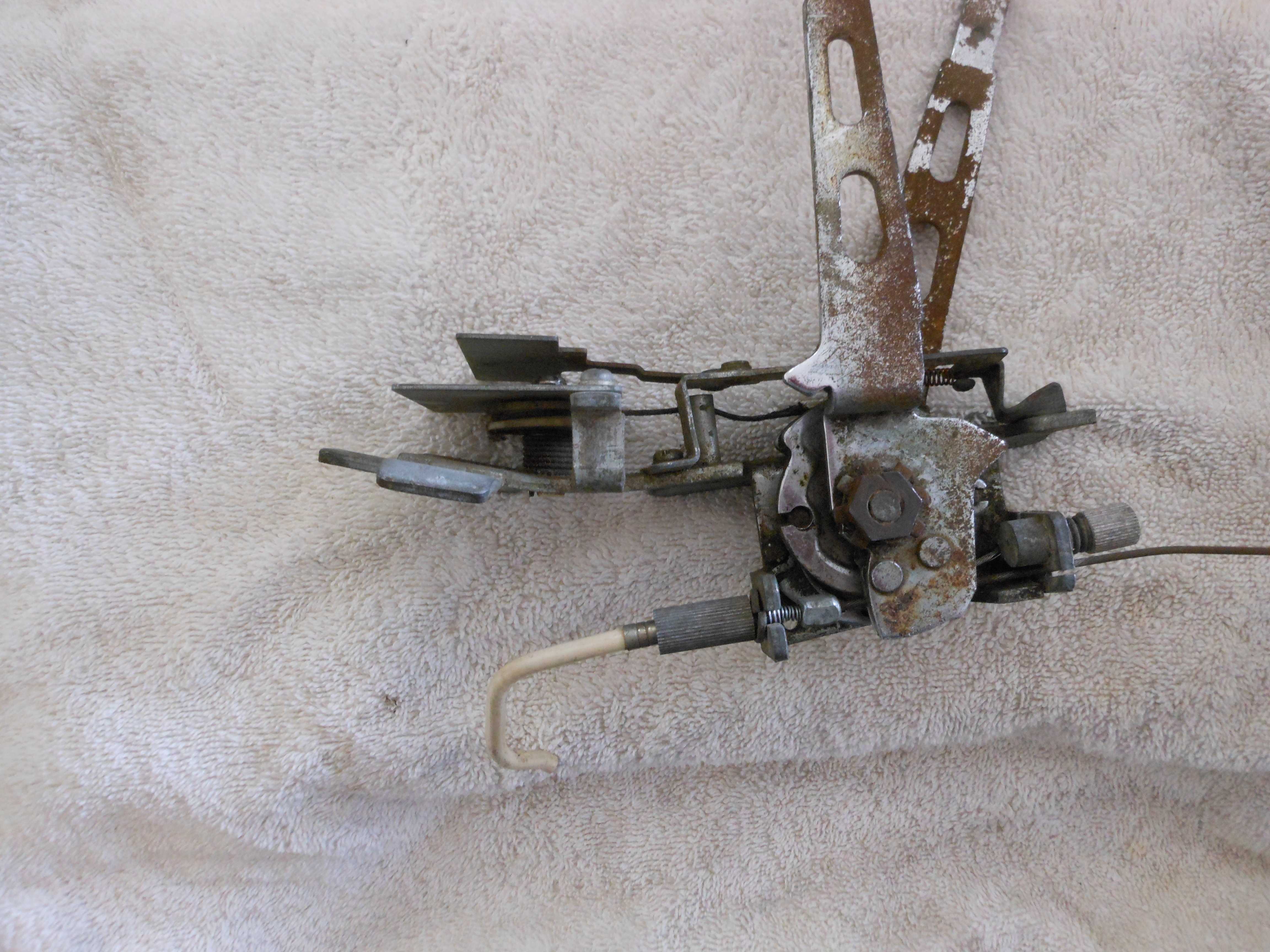 I should have taken a picture of the top, but the two decals were gone. The shifting didn't work, and the brake didn't work either I had to figure everything out.
Visit my build gallery: Crash's Build Page

While the guts were damaged, bent, and confusing, I managed to find a console. I wish I had taken a "before" picture, but believe me that the chrome finish looked awful, and someone, for some unknown yet incredibly frustrating reason, someone had cut a couple chunks out of the side, and had removed the lower front of the center. I'd love to know why, but anyway.

Let me say this, I did start this a couple months ago. I didn't think I was going to use this console for this project when I started. My main motivator was the chrome. I found a source for plastic chrome, and I wanted to try it out. I had been looking for a good source for years. I was excited when I found one. So if I started this console restoration months ago, how can I justify it using it for this MBBO? Because if I had finished the console restoration, then just used a console I had on hand, to me, it's the same as someone who has a NOS shifter that they just pull off a shelf to use. Mine is just taking a lot more work and time. So...


I threw the console into a tub of muriatic acid. This is how it came out.

The dark spots are the gouges and scratches. But you can see the chunk missing from the side.

Here's the front, which is missing that center piece. You should see two round cutaways for the twin tubes. 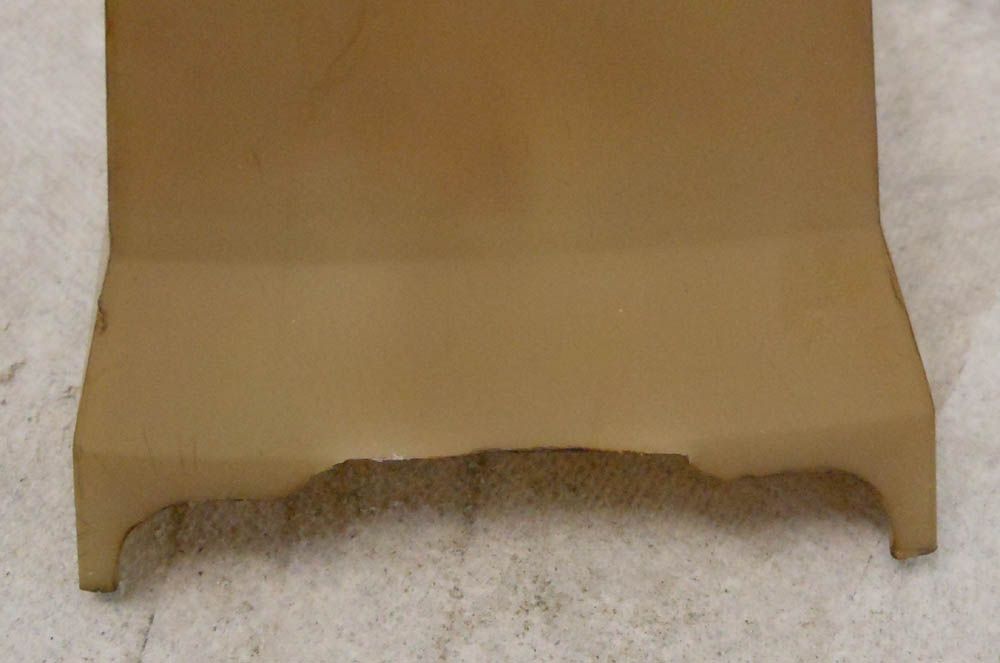 And the missing side chunks. 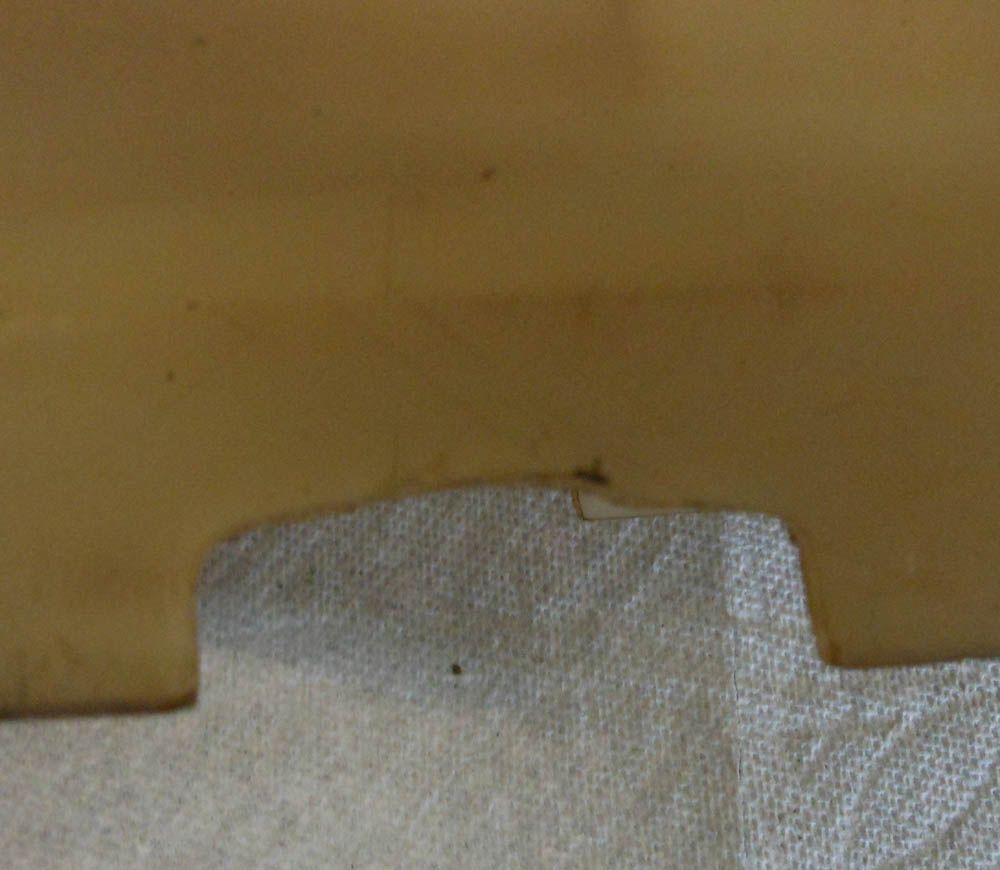 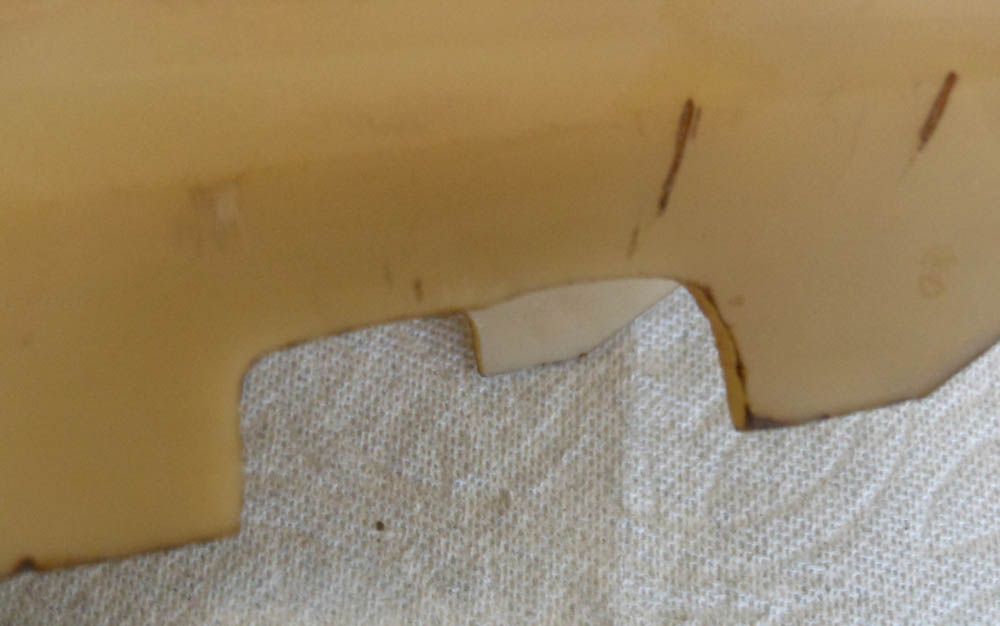 I removed the view glass. It was scuffed up and hard to see through. 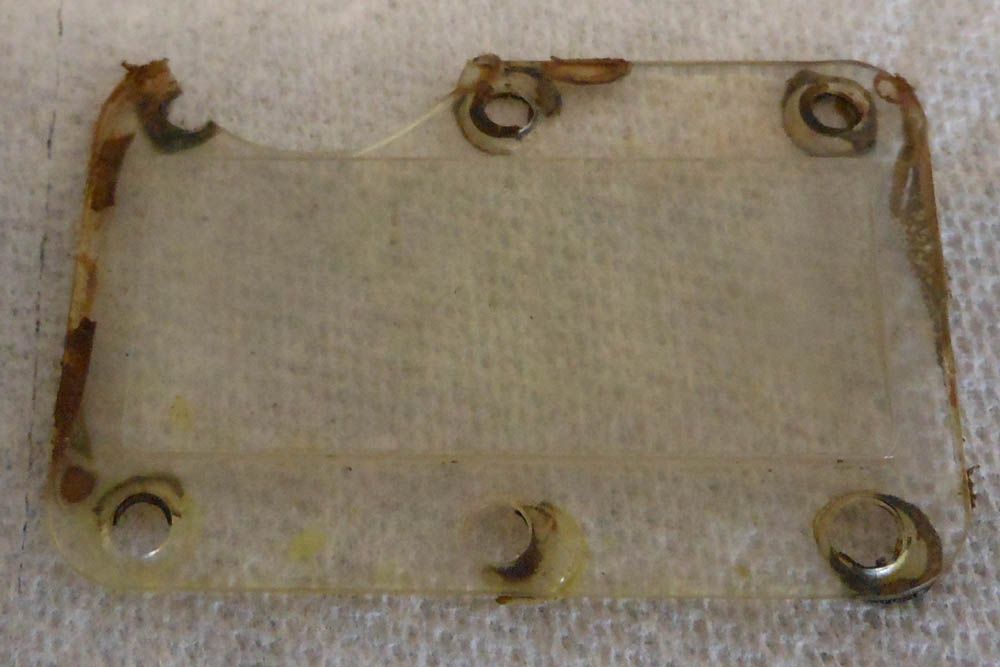 So... I got to restoring...
Visit my build gallery: Crash's Build Page

I bought a panel of plexiglass that is close to the same thickness as the console. 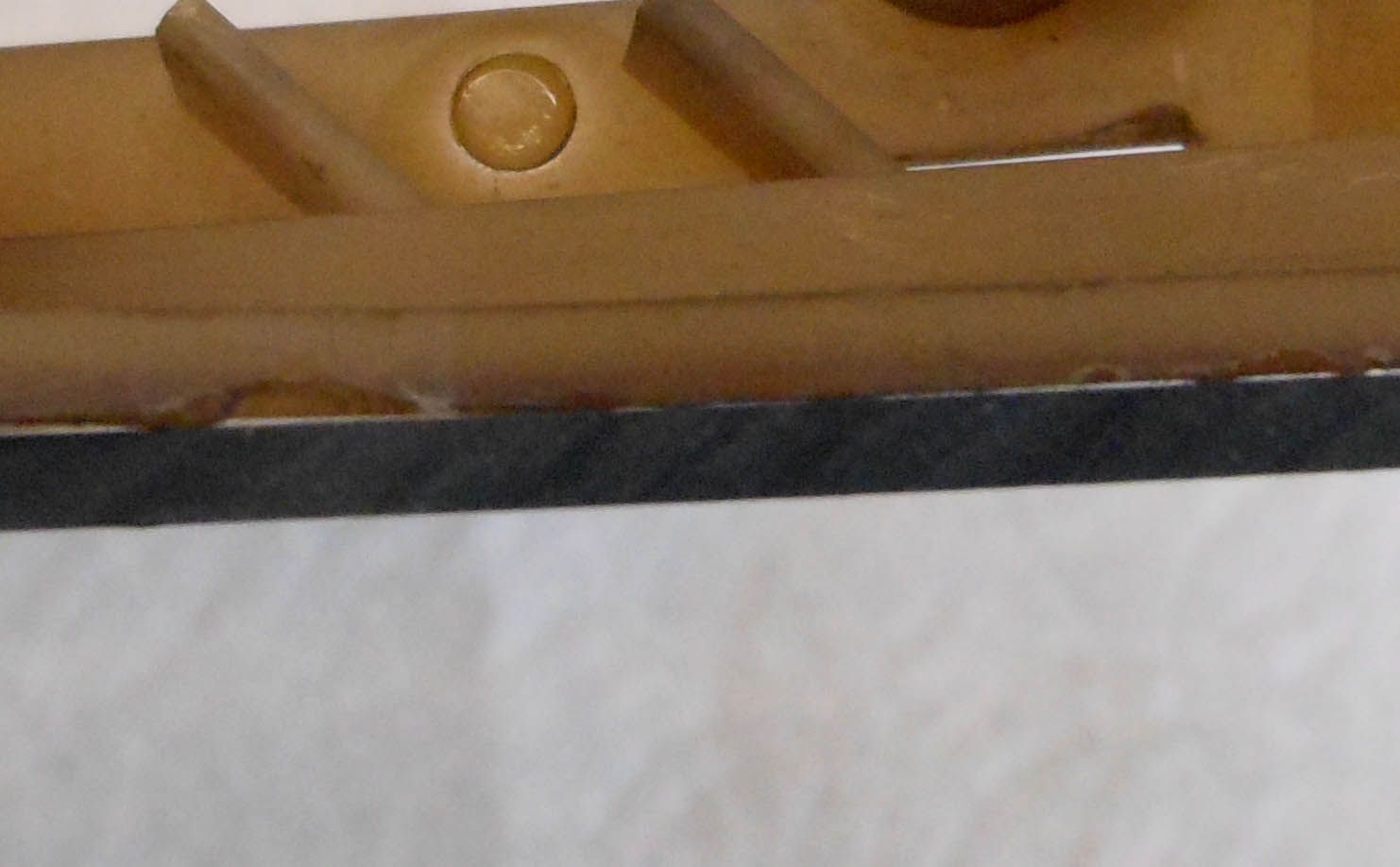 I cleaned up the missing chunks

Then I cut and shaped pieces to fit the missing areas. 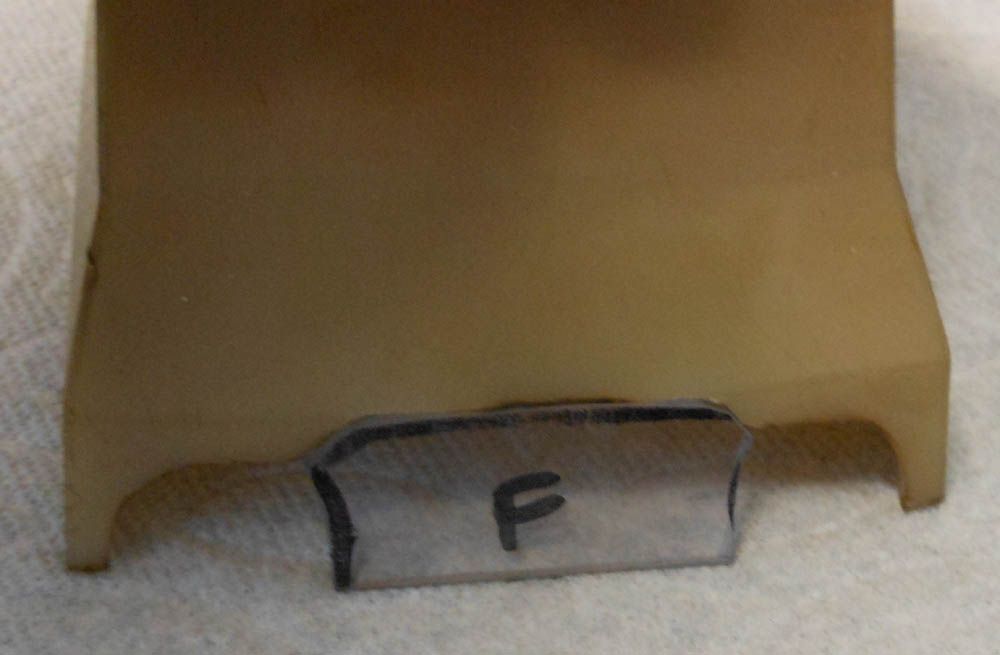 Then, epoxy, sanding, filler, then more sanding. Lots and lots of sanding. The chromer warned me that any flaw would be highlighted by the chrome. So I sanded all the way down to 1200 grit to make it as smooth as I could. 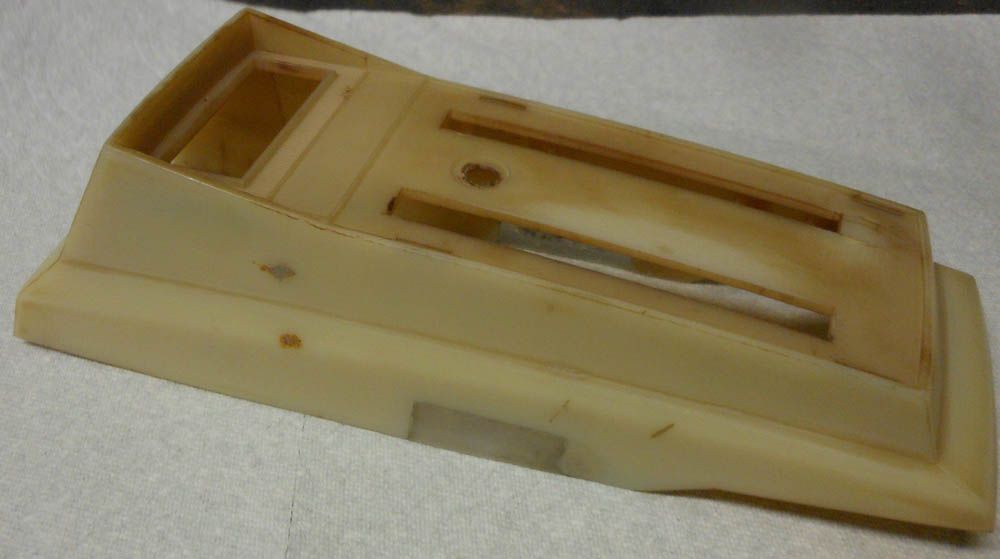 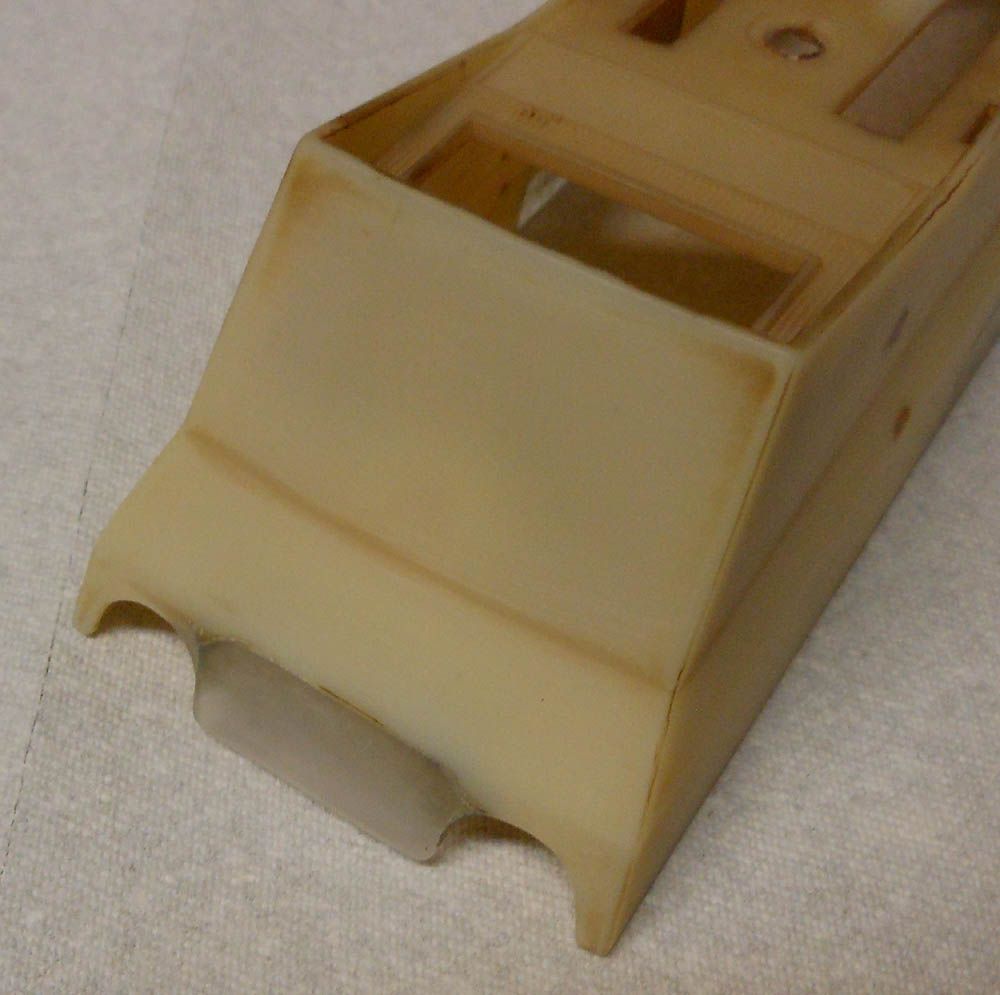 Once I was happy with it, off to the chromer it went. I'm glad I did it early, because today I finally got it back. He had it for months! The heat affected him being able to complete the job, so I patiently waited. Tonight, I unwrapped the results...
Visit my build gallery: Crash's Build Page I'm amazed! It's fantastic! However, the chromer was right. While I couldn't see it before it was chromed, there is the slightest lines where the patches were added. 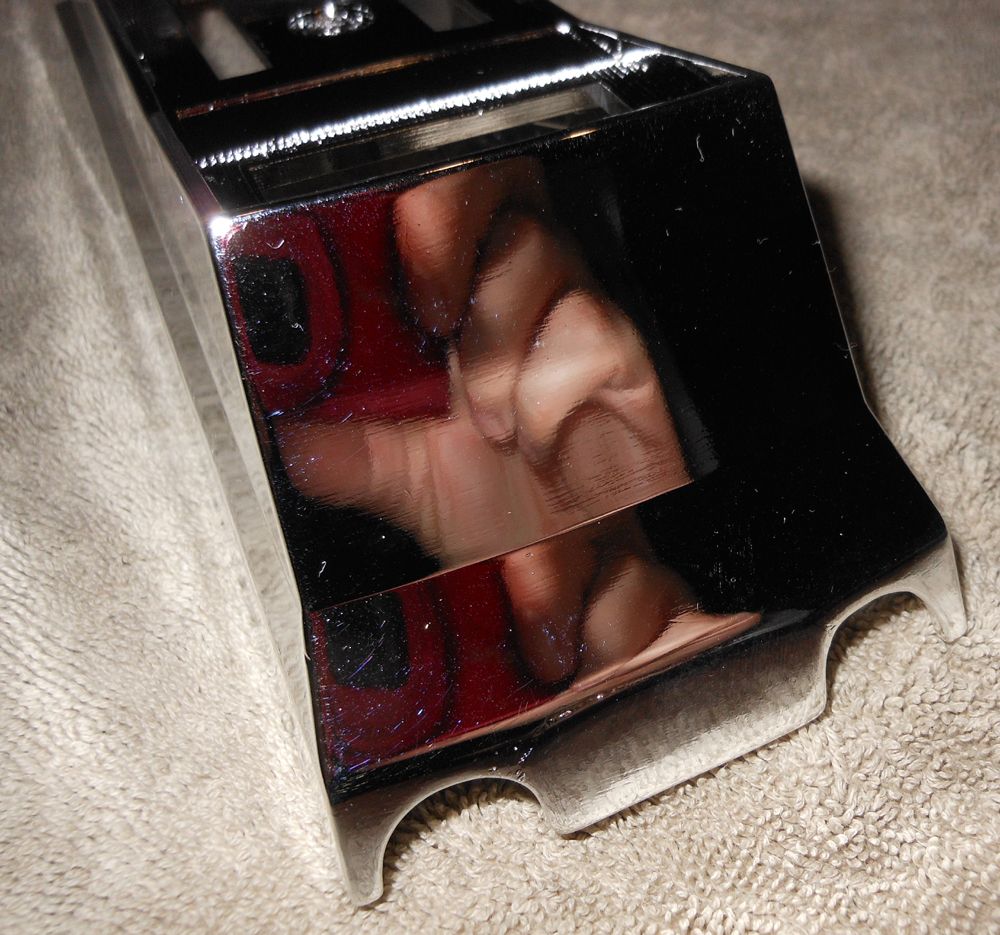 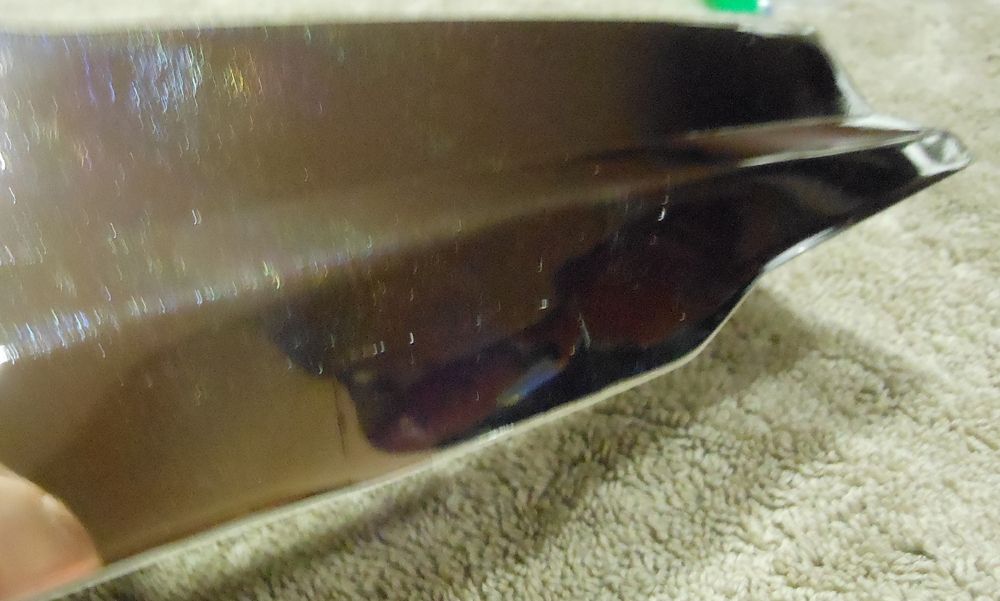 Now I've got to make all this work!
Visit my build gallery: Crash's Build Page

Awesome!
I hate to think what the chroming process cost, was it as expensive as what I think?
MY INTRO AND BUILD LINKS/"HOW-TO" LINKS:
https://www.ratrodbikes.com/forum/index.php?threads/lukethejokers-intro-and-links-big-moves.65513/​

LukeTheJoker said:
Awesome!
I hate to think what the chroming process cost, was it as expensive as what I think?
Click to expand...

Surprisingly, no. A few years ago I found a guy, but he was going to charge me about $300 for a console this size, so I kept looking. This guy I found did this console for under $100.
Visit my build gallery: Crash's Build Page

CRASH said:
Surprisingly, no. A few years ago I found a guy, but he was going to charge me about $300 for a console this size, so I kept looking. This guy I found did this console for under $100.
Click to expand...

That is less than I expected, agreed $300 is not viable, but $100 to bring a rare item back to life is not bad!
MY INTRO AND BUILD LINKS/"HOW-TO" LINKS:
https://www.ratrodbikes.com/forum/index.php?threads/lukethejokers-intro-and-links-big-moves.65513/​

I got the guts in trade, but there's no such thing as a free shifter.
Visit my build gallery: Crash's Build Page

I got the guts in trade, but there's no such thing as a free shifter.
Click to expand...

Wow, that looks great! Awesome work on the shifter!

Who was the chrome plater for the plastic?
Always looking for cool vintage muscle bike accessories...

I've learned a valuable lesson you would think should have been obvious: Don't make assumptions when it comes to customizing. Months ago I set the shifter console on the frame to make sure that it would fit correctly without modification. It did, so I set out to fix the console, which I have already showed you. I assumed that the guts would fit inside without a problem. Shortly after I got it I tore it apart. It's a complicated build, so I didn't put it together until now. Well, as you can imagine...

So, I took the base and started modifying it to fit. 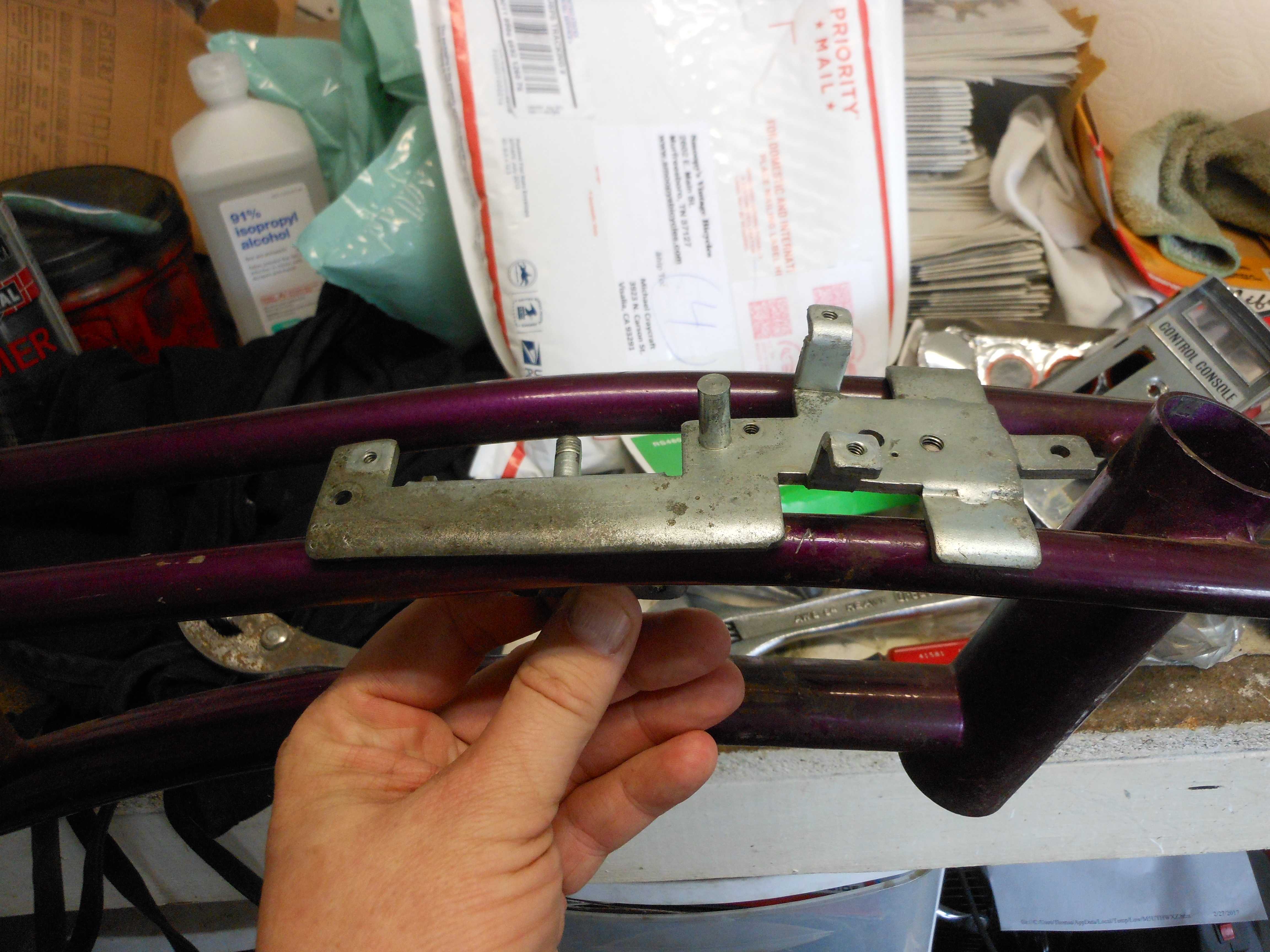 When I got the guts, they came with no attaching hardware. I have seen the plate that's come Twin Sticks, and I looked for one, but never found one. So, I built my own out of a piece of steel. I'll paint it to match the frame. 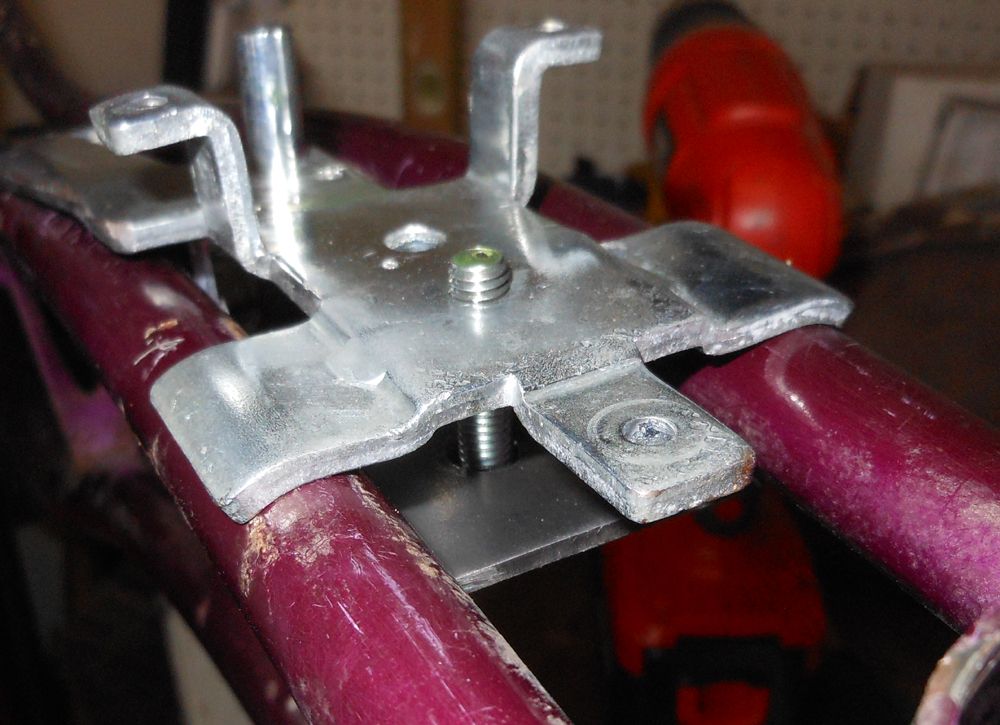 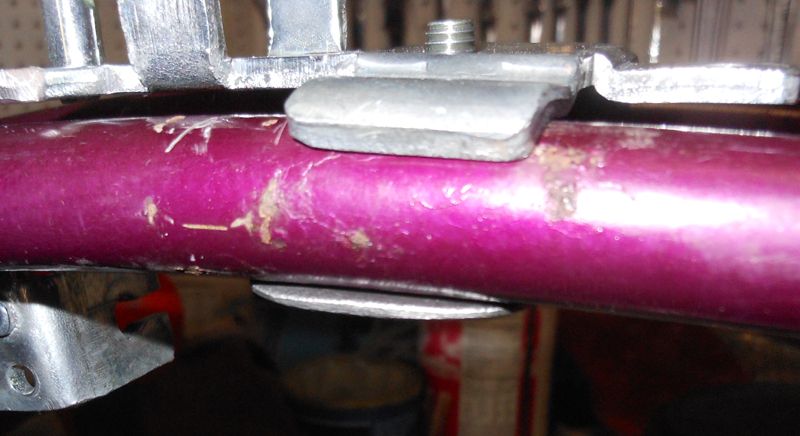 I had to take a break to head to the place where I sand blast. I took my frames to blast out the nooks and crannies. I'll hit the rest with a wire wheel and prep the frames for primer.
Visit my build gallery: Crash's Build Page

It took me a little while to figure out the intricate mechanics of the Twin Stick. It's actually a really cool shifter. I have a lot more appreciation for this shifter now that I've built it. For the first time in 45-ish years, it's back in action. 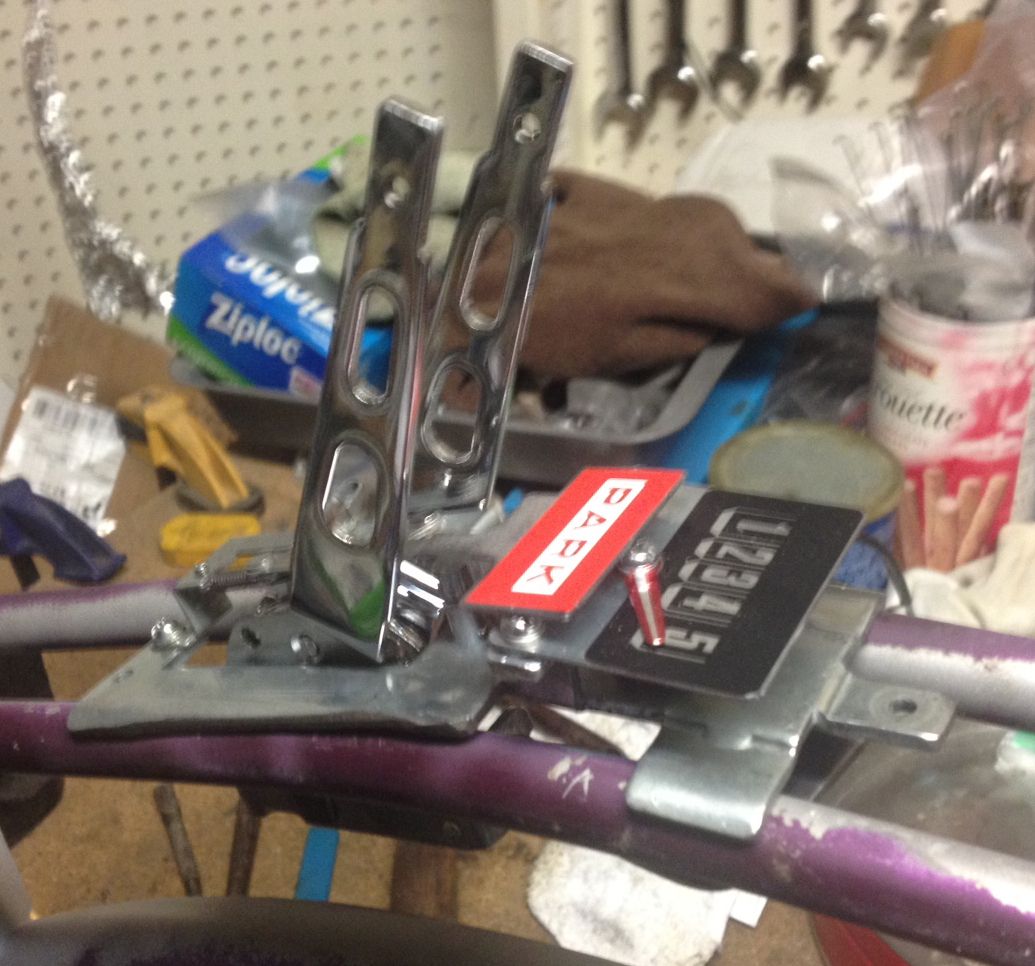 So here's the consequence of my assumptions. Due to the modifying the base to get it to conform to the frame, when I set the console over the guts, it hits, and the guts don't work.

Where the back end should be flush with the frame, setting on it, it's setting quite a bit up. 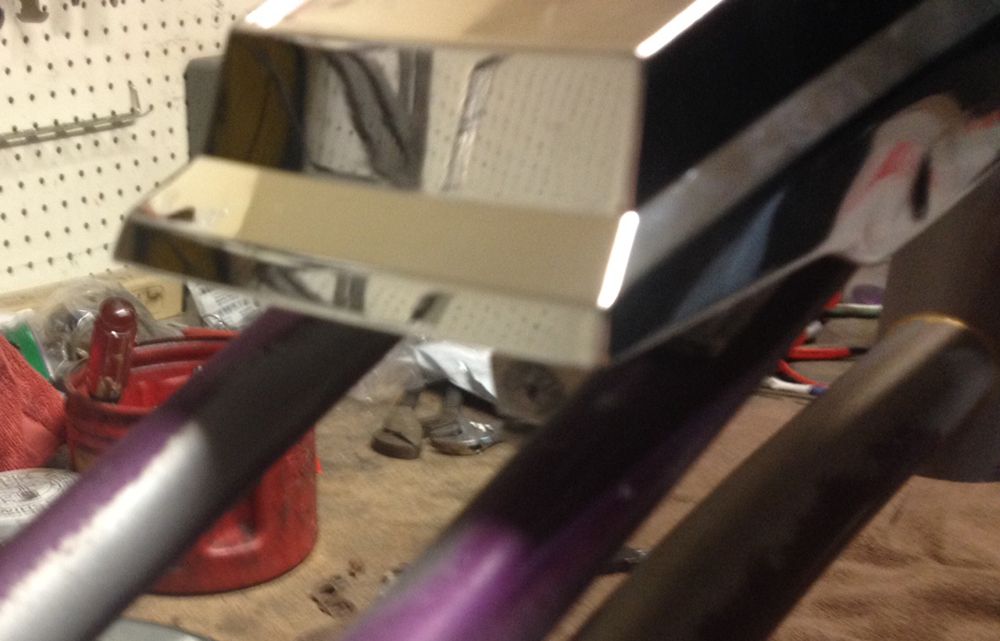 How about a piece of that black textured plastic sheet to form some sort of a skirt? IMO, it would still look nearly factory correct. 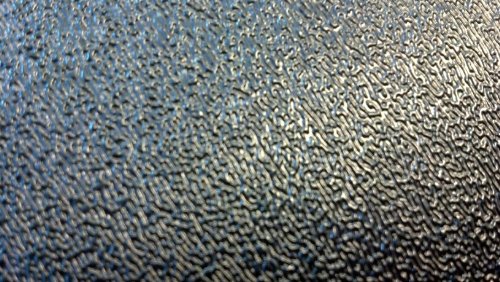 I tinkered around, looking for a solution that would work. Option 1) Modify the console again, add some height to the walls, send it back to get chromed again. Option 2) Take the 'Parking Brake' indicator off the assembly, which will lower the height.
I didn't like either option. But I chose option 2 because of money and time, and I thought that modifying the console would make it look weird.

I took the washers off all 3 of these screws to lower the heads. 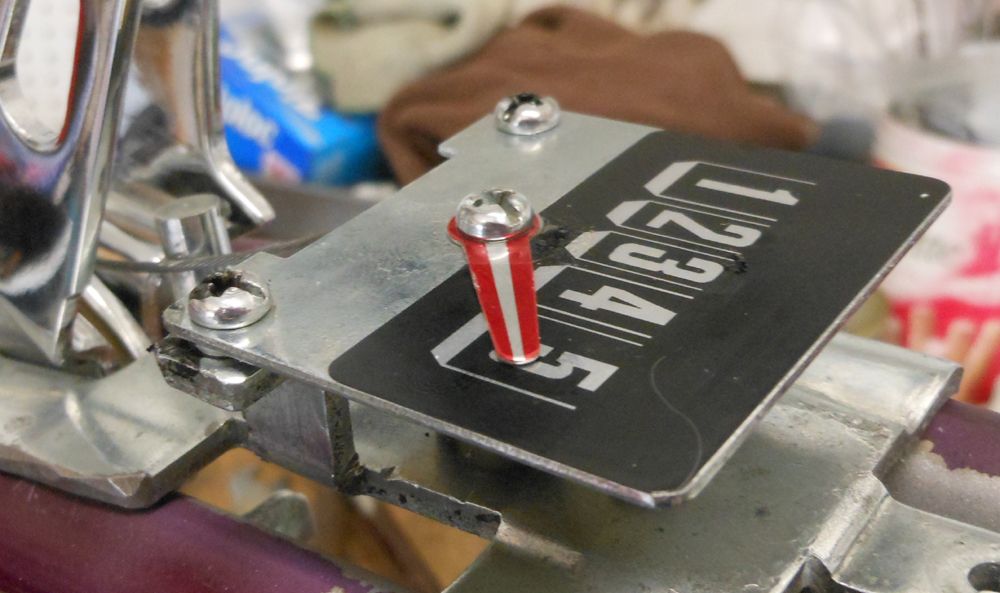 The view glass was already broken, so I just opened it up a little more to clear the shift indicator screw head. There was also a tab on the inside of the console that I smoothed out. 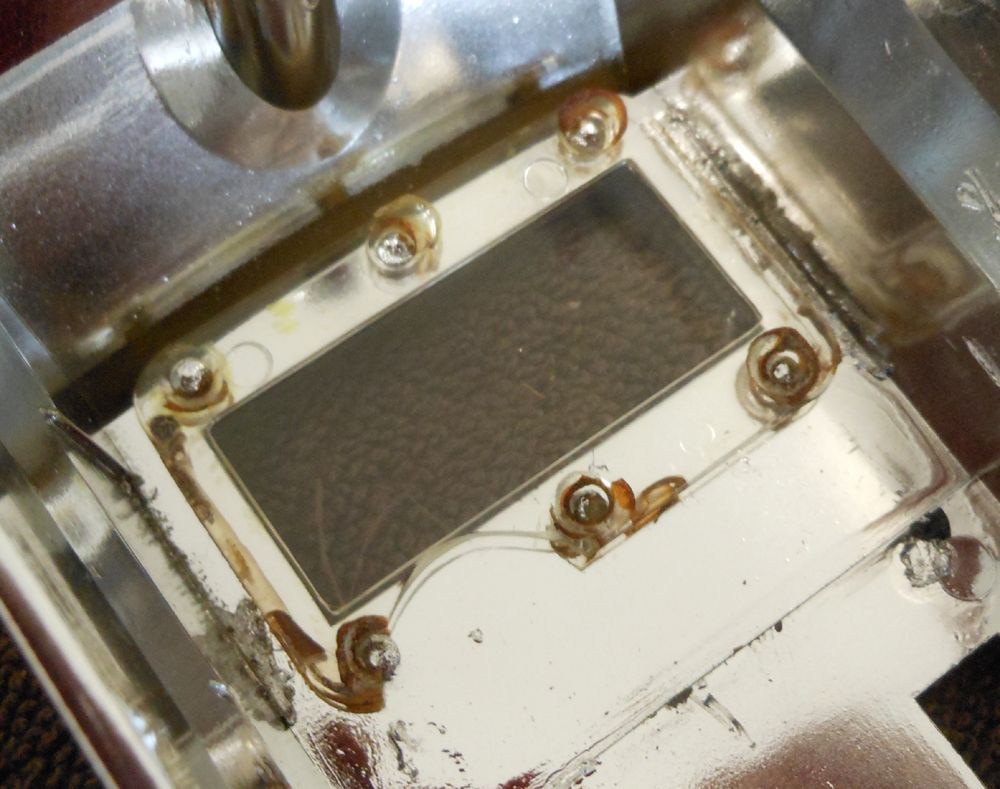 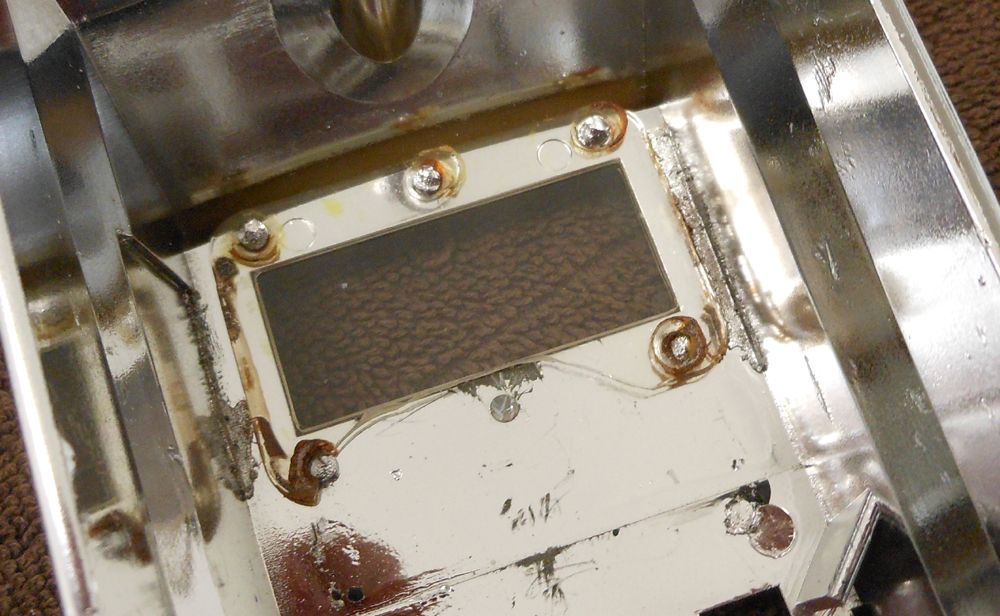 I had to file down the rear mounting post, and all that made for this: 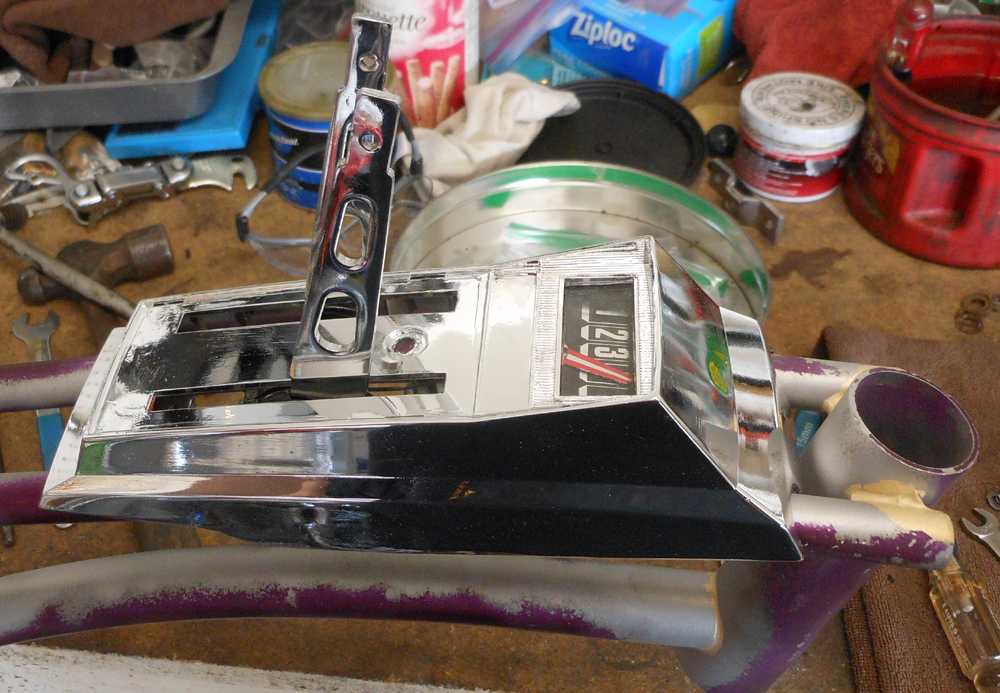 The biggest loss in this is that when she will pull the parking handle, there won't be a 'PARK' plate that fills the indicator window.