Rating - 0%
0   0   0
I didn’t know about spray-arc either, in relation to structural welding, but I knew it was used to do things like build up bearing surfaces and crankshafts. An old welder taught me how to do this 25 years ago.

We used a Lincoln suitcase wire feeder with a WW-2 era Lincoln 300 transformer for the power. We were able to crank the wire feed and the heat virtually all the way up, and weld very fast.

How you knew you had all the settings just right, aside from the beautiful weld, was that it suddenly got quiet!

He got a clean beautiful weld with no slag, and it was silent. You heard the machine run, but you didn’t hear the sizzling-popping of a typical weld.

I don’t know why that is, but maybe it has something to do with having oxygen in the gas? The welding needed very little cleanup. Basically they washed it, and etched it, and hot-dipped it.

The only time you got any dingleberries was at the very start of a weld, or if you got sloppy. I’ve never seen anything like it before or since, except for TIG welding, and it was like 5 times as fast as any Tig welder.

Rating - 0%
0   0   0
It's quite daunting the different welding methods out there, my mate is a boilermaker and is currently working on high rises, he has to use a temperature gauge after each weld so the I beams don't overheat and warp, I said WOW, He said nah its real easy, just do the weld and plonk the temp guage on the hot weld and just wait till it cools, so easy then repeat 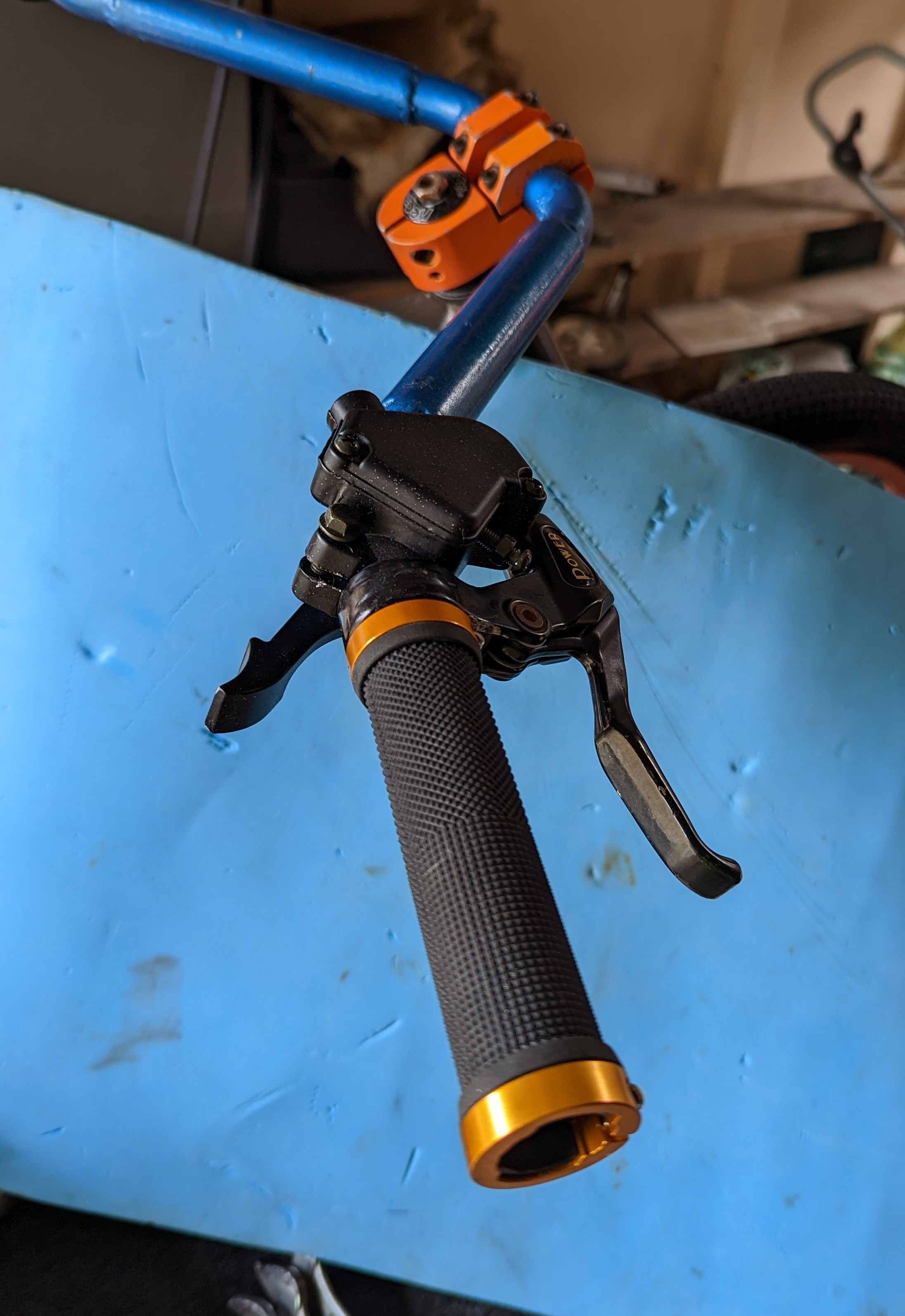 A quick look around the shed and I managed to rob these bars off the sons old BMX.
I rekon they look grand mounted from the support bar and give me the look im after.
So now its just cables n painting.
So close but another 35'c today in Brisbane so the shops closed now. 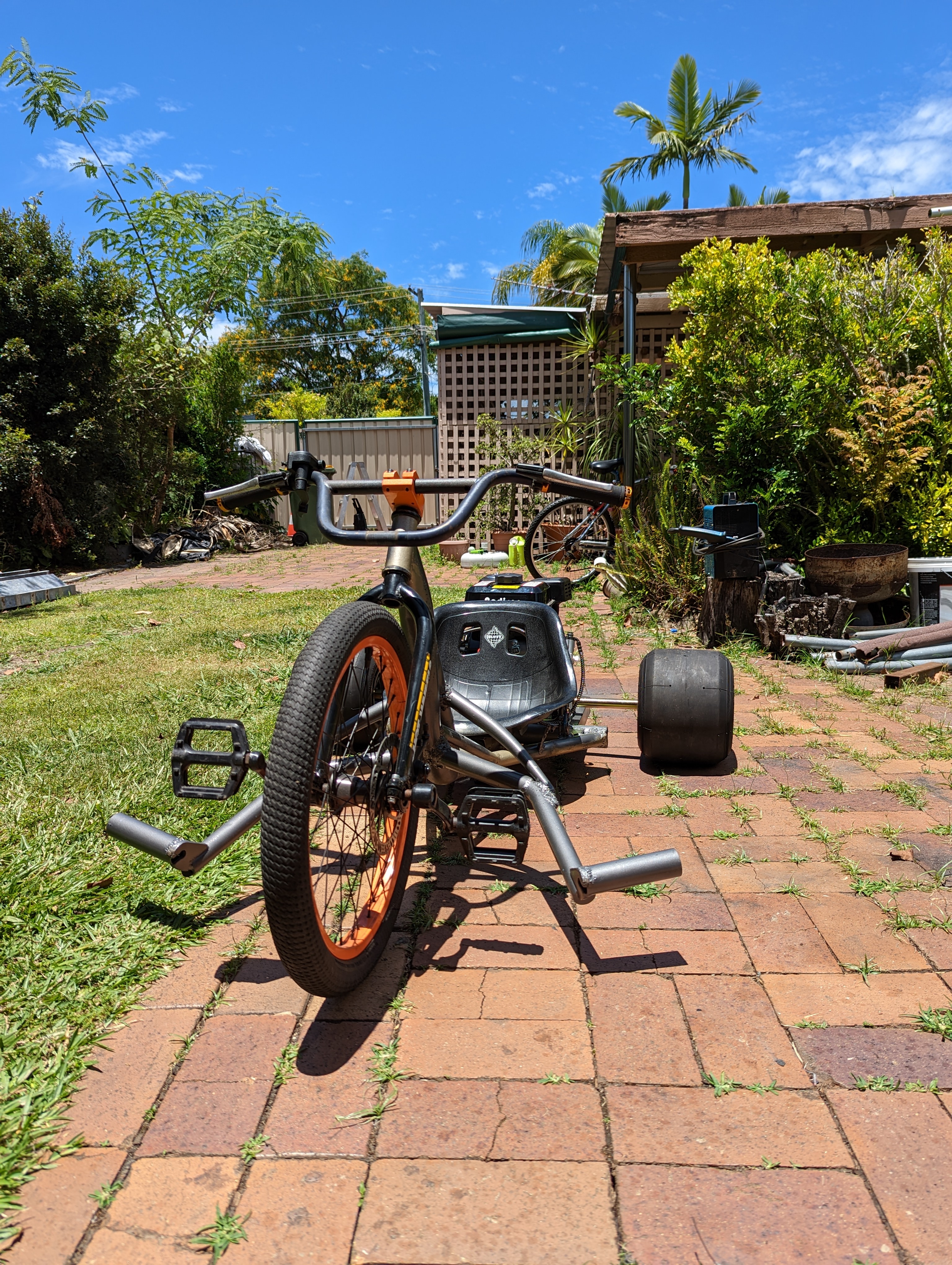 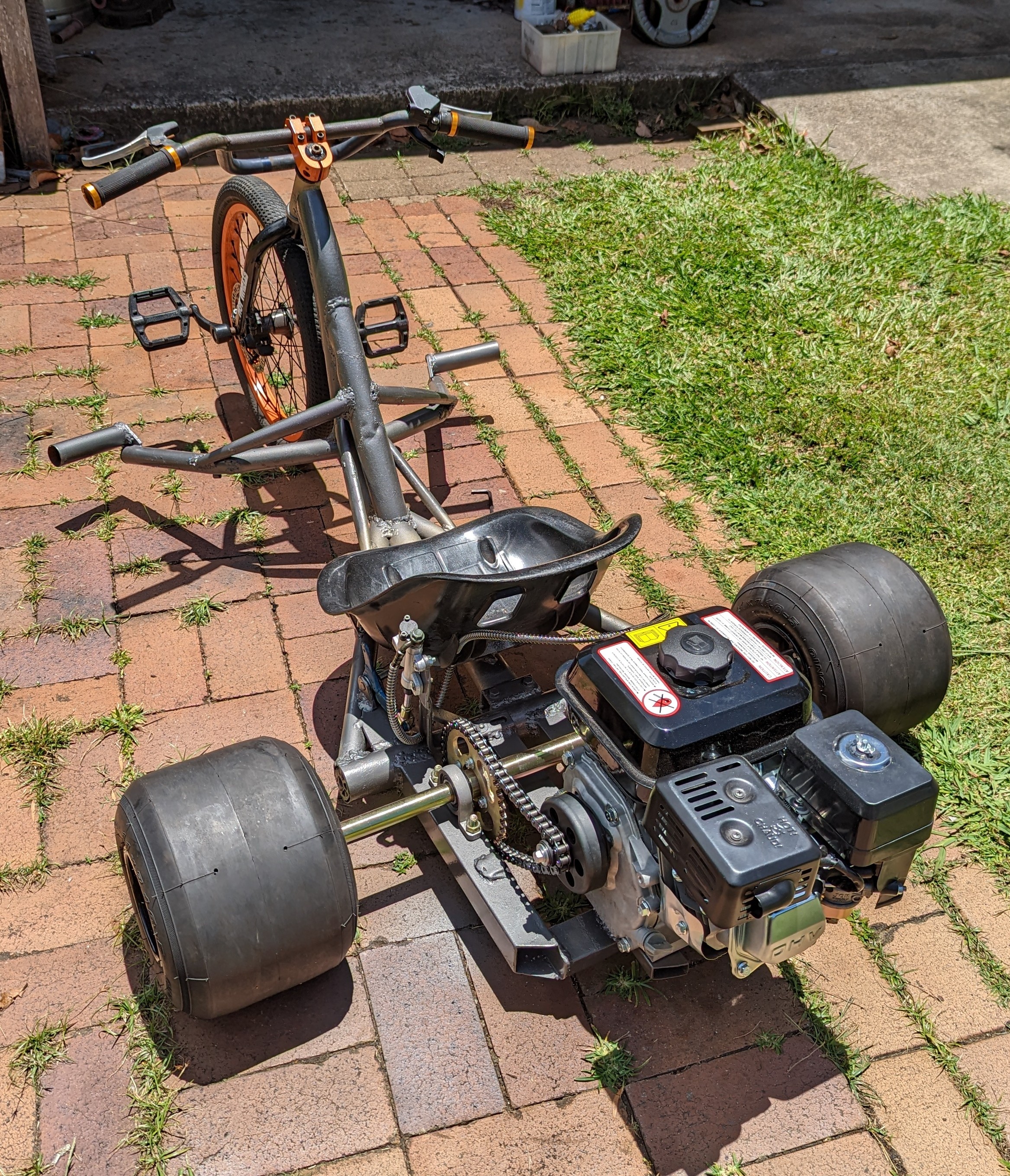 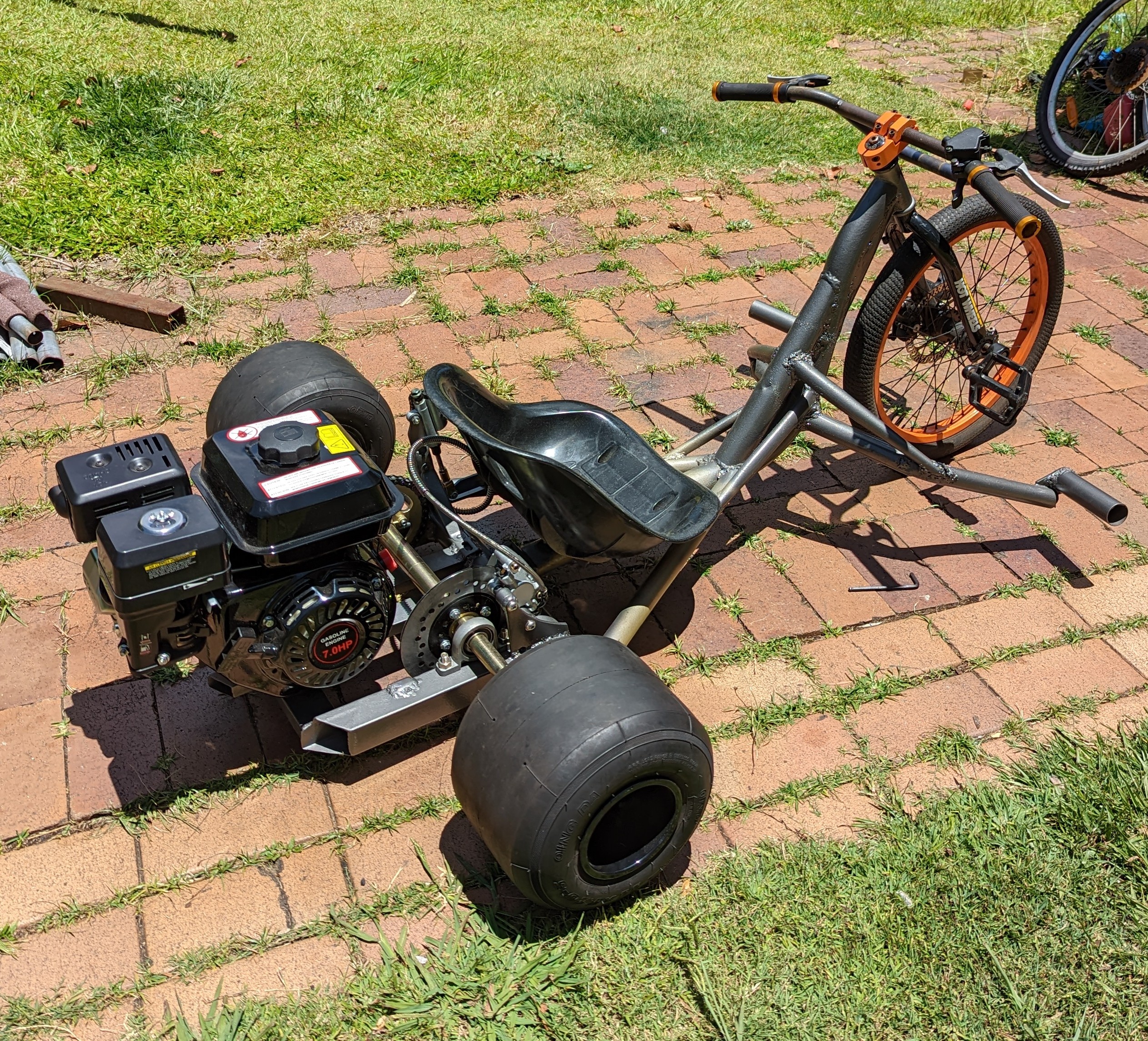 ive forgotten something.... I haven't got any adjustment in the chain so im considering running a tensioner on the top return section, then that should be it, testing and if that's good then strip it, tidy the disastrous welds and paint it , to be honest the end look wont too different than what you see here, there will be no undercoat, there will be no sanding back or bogging to pretty everything up, its just grind some welds out, hit em again and sanding disc to smooth, a very modern tool also called a "wire brush" is then used to prepare for the "Son Of Kradus Paint Booth" which is on the back lawn. and in case you havnt guessed already ive chosen charcoal grey in the hammertone finish, I quite like it, a break from the blue..... speaking of which can anyone spy the photo bomb by the F6 project, ya can only see the back wheel and a giveaway of the trim.

Rating - 0%
0   0   0
Why do you need a chain adjuster? Cannot you just slot the motor mount holes and move the motor back a quarter of an inch?

Ulu said:
Why do you need a chain adjuster? Cannot you just slot the motor mount holes and move the motor back a quarter of an inch?
Click to expand...

Ive done it again, ive shaped the back and angled off the supports so now I can only safely slot em back 10mm, ive somehow managed to have the motor sitting a wee bit further back than I thought but it'll allow a link to be removed if needed, would you believe I measured the motor and axle distance with that incorrect clutch where the chain didnt hug the sproket, well the new sproket fits snuggly but its allowed that wee bit of slack to appear and cause this last drama.
The chain is very short and the thing will only get ridden for limited amounts of time so I'm actually thinking There may be wear and tear but not really significant due to the low HP and short chain.
Ahhhhh Bugger it! ill slot the holes, if I have to i'll add a tensioner later, it'll literally take 5 mins to throw one on!,...... hang on a minute..if I cut the holes bigger I then cant remove the holes if need be, the tensioner can be cut off in seconds.... an adjuster...slots.... OMG wheres the wife its happening again!
Last edited: Nov 21, 2022

Rating - 0%
0   0   0
Ended up cutting slots.
Made a heck of a mess with it so used some 3mm stainless flat bar, dilled holes and these make great load spreading washers. Bit rough but it's all underneath, 4 of them.
Everything is bolted together tight, she's a solid rig and im awaiting the throttle cable to finish. 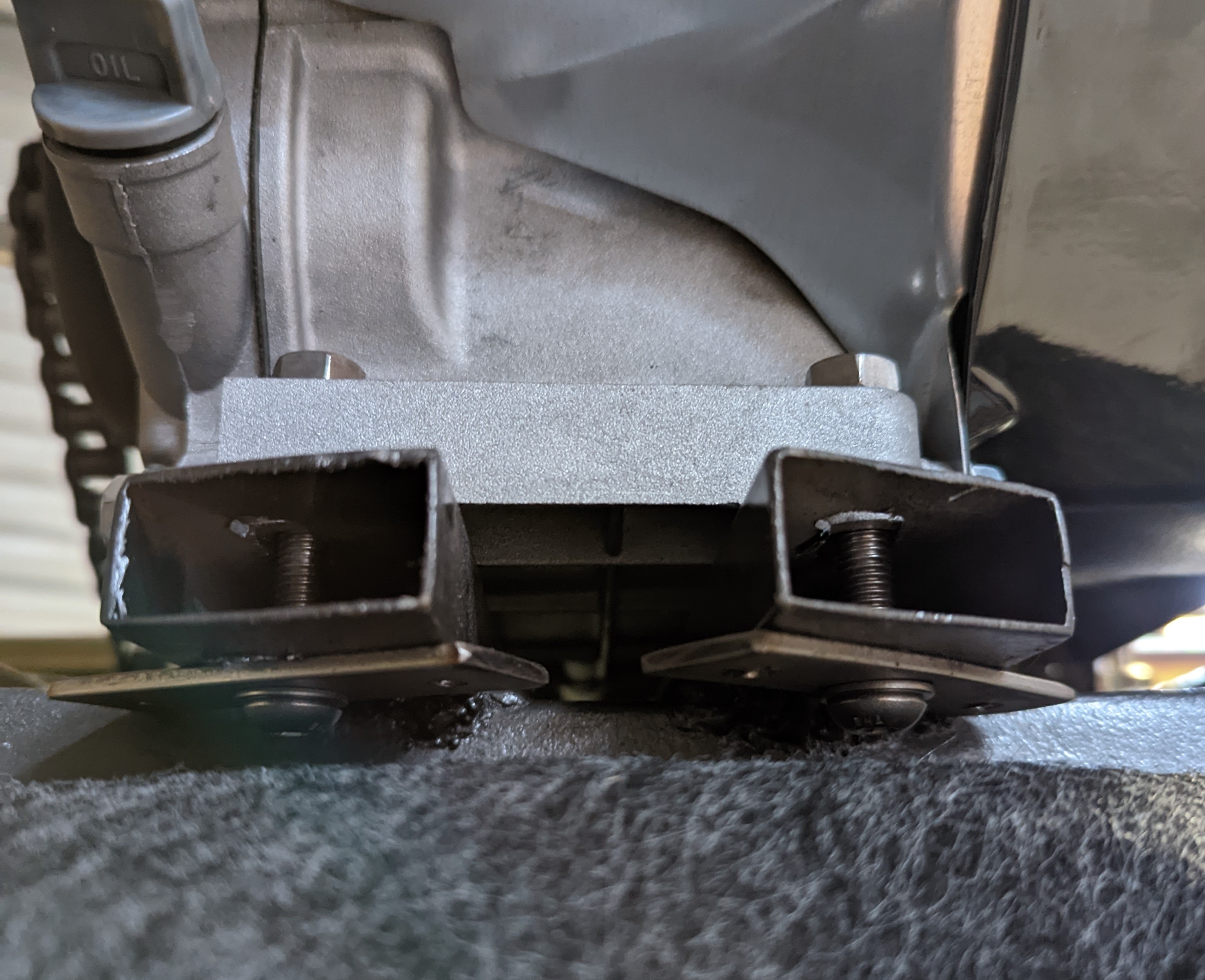 Rating - 0%
0   0   0
Well I stripped the machine and ground back a couple of the worst welds when I said to my self..... "Stop this right now " getting carried away, theres only so much you can do to dress up a mutton as lamb and with that I made myself happy with what's unfolded and started the undercoat, final and clear, all in the 1 quickie can hammerton metal finish. A simple but effective paint job that's fit for purpose.
As for the color choice.... Well all im gonna say is this is what happens when you have a half can of charcoal grey and 3/4 of a can of blue, I think it's gonna look quite cool 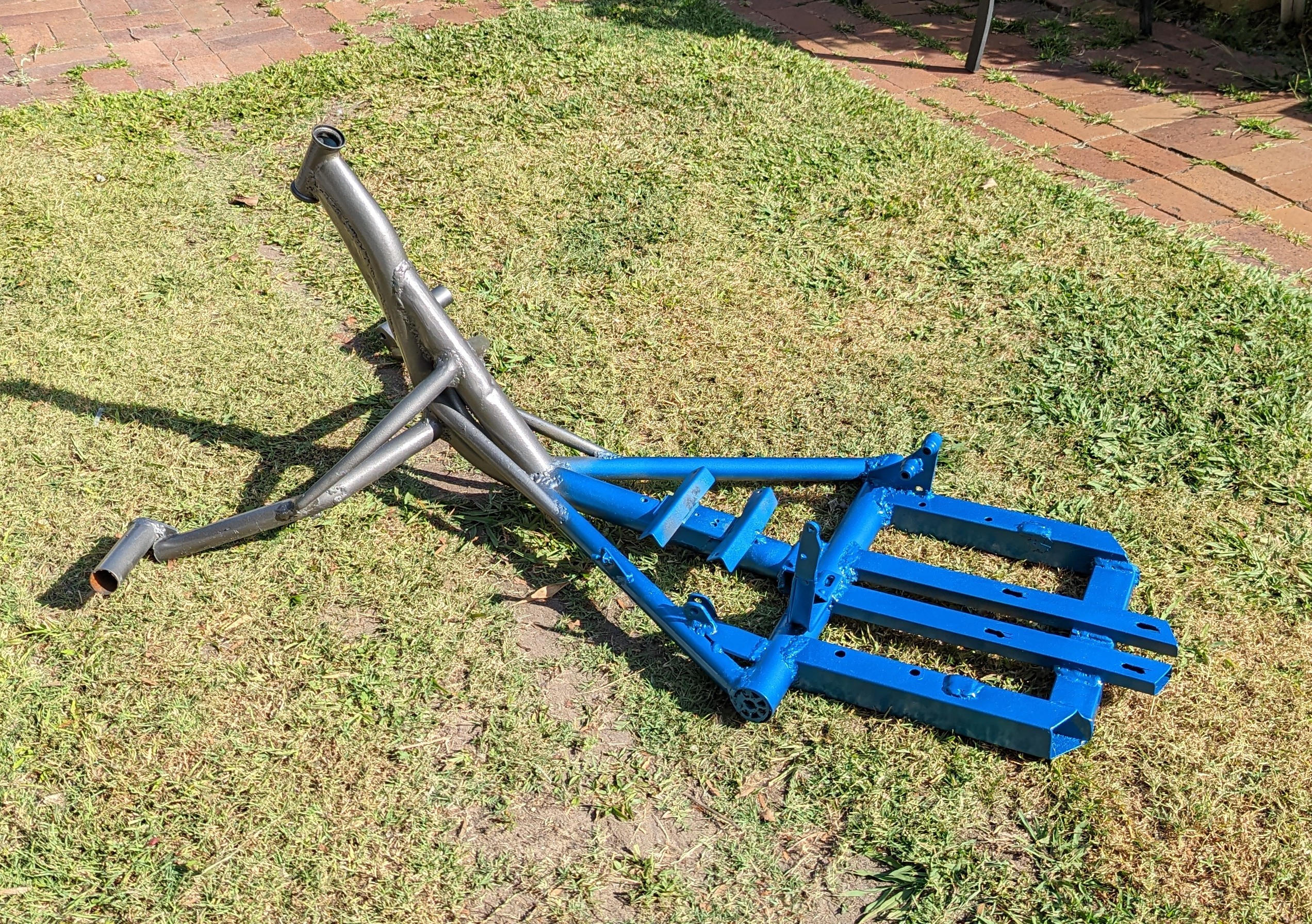 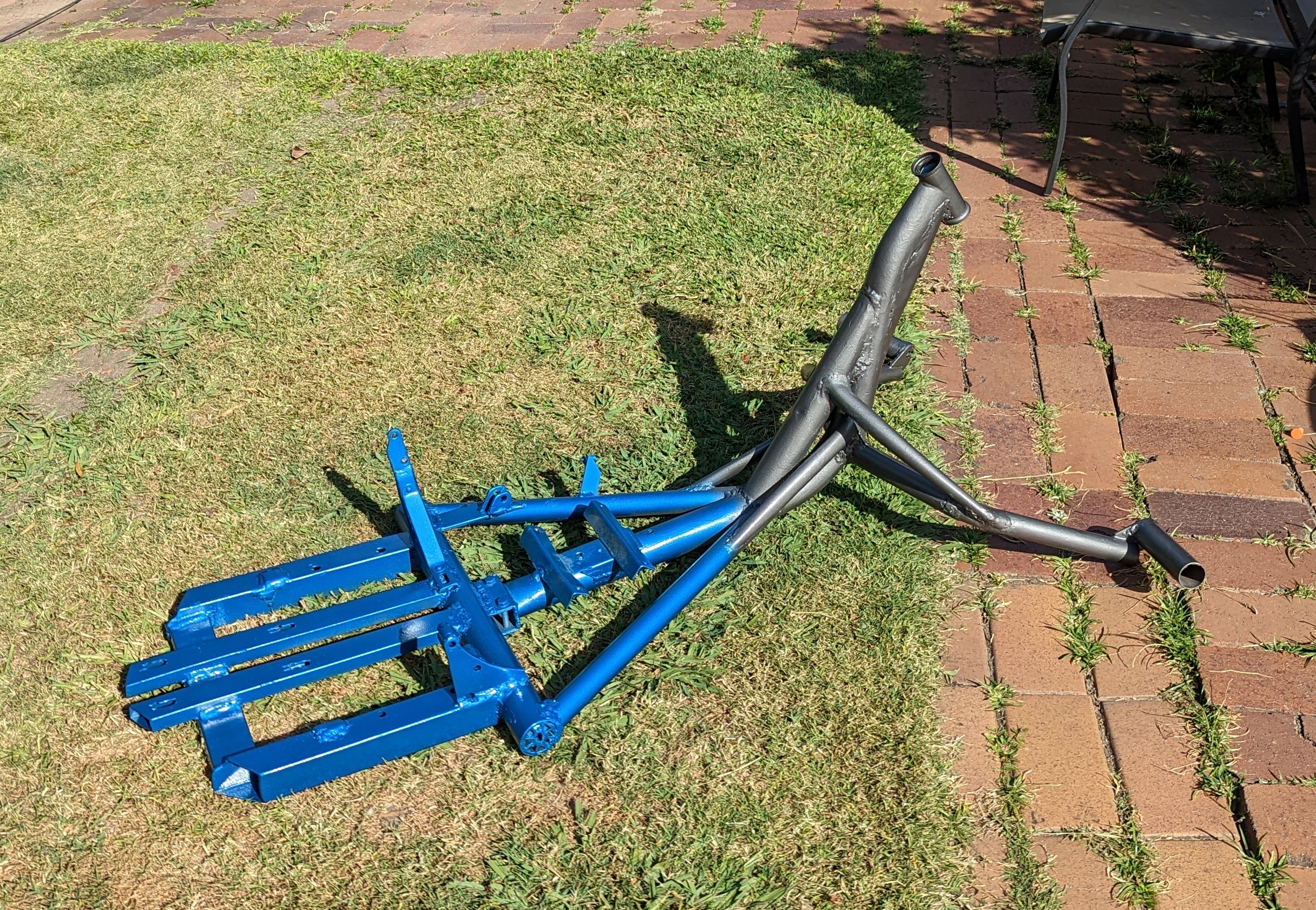 And I tried really hard but I couldn't help myself. 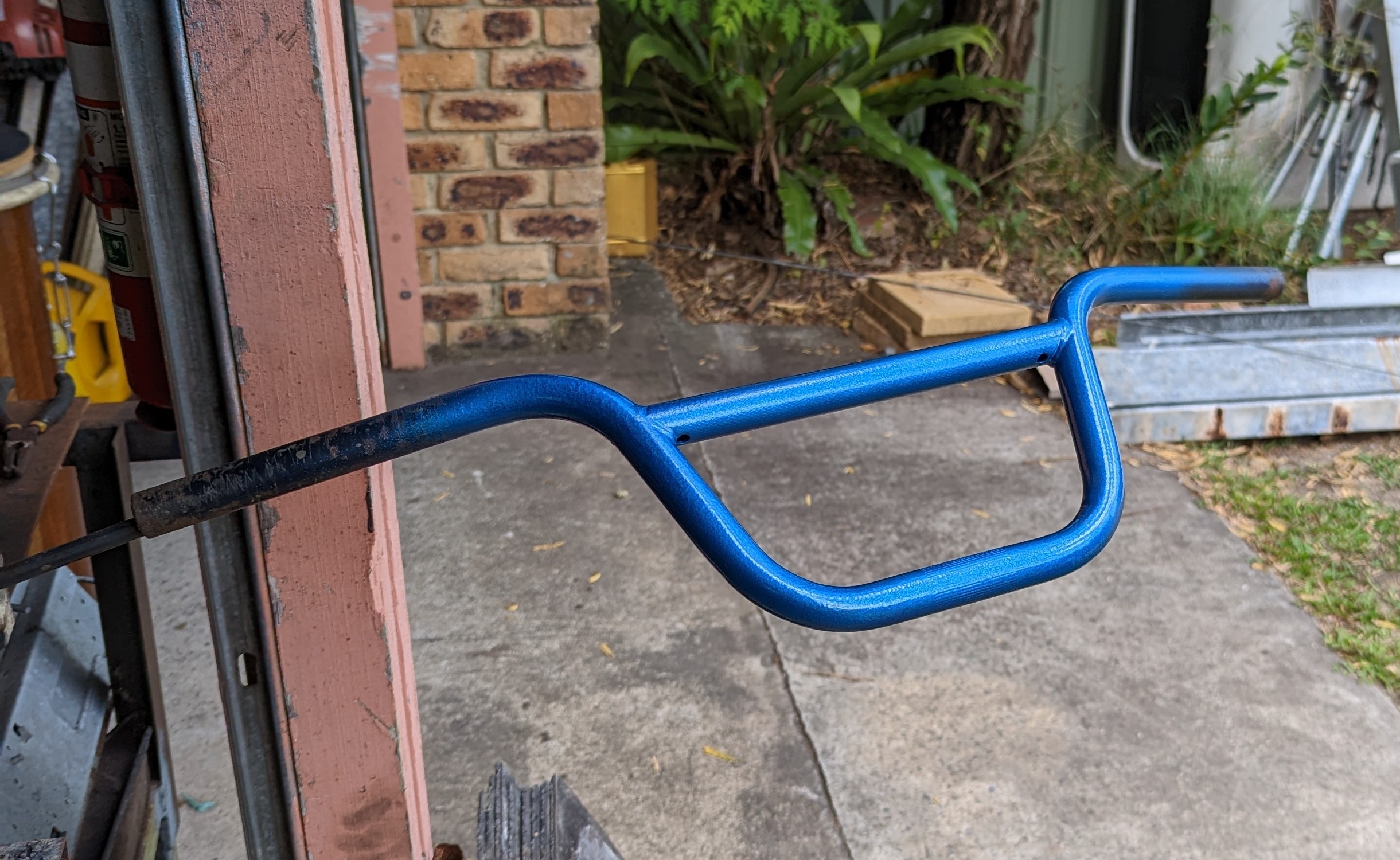 Rating - 0%
0   0   0
Oh Dear!!!, How will I explain this to the wife. I Saw this the other day when I grabbed that SCOTT from the dump shop, I managed to stave off the urges.... 2 days and it had consumed every spare thought going on in my head, I said to myself maybe Just maybe it'll still be there, I had a load of palm fronds in the ute to take to the dump so why not.
Well every man and his dog was taking rubbish to the dump today and the line was out the gate and down the road. I headed straight to the dumps shop and found it, the thing had been moved but I tracked it down.
This "southern star Rythym drift trike is a clone copy of the hot wheels drifter. Minus the disc brakes it's basically the same thing, theres a slight variation in the seat and mounting but I think it's a wee bit stronger in that area, it looks cool as it is after I washed it,
If all goes smoothly with the hot wheels tests then I'll make a 2nd but maybe a bigger more stupid motor. 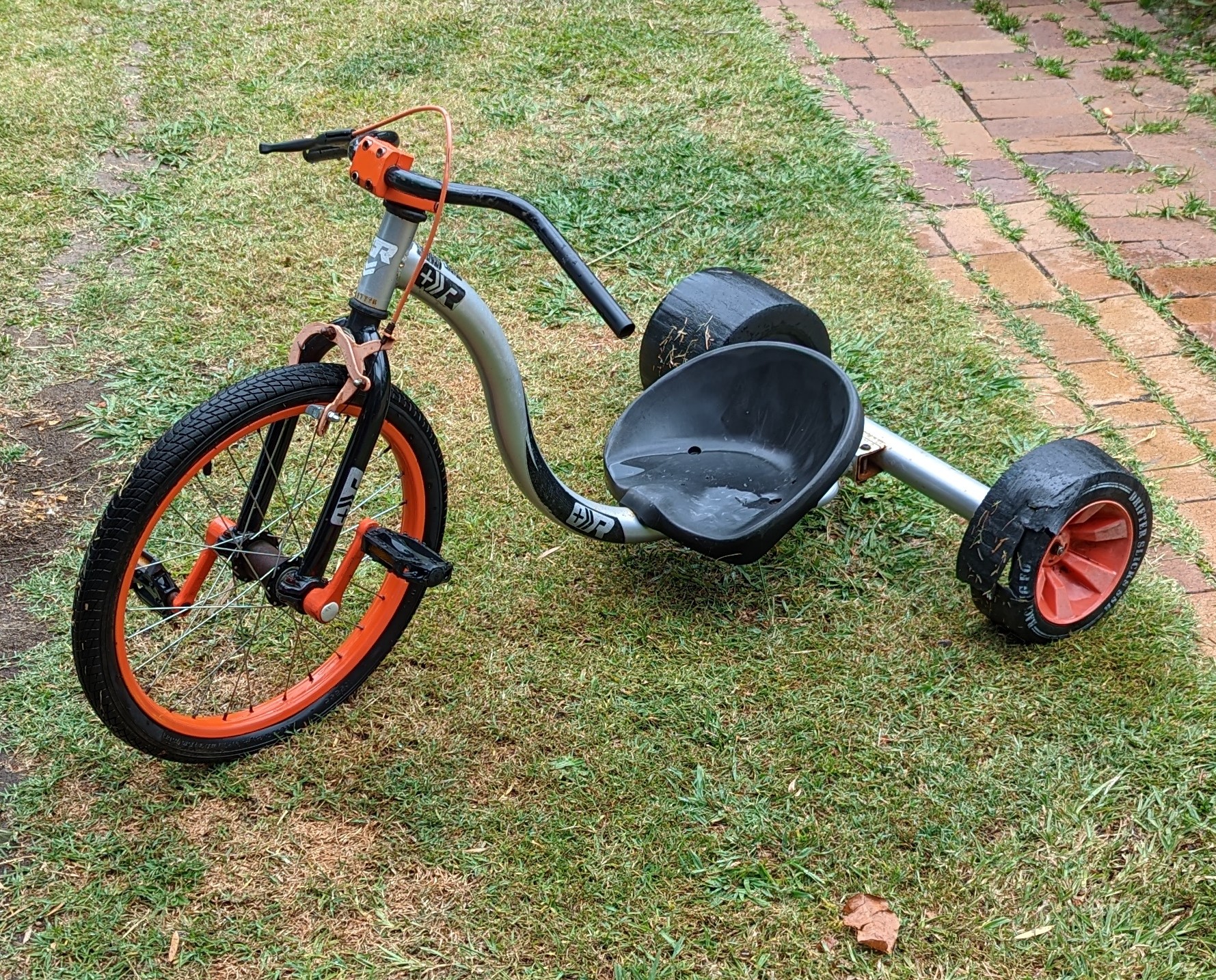 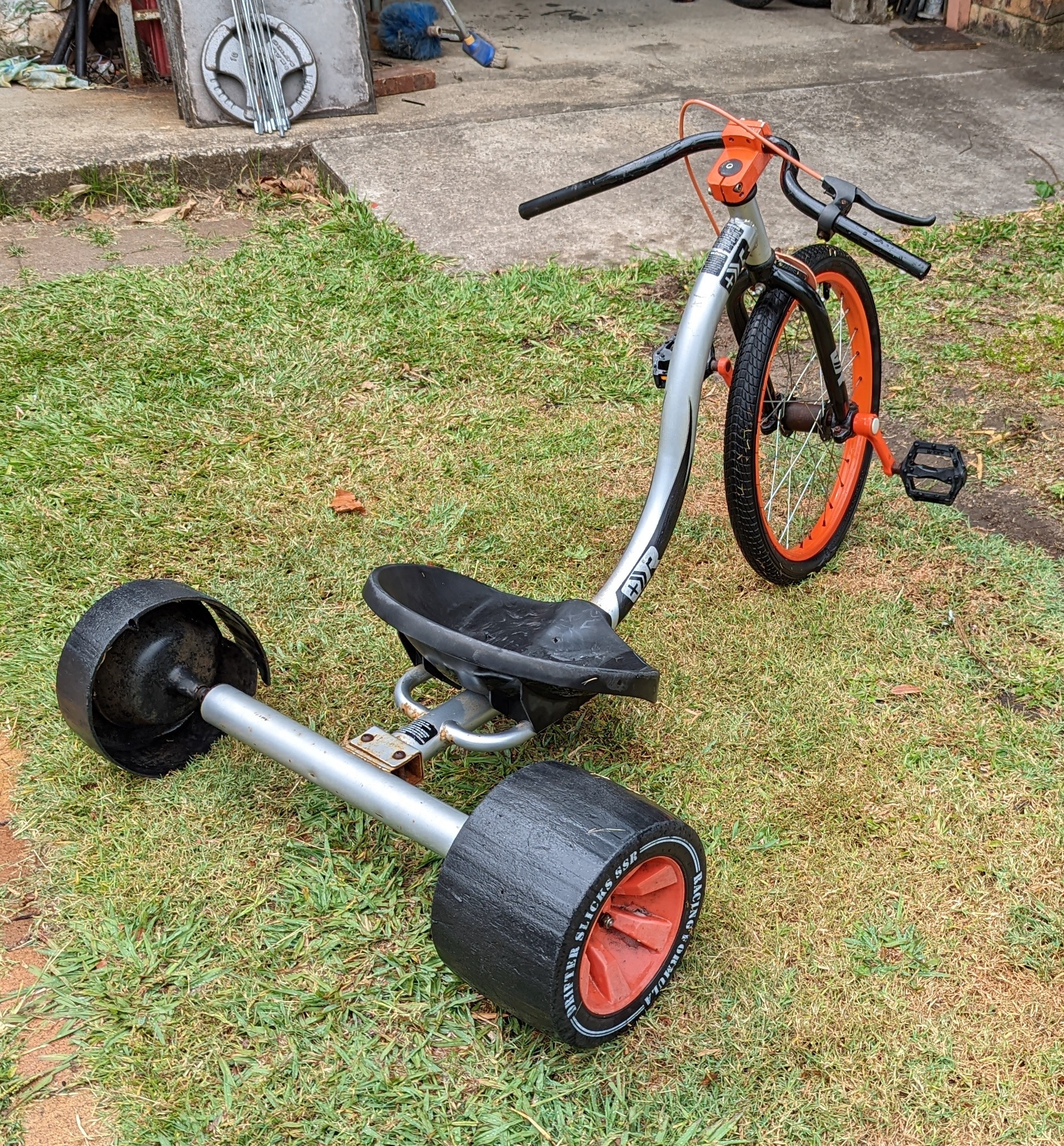 Rating - 0%
0   0   0
What looked to be straight forward and simple ended up being a huge headache.
The motor has everything ya need to run a cable in through the rear, I of course wanted it coming in from the side (shown) , there's holes n room to move the lock screws and cable end anchor 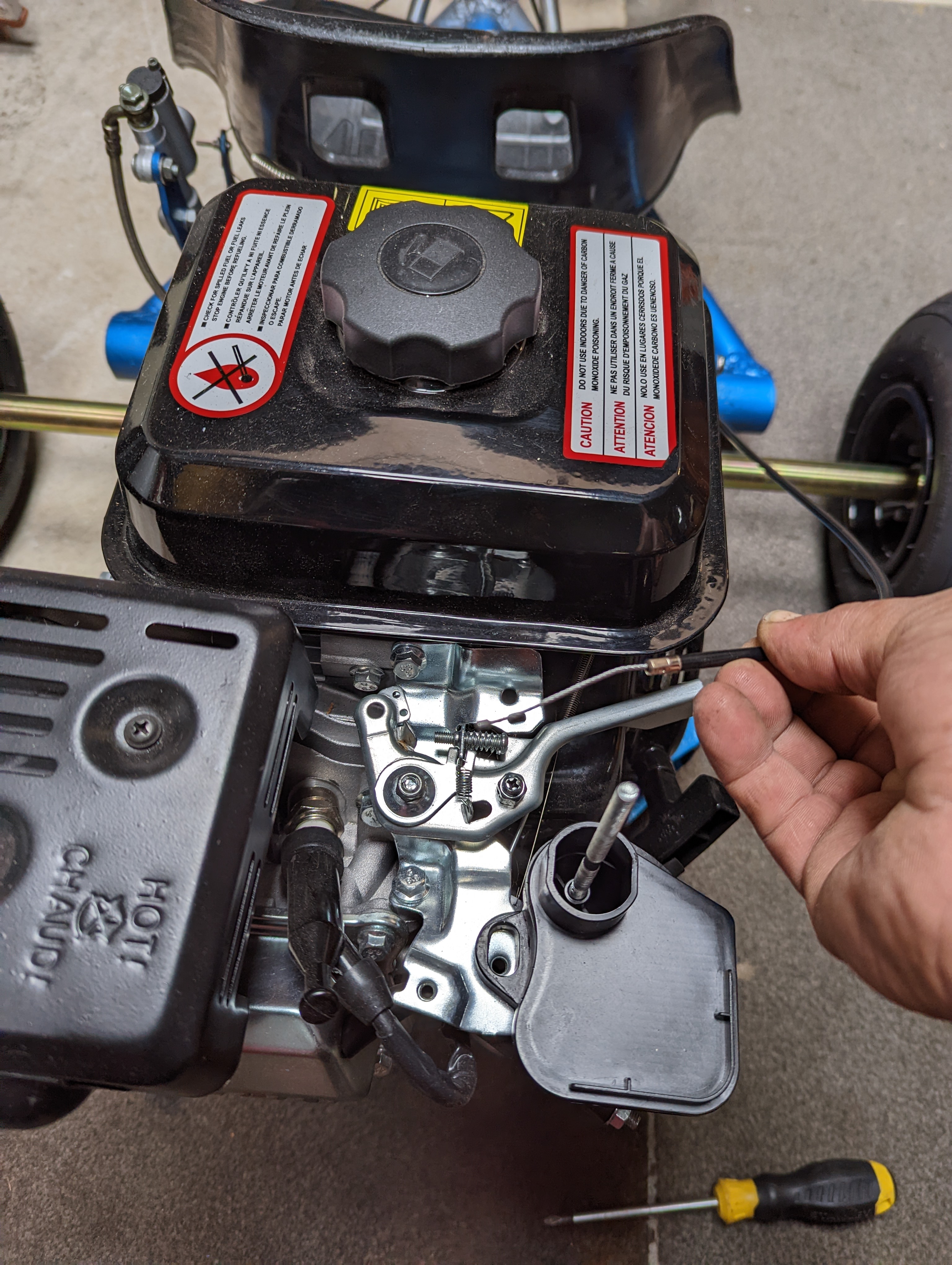 Well nothing fit in it's new places so I began fabricating the smallest part I've done so far. 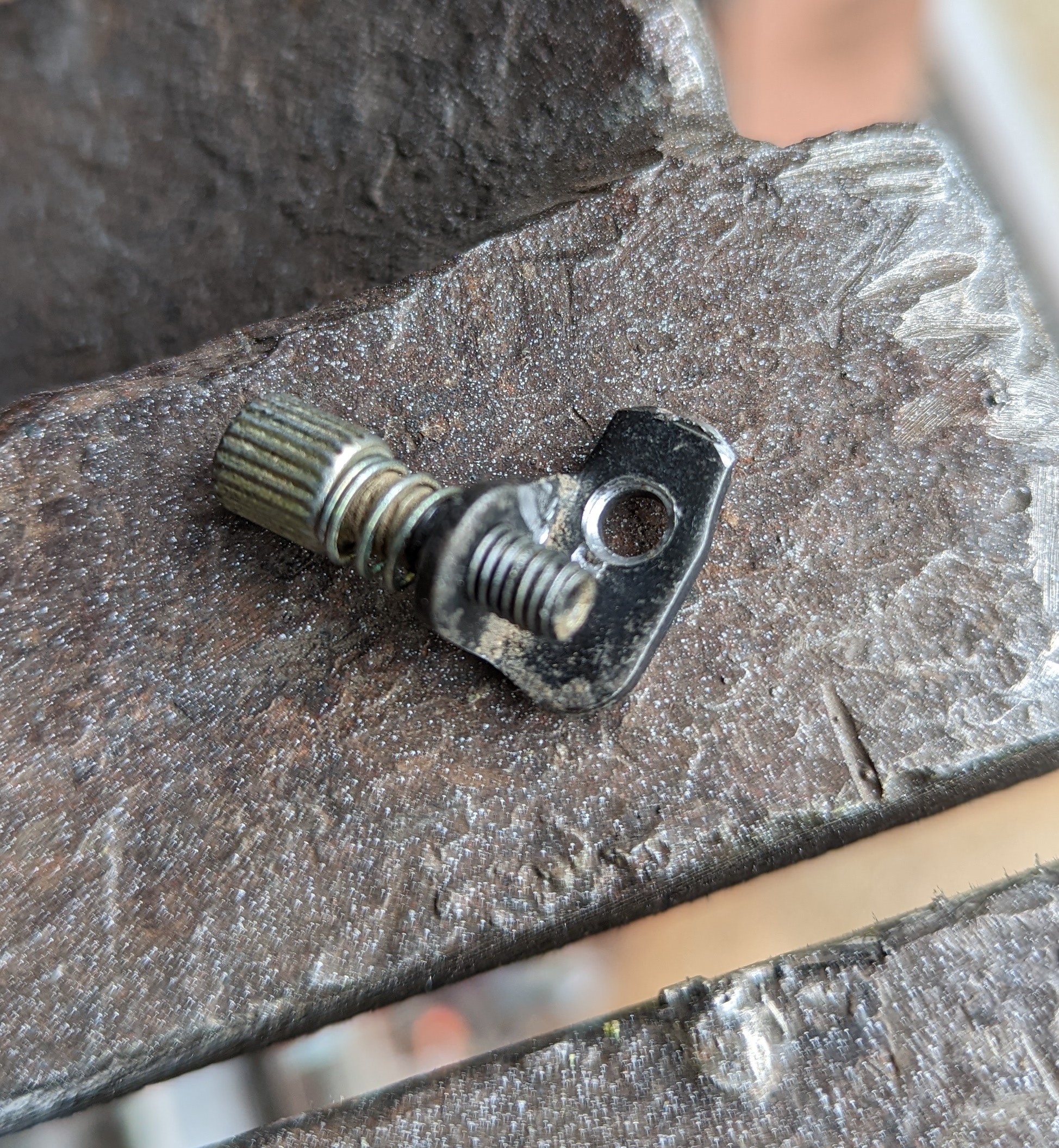 I put it all together and it was working well, I noticed that it wasn't returning to fully closed so I began hunting an extra spring as I'd seen a couple installs on YT so figured I'll go that way, well this started a 3hr ordeal that's now over but I'm not settled on this particular throttle spring set up, its working and fit for purpose but real backyard bashing and ruff.
After pulling springs from just about anything that had one I settled on an Inner spring from a nerf gun, the big one that compresses the air, quite large and long but it's also soft and is easy to use on the thumb.
You can see the big spring under the exhaust, the exhaust cover had to have a corner shaved so the spring dosnt catch, no loss here as a new after market exhaust pipe will end up on it at a later date.
The spring just hooks over the exhaust manifold bolt on the other side of the motor and has enough extra to put a nut over it to stop it from wandering.
Like I said it's working well I'm just picking at the application, sorta let my guard down right at the end but hey, im gonna start this thing as soon as the young bloke gets home from school!.......beer in hand of course!. 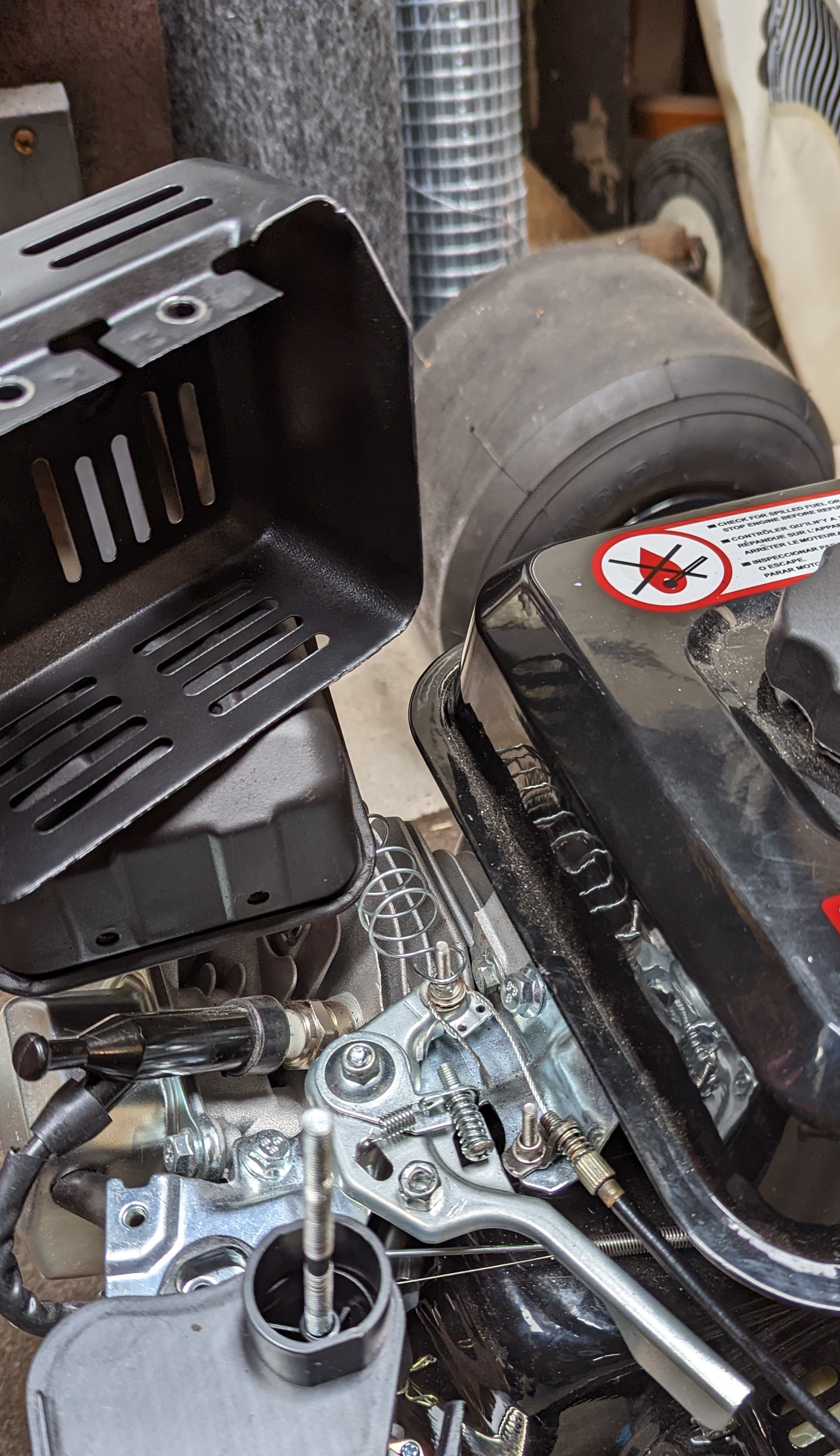 I managed to upload a quick vid on how it works.

Rating - 0%
0   0   0
I managed to do some editing this morning! Here's a a quick 1 hr vid crammed into 45 seconds of the final assembly.
You even get a face to the name at the end!
And Happy birthday to me, its raining and i cant even get this thing out for a birthday present bash! it'll slide real good but im still waiting on the sleeve's which im hoping are here today....my special day LOL

Rating - 0%
0   0   0
Its done, tested and it works great! these things are not for the faint of heart, they're rough, loud, ride hard but not really really fast, you sit on it and the things vibrating and shaking like heck, you throttle on and start moving and any fear or surprise from the idle dissappear and are replaced by an adrenal flow.
Its great fun . the young blokes still intimidated a wee bit and didnt want a ride, it'll be his first ride on a powered machine apart from 12V electric go karts as a 6 yr old. it was the noise that put him off but he'll warm to it, he's only 12 LOL, and ive got lots of patience.