I got this camel back Collegiate through some trading. As soon as I saw it I saw a bigger Manta Ray or Fastback. So... I've been gathering parts since March. I still need a seat. I've got a white and black one to throw on if I don't find a good Pea Picker seat in time, but that's ultimately what I want for it. Things I'll need to do:

Lace rear hub to a 26x2.125 rim so I can use a 26" Jerald Sulky (Slick)
Spread (this will be the tricky part) the stays to accept the Sulky, but avoid the new, bigger, mag chain ring.
Then throw the rest of the parts on, and put new cables and housing on it.

The paint is so-so. Lots of chips and scratches. I'm going to clean and polish it the best I can, but ultimately I think it will need a repaint. But that won't happen this built. When I do that, I'm going to remove and smooth the cable guides that aren't going to be used again. In fact, I may remove them carefully, then throw some touch-up paint on it just so they aren't sticking out. 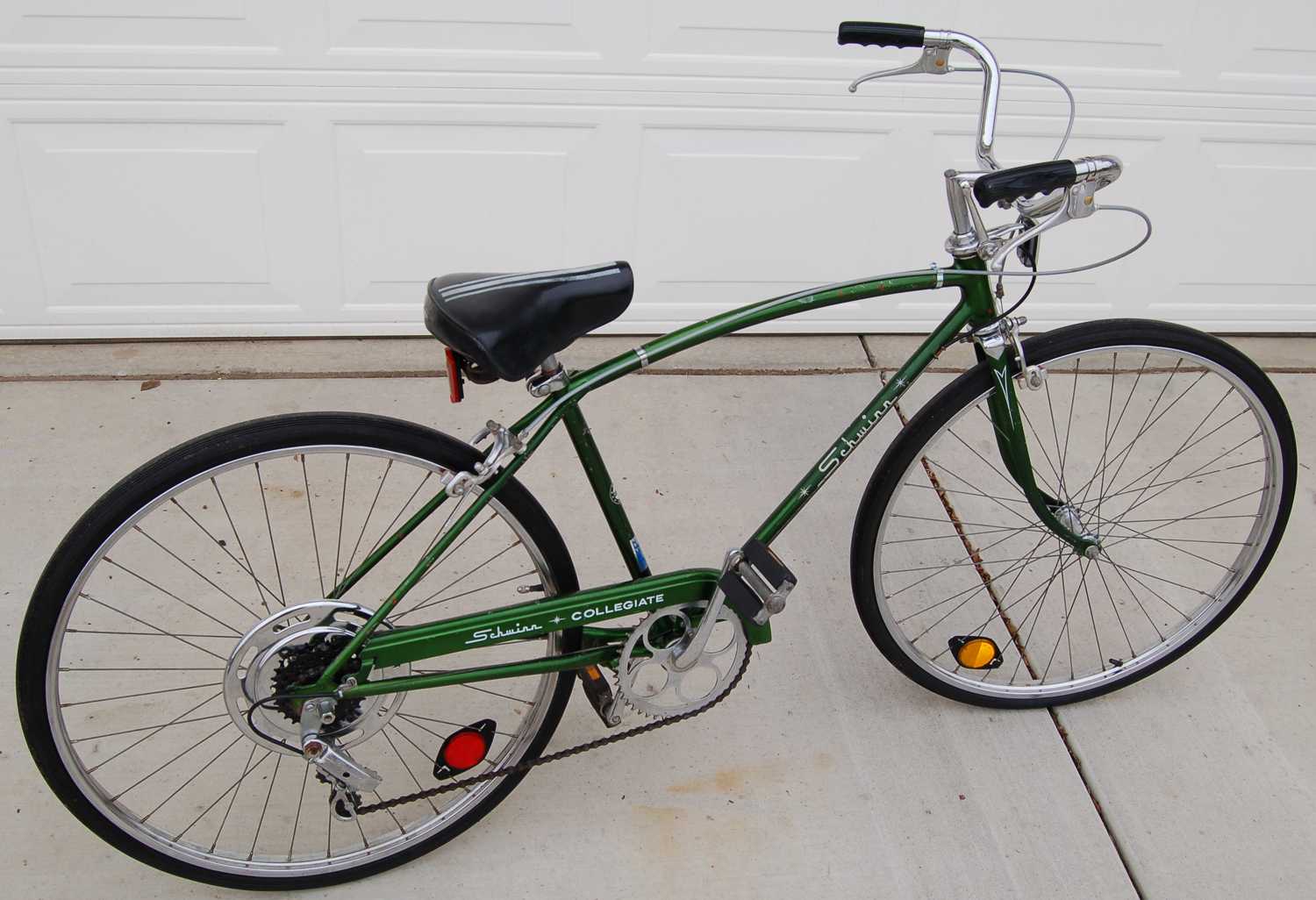 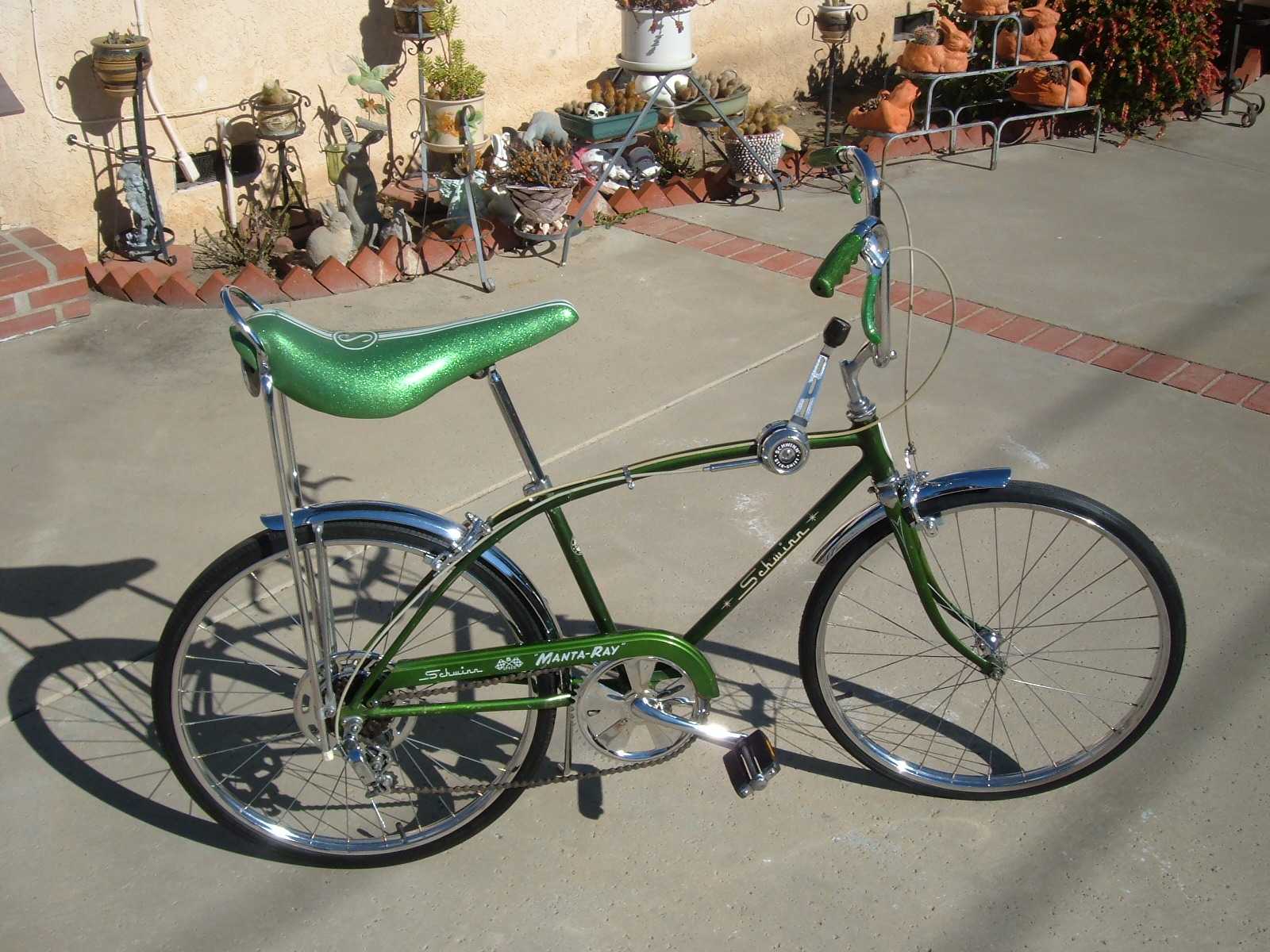 The search for a seat continues.
Visit my build gallery: Crash's Build Page

There's this, but I don't think it's the right color or right look.

Crash, the seat pan appears solid; why not reupholster it in leather or in a custom color(s) of your choice.

BTW – I really dig the concept of this build, I too like the first-gen Manta-Rays – the best of luck in your Build-Off. 8)
Rat Rodding, is, if anything, the passionate act of creating something functional from an ostensible pile of rubble.

I hope this works. I've asked for a reverse of this seat, with more black than the gold/green. I've got a sample sitting on the chain guard, and this green actually works with the campus green. 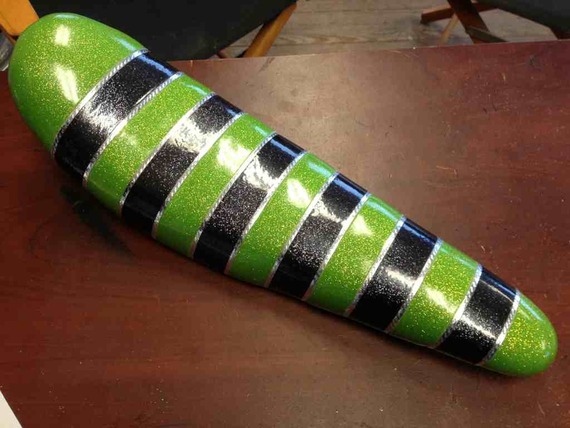 Off to the races!!

I like to start with wheels. The original rear rim won't fit a Jerald slick. On top of that, I don't like old spokes that have lost their luster. So, I'm re-lacing them wheels. The rear will have a 26x1.75 rim. Combined with the 26x1-3/8 up front, I'm hoping it will give it a real fastback look. 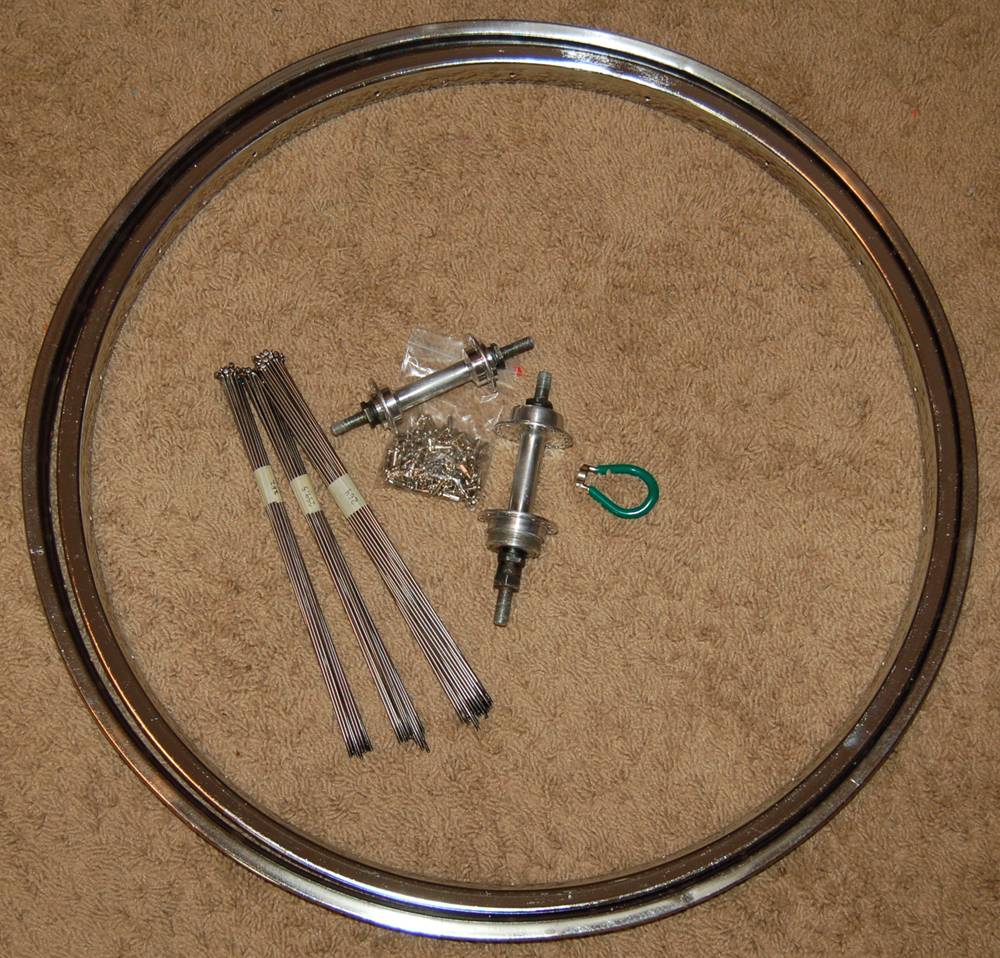 I relaced the rear, but due to a mis-communication with my spoke guy he thought I said I was using the rear rim's size up front. So the 264mm spokes for the front are painfully short. The corrected spokes will be coming with the spokes for my other build Renegade 5.

The new rim, on the top, had some primer in it. I thought that was a great idea since all my rims have rust. So, I cleaned up the front real good and shot it with primer, then cleaned up the overspray of course. 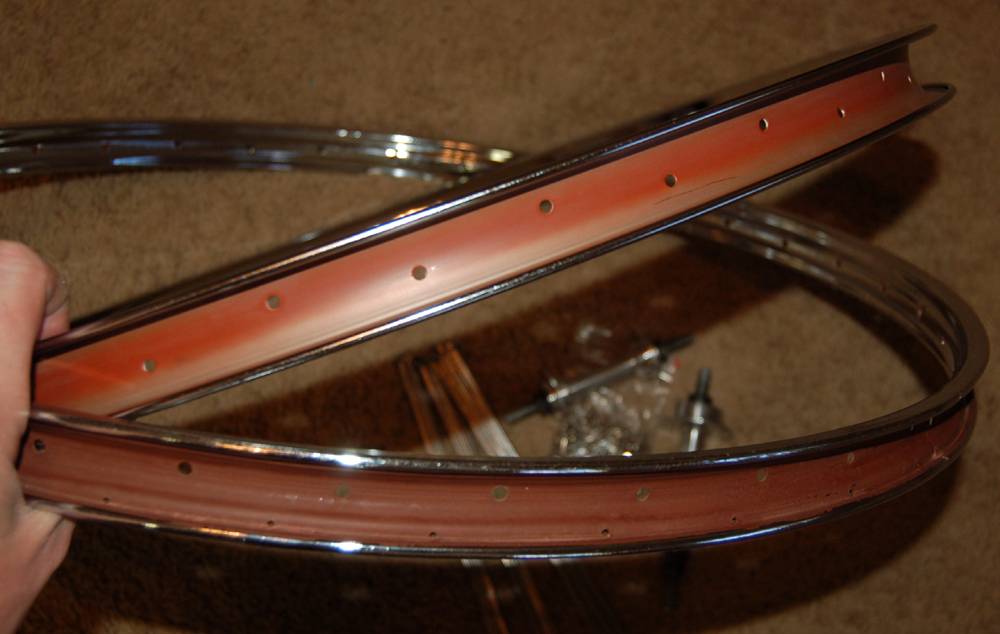 Here's the rear after I trued it. It trued up very nice, but the rim was brand new, so that wasn't too surprising. 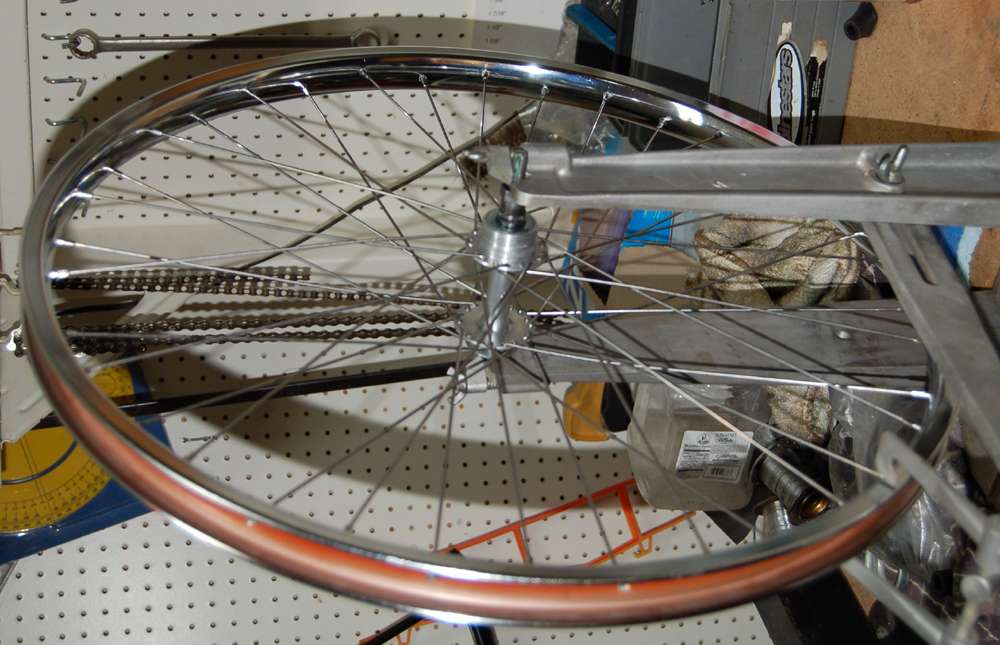 I'm going to paint the slick's letting and stripe to really make it pop. Pics of that when I'm done. Now that the wheel is done and the tire is mounted, it's time to spread the frame. THAT is going to be the tricky part of this entire build. If I can get that to work, then rest of it should be easy.
Visit my build gallery: Crash's Build Page

You are bringing some real game to this build-off CRASH! AWESOME!

This looks like it's going to be an impressive build!

Let me know if there is anything I can do to help.....

Thanks for your support and keep up the good work!

I'm really smitten by the shape of this humpback Collegiate and anxious to see how the build turns out!

Jerald Sulky said:
This looks like it's going to be an impressive build!

Let me know if there is anything I can do to help.....

Thanks for your support and keep up the good work!

I tried to fit my widening tool in tonight, but it's too wide to start. This collegiate frame is really narrow. I've got a lot of work to do to fit your sulky in there, but it's mounted and looks great!

CRASH said:
And a plea: 20" slick sulky's for us muscle bike peeps! :mrgreen:
Click to expand...

Just asked that question, and a request for Redline versions! viewtopic.php?f=1&t=32211&start=210

Not much update tonight. I went to try and spread it, but my spreader won't fit into the narrow stays. So I'm going to have to try to find 2 thin nuts to replace the regular ones to give it the extra close start room. So I did try to work on the cable guides. These guides, plus all the damage to the paint and the haloing around the decals makes me thing maybe I should bite the bullet and repaint it. But the Campus Green kit is pretty expensive, and I don't trust myself to not mess it up. So I'll have to chew on that. There is something to be said for original paint, even chipped. 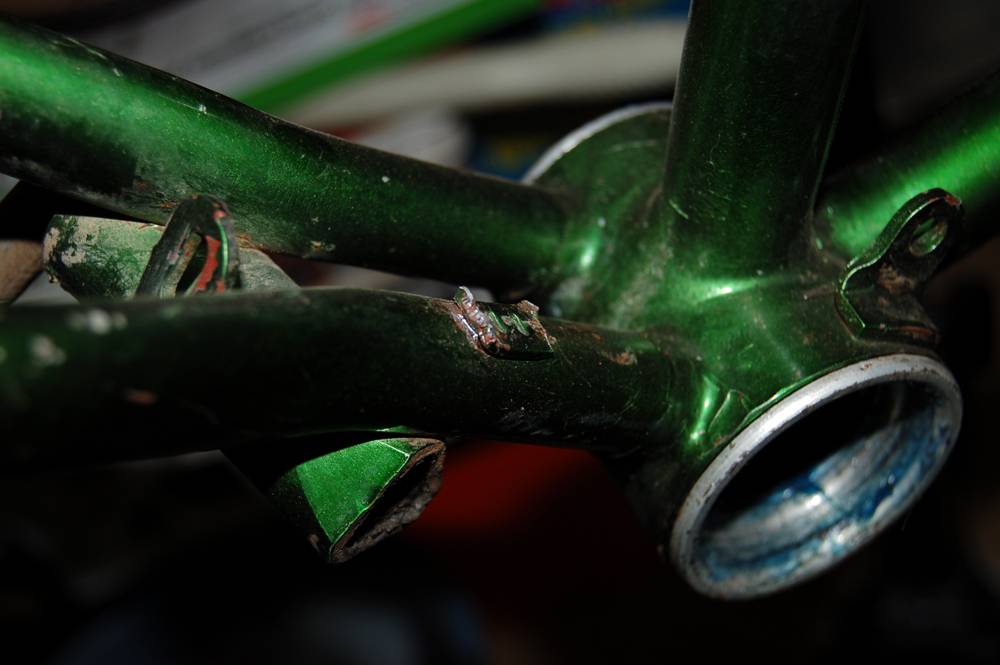 Then I cut this one... (see that old decal halo? 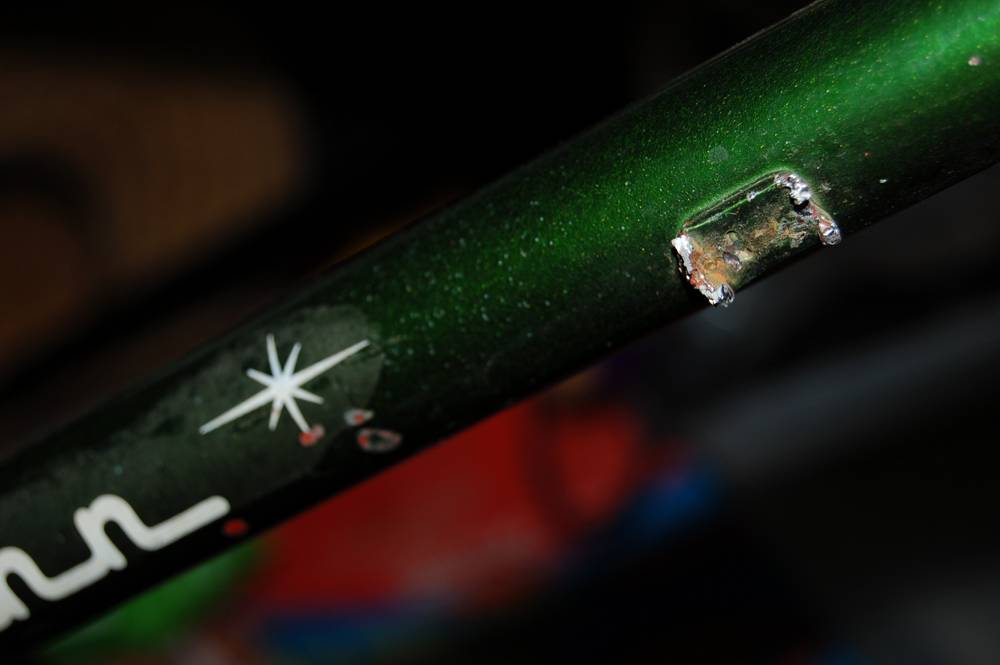 Then while cutting this one it popped off! So I tried to get the rest of them off... no luck. 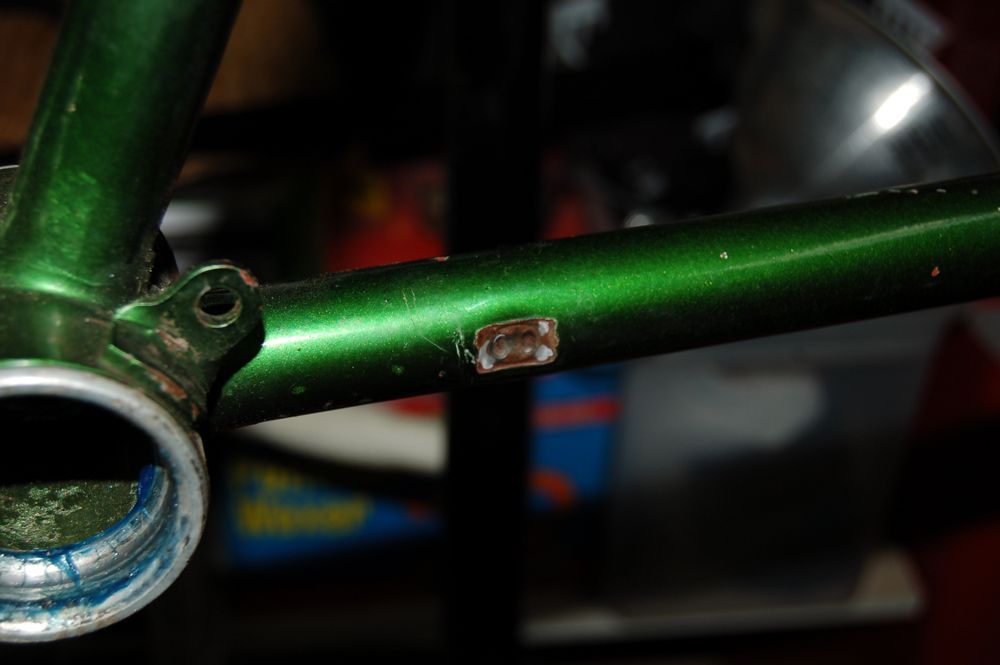 My paint plan was/is to find a nail polish that's a very similar color and touch up over those guides after I file them. Then polish the frame somehow to make that paint come alive and possibly minimize all the imperfections in the paint.

But first... I have to spread it. It's what I'm most worried about. If it doesn't spread correctly, and/or if the 52t mag sprocket doesn't fit... I'm in for a hard fail on this one.
Visit my build gallery: Crash's Build Page

I really hope it works CRASH! It has everything required to be possibly the coolest bike every made!

CRASH, if you are ‘cold-bending’ the spreaders, do it very slowly and patiently over time.

I used the jack from a 2001 Ford Focus and turned it at the rate of about 4mm per day for several days in order to ‘shoehorn’ the 7-speed Nexus hub into the seat/wheel spreaders. On the last day I turned it about 8mm’s for clearance and she fit perfectly, the reason for the extra turns was to compensate for metallurgical memory. 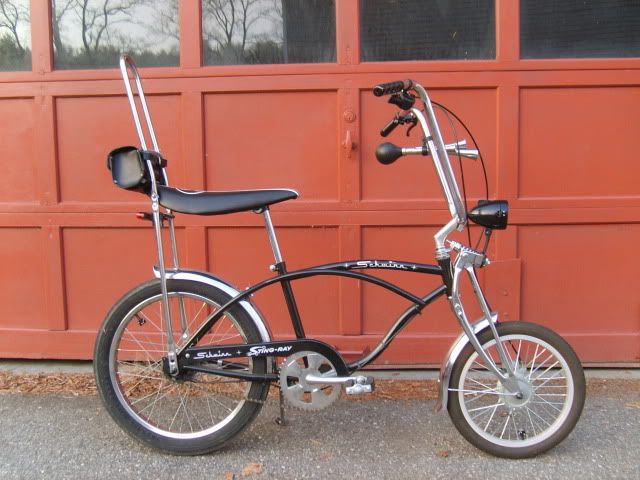 Good luck in this effort, CRASH!

BTW I’ve used nail polish in the past and it worked in ‘fixing’ small dings and scratches, its good stuff, very stable when applied in coats of three or more.
Rat Rodding, is, if anything, the passionate act of creating something functional from an ostensible pile of rubble.

You called that Blackjack? Look in the build section for the 3rd build I have going on right now of the same name. A 30's Rollfast frame that I'm also spreading.
Visit my build gallery: Crash's Build Page

I started customizing Blackjack as soon I got her into my shop from the store. In all these years she has been ridden in NYC, Ayer MA, Cape Cod, Northern Michigan and all over New Hampshire and Vermont.

Blackjack was a natural name for it as soon as it was finished! When I saw it sitting on the Wally World shelf – it was bought – simple as that!
Rat Rodding, is, if anything, the passionate act of creating something functional from an ostensible pile of rubble.

I am using a spring compressor from Harbor Freight which has been reversed in order to spread my frames. The problem I ran into with this frame is that at the set up doesn't fit down where I need it. So, to help it, I looked for thinner nuts. But failing to find any... 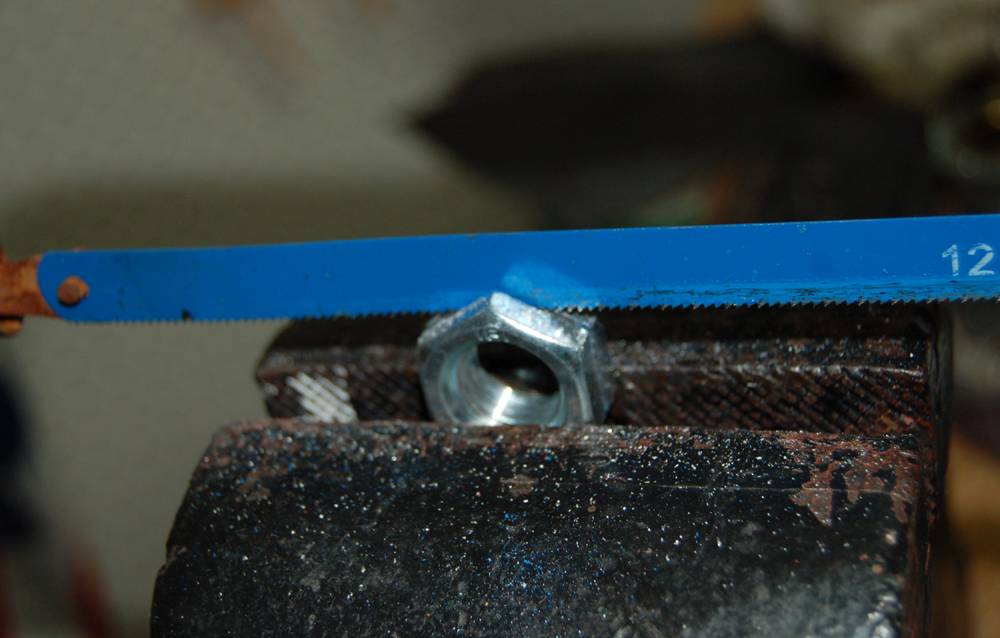 So I stuffed the wheel in to see where it needed widened. I cleaned up and threw the BB and sprocket on to make sure that huge 52 tooth sprocket would clear while I widen those stays. 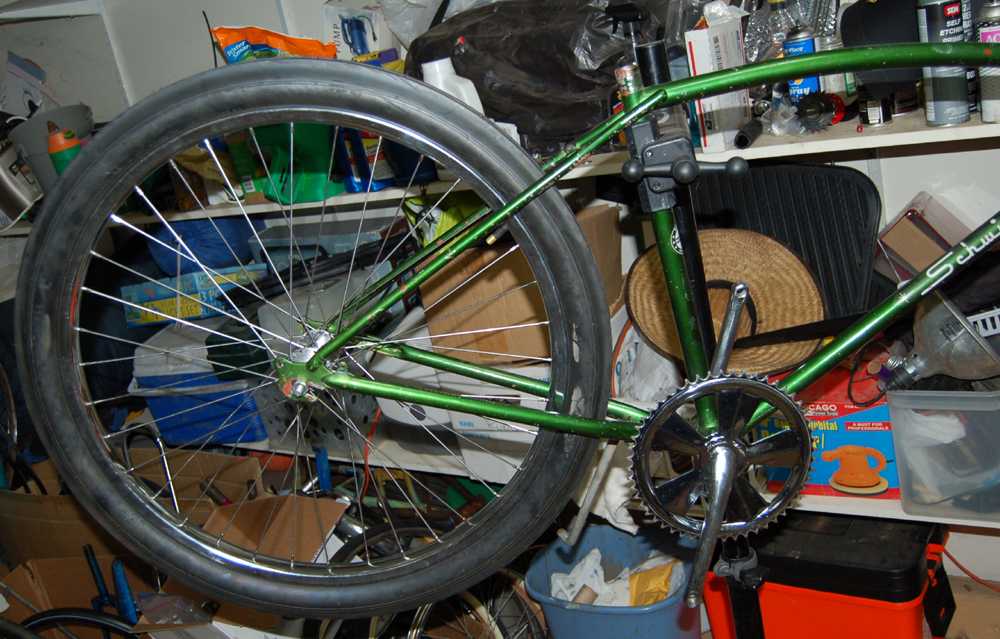 As you can see, there needs to be about an half an inch on either side. Jeralds are wide at about the mid-point of the sidewall. 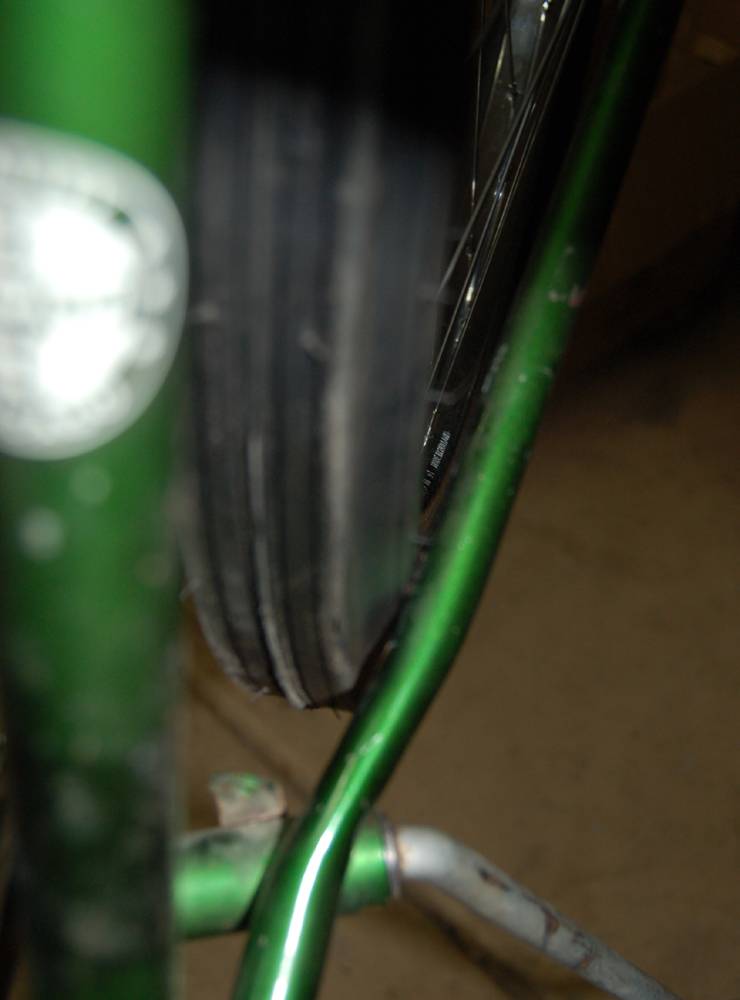 I'm highlighting the point I need to widen. You can see where the spreader actually seats. I'm going to spread it a little, then swap the sides... back and forth. Slowly. Maybe I can move it forward a bit each time. Cross your fingers. I am, because the entire build rides on this. 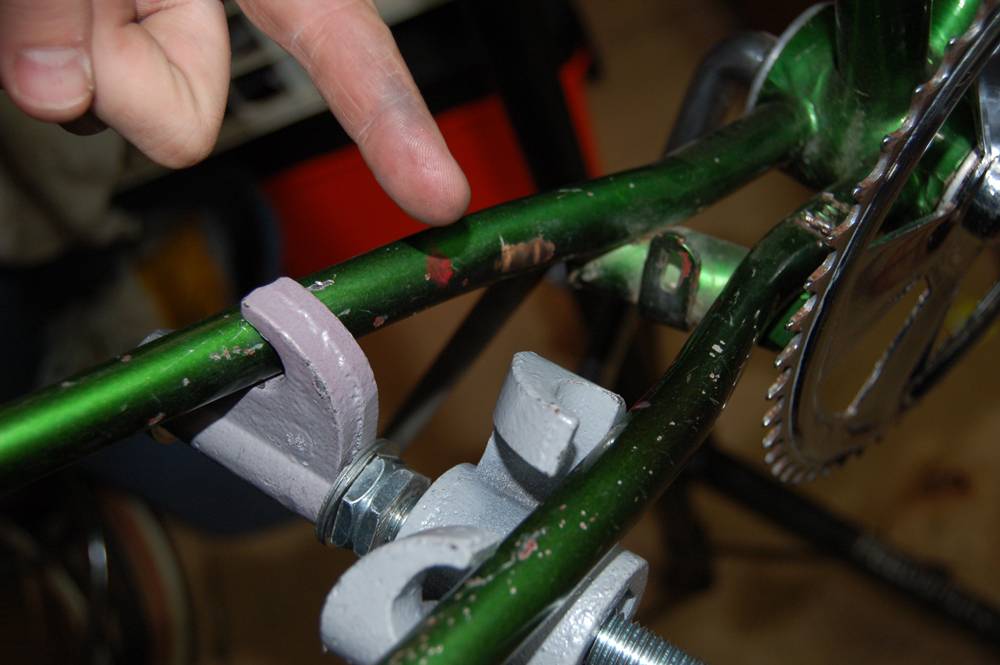