Spaceliner... One small step for Murray, one giant leap for all spacebike kind.

Rust in Space is a late '60's Sears Spaceliner. The name is a takeoff of "Lost in Space" as I could not come up with a clear plan for the build. I felt lost. So I let the bike guide me in how it wanted to be built.

The bike started out as a rusted hulk. As I got into it I found the rat trap springer was broke and the wheels were unfit to use. Lots of WD-40, 0000 steel wool, some paint stripper, a bronze wire wheel in an electric drill and a few gallons of elbow grease brought back most of the original Murray chrome, with just enough rust to spice it up a bit.
Also suffered a spider bite during the project that put be out of building a few weeks and bought two other cool old bikes that took my attention from this build. But the Spaceliner was completed in time for the September 9 blastoff!

The wheels are from a Huffy Cranbrook. Tires are 26x2.00 from an Electra Townie.
The front fork and handlebars are from an old Huffy Good Vibrations lady's bike.
Headlights and taillights are small LED flashlights mounted in rifle scope rings on small sections of Weaver rails.
Lay back seat post from Chop Shop Customz. Seat is a Selle Royal Drifter. Grips are Thompsons coke bottles from @ifitsfreeitsforme.
Tank and rear rack insert are home brewed from plywood.
Home brew truss rods to replace the DOA rat trap springer.
Sprockets are from Spacely Sprockets.
NASA air freshener from WalMart. 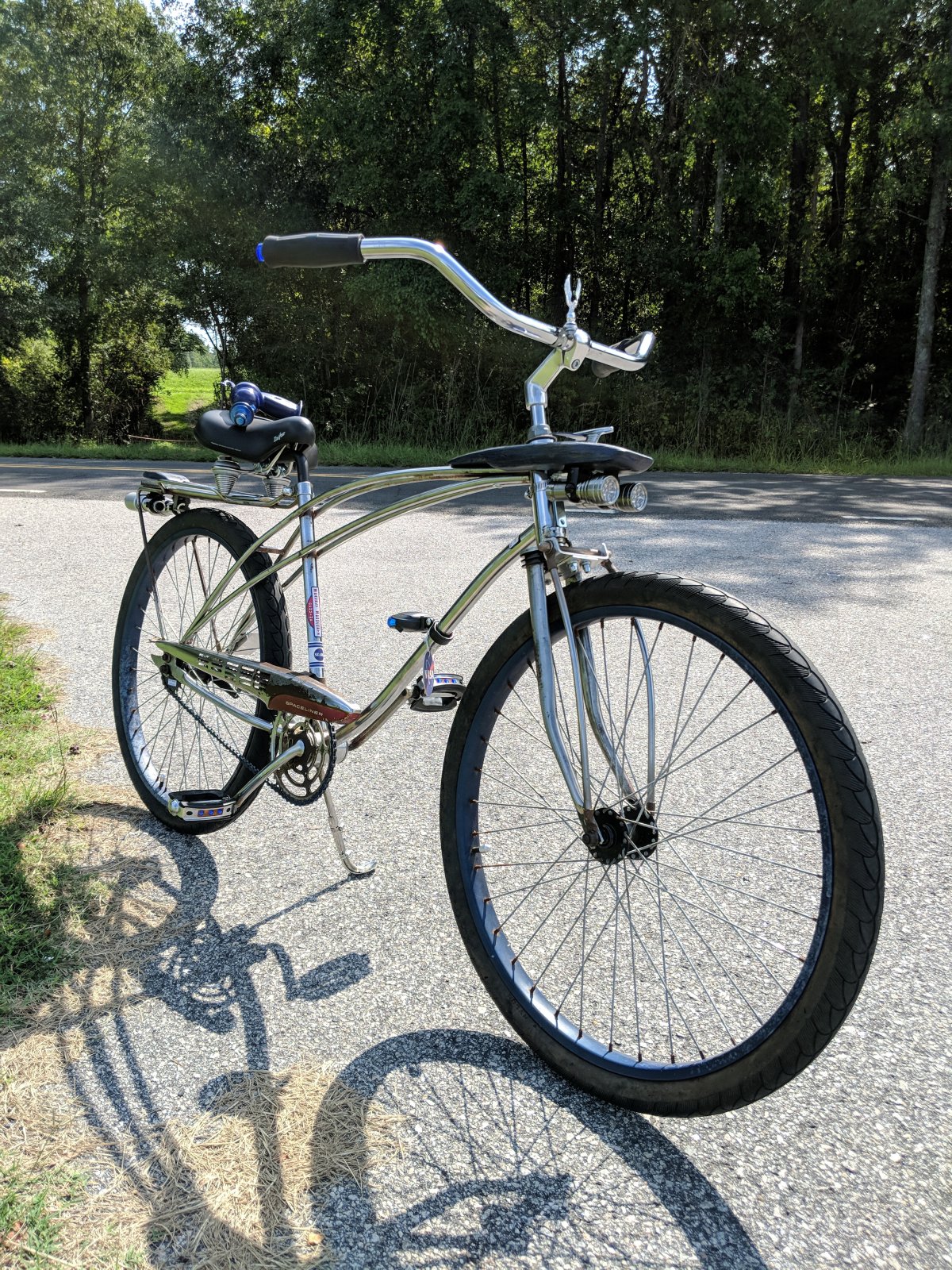 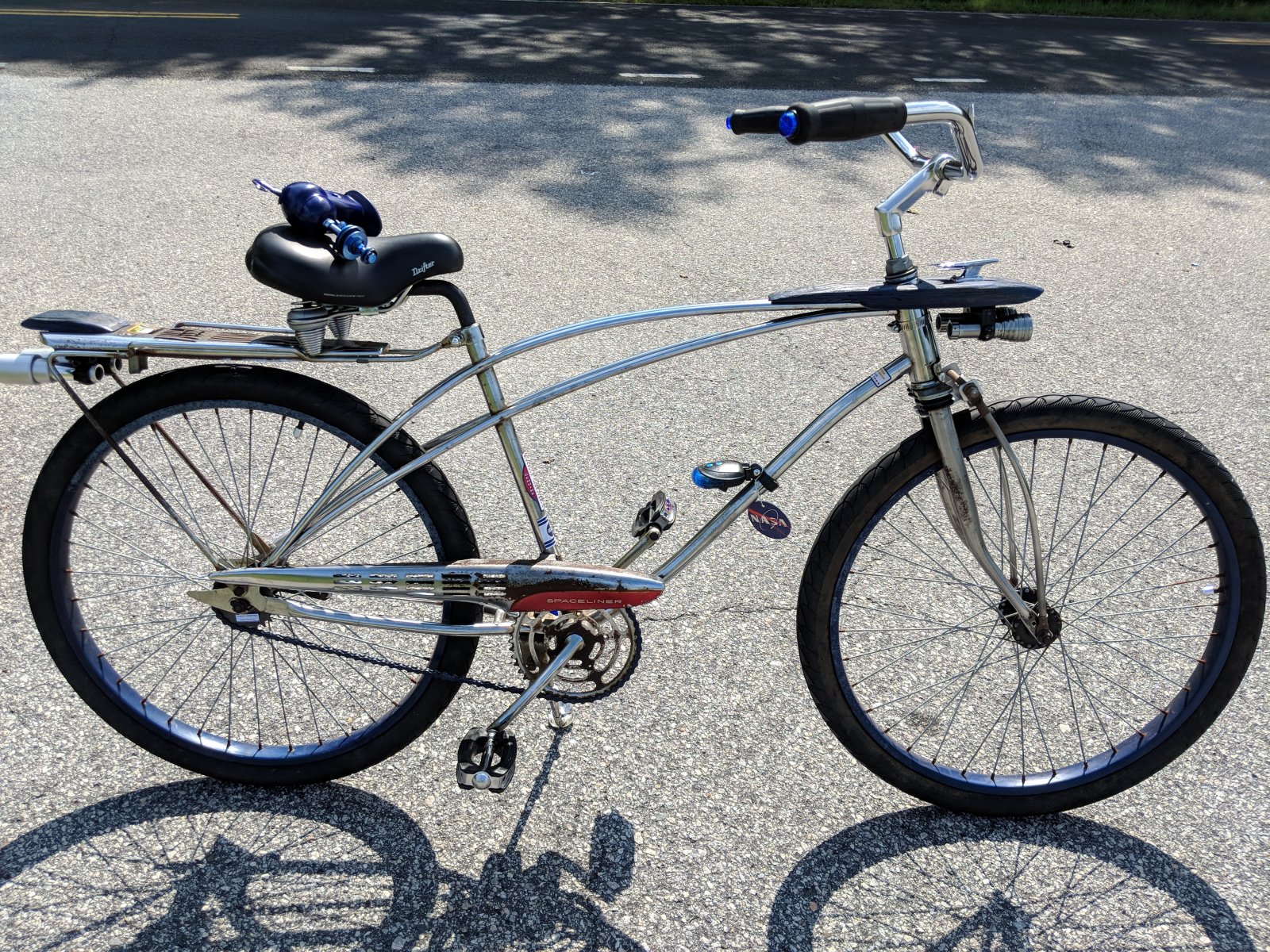 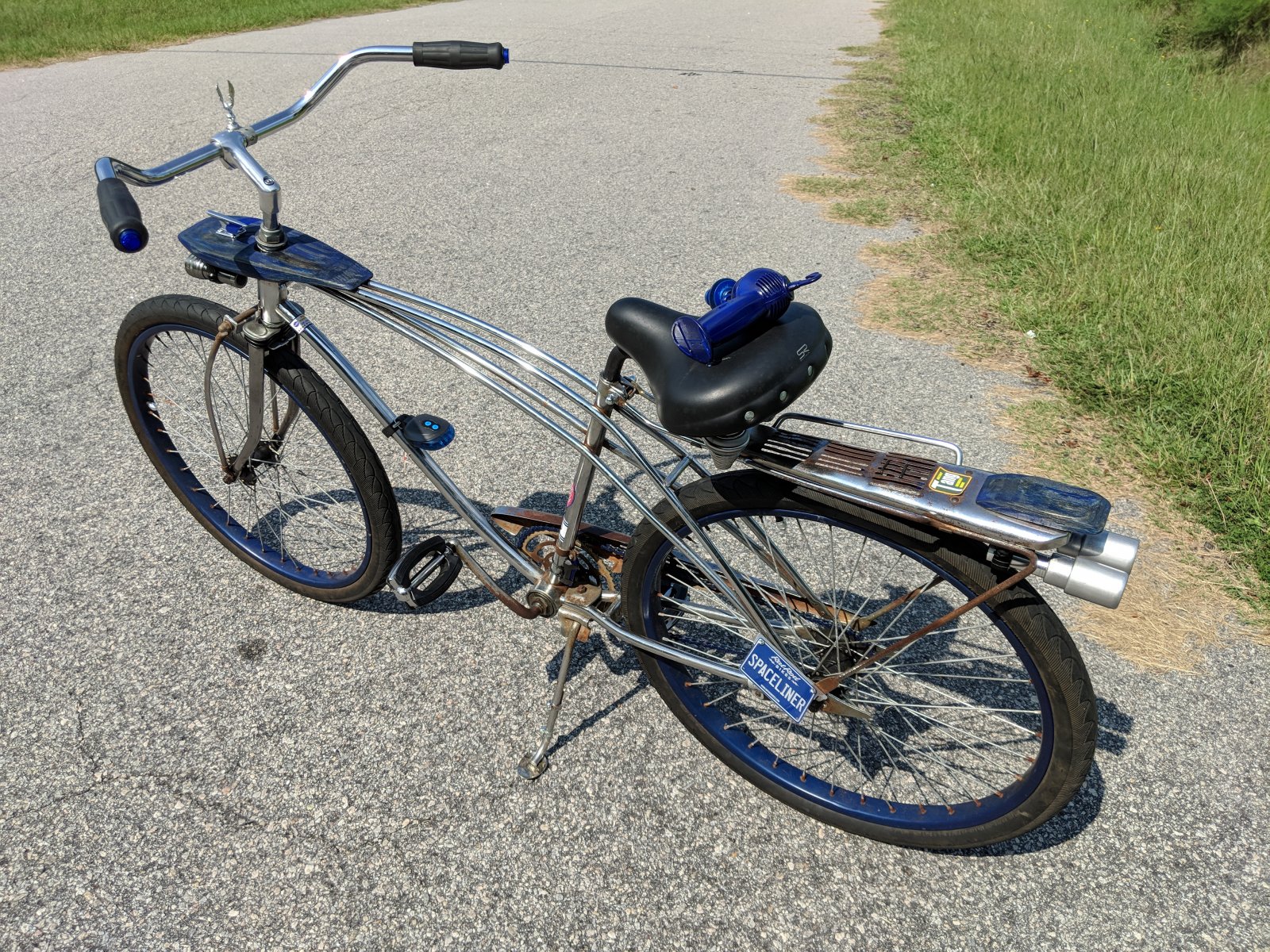 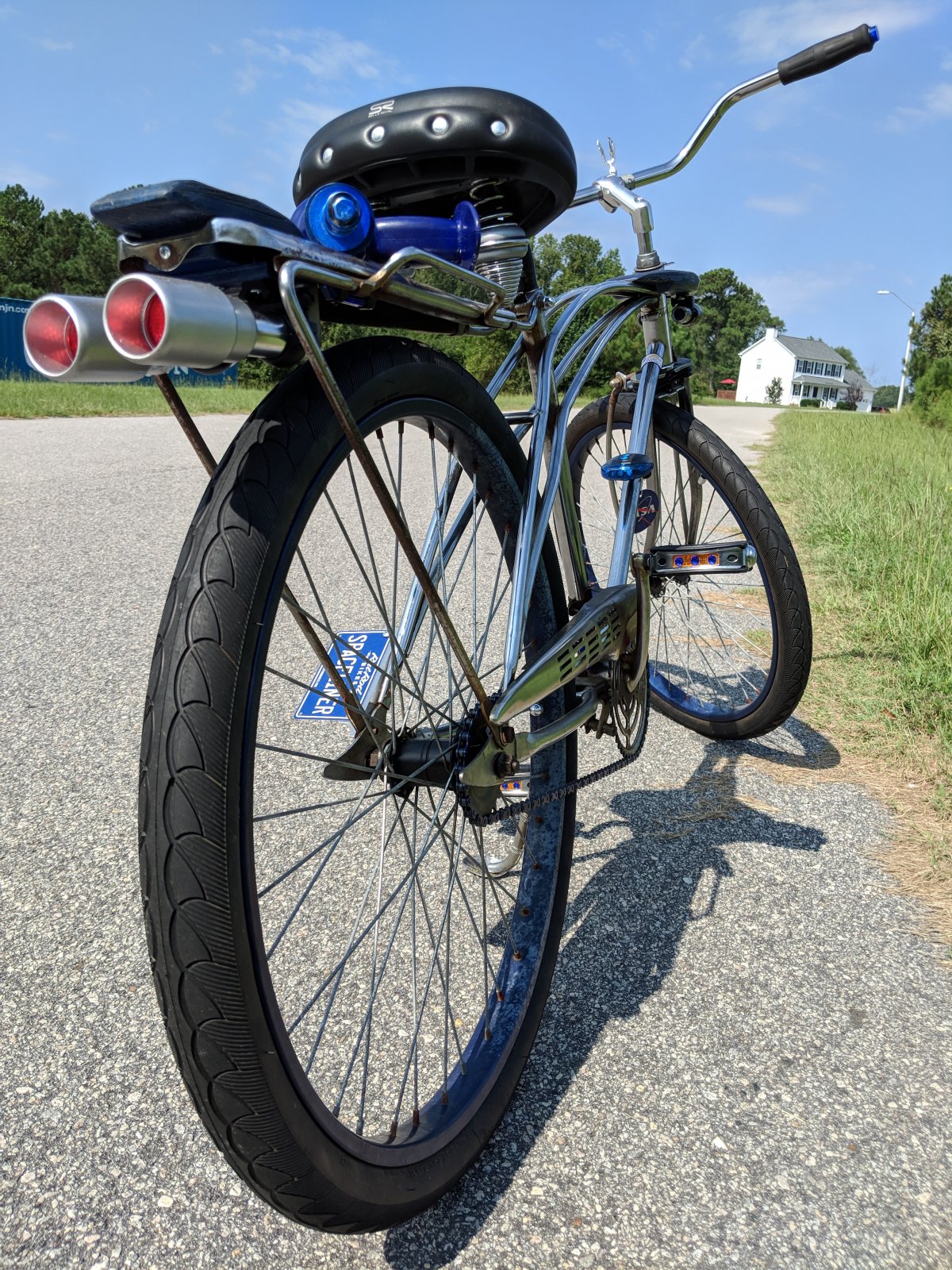 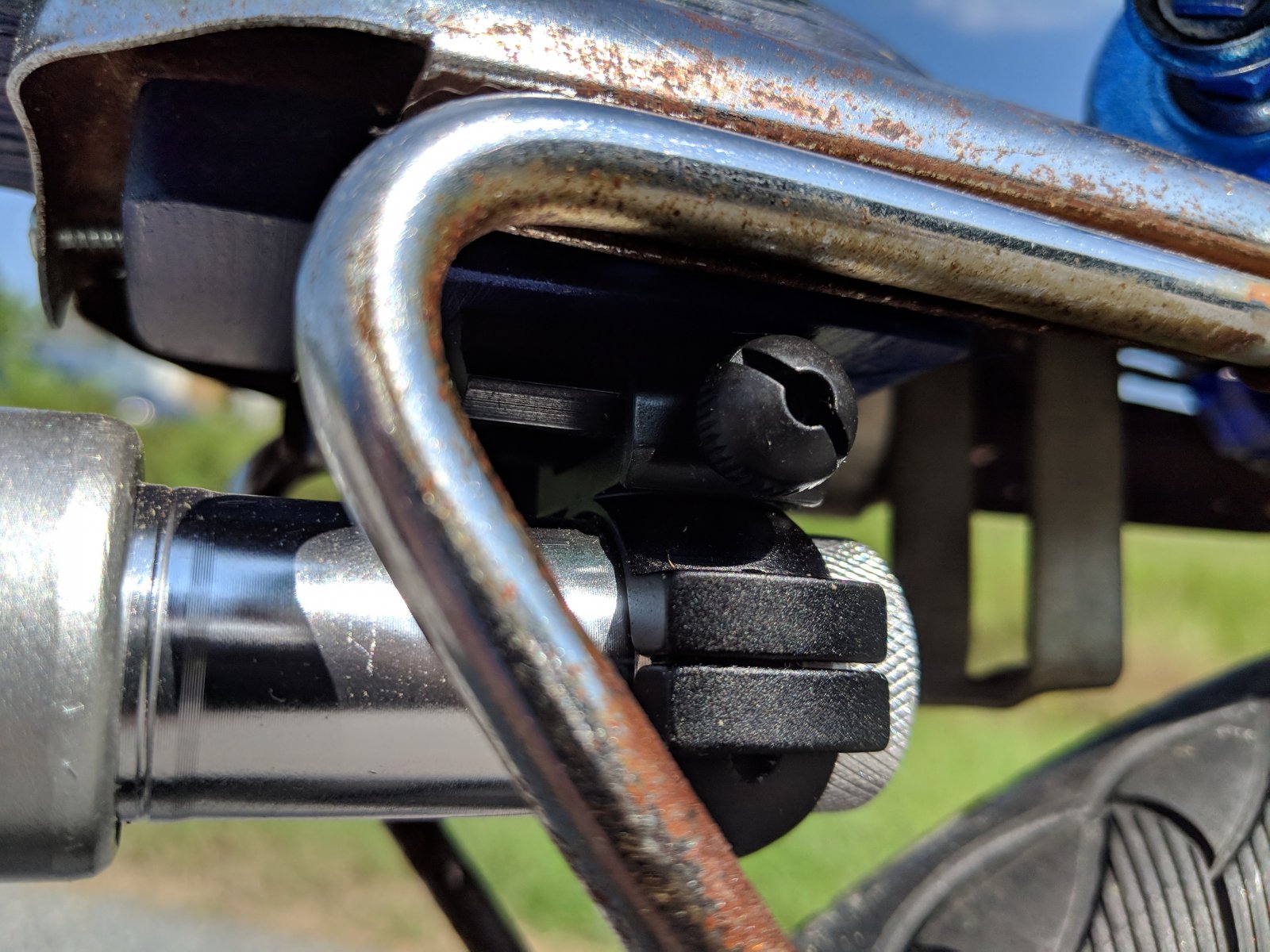 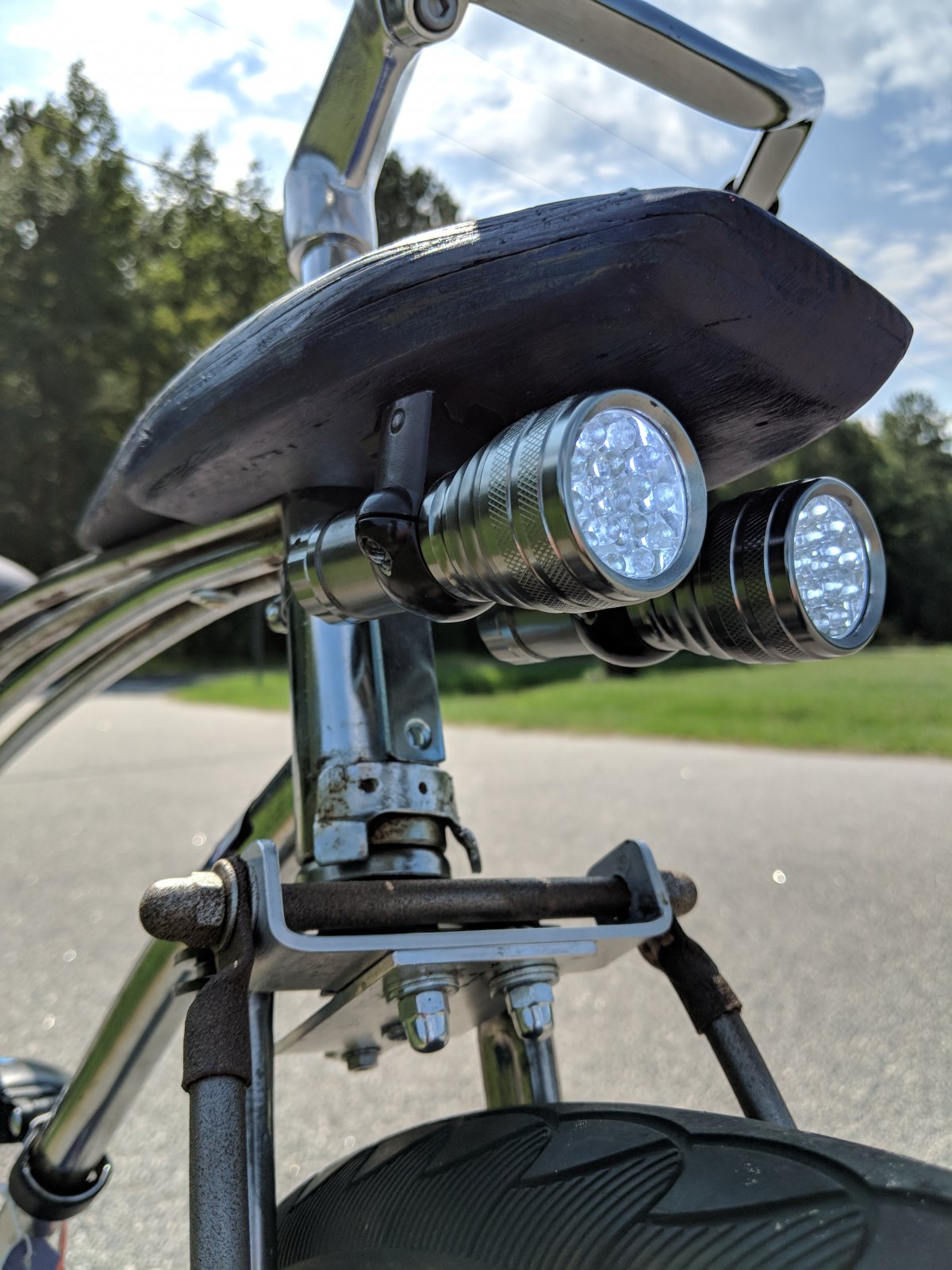 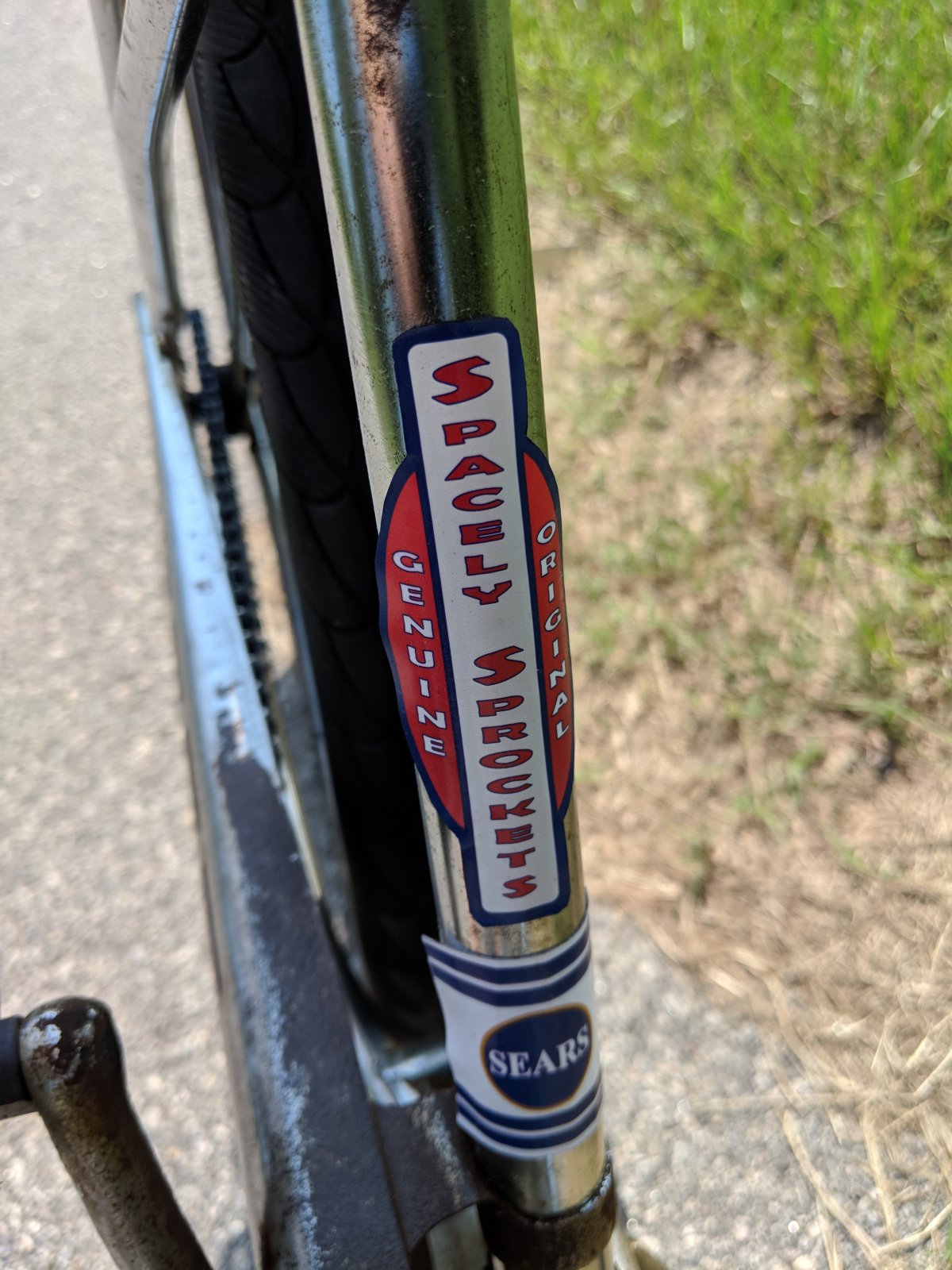 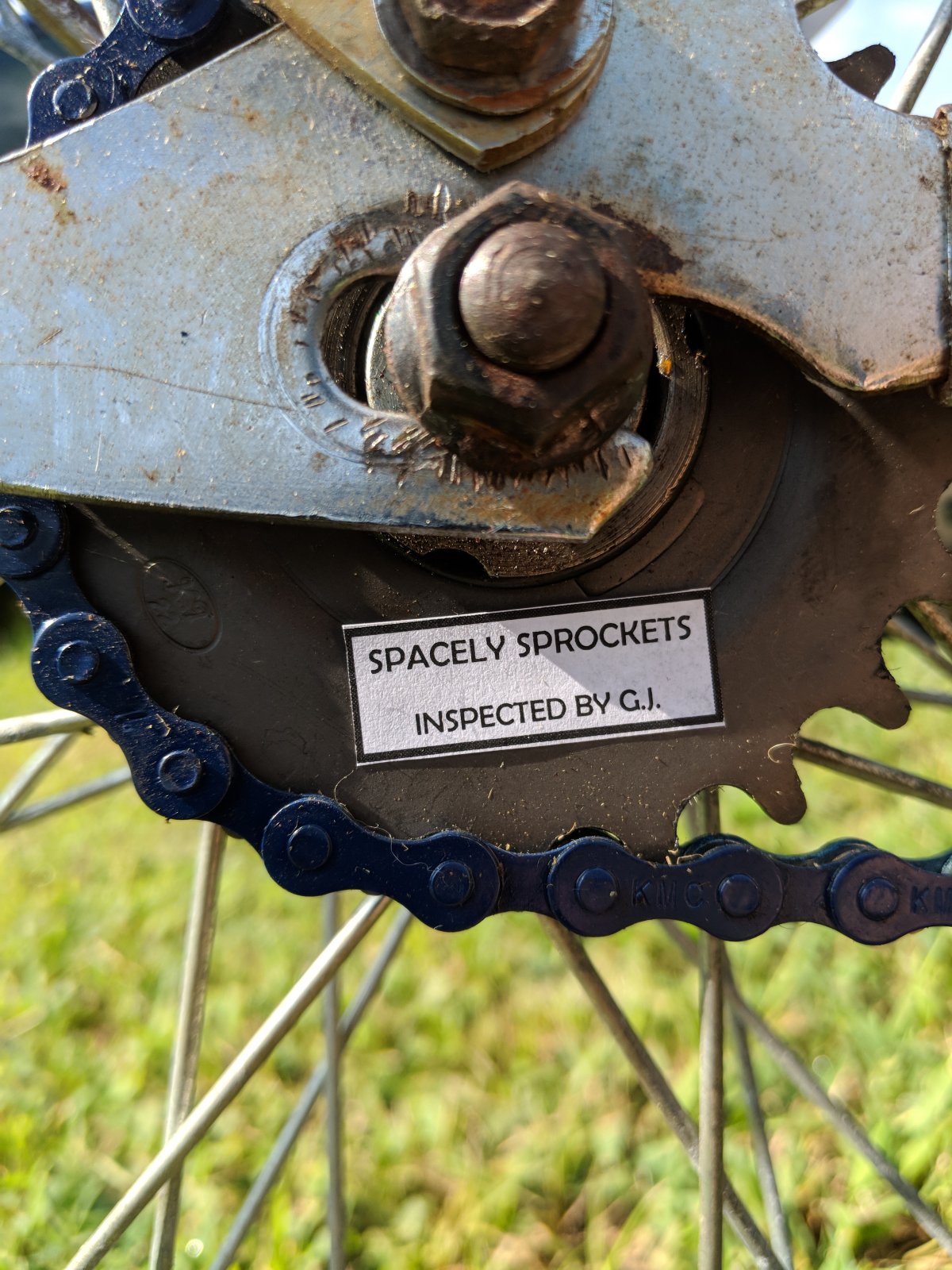 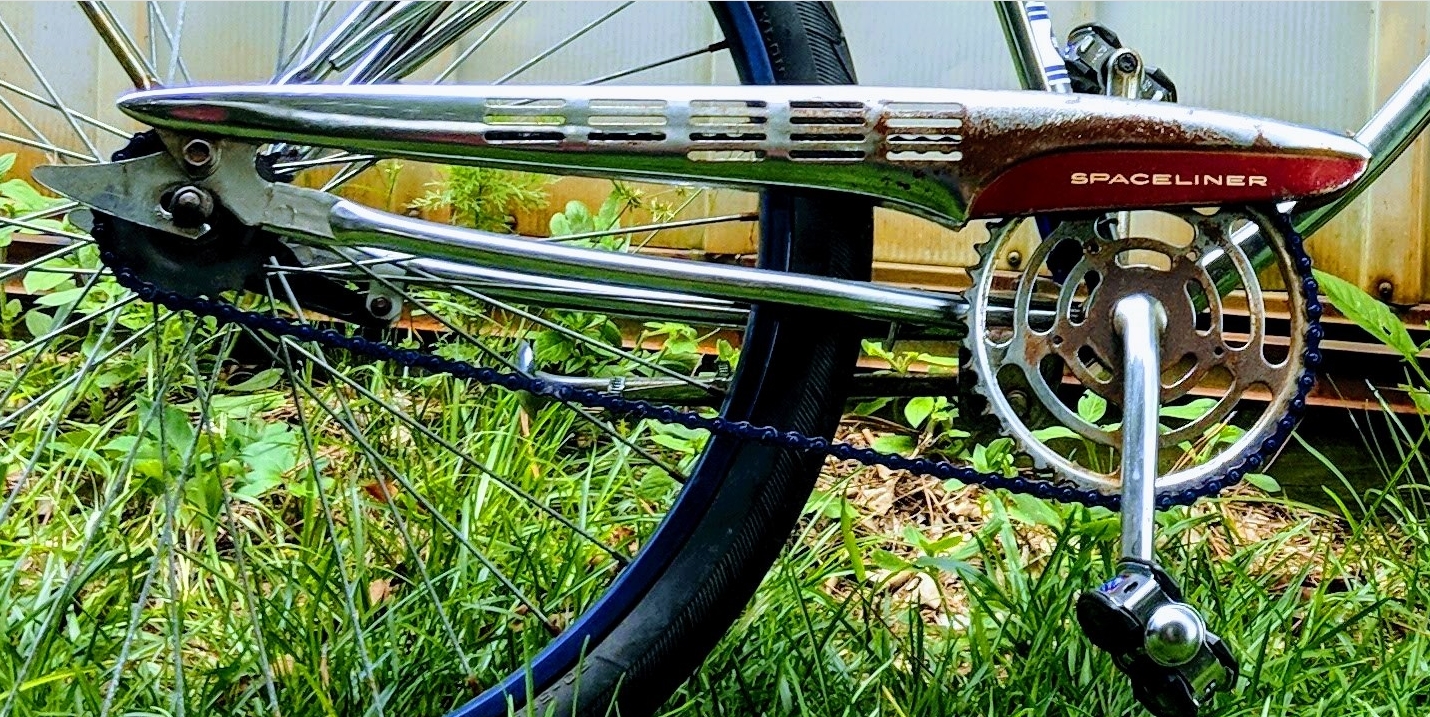 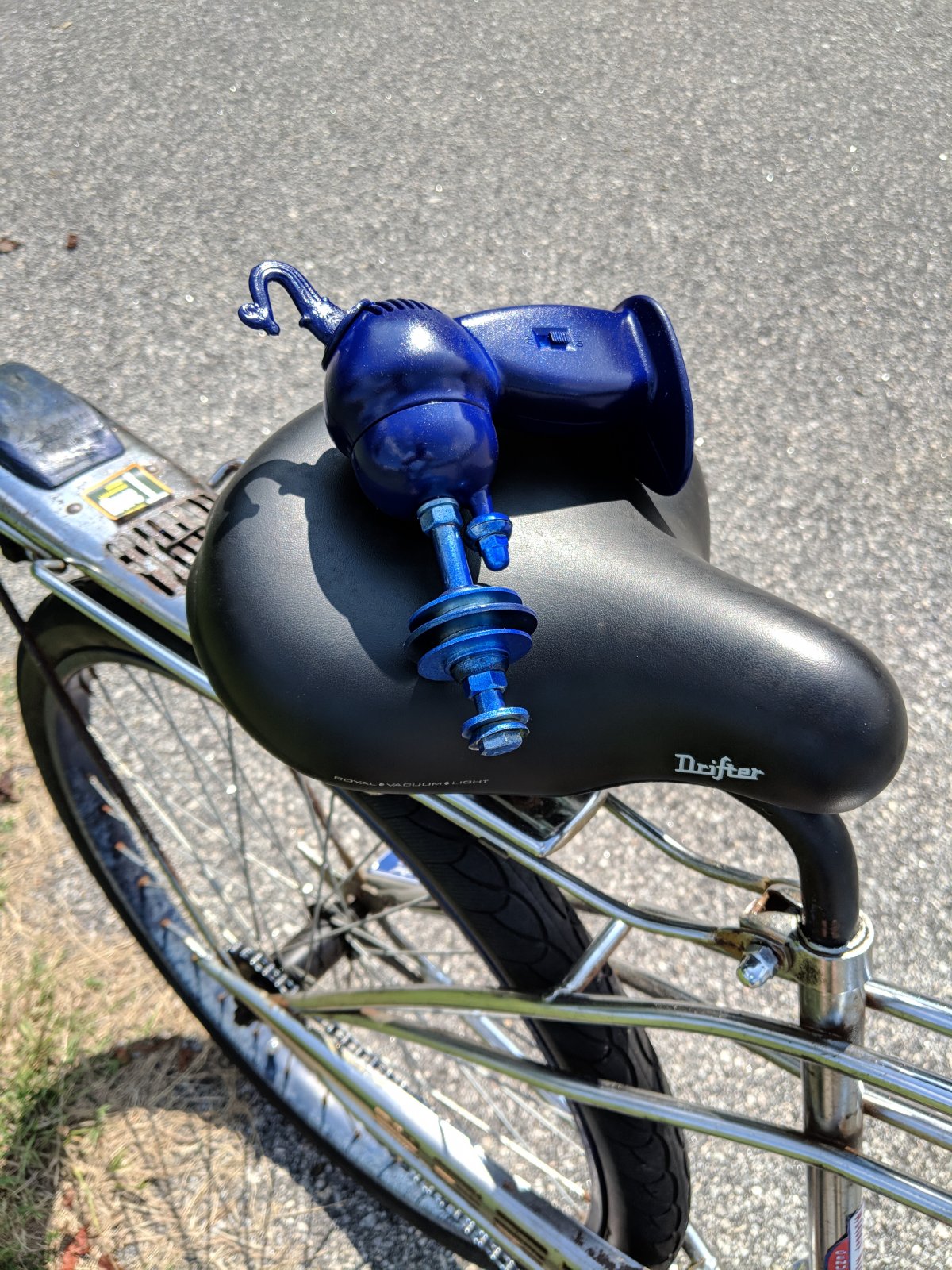 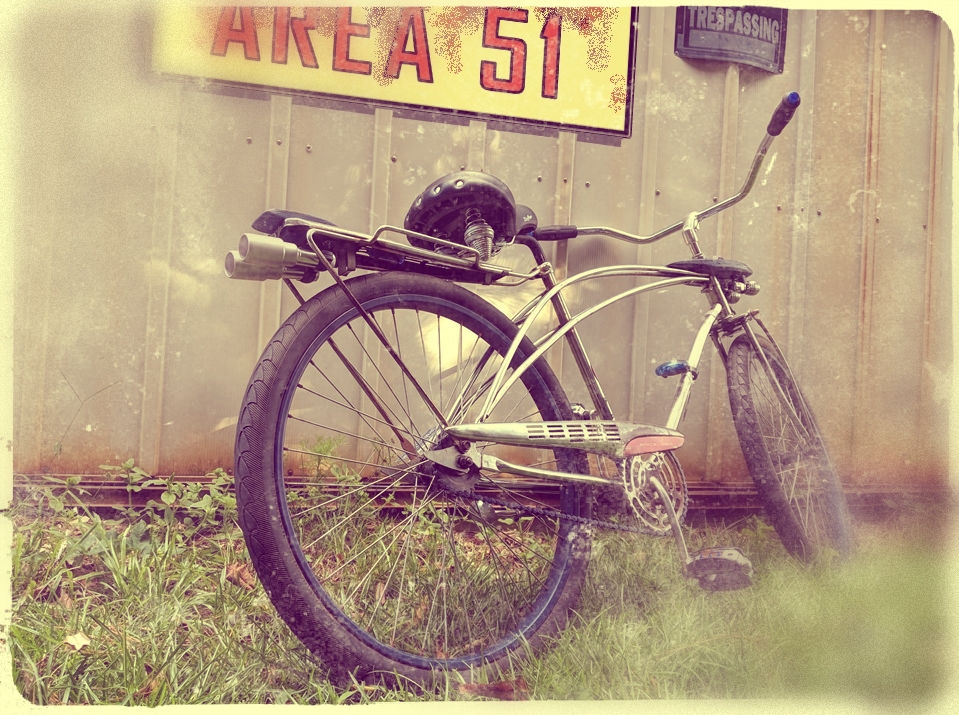 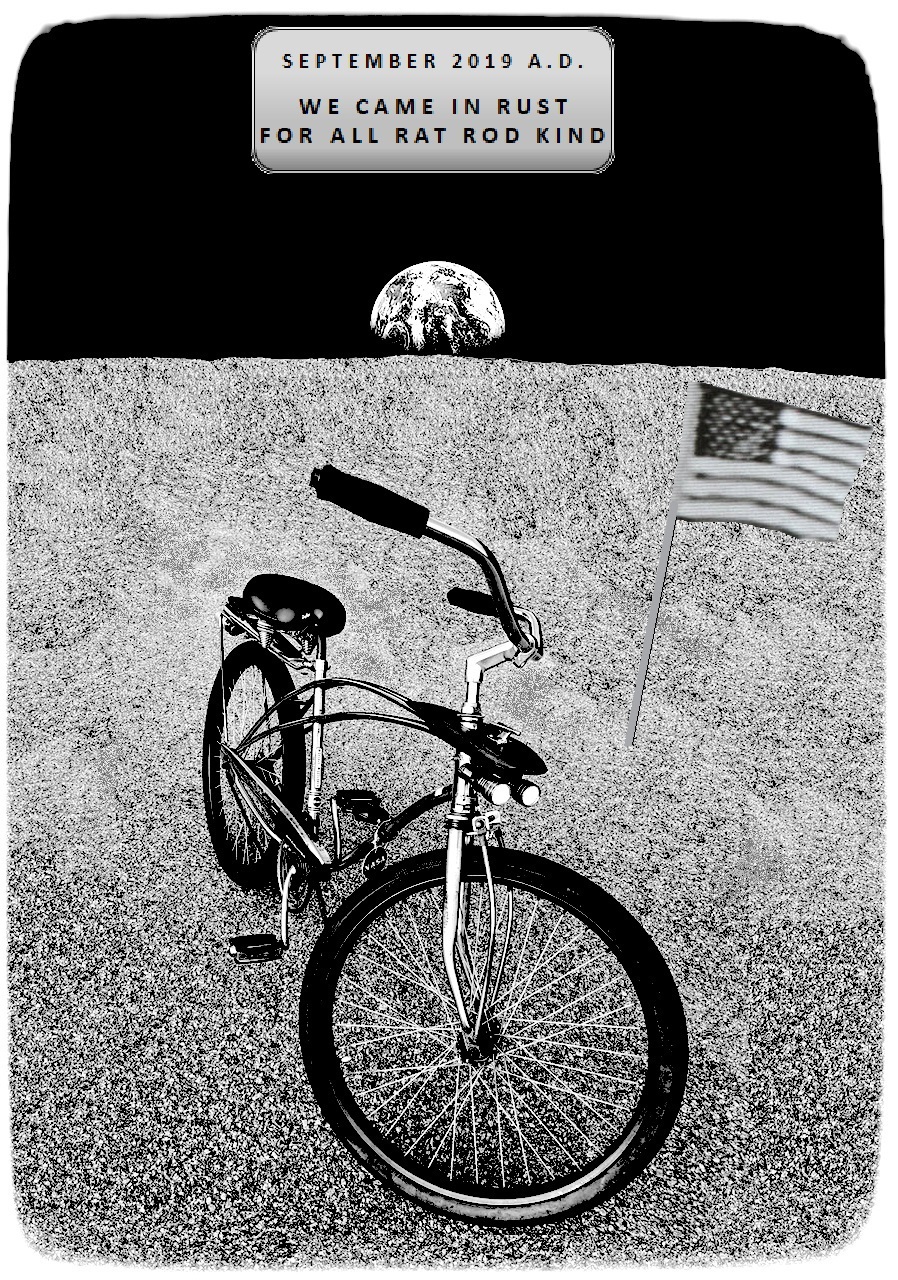 Here's what I started with... 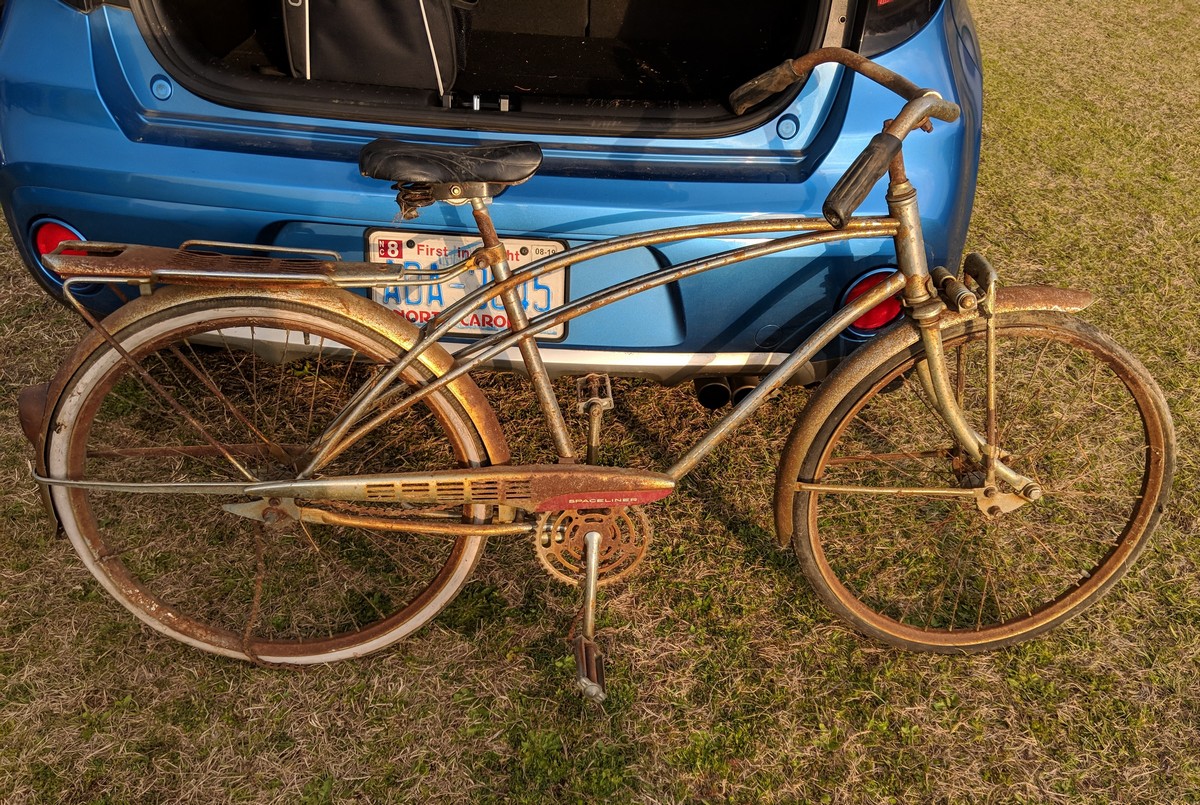 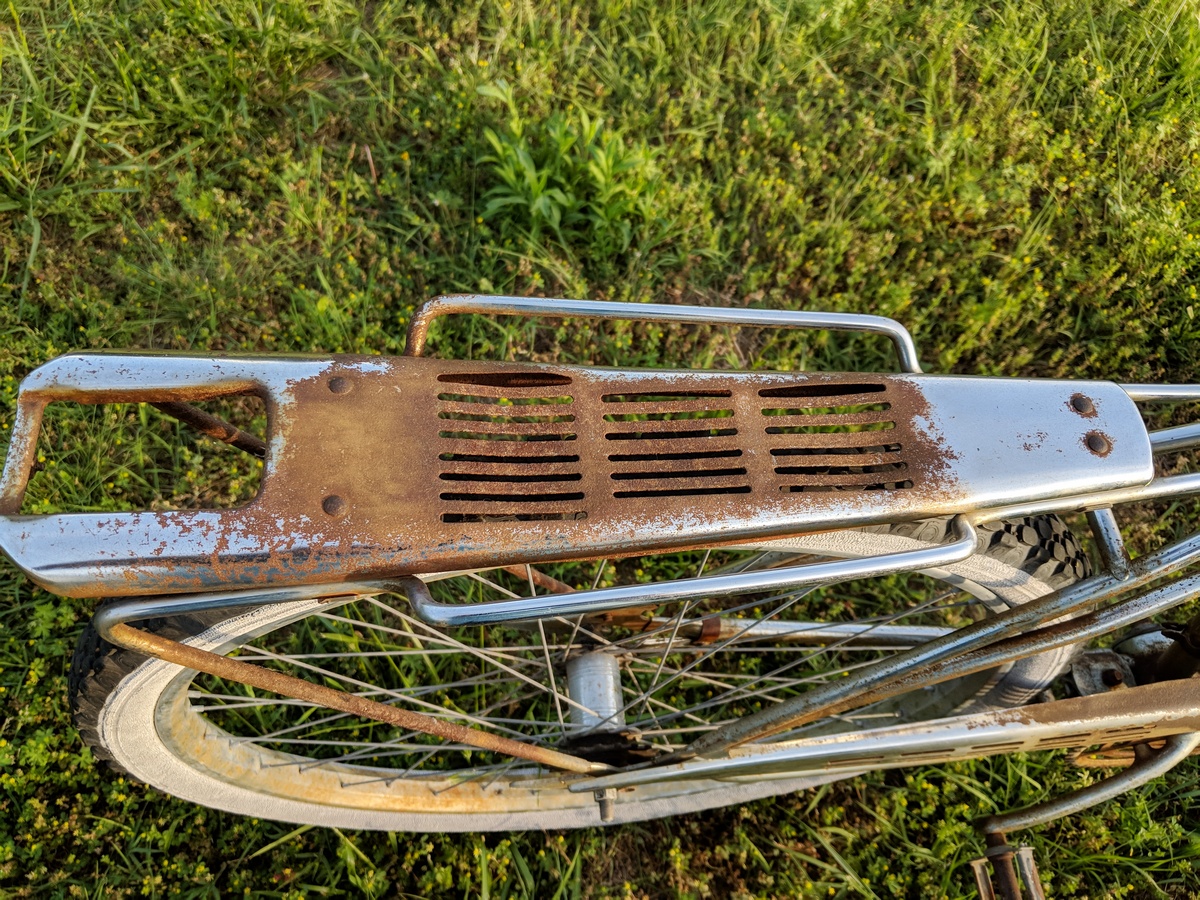 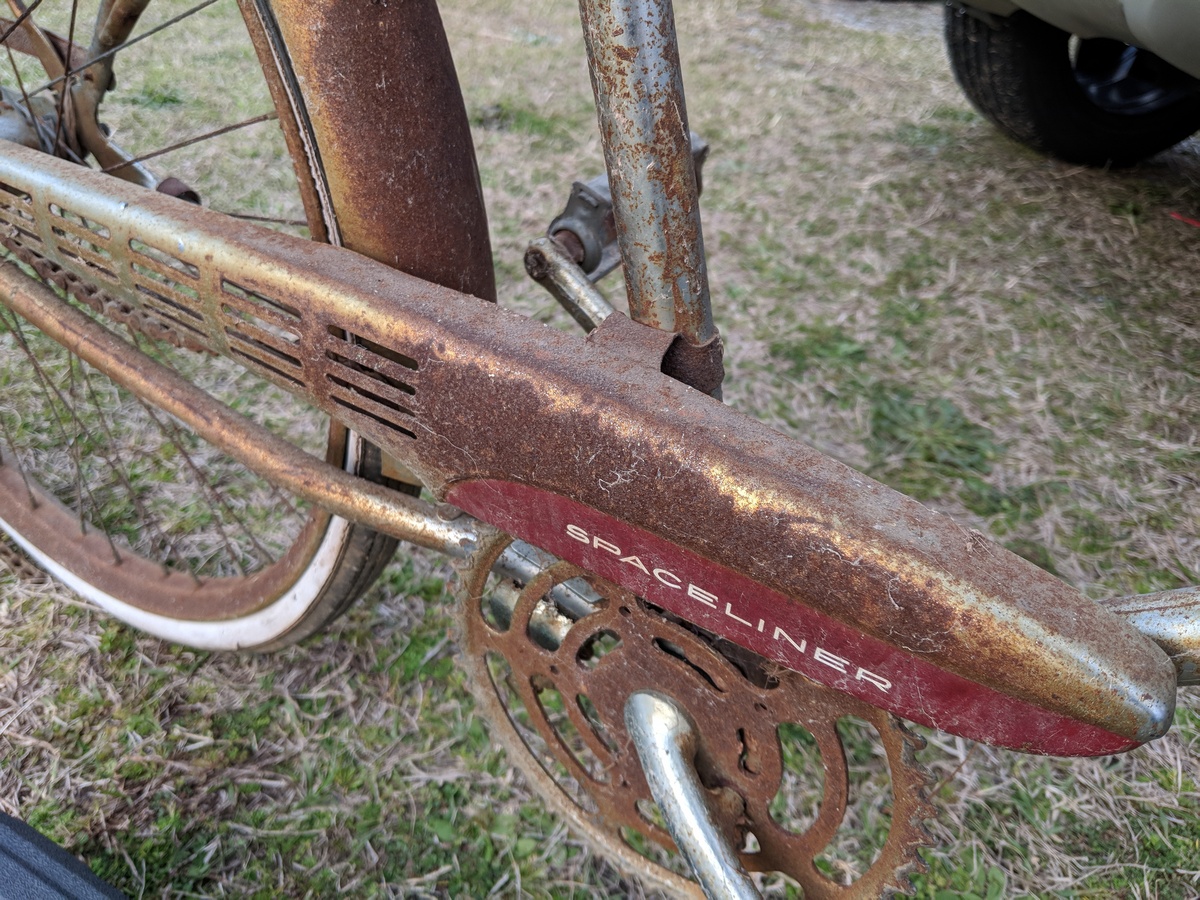 Here's the link to the build thread...
http://www.ratrodbikes.com/forum/index.php?threads/rust-in-space.108726/
Last edited: Sep 9, 2019
I have a one track mind, but my train of thought is easily derailed.
K

Check this video out...

I have a one track mind, but my train of thought is easily derailed.

Yep! 1" rings fit the flashlights just right.
I have a one track mind, but my train of thought is easily derailed.
K

Fantastic! I got a pile of them.

LOVE the dual headlight/taillight theme. The "jet-exhaust" taillight look is part of why I bought my '65 Impala.
--rick (one of the usual suspects at Retro-Ride Hagerstown)

Really like how you incorporated your Space / Rocket theme into this whole build! That night video is cool too. Well done!

fun bike - I dig it.
"It’s kind’a tough to grow old when your feet are sitting on a pedal!" -ZigoteLittle (RIP)
search eBay user ijt64 for Made in USA Thompson Classic ball end grips and coke bottle grips

Great build to follow. You really had fun with it and that is a big part of the build off for me. I love all of the space doodads you donedid.
BRAVO!

First, let me thank the other two people who voted for my bike! LOL

Second, I like this year's bike a whole lot more than last year's bike, for my first build-off. Last year's was more complex and it did score higher, but I never could really get enthused about riding it. In fact it now no longer exists. The seat found its way onto this year's build and a lot of other parts on on my Ross now. The Cranbrook frame went to the recycle dumpster last weekend.

Last year I did not have a classic American bicycle and wanted one so badly I built 52 Pickup to get a bike that at least looked sort of like a vintage American ride. But it was a fake with fake patina. This year I have three vintage American bikes ranging from the early 60's to the early 70's. They ride so much nicer than the Chinese Huffys. My Nel Lusso accompanied the Cranbrook to the dumpster, after it was stripped of anything usable. The Ross sports its red wall tires.

I could have added a lot more doodads to Rust in Space, in fact had several I was working on in my head to "Jetson-ize" it more, but I realized I liked the bike as it is. The extraneous doodads would have been to simply garner more votes, not improve the ride quality so to speak.