Was informed that there was a build off going and to throw my hat in so here she is again.

Well with little more than a week left before the Tour de Fat ride here in Tempe AZ I decided that my chopper just wasn't going to do. I've had this sketch sitting around on my desk for a few months now and with the tubing roller all set up it was time to get crazy! 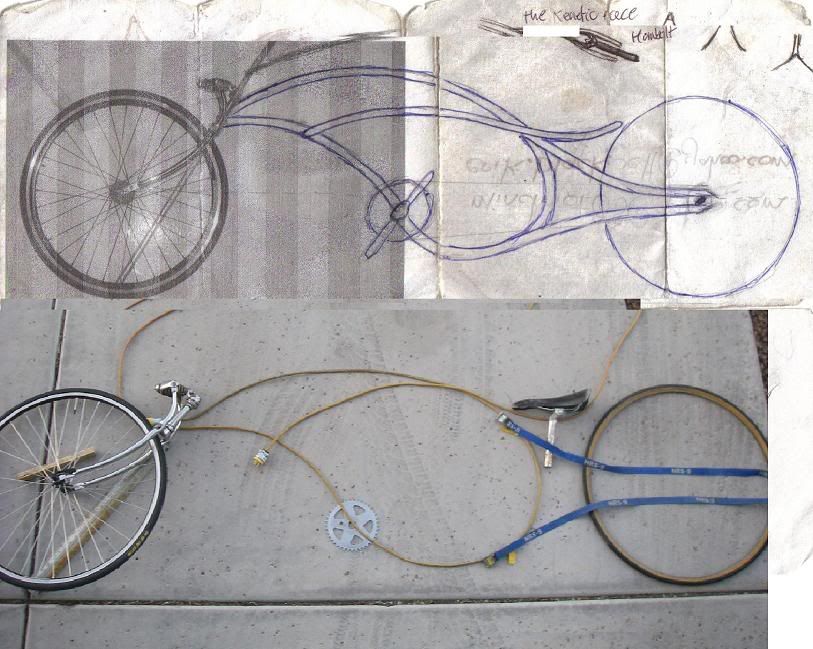 First things first. had to make a frame jig. I still have to make a BB holder but the frame support worked for mocking up the postition so I could mark it on the jig.

Now this is where it gets really fun!

Alot of eyeball work for this kind of deal. if the frame works out well I'll trace it onto plywood for easier recreation.

Looking good! Should have the main hoop all welded in tomorrow with the BB in place and time to start working on the rear stays.

I've got quite a wish list for this project: Nexus 3speed (or 8 ) internal with a disc brake laced into a 24" for a thick brick tire, Jockey shift, all internal cables, and a stereo. That's where the portable ipod dock comes in. I hope to mold it all into the gas tank for a super clean look.

can i borrow your tubing roller? PLEASE?
great start :mrgreen:
"WAKE UP AND LOSE"

Here's what I did today. Because it doesn't look like I'll have the 3 speed w/ disc in time for tour de fat I started detailing a 24" with a coaster brake. The tire is a 24" x 3" Thick Brick designed by "troy lee designs" saw it in the shop and it reminded me of the old redline hotwheels cars. unfortunately it won't fit up front so I need to decide what I'm going to run up there.

Finished one section of the main hoop and welded on the BB.

Made the "seat stays" and ran out of time to be grinding so I threw the wheels on to see how it sits. still have to make the chain stays but I'm out of tubing.

Have to clean up the pipe ends but they will stay open and unplugged. Love that rear tire!

Ran into a clearance issue with the front end so I'll have to put some little notches in the front so I can get a little more travel.

Mocking up the rideing position. I'll have to try a few sets of bars to see what feels right. Looks like apes would work but I'd really like to keep the whole thing low.

Further detail work on the rear wheel. Black and red spokes and red flanges on the hub. Rim is still chrome.

pvwacko said:
The tire is a 24" x 3" Thick Brick unfortunately it won't fit up front so I need to decide what I'm going to run up there.

actually it will fit.......just need to take the pivot bolt(the fork/lower steertube one) out and shim it :wink:
looks good and again can i PLEASE borrow the tubing roller?
"WAKE UP AND LOSE"

great sugestion... the simple ideas are sometimes the last to come. If you're in the area you are welcome to use the tubing roller but you don't want to pay for shipping. you may as well go buy your own.
Wacko's Garage http://www.wackosgarage.com

Here's what I did today! Spent half the day at the bike swap meet at build a bike in phoenix. However I found a chain ring that fits this bike perfectly.

When I got back to work I bent up and welded on the "chain stays" they look great but the bottom chain rubs a little on the bottom of the tube. I'll cut out a slot and weld in a little bit of round tubing to clean it up.

I also started finishing up the ends of the stays...

That's it for now, tomorrow a trip to the bike co-op to find a 24" front wheel to detail up like the rear. A second redline thick brick is on order.
Wacko's Garage http://www.wackosgarage.com

i LOVE the way that bike sits. bikes like that are the reason i come here
9ike Industries

Location
Deep in the American South

slow down, wacko, you're gonna scare away the competition if you complete this bit of awesomeness too soon

that's cool the way you used electrical cord to pre-visualize your curves. i accidentally "discovered" that method a coupla days ago when i mistakenly thought that sensor was doing it with what turned out to be an air hose. laying them out full-scale with the wheels the way you and he are doing it is brilliant.

Yep! you gona scare away the competition allright. I am thinking twice about throwing my name in the buildoff.

What are you using for tubing and where would one get it?

And I love your design.
My forgetter's getting better,
But my rememberer is broke.

Sorry about the speed with which this is going together! it just has to roll by this weekend for tour de fat. after that I'll slow way down getting the parts I want and doing the detail work. I have a truck mid engine swap that got thrown on the back burner for these two weeks. As for the tubing I'm using 16 gauge steel 1.5" (a little over sized) from my local metal supply shop. It's about $12 for a 10 foot stick so all in all I'm only in about $50 in steel to build this entire frame including the 3/4" tube for the cataliver bars. I'm also using 3/16" x 4" sheets for making the dropouts... probably got enough for 12 bikes!

If anyone in the greater phoenix area wants to play around with the tubing roller message me and we can arrange a time to meet up.
Wacko's Garage http://www.wackosgarage.com

Here's an update of todays progress!
First of all when I coasted the bike around the drive yesterday the front end was sagging pretty good. The old schwinn style spring just wasn't doing the trick with the front end as raked out as I have it. I cut down a chrome spring I've been saving and also found another to slide inside (I'll paint it red to stand out) just to look cool. World of difference, great ride now!

Rolled the cantaliver tubes and welded them on. I tack welded a scrap piece of frame tubing into the middle of the frame to give myself three points of contact to keep the arcs straight as I welded them in place.

I mocked up the rear wheel with a piece on conduit so I could bend and position the seat bars. I started to weld the pan in also. The whole seat will be wrapped with some kind of cloth that will be rivited in place. Going to sew in some diamonds to give it something extra.

A friend gave me a kickstand off an OCC bike that worked out perfectly! The arms even match the rear end of the bike. Say what you will about kickstands but I can park this anywhere now and not have to worry about finding a tree to lean it up against.

Here she is with the chain on so I could take it for a spin around the block. 2+ bmx chains to fit this bike! it's over 4 feet from axle to chain ring. Chain rubs the lower arm of the frame so I clearanced that tonight but no pictures in the dark. After riding it around I don't think I'll need to notch the downtube because I really can't turn that sharp anyway. one less thing to do before paint.

Tomorrow I have to figure out what I'm going to do for bars and hopefully get started on the tank and stereo. Would be nice to get the paint done but I know I'm going to scratch it up moving the take in and out.
Wacko's Garage http://www.wackosgarage.com

:shock: :shock: Thats one of the sweetest frames I've ever seen!!
Ben
My Intro: http://ratrodbikes.com/forum/viewtopic.php?f=9&t=3913
Patina + Rat = Me

Just curious but what's the wall thickness of tubing you used to build the frame? Looking pretty good so far!

Later Travis
Ride it like you stole it!
Cause wounds heal, Chic's dig scars, and pain never last forever!

dont you need struts on the springer? :wink:
If it was built in another country, odds are it's an import.

man,thats a beautiful frame your coming up with! :mrgreen: love the way the cantilever tubes turn into the seat pan!great job. 8)
member # 1072.

Picked up a 24" front and an oversized tube now I'm just waiting on the thick brick tire I ordered from felt. Finally found some bars I liked in one of my motorcycle mags. My version is a little bit of a hack job but they fit the look. They will be rotated a little lower but you get the idea.

Big push tonight was to get the stereo tank started. Cut some plywood to fit the gap in the frame and eyeballed where the power supply would fit.

got the power supply sunk in and the speakers mouted up. There are two pieces of plywood with a half inch space between them for wires.

Masking off the tank with a mock ipod in place. This is prep work for spraying the expanding foam I like to uses to keep it where I don't want it.

Sprayed the expanding foam onto half the tank tomorrow it should be ready to carve so I can fill the other side.