Pondo said:
Over 80 builds now, I can't keep up with them all. Way too much fun!!
Click to expand... 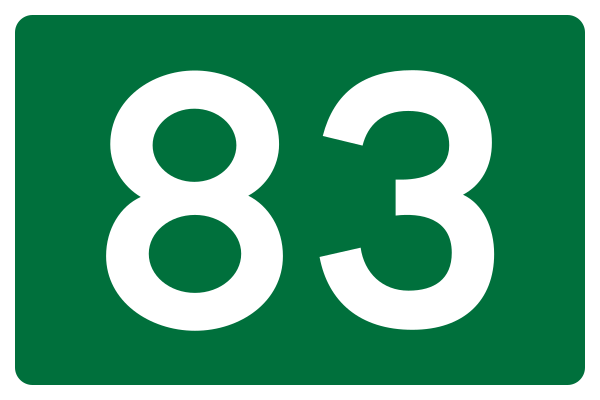 Pondo said:
I'd like to get this one but it's too far for me to drive to pick up a bike. It's a few hours closer for you, maybe an option? 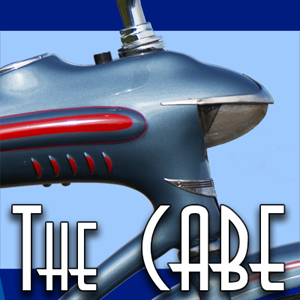 Kool 5 speed muscle bike project.its got 20x1 3/8 wheels.im sure its got some incorrect parts.as found condition. Cash pick up only.dm if interested and need pics

It's still a good 3 hours away for a bike that really isn't worth that price. I'm going to pass on it.

But thanks for the heads up!
Visit my build gallery: Crash's Build Page

I'm stealing these
Ricky, you have permission to swear and smoke.

curtisfox said:
Back in 1952 there where very few tard streets, just the main roads and streets, all side streets were dirt. LOL so all bikes back then seen more dirt then paved then you think, I can remember when I first road a skinny wheel 3 speed, get on dirt and there was not much control, tires sink in and wonder all over. Same with 10 speeds did you know that some of the first Schwinn had fat tires on them? I kick myself over and over for not buying a bike like yours at a swap meet for $150. Now days to find dirt to ride you have to out, except in alleyways. Just saying, I like your build, your finds, ............Curt
Click to expand...

Yeah, sometimes I forget that paved roads weren't as common in the decades before I was born. Odds are folks used balloon tire bikes specifically for those rough roads, like how we use fat tire bikes for snow now.

Yeah, there's a number of dirt/gravel bike trails around Tulsa, but I don't know of many actual dirt roads around here anymore. Most of those are just somebody's driveway around here!

Pondo said:
I think you should consider entering your bike in the off road section. It's got Klunker written all over it, especially with the knobby tires you're running on it now. The original klunkers were cruisers built to ride predominantly off road. They started out with single speed coaster braked bikes and eventually added front brakes, drum brakes, gears, etc. until they eventually started building purpose built mountain bikes.

Some of the original klunkers:

View attachment 216578
I evolved mine a few years to include gears since I live in the mountains and don't want to push my bike up all the hills but nearly all of the original CB bikes were single speed coaster brake bikes.

I think your bike definitely fits within the spirit and form of the early klunkers which were the direct predecessor to the modern mountain bike. There's no way to build one wrong as those bikes were all 'roll your own' style using what was available. Even if you're just going to do gravel roads and dirt trails and not race Repack or thrash your bike up and over Pearl Pass I think your build definitely qualifies as a klunker and off road worthy. Plus it's cool and fun!
Click to expand...

Thanks Pondo, both for the words of encouragement, and for sharing all those awesome examples of classic klunkers!

You know what, just for the sake of saying I did, I'll enter my Schwinn into the ORBO. Between you and a couple others saying it'd fit right in despite my tamer riding style, I figure it'd be okay to toss my hat in the ring.

Granted, I'm almost done building this bike, (I actually just took it for its first test ride today,) but there are still a few things I want to do before I can officially call this bike "done."

I just need to figure out how to structure my new build thread, since I already posted most of my progress since October 20th on another thread. Maybe I could start with a "highlight reel" of sorts, to cover what all I've done to this bike since October when I started building it, but leave a link to the original thread for those who want all the nitty-gritty details displayed in real-time. I'll figure it out.

Bike from the Dead said:
I just need to figure out how to structure my new build thread, since I already posted most of my progress since October 20th on another thread.
Click to expand...

I think the mods could maybe just move your existing thread to the offroad build off thread? Glad to see you're going to throw your 'hat' in the ring! No chance of missing the deadline with this build either.

Pondo said:
I think the mods could maybe just move your existing thread to the offroad build off thread? Glad to see you're going to throw your 'hat' in the ring! No chance of missing the deadline with this build either.

Really? I've heard of them being able to do that, but I've never had that done for one of my threads before. Shoot, if they can just move my whole build thread over, that'd be great! If I need to give someone a link to the original thread, here it is: https://ratrodbikes.com/threads/kasual-klunker-formerly-the-ratical-rustin-hornet.116790/

Wow, it's just that simple? Cool! Thanks dude!

Bike from the Dead said:
Wow, it's just that simple? Cool! Thanks dude!
Click to expand...

More where that came from

Home Page of The RSF, off road cycle, mountain biking and touring club

Off road cycling in the UK? Try the RSF, local groups in your area. Part of the RSF nationwide cycling club.Come for a ride with us..

Oh my word, there are some proper cycling photos in that archive.
Bad puns:
That's how eye roll 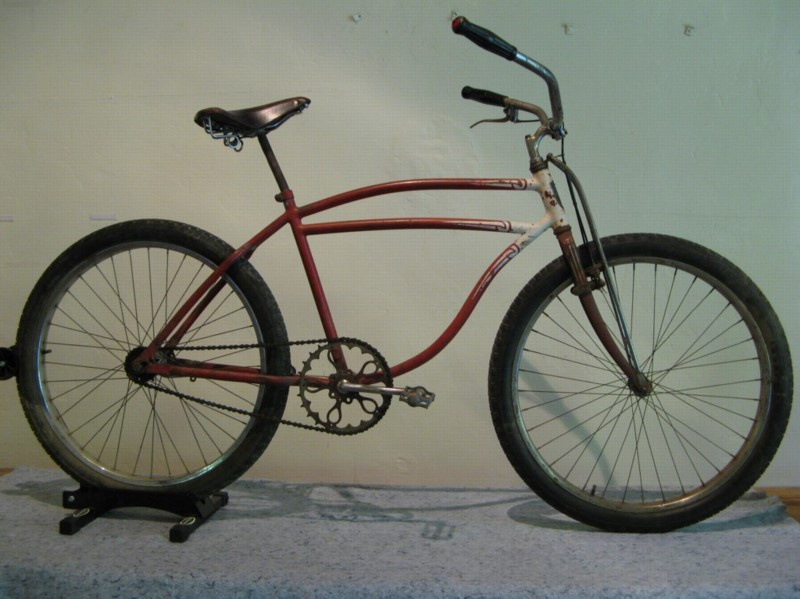 Apparently this bike was pretty quick! So was Joe! 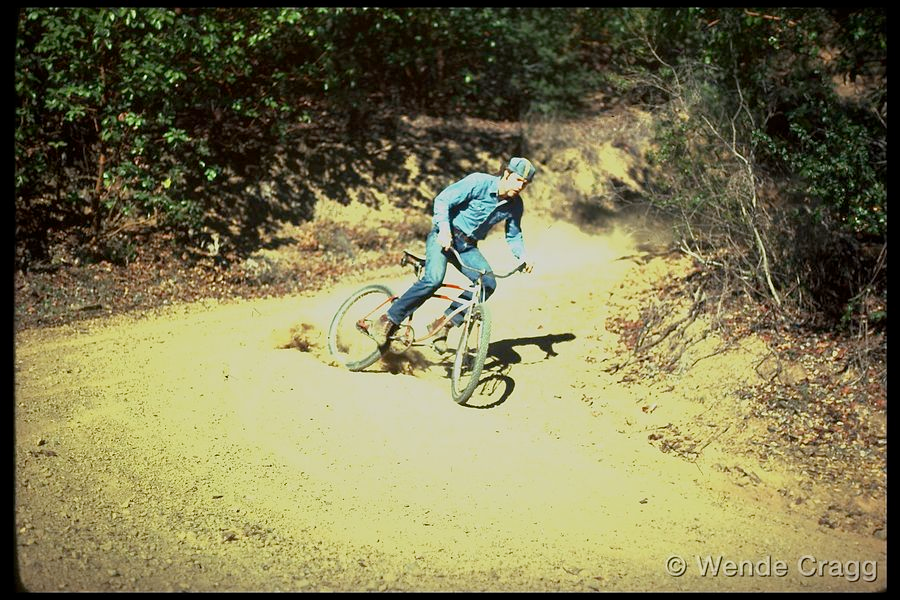 " Joe Breeze finding the groove on Otis Guy’s 1944 Schwinn Excelsior X one-speed in Switchback #2 (a.k.a. Camera Corner), on the way to his personal best time of 4:24, December 1976." -from the Marin mountain bike museum website. If I remember correctly that's the second fastest time down Repack. Gary Fischer still holds the record, also set on a klunker. Otis Guy's bike is single speed coaster brake with an added front brake. Those old bombers could haul the mail!

They're "official" records because they don't race there anymore. I think it's not disputed much out of respect. The bikes are so dialed in for this specific terrain now that it wouldn't be a fair fight 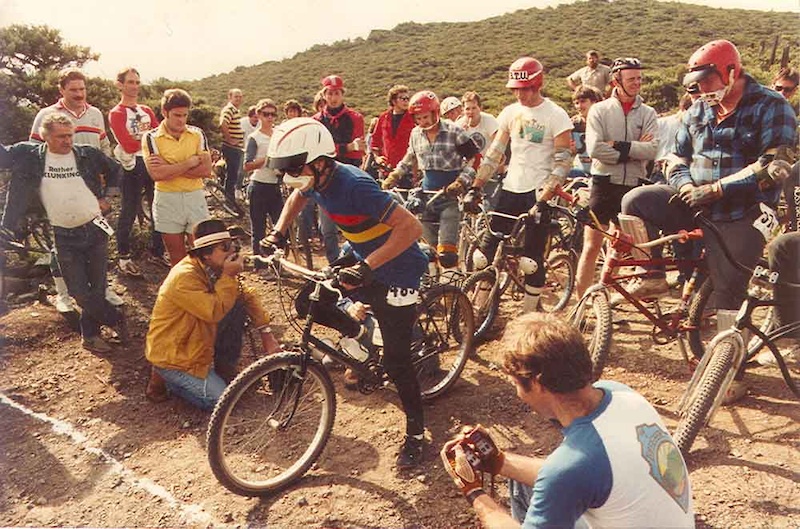 Riding down a gravel road has never been so historic.

MattiThundrrr said:
They're "official" records because they don't race there anymore. I think it's not disputed much out of respect. The bikes are so dialed in for this specific terrain now that it wouldn't be a fair fight

Riding down a gravel road has never been so historic.

Yeah, I guess it isn't possible beat an official record in a race that hasn't been held for nearly 40 years, even if you are quicker. The guy the wrote that article doesn't believe those guys went that fast back in the day.

"After the 1984 race, Marin County land and water managers made it clear that Repack, the race, could be no more. There was little resistance; the race’s time had come and gone."

That could be why the old records 'still' stand. People will still try to go quicker, which is totally fun and cool, but to compare apples to apples I think you'd have to do it on machinery and parts no newer than 1984. And maybe have Charlie Kelly starting and timing. Which would be really fun! Still, only 4 people have managed to put up times quicker than the original klunker crew, even riding the best modern machinery. And only by a few seconds at that. It's faster than I could go on any bike down Repack ever but my hat is still off to the OG Repack crowd.

over a current gen sports whatchacallit 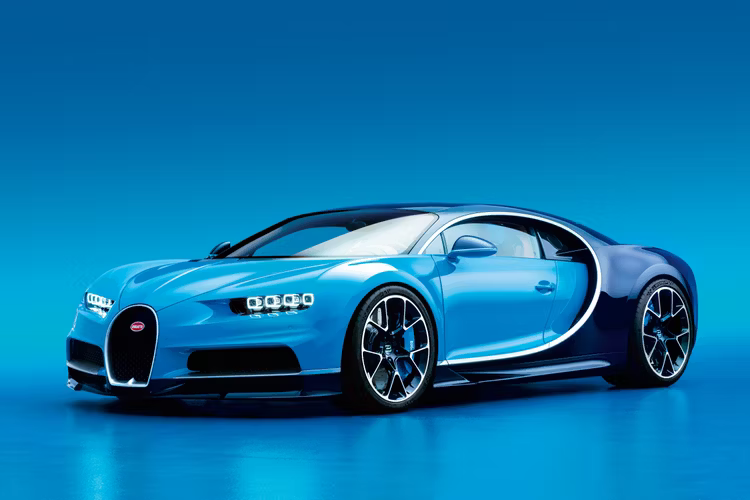 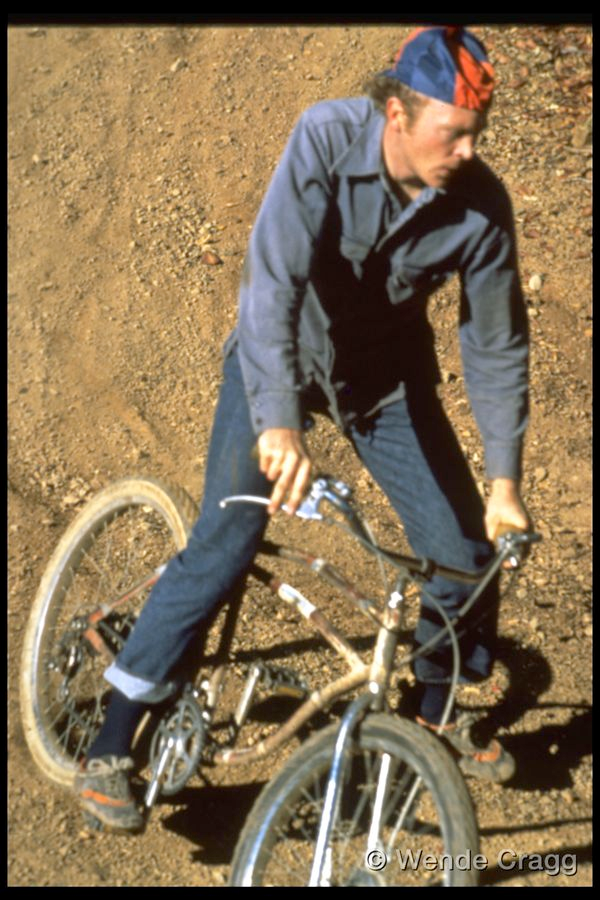 Wicked fast, just not my style: 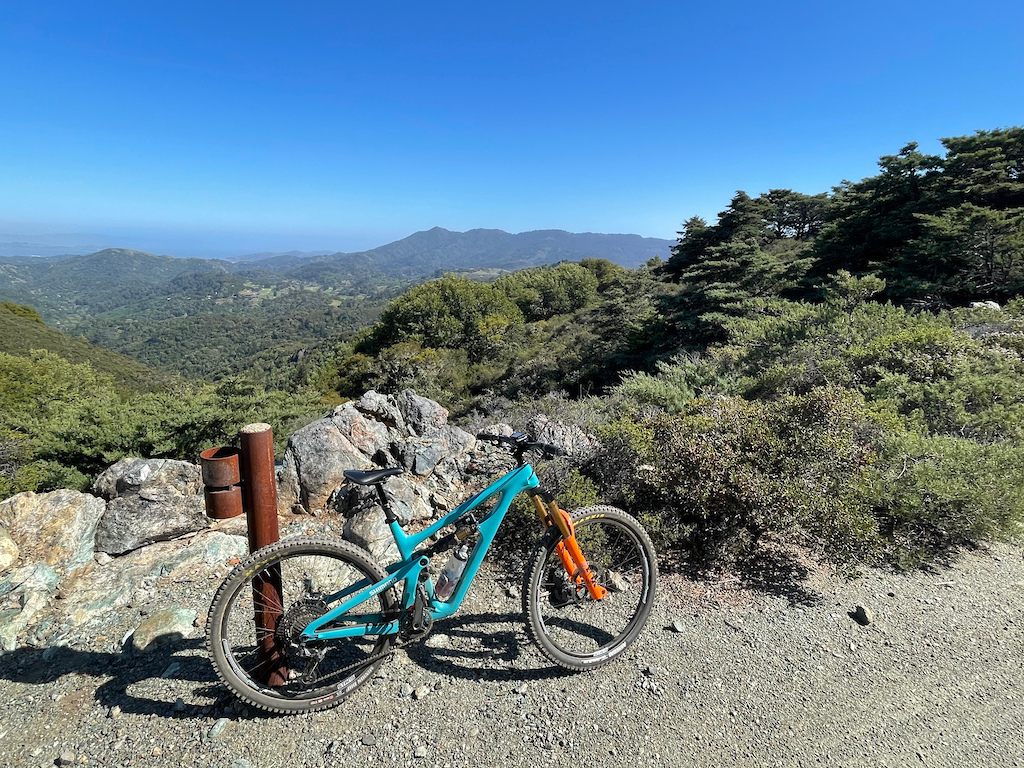 Like the Rolling Bones slogan, "it's not how fast you go, it's how you go fast"

more inspiration for builders and lurkers on the fence about joining the fun. 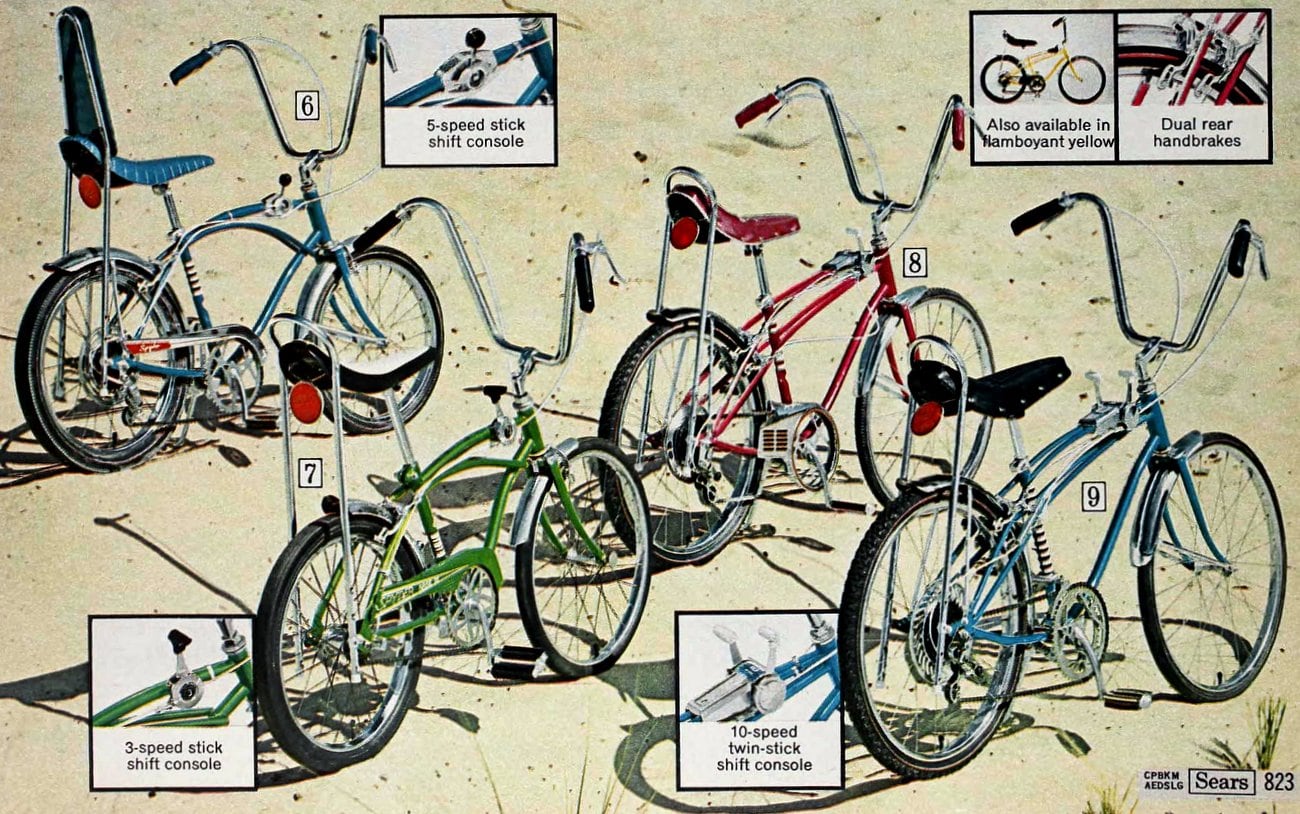 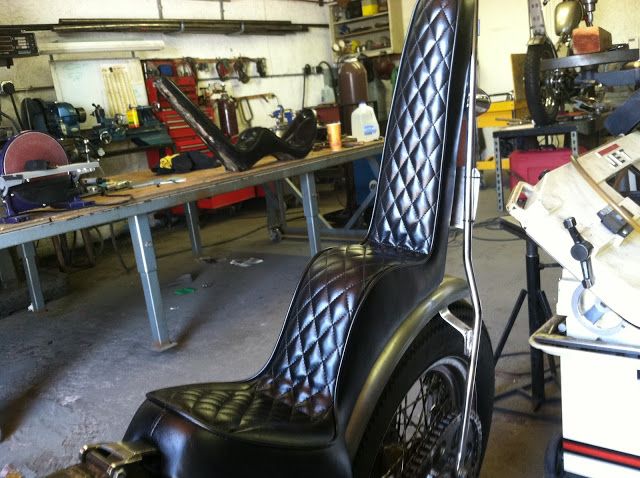 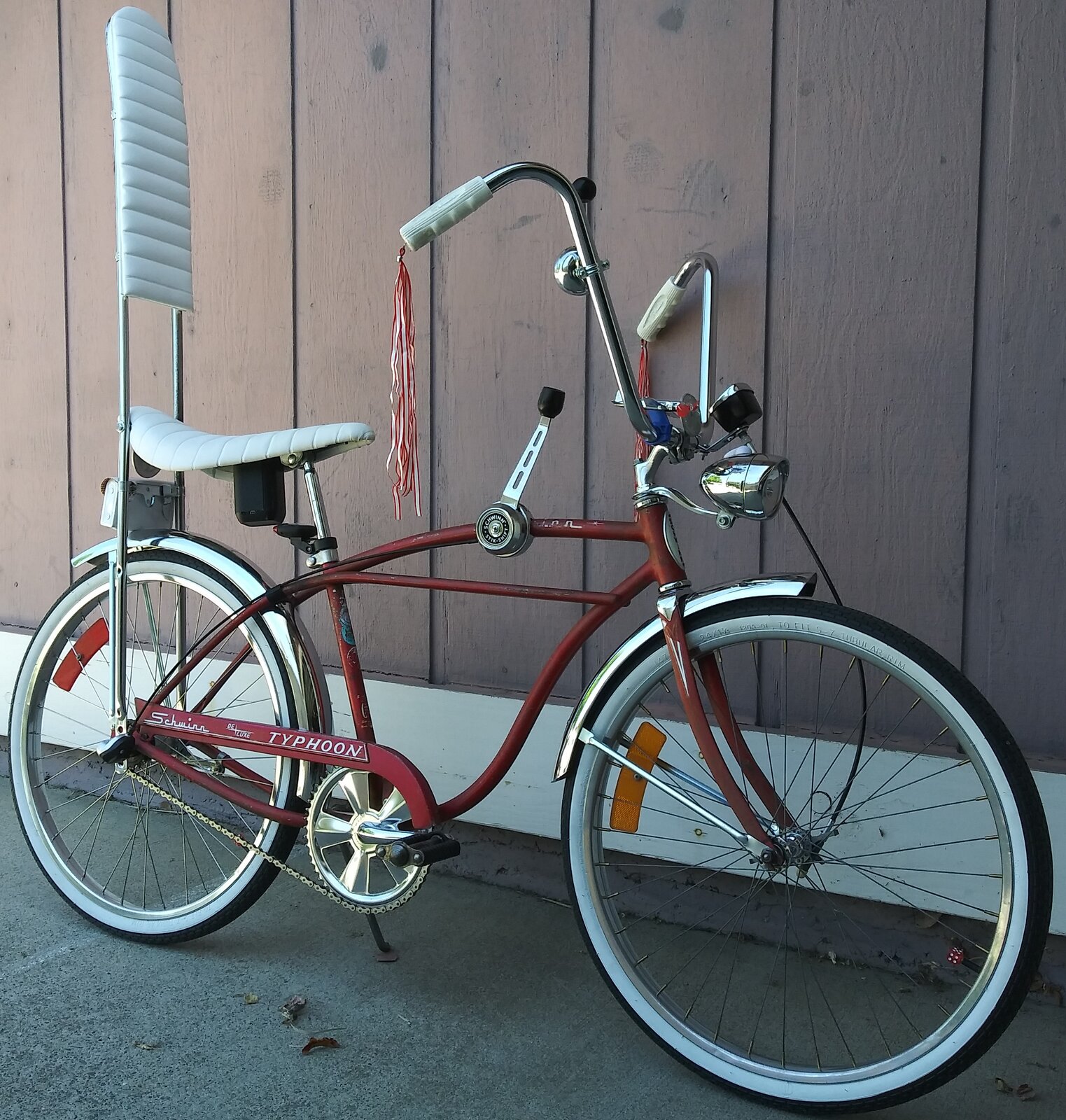 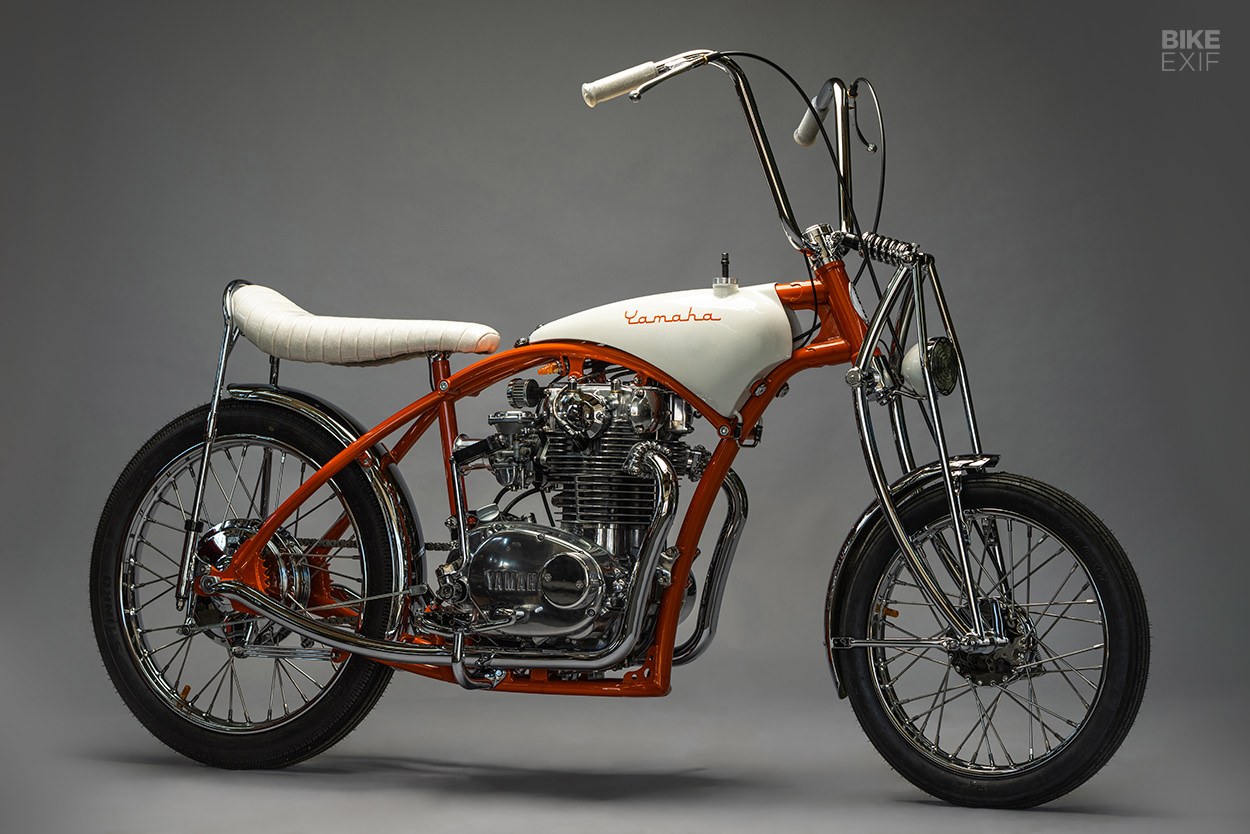 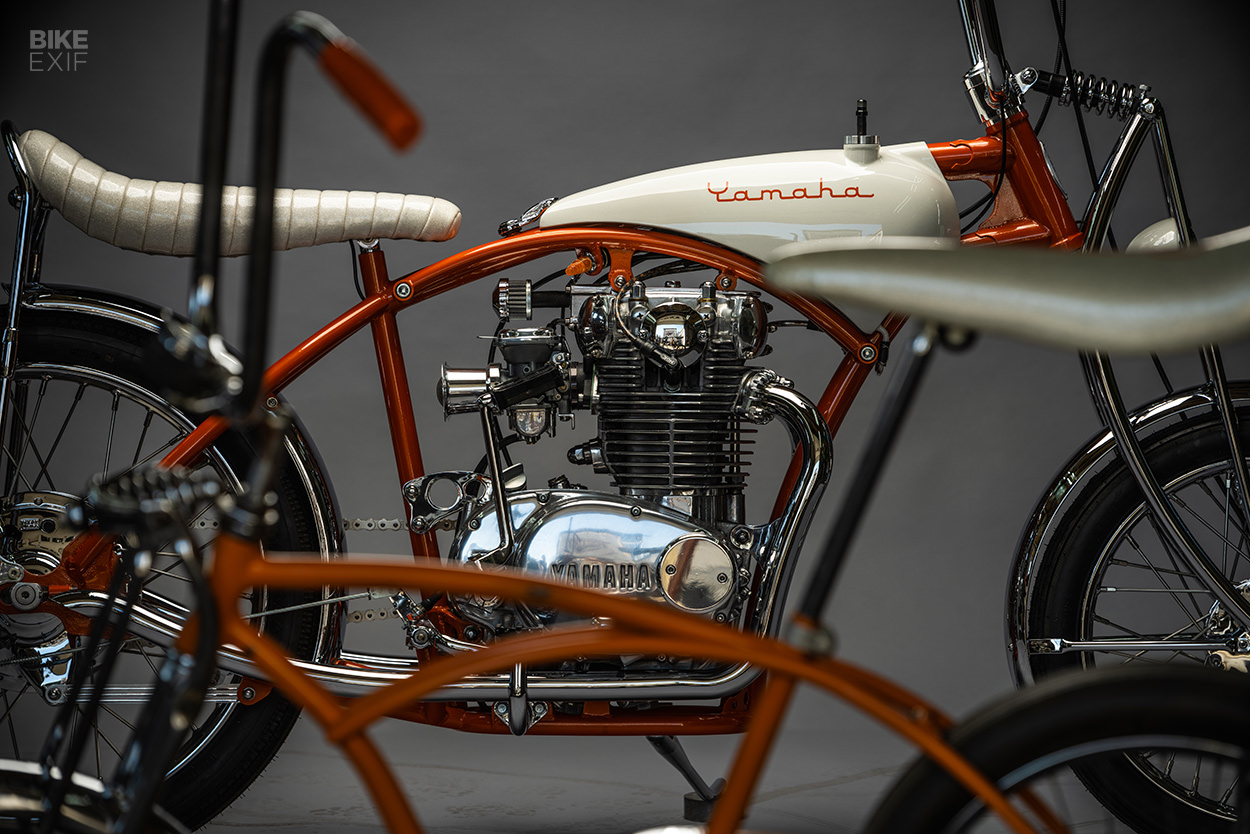 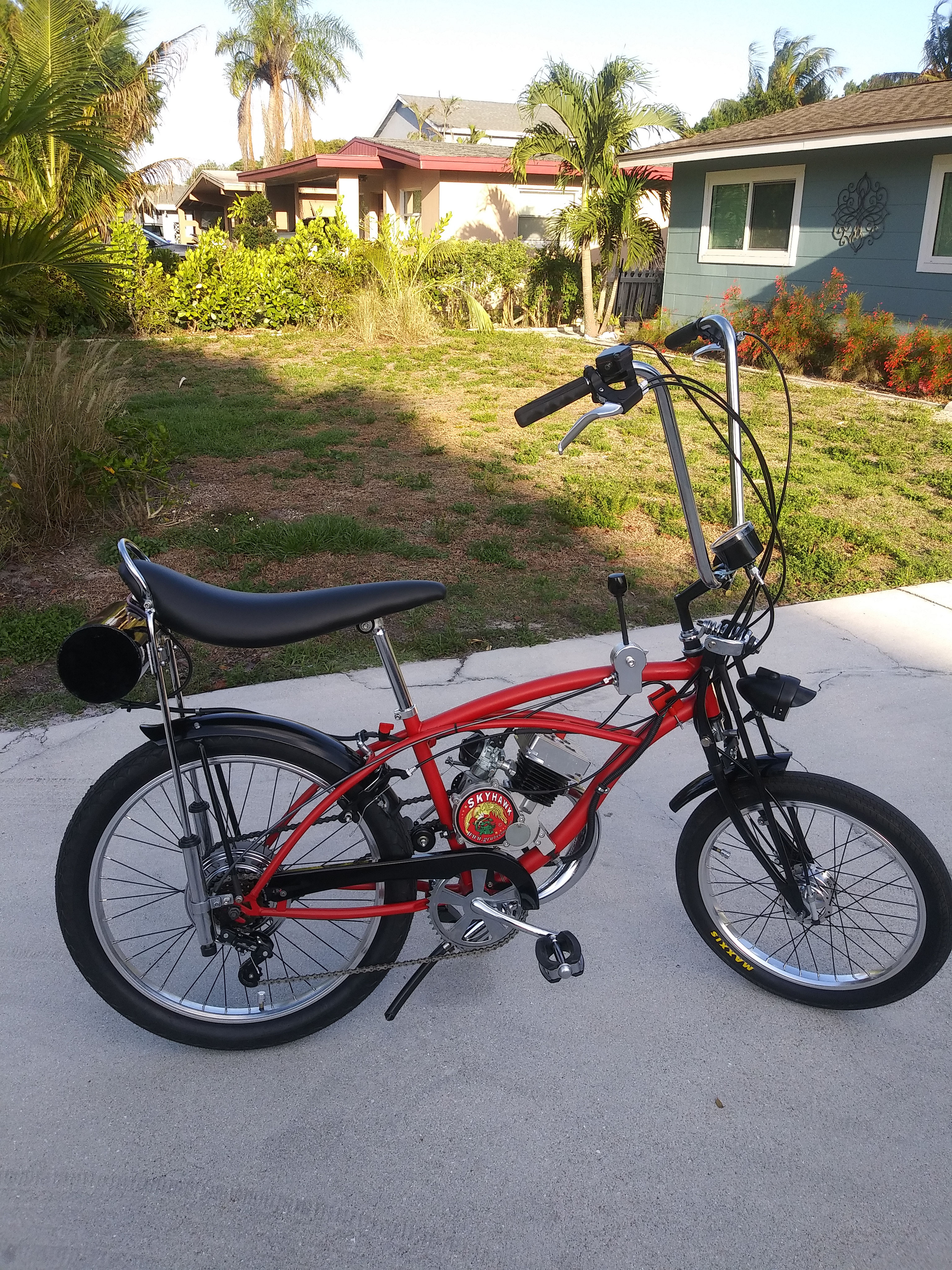 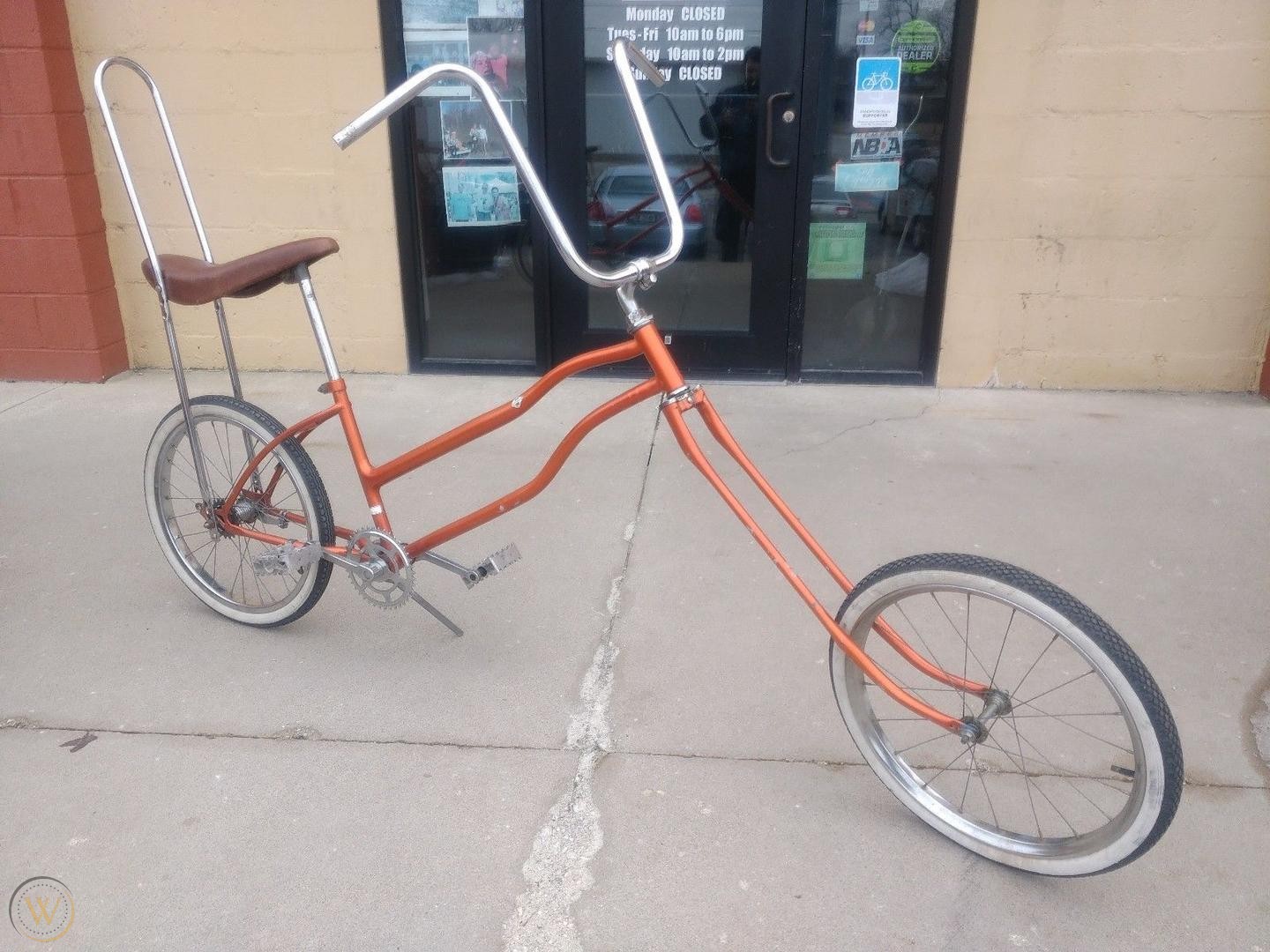 bikes were made to be pedaled if we don't ride them they get sad!! 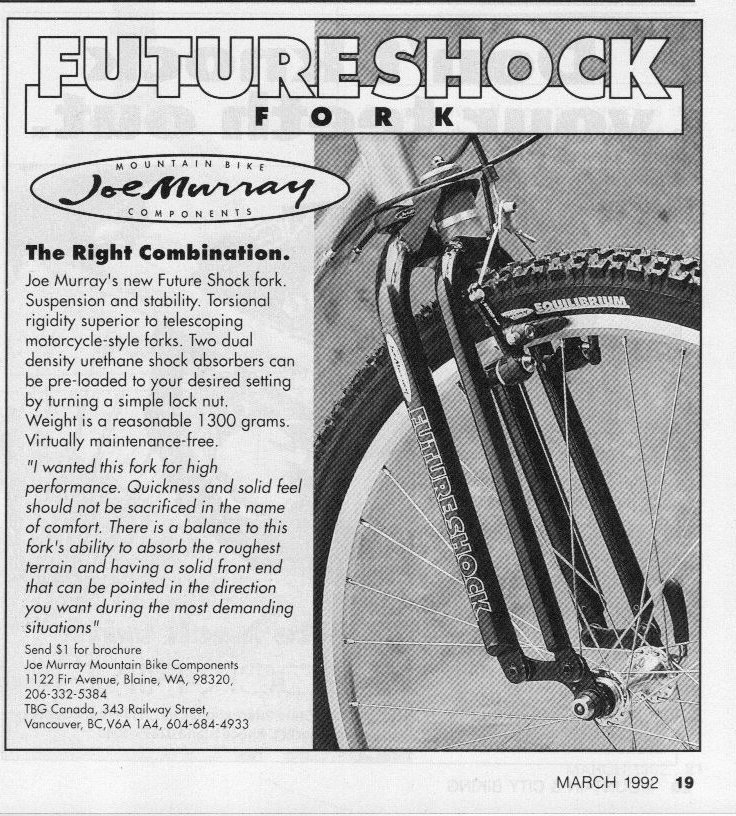 Would trade an organ for one of those...
Bad puns:
That's how eye roll

MattiThundrrr said:
Off road inspiration:View attachment 216719
Would trade an organ for one of those...
Click to expand...

Makes me think of a Monark springer, but with the spring position of a Murray rat trap springer. I bet some of the more fabrication-savvy builders here could probably build a version of that exact fork!

Skinny inspiration from Spicer Cycles. These guys are doing some stuff! 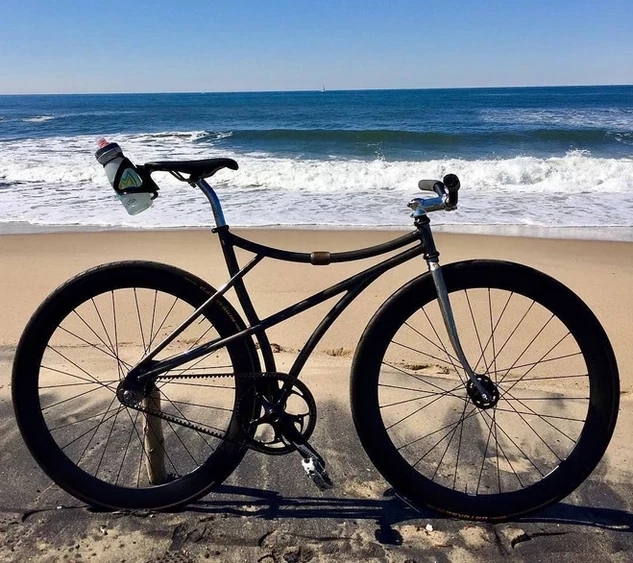 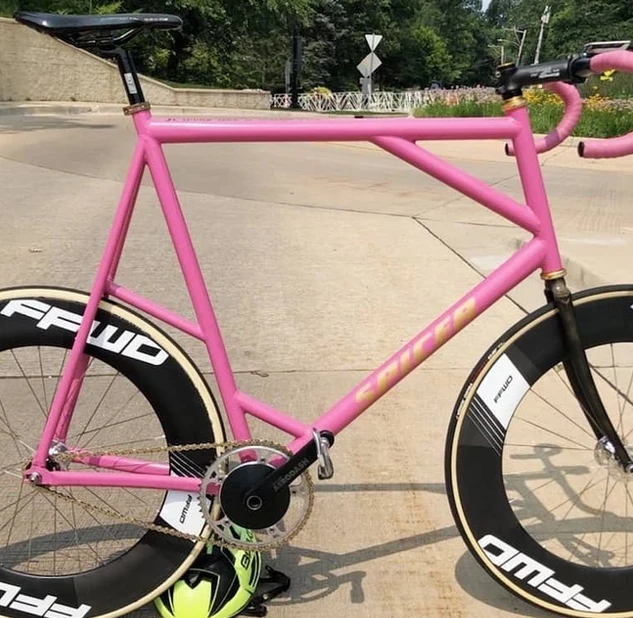 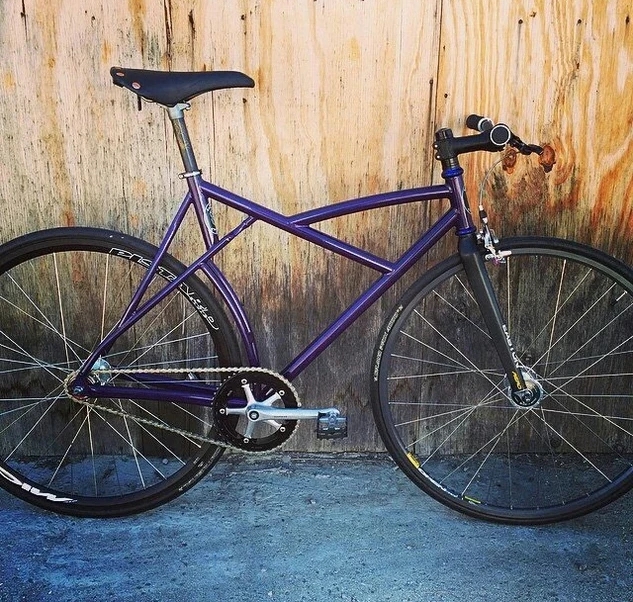 They really like messing around with the stay location, and my mind! 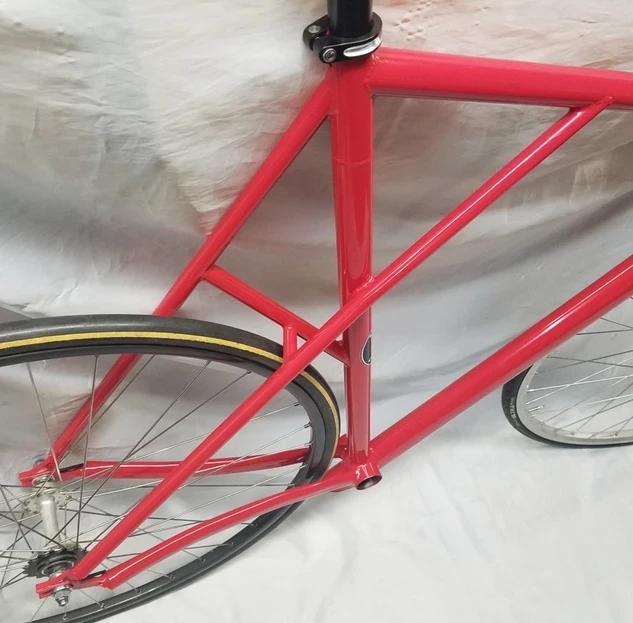 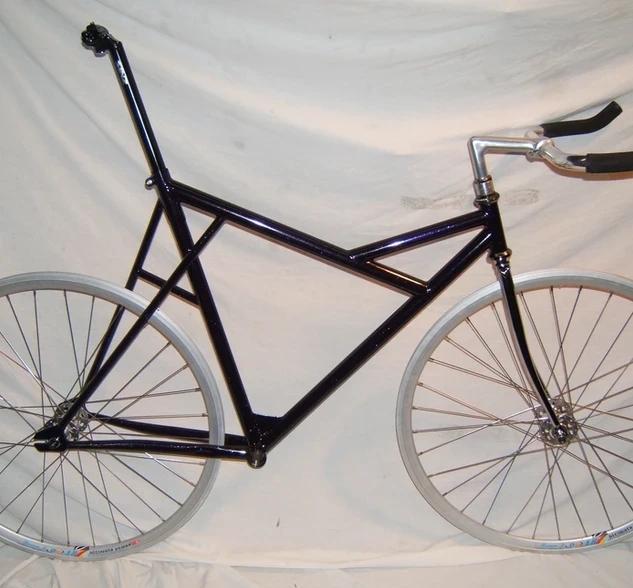