Re: Sir Loin of Beef

Here are some EXCITING! EXCLUSIVE! Photos from behind the scenes at the SIR LOIN OF BEEF photo shoot.

Here is a pic of some of the dangerous live animals and expensive props! 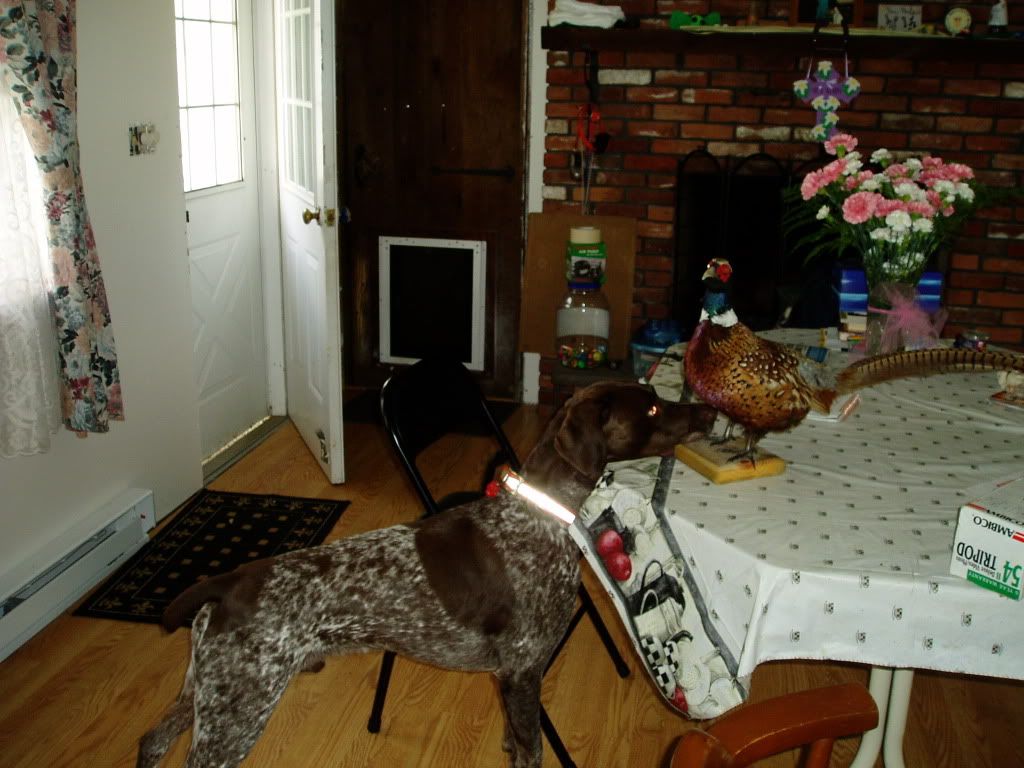 Here is an on the road pic as we travel all the way to the next town to shoot the Finished Bike photos! 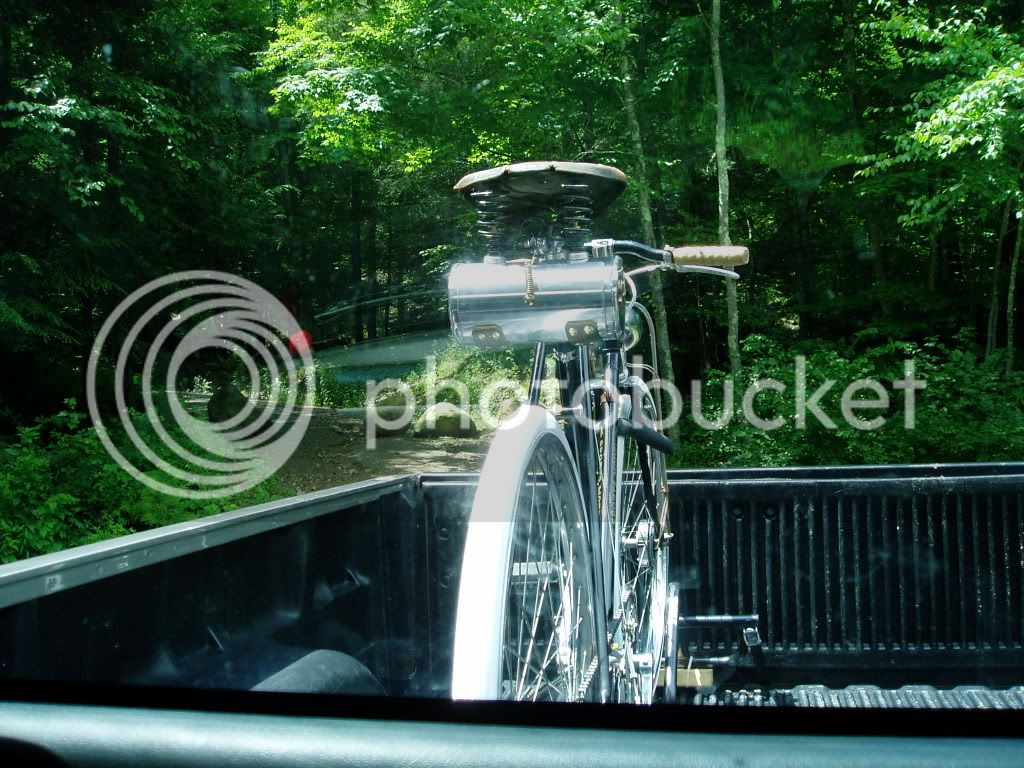 Only at Rat Rod Bikes can you see a sneak peek at some of the exciting locations we traveled to! 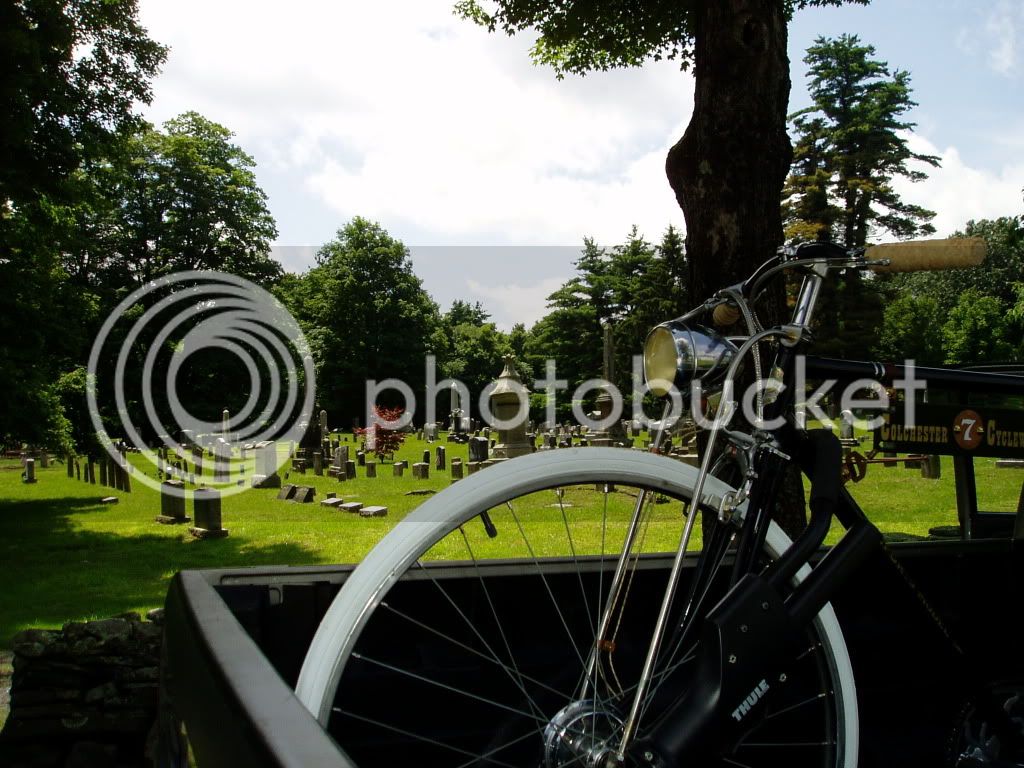 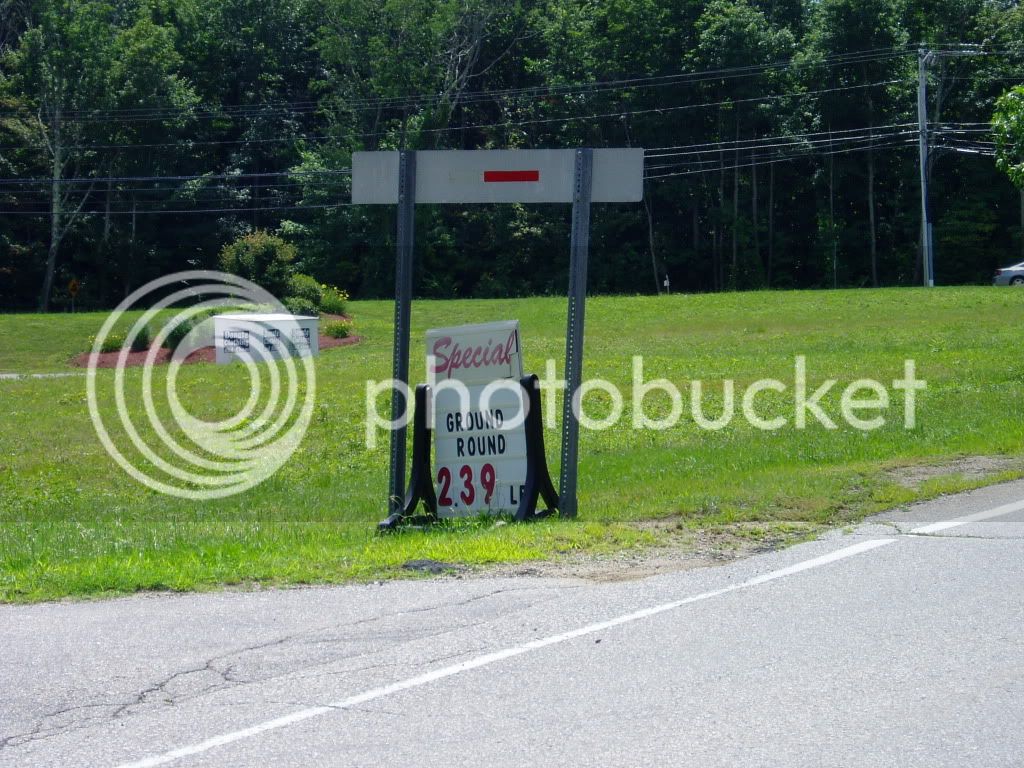 Why settle for ground round when you can have SIR LOIN OF BEEF!
Dumpster divin' since 2nd grade.

now why would you tease that poor dog?!?!?
hmmmmm......bike going out of town for final pics.........what kind of looser would do that(ooops! i did that last build off :wink: )
bike looks great btw
"WAKE UP AND LOSE"

How far does the bird have to be before he picks up his foot? Or is that reserved for live specimens? :lol:
it's all about the bikes, man. http://www.ratrodbikes.com/forum/index.php?threads/deormans-gallery.104059/
I was going to update my sig line, but I'm not seein' anything worth plagiarizing right now. 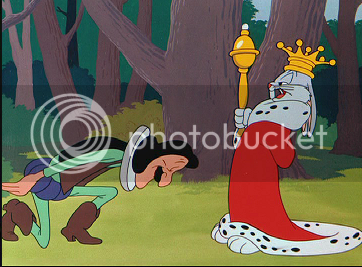 Re: ARISE! Sir Loin of Beef! Hit's the pavement!

I took S.L.O.B. for a nice ride today. About 7 miles from my house I crossed over the town line into Salem. I stopped to snap a pic of the 'town line' sign- 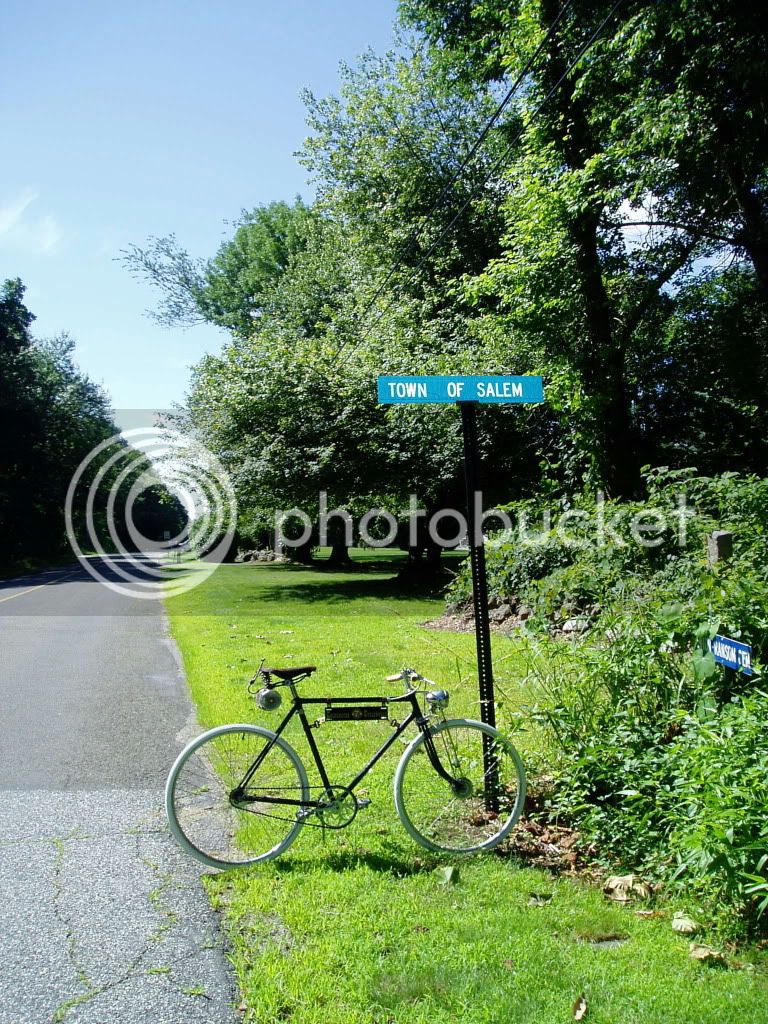 -when I noticed this sign I had never seen before. 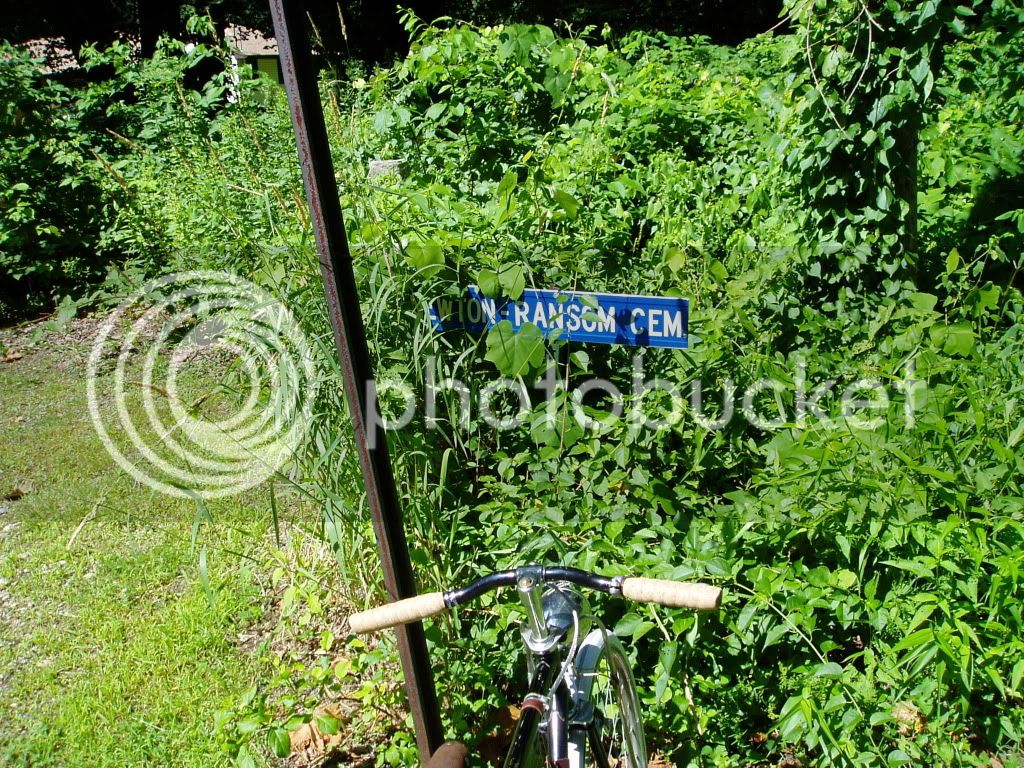 Upon closer investigation I discovered this. It was a Scooby Doo moment for sure. 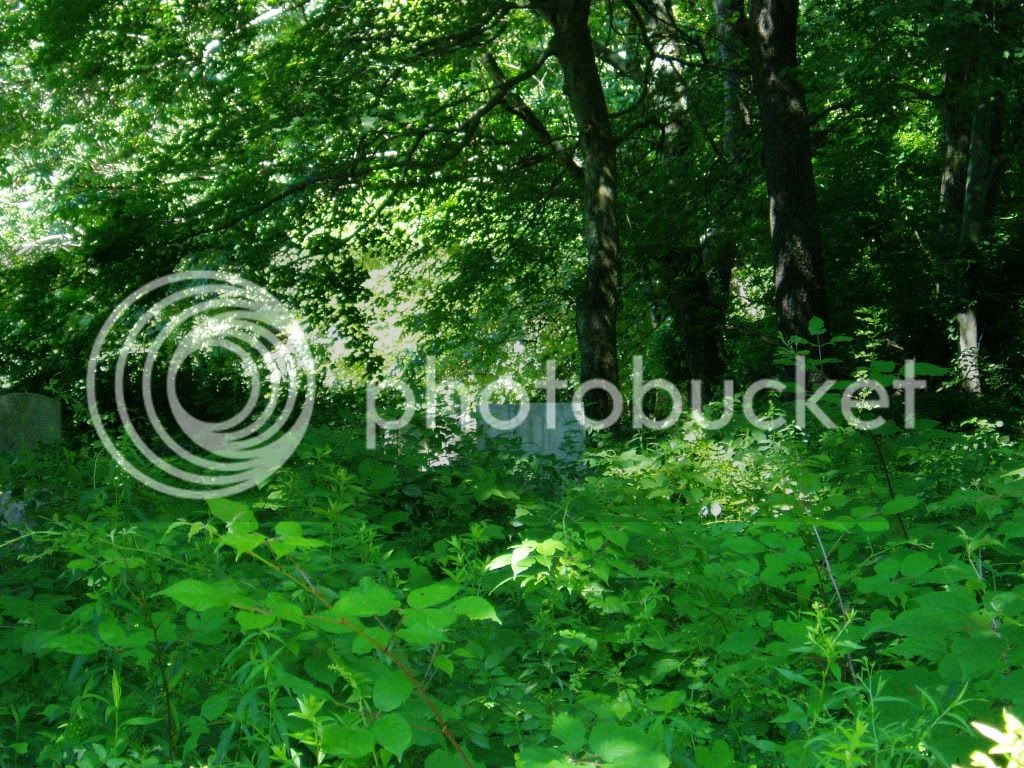 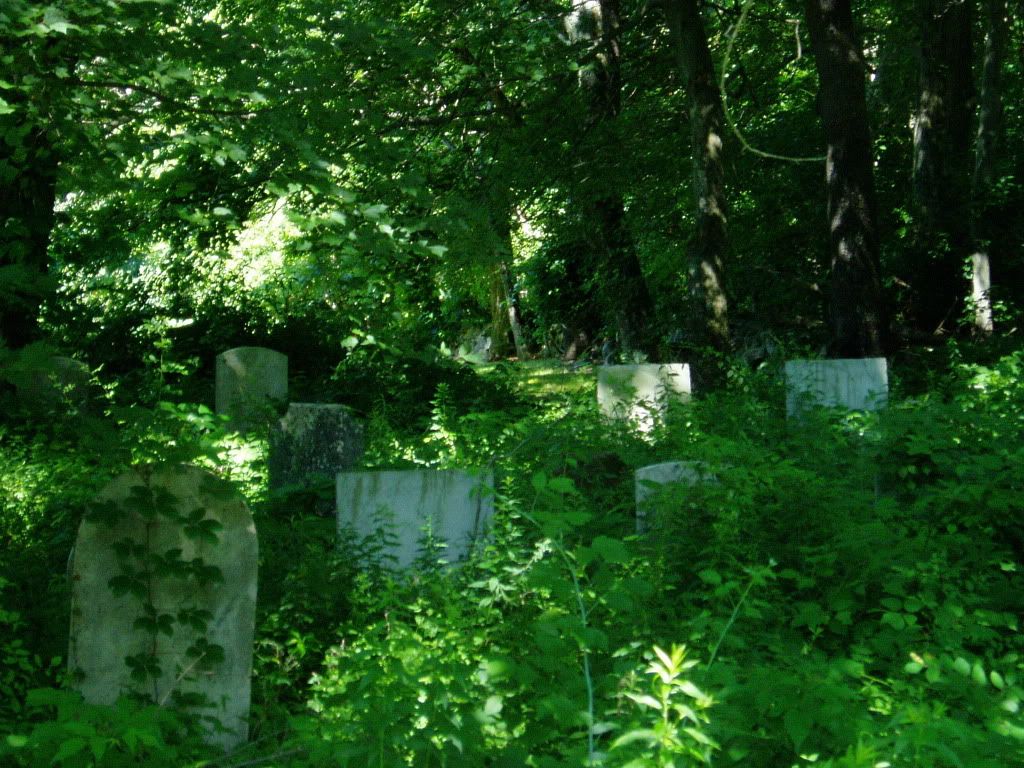 Kinda neat! I continued on to the old motorcycle shop that has been closed for some time now. Micheal Swyder's Motorcycles.I stopped in about 10 years ago when he was still open. They closed shortly after that. There is still a bunch of Norton's and a coulple Guzzi's inside. 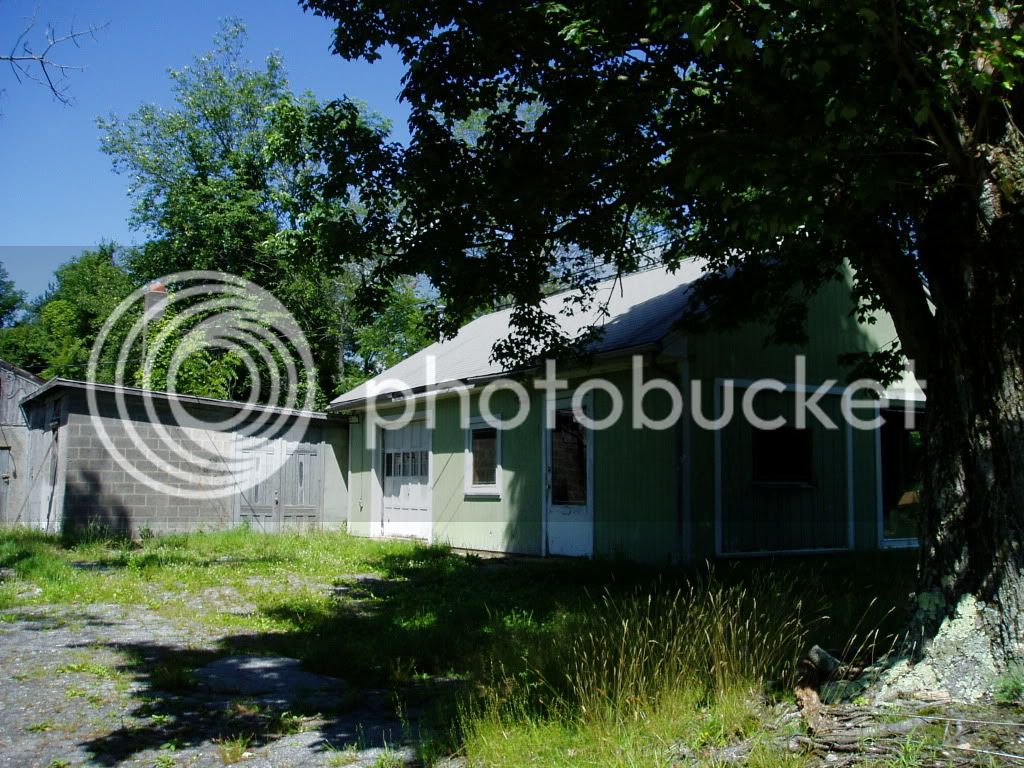 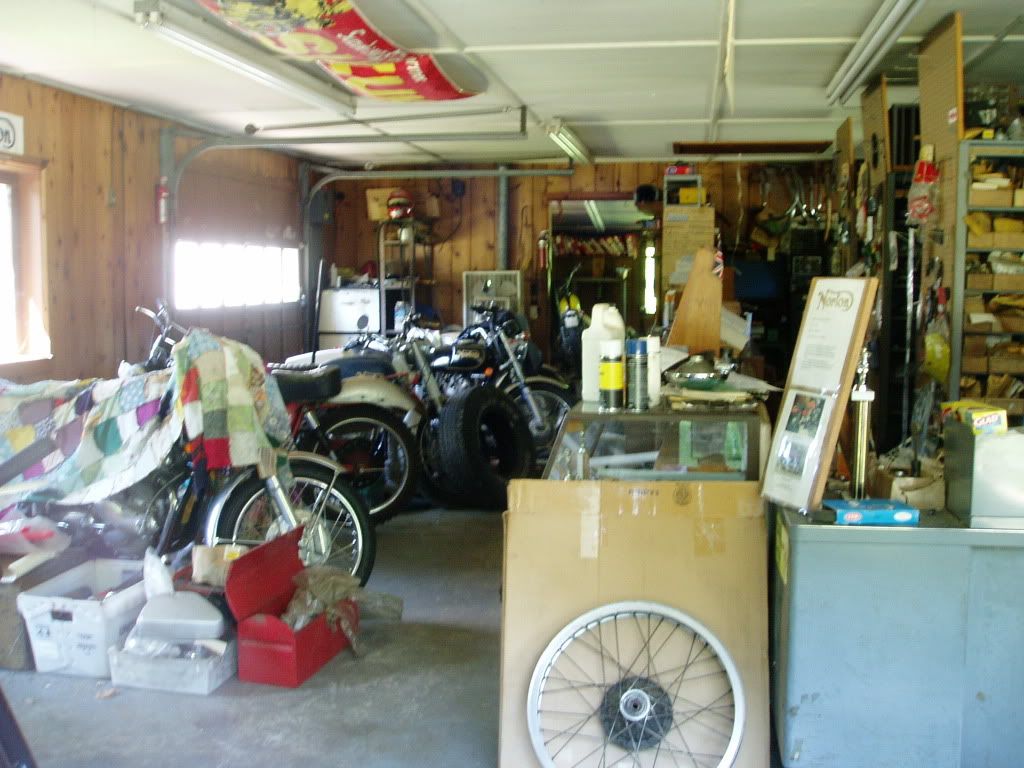 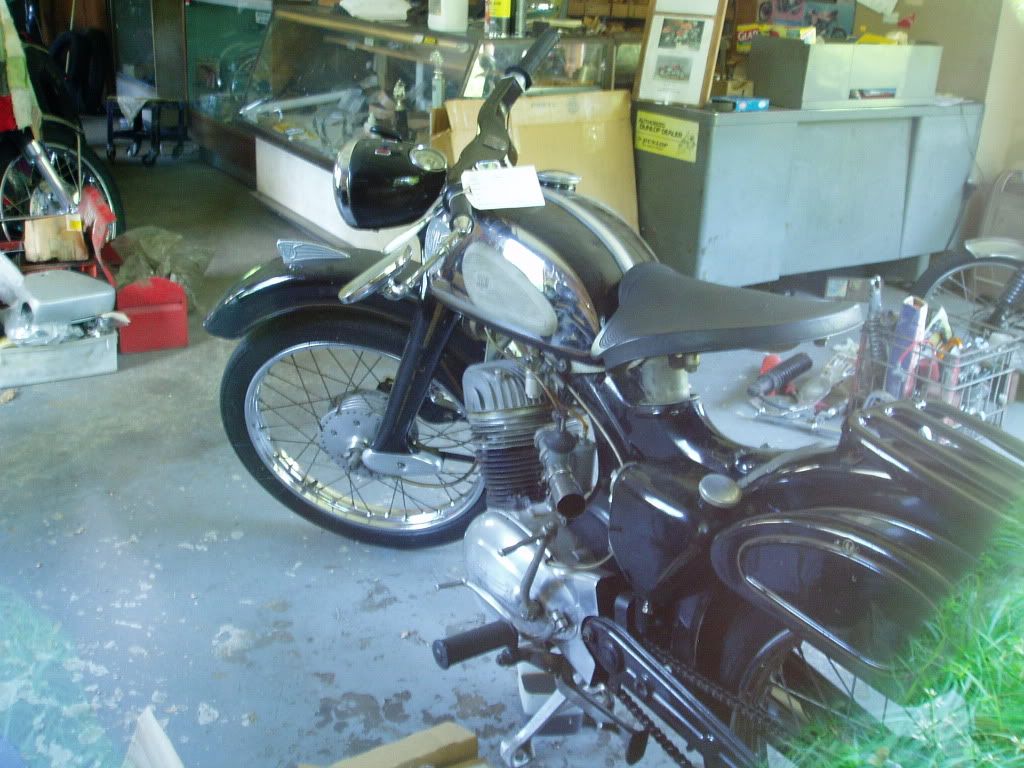 About a month ago I was out on my Harley when I Pulled over to glance inside the glass. Bikes were still there. I rode down the road next to the shop when I saw this older gent at his roadside mail box. Box said Swyder on it. So I asked if he knew anything about the shop down the road. "Oh yeah, that's mine." We talked for 20 minutes and he tell's me "We still have a couple bikes down there but nothing good." I'm thinking 'HUH?' He says "All the good stuff is in the barn." I told him about the English bicycle's I have and he say's I should stop back and show him. So I did today. 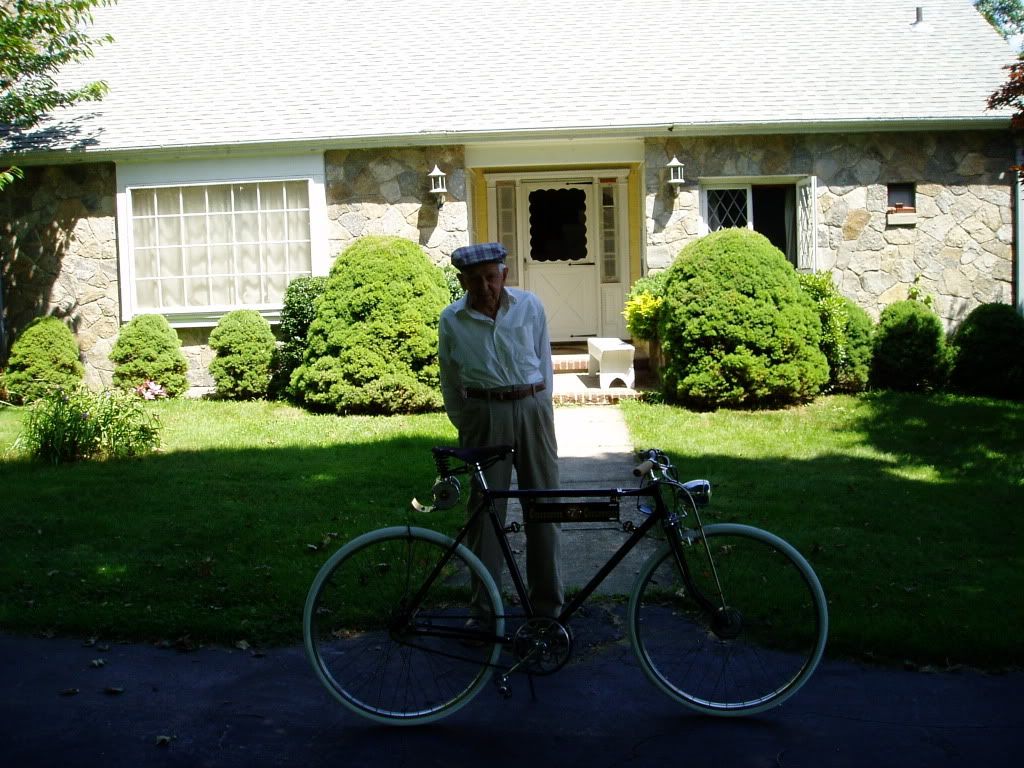 We talked for about a half hour today. See that house? He designed and built it himself. Did the stonework also. Turns out not only did he race and repair motorcyles, he was a stone mason, a tree climber and a mushroom farmer! Now he just repairs violins. A true Renaissance man. He looked familiar then I recalled he used to sit behind us at church. He said he sang in the choir for years but doesn't anymore due to health reasons. I was honored when he said "That is a beautiful bicycle." Todays ride ended upto be about 15 miles. A very nice day.
Dumpster divin' since 2nd grade.


sensor said:
now why would you tease that poor dog?!?!?
Click to expand...

Poor dog? The bird wasn't so lucky either!

Deorman- The majority of the times he goes on point, he just crouches down. Only occasionally does he lift his leg. But as long as that bird doesn't move, neither does he.
Dumpster divin' since 2nd grade.

sensor said:
now why would you tease that poor dog?!?!?
Click to expand...

as long as that bird doesn't move, neither does he.
Click to expand...

That's all that matters. :wink:
it's all about the bikes, man. http://www.ratrodbikes.com/forum/index.php?threads/deormans-gallery.104059/
I was going to update my sig line, but I'm not seein' anything worth plagiarizing right now.

I've been riding the wheels off this thing when the weather permits. Took a 6 mile ride Monday and a 13 mile ride Tuesday. British bikes are great and if you've never rode one you really should try one.
Dumpster divin' since 2nd grade.

ej599 said:
I've been riding the wheels off this thing when the weather permits. Took a 6 mile ride Monday and a 13 mile ride Tuesday. British bikes are great and if you've never rode one you really should try one.
Click to expand...

Very cool to see all of those nice photos and hear that story about the motorcycle shop.

Yall must have quite a bit cooler weather than what we have at the moment...triple digits here again today.
Rollin' with the Lord / Galatians 2:20

Steve I don't think we broke 90 yet this summer here in CT. They said maybe this week, but it's not going to happen.

Sorry to hear about your Texas heatwave Steve.We did have a pretty snowy winter and a very rainy spring out here this year though if that helps! That's why I'm gonna' get all the riding in that I can, while I can. Riding outside sure beats going to the gym.

Thanks for all the votes so far everyone, never expected this! Especially with the competition. Great bikes guys. Good luck to all! Cheerio!
Dumpster divin' since 2nd grade.

After work I took a cool 8 mile ride. It starts out with 5 miles of straight gradual hillclimbing up to Mt. Parnussus in East Haddam. Then a rapid 3 mile decent down Mt. Parnussus Rd. That was one fast trip down. May wear a helmet next time! 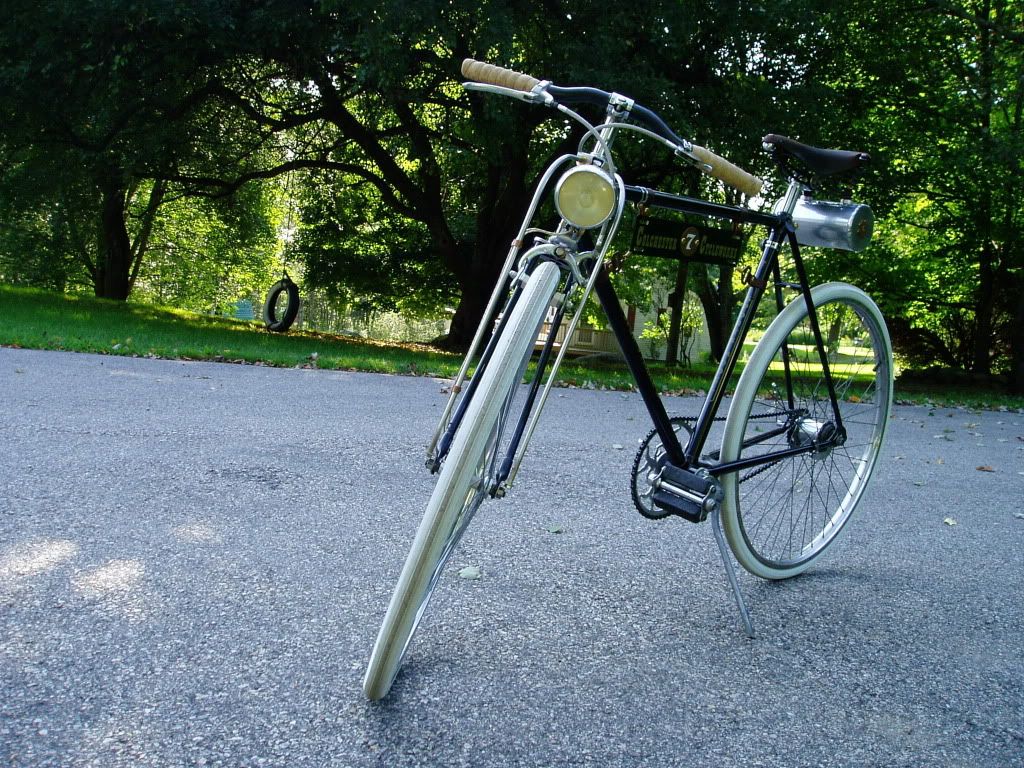 Got about 50 miles on it so far.Time to wash them tires!
Dumpster divin' since 2nd grade.

dang and setup all drop bar still i am impressed :mrgreen:
PRESIDENT of The Hooligans B.C. c.c OF SACRAMENTO
N*H*F*F* 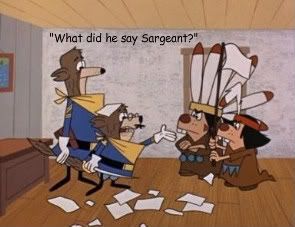 *sighs* when u got this done at first it had the bars up right and then u fliped them and i know you are not a huge fan of bars like that.
PRESIDENT of The Hooligans B.C. c.c OF SACRAMENTO
N*H*F*F*

That's what I thought you said! Heh heh-just bustin man! :lol: No, I like the looks of flipped bars but I smacked my knee good on a set I flipped years ago climbing a hill. Crashed and everything. The bars on S.L.O.B. were always flipped (check out the early pics) but their shape means there will be no knee smackin'.
There is not too many places to ride in my town and avoid the hills so I guess it all boils down to the fact that I'm jealous of you guys with flat terrain. Unless I'm on the Railtrail, I spend as much time standing on the pedals as I do sitting down. I may throw a set on my R.R.B.B.O.5 bike just to overcome my 'trauma'!
Dumpster divin' since 2nd grade.

That's why I like ape hangers, I can stand up straight when going up hills (I need all the help I can get). This way here I can get ALL 255lbs. of pressure on the pedals. :roll:
"OLD PEOPLE NEVER MAKE MISTAKES"...We just spend the rest of our lives paying for the ones we've made when we were younger...<(((><

Yeah, I guess it all depends on the bikes purpose. Around here there aren't many shows so there ain't much sense in building a 'show bike'. That's why most of my are built are built to ride.
Speaking of which, I had S.L.O.B. out about 15 miles yesterday. 9 on the Airline Trail and a little over 5 to get there and back. There were some young kids on the trail with a lemonade stand who liked the bike when I stopped for a cup. They thought the seat springs and tool box were good ideas! But now the bike is splattered with trail mud and that S.L.O.B. needs a bath.
Dumpster divin' since 2nd grade.
Share:
Facebook Twitter Reddit Pinterest Tumblr WhatsApp Email Share Link