Guitar Players: Show us yours!

So what do you play? What's in your rig?
How long have you been playing?
Whats your favorite style of music to play? 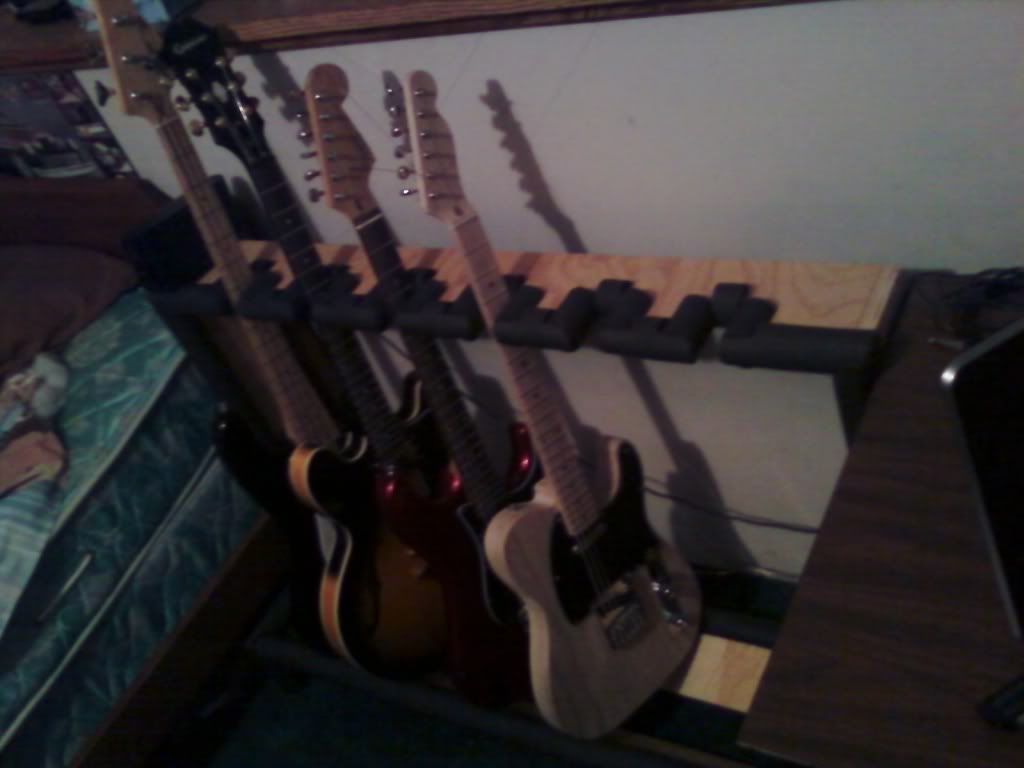 since I've added a 1951 Harmony Sovereign acoustic, and am in the process of finishing the tele and just re did the harware, pickups and electronics on the Epiphone.

EDIT: also, not in the first pic is probably the most fitting guitar for the theme of this website: a 1969 Tiesco E-110 that pretty much came from the trash, got smashed, and given to me. Its a little ratty. Now I use it as a slide guitar because the frets are all pretty worn out. 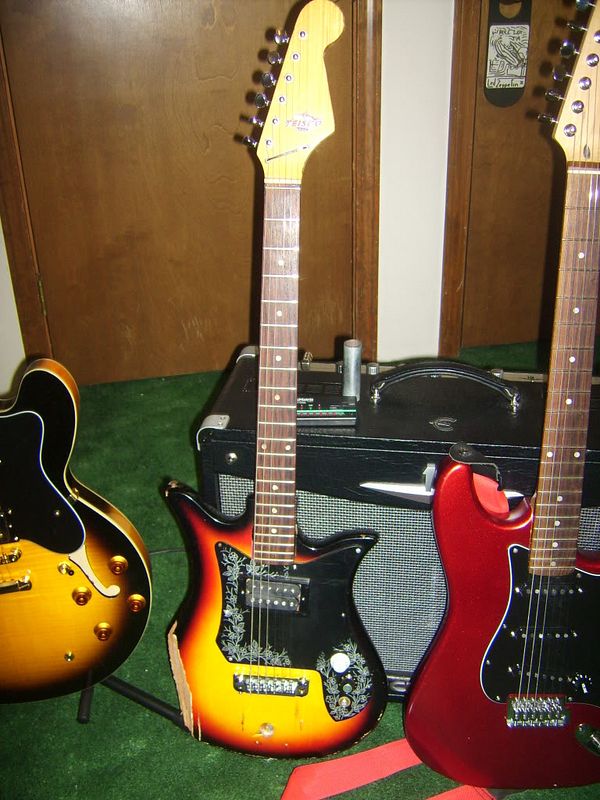 My amp is a Crate V18 Class A tube amp that is too loud for a bedroom rocker like myself.

I have been playing just under 3 years, and I enjoy playing any sort of rock, and also I enjoy the blues style. 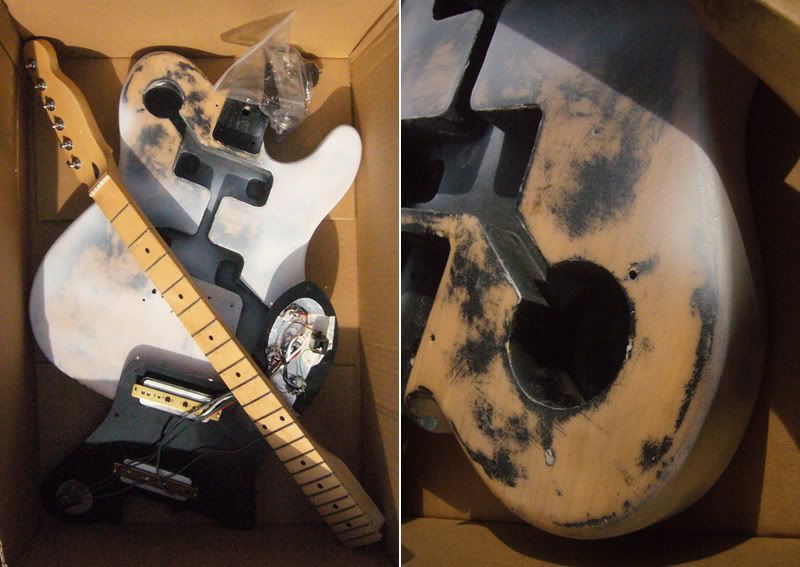 I'm in the process of building one. Or should I say heavilly modifying...
I was planning to buy a new Squier Tele Vintage Modified Custom II (phew!) but suddenly came across an add on a Dutch auctionsite: That same guitar of my choice ...in a box ...in parts ...and trashed... But, that's good enough for me. 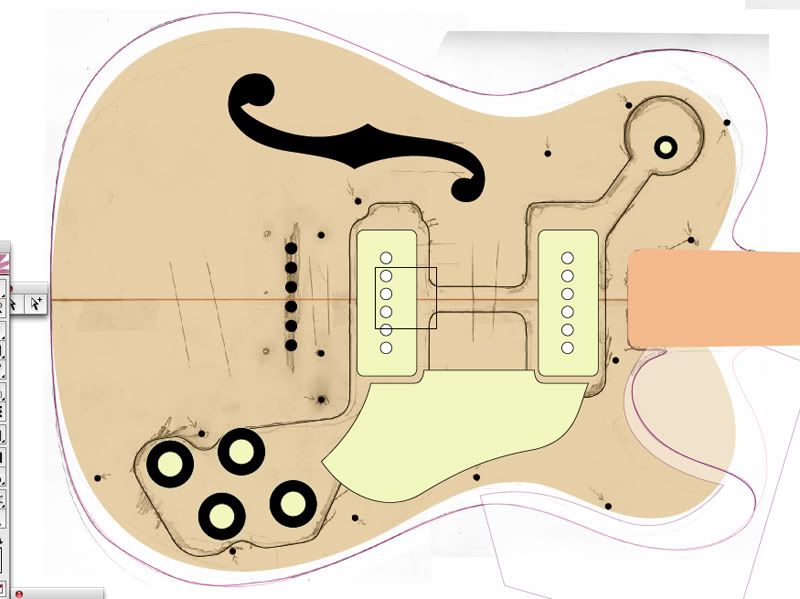 ^ I wanted to build the ultimate rockabilly-guitar. On a budget. For that I want to use as many aspects of guitars that the rockabilly-pioneers were using: P90 pick-ups, bigsby, one cut-away, semi-hollow, etc. That means hints of gibson, fender, and gretsch. And I wanted to cut it out of an existing tele-body. 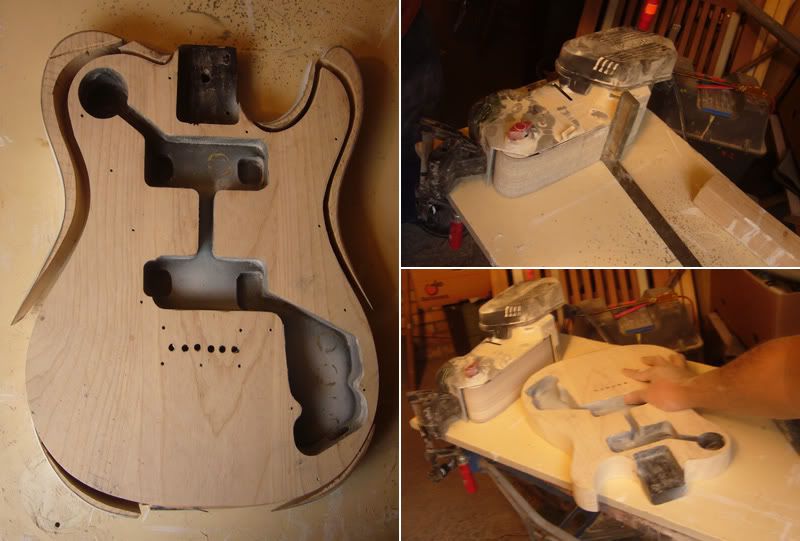 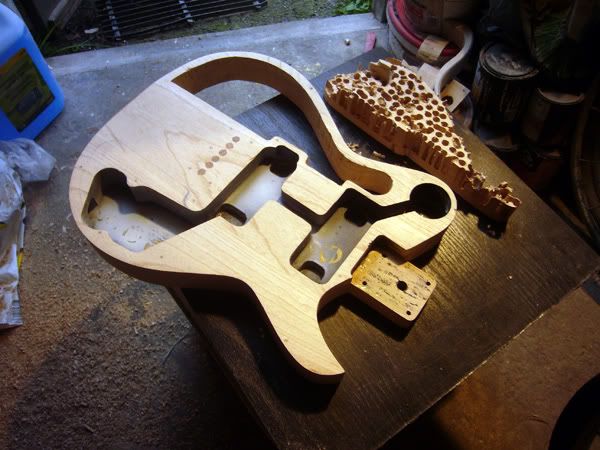 I see it more as an artproject than anything else really. That means: If it plays well and sounds great it would be awesome, but if it sounds and plays okay-ish, that'll be fine too. 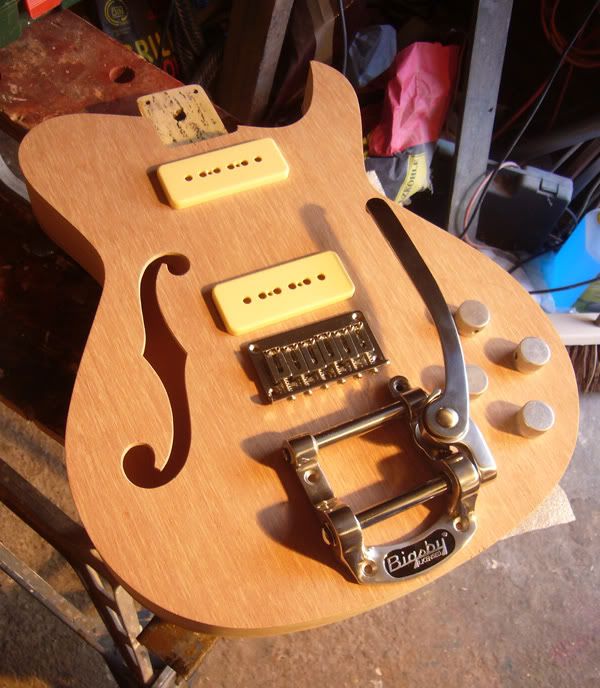 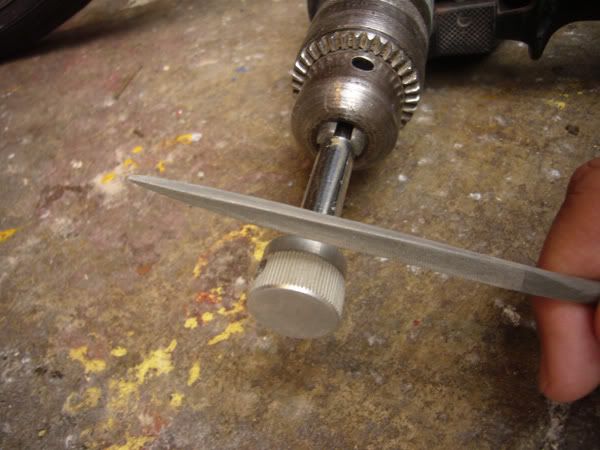 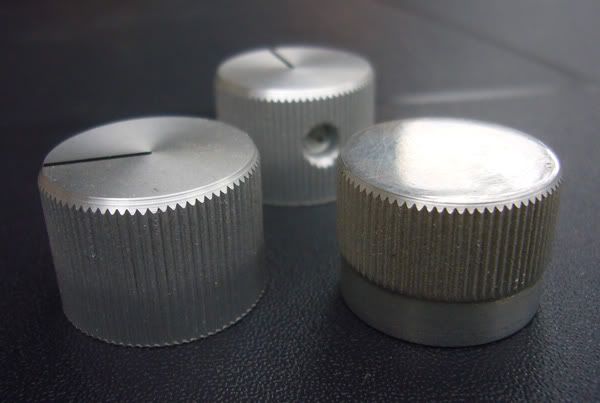 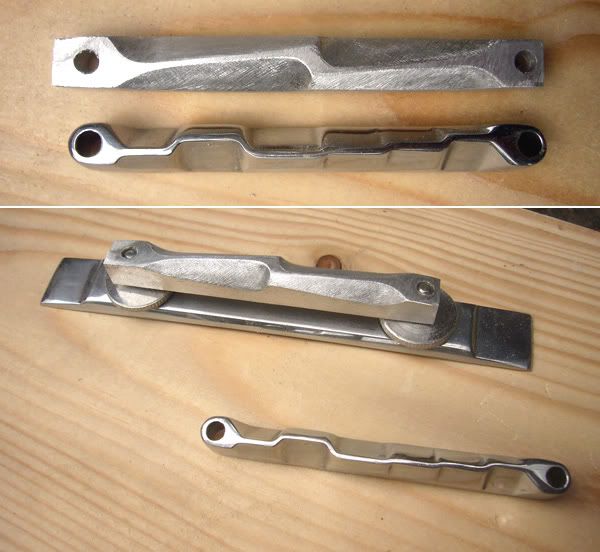 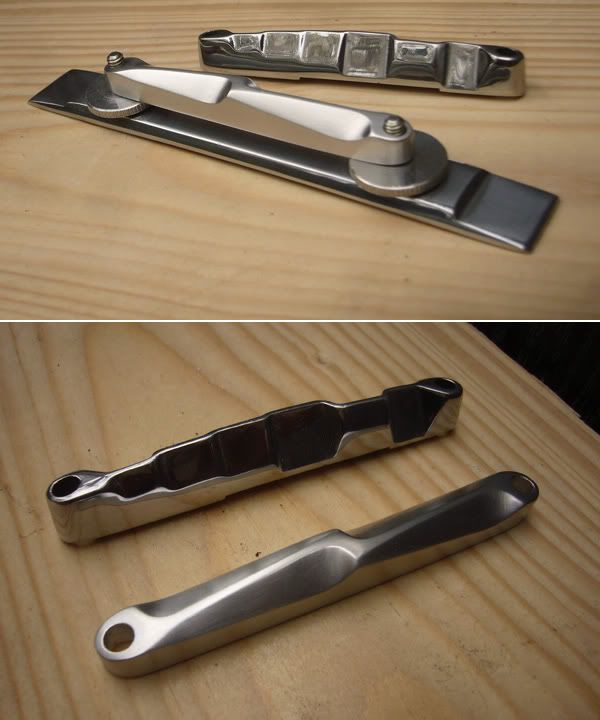 I did lot's of stuff to it: designed and cut out my own shape, filled the holes, drilled new ones to re-center the neck, partly hollowed it out, made a back and top with an f-hole cut-out, restyled aluminum 'radio'-knobs, homemade compensated bridge carved out of an aluminum bar, etc...

^ This is were it's at (and has been for several months now because of lack of time...)

Click here for a lot more detailed pics at the Telecasterforum! 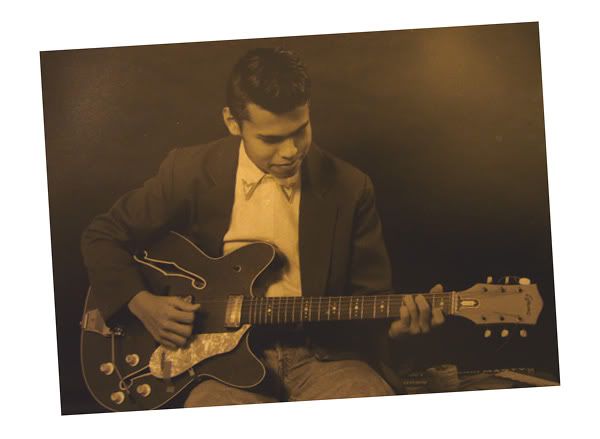 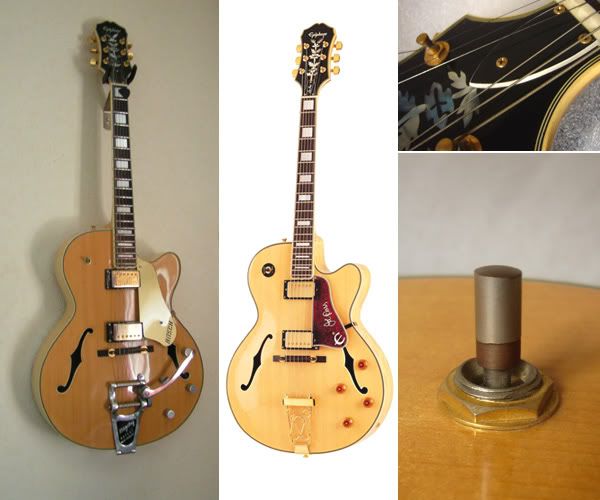 ^ Epiphone Emperor II. Modified by me to make it more look like a Gretsch. 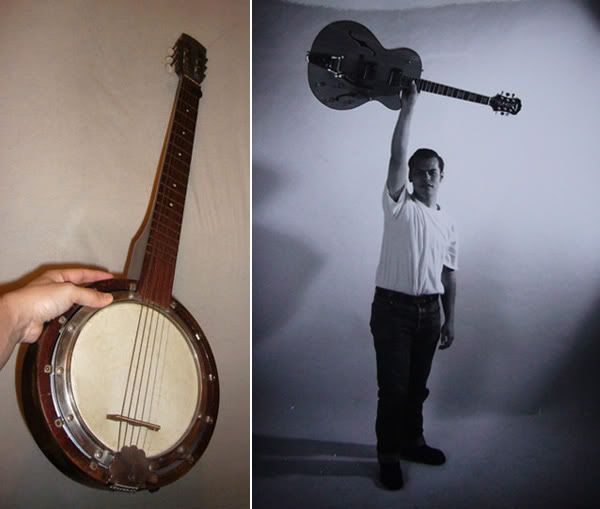 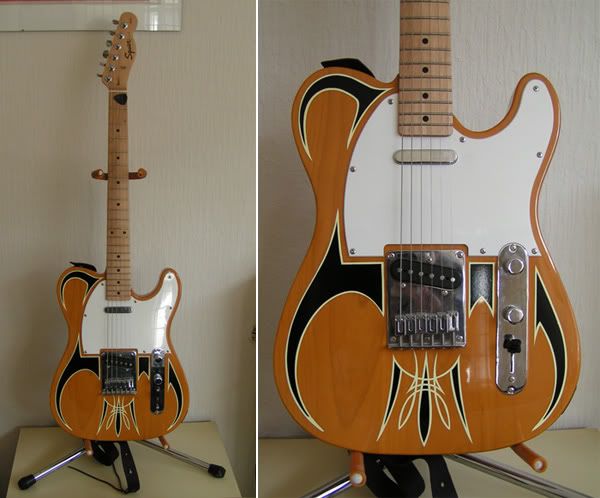 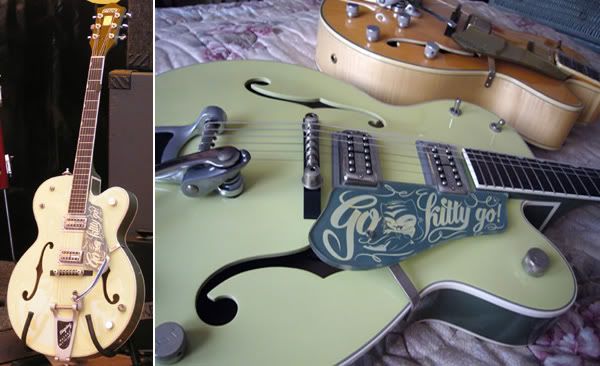 ^ Gretsch Anniversary. Added a Bigsby and homemade pickguard. Sold it to my brother... 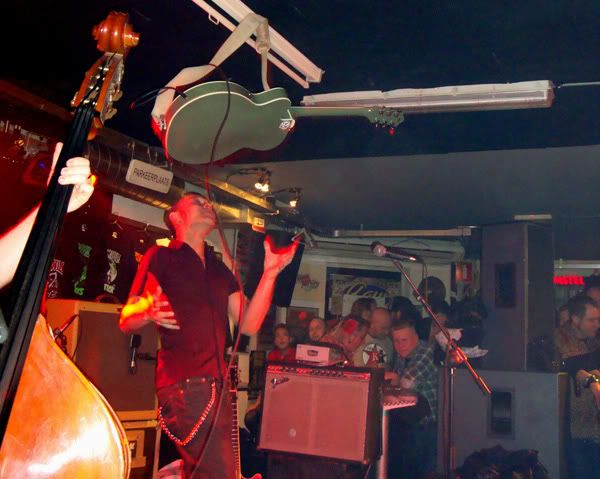 So what do you play? What's in your rig?
How long have you been playing?
Whats your favorite style of music to play?

I have an Marshall solid state, a Rath-amp, and a much used Danelectro bedroom mini-amp.

I guess I was born loving rockabilly-music. I've been a noviceplayer all my life and I don't expect to hear or see any improvement anytime soon... I've played in a rockabillyband 'Two Lane Blacktop' for a few years, and we won the talentcontest at the Hemsby Rock'n'roll weekender in 2000. It couldn't be from my guitarplaying because my borrowed semi-acoustic 'Whatever' was not plugged in... I guess there were a lot of Dutchies cheering for us at the venue ;-)
my RRBBO #6 SINGLESPEED HOTROD

One of the last things I expected was for someone to recognize my multi guitar stand, but you are right on the money with that.

the tele looks awesome and I love that bridge! you've got some sweet axes in your fleet too

Rating - 100%
6   0   0
ive only got one guitar(since four strings is my preference)....an early 80s ventura lawsuit model of a gibson es 335
but ive got a rickenbacker 4003(98 in fireglow)
squire p bass(yeah theyre junk but when my son wants to play i dont have to worry about it :lol: )
and an ibanez edb 400(again not a great bass but its got a really good tone for what it is)
was playing through a sovetek bassov bluesboy head and an ampeg svt-610hlf cab but had to sell those when i was laid off for a while(still crying about the head since ill probably never find another

) now im stuck with just my practice amp(hartke ha2500)...
ive been playing off and on for about 15 years
and yeah i know this post is worthless w/o pics but i lost all my files/pics when the computer crashed...but ill drag everything out and get some new ones this weekend
"WAKE UP AND LOSE"

Rating - 0%
0   0   0
Cool, sensor. I like the squire p-bass for just foolin' around on. It wasn't actually mine, but I pretty much inherited it from just having it for so long so it just gets passed around my friends to whoever needs it.

Pics are always good but don't hurt yourself getting everything out.

Theres a guy at my church in the praise band I play with who's got a 70's (?) vintage rickenbaker bass that he bought new when he was a teenager. Its absolutely MINT condition and it sounds like nothing else. Even has stereo output

dont mind the guest room......i already know it needs cleaned
still trolling for a 3/4 upright thats of descent make...
"WAKE UP AND LOSE" 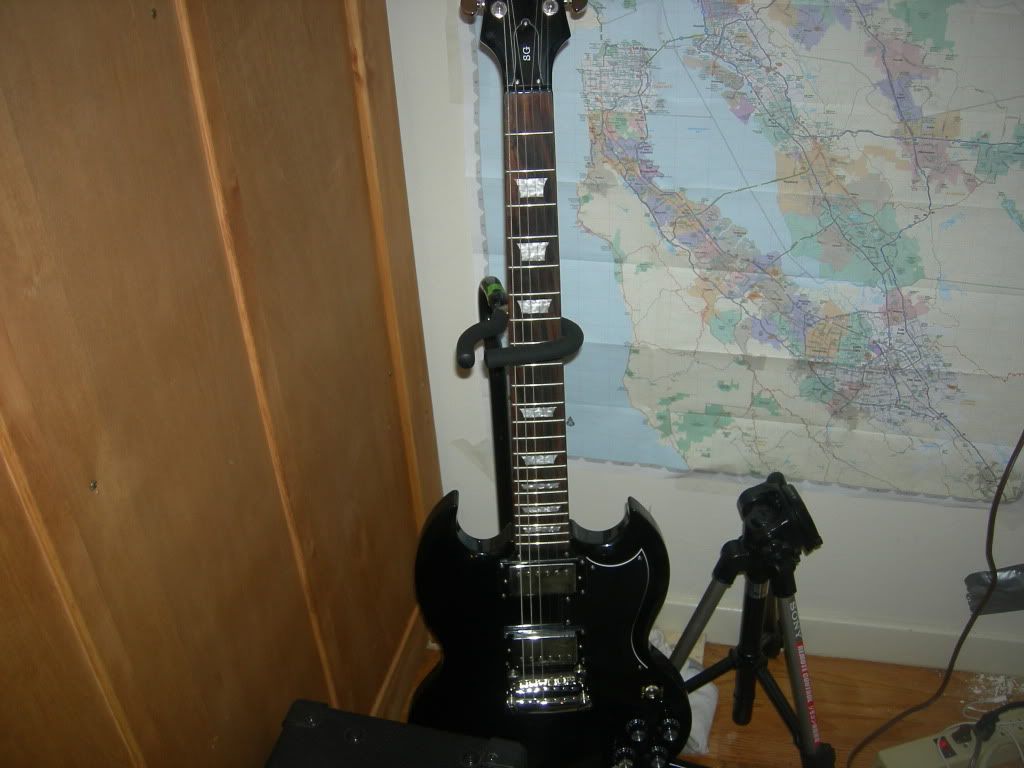 I just got the thing figured out too. swapped out the pickups and electronics and completely rewired it. I finally got rid of the buzz I was having. My grounds kept coming loose as I was feeding the electronics one by one thru the F-holes. WHAT A PAIN IN THE BUTT. but It's all good now and It feels good not having to have to deal with that again. I also swapped all the hardware out from nasty cheap gold, to nice, cool chrome. I gotta get some final pics of it. I just need to de-gold a couple screws and it will be finished!

Sorry, I have no pictures at the moment, but I too am bordering on guitar poor.

I played in church for many years, and needed the pickups to patch into the church's PA System.

Rock cover bands forever, tho not for a few years now. It's in my blood. I'd form a new band if I found the right guitarist and drummer.
.
Jerry - DFWland, TX.
Go write it up Chum.......

Rating - 0%
0   0   0
bucket loads of guitars over the years but I guess the only ones worthy of mention were a Gibson Les Paul Standard, followed by a LP Studio, then several Epiphone LP's... '56 gold top, then a Strat then and now a Squier Strat.... seems to be a downward trend now i look at it !!!
Although my heart really belonged to my 7 piece sparkle black Tama Rockstar& Zildjians... sigh
Cruizados BC
J

Jerry, I've liked the squire '51's ever since I saw them, and I'd love to own one someday and mod it out!

I've been sorta half looking for a better amp lately, the lead guitarist of my praise band at church has a peavey classic 30 that I love the sound of. Really, all I need is a nice tube amp with a clean and a dirty channel, and I'll be good. I'm getting kinda sick of only one channel on my crate.

Rating - 0%
0   0   0
just got this turser dirt cheap,I prefer it over gibson which I have had several.been playing for 40 years,I play srv,journey,beatles,frampton,eagles,.played in a fender legen

ds and licks contest,did pride and joy.I use an old 40 watt randall.

gcbike said:
just got this turser dirt cheap,I prefer it over gibson which I have had several.been playing for 40 years,I play srv,journey,beatles,frampton,eagles,.played in a fender legen

ds and licks contest,did pride and joy.I use an old 40 watt randall.
Click to expand... 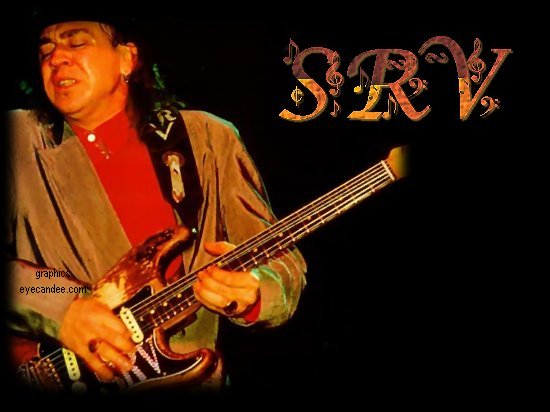 Rating - 0%
0   0   0
http://en.wikipedia.org/wiki/Jay_Turser mine is the jt220 sounds like a cross between a gibson and strat.has 60s slim neck.I had the jt200 serpent a month ago.before that I had a gibson les paul studio faded cherry,came complete with razor sharp fret work and never stayed in tune.this turser is flawless and completely set up the right way right out of the box.something gibson and epiphone seem to lack.the neck is set.
J

Rating - 0%
0   0   0
yup, I remember when I first saw jay turser guitars on ebay, but I never paid much attention to them because I had never heard of them before. most people underrate the lesser known companies. 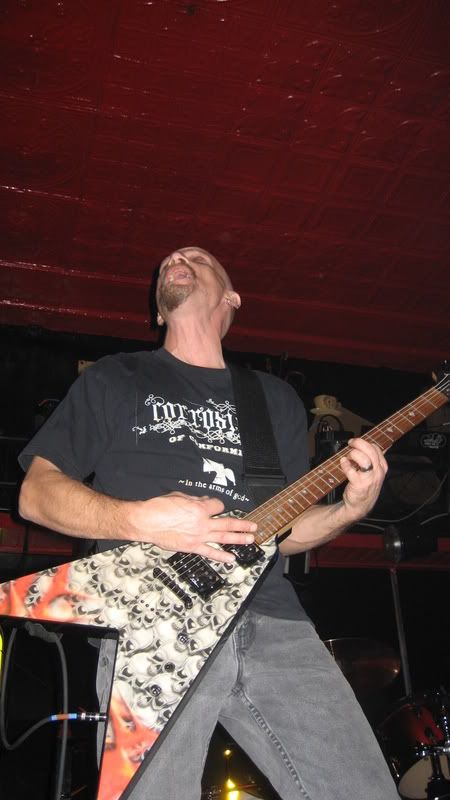 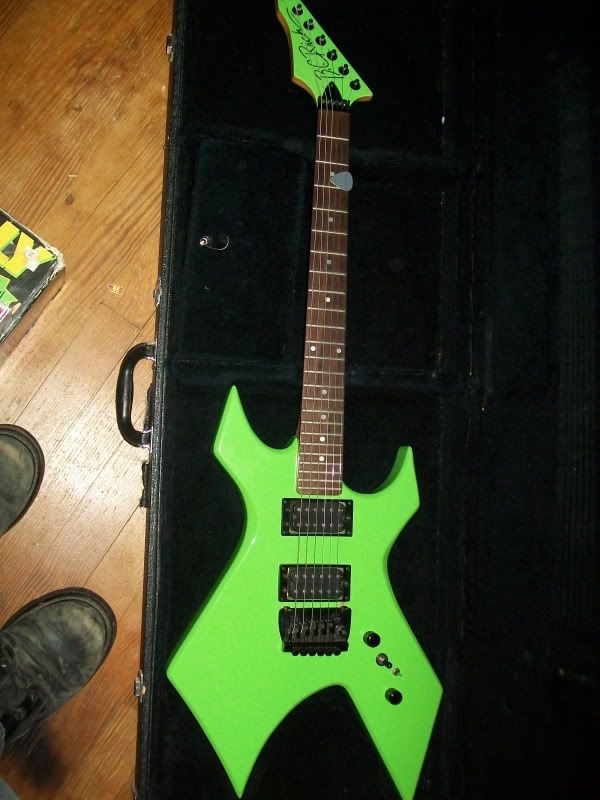 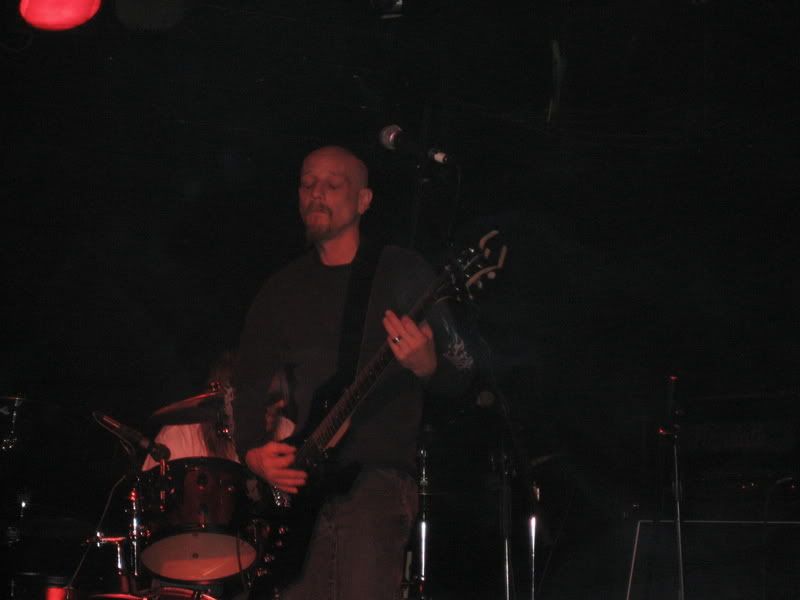 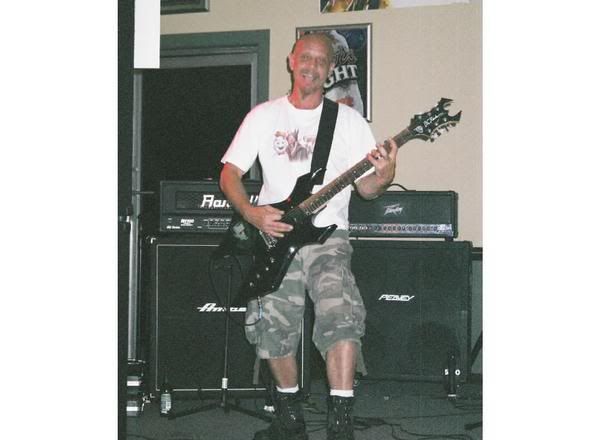 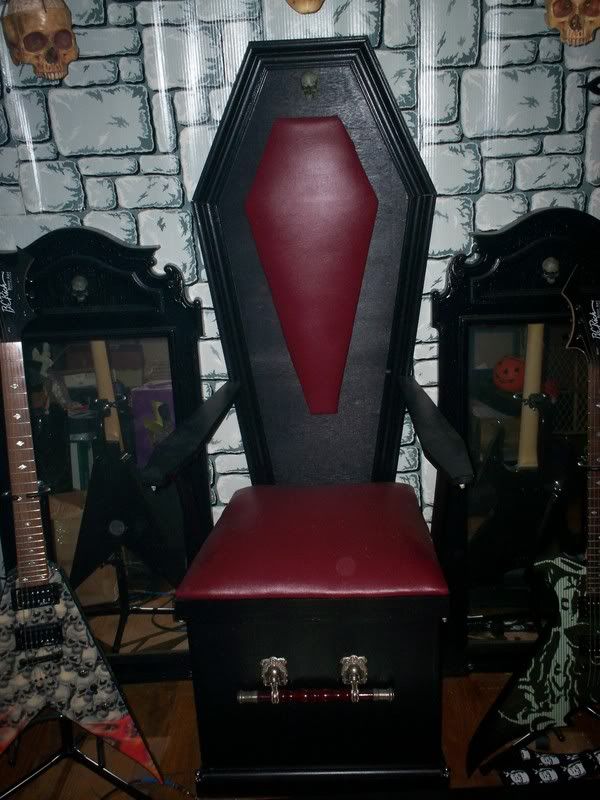 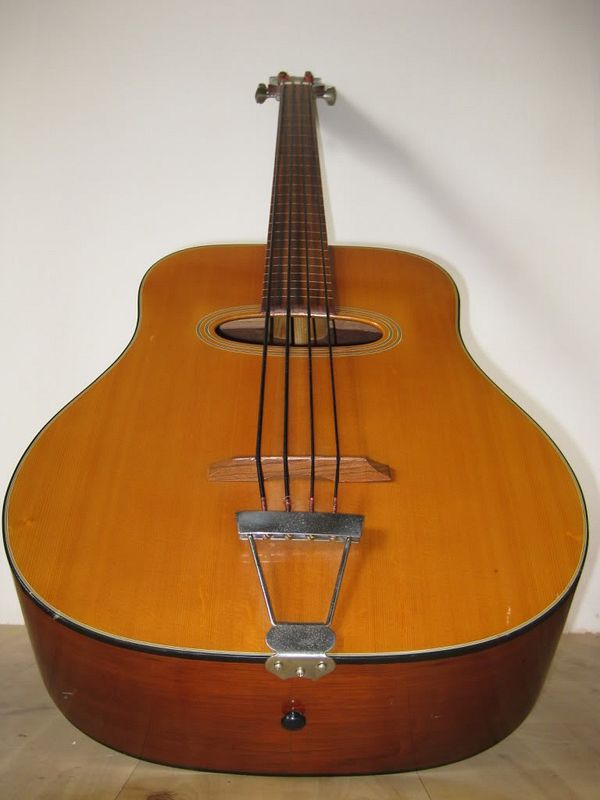 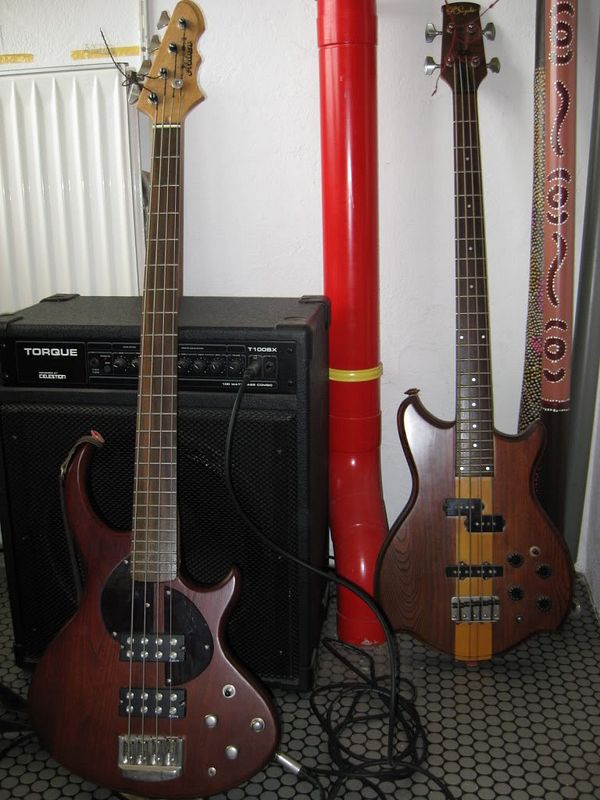 Here's me mid-90s playing in Egghead on my Washburn Force-abt active :lol: 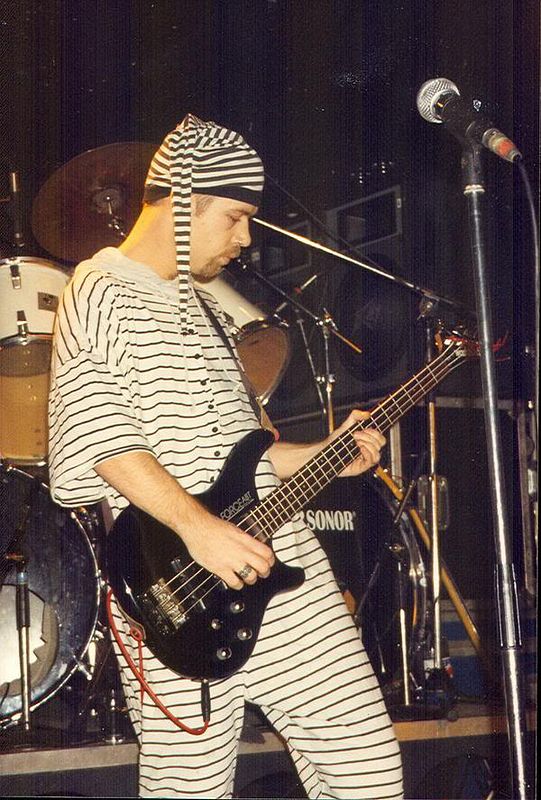 To give you an idea, here are some tunes we used to make when hardcore was still loud noize instead of housemusic :mrgreen:
http://www.tediousrecords.com/compass/music.htm
Have fun, but don't blame me... :roll:

Oh, and there is also this: 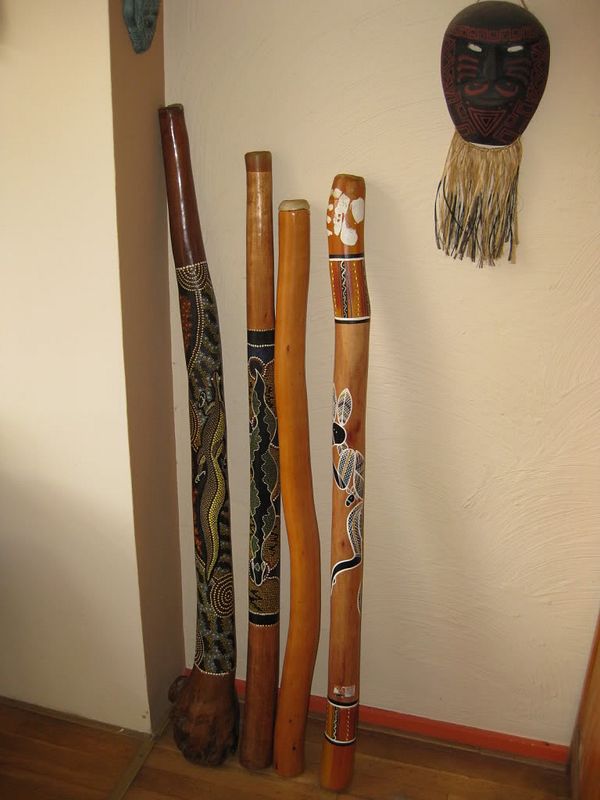