Disco ball is where it's at!!

I'm sure you all have those builds that come to a stall because you're waiting for a specific part. That part for me has been the seat. I've had a vision for this bike that includes a white seat. I don't have a white seat yet. I've been meaning to get some vinyl to re-wrap the original seat, but I'm not sure if my lack of motivation to due this stems from being busy, or just realizing that I probably won't use that seat. Anyway... I received my decals in the mail and was excited to put the chain guard decal on after dinner. That's when I realized the envelope that they came in was too short to fit the decal. WHAT!!??? I opened up the envelope to find it folded in half???? I was initially quite disappointed that my invoice show $10 freight and my short envelope had only 4 tiny stamps on it. I was robbed. Strangely though, the guy I use, included two of the chain guard decals instead of one. I wondered if this was to somehow compensate for the folded decals. Either way, I tried it on the guard and it worked out okay. I will however be providing specific instructions, not to bend on my next order.

I decided to get a couple twinshift cover decals made up while I was at it, but the woodgrain didn't work out that well in the print. It looks like some resolution was in the print. Oh well. I'm pretty happy with the way the chain guard decal turned out.

So, this evening, I decided to make some progress without my seat. I needed to figure out a fix for the unsightly hole in the rear fender. Even my donor bike had this same hole. It's from the sissy bar fender mount that unfortunately was missing on both bikes. I scrounged some random materials and Macguyvered a temporary solution. I may someday find a better fender.

In the process of lining up the sissy bar, I grabbed a seat I had laying around to help hold everything in position. When I got the seat on, I actually started liking the look and feel of it. The only thing that wasn't working for me was the colour of the seat. That's when I started researching vinyl spray paint. Rust-o-leum and Duplicolour make vinyl spray paint that seem to have some pretty good reviews on youtube. I'm going to give it a try after the holiday madness. I have some old seats and not much to lose. Anyone ever try this on a bike seat and care to share pics of the results?

So here are some pics of the progress. I basically have a pretty complete bike, other than pedals, some cable hook ups, some grips, and a final photo shoot. Over the last couple months I was able to complete some more work on my garage as you'll notice the background change a little. I was also able to upgrade the back tire to match the front. Went from knobby to gripper on the back. Both are Raleigh Red Dot tires and matching the front makes me much happier. 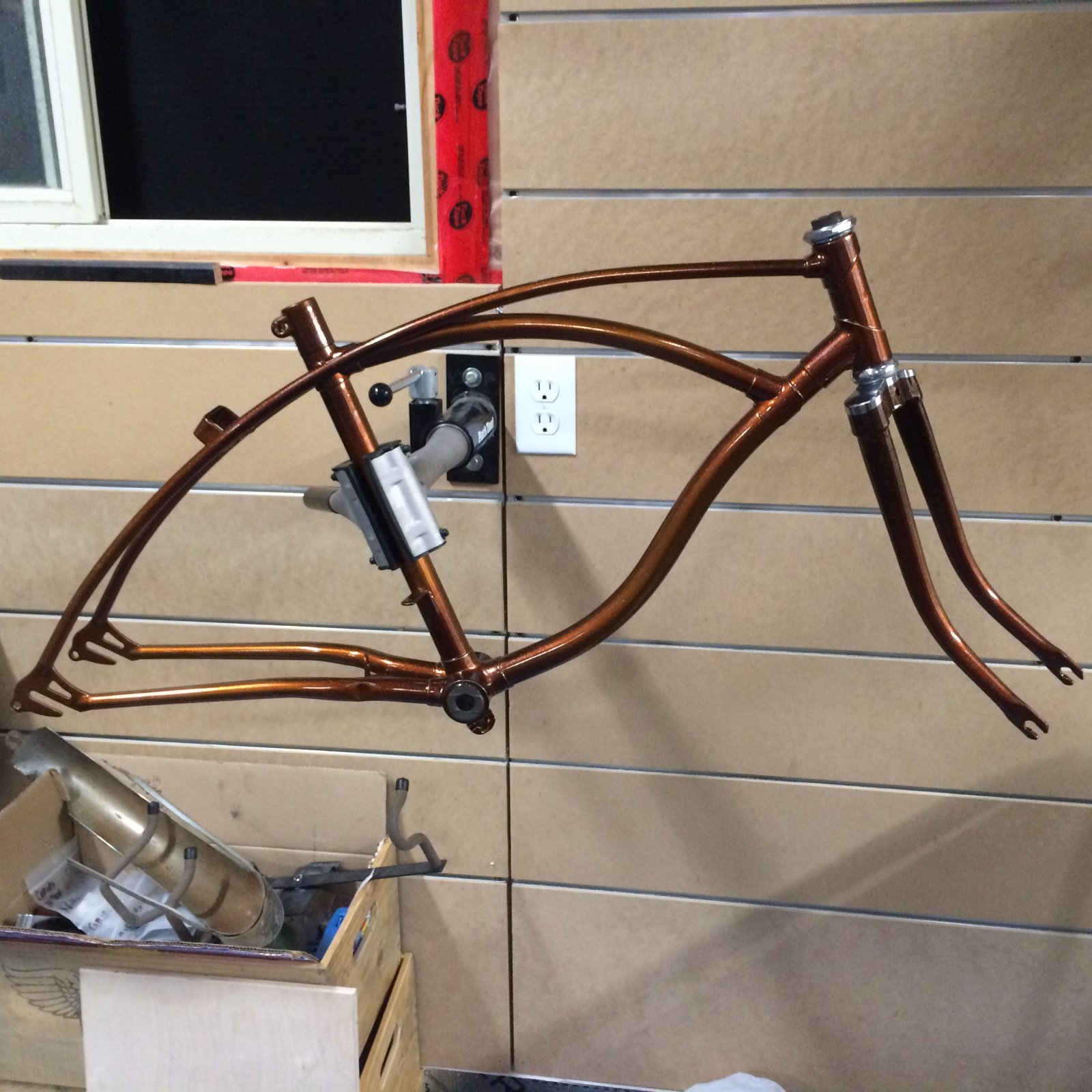 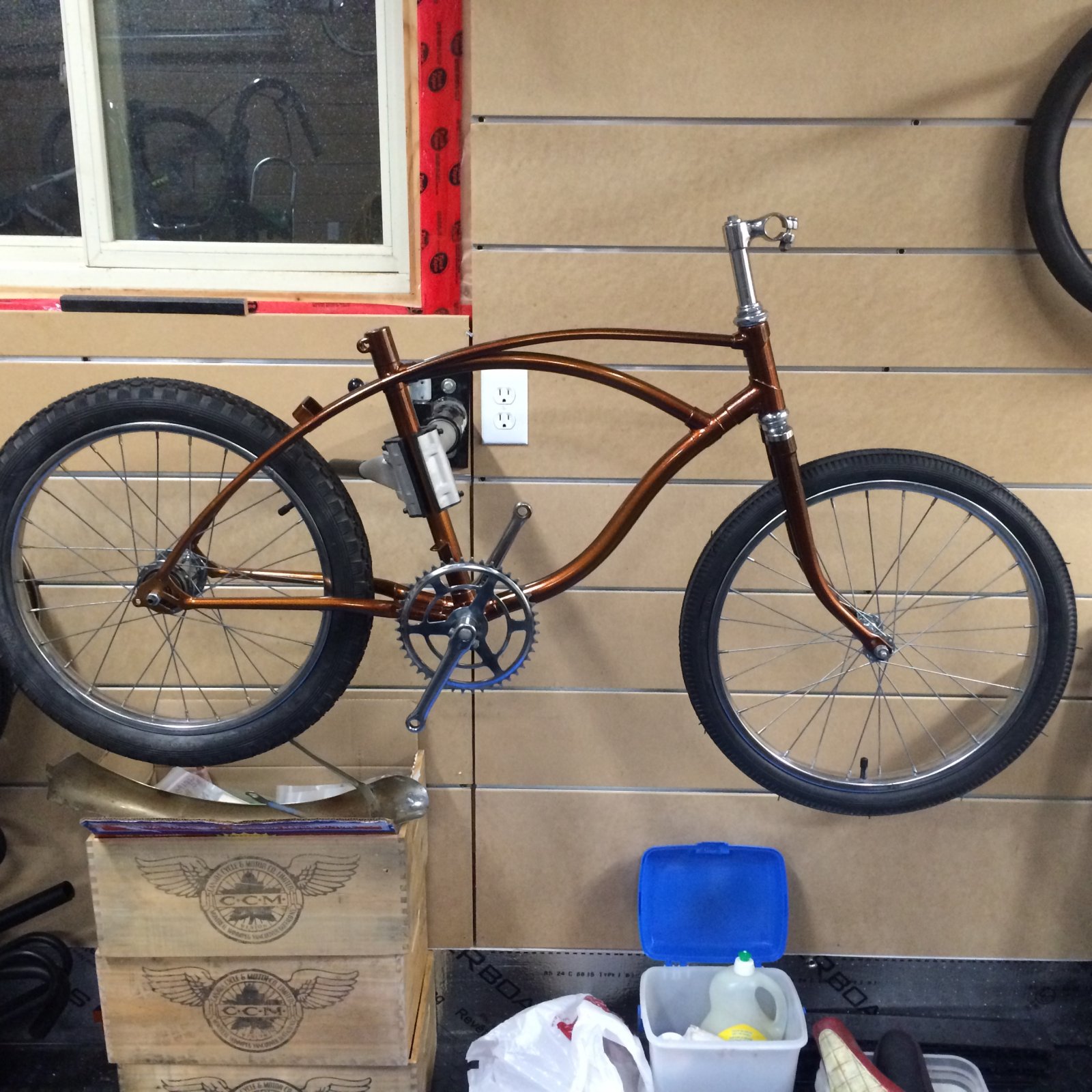 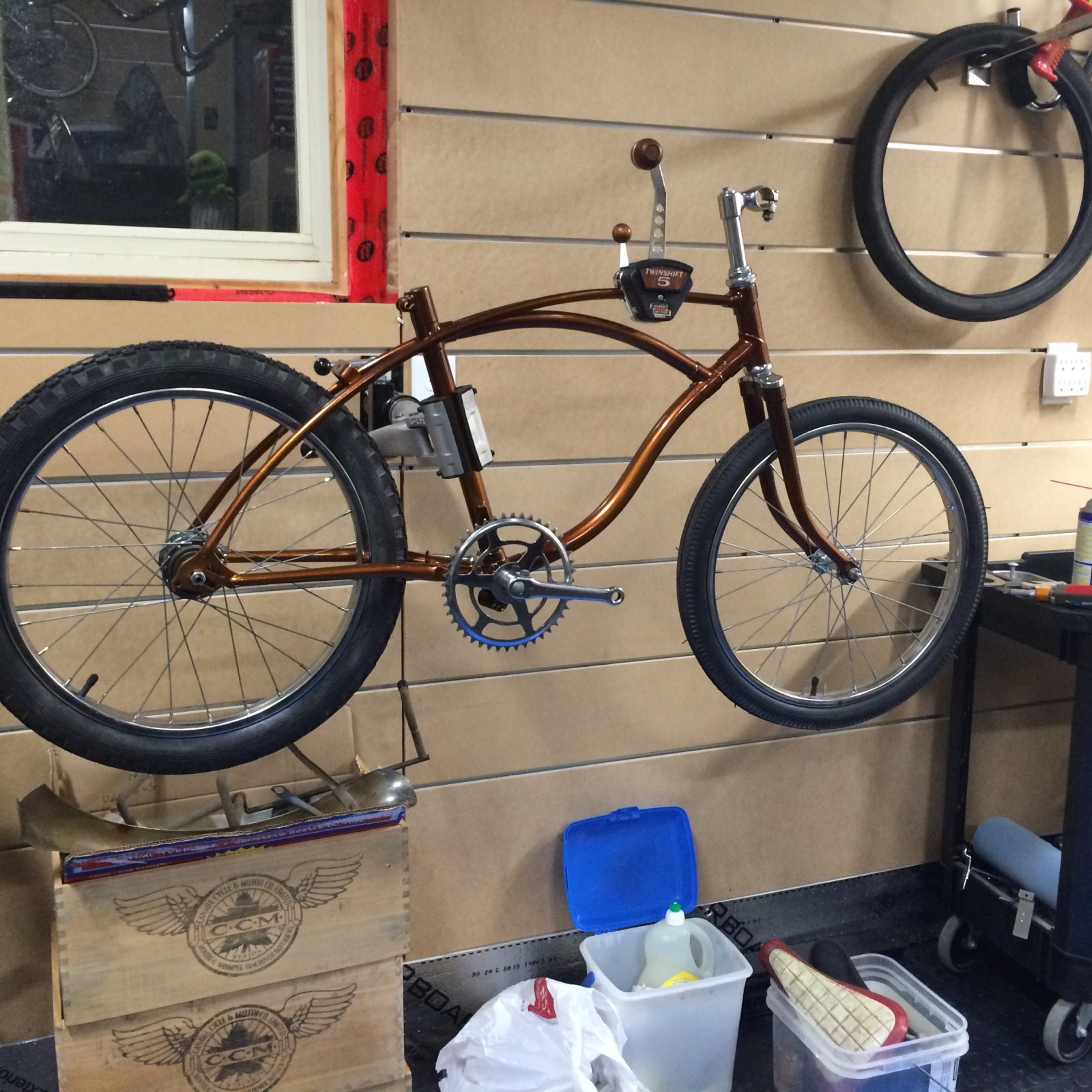 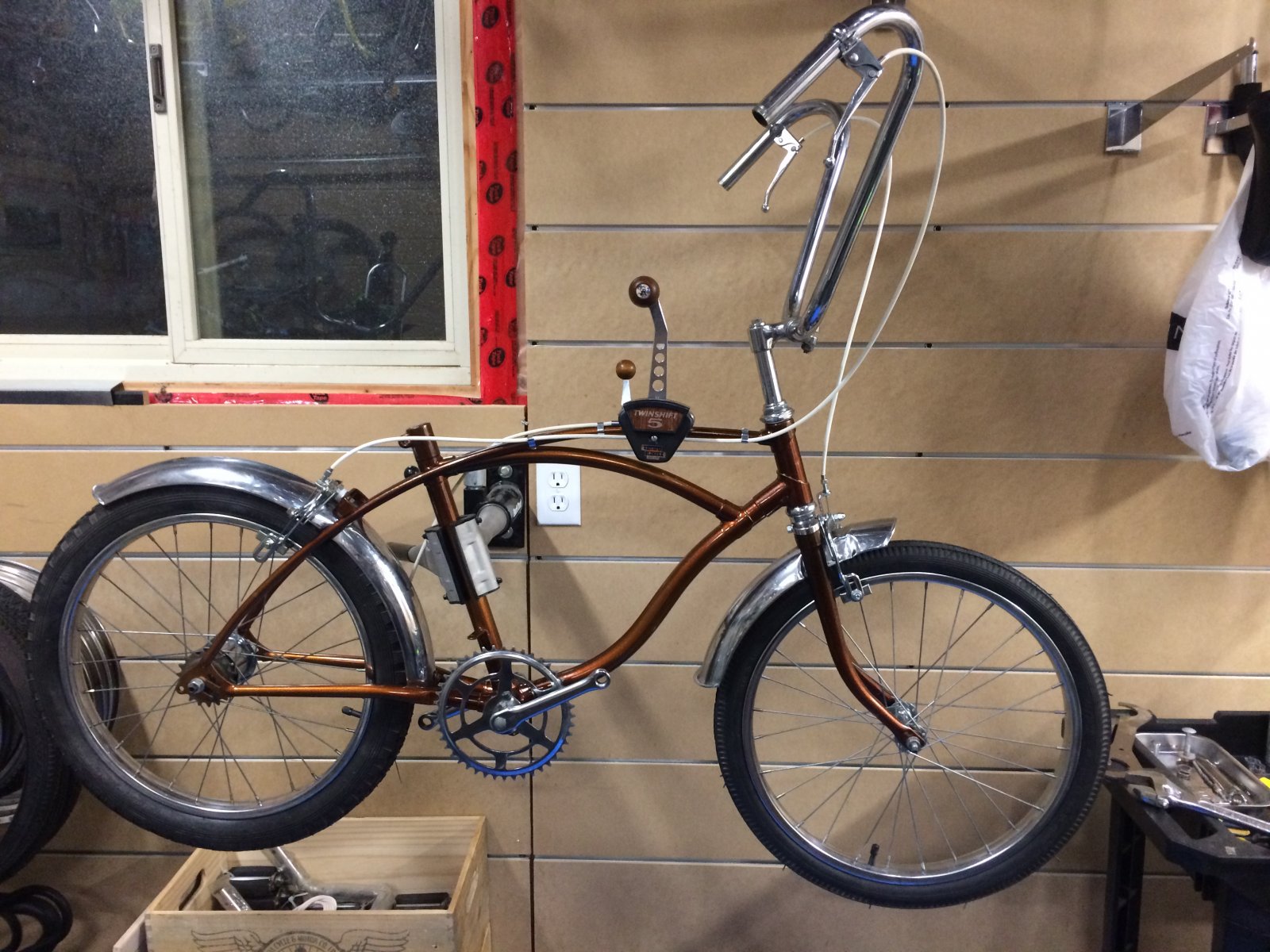 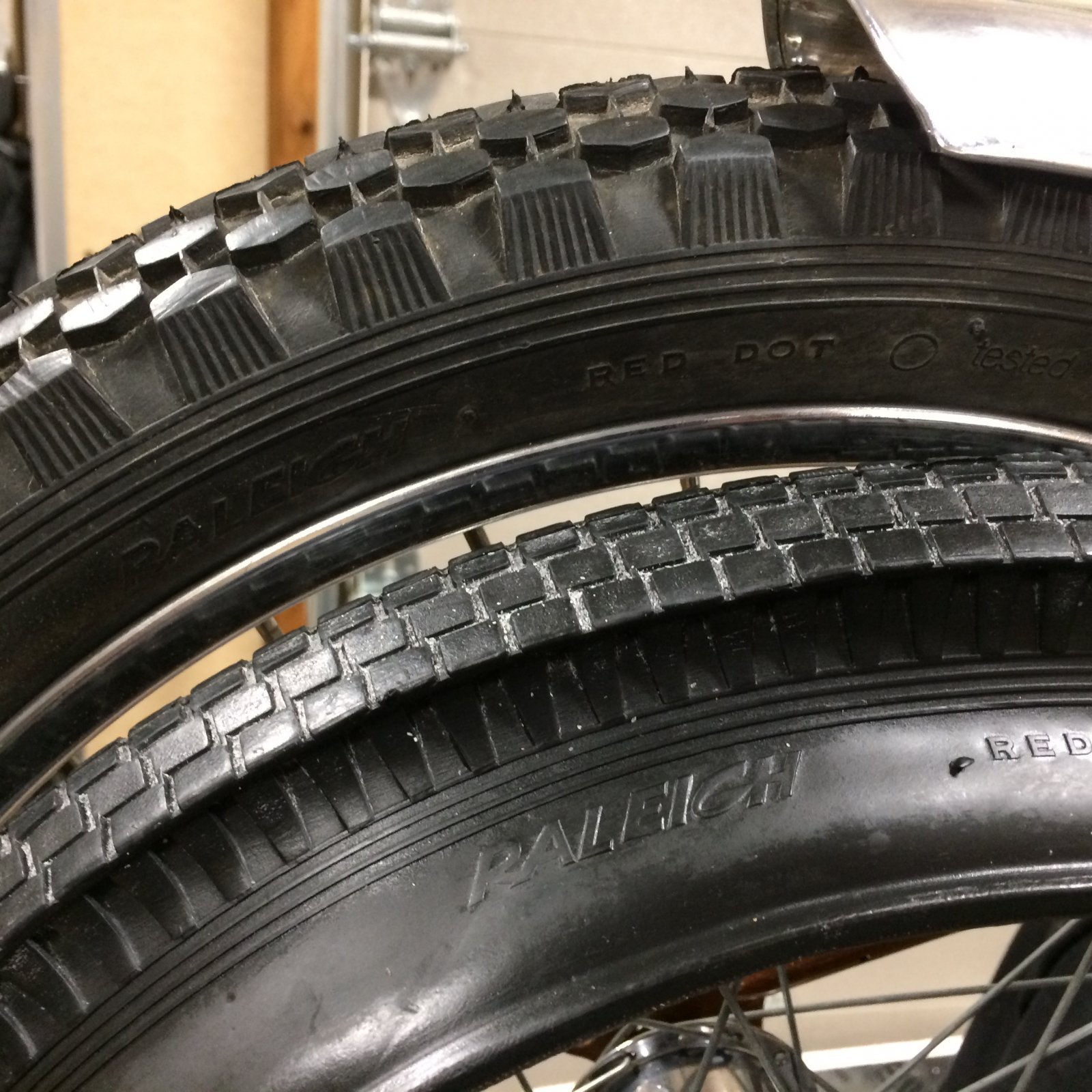 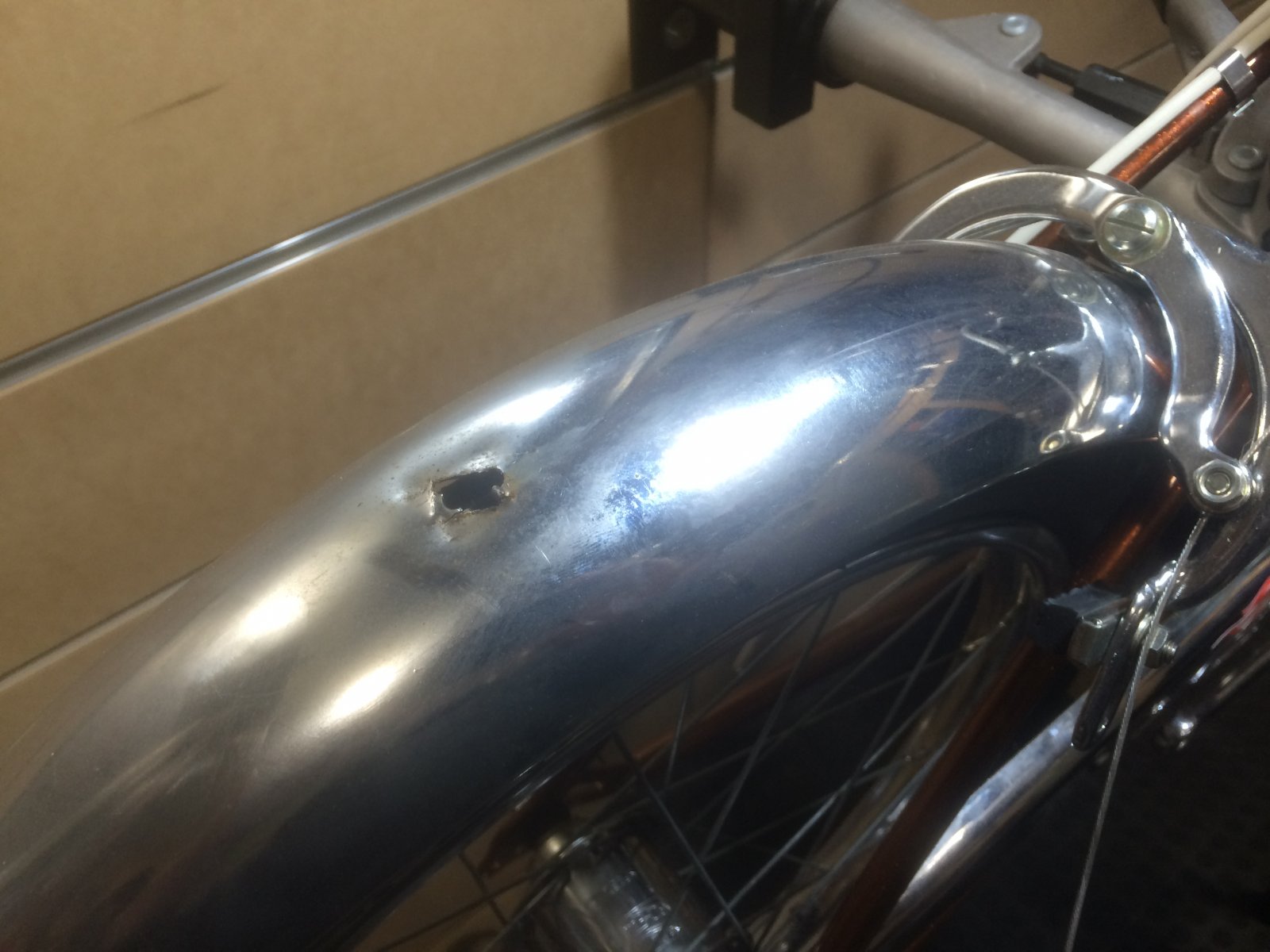 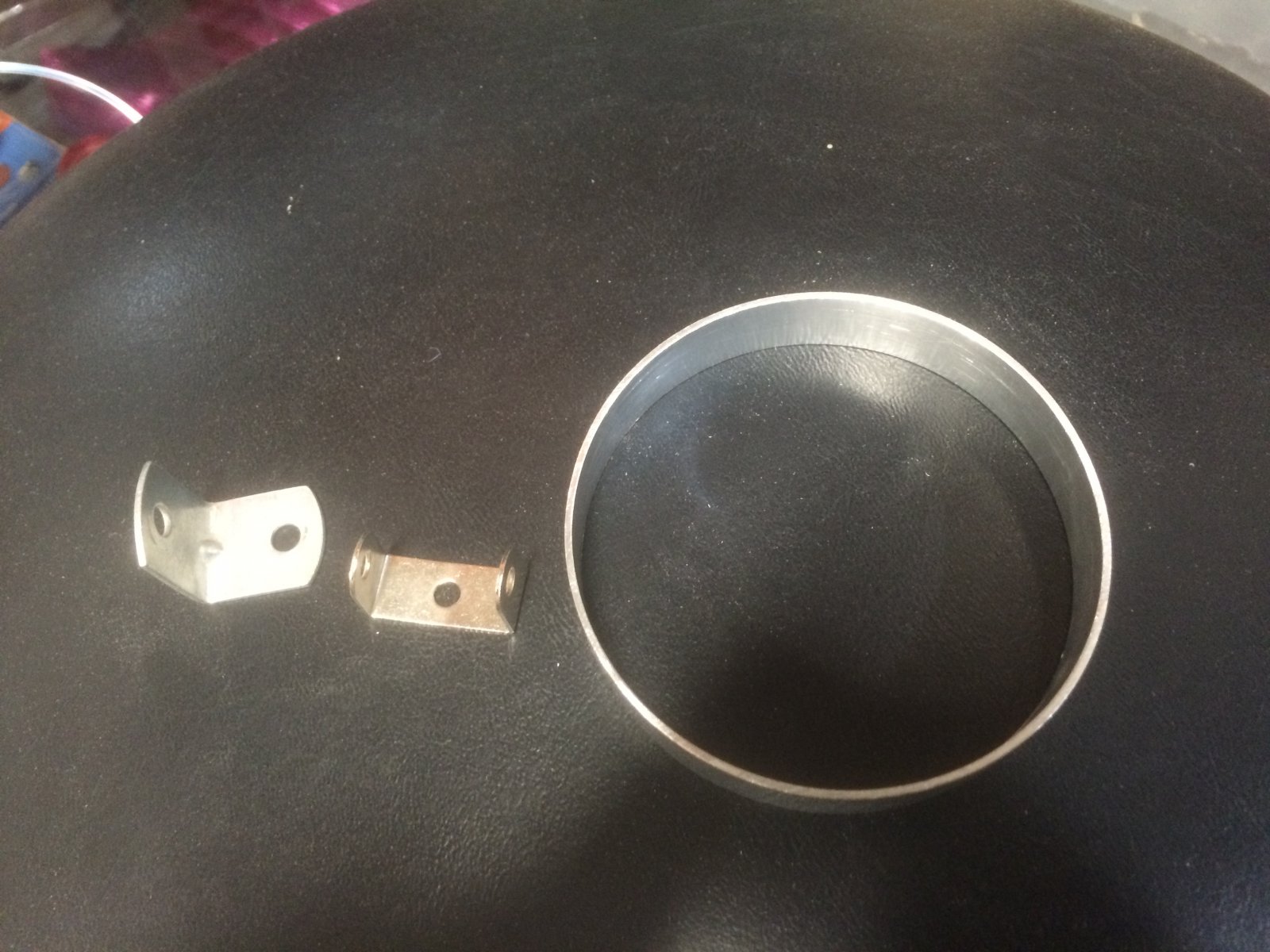 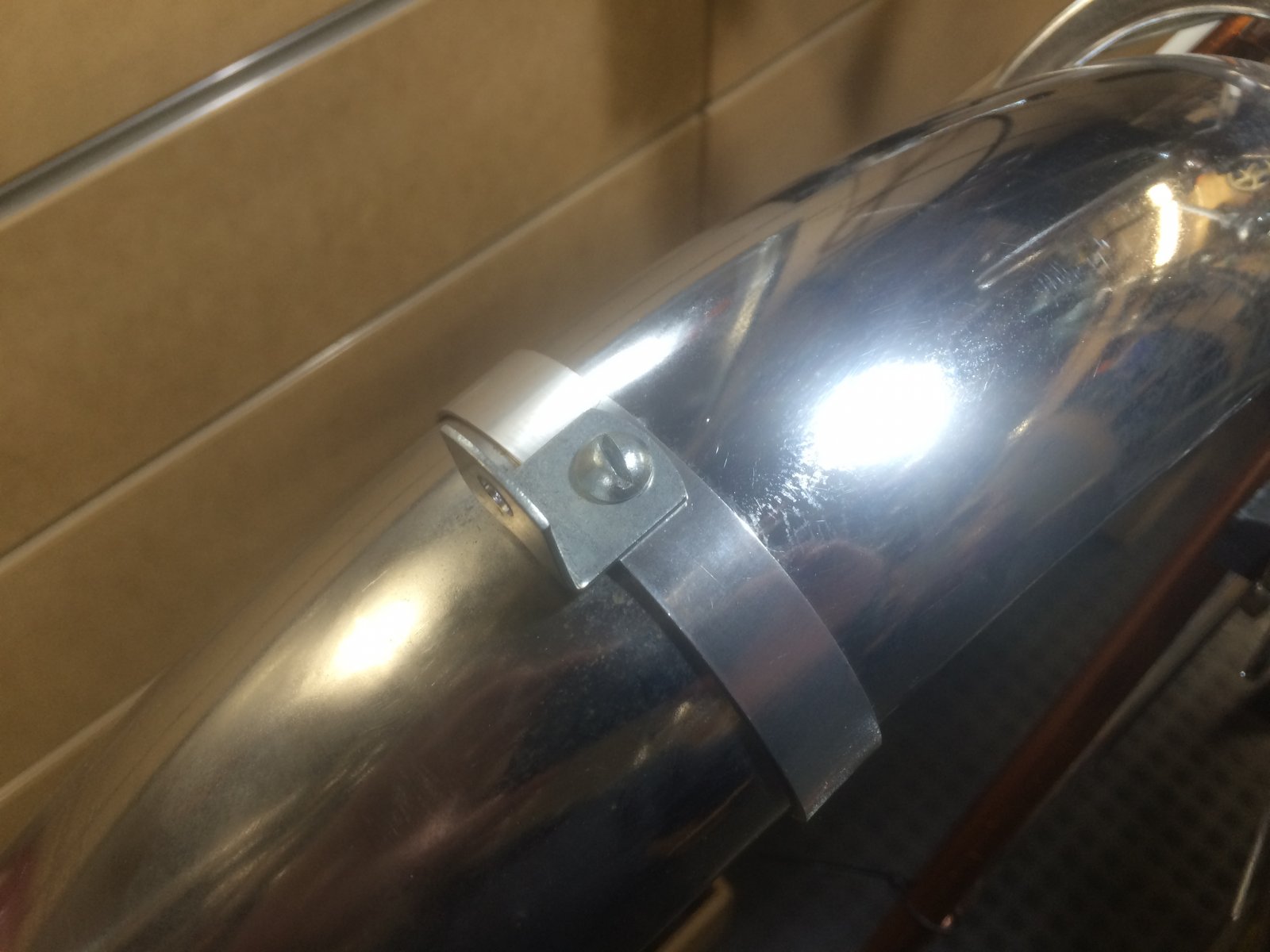 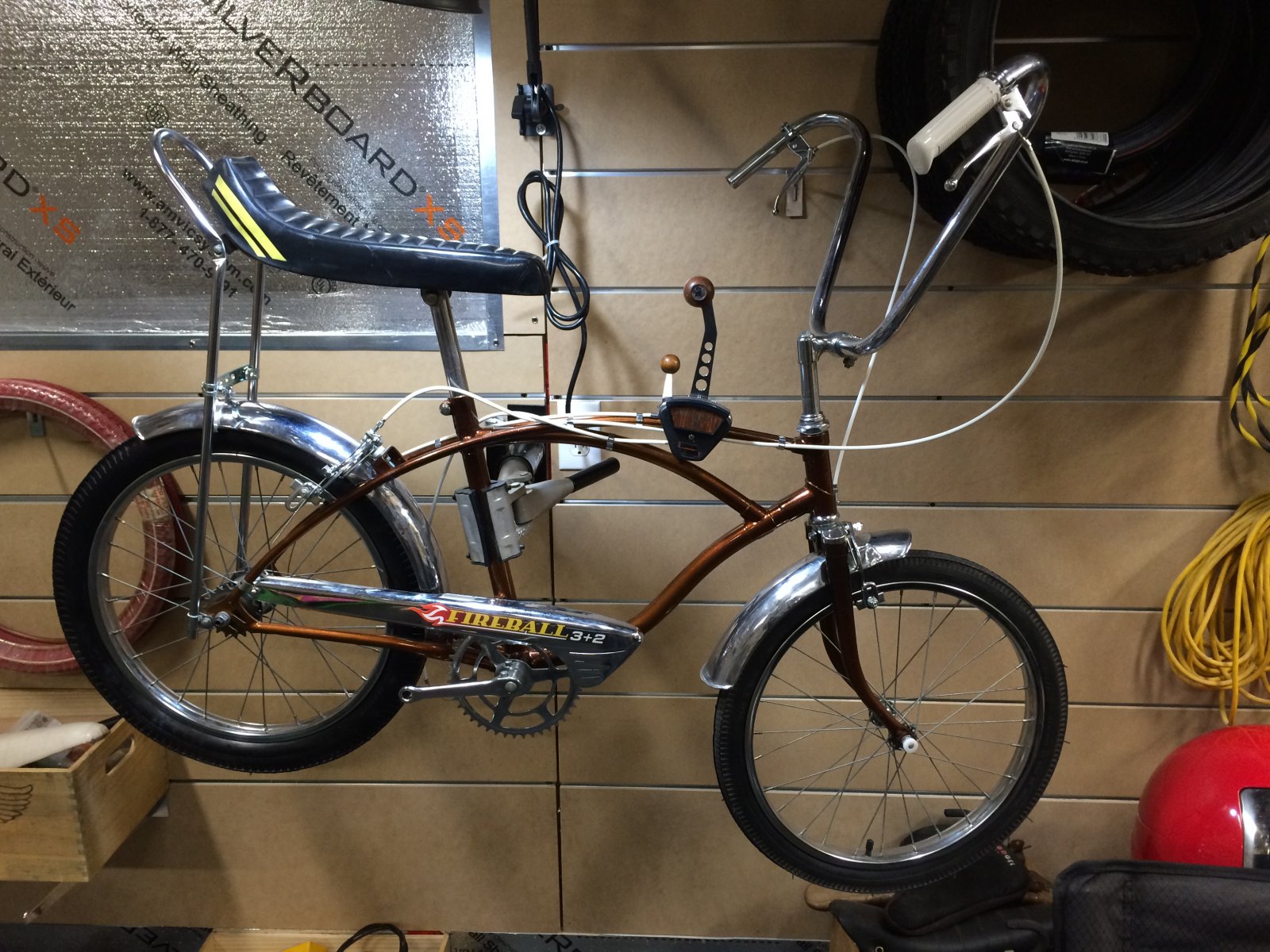 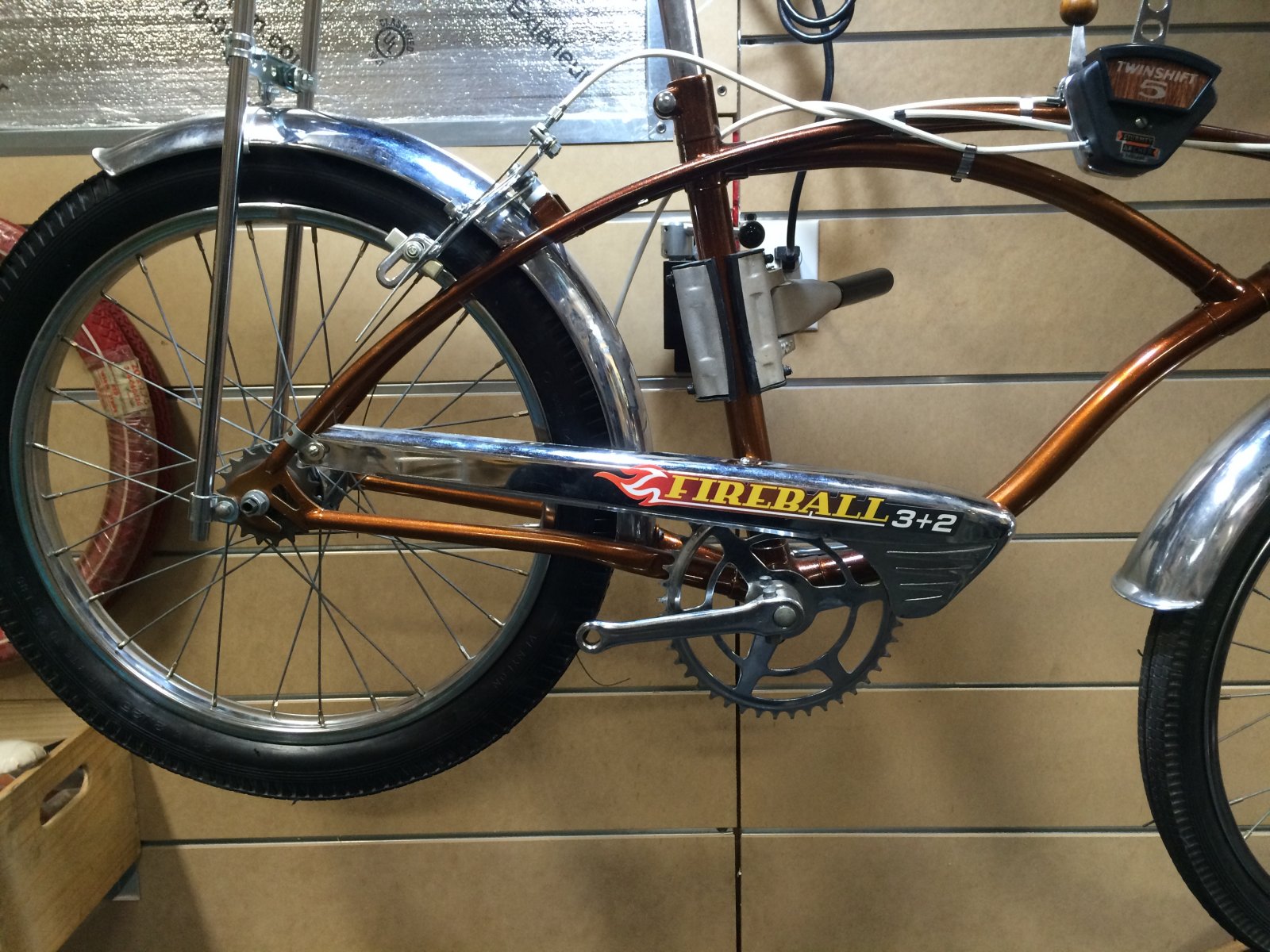 I really like that black seat on there! Especially with the yellow racing stripes. They bring out the yellow in your cool chain guard sticker! The black seat looks really 'tough' with the black tires and your fabulous frame color.

I've got an idea. Look for a bar grip that is black (or yellow!) that would slip over your shifter grip on the right. Maybe a throttle grip for a motorcycle would fit over it, with slight modifications?

OddJob said:
I really like that black seat on there! Especially with the yellow racing stripes. They bring out the yellow in your cool chain guard sticker! The black seat looks really 'tough' with the black tires and your fabulous frame color.

I've got an idea. Look for a bar grip that is black (or yellow!) that would slip over your shifter grip on the right. Maybe a throttle grip for a motorcycle would fit over it, with slight modifications?

Oddjob, I kind of agree with you and appreciate your input. I'm actually considering going back to the other style of twinshift, even though I've been wanting to use the woody shifter on a bike for a while. If I stay with the black seat, I might touch it up and repaint the white stripes. I'll also have to change the cables out to black ones.

I'll think about it over the next few days and tinker when I get back from the in-laws. 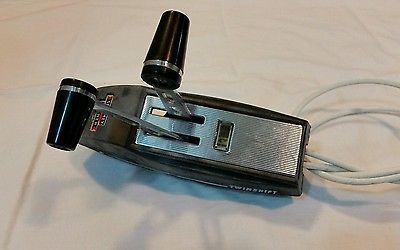 Enjoy your holiday time. I like the woody shifter on there, with the black seat. Black and your copper brown / bronze frame look great, and the chrome makes it sparkle! These may not be 'traditional' hot rod colors, but if you look at some of the vehicles being produced on the current 'MOTORTREND' channel shows, your colors are spot on!

I also like the white housing. Here's a thought, paint the stripes on the seat white! If you wanted to, you could paint the tall shifter knob white, go for the 'cue ball' look. Add a left hand white grip, and your'e there!

Can you tell I am finished with my own build, but still have ideas percolating ?

Still experimenting with seats. I bought this mesinger seat on ebay. It actually showed up looking much nicer than the pictures in the listing. I would say it's NOS, but I imagine it's supposed to be white and has yellowed with age. I'm not sure. Great seat though and I got it cheap. I like how it matches the colour in the guard decal, but I would need similar grips to match. I'm still leaning toward white though, and I have some white vinyl paint that I might be spraying on some seats soon. Stay tuned!! 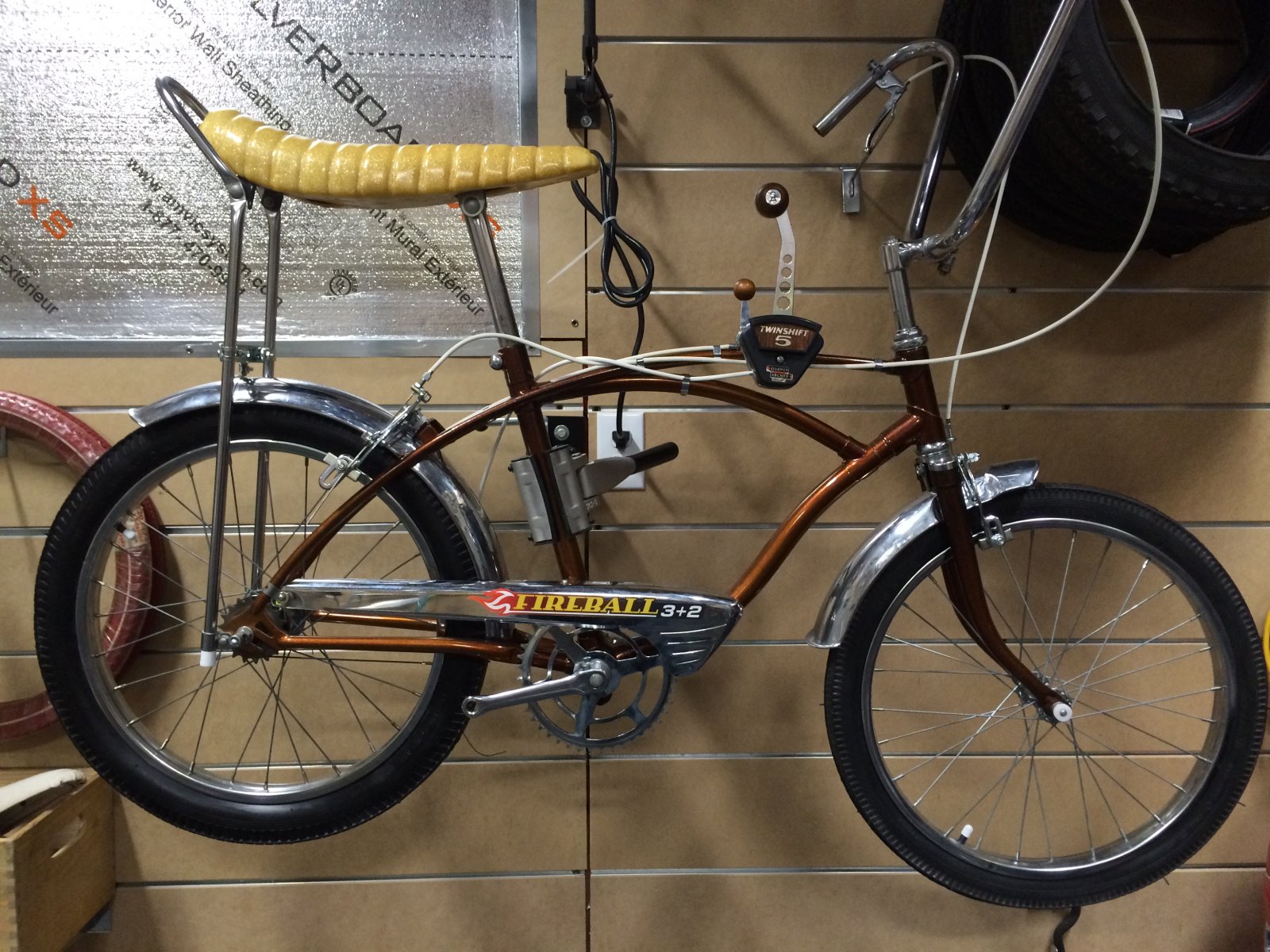 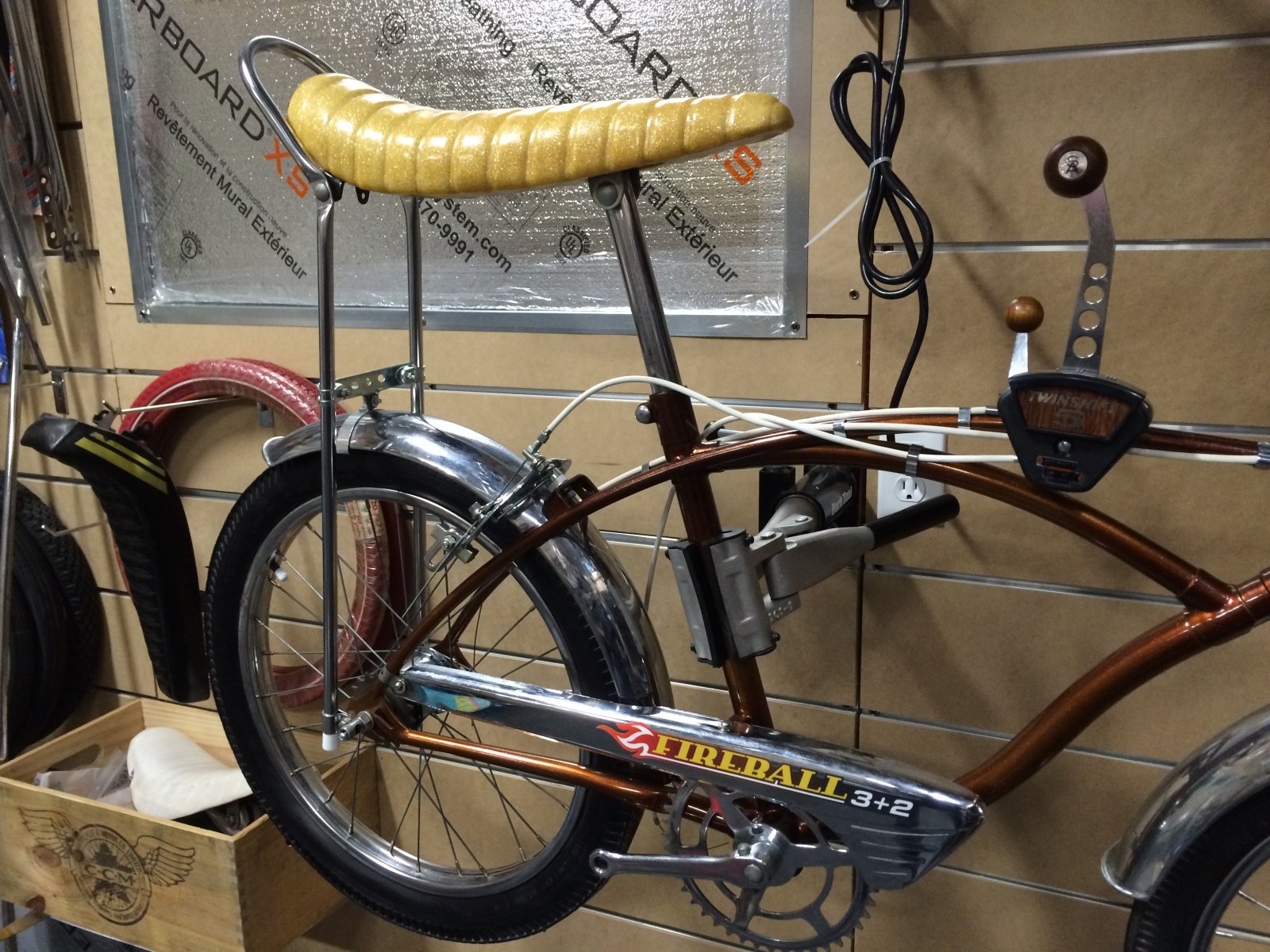 Love that seat!! Why not get a Rustoleum color to spray on some white grips instead. That seat is the bomb!! Perfecto!

That seat looks great on there!
MY INTRO AND BUILD LINKS/"HOW-TO" LINKS:
https://www.ratrodbikes.com/forum/index.php?threads/lukethejokers-intro-and-links-big-moves.65513/​

The seat gives the bike a look of a nos bike that was left in a crate and only the seat faded.
Sorry trying to learn

As they said,
that seat Rocks.

Thanks guys. I do like the seat, but I kinda bought it for another bike. I'll let it sit there for now. I have some time to think about it. Just missed a fireball fender on Ebay. It would have been an upgrade as it had the correct bracket attached and it was in really nice shape. I saw the seller was listing parts the first night and should have asked if the fender was going to be for sale. Sure enough, the next day it was listed and someone scooped all the parts for best offer. Win some, lose some. My fender is still pretty good, but these are the little details that always bug the builder even when others might not notice. Happy new year folks!!! 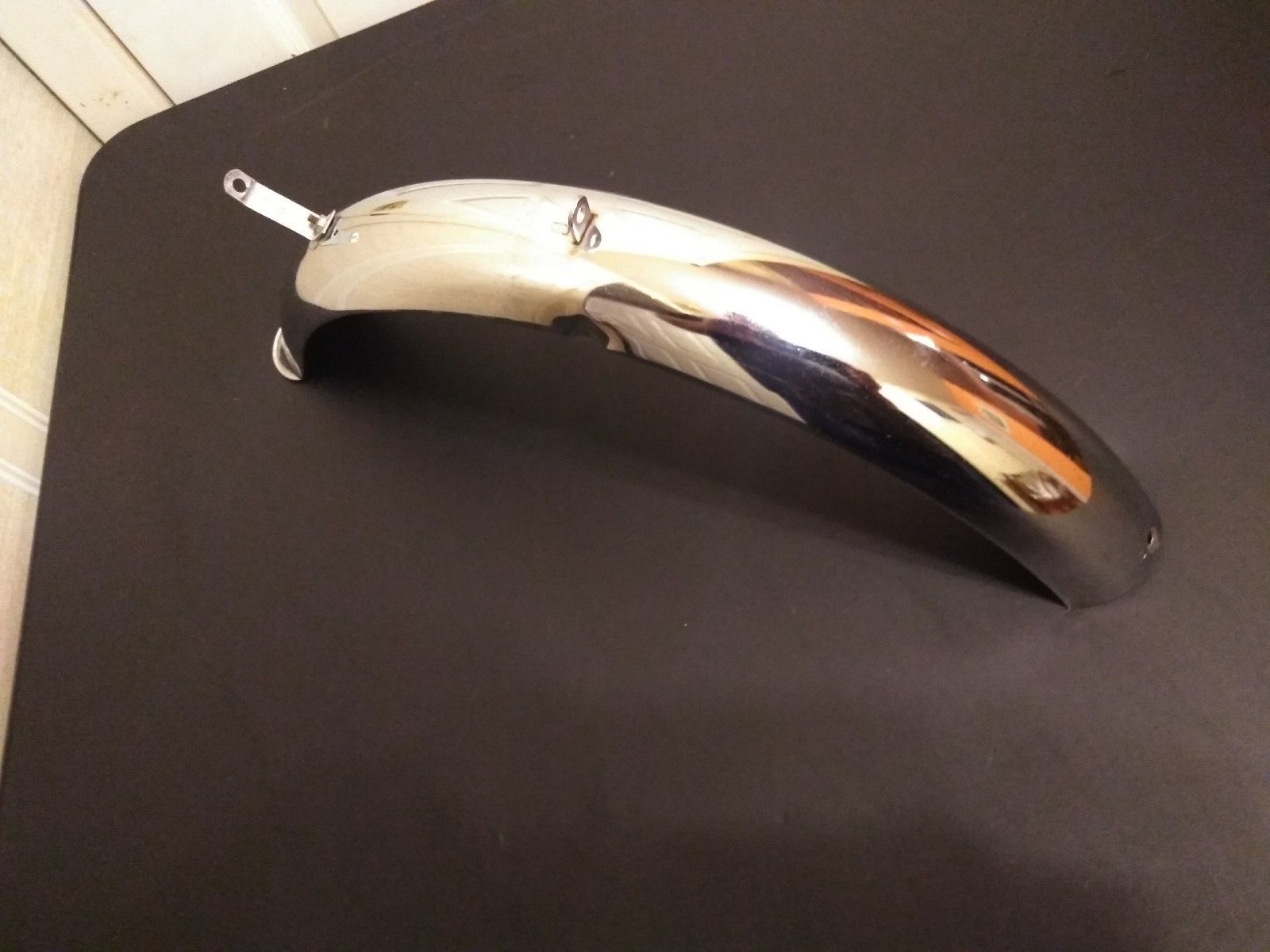 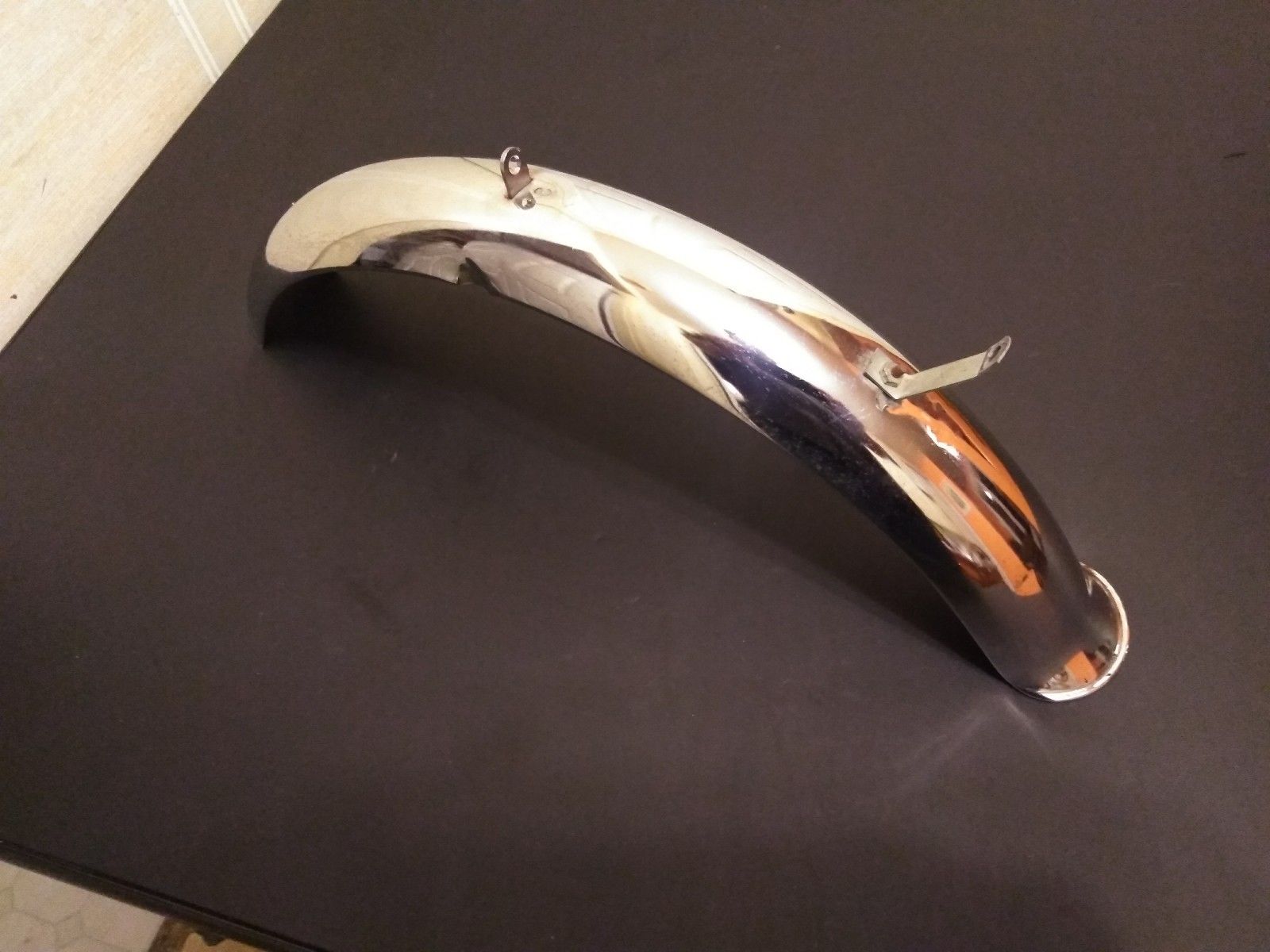 That seat looks great on your bike. Surely don’t see many of these old Raleigh’s around; yours is a fine example.

furyus
Yet when I surveyed all that my hands had done, and what I had toiled to achieve, everything was meaningless, a chasing after the wind; nothing was gained under the sun. Ecclesiastes 2:11

Well, I decided on the black seat for a couple of reasons. I like the look of it, and the other seat is earmarked for another bike. Had the chance to spruce it up a little for the final bike. I got some white vinyl spray paint to clean up the racing stripes, and some Hi-build black for the under carriage. Seat looks almost brand new. I'm currently scouting locations for my final photo shoot. It's a little harder in the winter, but hoping for some sunny days to get some shots. Snowing outside right now, so might have to find somewhere indoors that looks cool. Stay tuned for the final results! 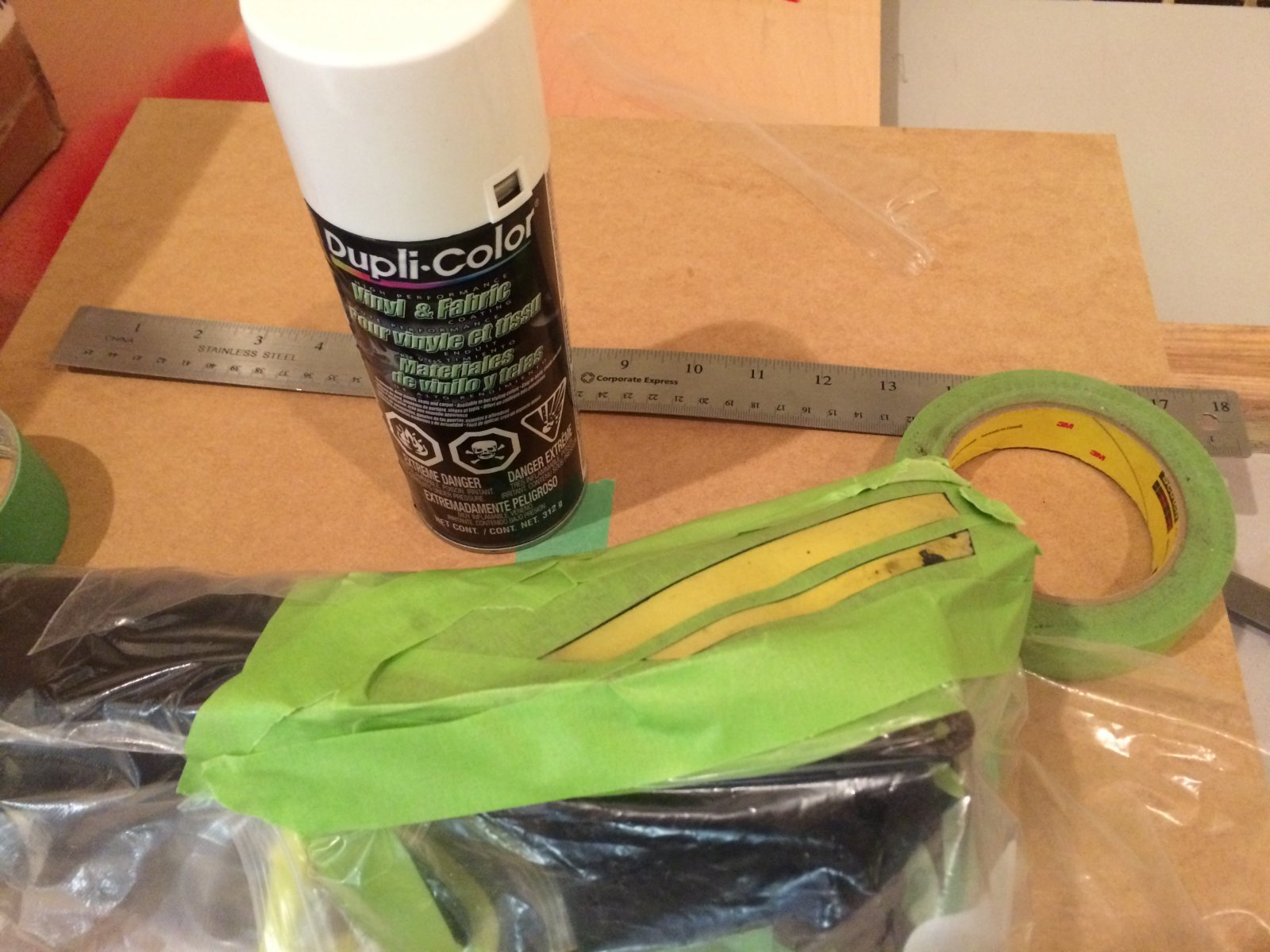 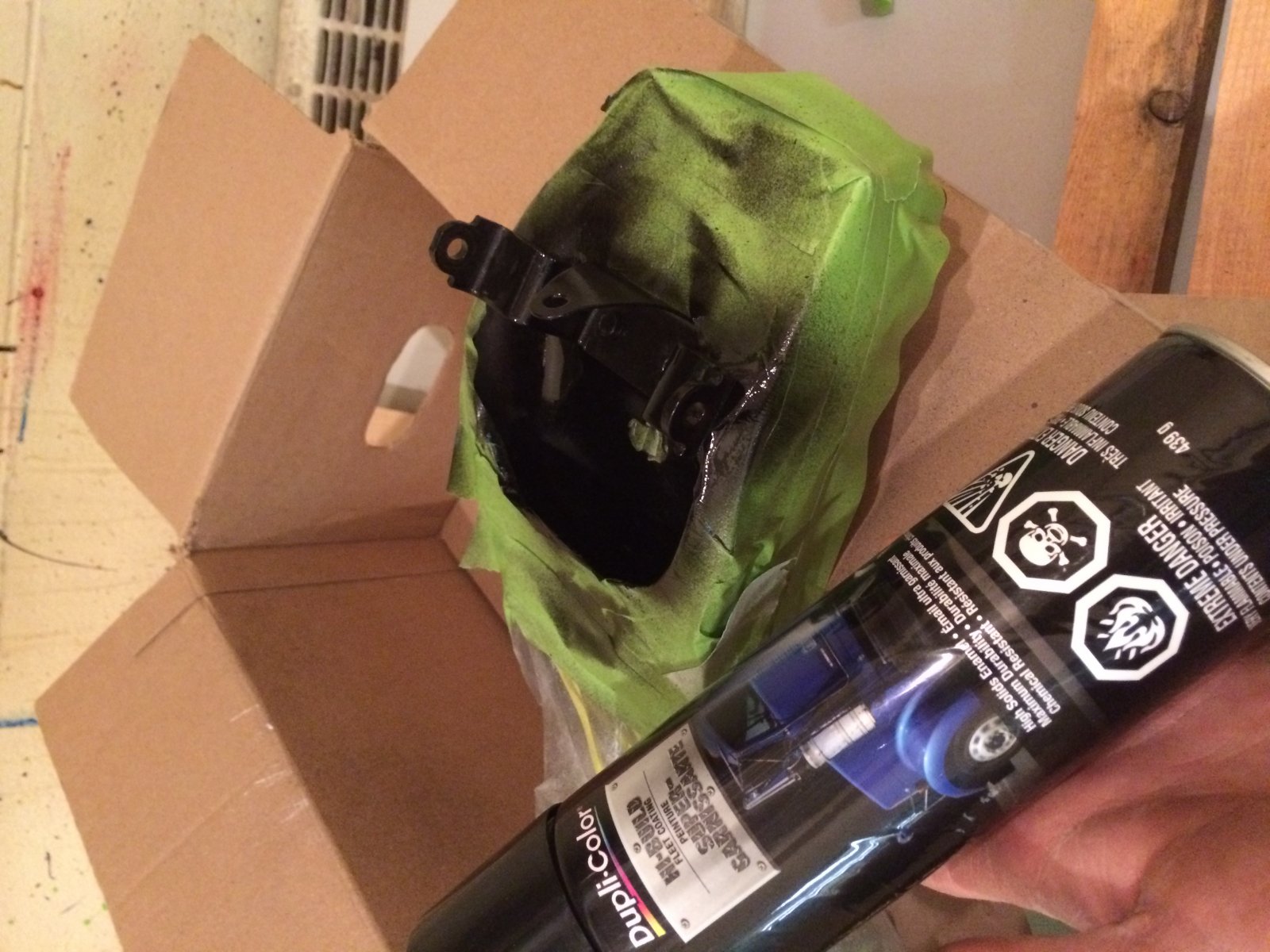 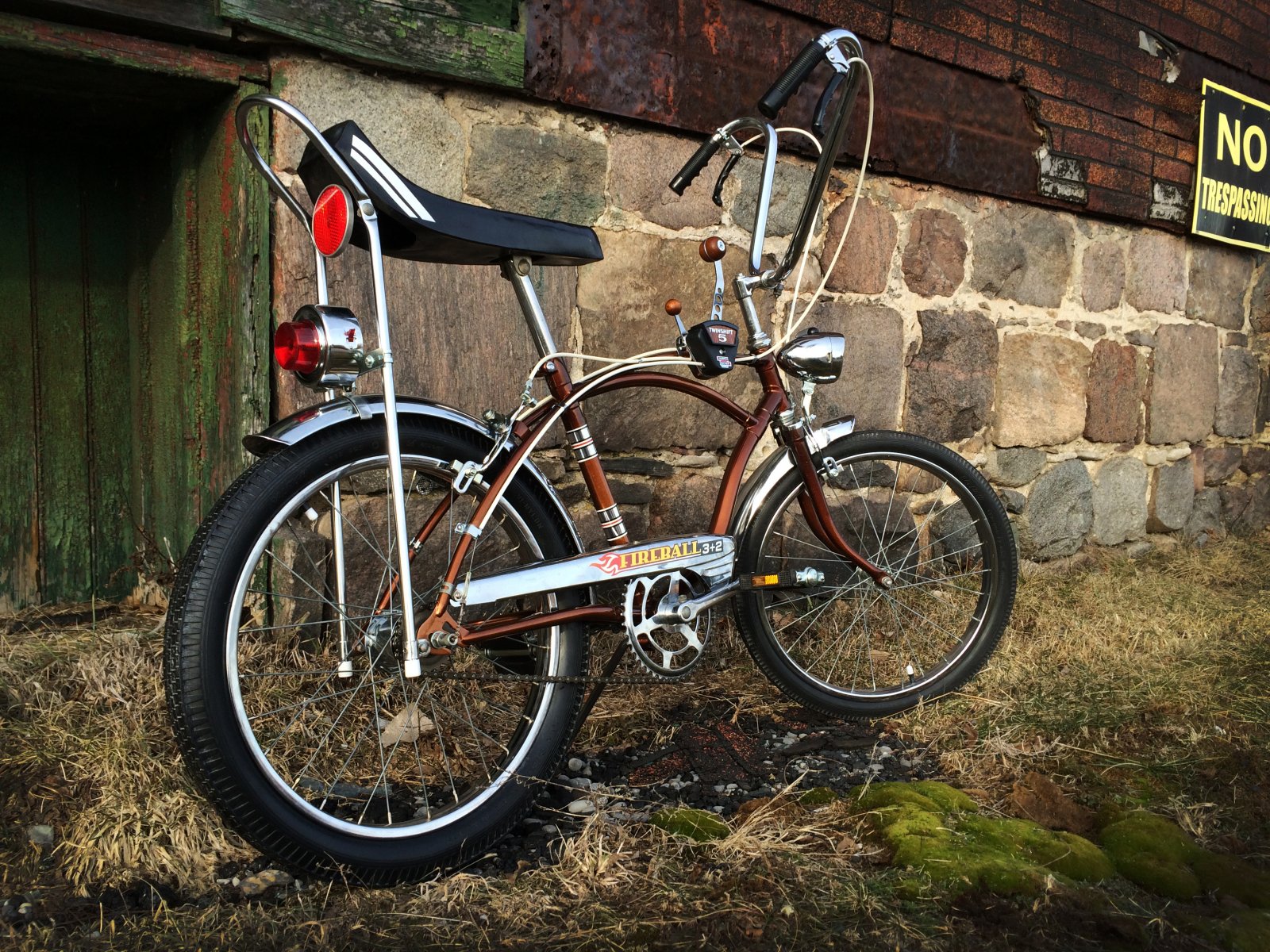 That's a nice looking bike. Love the color.
--rick (one of the usual suspects at Retro-Ride Hagerstown)