The bike will be a little Italian 24" grocery-getter I bought years ago. 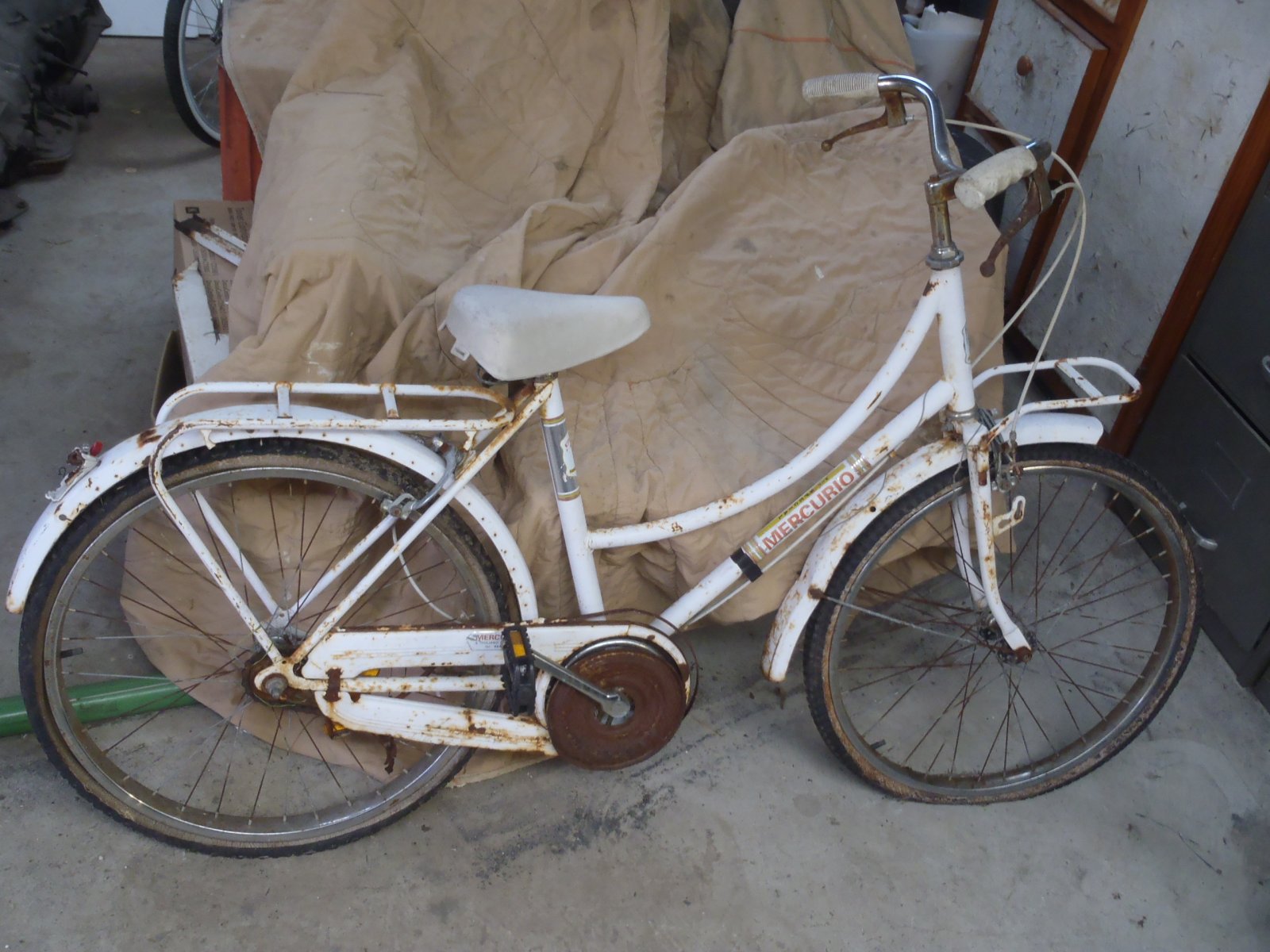 The moment I saw it I knew it would make a nice flipper, hence the name (I don't know Italian so have to trust google translate)

The frame and the rear rim are the only parts of the bike that will be used.
Frame changes will be removal of the luggage rack, shortening the steer tube and welding a seat clamp back onto it since a previous owner cut off the top part of the seat tube.
My intention was always to build it so it can be un-flipped, so I will have to make bolt-on drop-outs, bottom bracket and seat post.

Went thru all my parts and did a quick mock-up....... bars will be chosen once I sit on the bike. 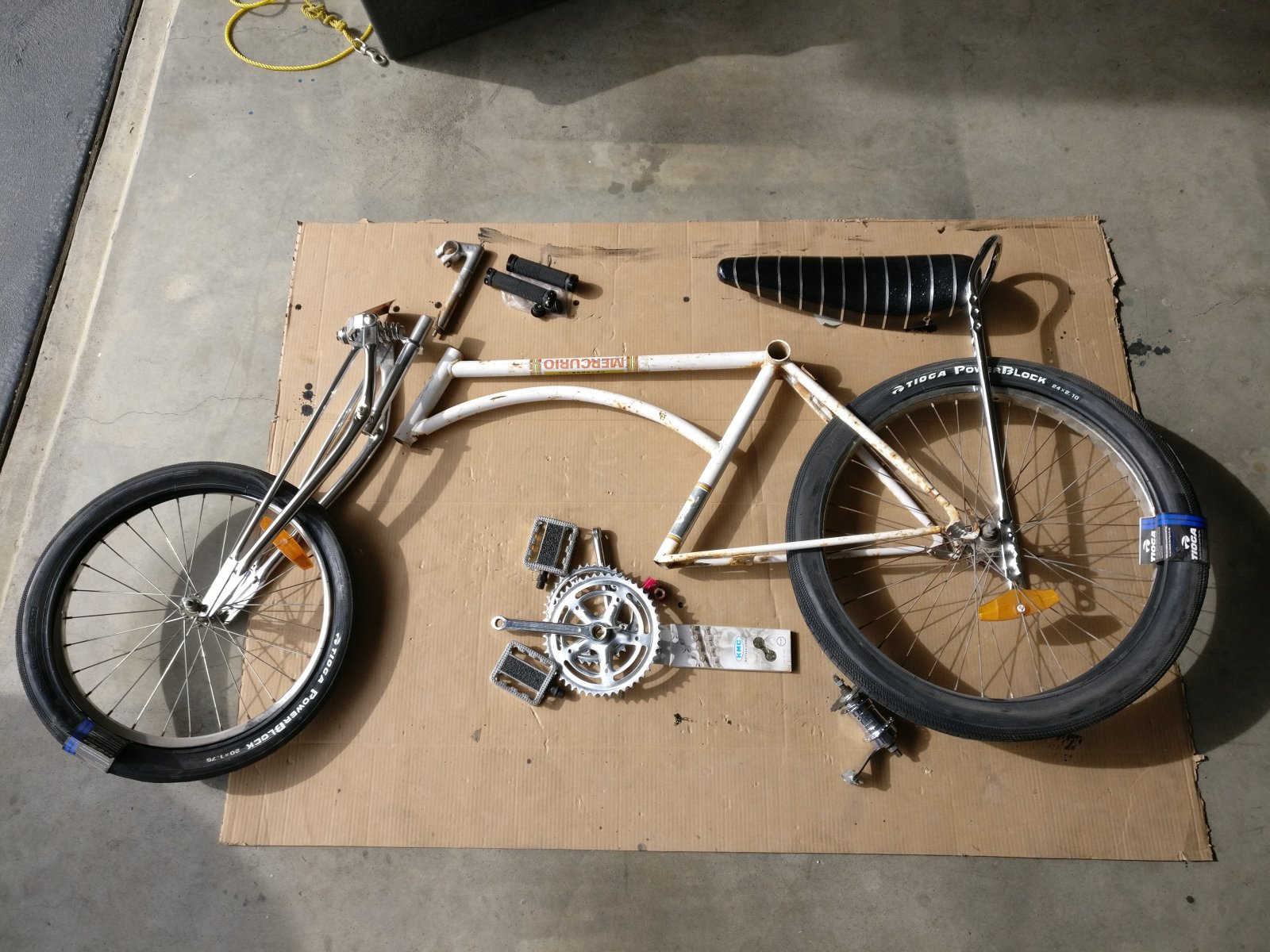 I'm not sure why you would be concerned with making it possible to 'un-flip' considering that the top of the seat post is already gone and you've cut the rack off. Plus you'll probably like it too much to bother going back!

But, build it the way you want it. That's just my opinion! Have fun!
Last edited: Feb 18, 2018
Ask me about TRM Convertible Tanks!​

The Renaissance Man said:
I'm not sure why you would be concerned with making it possible to 'un-flip'
Click to expand...

No practical reason, and I too am sure it will never actually be "un-flipped", I have done a few welded up flips before and previous winter MMBOs have had a rule that frames could not be changed, so that lead to the desire to do one that could be un-flipped, and in the long run the difference in work between cutting and and welding vs. making bolt on s is minimal. 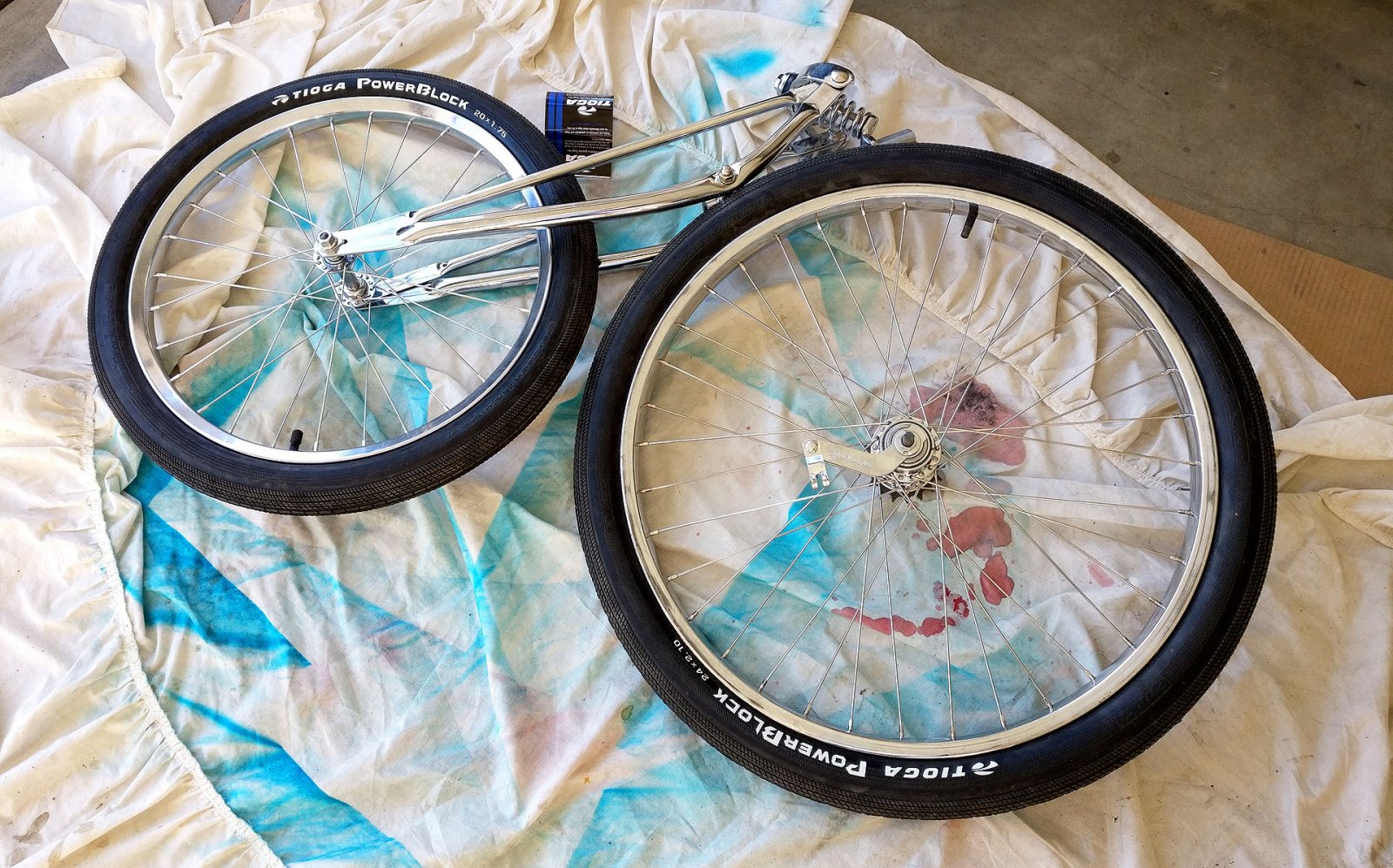 Front wheel is off some department store kids bike, pulled it apart, rim went in the oxalic acid and then everything was polished, then it was all all put back together with shiny new spoke nipples and finished off with a hub regrease. 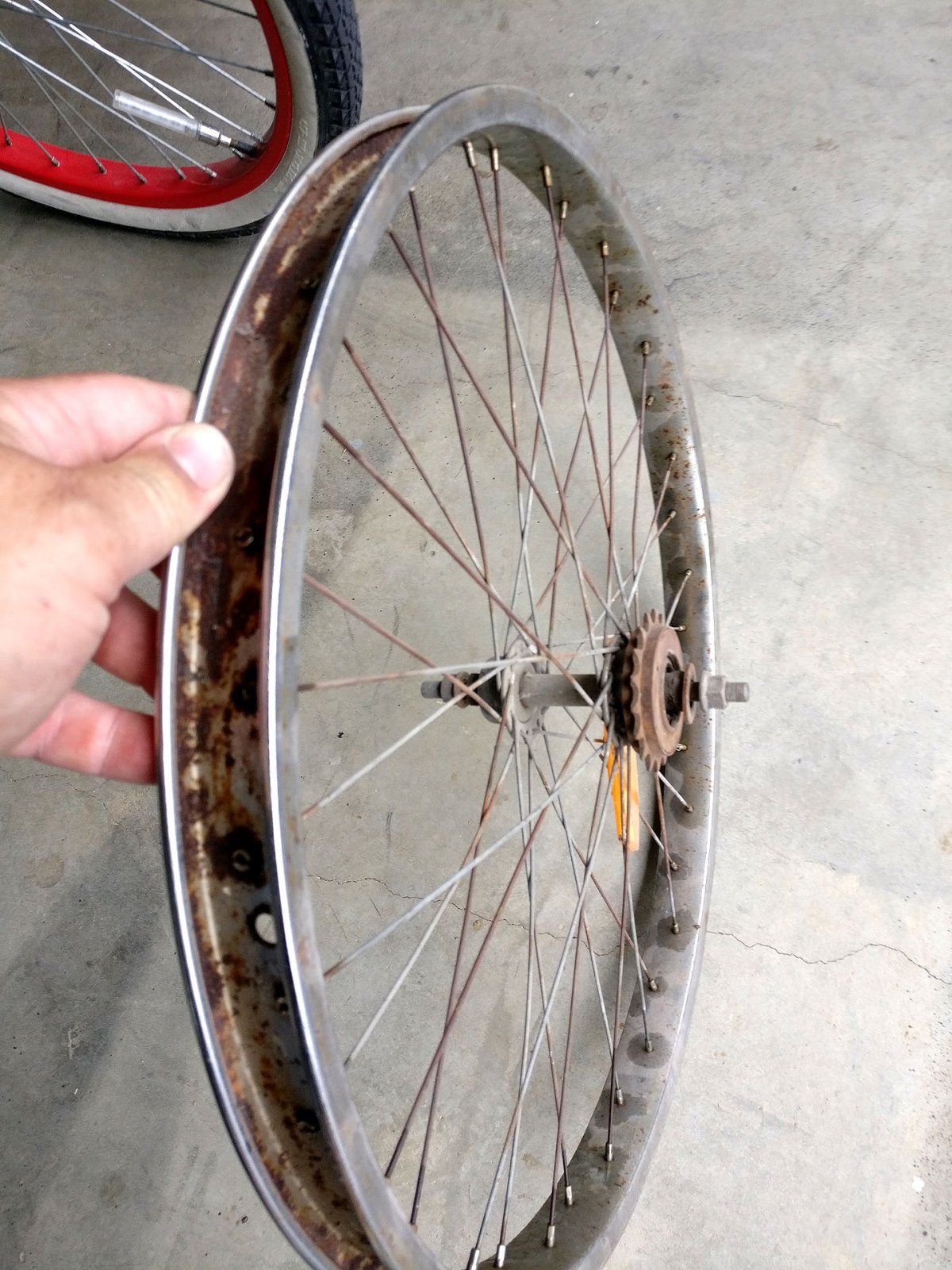 Rear wheel was also pulled apart but the only thing that was kept was the rim, it too was de-rusted in the oxalic, it's shiny now but showing its rim brake scars, but it will have to do as it's the only 24" I have. Had to get new spokes, not just because the old ones were knackered but the length would not have been correct for lacing in my treasured NOS "Favorit" coaster hub. Again, everything was polished before re-assembly. 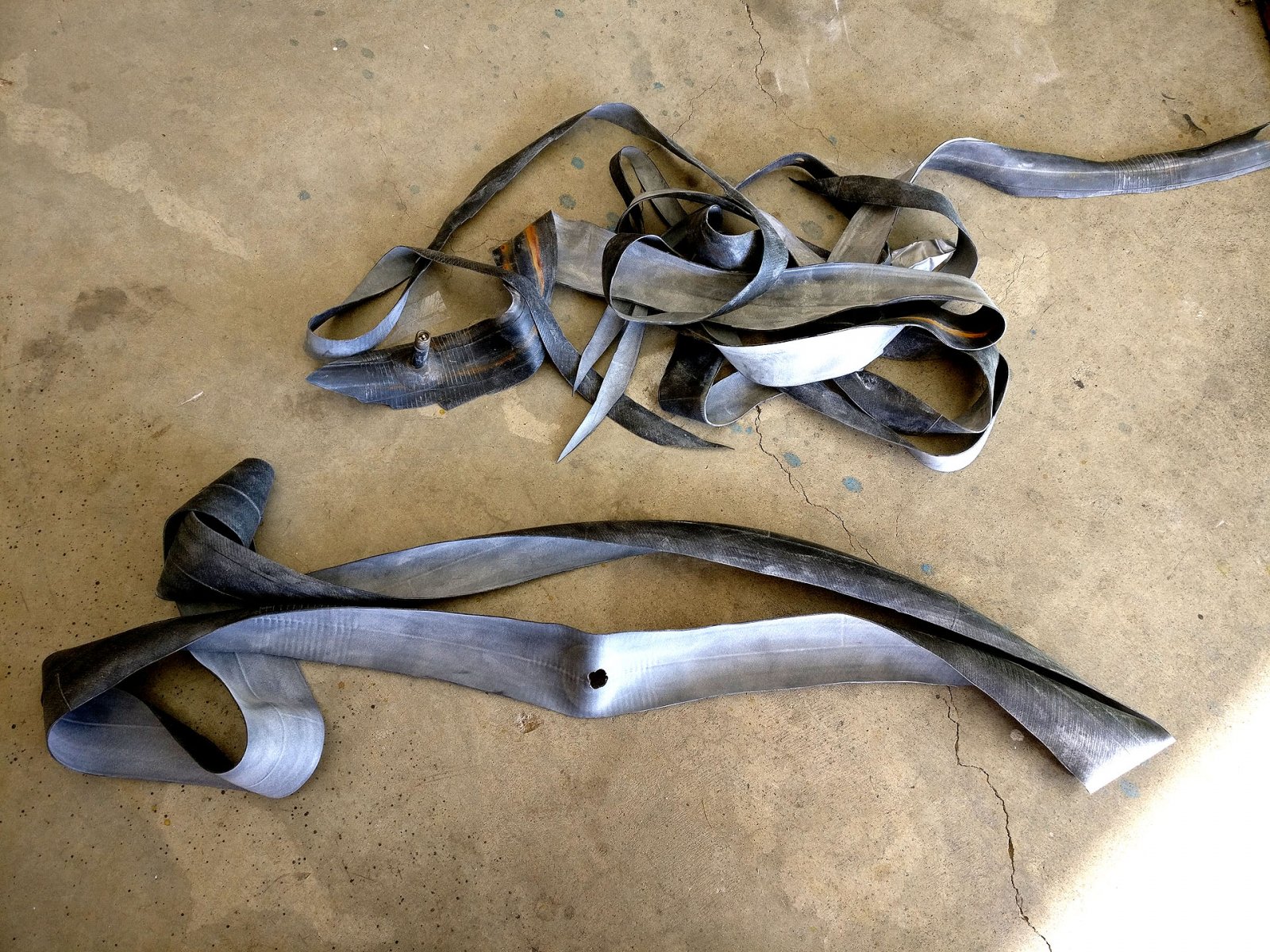 Stem also got tarted up, the chrome bolts de-rusted in the oxalic, nut replaced with a shiny new one, stem scrubbed in lye and then sanded and polished. 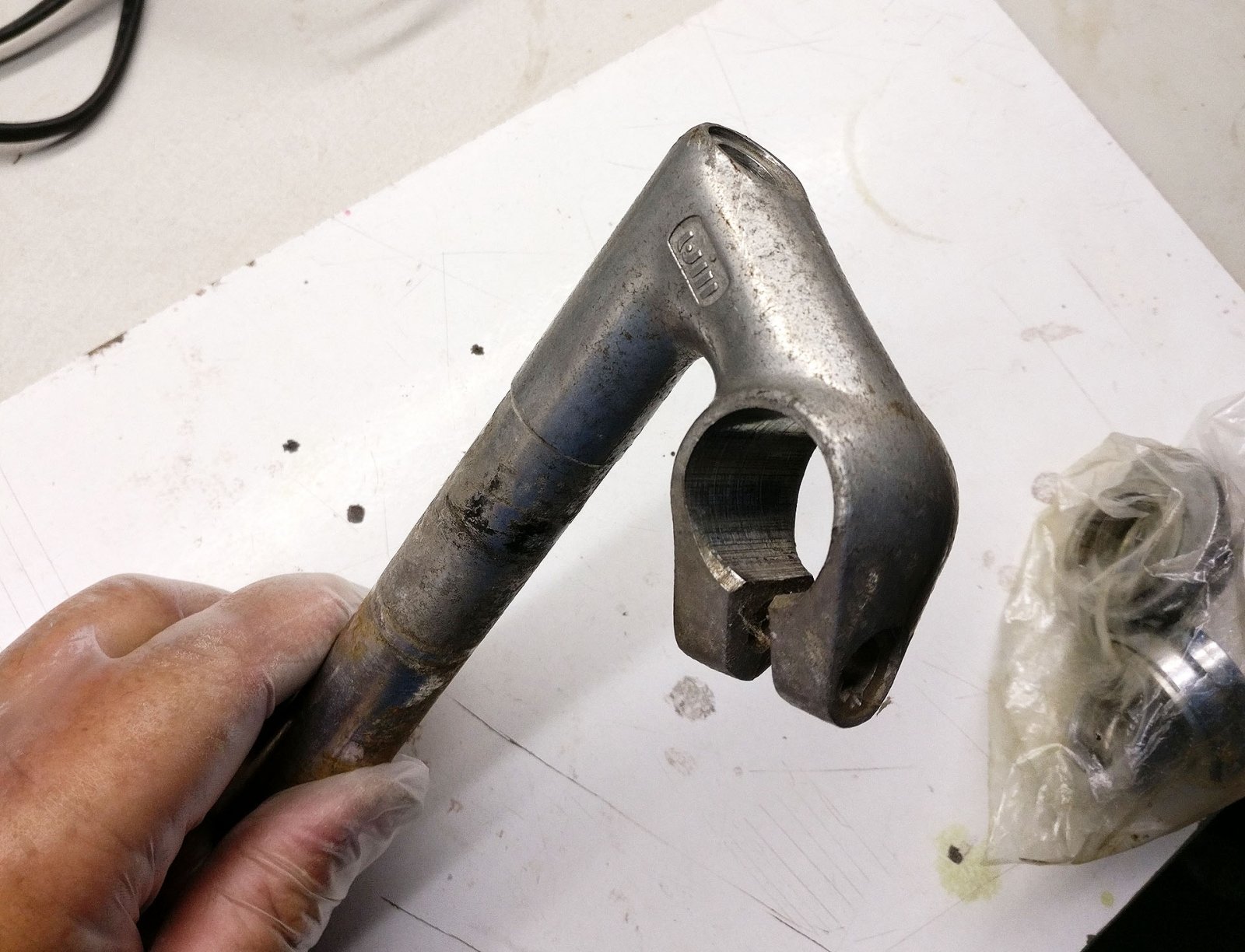 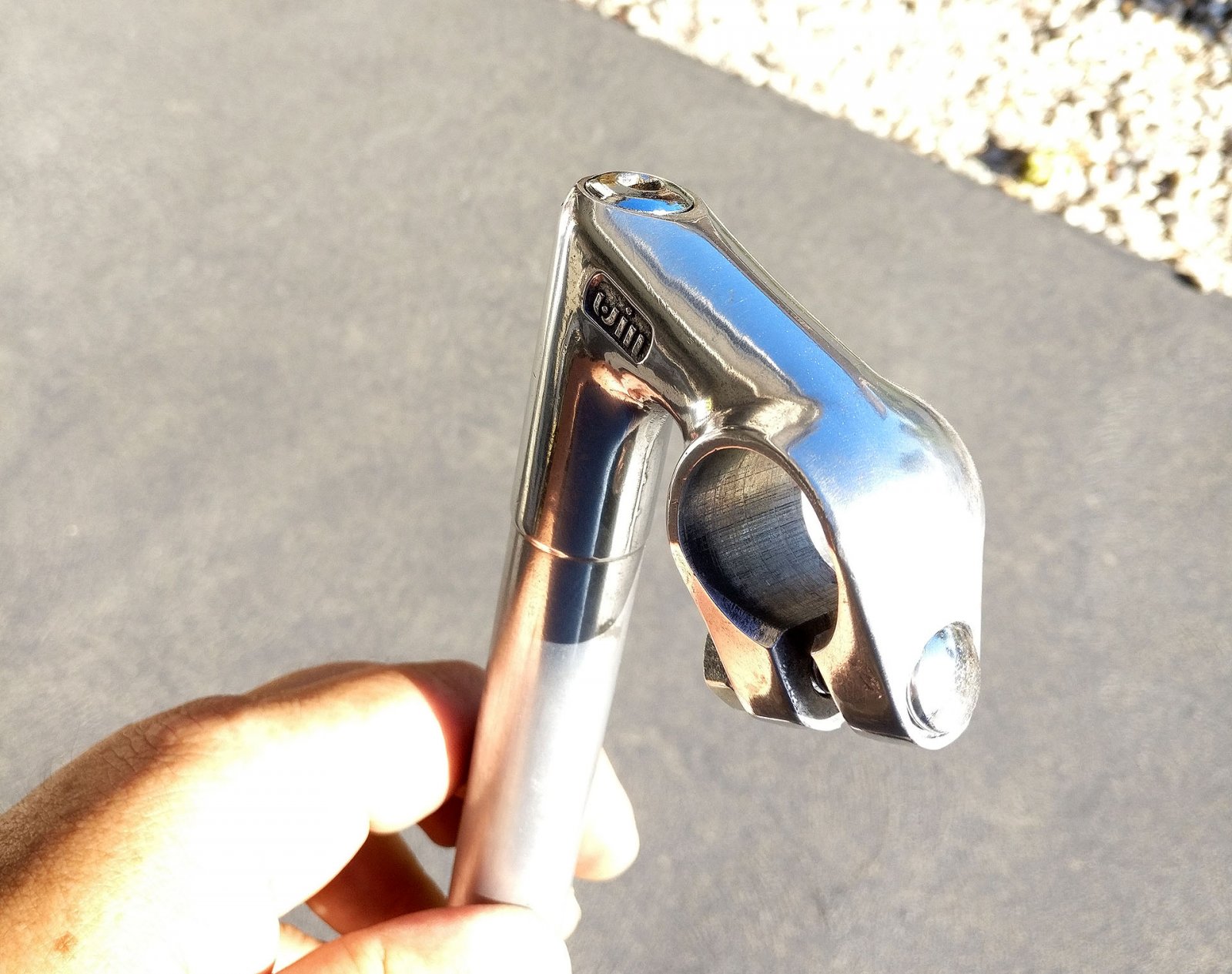 That's as far as I have gotten, now it's time to cut some stuff up. 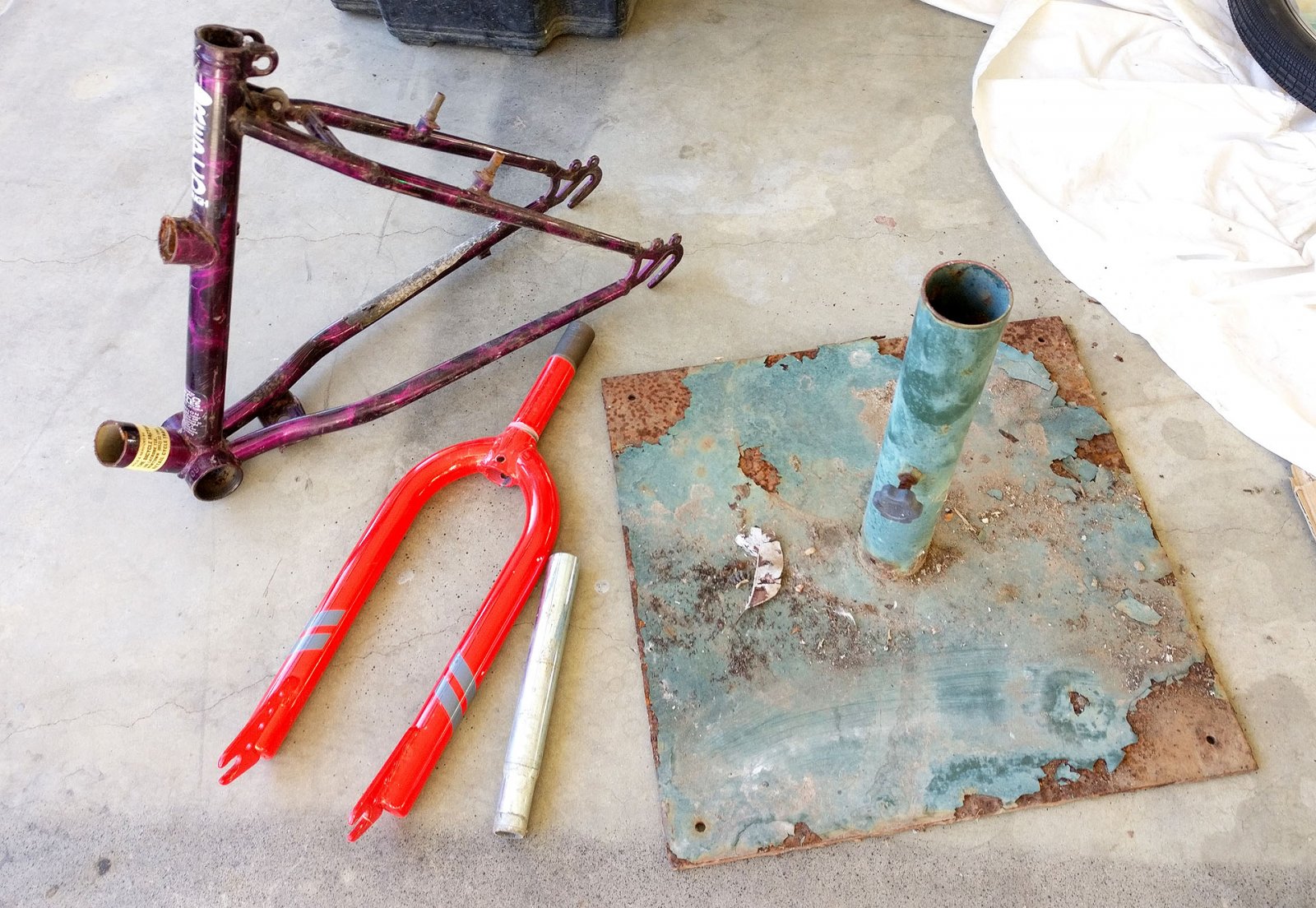 Some stuff got cut up, and a bit of grinding was done on them too. 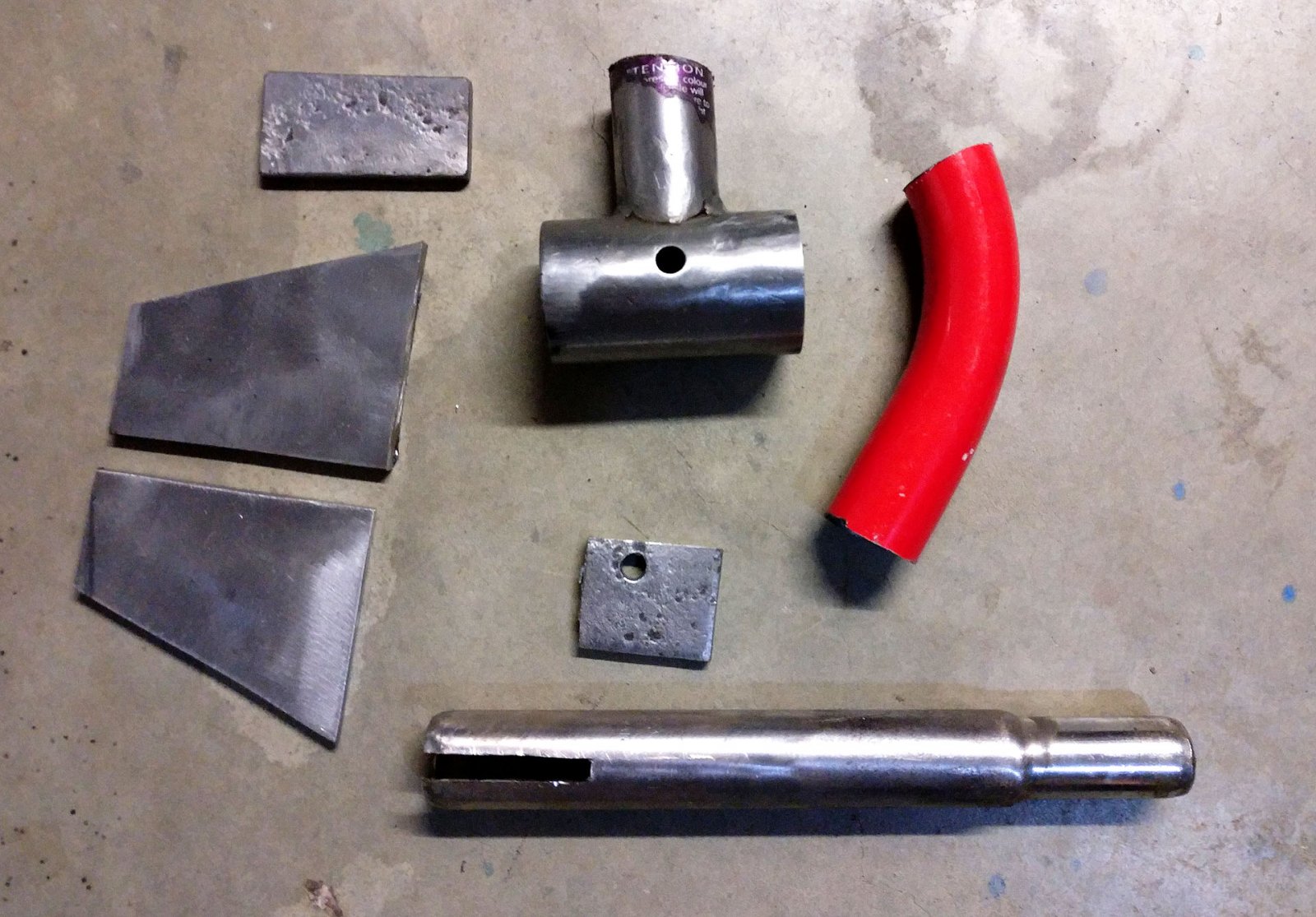 So now the welder comes out and that means that there is a LOT more grinding coming up :/

Welding done (and a lot of grinding to make it look better) so now I have:
a bolt-on bottom bracket 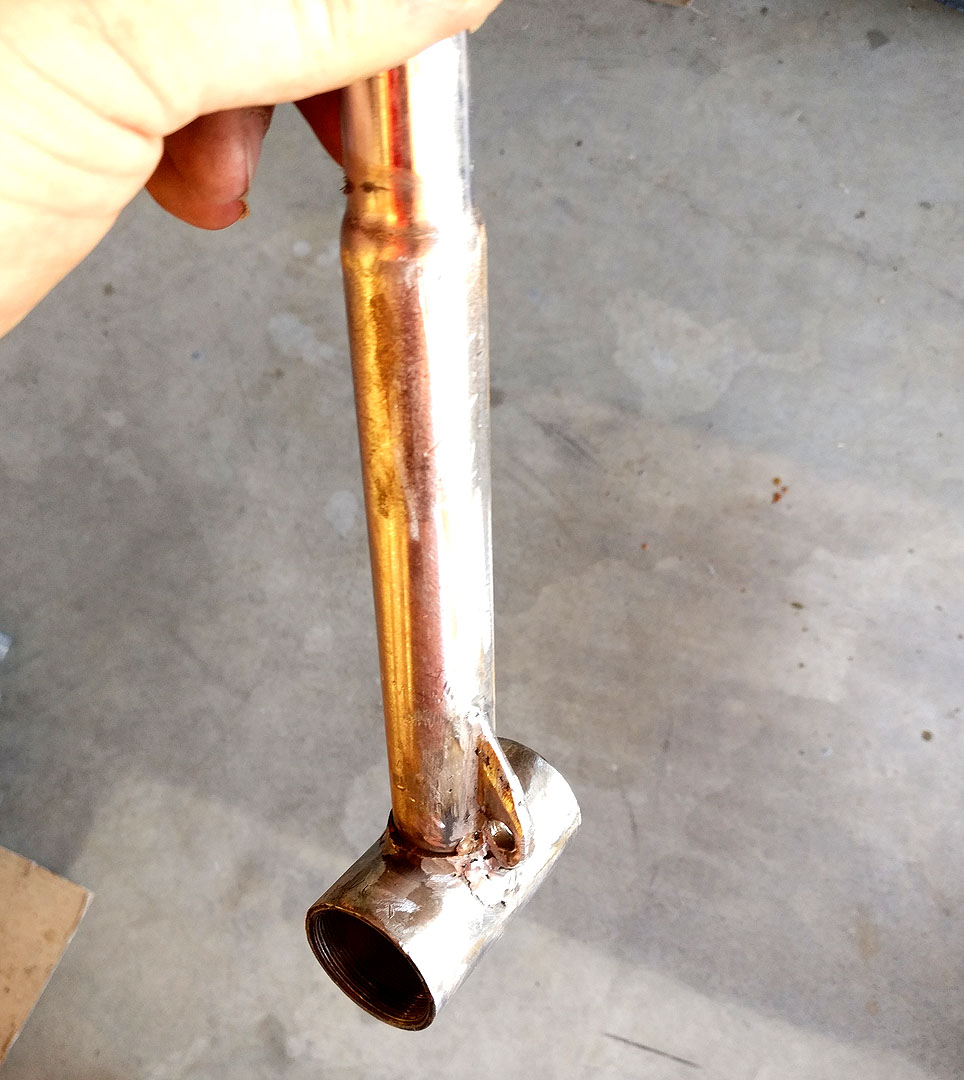 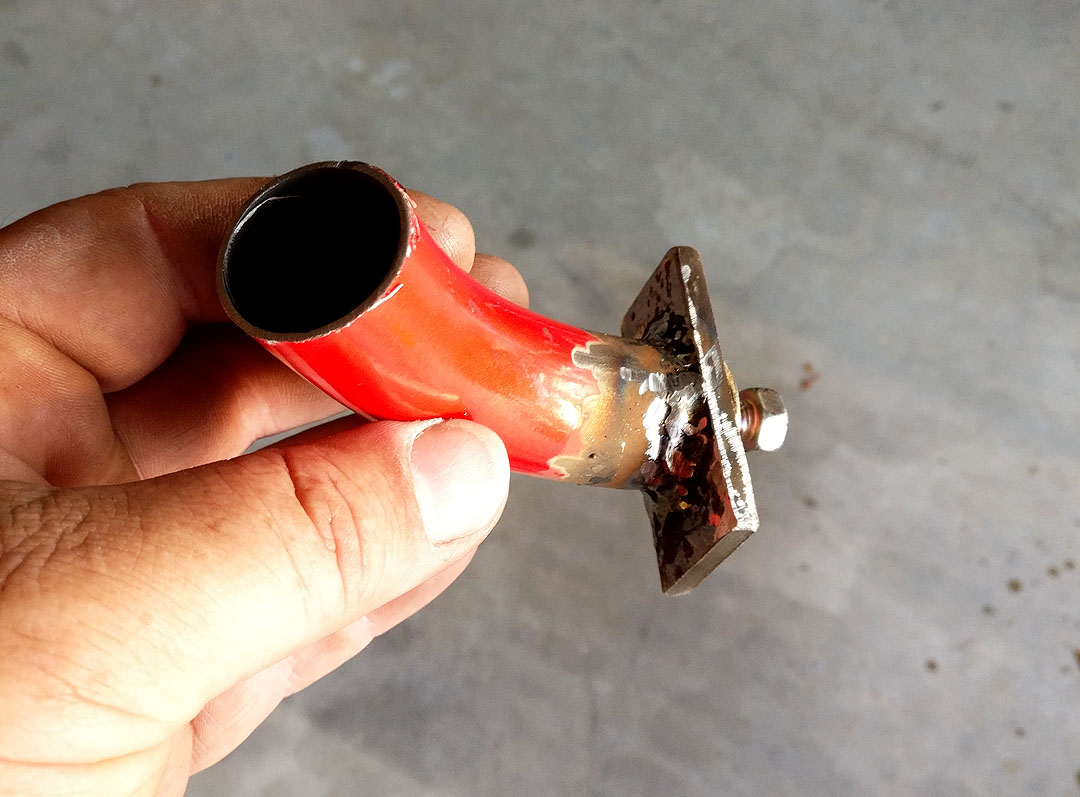 they will look much nicer after some filler and some gloss black paint.

I have built two flip bikes and cracked both bottom bracket welds. I used BB's from old ten speeds and the seat tubes slide right into the MTB seat tubes on the ladies bikes I flipped over. With no chain stays and no down tubes attached, it left only the seat tube weld to support a lot of torque. I see you beefed up the weld, good idea. I'll be welding a gusset into both of mine too. I love the style of frame you flipped, it's gonna be retro and racy at the same time.

Patina: Exposing the integrity of the material's passage thru time.....
Signature removed by the Mods for being too awesome 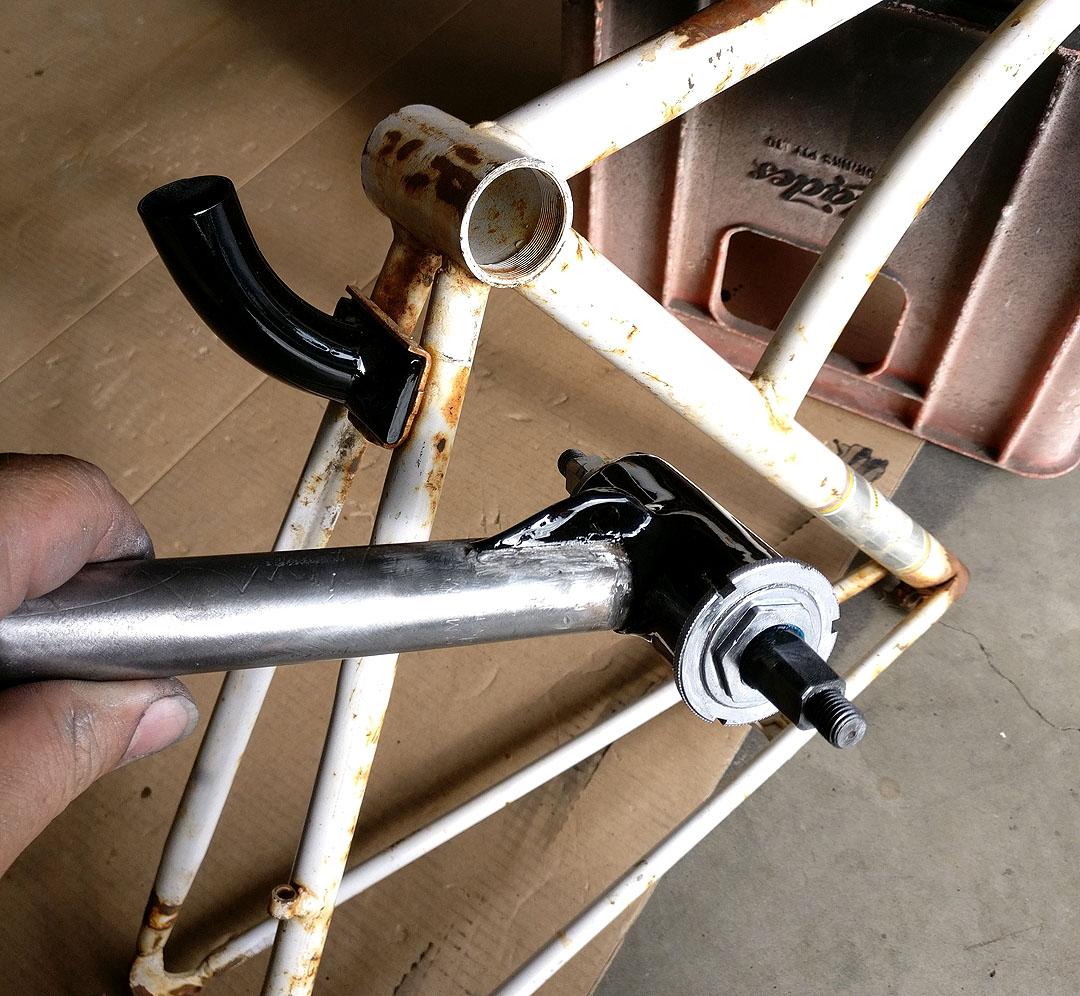 and the dropouts got done 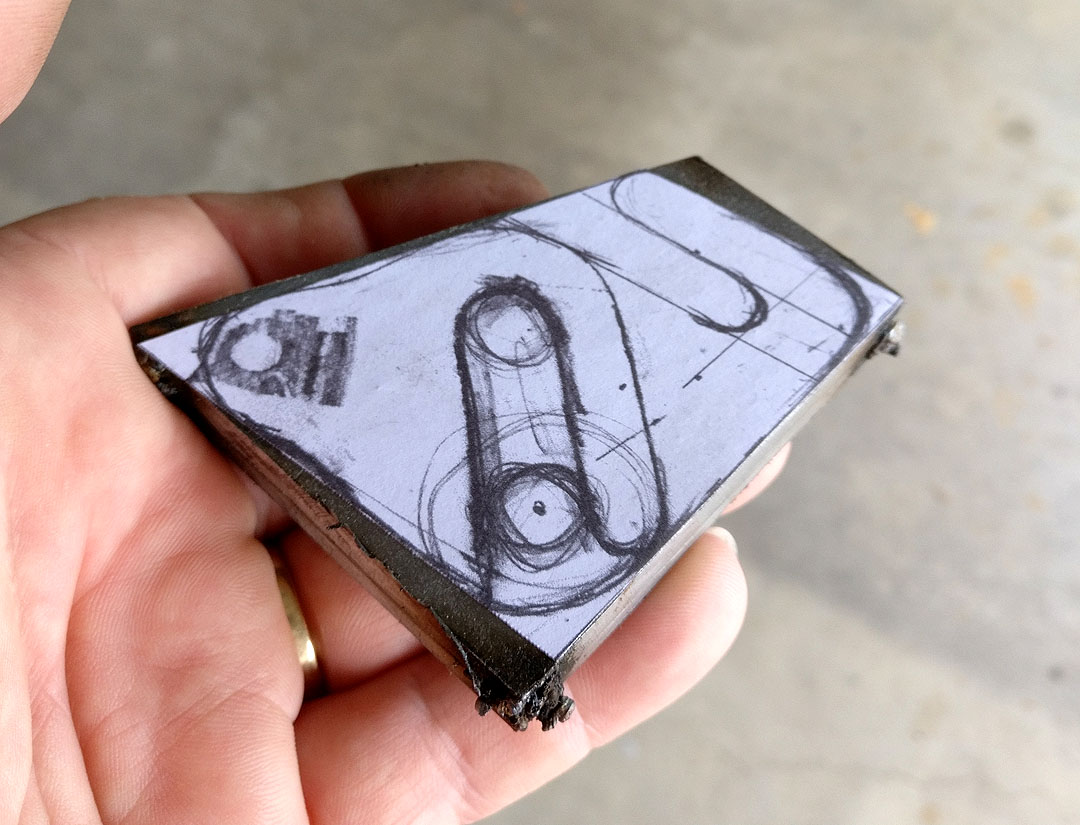 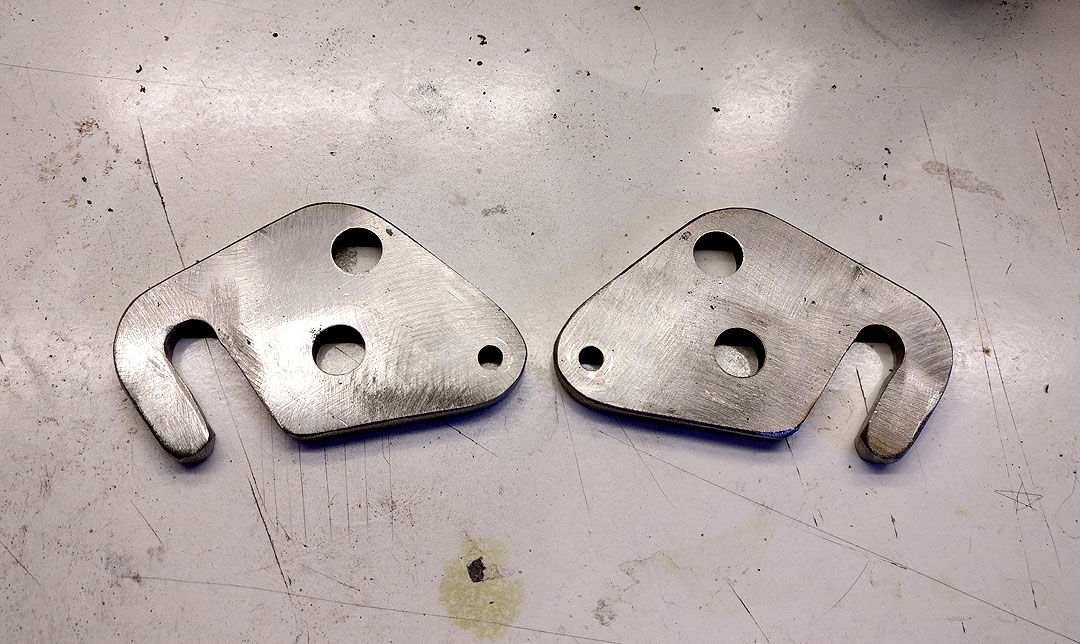 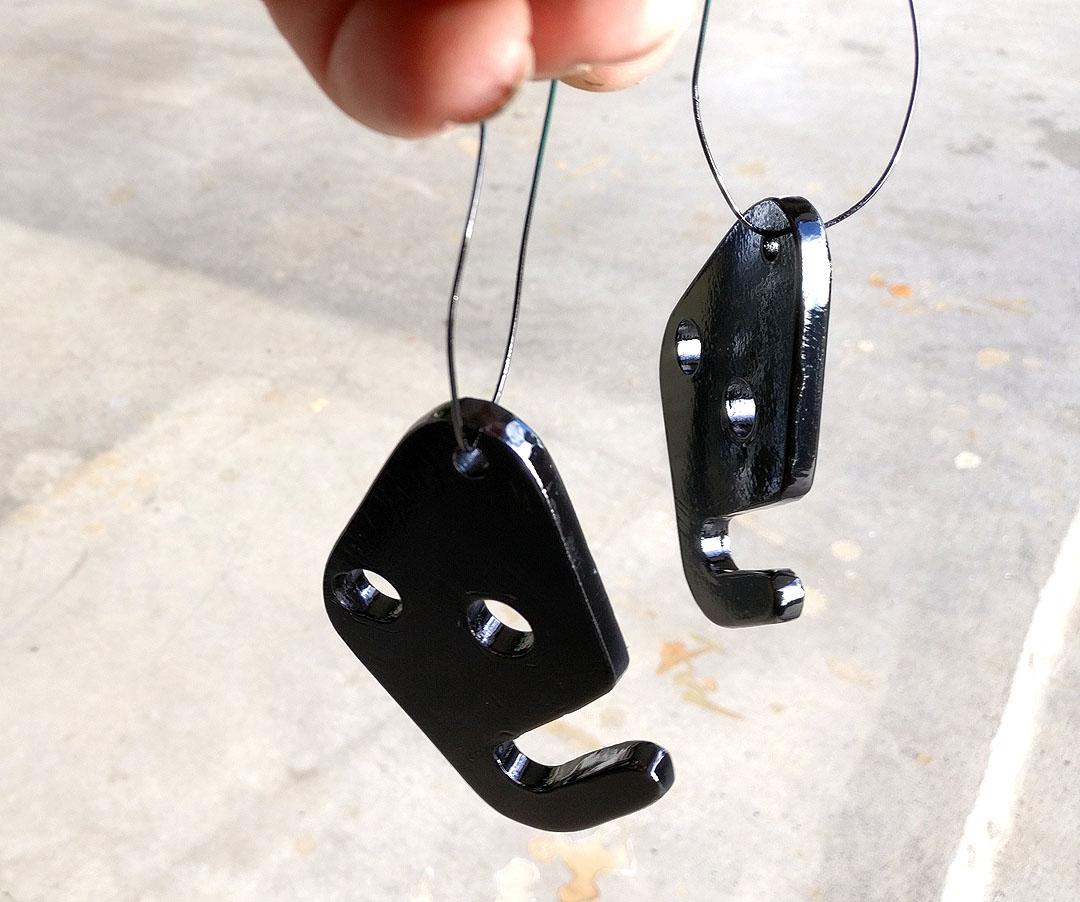 After a loooong day struggling with getting the springer on the ridiculously long steer tube, taking it on a shake-down run and realizing the bottom bracket is wobbling around like a drunken sailor because I had tacked it together but never went back to actually weld it up, and finding that even tho the coaster was new it still needed to be pulled apart for a grease and tighten up - finally at 1AM on the day of the Rat Run, I came back from the a shake-down run and was happy with the bike - mission accomplished, Rat Run here we come!


But...........
7 hours later riding to the train station to get to the city for the Rat Run, I only got 3 miles before the bottom bracket broke loose again - no Rat Run for me

So, this is where it's at now 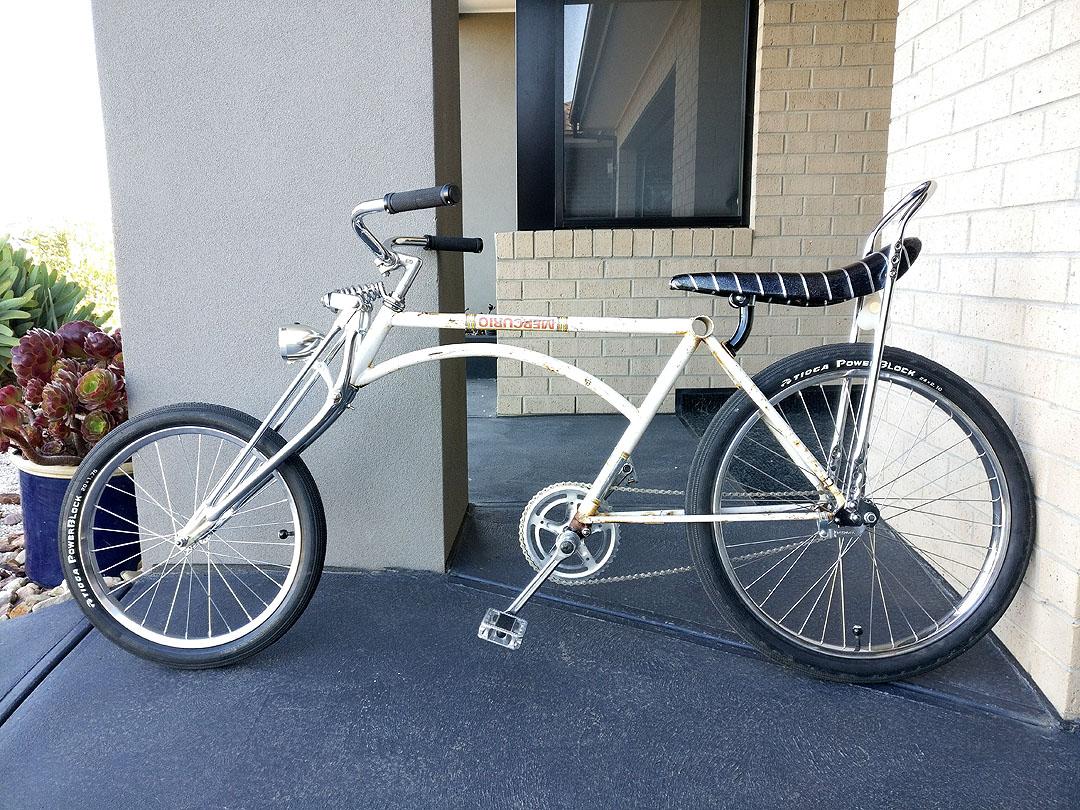 Since there is 4 weeks left of the WBO, I think I'll give up on my bolt-on requirement - my welding skills and little home flux core welder will not be able to make a safe bolt-on bottom bracket, so now the plan is to get another bottom bracket and buttplug it into the frame and give it a nice paintjob.... at least the seat tube and dropouts can still be used.

Love that! Nice curve with the springer into the bottom tube. Looks cool with the level top tube. Great looking flip.

That's cool bro. Looks like a wicked Muscle Bike (I built my first flip for the MBBO) I love your dropouts, that's good work there. My BB's were also able to twist from the torque when they were only held by the seatpost clamp, I plug welded one and pinned the other with a bolt & nut and they never shifted again. So in keeping with your bolt on requirement, drill a bolt hole thru both the outer seat tube and the inner one with the BB lined up. If the hole is exactly the size for the shoulder bolt, you'll have no more shifting. Don't give up! Rat on!

Carl.
Last edited: Mar 2, 2018
Patina: Exposing the integrity of the material's passage thru time.....
Signature removed by the Mods for being too awesome

Ditto to the above comments ^. At first glance, without blowing the picture up, the 'flip' isn't even noticeable. The wheel tire match combo, 'nanner seat mount, curve of the fork into frame; all work!
2019 Builds in RRB Build-Offs:
" Helen Wheels" " Trans-MIG- RaT " " RaTsberry Buffet"

Very cool. The seatpost/kickstand is brilliant. How about some threaded caps for the original bottom bracket so you've got a lil storage compartment or something?

Late update.....
I gave up on the concept of a stock frame flipped using only bolt-on parts and welded in a different bottom bracket instead. 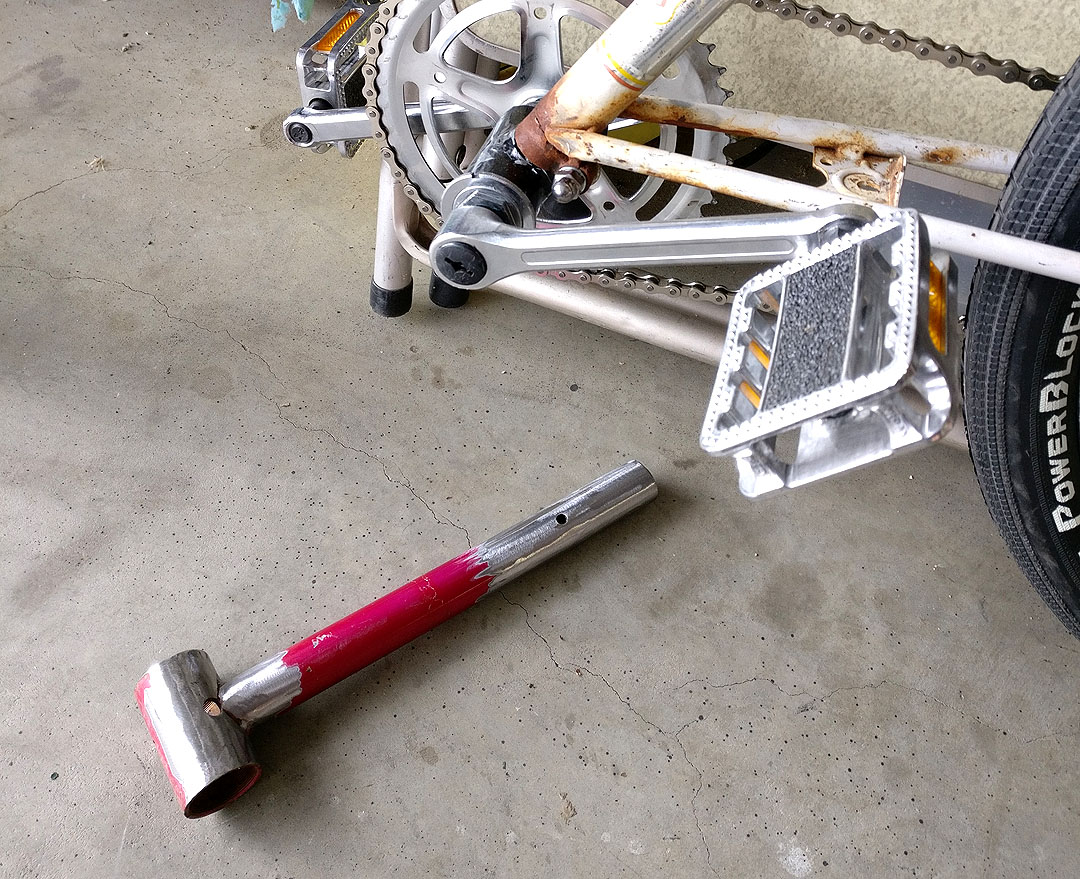 Didn't even have to butt and sleeve it as the old Italian frame has a larger than usual seat tube and that allowed me to fit the new modern mountain bike seat tube into it.... with a little "finessing"

I managed to finish the bike and rode it on the "Stop Fining Healthy Transport protest ride 2018" on march 17th - an annual ride protesting Australia's 25 years of all ages mandatory helmet laws for bike riders and it did stir a bit of interest from a few of the other participants. Many photos were taken on the ride so I hope one will turn up of me riding it.

This evening I'll go out and take a few nice pics of it for the "Finished" post.

Only action shot I have found so far, not a great pic but it is proof of rideability. 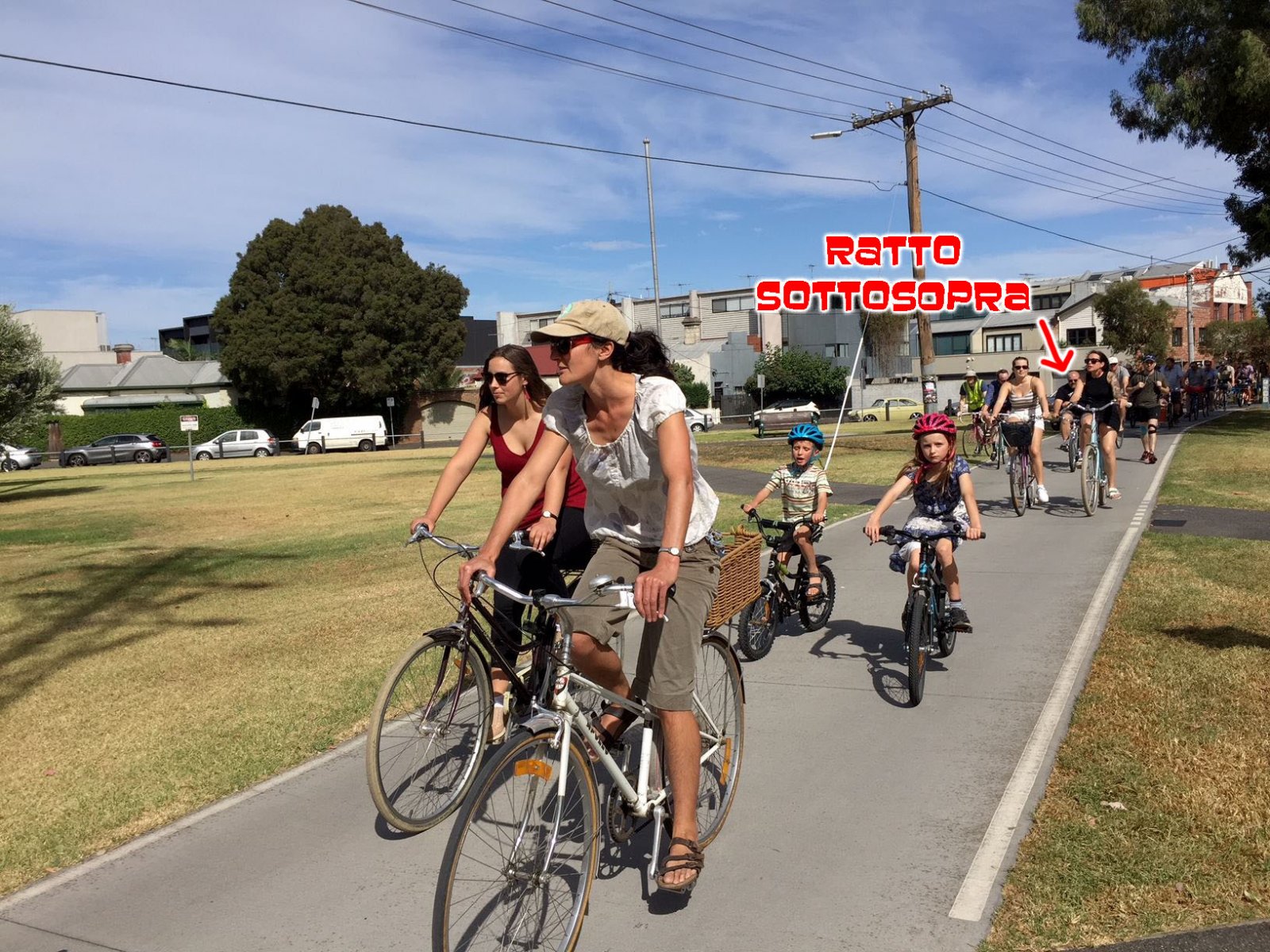 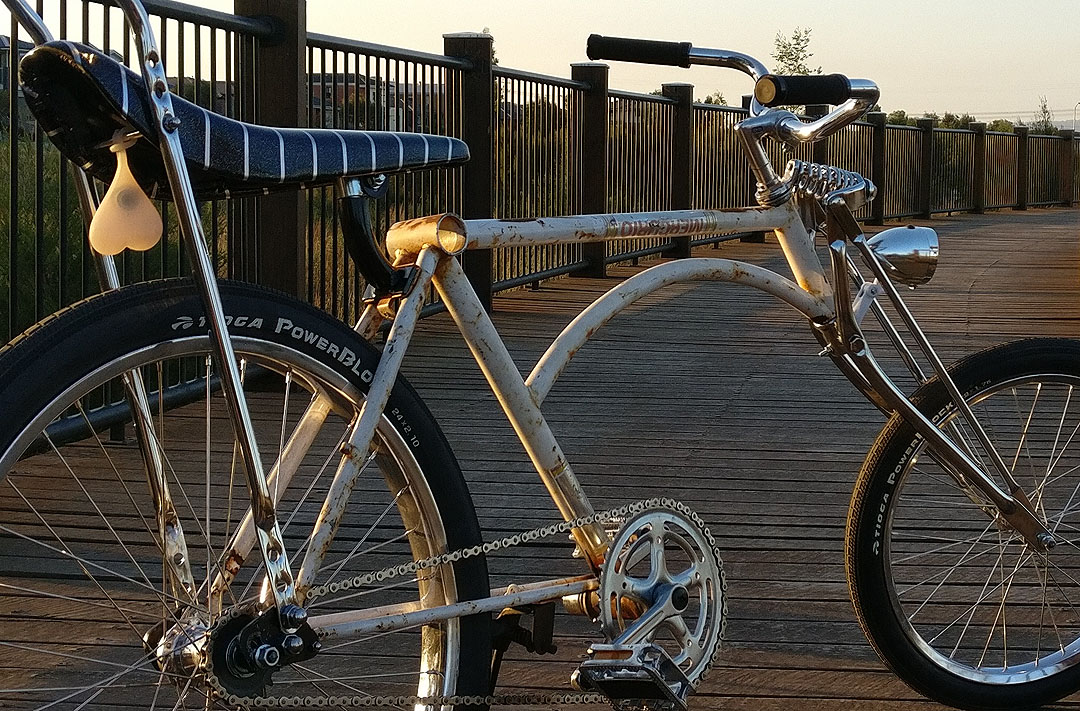