Ok, so its probably the only RRBBO #3 bike from Utah, so I win the state by default. LOL
http://ratrodbikes.com/forum/viewtopic. ... &sk=t&sd=a
There's the link to the build thread if anyone cares to check out the specs on the rotary girder (Tommyboy)
Anyway, here's a quickie about the bike. This is my first "build" if you can call it that. Here's a couple of pics as purchased, "before" pictures when I bought it earlier this month. I innocently went looking for an old beach cruiser bike after making a work trip down to Huntington Beach/Sunset Beach where I went on a bike cruise one night on the beach bike path. After that ride, I had to have a cruiser of my own. Once I bought the bike, I then again, went innocently looking to research exactly what kind of bike I had just bought on bikeforums.com and came across a link to this coolest forum. It appears to be a '59-'61 JC Higgins or Western Flyer frame and springer fork. I was told it has a '52 2 sprocket crank/sprocket set up. It appears to have a non-OG rear rack, no fenders and no chain guard. The ding dong bell is an awesome touch, the kids love it.
BEFORE PIC 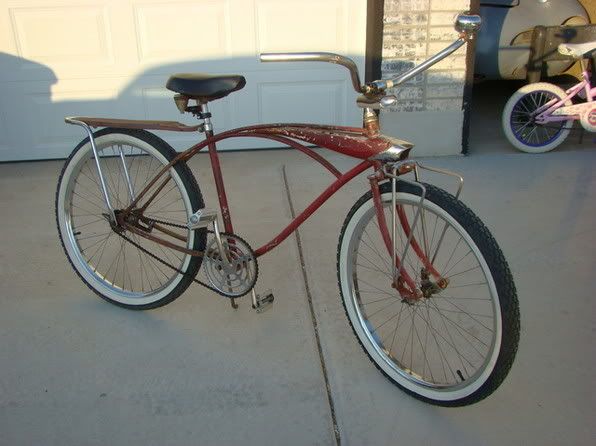 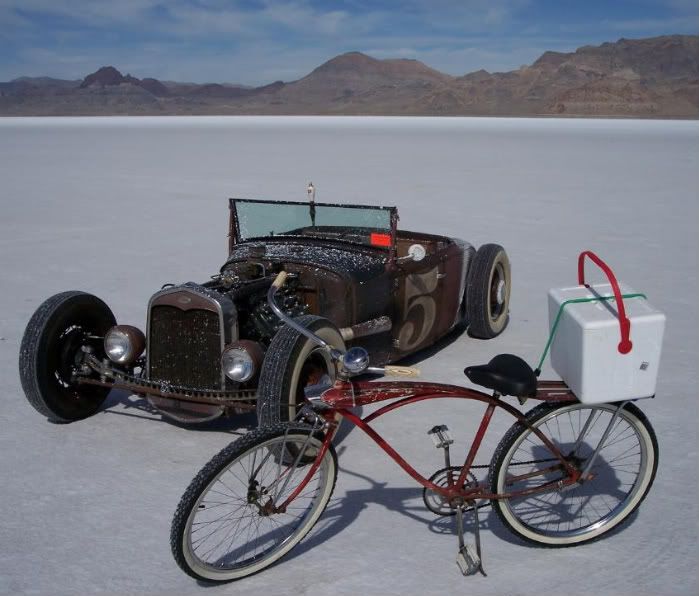 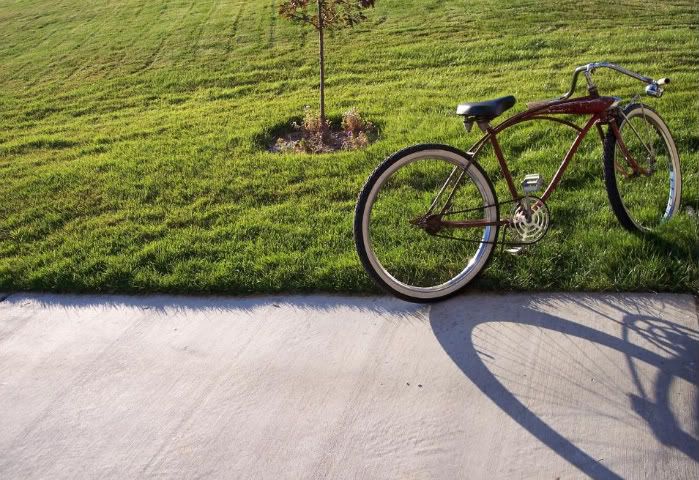 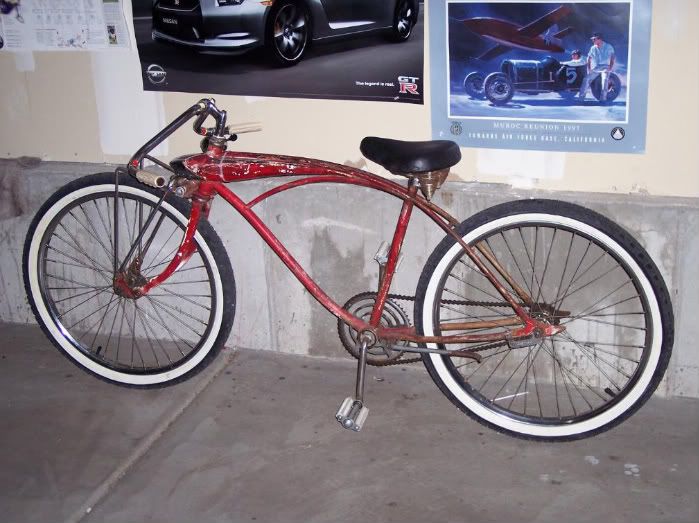 This is no rear rack and with light tank.
AFTER PICS 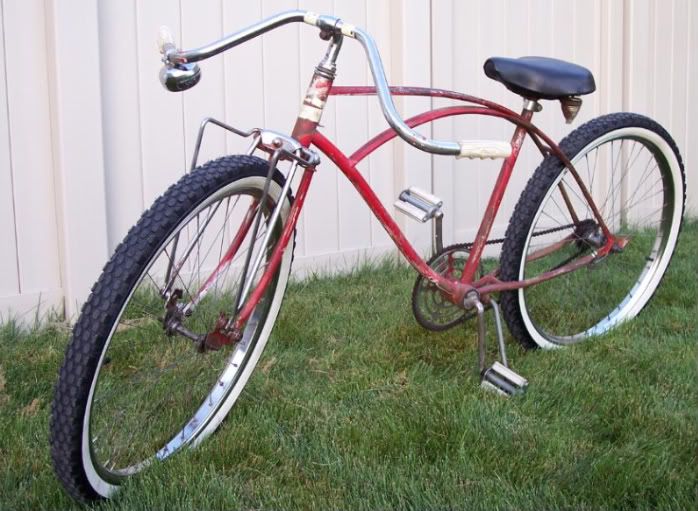 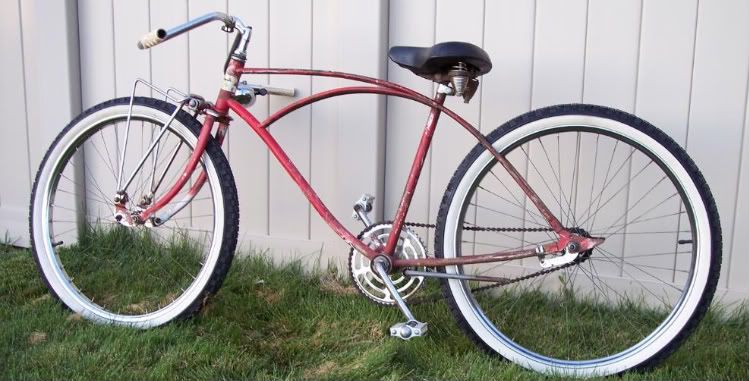 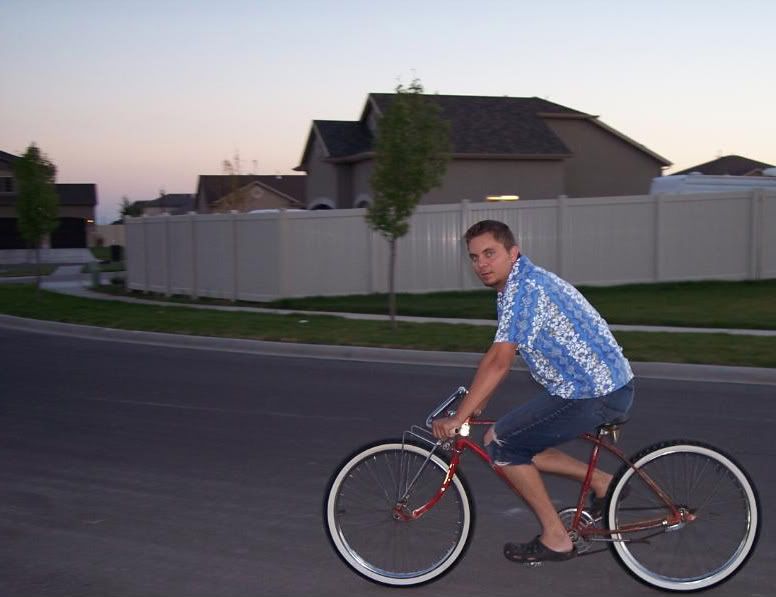 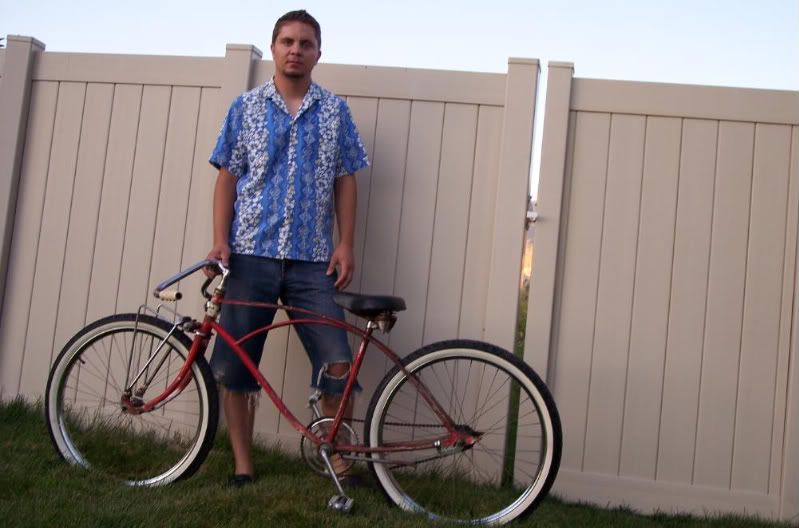 So, the final configuration includes Rickster vintage Schwinn white grips, flipped handlebars, flipped springer fork, removed light tank, removed rear luggage rack. After seeing other builds on this site, I couldn't leave well-enough alone right. I had to mod it, rod it and ride it! (edit: and mod it again).
It went from Salt Cruiser to Salt Flyer, too bad I didn't have it all done up like this when I was on the Salt Flats last week. The bike is much lighter without the light tank and rack. I'll probably start refinishing those components. But, I really like the racer bike look right now. I don't know if I could put the tank back on it. Maybe I'll save it for later when I can build another one (RRBBO #4?) without a tank. We'll see. For now, this has been a blast. Thanks Rickster and others who gave me ideas and parts.
Chris "hechtrod" Hecht
ps, so I removed the skinny front tire. After riding it (it was fast) it lost its character and "feel". The big meat on front fits the bike much better. 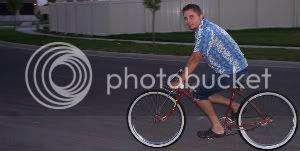 The "Salt Flyer" RRBBO #3 entry
"Don't be jealous that I've been posting on ratrodbikes.com all day"
F

i was in bonneville too i remember that car!!! 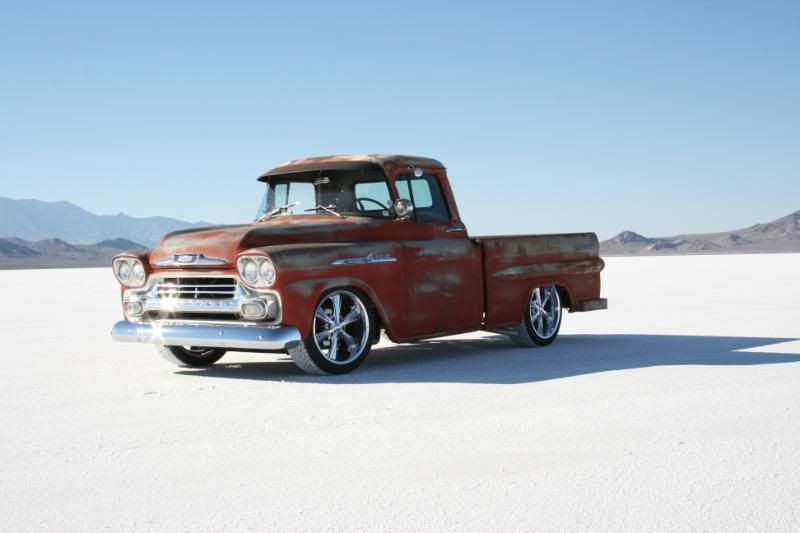 Nice work man. Oh if you need to sell that tank, let me know... :wink:

Nice truck! I think I remember seeing that there. So many cars at Speed Week!

The "Salt Flyer" RRBBO #3 entry
"Don't be jealous that I've been posting on ratrodbikes.com all day"

Wish I lived out that way, love to run my truck on the salt. Super nice bike man.
"That tire ain't flat, i'm just heavy."

Nice ride, that's all I'm going to say since I am crazy jealous about the fact that you had the chance to do a photo shoot at Bonneville...just kidding. Very well done.
Gerry

Yeah, that is one bonus of living it ute. What a cool place! We've got Bonneville Speedway and now Miller Motorsports park, 2006 Racing Facility of the Year in its first year. Anyway, hopefully this is the first bike of many I can build and ride. thanks