Rating - 0%
0   0   0
The wheel had some imperfections that I just was not going to remove. I didn’t want to weaken anything, but I did dress up the crappy trim work on the weld.

I buffed on the hoop for four hours, after wiping the last bits of paint off with scotch Brite and a little go with some 220 in the rough spots. About 5 hours total buffing up this hoop. 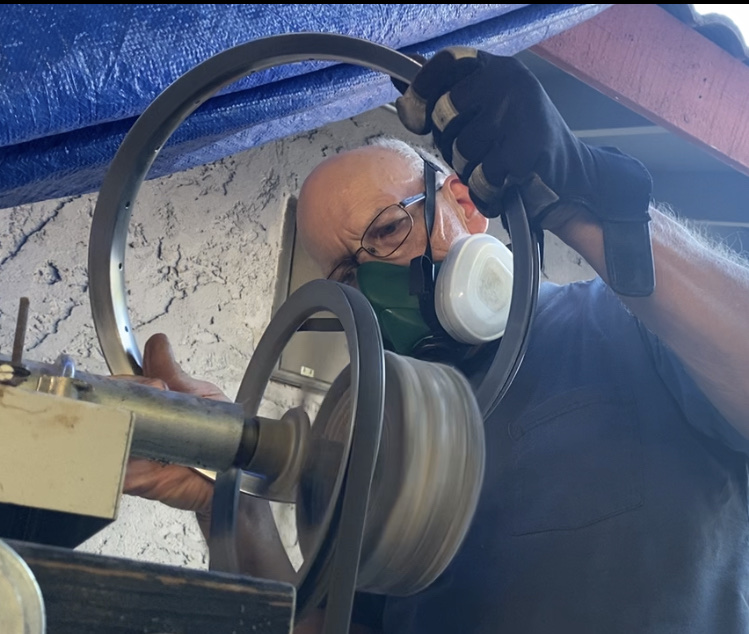 Anyhow it is ready to be decontaminated with solvent and clearcoated tomorrow morning. I can’t paint when I’m this tired. I have to really focus as I am laying paint down. 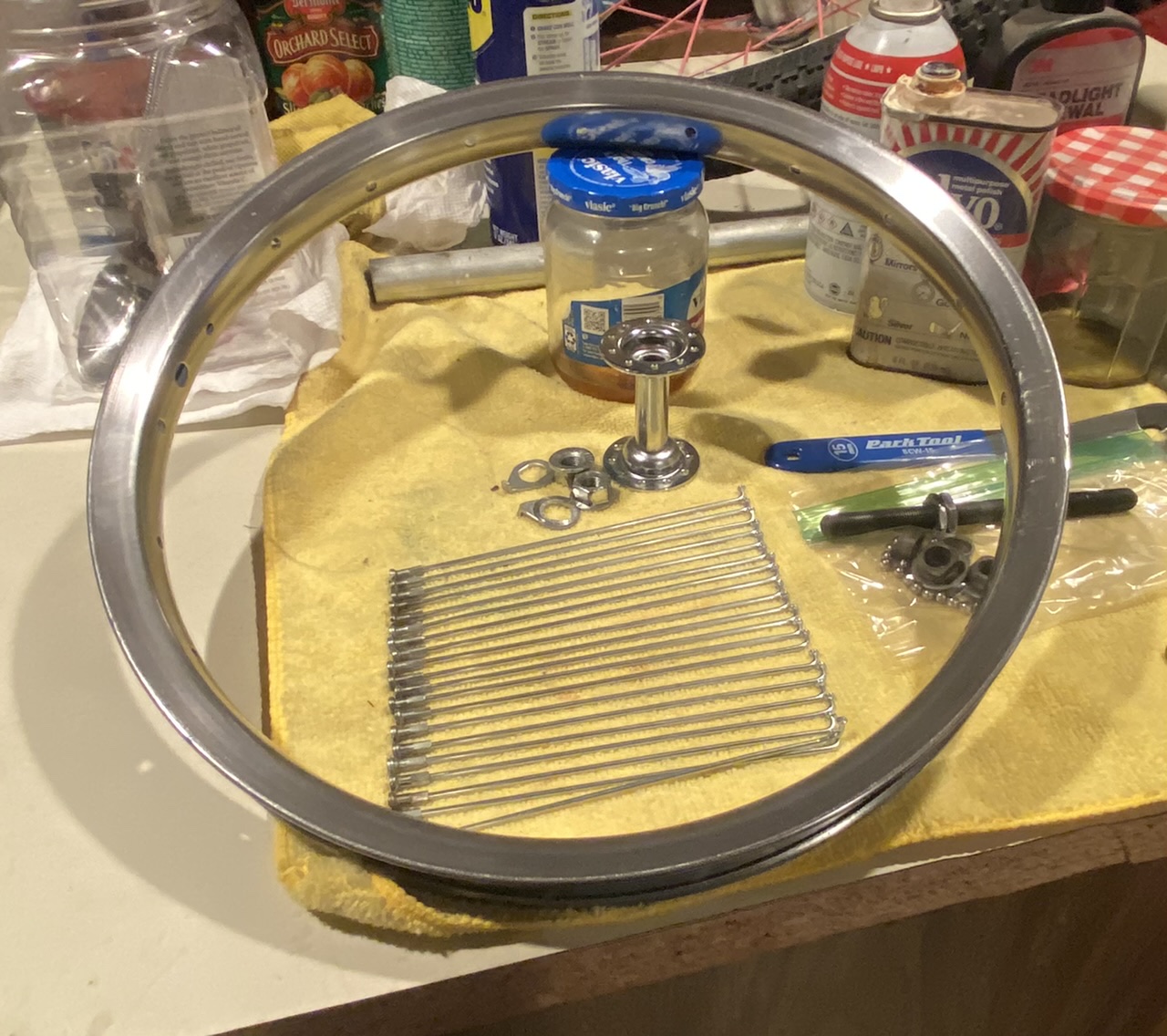 People say that all the work is in the preparation, but you really need to plan your moves when you paint, and focus on how it flashes. There’s usually some set up before I can do a good job on something.

Since I am just going to clearcoat everything I might assemble the wheel before I shoot the rim. Otherwise I will have to wait a couple days for the paint to harden so I can cover it with tape.

There’s no way I can lace this wheel without scratching it. It’s got to be wrapped up before I lace it.

Rating - 0%
0   0   0
Well I took a good look at that hoop today, and decided it needed some more dress up with the 220. I gave it a run against the scotch bright wheel & another good buffing. That all took me about two hours, and it is looking pretty spiffy. 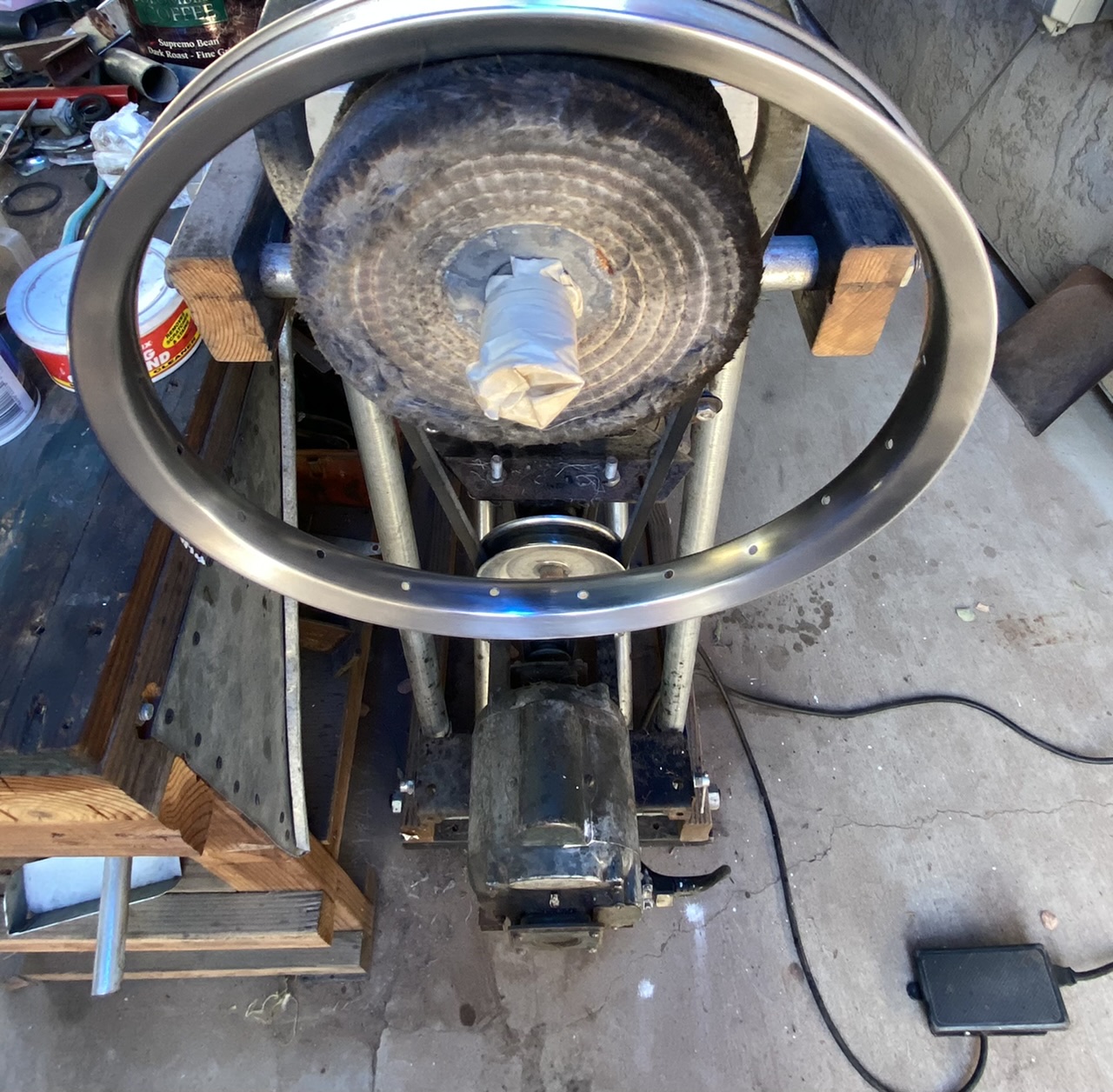 I haven’t wiped it off yet.

I keep telling myself that my grandkids are just gonna throw this about at the playground. I should not try to take out every imperfection. Perfect is the enemy of Good Enough, right?

This baby is going to shine & I’m gonna give the spokes a polish as well.

Rating - 0%
0   0   0
I decided to assemble and balance everything before paint, because I didn’t want to wait for curing to finish this wheel. 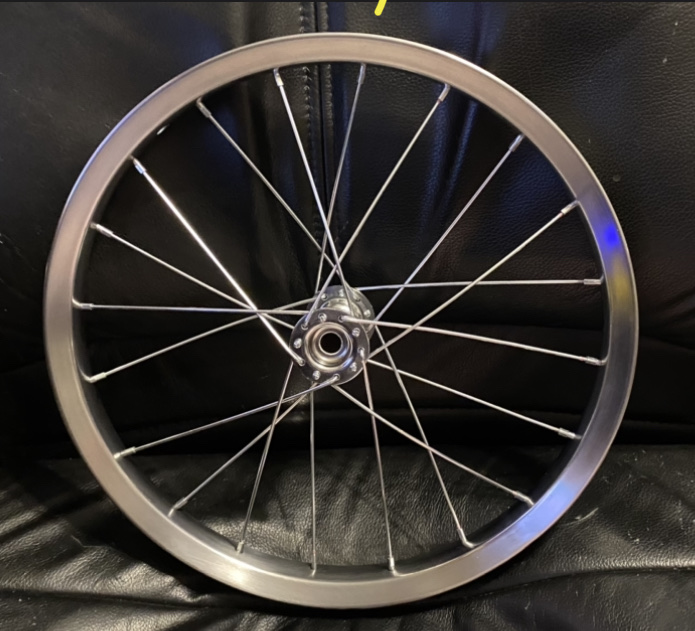 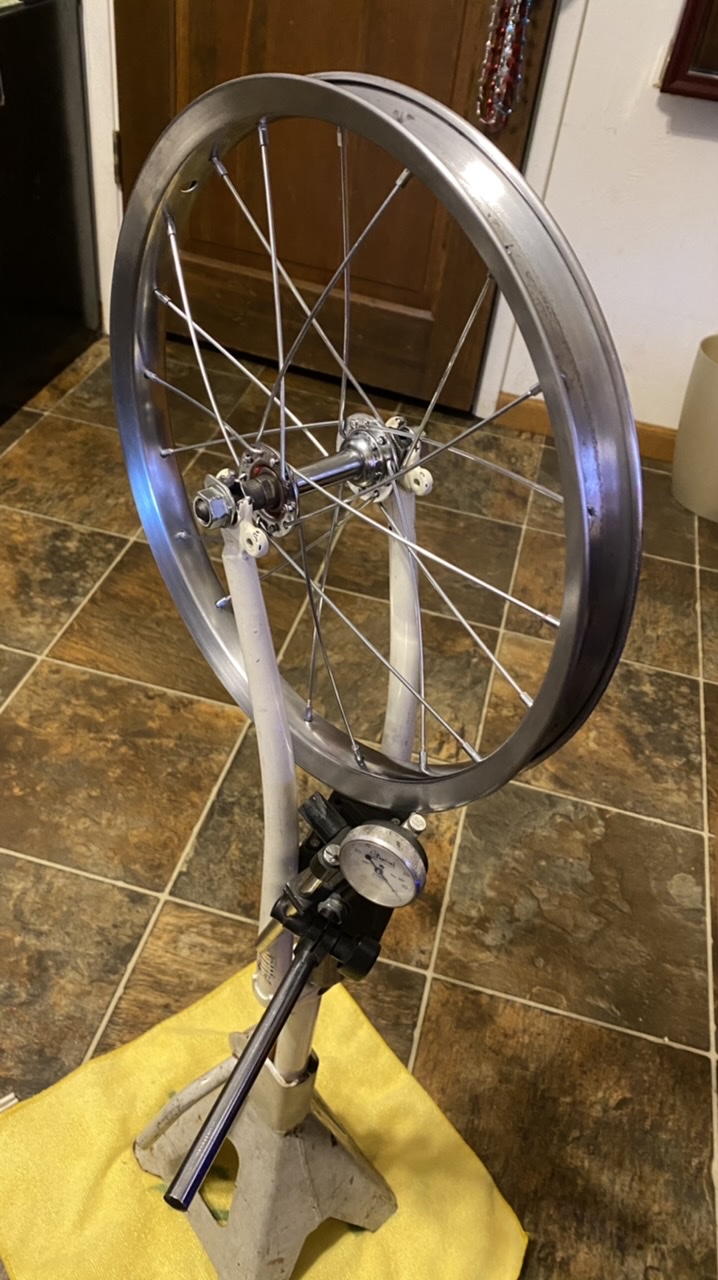 So that’s just the centurion fork and the bottom of a jackstand and a couple of wooden wedges. I have a magnetic indicator base and a dial indicator from Harbor freight. I’ve had that 30 years. 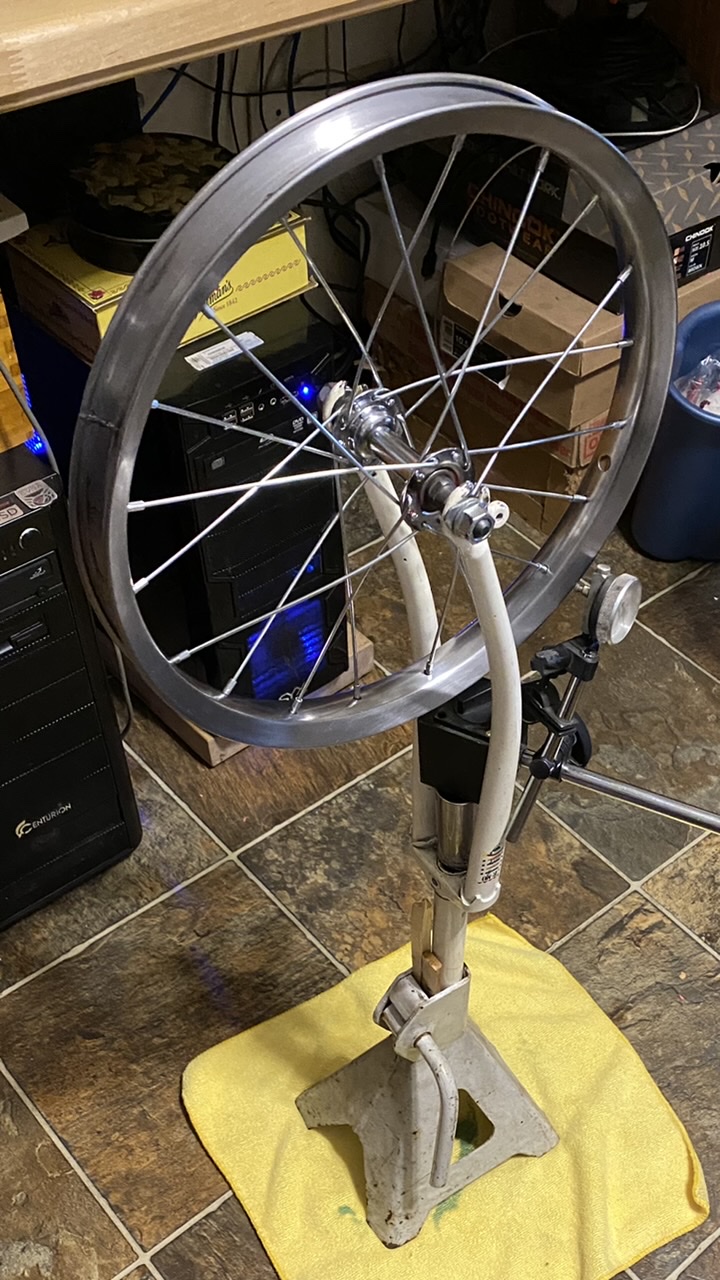 Rating - 0%
0   0   0
I still have not done an alloy wheel yet, but I did do another set of spokes plus a steel sprocket and an aluminum one as well.

This is after two days in the shallow pan of brake fluid in the hot sun.. 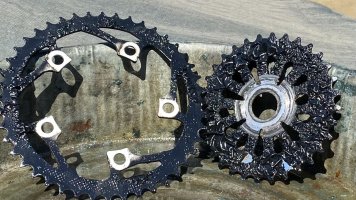 All the spray can paint just wrinkled up and fell right off but I had to scrub the factory paint along with the Scotchbrite. I sprayed it off with solvent here. 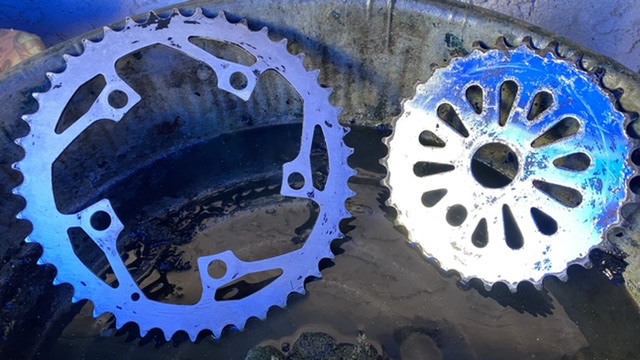 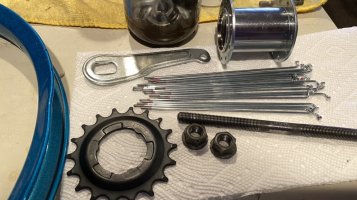 You can see there’s a big dent and some rust in this hoop. 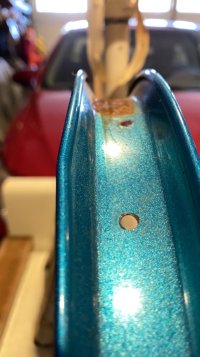 I’m not sure what I’ll do with it yet.

The blue paint was not very damaged, but it was just not a very good paint job to begin with.

It had metalflake paint that had been shot without good agitation, and the flake was almost clumpy. It had to go.

Instead of filling a pan with a gallon of brake fluid I didn’t have, I just put this hoop in a white plastic trash bag and filled the bag with brake fluid.

I propped the bag up in the middle so it only took about a pint to soak this hoop thoroughly.

I let it go 24 hours outdoors in the hot sun. Of course it cooled down somewhat overnight but my infrared thermometer tells me that the metal pan got it to 145°F in the sun.

After only 22 hours wrapped in plastic, the paint was lifting significantly over a large percentage of the wheel. But it wasn’t as loose, and a mild rubbing with scotch bright revealed that 80% of the paint was still there. 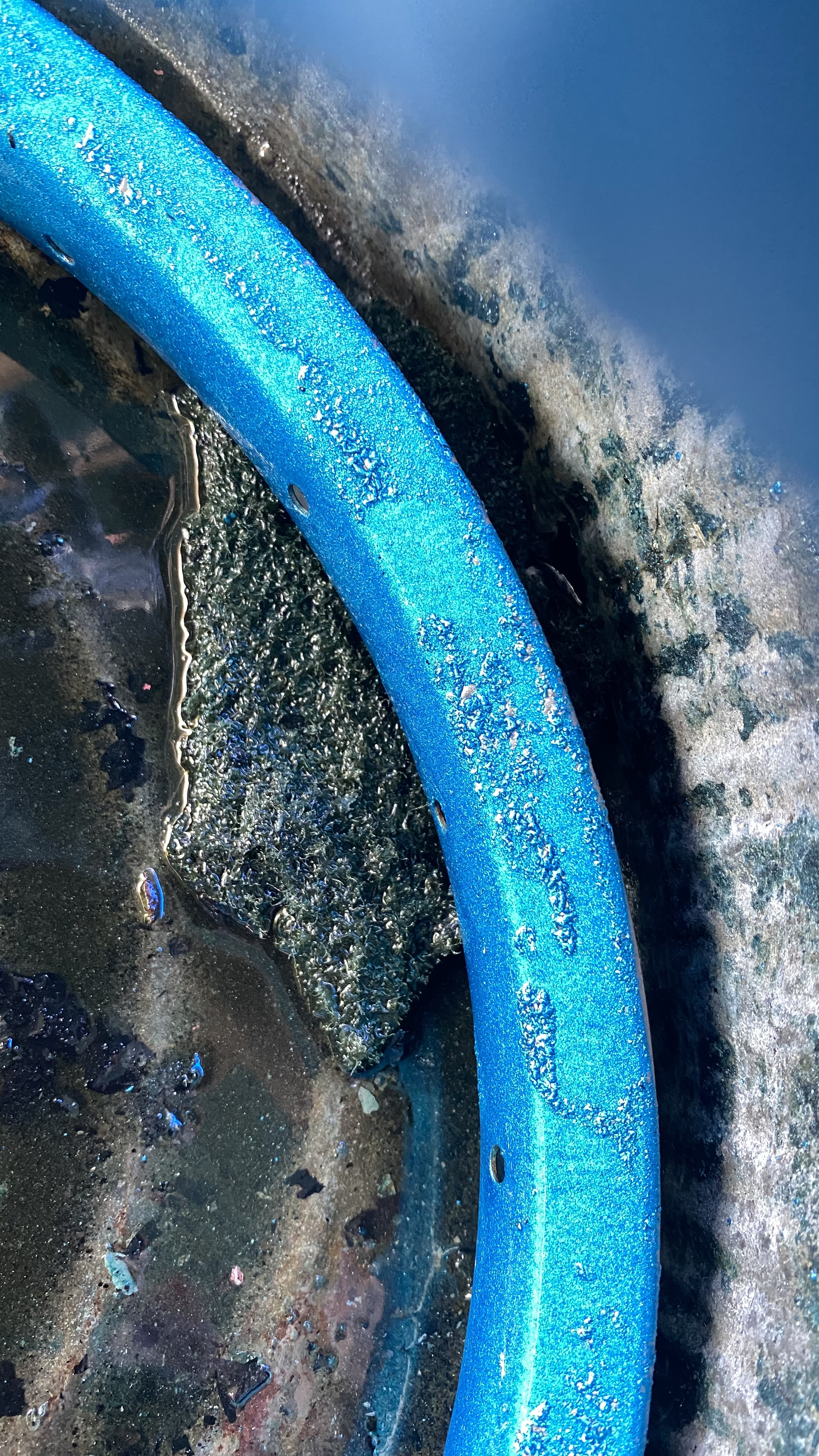 I was going to re-bag and put it back in the sun for another day, but I wanted this one done. 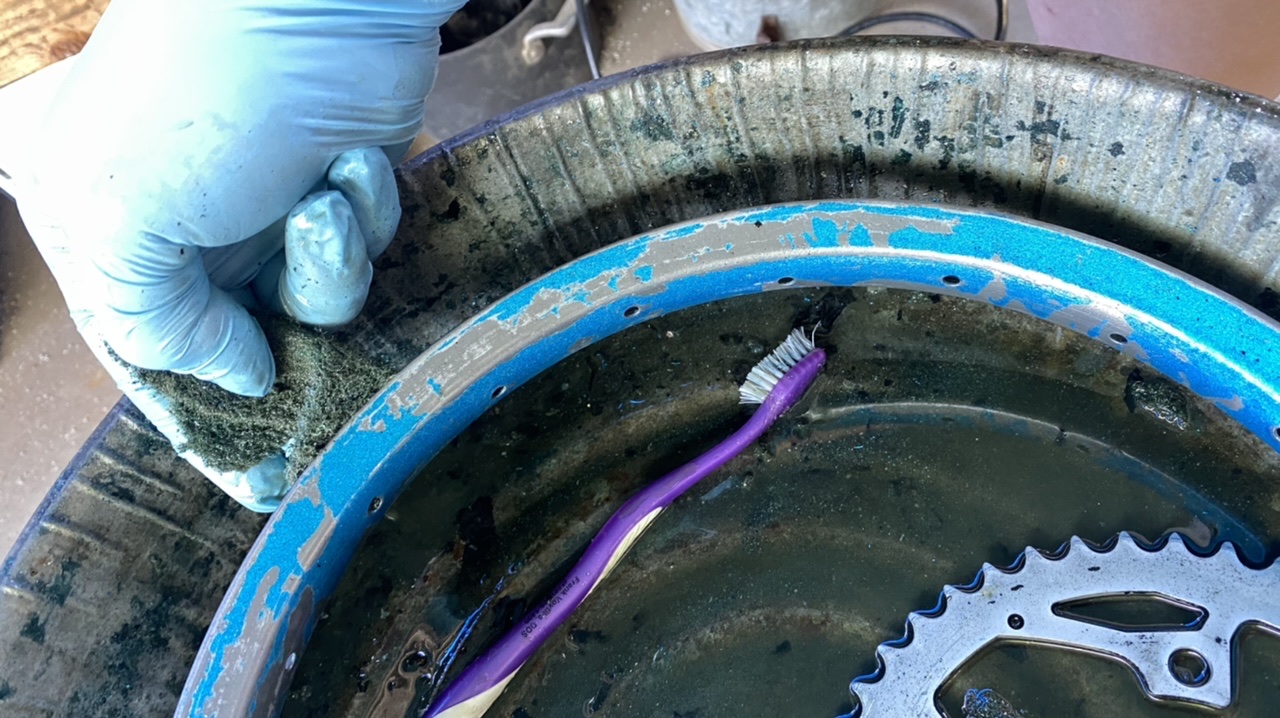 I heated the wheel up with a Wagner heat gun until the fluid started to steam. Then it started popping up & coming right off with a toothbrush.

Once you get the fluid up to 212 F (or 100°C) the water starts boiling out of the brake fluid. It doesn’t even stink. Because it’s basically just water vapor. The fluid doesn’t boil until you get way over 350.

The great bane of brake systems is that the fluid is hygroscopic and it loves to suck up water and hold onto it.

I was boiling it out of fluid that was already getting in & under the paint. This caused to paint to pop off some more.

Repeated wiping’s with scotch bright and scalding hot brake fluid took the rest of the paint off, and the whole business took about 30 minutes to get it clean. The air temperature under my awning by then was 100°F. I was dying to go work in my garage which was only about 80, but I didn’t dare heat that stuff up indoors.

But it doesn’t seem to emit vapors like aromatic hydrocarbons do. Those things boil off at room temperature.

It still needs to get buffed out if I’m gonna clearcoat it but if I decide to just paint it then it will need a primer coat. I do have some cans of self-etching spray paint. It works OK.

Dictation on the iPhone is still far from perfect. This is what it thought I said.

I knocked it out with a wooden block & rubber hammer. I showed this in the “Lengthy insanity” thread. 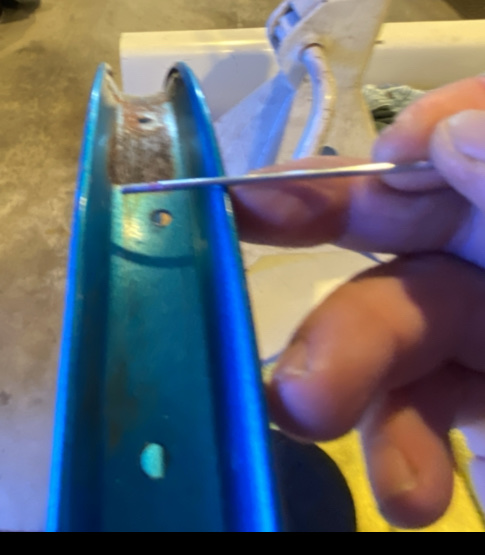 Rating - 0%
0   0   0
It turns out that the hoop was still kind of wavy from the rubber hammer treatment, so after I stripped it, I grabbed the tap hammer and started tinkering it down.

By the time that it is flattened and metal finished I will have way too many hours in this POS.

But this is kind of a practice piece. After I’m done tinkering I will buff it out and shoot it with clear.

Rating - 0%
0   0   0
It's for the greater good. You are giving us a good tutorial on the process. Thanks.
There's nothing foolproof because fools are so ingenious

Rating - 0%
0   0   0
Yep, it was like a real science experiment, and now I wish that I still actually had some old brake fluid

Because I didn’t wanna pay the fee it’s been collecting in jars on my shelf for years.

Before they discovered a way to make them profitable, they used to charge you $7 here to dispose of a used tire. There were legends of a canyon in Southern California completely filled to the brim with used tires.

Rating - 0%
0   0   0
Ok I still haven’t stripped the alloy wheel, but yesterday I put out some stinkray triple trees and an alloy stem clamp that is beat to heck and has 10 coats of black paint.

It looks like some kid put his bike back together out on the trail with a rock, because he didn’t have any tools when his handlebars came off.

So, I used the plastic bag method again to reduce the quantity of brake fluid needed, but I still used nearly a quart.

A quart of new brake fluid here costs at least $10 plus tax.

My parts all soaked in the hot sun yesterday, and once it comes up to temperature here today, I will take the parts out and scrub them off.

Rating - 0%
0   0   0
Hmmm… Amazingly there is no hot sun today. It is cloudy and raining in the desert, which is a miracle that will elicit much joy from every grower in the valley.

The Valley grows a fourth of US food. Rain is gold.

Rating - 0%
0   0   0
I left those parts soak for five days and the result is that all of the spray can paint fell off immediately and the factory green paint is softening the silver paint came off, 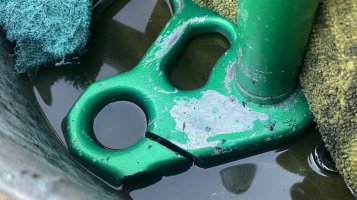 But the factory stinkray black paint is not coming off easily.

I wrapped up the aluminum Trek frame in rags soaked with brake fluid and put it in the hot sun.

After one day the paint is starting to fall off. 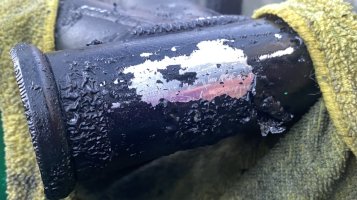 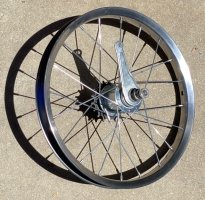 This will probably wind up as a garden ornament or something, because it’s not gonna withstand much.

I decided to continue soaking the other parts. The paint is coming off of them in some cases but not others. Today is day six so we will see how they are doing later. I might decide to use the heat gun again and speed up the process.

Rating - 0%
0   0   0
I still haven’t stripped any aluminum rims yet, but the Batman-black aluminum framed Trek is starting to glow in the sun as that brake fluid melts the paint off. 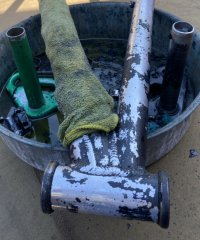 I forgot about it for over a week, and just left it out there soaking with rags and brake fluid.

I had intended to do some welding on the forks for the sting gray project but I don’t know if that’s going to happen yet.

Anyhow those triple trees are still soaking in brake fluid and the factory baked black paint is not coming off easily.

I think they must use a one step oven baked phosphate etching black, that covers up minor rust.

The paint fell off of that aluminum frame when I just rubbed it with a little scrap of cardboard. In order to get the paint off those trees I had to scrape it with a piece of hard plastic.

Here again, the spray can paint fell right off, revealing the factory mongoose logos from underneath, which it did not remove. 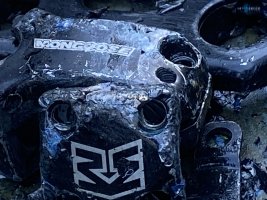 Rating - 0%
0   0   0
Well I finally got back to these other distractions that were preventing me from doing the cleanup of my boat yard (and thus delayed my Project bike.) 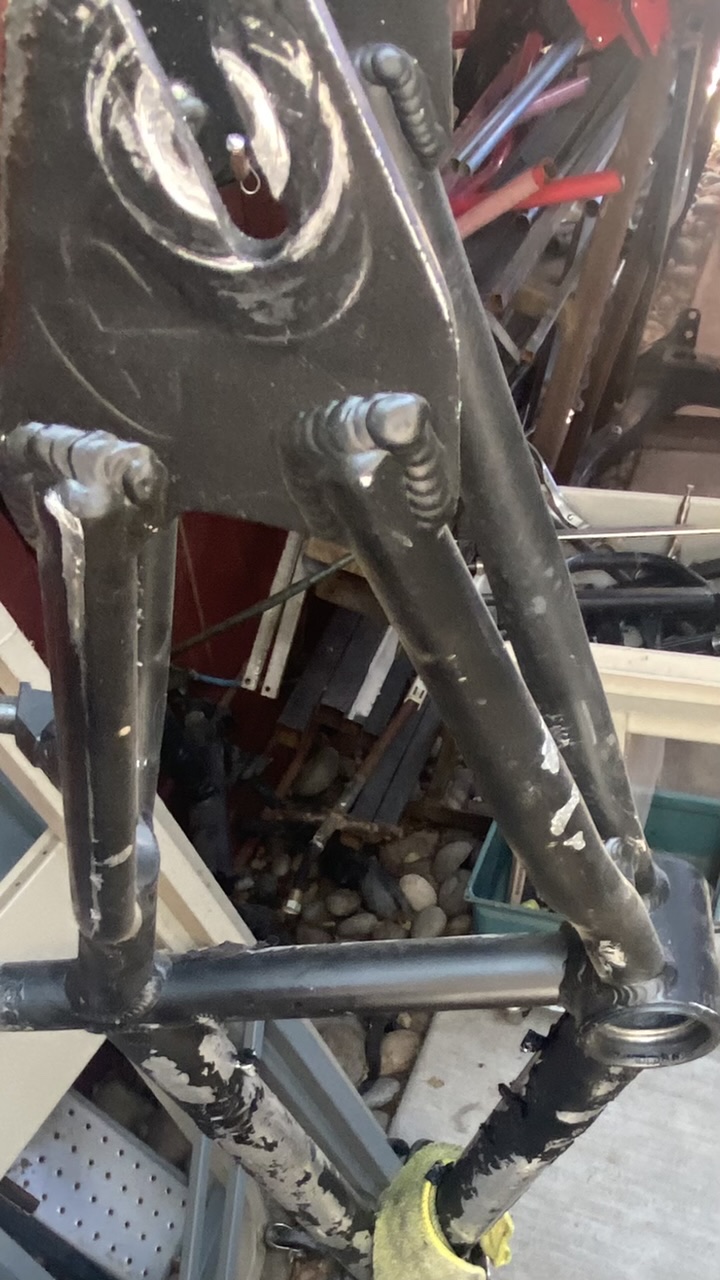 I still haven’t started any hoop yet but I have had this frame in the sun for weeks now. I threw a rag over and soaked that with brake fluid. The paint was already falling off but I had to work on the BBO project. 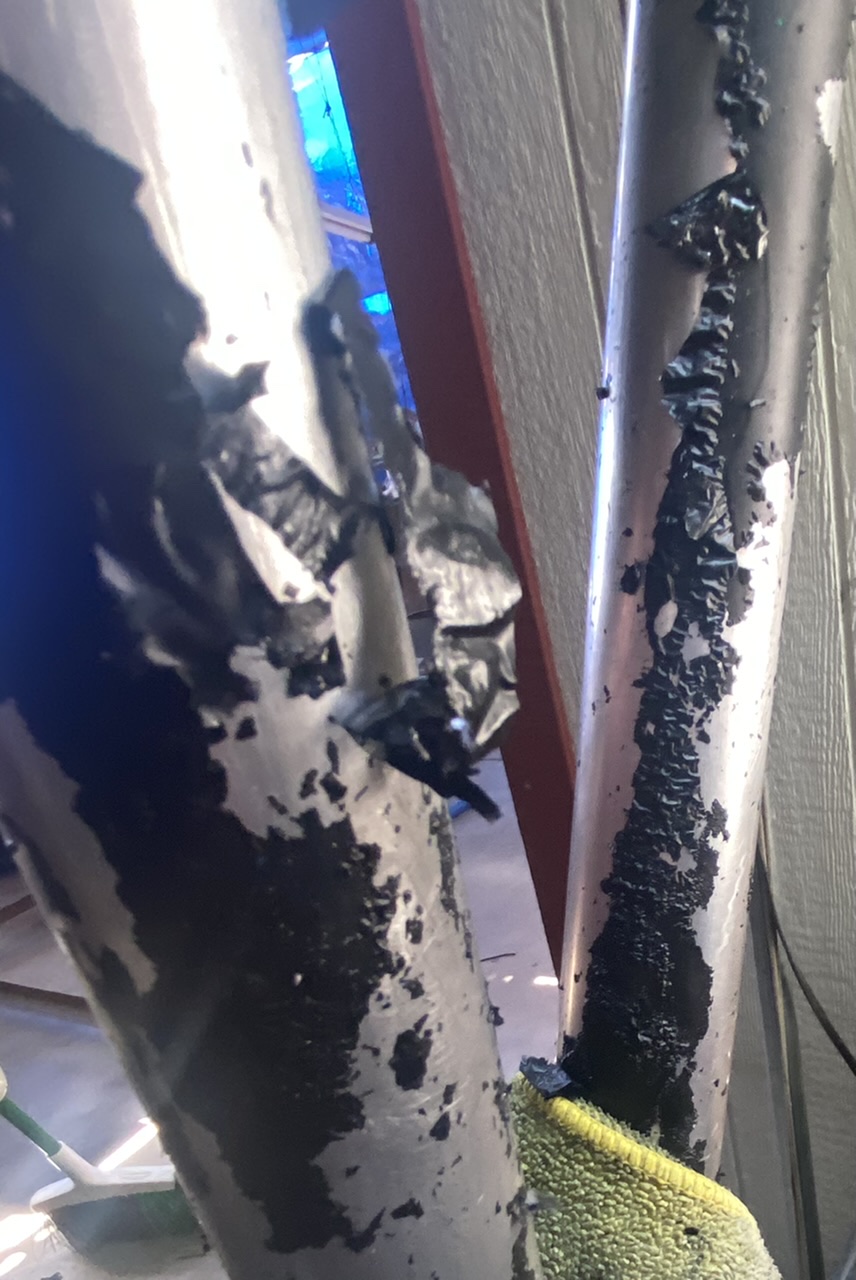 Today I hung it up in the sun and wiped off most of the loose paint with a rag revealing a fairly clean aluminum downtube and top tube.

Some of it had re-solidified, so I shot some solvent on it & hit it with a plastic scraper. It knocked off everything pronto.

I have plans for this little frame if it turns out to not have any cracks, and so far the welding and everything are looking quite nice. The bearing cups are surely trash. The bottom bracket was semi-ball-less.

Hopefully I can get a sealed cartridge bottom end for this.