CWC no name yet

Here is my entry for the MBBO2013, I'm pretty late but hey, better late than never.
I picked up this 1949 Cleveland Welding bike a few months ago, it was all complete except for the seat. When I bought it on the bay, I was under the impression that it was going to be a 20'', but upon picking it up, I discovered that it was actually a 24". I was actually more excited when I realized that. 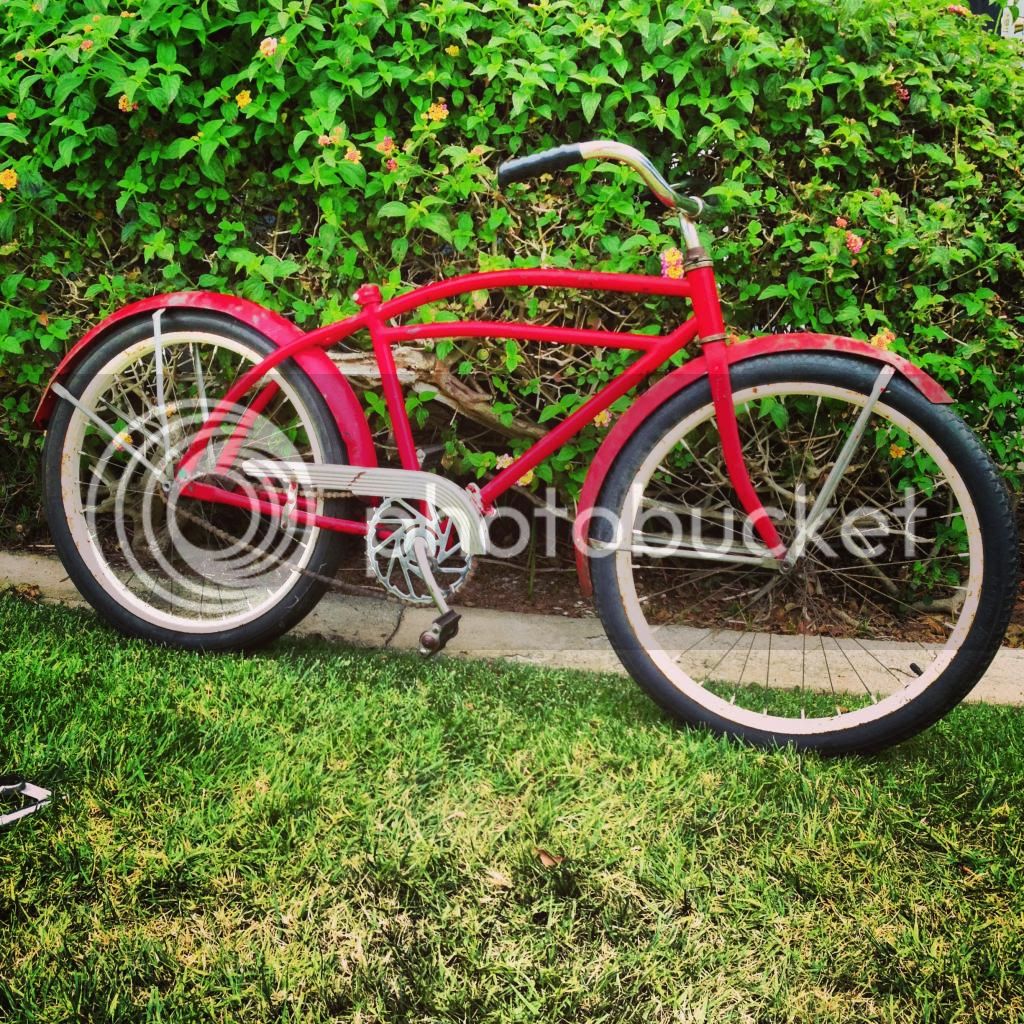 I had stumbled across a thread in Bike Talk that was discussing pig bikes, the idea of a skiptoothed bike with a nanner and apes had been driving me nuts, it was just too cool looking, and all though I didn't have a 20", I decided to go that route with this bike anyway.

The red paint in the picture above photographed a lot better than what the bike looked like in person, It was house paint, about 5 coats of different colors, lol, there were drips and runs everywhere. The wheels were the same, coat after coat of brushed on house paint. I strippped off all those layers to discover what looked like OG paint, it was a burgendy and white color. Oh well, OG paint bores me anyway.

I decided to basically use everything on the bike except for the fork ad fenders, I bought at 24'' springer, and some chrome fenders, I had no idead what actuall direction to take with the color scheme, here is my first mock up after primer.

I hate seat posts showing if they don't have too, so this seat will be all the way down touching the fender! Those of you who follow me on instagram know that I have shot a few coats of paint on this already, but do to an accident in the garage, I'm in the process of repainting the frame.

The basic color scheme is going to be silver, black, and red. I pretty much have all the pieces, i just need to get to finishing paint! I'm dragging.

Here is a rough pic/mock up of the color scheme, I'm going to go with a black on black wheel set. 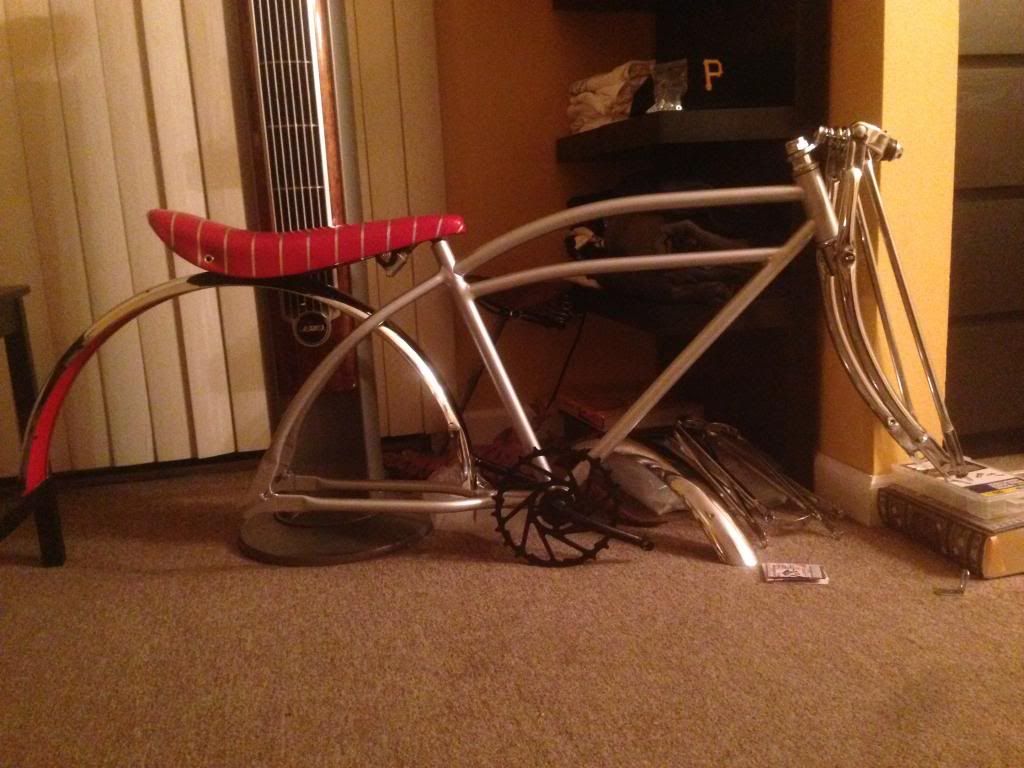 I'm going to be two tonng the frame with red scallops. I hope I can pull them off OK.

Here is a shot of the underside of my fenders, I painted them an apple red, just a cool little detail ...

Nice! That is going to be one cool and nice riding bike!
Love the red paint under the fenders, nice touch!

And.... here is what my frame looks like right now, it fell off of my workbench, then an open bottle of acetone that the frame knocked down dripped emptied itself on the front half of the frame. The paint turned into puddy basically, it was rubbery and I could not sand it. Oh well.

Ouch! What are you going to do?

A couple of suggestions:

Make a tank. My friend TwoSpot made a great one recently with wood. Here's his build: viewtopic.php?f=21&t=67728
Sensor has made tanks from metal that were awesome, but I don't have a link. Or you could just fill in the space with a filler. Wood, plastic, I used metal on Blackjack: viewtopic.php?f=21&t=66708

Slick for the back. A Jerald 24" would be cheapest and easiest.

Skinny for the front. 'nuff said.


Man, I can't wait to see this one done!
Visit my build gallery: Crash's Build Page

Dang dude that's lookin slick! Shame about the acetone, but it sure is coming out killer! :shock:
Terry

Here is a shot of the underside of my fenders, I painted them an apple red, just a cool little detail ...

Love the red in the wheelwell!


LukeTheJoker said:
Ouch! What are you going to do?

Ugh, repaint.
My feedback was higher than anyone else's on this website, trust me!!!


HuffDaddy said:
Here is a shot of the underside of my fenders, I painted them an apple red, just a cool little detail ...

Love the red in the wheelwell![/quote]

Thanks man!!
My feedback was higher than anyone else's on this website, trust me!!!

So I laid down some new silver paint today, I went with Rustoleum Metallic Silver, I'll be using rustoleum painters touch Apple Red to do my scallops. I have to paint my spokes still, and then I can relace my wheels. I decided to repaint my crank and chain ring, as well as the wheel hoops in FLAT black, instead of the Satin. It had a little too much gloss for my liking.

here is a close up shot of the new silver, 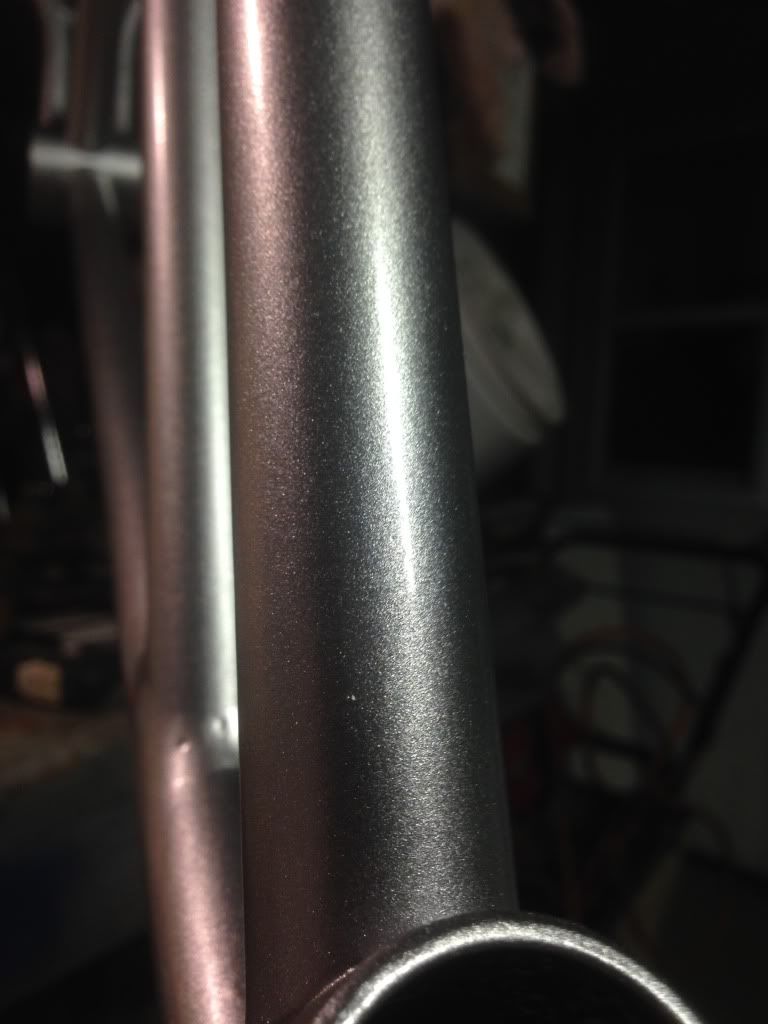 Here are the colors that I will be using for this build,

I will be masking off my scallops tomorrow, should have an update soon.
My feedback was higher than anyone else's on this website, trust me!!!

So here is a little back story for this build...

Last year, I built up my favorite bike that I had ever built. It was a 1949 Shelby Frame with an airflow springer fork that I built up as a 26'' muscle bike. I stripped the frame and fork down to bare metal and patina'd it with some Sculpt NEvoaue Japanese Brown. I had some tall apes that I painted black, and some cool tires that I bought from bontrager. What made the bike pop was my seat that I uphoalstered using a mexican blanket. It was brown, tan and black. I later updated the blanket to a red pattern.

Well anyways, that bike ended up getting stolen a few months back, was zoo depressed, I searched around town day and night for weeks after it was stolen. I missed it, and that is why I wanted another bike with apes and a nanner, because I needed to replace the one that was tolen from me.

Here are some pics of that bike. 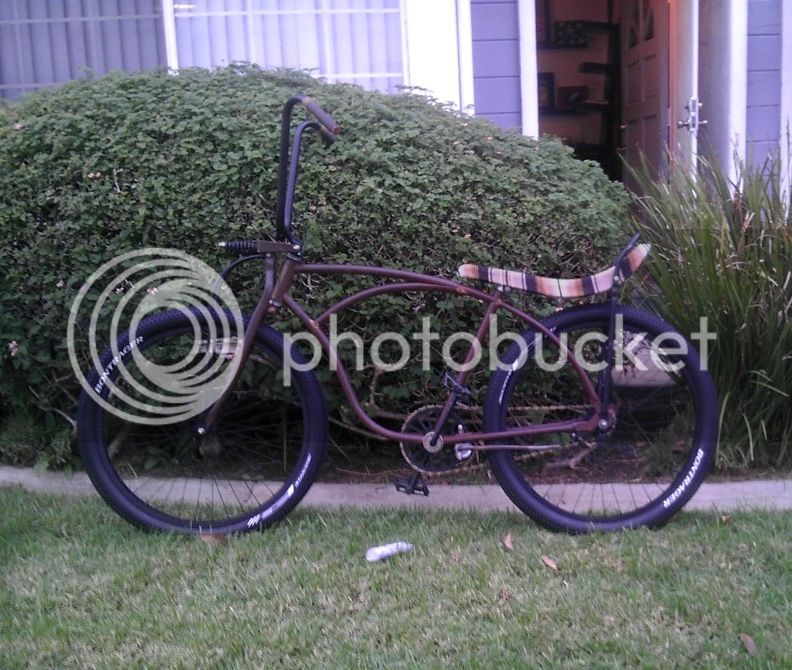 Some shots with the newer seat and Elvis figurine, I was planning on adding some subtle black and red scallops to the frame, hence the red seat and mini keg... I need a muscle bike back in my stable, and this one that I am building is the replacement.

Love that silver!
Shame someone stole your last bike, it was very cool! At least you have the chance to build another!

Bike thieves suck. I had a $2,500 Tri race bike stolen out of my garage a couple years back. I haven't raced a Tri since.

Here's a story that will make you smile...

Some quick updates. I wanted to tie the frame in with the seat, I taped of some simple points and layed down some apple red. Really loving the contrast. Next step, lacing up my wheels.

Thanks Luke, was a bit worried because I eyeballed it, but I think it came out pretty good.

I'm still contemplating whether or not to lay some out on the rear part of the frame.
My feedback was higher than anyone else's on this website, trust me!!!

I'm really lagging on this thing.

Getting these hoops laced up is starting to get annoying. I pulled the spokes out earlier and saw just how rough they were. I'm not so sure that I want to use them anymore. They are pretty bent and some are canked pretty bad. I called around some of my local bike shops and got some prices. Cheapest place charged 60 cents per spoke/nipple. I'm thinking of buying a brand new set.

But other than that, I need to wet sand the red on my frame and then shoot se clear coat.
My feedback was higher than anyone else's on this website, trust me!!!

I get my spokes from Robert at Wheels-by-Fleming. He's really helpful and his prices are fantastic for custom cut spokes. He even does black.


CRASH said:
I get my spokes from Robert at Wheels-by-Fleming. He's really helpful and his prices are fantastic for custom cut spokes. He even does black.

Thanks crash, I'll keep this saved for another time.

I had about 100 uncut spokes that I kind of bartered at my local bike shop, they were stainless, I traded those for black spokes, cut and threaded to size. Cost me 20$, was happy with the trade.
My feedback was higher than anyone else's on this website, trust me!!!

I got my spokes today, I laced up my wheels in no time. I swear the front wheel was almost true just by lacing it, it only needed a handful of adjustments. The back wheel took a bit longer but it still didn't take too long. I'm going to be drawing on two stripes on the rear wheel, like I did in the front, I called it a quits for the day though, some days I can work on bikes all day, and other days I can only handle an hour or two.