Rating - 100%
6   0   0
Welcome to the Rat / Rod Model Kit Bash II ! Last year we had so much fun with the innaugural version of this Build Challenge, that there was no way we couldn't follow it up with Version II !

I'm so stoked that the thread from last year continued with momentum throughout the whole year, with 36 pages and over 700 comments and posts! We had a strong group of builders, with some very creative builds last season. Can't wait to see who and what we get this season!!

The rules are few and pretty easy. The idea is that you take two or more disimilar model kits and 'bash' them together to form a new and crazy creation of it's own. You can use parts from kits, scratch build parts of your own, or 'rat rod ' it by using items for which model building is not normally intended.

The official Rat / Rod Model Kit Bash ( RRMKB ) Challenge will officially begin October 15 and run till December 15. We will have a week of voting on the finished projects, and be all 'wrapped up' by Christmas.
( yes, I worked a holiday pun in there; get used to it!)

All the builders will post their builds on this one thread. To keep them more defined and so others will know when you are making a new post about your build, and not just commenting, start it off with the name of your build in all caps, and bold too, if you can. Followed by your builder name. Like this:

My kit bash build this year will be based around the Weird oHs model kit Huey's Hut Rod, and another hot rod car model yet to be determined.
Expect a lot of 'outhouse' humor and some wacky fun as I relive my childhood days of building Weird oHs and other models in my upstairs attic bedroom. Let the Testor's fumes begin! 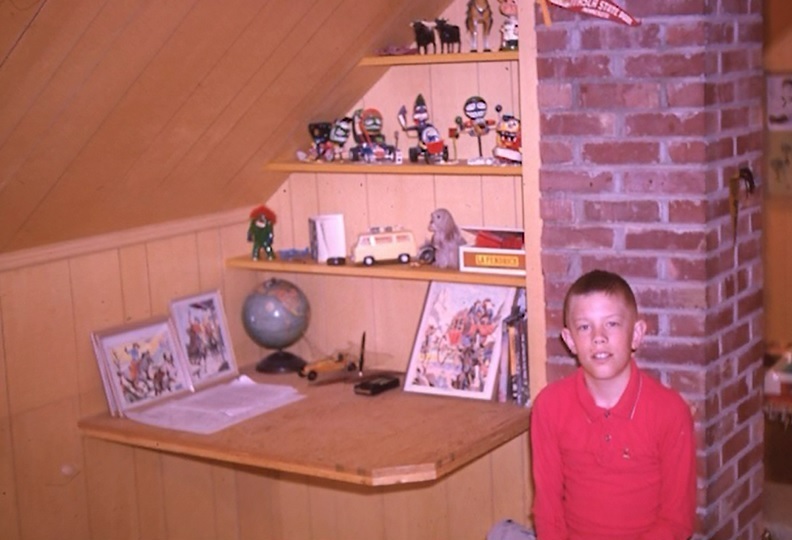 Rating - 100%
63   0   0
thanks a bunch for organizing this. I'm in again this year and really looking forward to it.
"It’s kind’a tough to grow old when your feet are sitting on a pedal!" -ZigoteLittle (RIP)
search eBay user ijt64 for Made in USA Thompson Classic ball end grips and coke bottle grips 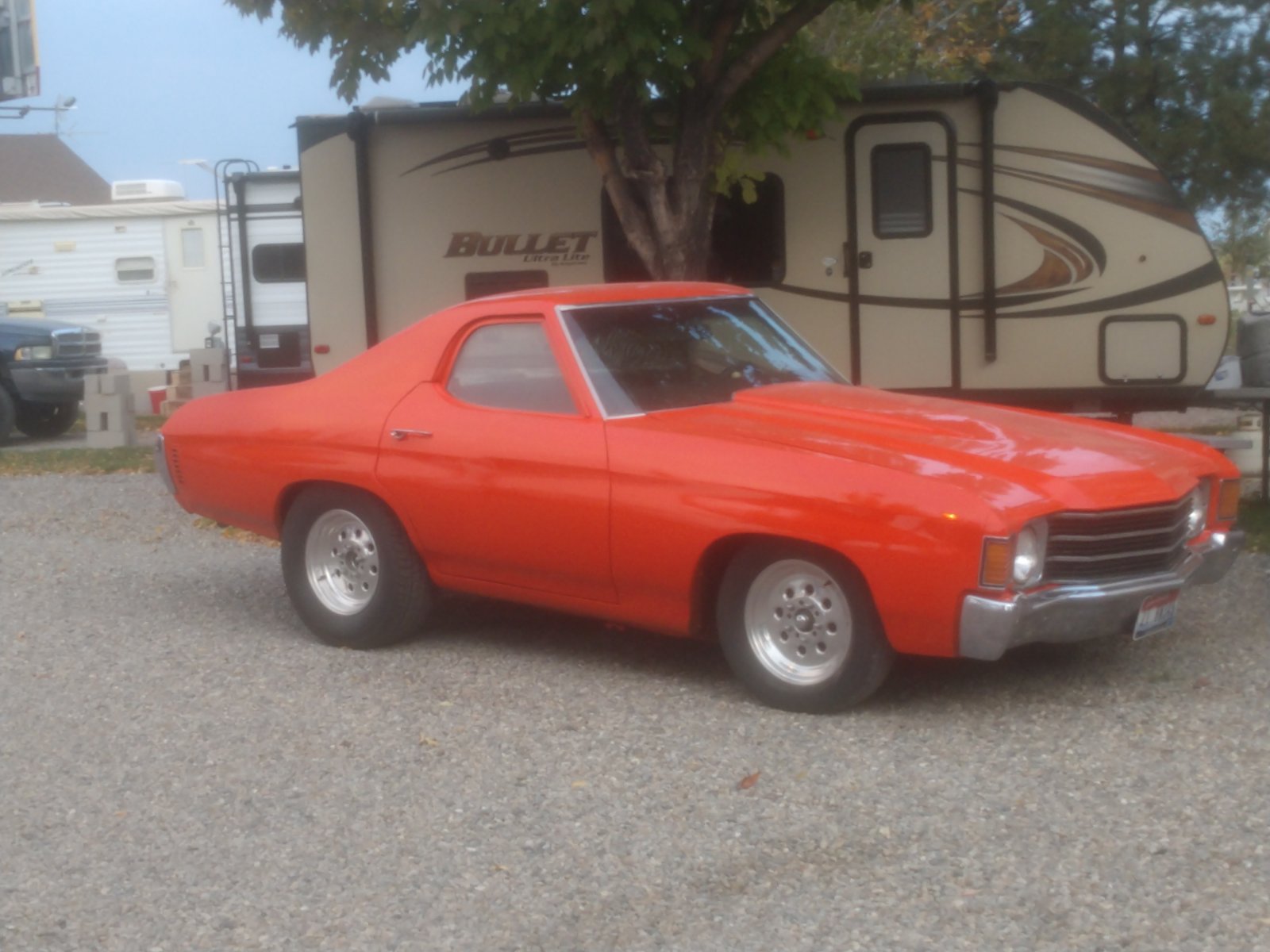 kingfish254 said:
It would even cooler if it was an El Chevellemino in the back.
Click to expand... 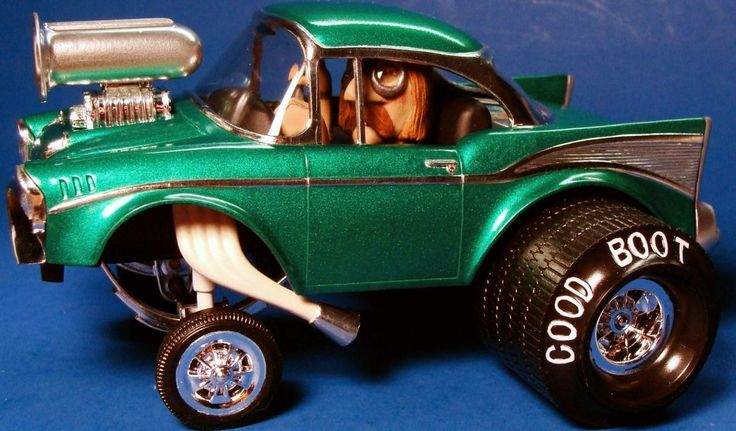 Gathering parts for my build. Feel free to get your parts list, build ideas, build name, etc started here on the RAT/ROD MODEL KIT BASH II thread. We are only a week out from the official start! Good time to get the momentum rolling!

The other half of my kit bash, a 1950 Chevy truck. Of course, this will be modified. 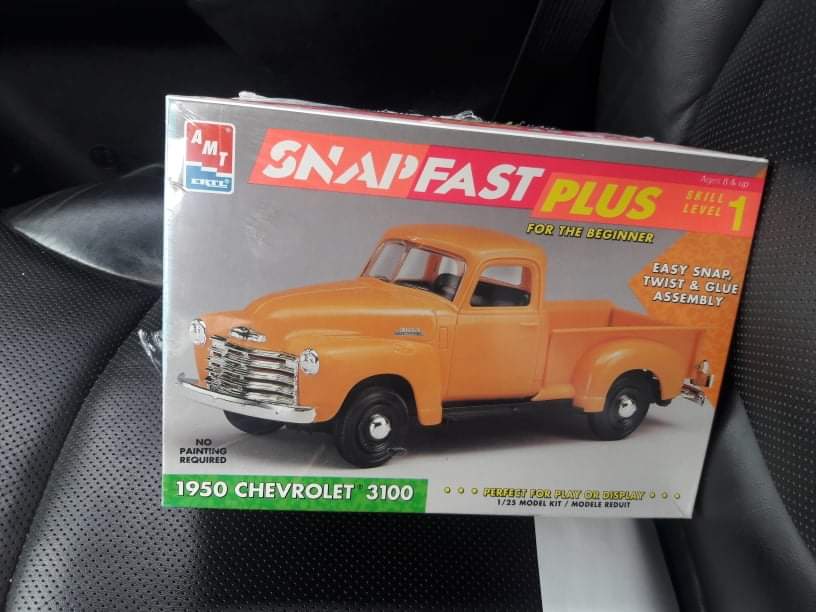 And, this little guy I found at Goodwill on my way to drive school bus yesterday. 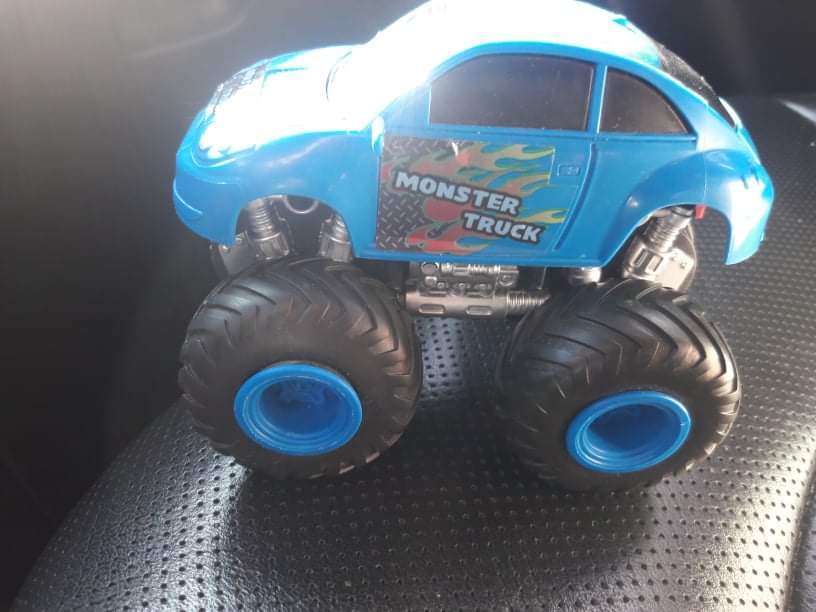 Rating - 100%
1   0   0
Here's my idea off the top. These are hulls for the boat I designed. I built several of each. I originally was going to build the smaller one, but wanted something with more deadrise to at least handle the harbor (foreground). I'll use one of these. I'll either have a giant ground sloth or oversized Bradypus racing it in reference to the books I'm working on now. 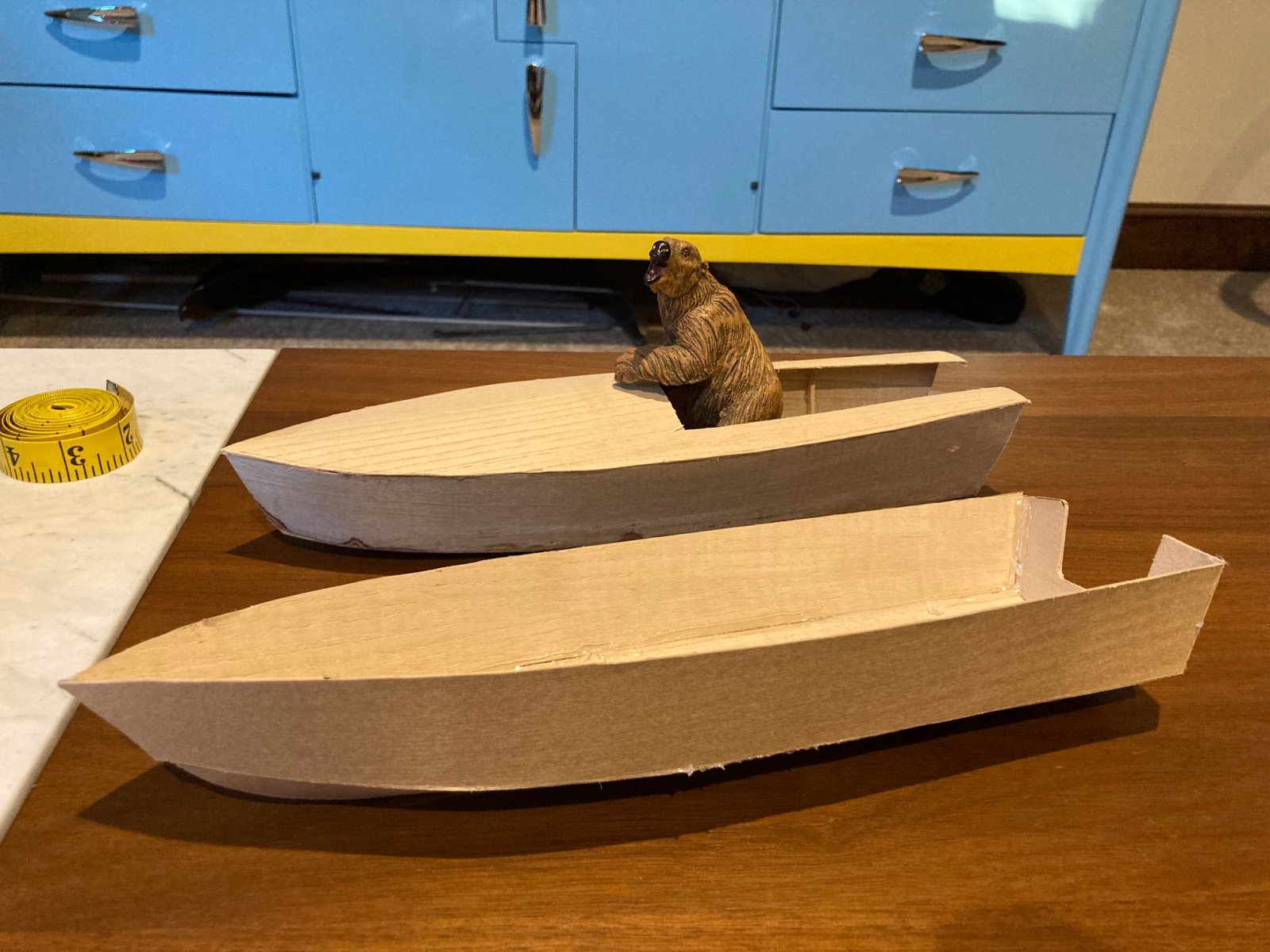 So cool. It also looks lie a shortened 1972 Elcamino. I want that car!

OddJob said:
@Verrt and others, hope you will join in the fun this year!
Click to expand...

Verrt said:
I only have one "model" type project on the books right now, and I'm not sure if it fits the scope of the mash up bash.

I'll describe it here and let the the brains trust decide if it's an acceptable entry, with OJ having the final say. It's not totally a mash up, but will require a lot of modifying, making, and 1/10th scale rat rodding.

So, I want to take the two RC cars I posted earlier in this thread (already my starting point could be contentious), and I want to add laser tag to them!

About a decade ago my wife and I bought two "RC battle cars" off the shelf at I think walmart. They were great fun, two mad max/death race looking cars each with an IR emitter in the front, and and IR receiver in the back, plus three LEDs to keep track of hits. The aim being to get behind the other car and tag them with your IR emitter three times.
They were great, but the fun all ended when one got driven through a puddle and never worked again.

So we got the idea to take hobby grade RC buggies that can stand up to the puddles, jumps, and head on collisions that the last ones couldn't.
Then add on the IR combat elements, model weapons, LEDs, sound effects, etc.
This will involve making and programing the electronics, mounting them in the cars, then using model making skills to hide them and make it look like the little model guns are doing the actual shooting.

I've already built and painted the buggies (and then broken mine), as shown in my earlier post, but haven't started on any of the IR stuff or adding on weapons.

Let me know the consensus if this is an acceptable entry. No worries if it's not, I can still post updates in this thread if people are interested.
Click to expand... 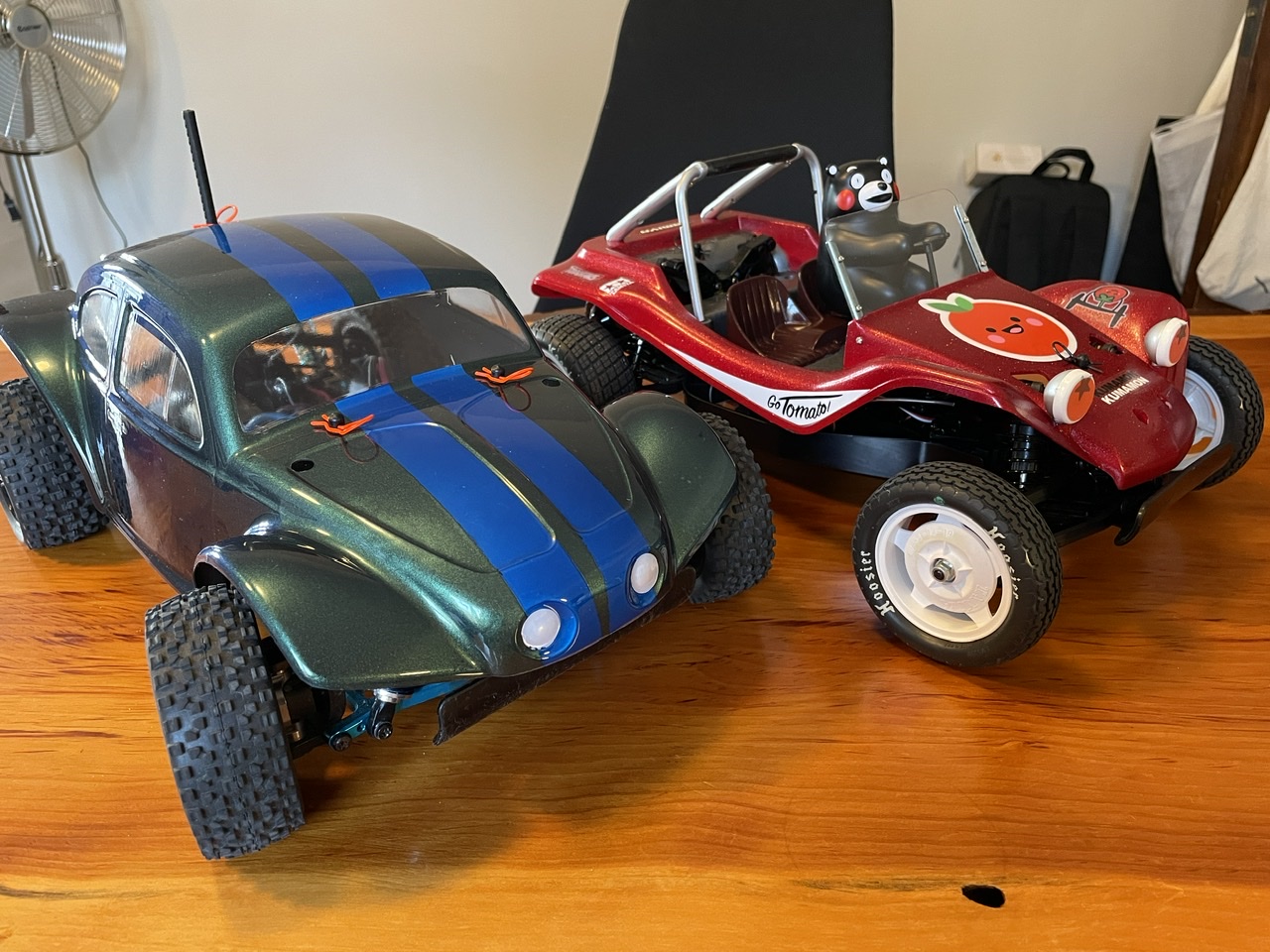 OddJob said:
Hey Verrt and duchess, make sure you post in this year's new thread, not this one which is from last Fall's Model Kit Bash. See my comment #712, 3 above this one for the link.
Click to expand...

Reposting from the other thread, as instructed.

Let me know if this fits the scope.

Rating - 100%
6   0   0
I'm good with it. Blending more than one 'kit', adding in scratch built and other parts, creating something new and likely 'whimsical' as a result. That was what I had in mind for this Challenge from the start.
2019 Builds in RRB Build-Offs:
" Helen Wheels" " Trans-MIG- RaT " " RaTsberry Buffet"
R

kingfish254 said:
That Chevy does have the squished look of a Deal's Wheels model.

Is it Cool Boot or Good Boot? I can hear the tires burnin' rubber and the engine roaring! Give it to me! 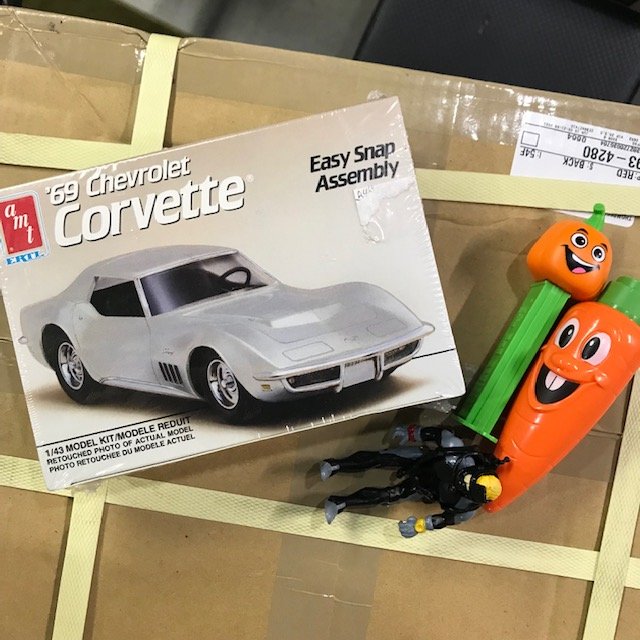 "It’s kind’a tough to grow old when your feet are sitting on a pedal!" -ZigoteLittle (RIP)
search eBay user ijt64 for Made in USA Thompson Classic ball end grips and coke bottle grips

OddJob said:
ONLY 4 MORE DAYS TILL THE START OF THE RRMKB II ! YOU IN??!
Click to expand...

I'm excited to to earn another DNF for my trophy cabinet.

Verrt said:
I'm excited to to earn another DNF for my trophy cabinet.
Click to expand...

MBbo/ORbo coming up, you could dnf a few times this winter!

Your input around here has been missed
Bad puns:
That's how eye roll

MattiThundrrr said:
MBbo/ORbo coming up, you could dnf a few times this winter!
Click to expand...

I don't have any MBs or ORs to enter. I don't fake my DNFs, I work hard at them.


MattiThundrrr said:
Your input around here has been missed
Click to expand...

Just say my name five times in the mirror. Or tag me in a post, whatever.

looks done to me....
The idea behind a build off is that everyone competing builds at the same time. So as awesome as that truck is, it isn't eligible unless you're planning on blowing it apart and kitbashing it into something new.